The march to produce the entire back catalogue of at least the big 3 Chinese airlines continues with the aid of the impressive combined mould inventory of JC Wings and Gemini Jets. The month of May brings an example of another type overlooked for some time by the manufacturers – the British four engined 146, this time in the colours of China Eastern. As with a variety of regional types the BAe 146 served in small numbers for a decent timespan and to be honest China Eastern was not a major operator of it, but nonetheless the big three sell better than the more fitting China Northeast variant would so here it is.

The BAe 146 has always been something of an enigma to me. As with the prop DHC-7 it was originally designed as a regional airliner that had excellent short takeoff and landing (STOL) capabilities but developed into a more general purpose regional airliner. Certainly in the latter role it was perhaps a little unwieldy with four Avco Lycoming turboan engines rather than only two. During the 1970s, at the time it was developed, no engine was available that would have allowed the type to be twin engined and I guess at least this provided excellent redundancy in the event of engine failure.

Even with the seeming surplus of engines the BAe 146 proved popular both with airlines in need of a regional workhorse in the 70 seater range (like Dan Air London) and airlines with more specific requirements to operate in harsher conditions than offered by London Gatwick. Certainly the short undercarriage, high wing and T-tail all benefitted it operating in short field and more primitive circumstances.

China at the time was rapidly developing but no doubt still had many airports where the benefits of the BAe 146 would come in handy. The CAAC received 9 series 100s from late 1986 and three of these were incorporated into the fleet of Xian based China Northwest Airlines. They were joined in February 1992 by the first of 8 new stretched BAe 146-300s.

The BAe 146 was rugged but not rugged enough to survive everything that China’s inexperienced pilots and poor infrastructure could throw at it, and unfortunately only just over a year after the first entered service one of the 146-300s was lost. On July 23, 1993 B-2716 was destroyed when attempting takeoff from Yinchuan with 113 people aboard. The pilot took off with the wrong flap settings and the aircraft failed to gain enough lift to rotate. Instead of aborting the pilot pulled the nose up causing the tail to strike the runway and the aircraft eventually ran out of runway and impacted an earth bank ending up in shallow water. Fifty five passengers and a crew member were killed.

Fortunately the rest of the 146s had less noteworthy careers and they joined the fleet of China Eastern in 2003 when it tookover China Northwest in the big combination which saw a reduction in the ex-CAAC components to just three. The BAe 146s were by this time nearing the end of their service and even the relatively new series 300s saw only short service with China Eastern. This aircraft, B-2712, appears to have operated the last service on December 31, 2004. So ended 18 years of BAe 146 service in China and began a period of long storage for the remaining airframes. Only two have seen further service being sold on to Mahan Air of Iran. These include this aircraft, which is now EP-MOB.

Despite being a Gemini Jets release this model does not actually use a Gemini mould, in fact it doesn’t even technically use a JC Wings one since this mould was originally made for Jet-X. JC Wings has done a substantial amount of mould purchasing and that apparently includes Jet-X’s old moulds too. This is something of a shame as Gemini’s BAe 146 mould is excellent, if something of a tail sitter I admit, however it appears Gemini never had a long 146 mould anyway.

The nose region of this mould is ok but I have always thought the angle of the area above the cockpit isn’t round enough. The nosegear is also very simple and the tyre slightly too large. Overall the Gemini mould has a better nosecone.

One of the most obvious elements of the mould is that it is a reverse cradle with the wings forming a separate piece attached to the top of the fuselage. It is ok but the fit is a little unwieldy especially at the front where the seam is rather raised. The Gemini mould again has a better seam in my opinion. The rest of the wings and fuselage is good although I can’t help but note that the maingear tyres are ironically a little small.

The engine pylons and nacelles are adequate but the angle of the pylons at their front is not quite correct. Overall this mould gives a decent impression of the little ‘four holer’ but it isn’t without a collection of minor issues, none of which stop me from purchasing it but do cost it some points.

This aircraft was still wearing the blue and red livery of China Northwest into November 2003 and so must have worn the blue, gold and red of China Eastern for only about a year operationally. Nowadays the old China Eastern scheme is more liked than it ever was when it was in service primarily due to the opprobrium that the new China Eastern livery garners. It was always quite a smart scheme and must nowadays be one of the commonest made in 1:400 scale.

I have no complaints about the colours being used here they are perfectly acceptable. In fact the livery is applied well across the board too except towards the nose. Jet-X always seemed to print slightly odd cockpit windows on their 146s and Gemini here have done so too. This impacts the cheatlines at the nose, which ought to be straight until the cockpit and then curve gently downwards. The position of the cockpit here means the cheatline doesn’t get to curve down as much as it ought to but it isn’t a major problem I admit.

One other issue is that the colour of the central wing area appears a light grey when it should be white like the rest of the fuselage, presumably because it was painted separately being a separate piece. In general this is a good representation of the MU scheme and certainly the rest of the scheme is exemplary.

This is a solid little mould, without aerials, and consisting of only a few pieces. As such construction is very good with even all the wheels rolling well. As I have already mentioned the fit of the wing seam on the fuselage roof has a notable lip but I think this is mould rather than model related so I won’t subtract any points for it in this section. 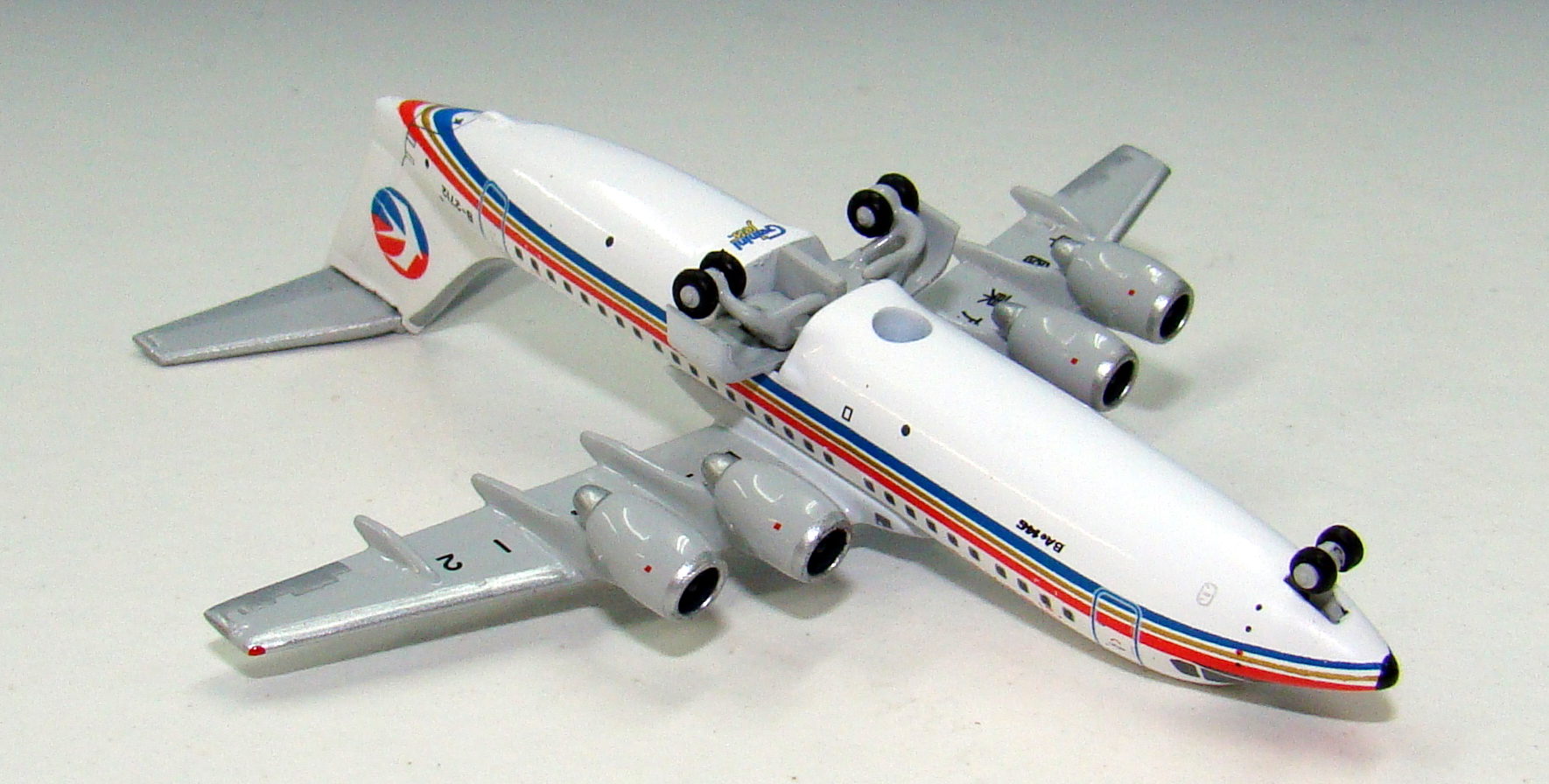 The printing quality of the model is high with very thinly detailed titles on the fuselage and both sides of the wings. Other details like the starboard side APU are also nicely presented although I would much rather prefer that the upper side of the split cone tail airbrake was printed as the other boundaries of it are.

Pleasingly the engine fanblades have been painted a dark grey showing manufacturers like Aeroclassics that it really isn’t too hard to do something about the common problem of bright silver engines.

The only printing I really have an issue with are the aforementioned cockpit windows. They could perhaps be slightly higher but it is the central windows that are most at fault. They seem to curve downwards towards their centre when on the real thing they are almost flat across the top. The model isn’t too heavily impacted by the cockpit but from some angles it bugs me a little.

In one respect it is a shame that often we only see many moulds of the voluminous JC Wings catalogue when representing Chinese airliners. After all there are plenty of BAe 146s that remain to be made for European operators (Dan Air – hello!!!). However I admit to being a big fan of these retro-Chinese releases and this is another little gem to add to the fleet.

I have not been very happy with Gemini Jets for some time, however credit where it is due they have recently been dabbling in a more diverse set of offerings with at least one release […]