Widebody airliners garner significantly more interest in 1:400 scale than narrowbodies, especially if they are not completely modern, which unbelievably nowadays the 737 Next generation series isn’t. Even so it is far from a classic and given the relatively low investment of modifying one of the many existing 737-700 or 800 series moulds into a 600 it is surprising that nobody has done so before now. Herpa have been the only manufacturer that have made a 737-600 and their mould, which they used only three times anyway, is ugly. Until the recent NG Models 737-800 Panda have had the best NG mould so it is good to see them stretch to the series 600 too.

Obviously, this number compares very poorly with the sale of 1,128 737-700s. Interestingly the 737 MAX-7 is now facing the same issue when compared to the 737 MAX-8. The series 600 was only 8 ft shorter than the series 700 but had the impressive range characteristics of the NG family but nevertheless struggled to find a broad niche.

This was due to several reasons. Firstly, the operating costs of the 600 are very close to the 700 meaning that there were limited times when it made more sense to operate the former over the latter. Secondly, it was often competing against relatively new 737-500s, which were substantially lighter than the beefed-up NG airframe even of the 600. Thirdly the market in the late 90s was becoming flooded with regional jets, which had cannibalised the former 737-200 size range.

Despite these issues R&D for the 737-600 was very low since it used elements of the 737-500 and 737-700 and it provided a useful spoiler to airlines thinking of ordering MD-95s (later the 717). The launch customer, and largest operator of the type, SAS was a classic example of this choosing the 600 over the MD-95 partly because of commonality with ordered 737-800s.

China Southwest was an existing 737NG operator that chose the 737-600, acquiring three aircraft in mid-late 2001. B-2155 was the first, joining the fleet on July 24. The airline fell foul of the consolidation of the Chinese airline scene in 2003 and was merged into Air China, which subsequently took a further 3 737-600s presumably ordered by China Southwest. All six airframes were sold to EG&G in 2008/09 who undertake the famous ‘Janet’ flights from Las Vegas to US Air Force facilities. The operator was renamed URS Federal Services in 2010 and bought out by AECOM in 2014. B-2155, now reregistered as N319BD remains in operation. 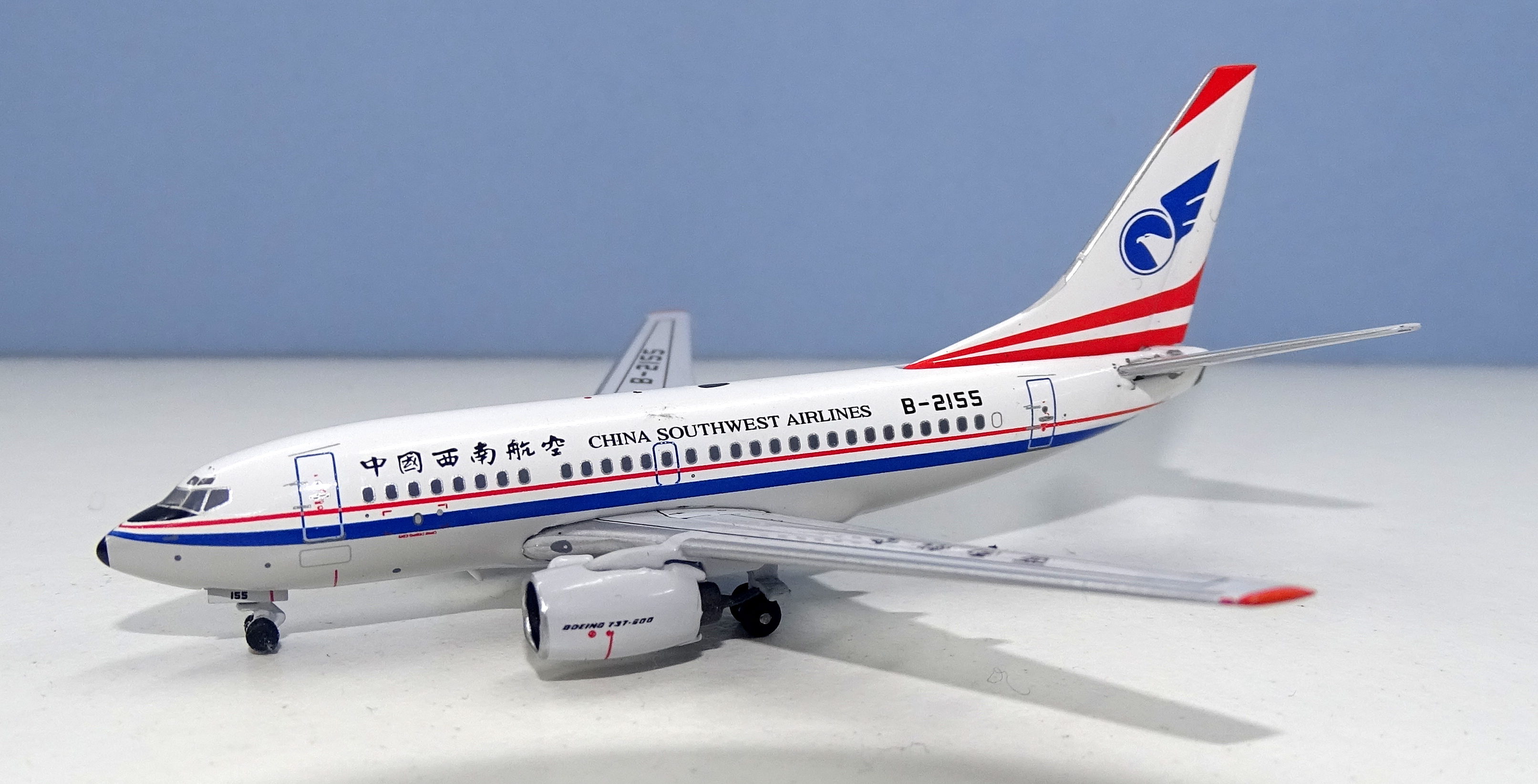 I’m a big fan of the Panda 737NG mould and have built my collection of 737NGs around it, which makes it all the better that there are series 600-800 versions, albeit Panda have just retired the 737-800 due to competition with NG Models new mould. 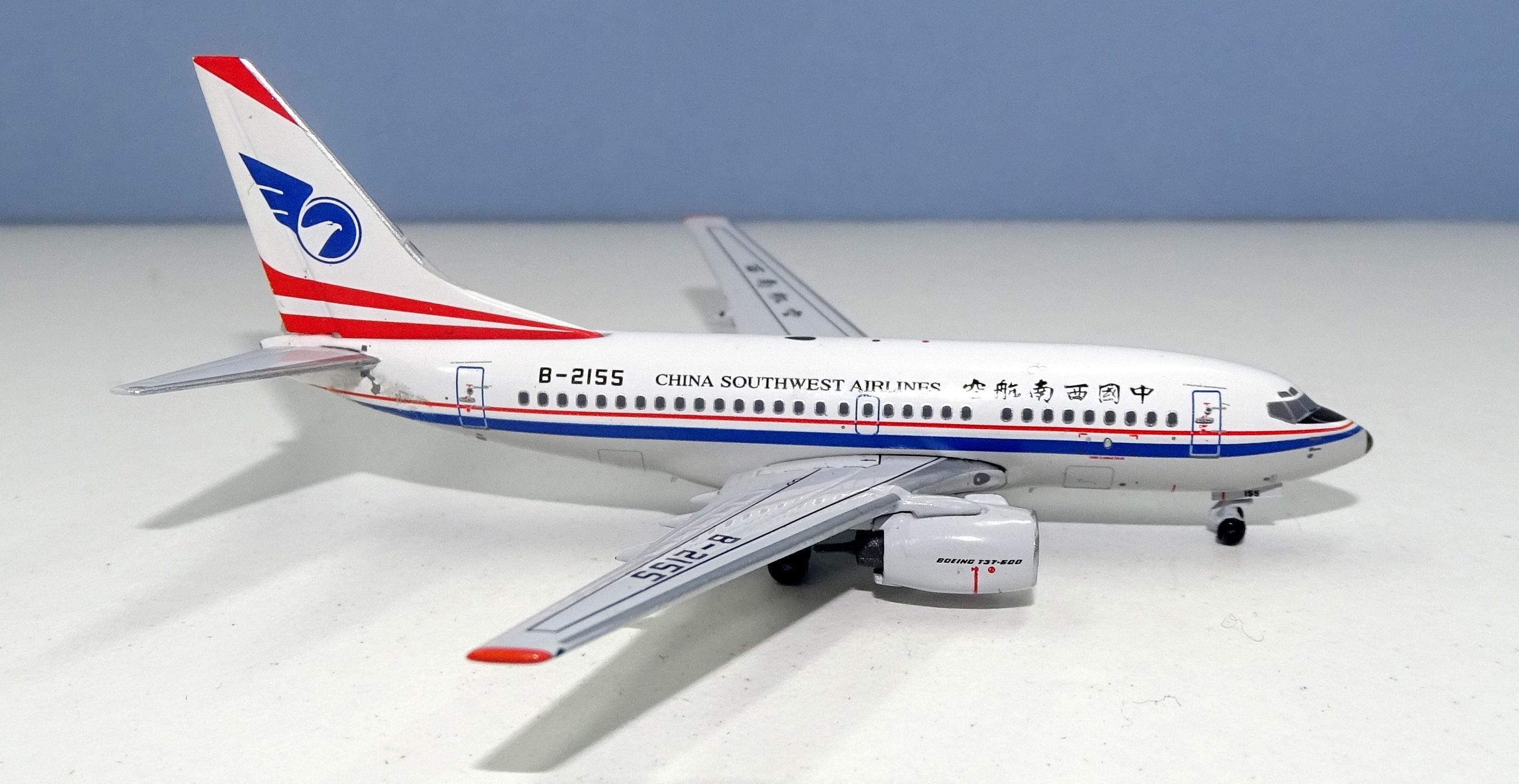 For me the shape of the fuselage is exemplary. I have heard people criticize the angles from the cockpit down to the nose but aside from the NG Models mould it is easily the best in this scale. The wings are one of the best areas of the mould and as you’d expect they reuse those of the 737-700, as does the tail.

That isn’t to say the mould is faultless as the undercarriage is the mould’s weakness. The nosegear is actually well scaled but the gear doors are too heavily buried in the fuselage and the nosegear tyres are simple tyres on spigots with no hubs.

The maingear also has issues as it is too straight and the gear doors are too long. In essence however this is a good mould and the landing gear issues are not major in the grand scheme of things. 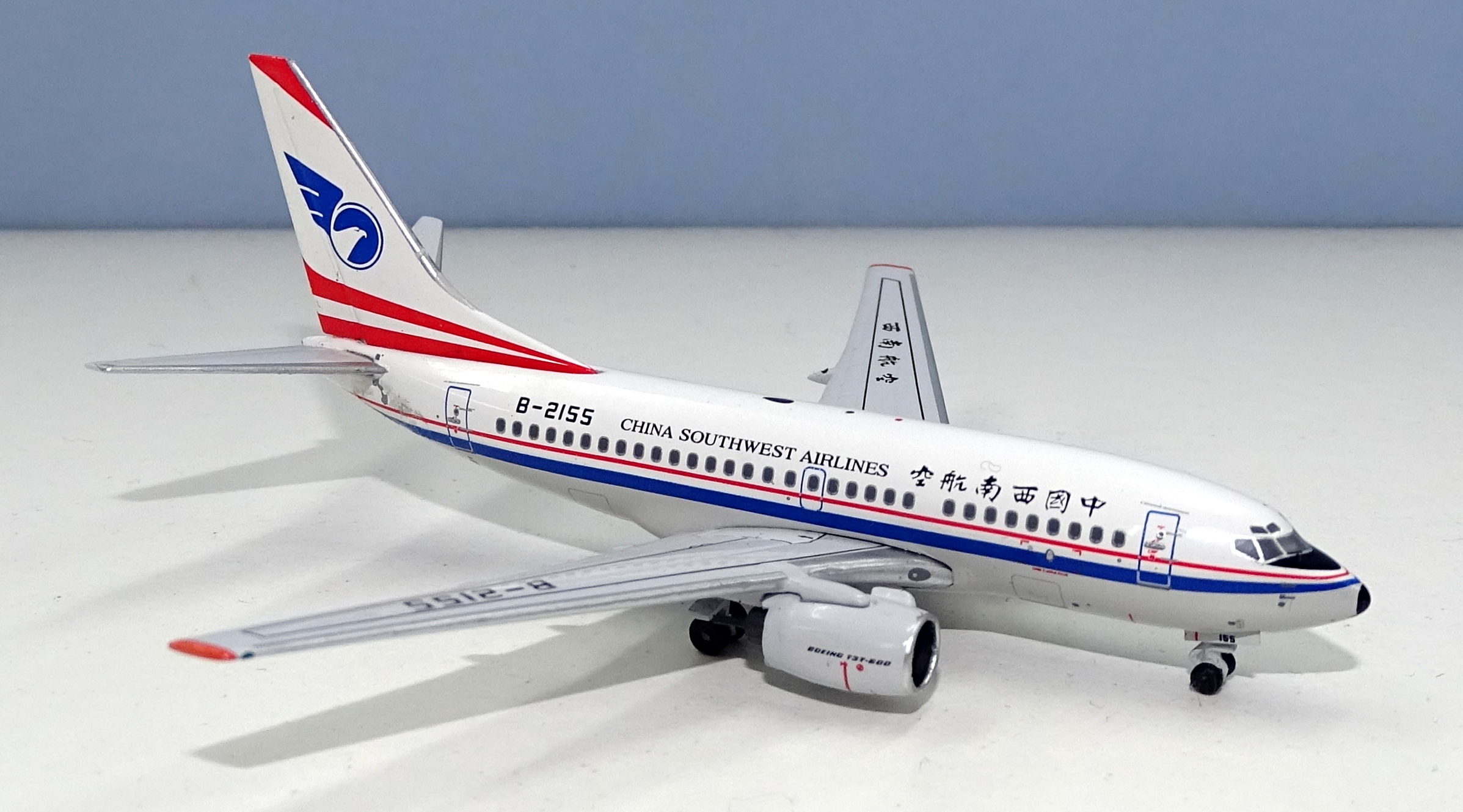 The China Southwest livery was one of the more colourful original schemes from Chinese airlines and has a rather typical early 90s look complete with cheatlines. I think it remains quite an attractive scheme using red and dark blue as its main colours. 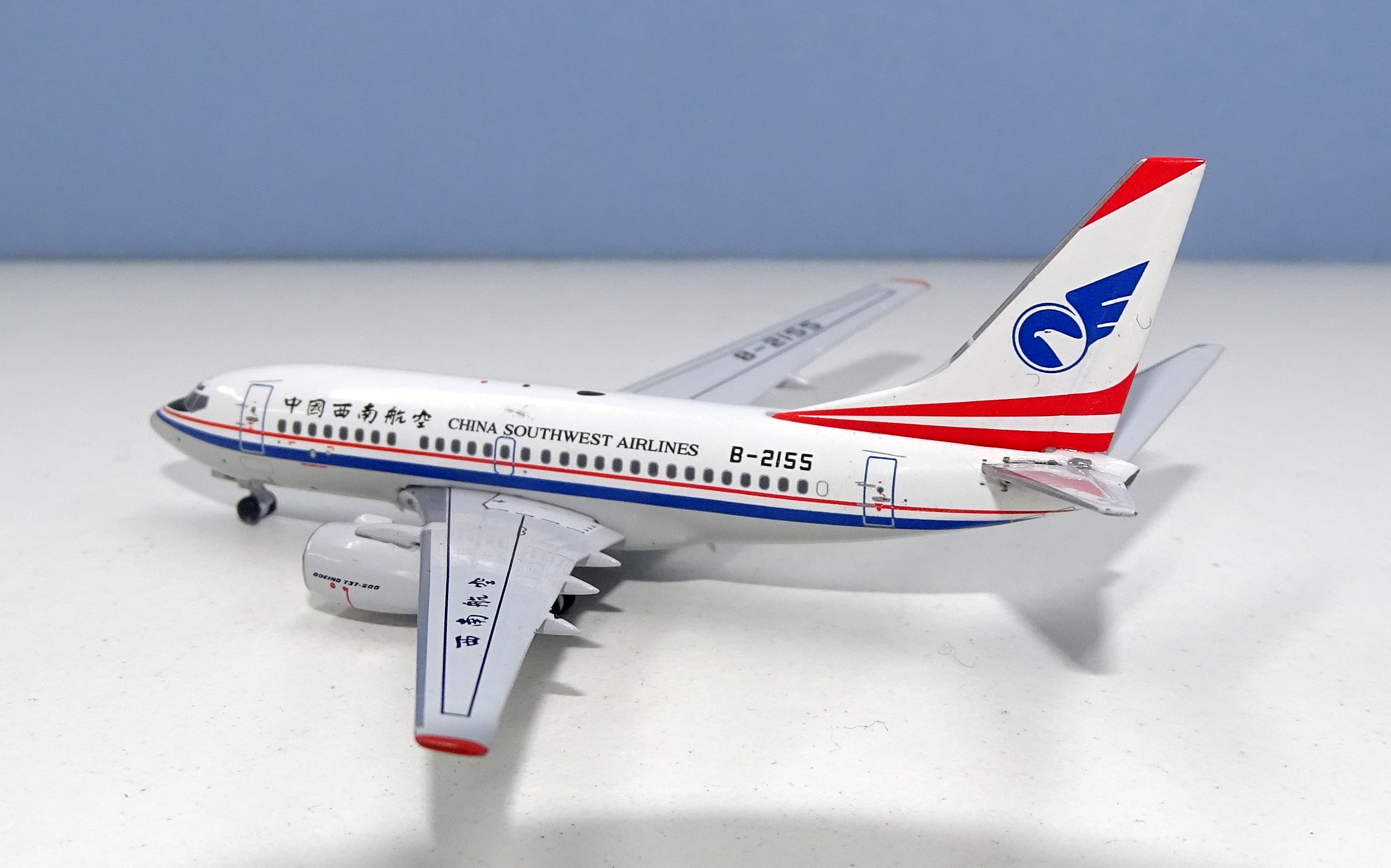 Panda have no issue with the colour shades being used. The placement of the eagle head motif with wing on the tail is good as are the red stripes. The cheatlines are also well placed but the thin red pinstripe is a little too thin. 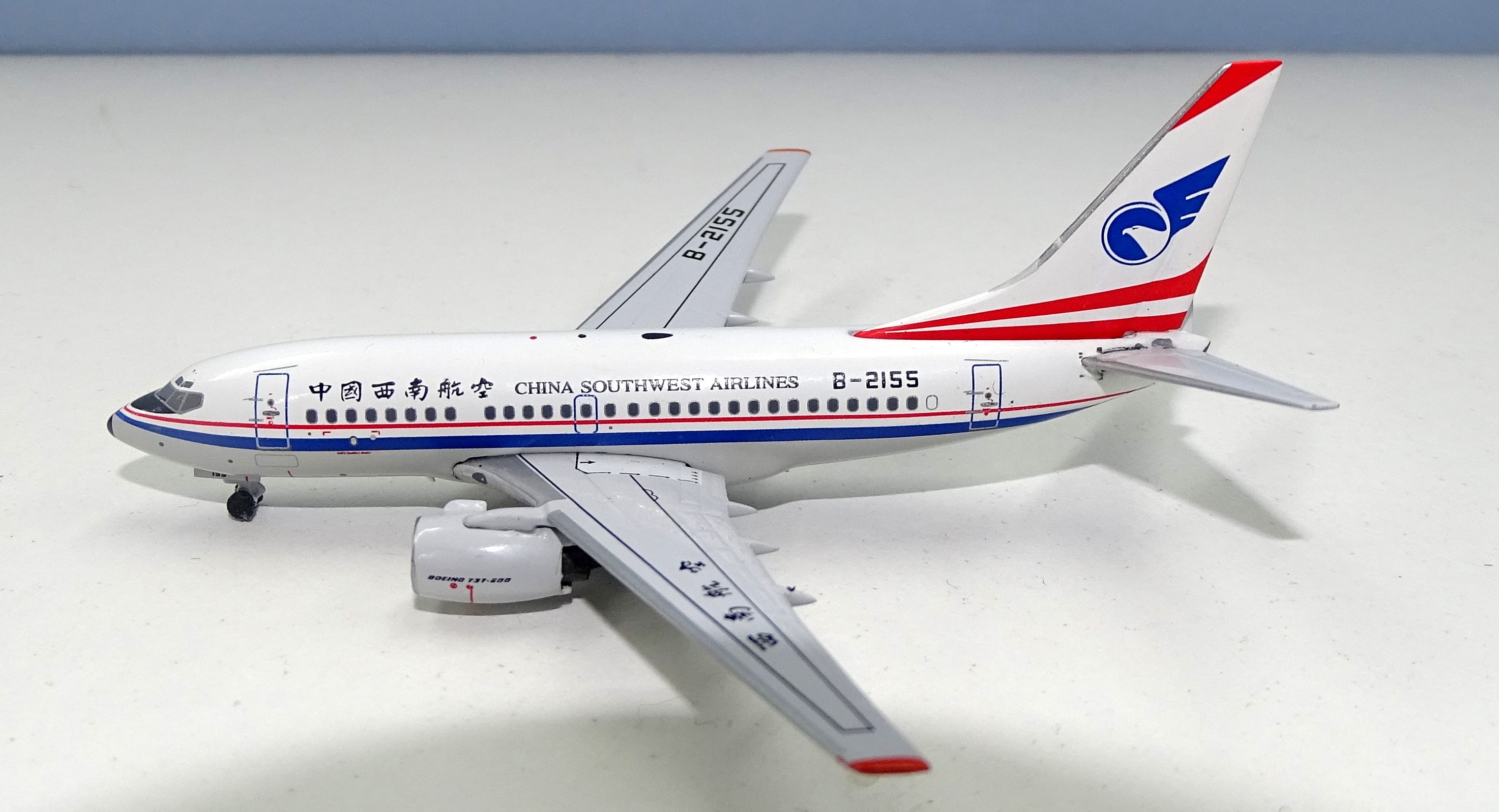 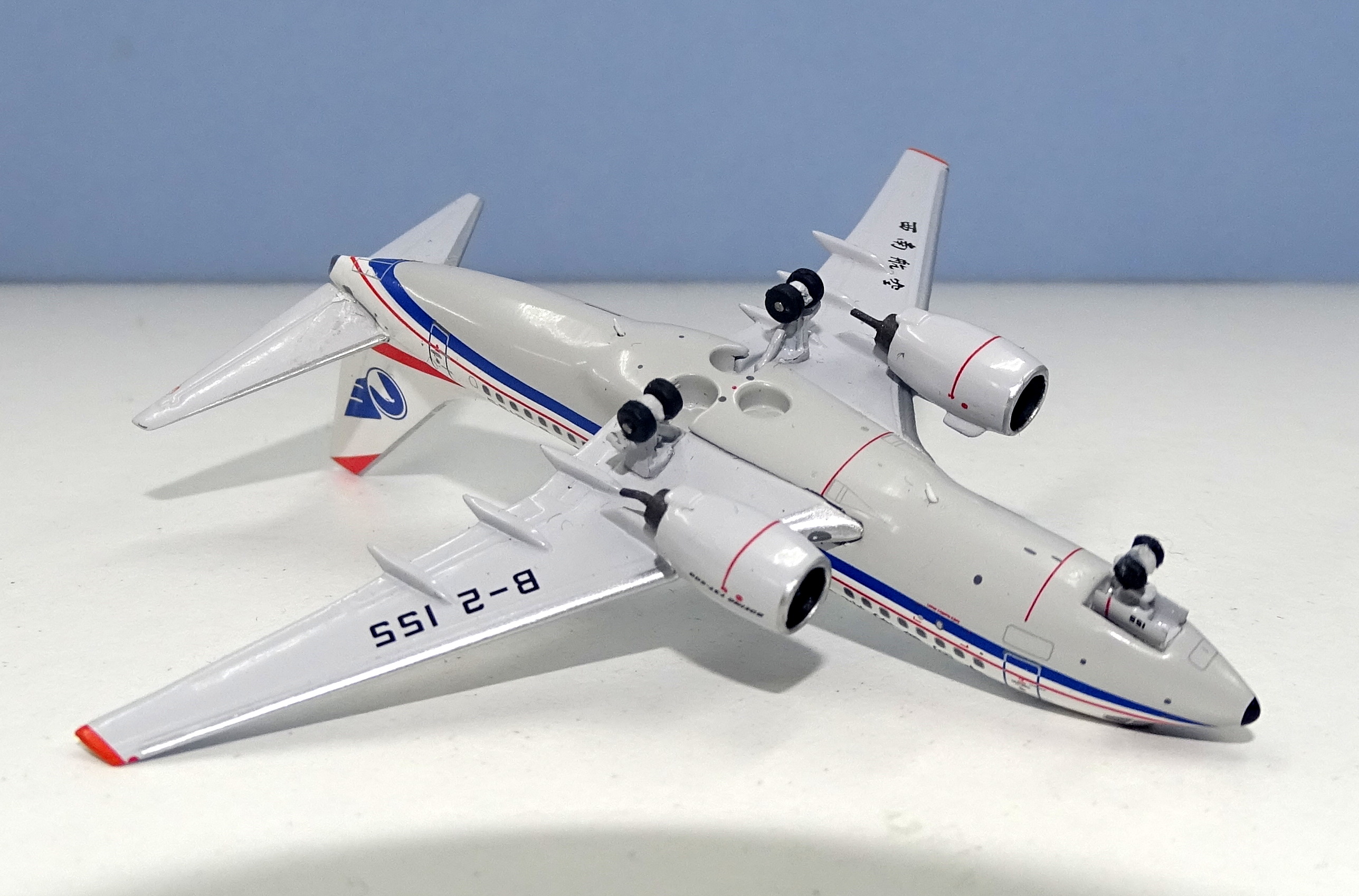 Panda knows how to print to a high level of detail and I can find no complaints in this area. It is a shame though that build quality is unusually poor with this model. 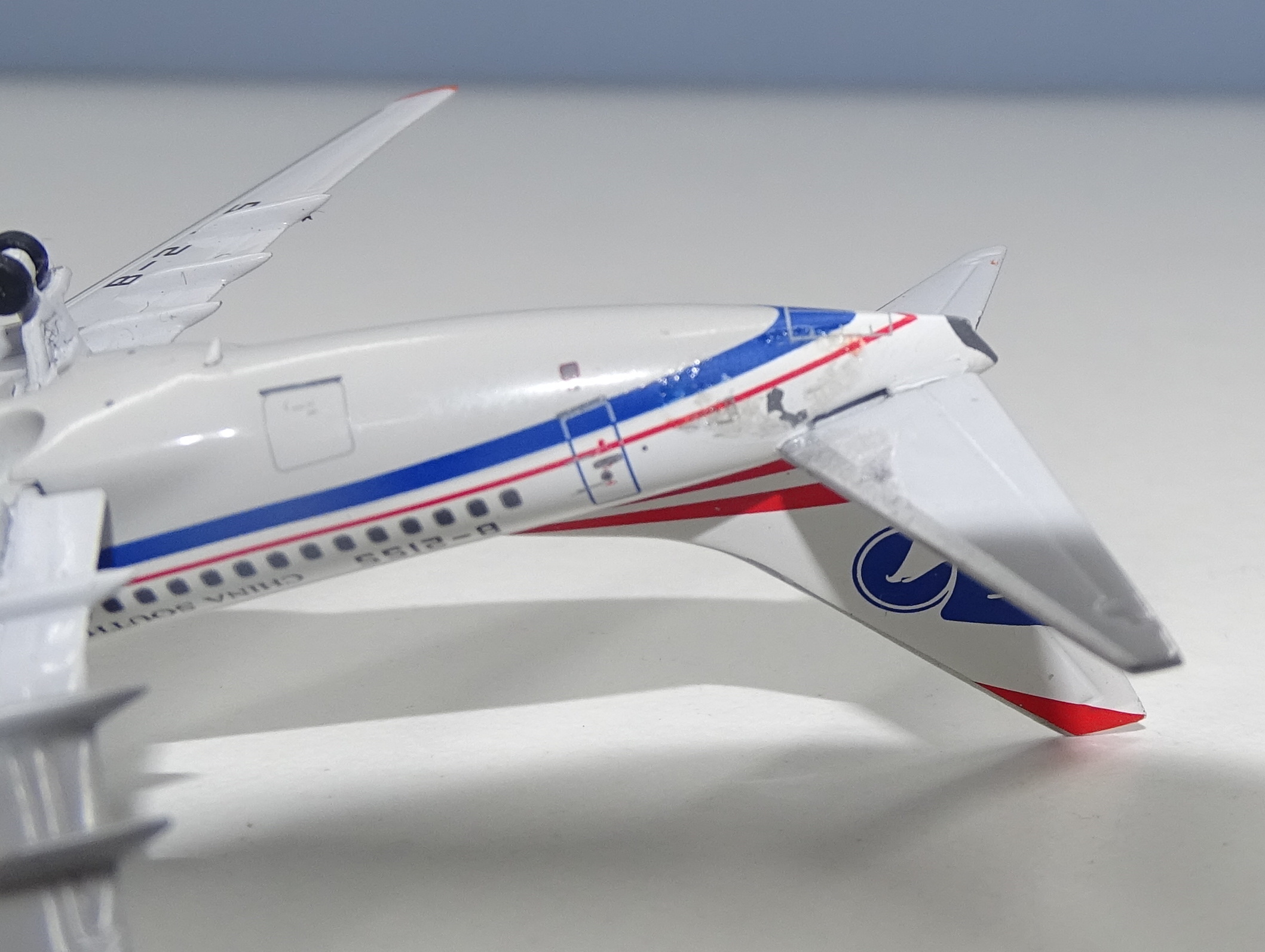 At first glance you might mistake this for cradle rash but it is worse than that – it rather looks like it has been through the wars. On the port-side there is a paint chip where the horizontal stabilizer has been attached poorly but this far eclipsed by the mess on the starboard side. Here it looks like a fingerprint has contacted the model when the paint was still wet. Not only has this caused scuffing but also some paint loss. Fortunately, it is under the stabilizer so is less noticeable.

Additionally, the model is missing the aerial, which should be attached on the top of the fuselage (the two underneath are present and correct). Plus, the left-side engine exhaust nozzle is bent out of shape. This is easily the worst finished Panda Model that I have ever received and not a reflection of the majority of their models, nonetheless I am not impressed about such laissez faire build quality.

I was very glad to see Panda make a 737-600, and still think the main reason they did was because there had been Chinese operators. With four examples from China out of the way and 6 other models made Panda does seem to have rather lost interest in the type. I hope they reconsider and we see more 737-600s as there have only been 4 distinct airlines made so far and the mould is delightful. Having said all that this model is ultimately a disappointment because of sloppy build quality, which I hope is not something that starts becoming more common on Panda models.

Alas our notorious UK weather did not allow many outings, so I decided to concentrate on the central terminal area and reproduced several features I could see on photos and recalled during my visits, which […]