NG Models have shaken up the mainstream 1:400 manufacturers to the extent that they have gone on the attack, either by trying to block their sale or by attacking positive reviews. The simple fact of the matter is that from a quality perspective they are simply top of the pile, both in terms of mould design and printing quality. Recent NG mould additions have brought them into stronger competition and one of these is the 737-800, which has already seemingly led to Panda retiring their 737, which was the best on the market. If they continue to produce good models they will get good reviews from myself and this 737 gives a nice comparison with last week’s JC Wings example.

The big three Chinese majors are in some ways more agglomerations of several airlines, partly because they each have their own separate subsidiaries (which are often major airlines in their own right) but also because even within their own brands regional offices appear to have significant independence. One of these operations is China Southern Airlines Guizhou Company.

Guizhou is a land-locked province in the southwest of the country, rich in natural cultural and environmental resources but also relatively poor and under-developed. Due to this it is presently a focus of the Chinese government’s economic development.

The capital of the province is Guiyang, a city of nearly 5 million serviced by Guiyang Longdongbao International Airport. This airport is just outside the top 20 busiest in China and the largest airline presence is that of China Southern, although several other operators, most noticeably Colorful Guizhou Airlines, also have significant presences.

China Southern Airlines Guizhou Company operates 18 Boeing 737-800s and has its roots from the formerly semi-independent Guizhou Airlines, which was merged into CZ in 1998. On January 10, 2019 the branch received a new 737-800 that not only enables its own expansion but also acts as a business card for Guizhou.

The aircraft, B-6068, is configured in a 164 seat 3-class configuration (8 First-class, 24 Premium economy and 132 economy) and is painted in a special ‘wax painting’ style livery celebrating Guizhou province. Painting the aircraft began on December 25, 2018 and took 32 staff two weeks to complete. It is designed to act as an air ambassador to assist in the promotion of Guizhou as a tourist destination.

There is absolutely no contest when it comes to this being far and away the best 737-800 ever made in 1:400 scale. The most difficult areas for all the existing moulds have been the cockpit/nosecone and the engines/engine pylons. The NG mould has a beautiful and accurate transition from cockpit to nose perfectly capturing the classic traditional Boeing shape.

Even more impressive is the nosegear. The tyre and gear leg are well detailed and proportioned whilst the nosegear doors are a hallmark of attention to detail. Unlike most of the moulds, which have large rectangular slabs, these doors are the right size, angled properly, fit tightly to the fuselage and are not inset into it. They even have rounded upper corners like the real thing.

I have heard that some people think the nosegear leg is too long but I actually disagree. This model doesn’t look like a 737 MAX-8, which I have seen in person several times. The gear leg is certainly shorter than that of a MAX but admittedly some of the 1:400 MAX moulds (I’m looking at you Phoenix) have way too short a nosegear leg and so perhaps this is part of the confusion.

The rest of the fuselage is picture perfect, whilst the wings slot in tightly to the fuselage as they should. The engines and pylons are also impressive. None of the other moulds hold the engines high enough, which means in combination with an often poorly proportioned nose gear that the engines are too close to the ground. On this mould that is not a problem.

The mould also has all five aerials including the pair near each other on the underside (one of which is often excluded on other moulds).

There are very few moulds that are as well made as this one. Not only is it the best 737NG but it is also the best 737 in this scale, and quite frankly a strong contender for the best Boeing mould in 1:400 scale period. 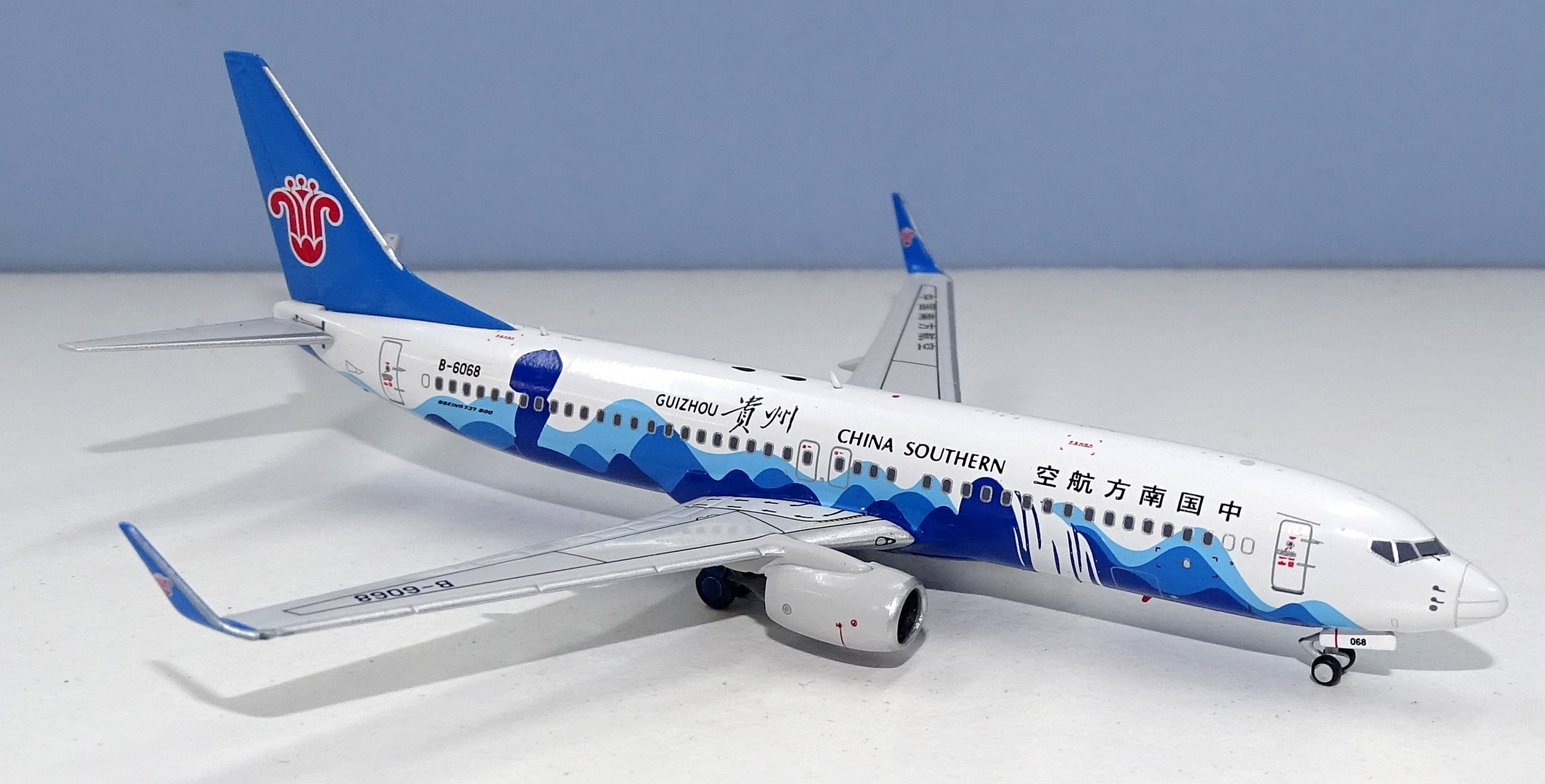 Of the major Chinese airlines China Southern has had the least special liveries. This scheme retains the standard tailfin but the fuselage is ‘dominated by blue and white, which is echoed by the original blue color of China Southern Airlines. It is subdivided into three kinds of blue, reflecting the rich wax colours.’ The livery features several Guizhou landmarks including the Huangguoshu Waterfall and Fanjingshan Mushroom Rock both part of wavy rounded hills that feature along the fuselage.

Execution of the livery on the model is at close to perfect. It is a complex livery but I can’t see any places where the placement of the wavy hills or Mushroon Rock or waterfalls is misaligned. The colours are accurate and the Chinese character titles well printed.

Small details, like the smallest of the three underside aerials being blue, have been noticed and replicated. The correct blue outer wheelhub colour has also been applied to the maingear tyres. I have to really stretch to find any issue and all I can see is that the right-side winglet doesn’t have the visible silver edge on its inner service and at magnification the leading line of the paint on the outer winglets is wobbly. 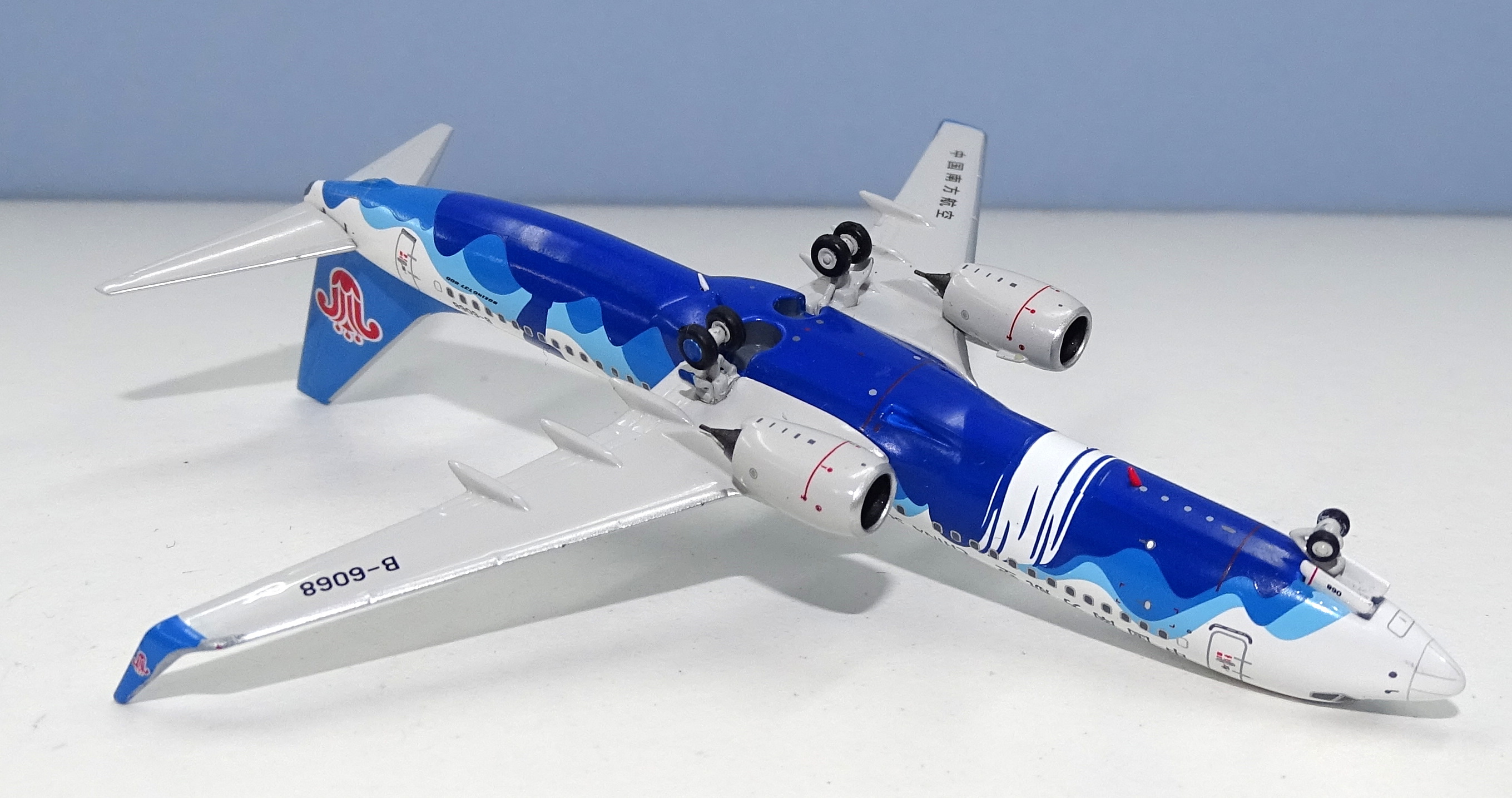 The printing quality and detail is sublime, as always with NG Models output. Some of the detail requires a magnifying glass to be seen and nothing is missing. In particular the cockpit window printing is exceptional, unlike almost everyone else’s 737s.

No loose parts, no tyre tabs, no construction problems.

NG Models are close to putting me out of business due to their high quality. It’s not that I’m cherry picking their models for review either. This is a lovely model and to be honest I don’t see how the fidelity of a 1:400 could ever surpass these levels in anyway that I’d care about. It is only slightly annoying that I have so many other 737-800s now that I can’t see myself ever replacing them with NG Models versions, which I admit are also quite expensive.

In the 1990s a 100 seater was a mainline aircraft, not a regional jet but nowadays this is firmly RJ territory as Embraer and Bombardier carve up the lower end of the marketplace between them […]