China is certainly well covered in 1:400 scale, and although there are quite a few special liveries yet to be made the vast majority of Chinese aviation history, since 1990 at least, has been covered. With that in mind, the huge local market, and it being the homebase of all the manufacturer’s it is hardly a surprise that the fledgling Chinese civil aircraft, slowly being designed and built, have all been popular. NG Models would have you believe that this is the 2nd ARJ21 mould in 1:400 (there are definitely already two C919s), however I am suspicious of that, so here I take a closer look.

The ARJ21 has, with some justification, been largely lampooned in the western aviation press and on message boards. It looks rather ungainly and old fashioned in a market that has, since the late 90s, filled the sub-100-seater niche with a range of purpose-built regional jets like the Embraer 170-195 and Bombardier CRJs. After all, from the outside it is basically a DC-9-20 with a new wing (designed by Antonov of the Ukraine).

Producing the Xianfeng (Flying Phoenix) has certainly taxed Chinese technological capability since design began, way back in 2002. The constant delays (first flight didn’t take place until November 28, 2008 and service entry wasn’t until June 28, 2016) have made the type something of an ugly duckling, but in many ways it is really more of a proof of concept than fully fledged airliner. It has been a steep learning curve but production certification was finally achieved in 2017, allowing real production to commence, at least in theory.

For more about the development of the ARJ see: Fledgling Phoenix: The COMAC ARJ21

Unfortunately, certification has not been the end of the troubles and, although by mid-May Chengdu Airlines had six in service and Genghis Khan Airlines one, there have been a series of major issues with the type. A lot of this appears to be centred around reducing the airframe weight and modifying the cockpit design. Nonetheless, it seems nothing can stop production continuing and Urumqi Air is set to become the third operator sometime in August. Urumqi has a letter of intent for 20 of the type although you’d have to be a real optimist to expect it to receive all 20 of them.

One of the issues that may well limit future deliveries is that even if the aircraft were problem free, and at all competitive, Comac’s Shanghai facility can currently build only 15 aircraft a year. A new plant is being built, which can produce 30 more, but even at 45 a year it would take nearly a decade to deliver all the, nearly 700, aircraft that are signed for. In reality it is far more likely that production will stop before 100 aircraft are built, allowing Comac to draw a line under the type and focus on the larger C919.

Certainly, the majority, if not all, ARJ21 operations will take place away from competitive routes and with smaller airlines like Xinjiang based Urumqi Air. Considering Urumqi is itself styled as a low-cost carrier and part of the U-FLY Alliance, mainly operating 737-800s, the order for ARJs seems unusual, but then again not everything that happens in China necessarily makes sense. At the very least it’s nice to see more diversity in the world’s aircraft fleets. This airframe is still currently registered as B-001Z but it scheduled to become B-602D when she enters service.

The provenance of this ARJ mould is interesting. NG Models have said this is a new mould and not the same as the Panda Models mould. There have now been 10 ARJs made in 1:400 with 6 from Panda themselves (although at least two were made for Skywings). The first was in 2017 whilst the last was Panda’s ‘Year of the Dog’ Chinese New Year model from early 2018. 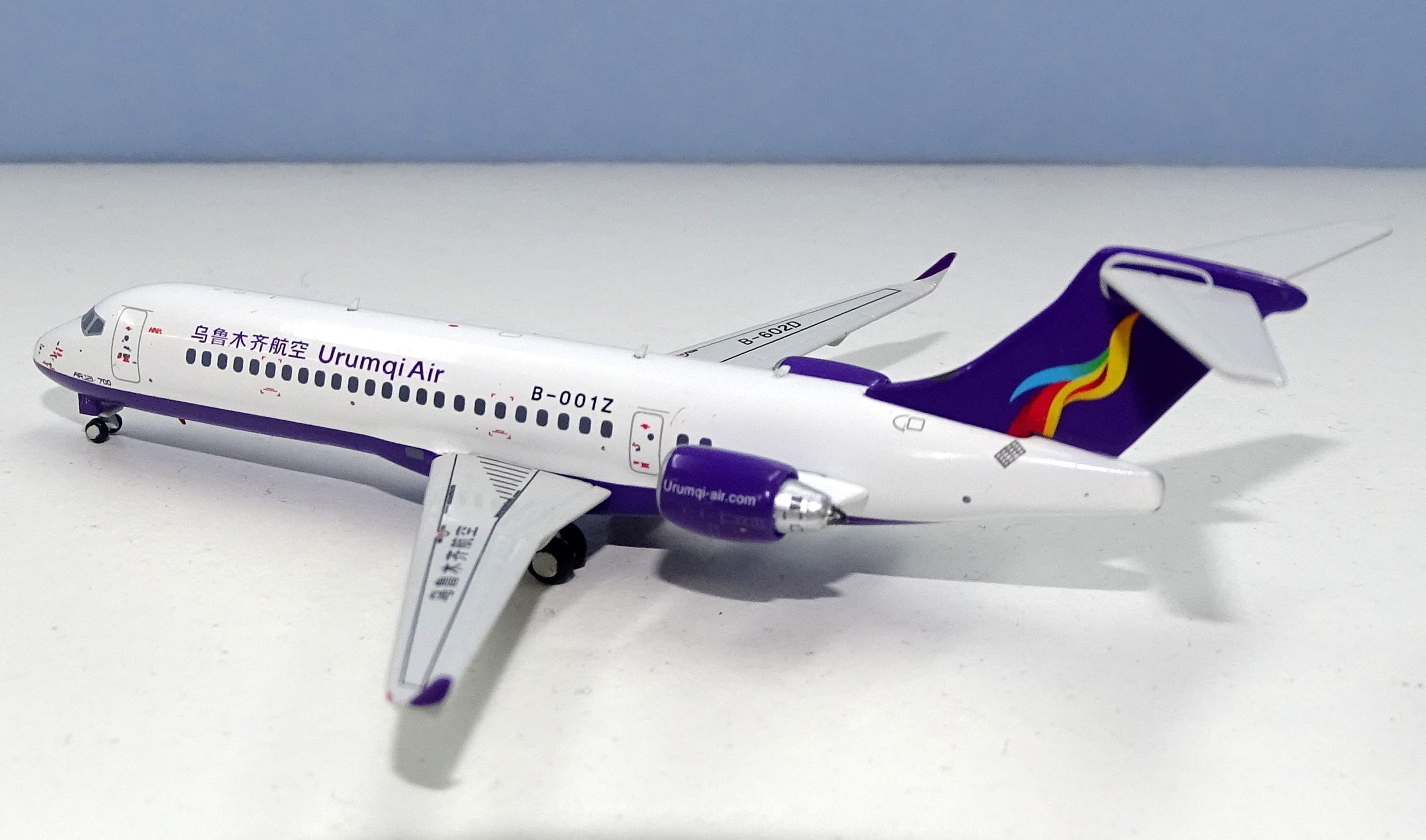 There have been no more, aside from four new NG Models releases from May 2019. I have always been rather dubious of the relationship between NG Models, Skywings and Panda Models. Skywings is a major Chinese retailer and certainly used the latter (and JC Wings too) for a range of Chinese airliners but also has used the former’s C919. In the end it doesn’t really matter and I can’t determine the truth anyway.

What is clear to me is that either this NG Models mould is exactly the same as the Panda Models ARJ or both moulds are so close to perfect that no difference can be distinguished. I’ll leave it up to you to decide which theory you prefer. I can’t distinguish between the two (I own a pair of the Panda releases already).

Essentially the mould is a very good representation of the ARJ and gets the big things all correct. The nose, cockpit region, fuselage and wing all are the correct shape and fit together well. The model has 4 of the 5 aerials, despite it being such a small aircraft. The aerials on the real thing look a little oversized and the model has well sized additions, only lacking the small underbelly aerial aft of the maingear.

The underside of the mould is delightful including the wheel wells within which the maingear fold and very nice undercarriage. 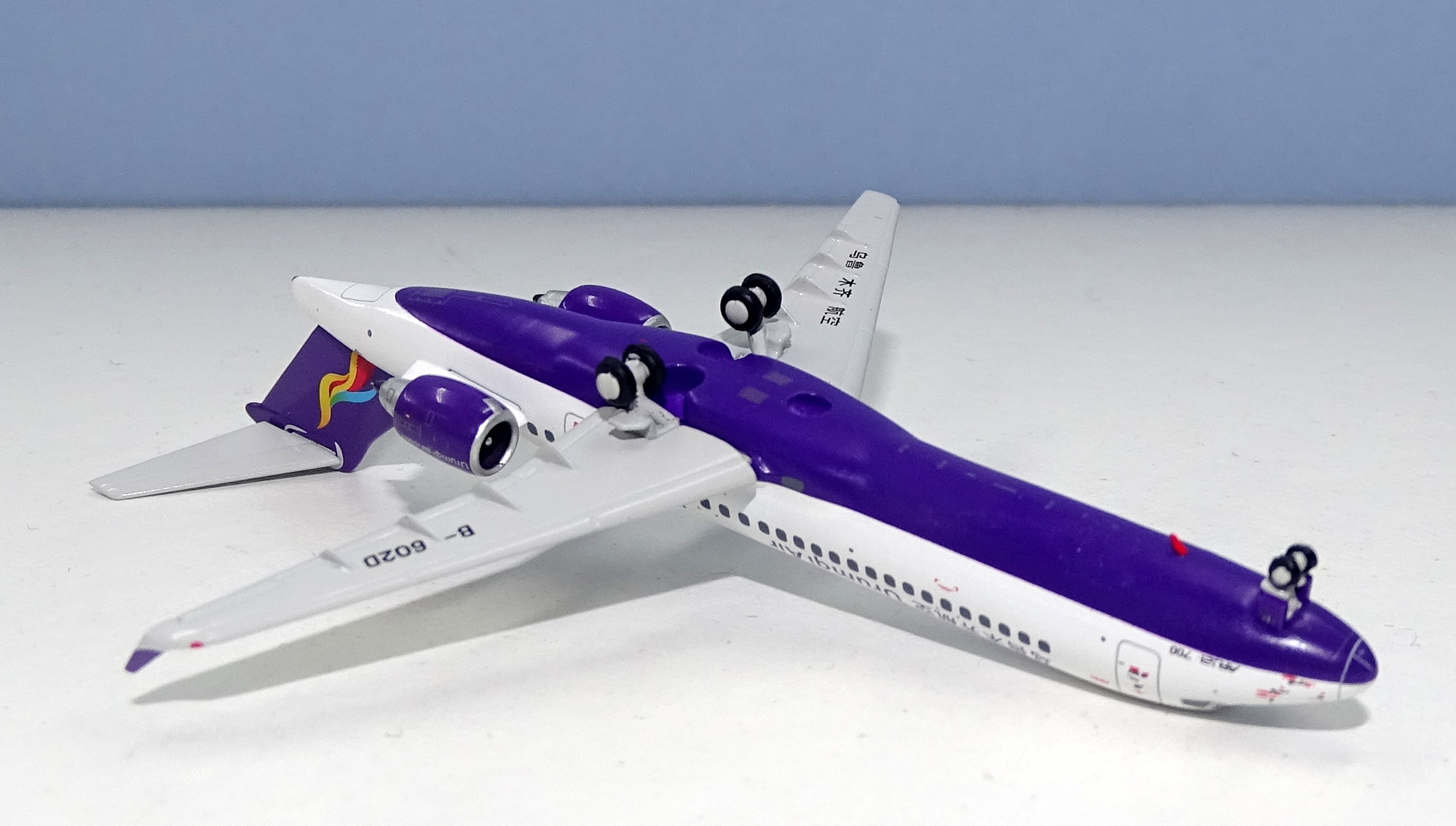 The mould isn’t however perfect, and has several small issues that can be seen when looking very closely. The winglets are the right height but not quite wide enough, the rear of the engines lacks the definition of the triangular edge of the first stage exhaust, the screwdriver tailcone is not quite square enough and the small bump atop the fuselage roof above the wings is not modeled in. These are the same criticisms that could be leveled at the Panda mould pretty much conclusively confirming it is the same.

These criticisms are mild and all of them together don’t really merit more than a single dropped point in my opinion. 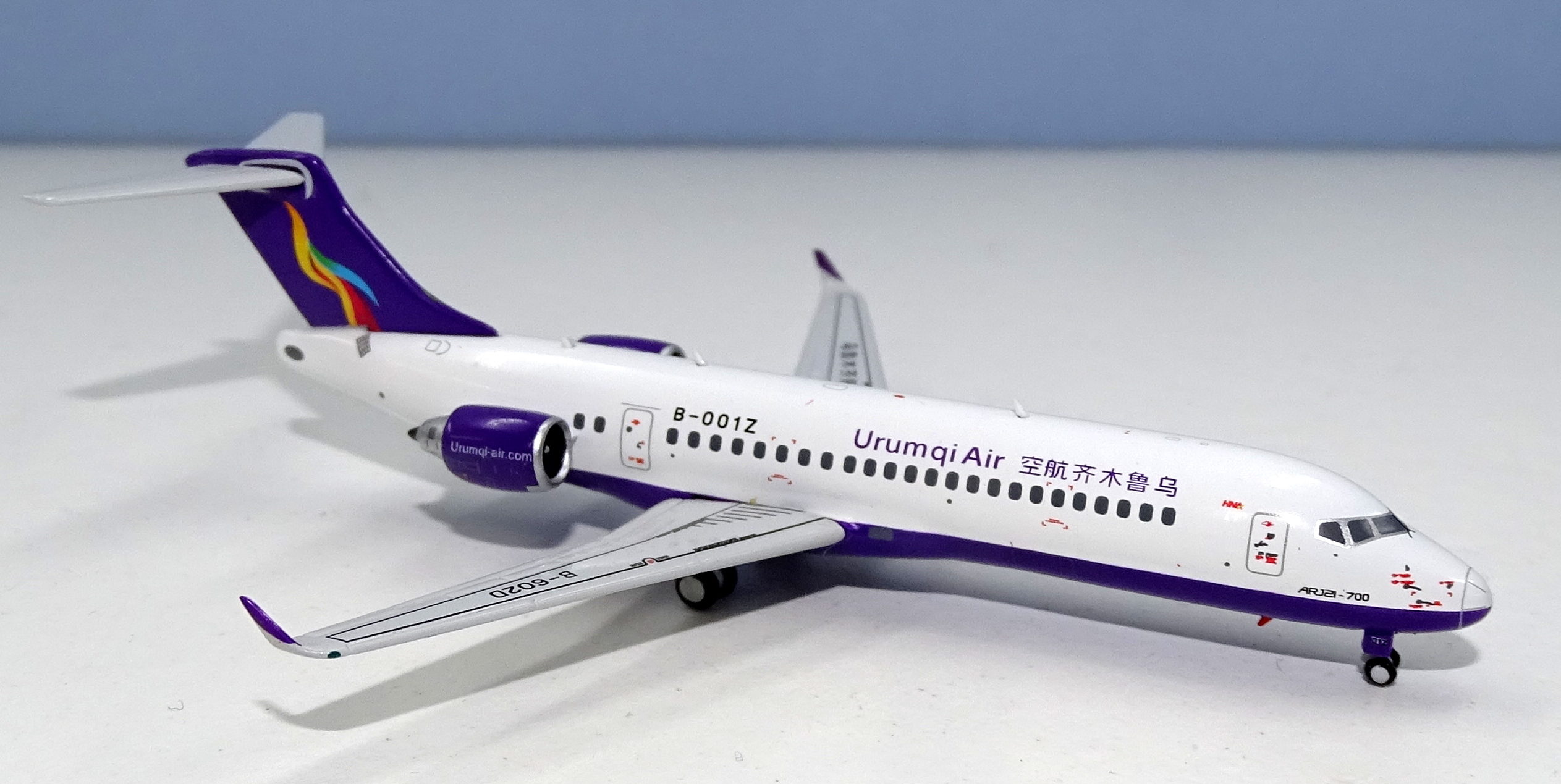 Urumqi Air has an attractive and stylish livery, which ‘integrates the three-color Adlai silk and flying dove, which highlights the geographical reputation of Xinjiang Uygur Autonomous Region, symbolizing peace and friendship.’ What that means in reality is a deep purple belly, engines and tailfin with the flowing silk/dove tail logo.

It is a sign of the times that this is actually the fourth Urumqi Air release and previously Panda Models at least found the purple difficult to reproduce, as they made it too dark. NG Models make no such mistake and the colour is rich and well defined.

The rest of the livery is quite simple and perfectly applied from the small ARJ21-700 titles on the nose to the Urumqi-air.com titles on the upper engine nacelles. Interestingly the model carries its future reg under and atop the wings. I can’t find a photo to verify this is accurate but it makes sense.

Printing is uniformly excellent as we have come to expect from NG Models. There’s no skimping on detail even on a small airliner with a uniformly painted dark belly, however one small omission does exist. This is the black surround to the APU on the aircraft’s starboard side. Although the APU itself is printed the black area that connects to the screwdriver tailcone is missing.

Construction quality is topnotch with no issues.

The ARJ21 harks back to a time when Douglas aircraft were important components of the world’s fleet of airliners and the Urumqi Air livery looks smart on the type. It certainly has brought some difference to the increasing see of A320s and 737s making up my China fleet. I am especially enamoured of releases of the smaller and more obscure Chinese airlines so am happy an ARJ mould has been made even if I would have preferred a DC-9-10. This is a fine mould and lovely little model.