Licensing is a funny thing; on the one hand some people want official releases and on the other I’d argue most people don’t care. I fall firmly into the latter category as charging for the use of your branding on a model seems rather spurious to me. It’s not like getting official permission necessarily guarantees quality, as there have been plenty of times official models are staggeringly inaccurate both in terms of the livery and the actual aircraft. The Herpa Cathay Pacific models are a good example. They may be official but they are rubbish. NG models has at times observed perfect licensing protocol and at other times hasn’t. In this case it has, which means the collector gets exactly the same model they would have got anyway, but it now has a steep price increase associated with it. Portuguese airlines seem to be sticklers for licensing in general. I still recall one time I posted an image of an Aeroclassics SATA A310 and I was told to take the image down by SATA themselves, even though I was just a collector.

The Tristar 500 was a rather desperate attempt by Lockheed to regain some of the ground lost by the near collapse of Rolls-Royce, which had put the kibosh firmly on developing improved versions of the Tristar engines able to compete with the range of the McDonnell Douglas DC-10-30 and DC-10-40. The latter were powered either by General Electric CF-6s or Pratt & Whitney JT9Ds, which progressively increased the type’s range from a widebody medium range trunkliner to a long-range globetrotter. Unable to do this Lockheed instead cut the weight of the Tristar to enable greater range.

The Tristar 500 was an obvious choice for airlines with significant standard Tristar fleets such as British Airways, Air Canada, Delta and LTU. What the Tristar 500 also provided was an excellent aircraft for smaller national airlines that had either tried larger equipment, but couldn’t make 747s work, or who needed a smaller widebody upgrade on their existing 707s. In the latter category BWIA, Air India and Air Lanka fitted while in the former Alia Royal Jordanian and TAP Air Portugal had both operated small numbers of 747s.

Tap’s route towards the Tristar 500 was not straight forward. It initially ordered three with an option for two more in September 1979, but just as it gained the necessary financial package to buy the aircraft the Portuguese Government stepped in and refused permission for the order. This was due to heavy losses TAP suffered in the previous years. In order to justify the fleet expansion, the management needed to present a restructuring plan designed to make the airline viable within the next five years.

No sooner was this obstacle negotiated than industrial action stopped negotiations again and it wasn’t until October 1980 that the order was confirmed. The first aircraft was delivered in January 1983 and the fleet grew to five when the options were taken up. The fleet grew to seven aircraft in 1988/89 with the addition of a pair of ex-Alia aircraft one of which became CS-TEG. This frame, formerly JY-AGJ, was named Eça De Queiroz, after the famous Portuguese writer of the 19th Century. All of the TAP Tristars were named after famous Portuguese historical figures.

CS-TEG’s service with TAP lasted only for just under six years as TAP began to take delivery of new Airbus A340-300s in November 1994. She was one of the pair leased to Air India in late 1995 and her subsequent career included service in Sweden with Novair as SE-DVI, before a return to the Portuguese register as CS-TMP with Air Luxor and LUZair. 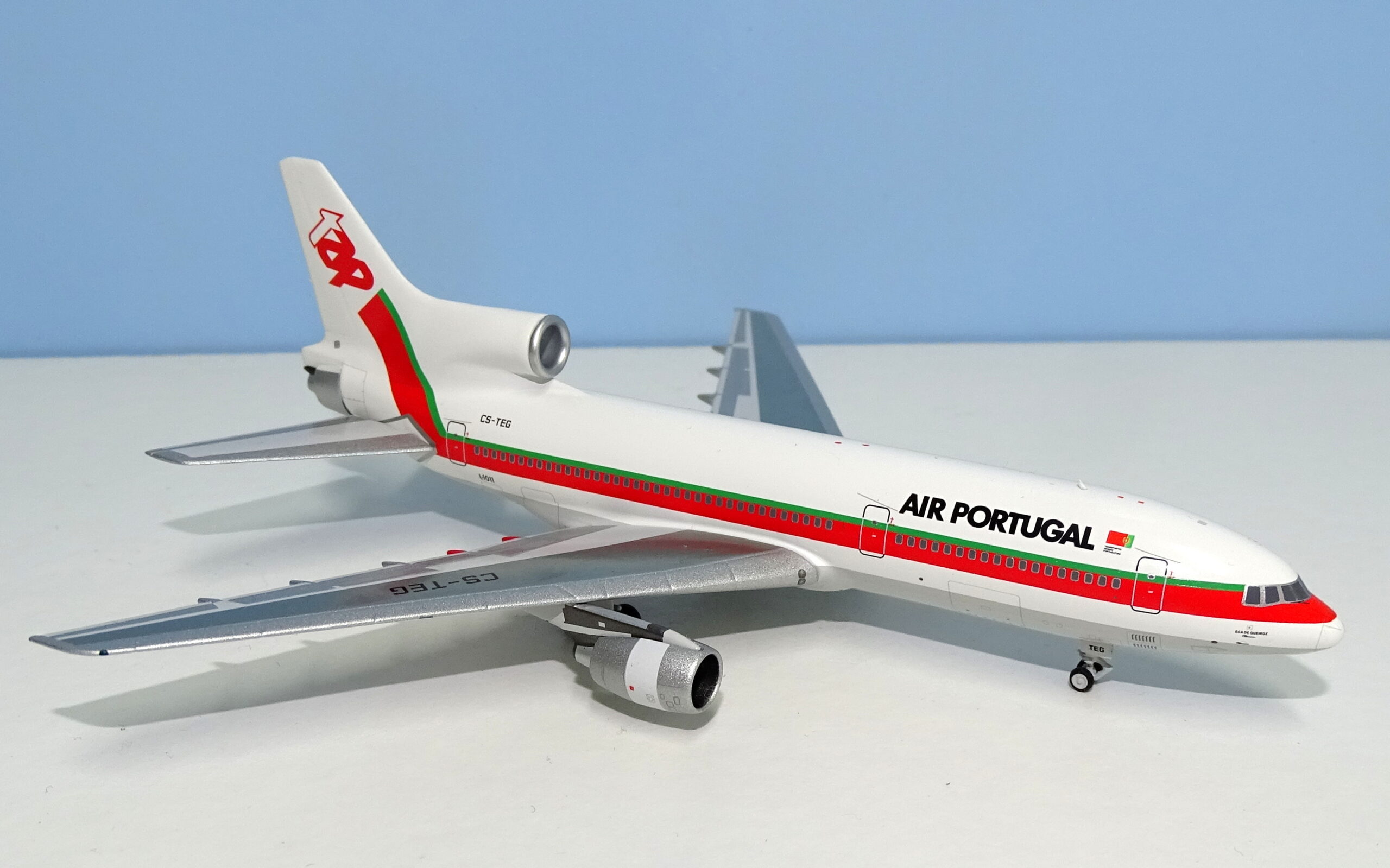 It is hopefully well known by now that the only real competitor to the NG Models Tristar 500 is the old Dragon Wings version dating from the turn of the century. Certainly, the Gemini Jets and Lockness Models versions from the past couple of years can be easily discounted as they do not portray a real aircraft. They instead portray a weird Tristar hybrid without many of the features that make the 500 unique. 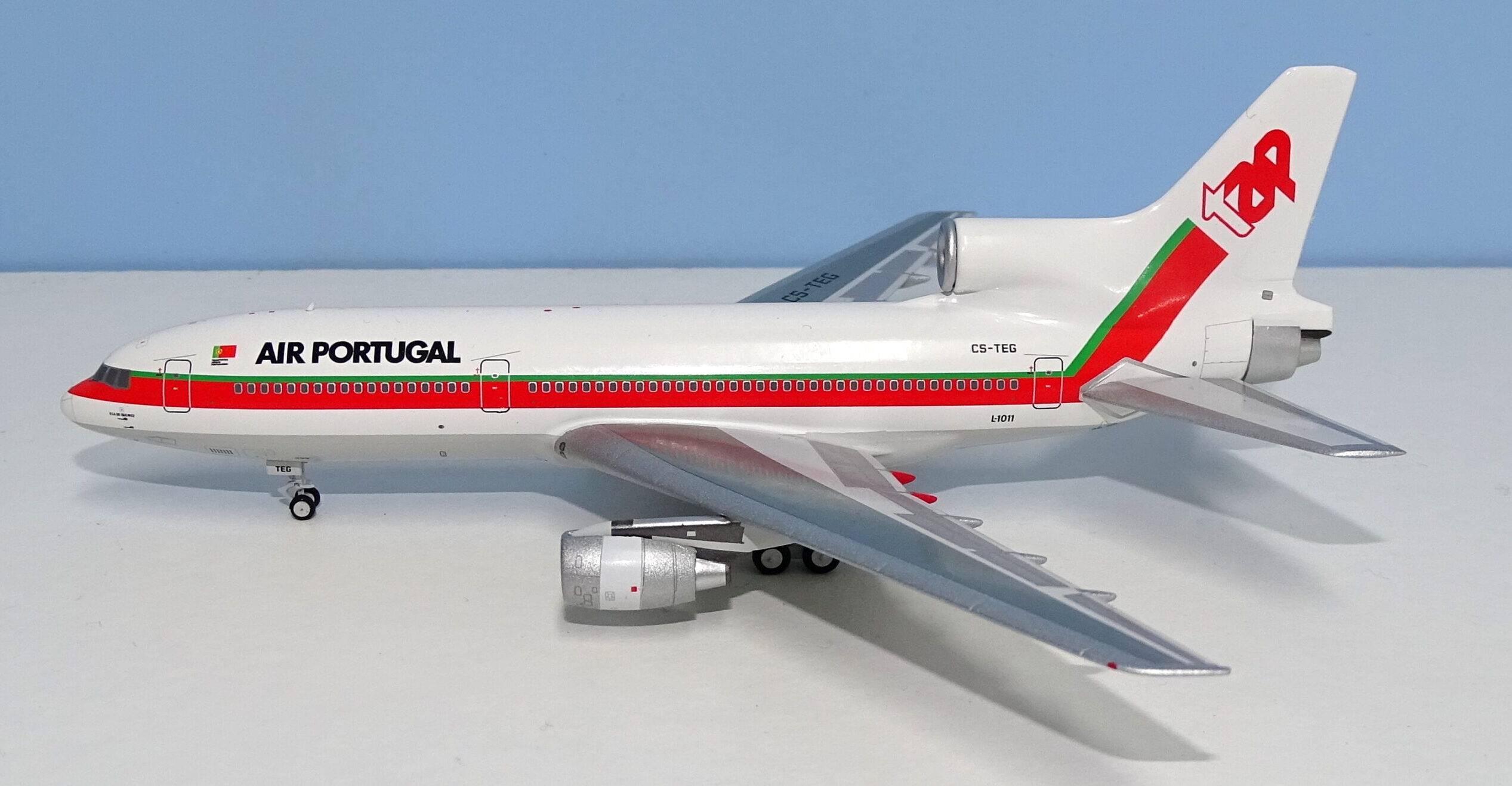 It helps that the standard-length NG Tristar is so good but that wouldn’t count for anything if NG had ignored the differences. As a recap they are:

Gemini got 1.5 of the 4 and Aeroclassics managed slightly better (about a 2 although the undercarriage and nose are worse). NG Models gets about a 3.5. My only criticism is that the complete shape of the middle engine fuselage fairing (frisbee) isn’t spot on. It’s still a little too concave.

What you do get of course is the perfect nose shape, beautiful fuselage and amazing tail section. The latter is particularly nice with an excellent engine to fuselage width and perfect angles. The complex tailcone, engine exhaust area is tightly fitted and looks great. The wings of course demonstrate the extended wingtips and a good angle. These are all major features that have been incorrect or poorly reproduced on the competition.

The undercarriage is very attractive but does repeat the minor errors of the standard-length version. The forward process on the nosegear is a little large and the angle of the maingear doors is not quite correct.

Criticism of the NG Tristars has been centred on the angle of the forward engine rims but it is pleasing to see that NG Models has recently improved this and the engine rims correctly angle backwards, albeit only slightly. This modification to the mould removes the only real problem it had and elevates it from the 9 I have previously given it to a 10. 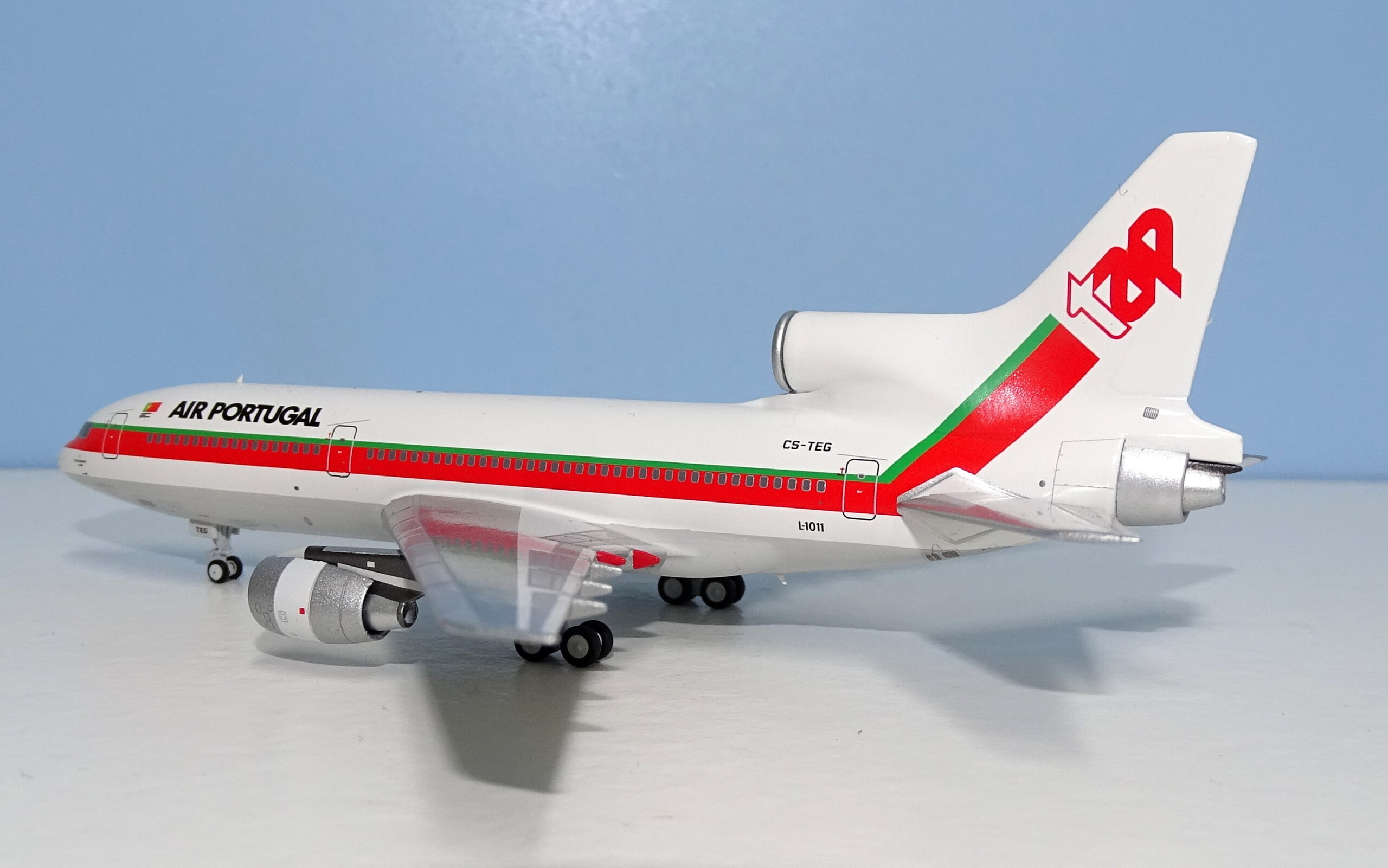 This is a rather curious registration to choose for this model since it does not represent the TAP Tristar 500 in the delivery colours and as noted it wasn’t even a machine delivered directly to TAP. The primary difference is the belly colour, which was natural metal on the original aircraft not light grey. It is a little disappointing that they have done this unless they are planning on subsequently producing the original version as well. I certainly would have preferred the original colours. It wouldn’t surprise me at all if this is the sort of interference from TAP themselves you sometimes get when a model is fully licensed. Airlines rarely know their own histories so it would be a typical mistake for them to make.

At least the rest of the livery is the TAP classic orangey red and green, which NG has gotten perfect. In some photos it looks like there is a thin line between the red and green but other close up shots show this isn’t true. The cheatline is well placed and takes it diagonal route up the tail well, producing an interesting curve over the shape of the number two engine.

The titles and tap tail logo are good and as you can expect from NG the tiny text under the Portuguese flag and the aircraft name are actually legible under magnifying glass. NG even replicate the white and silver panel detail visible on many photos of the aircraft. 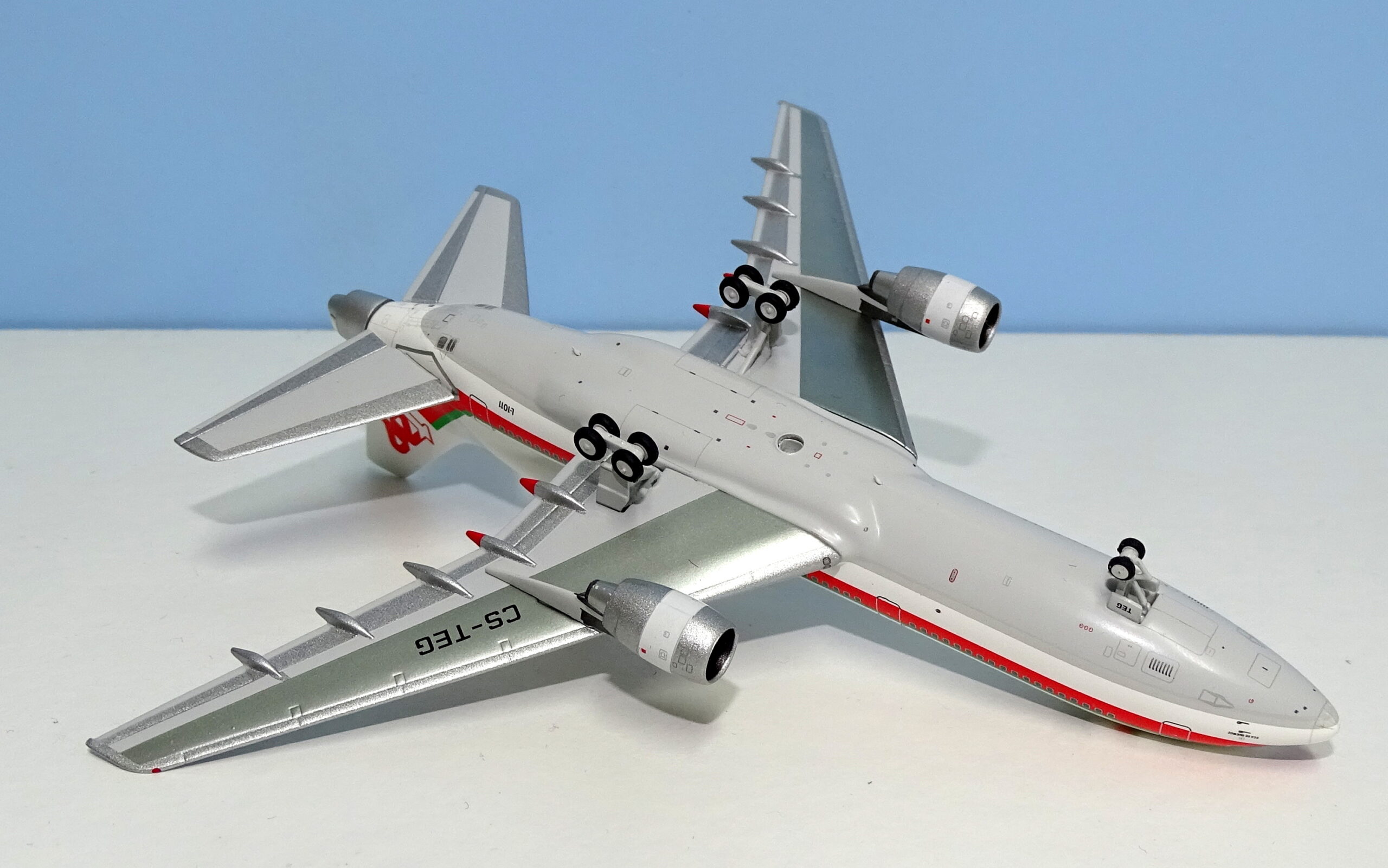 Printing is one of NG’s strongest points and to compare the models from different manufacturers printing the best thing to do is flip them over and look at the undersides. Yes, you may not see them when the model is on display but the detail put in their shows how much the brand cares about getting it right elsewhere. NG cares. The underside of their Tristars are spectacular, especially at the rear. NG have taken printing to another level and this L-1011 has the finest. 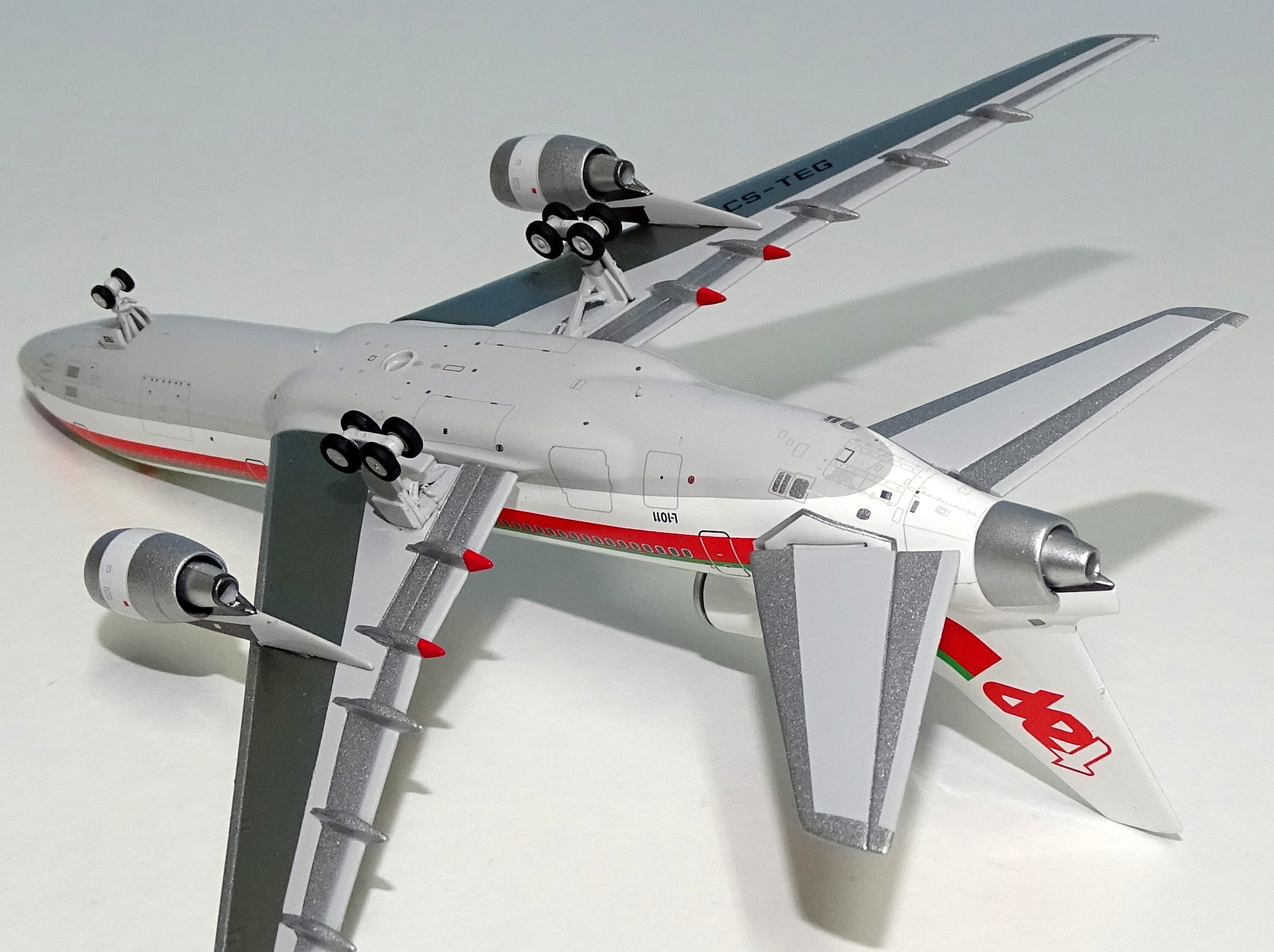 Build quality is very good with all major components in place and fixed well. Nonetheless the continuing wheelhub issue of NG Tristars continues with this one too. Of the wheelhubs on this model half of them (5 of 10) have the undetailed wheelhubs. Annoyingly of the maingear it is only the inside hubs that are correct while the outside ones are lacking in details. This should be an easy issue to fix but it hasn’t been now after several months.

This is a fabulous model but is it better because it is licensed by TAP (and the box doesn’t even mention NG)? No, it isn’t and I suspect if NG had been able to ask collectors, we’d have got the natural metal belly version and a more typical rego of one of the original 5 L-1011s. Still, you can’t argue with the score.  The question is whether the model is worth the extra $$ added to the already not insubstantial cost of an NG Tristar. Well, yes, it is – just.

In recent months Aeroclassics has swung away from the delivery of 767s and Tristars alone and rediscovered several of its other classic moulds (DC-9s, DC-10s, F-27s and the like). This has provided a deluge of […]

Phoenix isn’t as renowned for producing narrowbodies as it is for modern widebodies (excluding their awful 747), however in general they are solid and workmanlike. With lots of new narrowbody competition from JC Wings and […]

Aviation history is rich with important airlines that are nowadays considered so obscure few enthusiasts, fixated on Airbus and Boeing 787s, have heard of them. In 1:400 scale Aeroclassics is the last bastion of releases […]