HYJLwings debuted their new Airbus A321 mould in 2017 and up to the end of 2018 used it to produce a lovely range of A321s. Most were Chinese airliners, or Lufthansa, and they were produced in a wide variety of engine and livery versions, usually each of which had small production runs of 60-150 units. HYJLwings then vanished and subsequently NG Models started to use the A321 themselves (they were the ones making the HYJLwings models for them). In April 2020 the HYJLwings brand reappeared with a new trio of A321 announcements, although it is far from clear whether this is the same company or whether NG Models have taken over the brand entirely. There have since been further announcements of HYJLwings releases, using the NG 737-800. Whatever the truth the HYJLwings brand at least is back in play.

From a world that at the turn of the century was trying to decide whether Super 747s and A380s were the future of long-haul travel there has gradually been a change towards smaller widebody jets on higher frequency services. This has favoured the 787 and A350 over the new 777-9, but now in a post-Covid world of literally decimated air travel, and talk of a return to the 1930s, even these smaller widebodies are too large. That has left the airlines looking at what the future holds and the realisation that perhaps narrowbodies will be enough for many routes.

The only suitable frame readily available is the Airbus A321neo and it is plain to see that of the huge order backlogs Airbus and Boeing have there are few aircraft outside of the A321neo that airlines are at all interested to take delivery of. Even outside of the A321LR and A321XLR variants the standard A321neo offers major cost-savings compared to other narrowbodies, which has helped it and the smaller A320neo to remain viable.

Up to August 2020 there had been 150 new A320neo and 80 A321neo deliveries this year, accounting for 230 of the 284 aircraft Airbus has delivered in 2020. Nonetheless for some airlines the situation is so bad that even the A321neo can’t help them. Cathay Dragon and Hong Kong’s airlines in general are some of these.

The Chinese market has been getting back to normal faster than anywhere else globally but despite this Hong Kong is in a dreadful position. Not only has the long-haul international and cross-Straits Taiwanese traffic practically ceased to exist, but the political situation in Hong Kong makes a return to normality hard to see even if Covid vanished overnight.

Cathay Dragon is reduced in September to operating a massively reduced schedule using primarily A330s. The routes operated are as follows:

Twenty-five A330s remain in service alongside 5 A321ceos, but everything else has been stored and the pair of new A321neos scheduled for delivery remain with Airbus. MSN 9228 is currently still registered with the test registration D-AVYR but is scheduled to become B-HPB at some point. When that will be is hard to say, especially with a radical resizing of the Cathay Pacific and Cathay Dragon operations expected in the very near future.

Few photos of this aircraft exist but those that do can be found at the AIB Family Flights website.

One of the great things about the HYJLwings / NG Models A321 is that they have all the variants – Airbus ceos with and without Sharklets, both IAE and CFM engines, and in the world of neos both the Pratt and CFM engine variants. Also, unlike most others these moulds understand what makes an A321 wing an A321 wing!

As I have pointed out a few times previously, when reviewing A321s, the type is more than just a stretch A320 since the wing is equipped with double-slotted flaps. Both the Phoenix and Aeroclassics Sharklet equipped A321s incorrectly reuse the A320 wing. HYJLwings have paid close attention and the wing is excellent. The detail is wonderful – fine etching to mark the flaps and ailerons, a great shape and a lovely snug fit to the fuselage.

Another major strongpoint of this mould is the undercarriage. This is such a negative point on the JC Wings mould and one of the less good aspects of the Aeroclassics. Here the tyres are excellent, both in size and detail, whilst the slightly forward angle of the gearleg and size of the gear doors are accurate.

The fuselage shape is accurate from nose to tail. On the aerials front the model has all the major aerials (3 on the roof and 1 on the rear belly) and is only missing the very small one on the forward belly. All the aerials are well placed and sized.

Another area where there is great attention to detail is the moulding of the CFM LEAP engines, which have an unusual asymmetric nacelle thanks to a bulge on the lower forward left side. The engines themselves have a solid fan core but this looks realistic. The only criticism I can level at the mould is that the engines themselves hang a little low and don’t quite have the ground clearance I’d expect.

Overall, this is the best A321 mould in 1:400 scale but when the CFM engines are fitted ground clearance is a minor issue.

This aircraft has been sitting fully painted at Hamburg now since March, although it doesn’t appear to have flown yet. As such it has the full Cathay Dragon scheme painted on it, albeit with the German flag on the tail and test rego. This model release is obviously supposed to illustrate it after delivery with those elements removed.

It is a simple livery riffing off of the standard Cathay Pacific arrangement, but with its own light maroon and blue grey. The colours used on the model are fine and the brushwing on the tail well placed and detailed. [Edit: It has been pointed out that the belly is too dark a grey and I tend to agree].

The size and positioning of the fuselage elements is up to the usual high standards with finely detailed titles and a lovely Chinese dragon. The engines correctly replicate the fuselage band.

There are very few images of this aircraft available but it is clear that it uses the standard Cathay Dragon scheme and from photos you can just see that that includes featuring the brushwing design on the inside of the Sharklets. This has been missed in the design process and the insides are missing the logo. The unpainted leading edges of the Sharklets are also significantly wider than is shown on the model in real life. 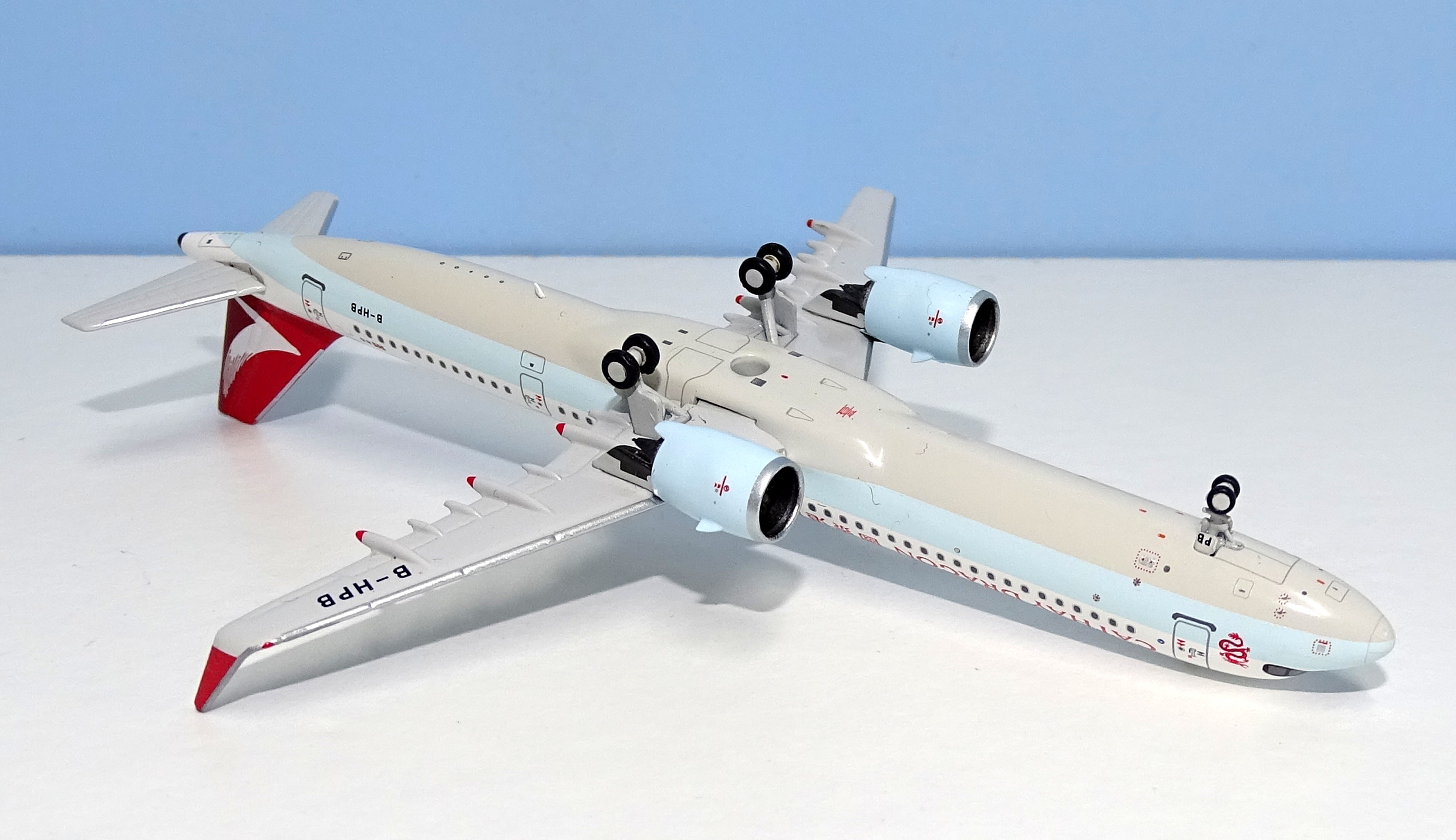 You must know by now that when purchasing HYJLwings or NG Models releases you can expect flawless printing of the highest technical detail. That is exactly what you get with this model. 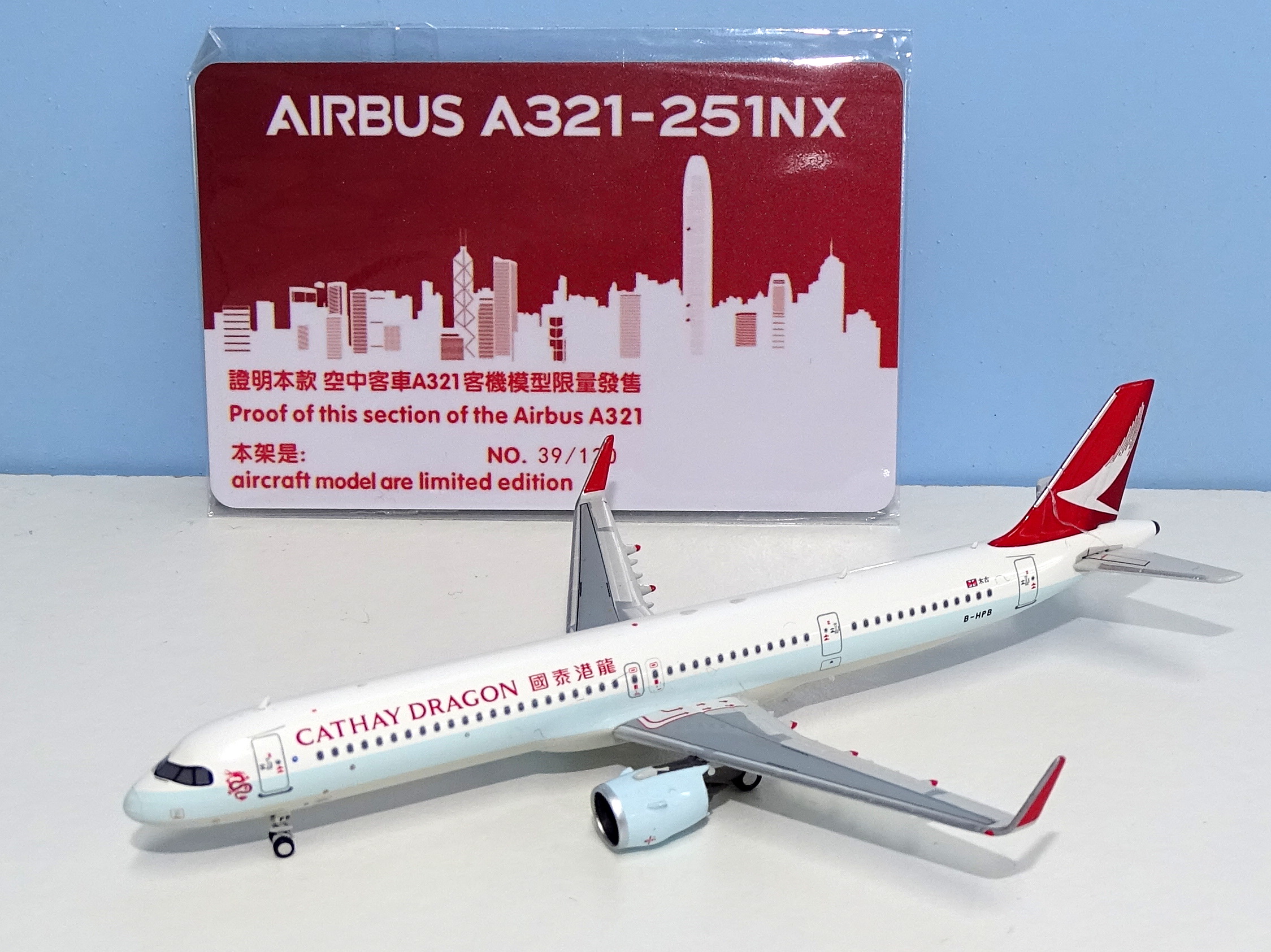 As is standard with HYJLwings releases this model comes additionally with a collector’s card telling me that its number 39 of 120 made. Interestingly this card now does not show the signature of the former HYJLwings owner Jelly Huang suggesting that indeed HYJLwings is now a full sub-brand of NG itself.

Build quality is topnotch and demonstrates none of the loose parts that have been causing some mild hysteria in silly people on Youtube and Facebook. They in my opinion have unrealistic expectations about what is achievable with every single model and don’t seem to collect enough models to really form an opinion that ought to be listened to!

I guess technically at present this is still a fantasy model, although surely Cathay Dragon will eventually take delivery of the aircraft. The model itself is up to the usual high standards of the factory from which it originates but even NG are not infallible and the occasional error is sure to slip in from time to time. Even with that it scores a full mark that is superior to many of its competitors.