Despite modifying its sales method and the impact of Covid Aeroclassics has had a very good 2020, at least in terms of the range and quality of releases. Last month I felt compelled to acquire 7 of their models, which as per usual covered an excellent range of classics from around the globe. Nobody produces the range of airlines and types that Aeroclassics does and without them airlines like Surinam Airways would be forgotten in 1:400 scale.

Suriname is probably one of the least well-known nations in South America. Situated on the Northern edge of South America nestled between the equally obscure Guyana and French Guiana it, like them, has a Southern border with Brazil. The nation is something of an island since the majority of it is still thankfully taken up by large tracts of rainforest. Most of the small population of 575,000 is still confined to the coastal edge centred around the capital city Paramaribo.

Suriname has an unusual Dutch colonial history that has left it as the only country outside the Netherlands where Dutch is the primary language. Naturally it has strong ties back to its former colonial master. This history is evident in the national airline and its operations. Surinam Airways, or Surinaamse Luchtvaart Maatschppij (SLM), was formed in August 1962 and until independence in 1975 operated only regional routes. Independence brought a 17-year period of DC-8 driven long-haul services.

These began using a leased KLM DC-8-63 (PH-DEM) to operate the precious Paramaribo – Amsterdam service. This aircraft was supplemented by an ex-KLM DC-8-55 in 1979 but both aircraft were removed from service in late 1983. There was then a period without long-haul operations, presumably due to financial problems. This changed with the acquisition of another DC-8-63 in July 1985. This aircraft, registered N4935C, had been originally delivered to Iberia in 1968, as EC-BMY, and had seen service with Aviaco between 1981 and 1984. Sold to International Air Leases it was used by Rich International prior to lease to Surinam.

Once again Surinam expanded its services further with the addition of a pair of ex-Braniff DC-8-62s, but sadly one of these was destroyed on June 7, 1989 when it crashed on landing at Paramaribo. Of the 187 aboard there were only 11 survivors. The accident was caused by the ‘captain’s glaring carelessness and recklessness’ and the airline’s failure to manage the qualifications of the crew being provided by its partner Air Crew International.

Surinam had struggled with profitability even before the crash and the DC-8 flights limped on until July 1992 when N4935C was repossessed by International Air Leases. From that point Surinam Airways operated only a DHC-8 and MD-87 and code-shared on the KLM service to Amsterdam. That is until August 2004 when Surinam acquired an ex-KLM 747-300 to restart long-haul services in partnership with the Dutch flag carrier. It has not been plain sailing since then but nevertheless Surinam Airways has been able to keep the country connected to the Netherlands and late last year acquired a single Boeing 777-212ER for the purpose. 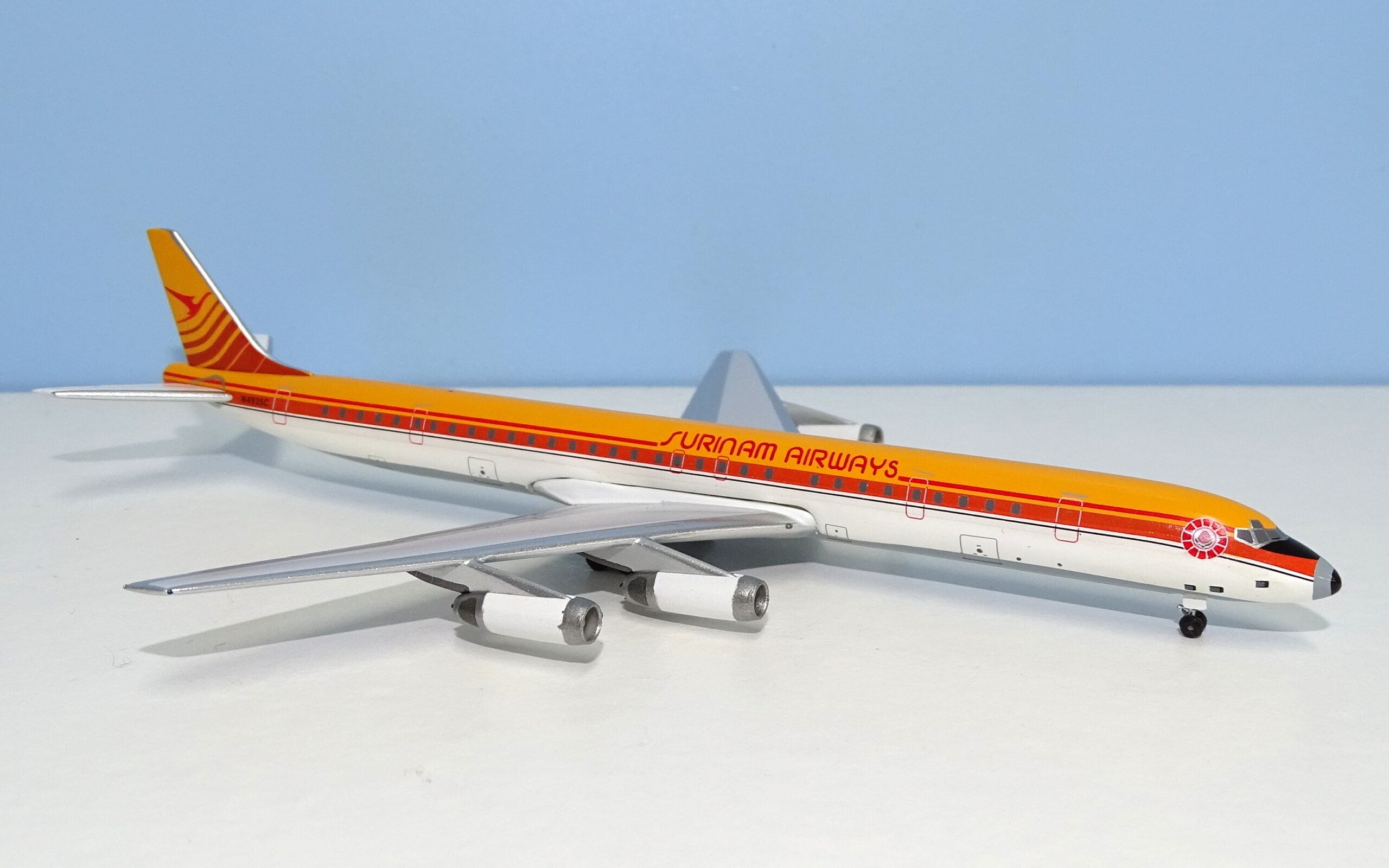 When it comes to Douglas Commercial Aircraft then Aeroclassics is rarely beaten. They have the best DC-4, DC-6, DC-7, DC-9-30, DC-9-40, DC-9-50, DC-10s and DC-8s. Even better they have an impressive collection of DC-8 versions covering the early turbojet water wagons through to the series 50s and beyond. This includes both the stretch Douglas DC-8-61 and DC-8-63 variants, but sadly not to date the re-engined 71s and 73s.

The DC-8s are excellent but admittedly have little competition, with Gemini Jets the only other having touched the DC-8 in 400 scale to date. To be fair the old Gemini mould is perfectly respectable but shows its age with simple gear, thick wings and a slightly chunky nose. Given the impressive form of the Aeroclassics Eights there is really no need for anyone else to bother with a new DC-8 anyway. This is in fact Aeroclassics 2nd DC-8-61/63 mould, debuting in 2008, and is a significant improvement on the 2004 original version.

The fuselage and tail shape of the newer Aeroclassics mould is spot on. The nose intakes are a little hidden by the paintwork but are moulded in. Also moulded in nicely is the rear tail bumper, all important when you have such an incredibly long fuselage.

The undercarriage of the mould is also superb with a well sized nosegear door set (unlike the updated Gemini mould) and well detailed and suitably slight gear legs. The tyres and wheelhubs are simply rubber rings on spigots but with the DC-8 it makes very little difference given the size of the gear.

The wings and engines are another strongpoint. They are accurate and nicely detailed plus Aeroclassics has different sets for the DC-8-61 and DC-8-62/63, which do not share the same pylon / wing join structure. The DC-8-62 was updated with a streamlined pylon that did not go above the wing leading edge and the same improved design was fitted to the series 63 also. Gemini Jets never bothered with the series 62 or 63 variants.

The wing seam on the mould is less obvious than on the smaller DC-8s and even less of an issue since it fits well and follows the correct contours of the fairing anyway. The Stretch-8 can look a little ungainly with such a narrow fuselage and long body, however this mould shows off its characters almost perfectly. It is one of the finest moulds in 1/400 scale.

Surinam Airways had an outstanding bright orange livery throughout the DC-8 era, which was sadly toned down for the delivery of the 747 (although I do own a lovely 1:600 scale Schabak 747 wearing the orange scheme).

Aeroclassics, despite producing an excellent range of models on a largely excellent set of moulds, do have a rather annoying habit of undertaking somewhat lazy research when it comes to liveries, partly because they simply do not appear to look at more than a couple of photos of the subjects. The result is that although the liveries are broadly decent there are usually several detailed mistakes. This model unfortunately illustrates this tendency.

Firstly, although in many photos the upper fuselage colour of this scheme appears quite dark, in well lit higher quality images the roof appears a lot lighter.  I don’t think it is as orange as the colour Aeroclassics has chosen to use. The darker orange used for the tail striping and window cheatline is accurate. The bird on the tail, thin pinstripe and main titles between it should all be red. With the dark orange background, it is actually hard to say for certain but I think they should all be darker.

The aircraft is named Stanvaste and these titles are correctly shown on the lower portside fuselage under the cockpit. I’m less impressed with the flower inside the roundel (I think it is a Faja Lobi – the Surinam national flower), which doesn’t appear to be shaped correctly at its lower edge. You do need a magnifying glass to see this kind of small detailing I admit. 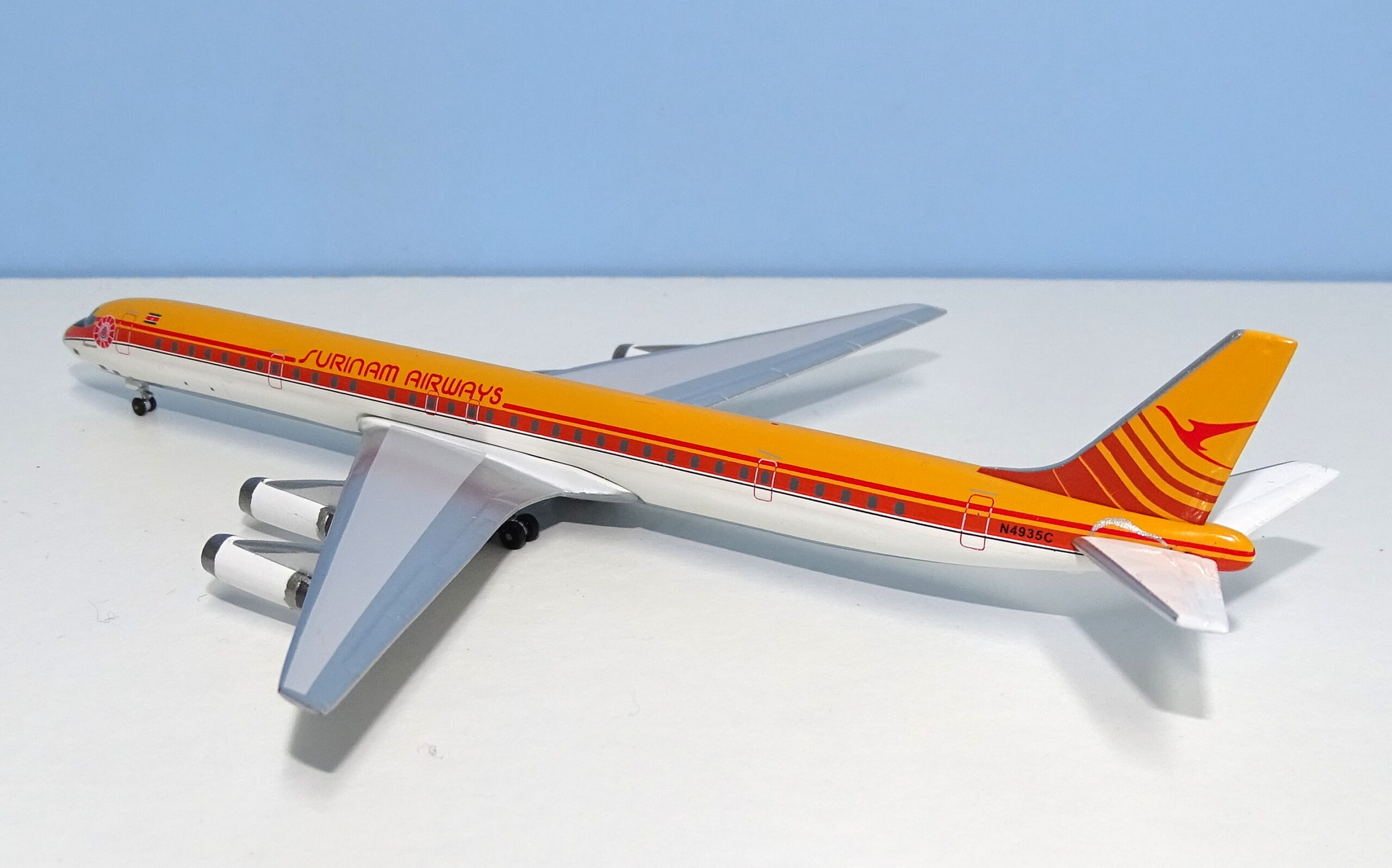 Other livery details like the national flag, window spacing and engine colour are accurate, but the shape of the tail striping is inaccurate. It should be like an inverted S shape but the model has lines that are too straight and lack the upper edge kink.

A final mistake is a small detail on the main titles. On the real thing the unusual crossbar of the A always is connected to the rest of the A on the left side but the model replicates the starboard side titles on the port side and so the three A’s all incorrectly have the space on the forward edge.

The overall effect of this model’s livery is once again that it looks good as long as you don’t look too closely. Ignoring the colours there are three separate errors in reproduction of details, none of which are massive problems, but all of which suggest a lack of quality research and design. 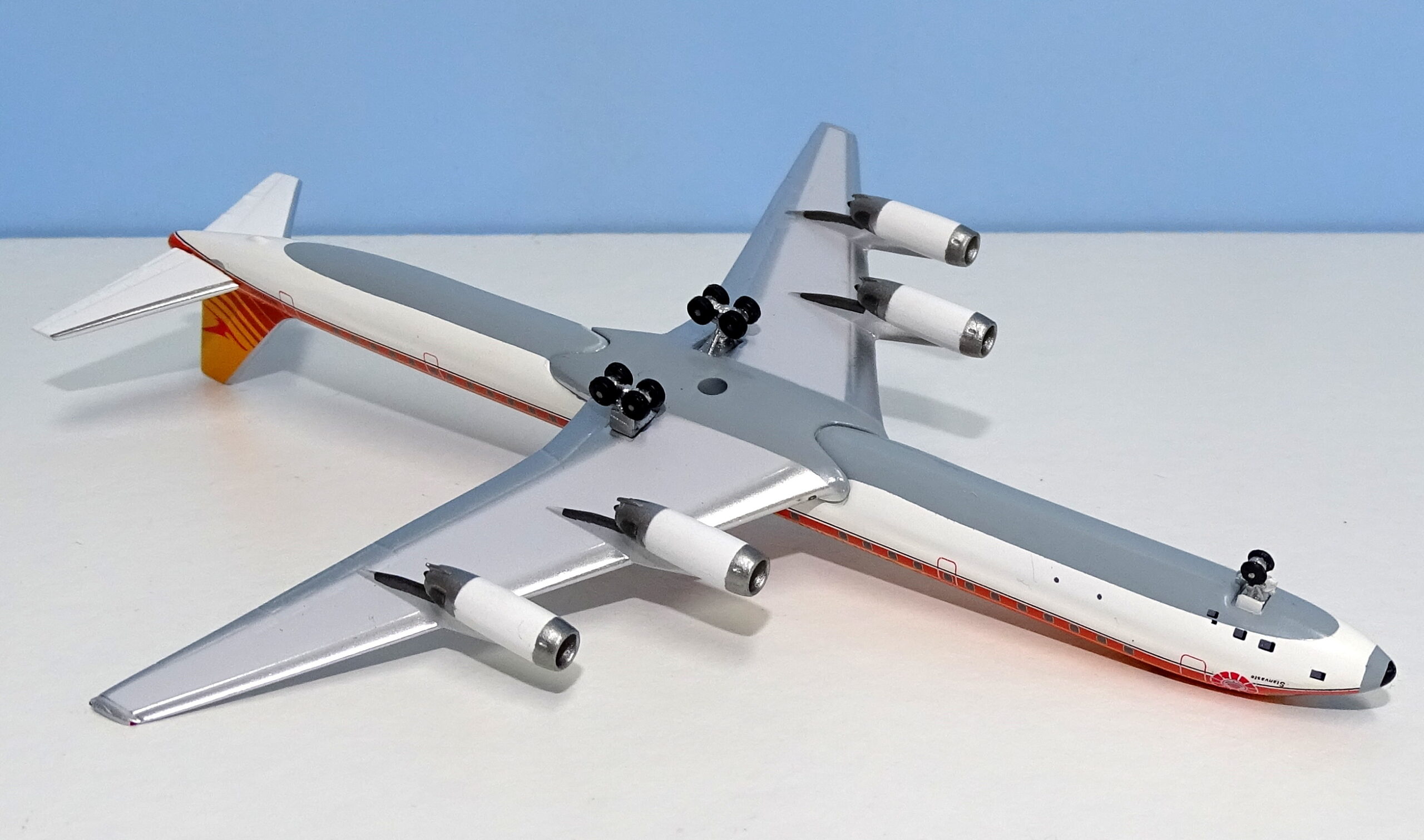 There is some nice printing detail on this model, for example the small landing lights at the wingroot. I would however like to see some missing elements such as the nosecone intakes printed on. Aeroclassics also rely on the mould detailing rather than printing in several areas, such as the rudder and maingear doors. This is ok but especially on the underside the paint application is a little heavy and so some printing would have been welcome.

The paint application is good across the model. I had thought that the grey belly was incorrect but it looks like in 1987 the natural metal belly was repainted grey. The engine insides have also been left unpainted. This allows the detail of the engine fans to be obvious but they are clearly the wrong colour. Build quality is an area of no concern. All the parts, including the fine undercarriage, are attached well.

The addition of a Surinam DC-8 in 1:400 is very welcome and this model just sneaks past the scoring to record a decent total, but once again that is largely due to the excellence of the mould and the ability of the factory to put the model together. The obvious weakness at Aeroclassics is the design element. All the errors on this model are readily apparent when looking at a couple of photos available at websites such as JetPhotos.net, which I believe is available even with the Great Firewall of China in existence.