Aeroclassics is having something of a retro year having brought back into use several moulds that were long thought lost. I have already reviewed one of the 747 classics and have blogged about the return of the Tu-154, but also in the mix is the 727-100 a mould that hadn’t been seen since 2014. I’m a big fan of Mexican airlines, especially deregulation startups, and it seems Aeroclassics loves TAESA too as this is their eighth release for the airline.

TAESA (Transportes Aéreos Ejecutivos) Lineas Aéreas was one of the first start-ups to try and break the duopoly of the Mexican market when deregulation kicked in at the end of the 1980s. It was formed as a partnership between Alberto Abed and the industrialist Carlos Rhon, using Abed’s existing Air Taxi operation, and started scheduled services in 1989. By 1992 TAESA had grown into Mexico’s third airline and was challenging the big two using a fleet of 22 Boeings.

The basis of the initial fleet were old 727-100s, but these were joined by new leased 737-300/400/500s, 757s, and even a 767-300. TAESA benefitted from cheap leasing rates, a non-unionised workforce and the weakness of its competitors, however the 1994 economic crisis that devalued the Mexican Peso had a massive impact on the airline, now forced to pay leasing fees in USD at uncompetitive exchange rates.

The fleet was pared back and costly modern aircraft were replaced with cheaper trusty stalwarts such as 727-100s, 737-200s and DC-9-15s. TAESA was still making an operating profit but its high debt was causing concern and it was saved in May 1997 by a Singapore based consortium. Unfortunately, the new start for TAESA was brief as the crash of a DC-9 in November 1999 led to the airline’s grounding. The grounding was highly political and partly related to ongoing disagreements with unions but had the effect of putting the airline out of business permanently.

TAESA’s 727-100s came from a wide variety of disparate sources and were far from a homogenous fleet. Of the 12 operated over the years the Boeing customer numbers tell this story as there were no less than eight different ones spread about the twelve aircraft.

This 727-31 was delivered new to TWA on September 21, 1964 as N847TW. It served with them until 1989 when it joined Private Jet Expeditions as N727PJ. It was sold to Explorer Holdings and leased to Capitol Air Express in late 1993 prior to joining TAESA on lease in July 1994. It appears to have served with the airline until the end and was seen withdrawn from use at Toluca minus its engines in February 2000.

The 727-100 has not gained the attention that its longer brother has in 1:400 scale, but has still had 5 separate moulds made for it. This one has been used by far the most regularly, with 142 models prior to its recent rebirth. That is almost three times as many models as the other four moulds combined, so it is just as well that this is the best 727-100 to date. 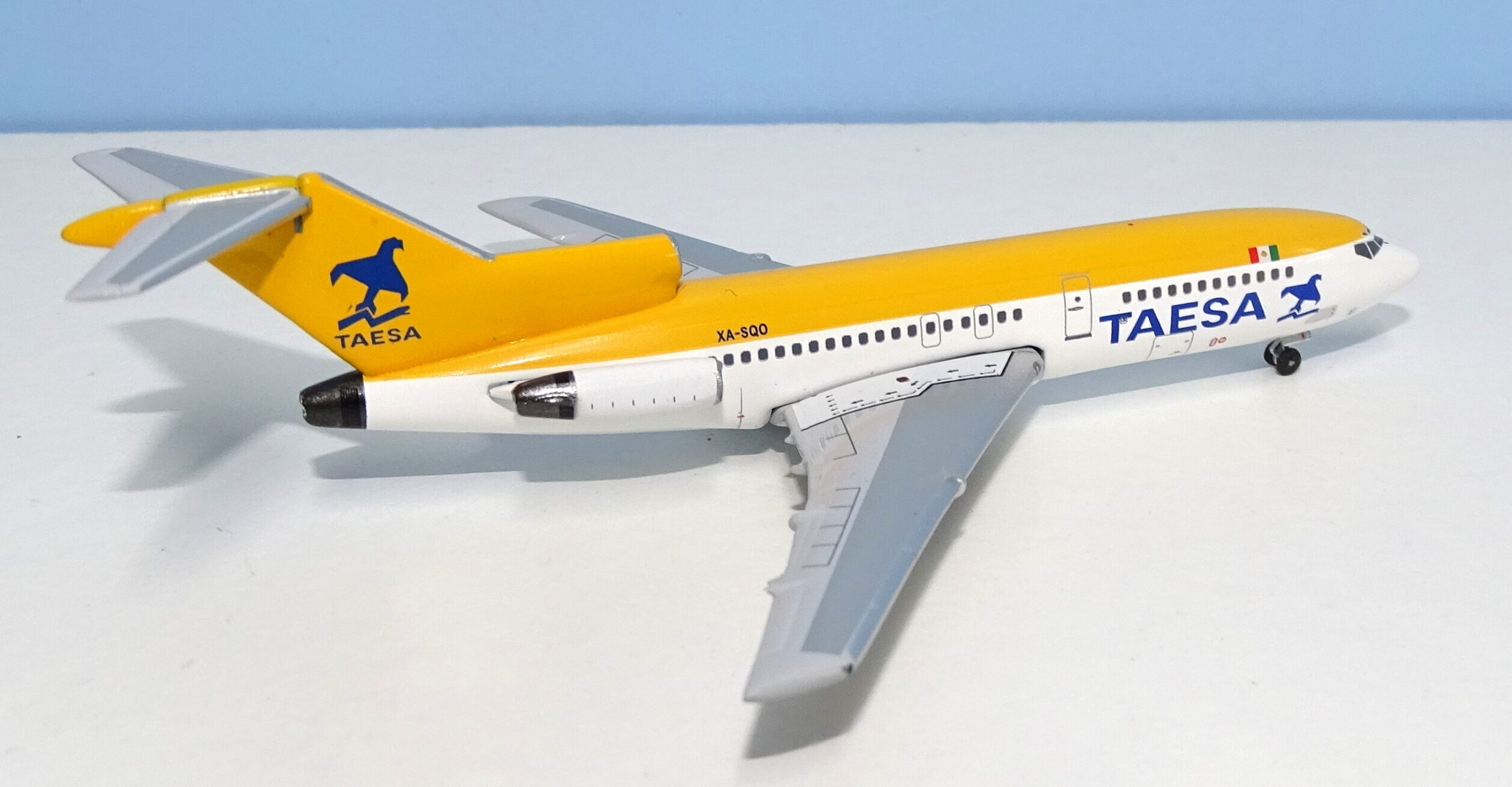 The nose of the Aeroclassics mould is good and the profile of the cockpit region also quite accurate. This is a cradle mount mould so without slot in wings there is a seam join between the fuselage and wings. Unlike on the 727-200 mould, by the same manufacturer, it is a square cut seam that wraps under the wings. This means the fairing line isn’t well defined but I know that some find the larger seam on the 727-200 mould to be worse, even though it follows the real fairing line. 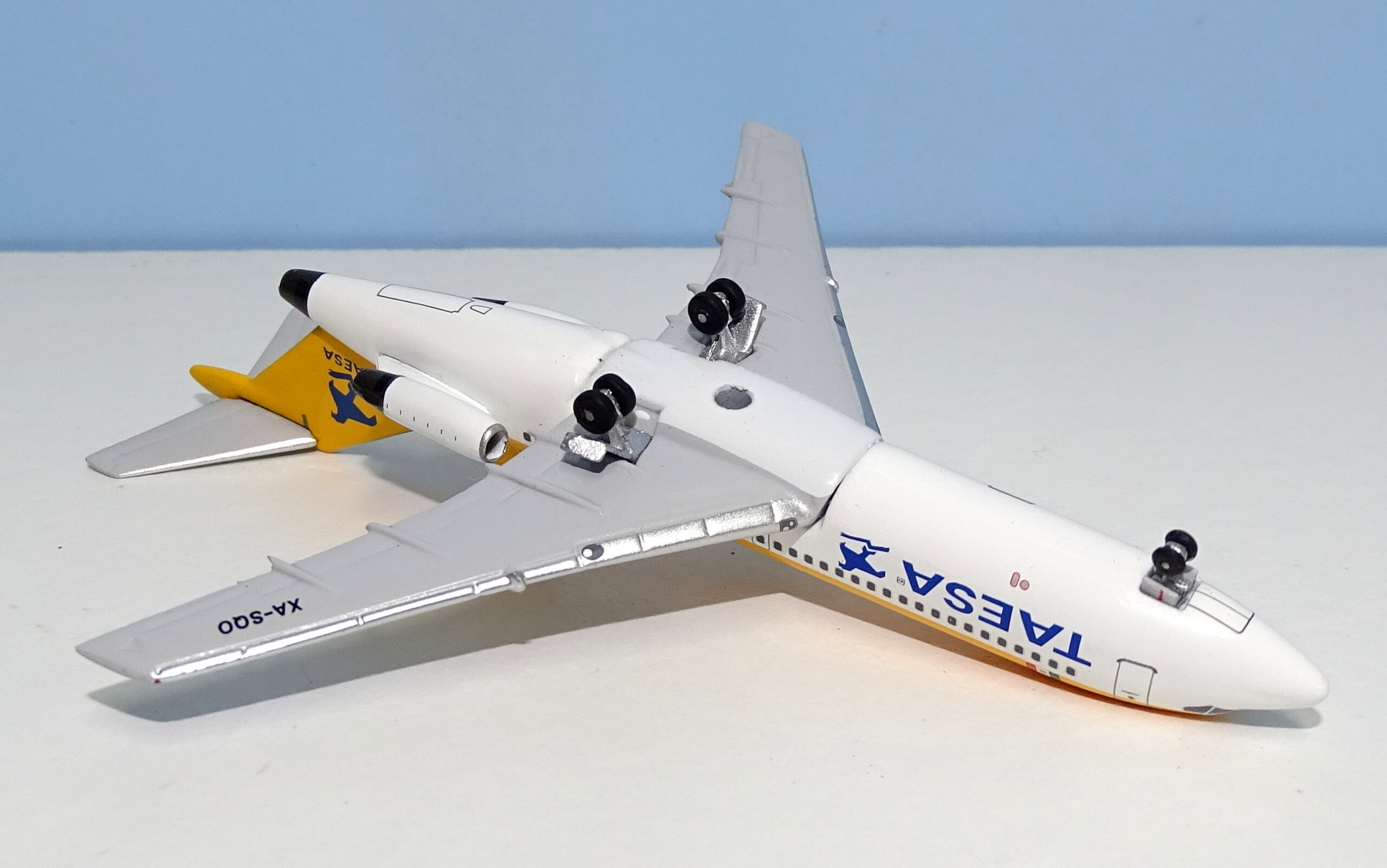 The maingear of the Aeroclassics 727 is excellent. The gear doors are a good size, well positioned and angle upwards correctly. The side engines are also very well shaped and have well detailed exhausts.

Unlike the series 200 mould this version is not criticized anywhere near as much for the tail region. Even though it shares some of the same minor criticisms, such as the front edge not changing its angle enough at the top and the seam line where the horizontal stabilisers are fitted as one piece, it doesn’t share the biggest issue i.e. the number two engine exhaust is better proportioned. It is also important to mention that the number two engine intake is correctly not circular (a unique feature of the 727-100) as it is incorrectly on the competing Dragon Wings version.

Overall, even though this is an older mould than the Aeroclassics 727-200 this 727-100 is actually superior. It might not be perfect but it captures the aircraft well and would I think only be beaten by a seamless version of the mould. As it is although seamless versions exist for both Dragon Wings and Aviation400 both of those have other inaccuracies that make them inferior to this good old casting. 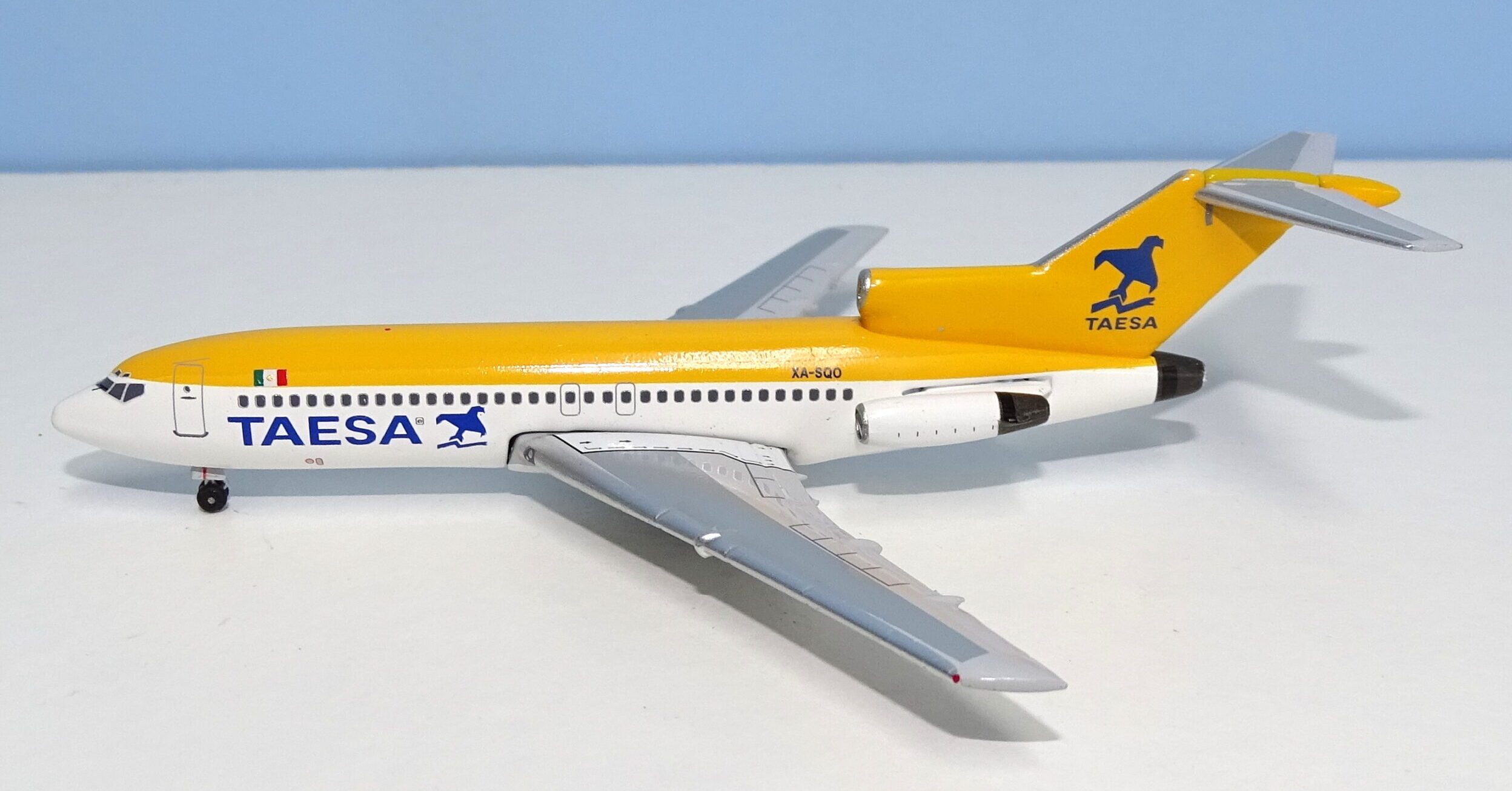 TAESA had two distinct liveries throughout its history. For the majority of the time it used a rather bland Euro-white scheme with a bright yellow tail (some aircraft, such as the 737-500s, never received the yellow), however in the last few years of the airline it adopted a much more exciting livery which had the yellow tail colour pushed down and along the entire fuselage roof. The 727-100 as a type flew with the airline throughout its history and so wore both schemes, although XA-SQO was one of only two or three that acquired the yellow top.

The TAESA logo is also interesting. I’m not certain what it is supposed to represent. To me it looks like an unusual airplane-like hawk that is landing on a snake (the zig-zag line appears to have a mouth at one end).

The yellow colour being used here is slightly too dark but fits quite a few of the available photos so I’ll give it a pass. The model is obviously a lot cleaner than the real thing ever was as 727-100s were notorious for having dirty tails and rudders, which led to some airlines leaving the latter unpainted. I don’t have an issue with the colour of the dark blue titles or logo, they match nicely. Despite the colour this is still quite a simple scheme. The yellow roofline is well positioned to intersect through the doors above the door windows and end at the tailbase.

The bird and snake logo are correct and well positioned plus the titles are well sized and use the correct font. The only detail I can see that is missing is the small SQO on the nosegear doors.

This 727 matches the printing detail of most Aeroclassics 727s, which means there are good parts like the extra flap details and emergency markings on the overwing, which look good. It also means that the tail is a little bereft of detailing as there is no printing of the rudder line. Aeroclassics relies on the mould detailing for that but it is rather hidden by the painting. 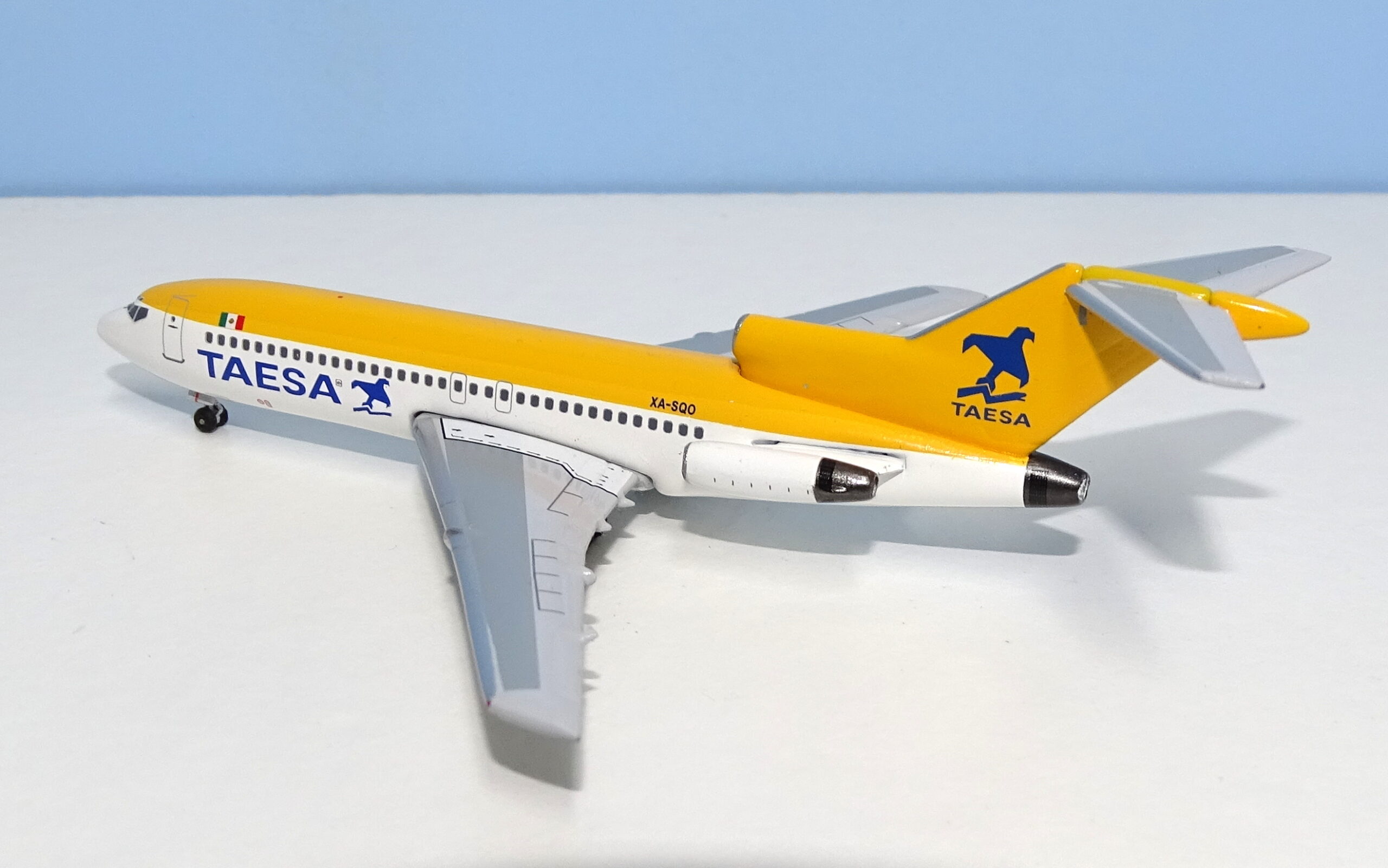 The cockpit has been a recurring area of concern with many Aeroclassics 727s and this one shows that it is not just a problem on the series 200. The central cockpit windows are not high enough, which gives the aircraft a rather stern look. It is accentuated as the yellow line should meet the top straight line of the cockpit windows but as the print line on the cockpit top is not straight it doesn’t.

Construction of the model is very good, although it would be nice if Aeroclassics painted the insides of the engines. The fanblades on the numbers 1 and 3 engines remain unpainted plasticky light grey.

The return of the 727-100 is most welcome as there are many left to be made and the type has gotten no love from Gemini who have the only other active mould for the type. I’m looking forward to seeing it get plenty of usage for important historical airlines such as Pacific and Piedmont. As far as this model goes it is a really nice release built and printed to the usual Aeroclassics standard. You certainly know what you’re getting when you buy Aeroclassics and for this sort of model that is fine by me.

Inflight200 has announced the release of 8 new diecast aircraft models scheduled to be available in November. Several retro models are part of the lineup including an Eastern DC-10, General Dynamics CV-880, World Airways B747-200 […]