Thus far I’m thankful to be able to report that the primary impact Covid has had on me personally is that the flow of new models has been slowed significantly. Packages are still getting through to New Zealand but at a much-diminished rate. Although this SAA 767 is a 2019 release it is a new model to my collection, having arrived last week, and in the absence of newer material a worthwhile review example. Aeroclassics has recently released less all-new 767s but is still using the mould and I hope to see plenty more, especially African examples, in the near future.

The collapse of South African Airways on May 1 had been long coming and brings to an end the history of yet another national airline. SAA is just one of many formerly well-run airlines that has ceased operations after years of problems that have blackened their reputations. It joins famous names such as Viasa, Ecuatoriana, Air Afrique, Air Jamaica, BWIA and others in the dustbin of history. I doubt it will be the last with several other grand names such as Alitalia, Thai Airways, Air India and PIA on continuing life support.

The existing A300 fleet was mainly used on high density domestic flights within the Golden Triangle, between Cape Town, Johannesburg and Durban, whereas the 767 was used mostly on longer range routes into Central Africa and the Indian Ocean. Even so the later A300-600R would have sufficed for longer range routes. It appears that SAA took advantage of an opportunity when it acquired its first 767 ZS-SRA.

The aircraft was originally intended for LAM of Mozambique but was not taken up by them, presumably due to financial reasons, and instead joined SAA, named ‘Protea’ after the national flower of South Africa. ZS-SRA served alone as the only 767 in the fleet until 1997 when a pair of 1984 build ex-Egyptair 767-266ERs were leased, which became ZS-SRB and ZS-SRC.

The two ‘new’ frames service careers overlapped with SRA’s for under three years as SRA finally did join LAM in March 2000 as C9-BAF. By this time the A300s were being replaced with smaller 737s allowing for increased frequency on Golden Triangle routes. The 767s continued their international routes until March 2004. ZS-SRA herself served with LAM until mid-2004 when she was leased by Aeromexico. Following another decade of service, she was stored at Victorville and broken up in 2015.

Aeroclassics have graced us with 59 Boeing 767-200s, since the mould debuted in the last third of 2018, which is nearly half of the 131 767-200s made in total over the past 20 years. I own 23 of them, from 38 models of the type in my collection. The mould certainly isn’t flawless but it hits most of the right marks. Certainly, suggestions that another 767-200 mould is required are well wide of the mark.

Most pleasingly the Aeroclassics 767 has an excellent fuselage. There are no issues with the entire length and especially at the nose things are very 767 like. The control surfaces are also topnotch. The wings attach firmly to the fuselage, as slot in elements, and are nicely shaped and detailed. Likewise, the vertical stabilizer has the tall angular shape befitting the type. So, from a general body shape and plan form this mould is scoring top marks. 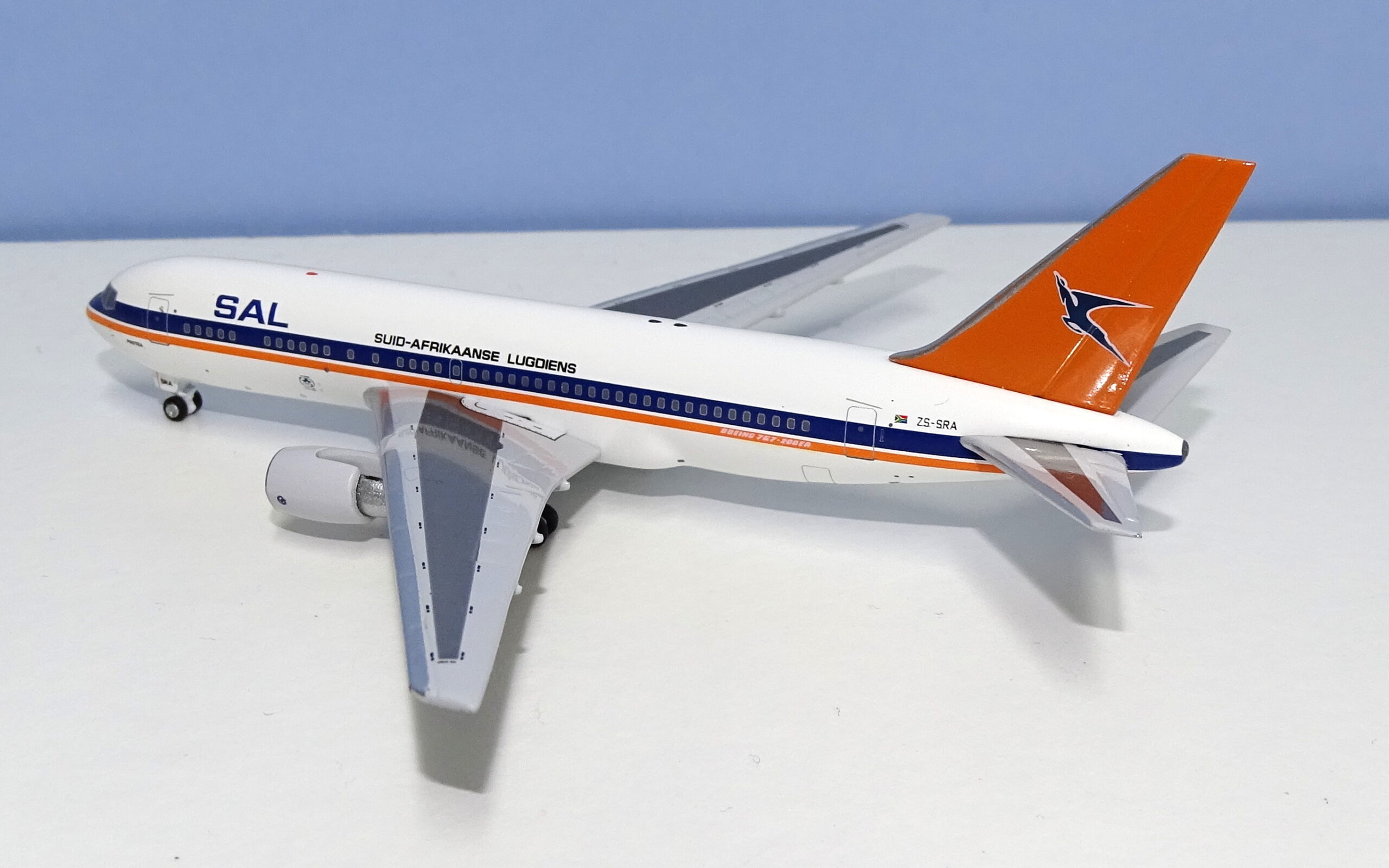 It is in the details that Aeroclassics struggle a little and there are several inaccuracies. The Aeroclassics’ engine pylons do not reach far enough to the rear and the shape of the rear engine nacelles isn’t correct at the upper and lower margins. The engines themselves are rather generic, basically a one size fits all approach. This aircraft was powered by Pratt & Whitney PW4056s and they should have a longer exhaust without the cone being visible.

The landing gear also is pretty good but not perfect. The nosegear tyres are a little large and the maingear doors the wrong shape, especially where they meet the fuselage. Aeroclassics famously refuses to look at the addition of aerials to its models so this 767 lacks all three but being from the early 90s it wasn’t fitted with any domes or bumps along the roofline anyway.

With some relatively minor changes, since the areas of improvement are all add-ons, this mould could really sing. As it stands it is on par with the older 767-200 moulds from JC Wings and Dragon Wings, which are both solid moulds anyway.

The Apartheid era SAA livery maybe connected to a loathed regime but is still generally well thought of and certainly quite attractive. Unlike the A300s ZS-SRA, the only one of the three 767s to wear this livery, was painted white beneath the cheatlines and had white engines too. Aeroclassics has this half correct as the belly is white but the engines are not.

The bright orange and dark blue colours are accurate and very attractive. The cheatlines are a tiny fraction too low but this doesn’t really have any impact on the appearance of the model. Arguably the Springbok on the tail is also a little too erect, if you follow the angle of its back.

Most of the other livery details are broadly accurate. The main titles are correctly in Afrikaans on the port-side of the fuselage and English on the starboard side. The spacing of the Afrikaans titles is not quite correct as they are too short on the model. They ought to start above the widely spaced windows forward of the wing but start at least the width of two windows too far back. The text is fine but it is just not quite as widely spaced as it ought to be. The English titles on the right side are accurately spaced.

The aircraft name, on the lower forward fuselage, IATA symbol on the lower mid-fuselage and aircraft type text, inside the orange rear cheatline, are all present and correct. 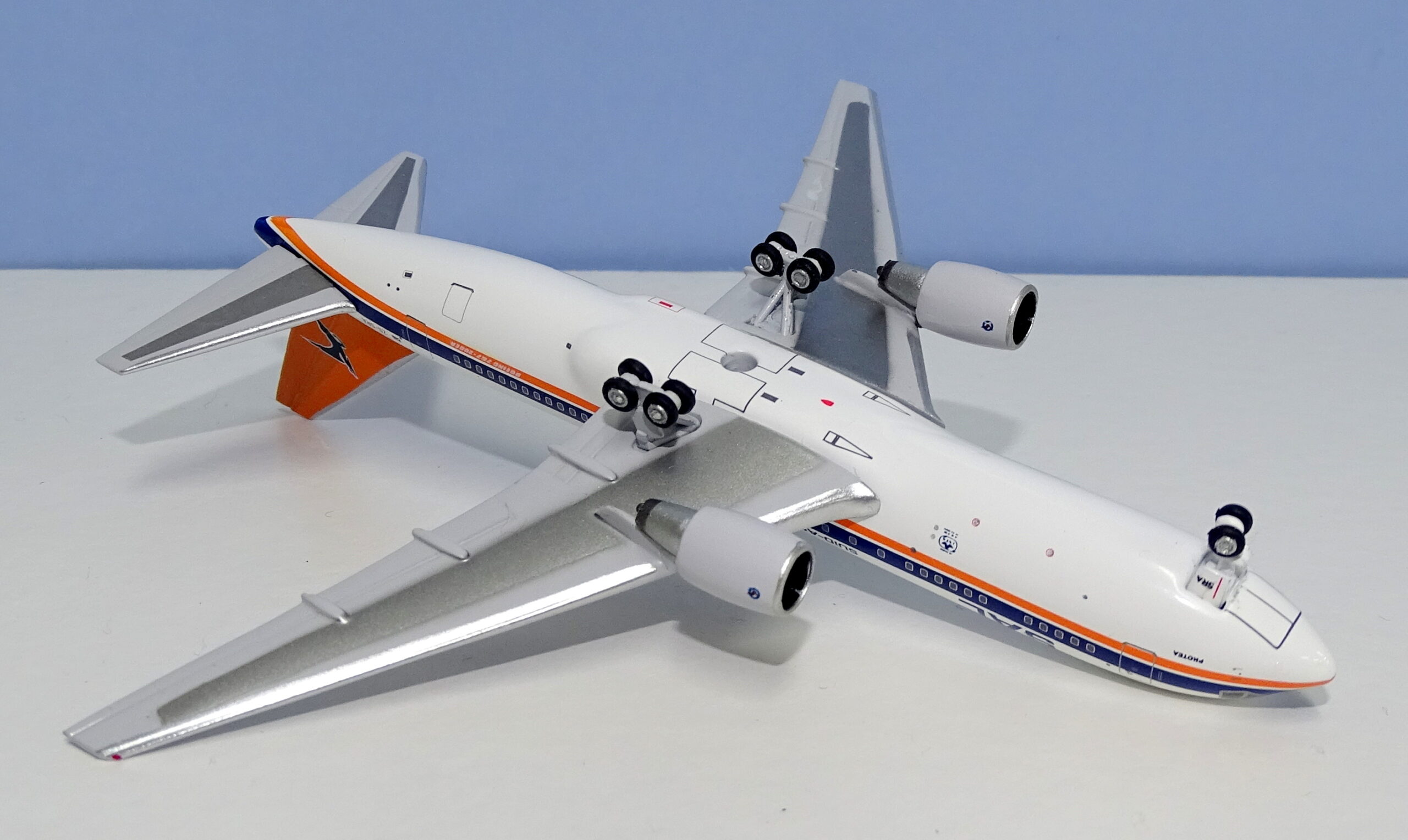 Being one of the later 767 releases from Aeroclassics this model does not present with any of the early printing errors – missing maingear doors, overwing exit markings for two windows and too short doors. It does however still ignore the rather obvious wingroot navigation lights, which is disappointing. It might not have quite as much printing detail as models from NG Models or JC Wings but what there is has been printed quite well.

Construction wise this model is a tale of two halves or at least of two wings. The port side is perfect whereas the right side is not so. The right-wing wiggles somewhat and isn’t firmly attached. It isn’t so weakly attached that it will come off however. More annoying is that the right-hand engine is not fitted to the engine pylon straight and hangs downwards. This has been something of a recurring issue with the Boeing 767 and I can’t say I’m impressed.

None of the now 7 Aeroclassics 767s I’ve reviewed, spread over a 20-month period, have scored more than 26 and aside from one example most of the points lost have been in the printing and quality control area. It is clear that there is a fine mould here but as has often been the case a somewhat sloppy approach to design and build has cost an otherwise great model points. Nevertheless, this is one of my favourite Aeroclassics 767s to date and I look forward to seeing an Air Zimbabwe example soon, I hope.

I must be getting old for an A340-300 to be almost considered a classic, and admittedly Gemini Jets have made an aircraft/livery combo that dates only to 2016 and only incidentally stretches back to the […]