I admit I give Phoenix Models a bit of stick, and I continue to be perplexed why they appear so popular amongst collectors when most of the time there are superior alternatives. It isn’t like they have any unique moulds, that they use anyway, or produce many liveries that aren’t made by others, usually on superior moulds too. Anyway, that doesn’t mean their models are rubbish (although the 747s definitely are) and one of their best, and one of few competing still at the highest level, is the Airbus A330. So, for my 33rd model of the year, but my first Phoenix model of 2020, let’s see what they can do with this attractive liveried A330.

The Chinese airlines never miss an opportunity to paint up their aircraft in special schemes, which is one of the reasons I collect them. Often the liveries are intricate and beautiful, the complete opposite of the dour Communist party setup and boring national flag. Sporting events are one of the more common excuses for a special scheme and since 2021 is the 31st bi-annual World University Games (or Universiade), and it is being held in Chengdu, it makes perfect sense for Chengdu based Sichuan Airlines to be sporting a special scheme.

The Universiade is an international multi-sport event, basically an Olympics for University athletes, and the largest in the world outside of the Olympics itself. China has in recent times become a regular location for the event and has hosted it twice before in 2001 and 2011. So, you can expect another special Universiade scheme in 2031! In the previous years it was hosted in Beijing and Shenzhen. Both times Shenzhen Airlines painted fleet members in special schemes. The first time in 2001 it was a 737-800 that gained a balloon-centric livery and in 2011 it was a pair of A320s. All three models have been made in 1:400 by Dragon Wings and Skywings respectively.

The aircraft chosen by Sichuan Airlines is the Airbus A330 B-5945, a 2014 build aircraft leased from Intrepid Aviation Partners. It is one of 16 A330s serving in the Sichuan fleet: six of which are the short series 243, two 243 freighters and the remaining eight series 343s. The aircraft is unsurprisingly named Chengdu Universiade and as with many Sichuan special schemes of the past has a livery featuring the Giant Panda, which is native to the Sichuan province.

The first flight of the new livery was on November 28, 2019 and the aircraft has not only been used to advertise the games but also as a focal point for relief efforts during the Covid crisis. It was used on March 21st as a transport for medical personnel assisting Hubei. Of course, the whole Covid crisis must call into question the very games the aircraft is advertising if a vaccine cannot be found. There is time though as the games aren’t supposed to take place until the 18th to 29th August 2021. Presently the games are still on and with air traffic in China at least beginning to return to normal it seems likely many thousands will see the Chengdu Universiade Airbus. 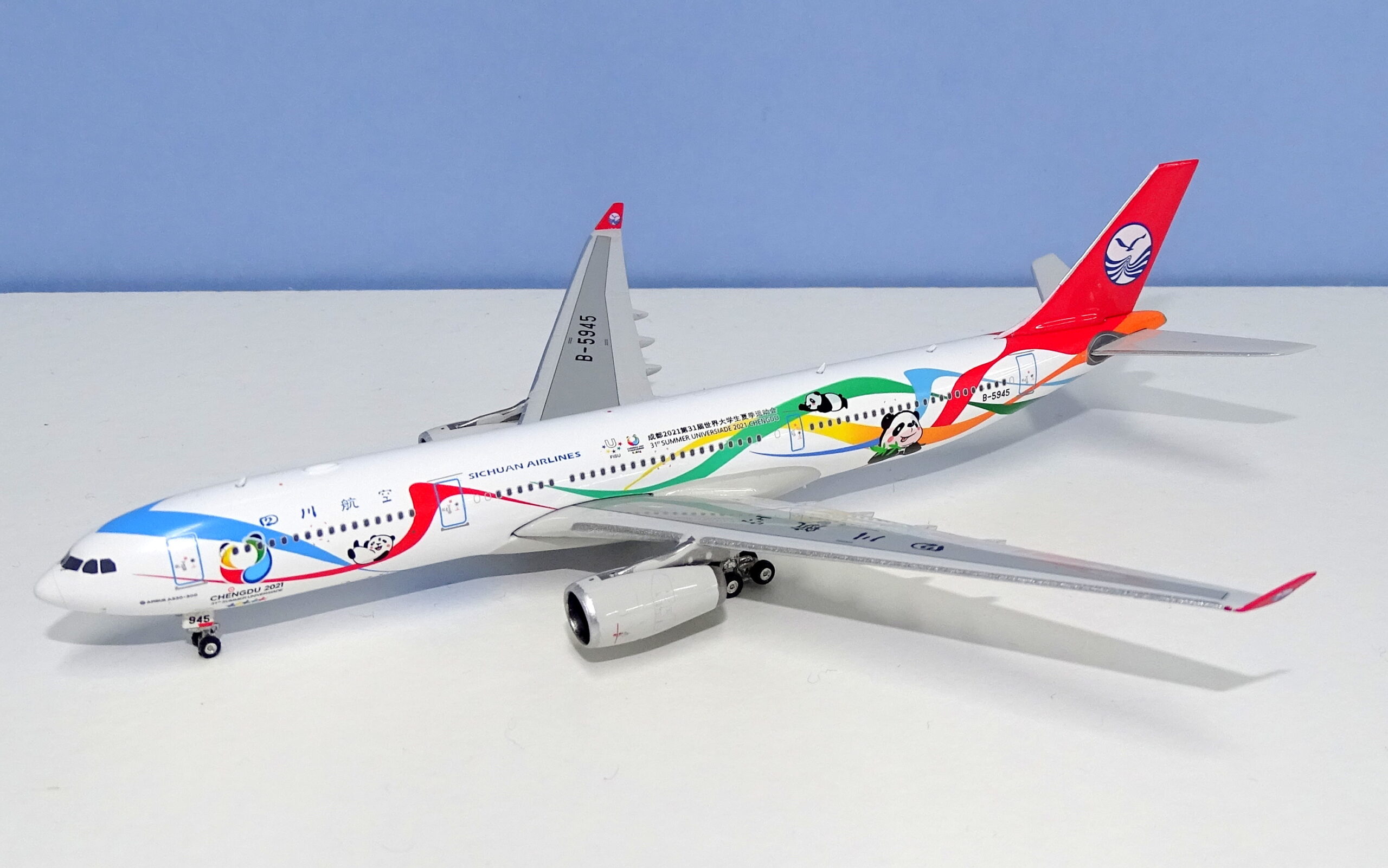 The moulds for the Airbus A330 are one of the most competitive in 1:400 with 6 active versions. Of the 56 non-freighter A330s I own Phoenix A330s represent 21 of them, the highest number. Aeroclassics comes next with 17, followed by Panda Models with 11. That isn’t to say the Phoenix is the best but it illustrates that I do hold it in high regard (and that Phoenix release a lot of Chinese A330s).

This mould was introduced in 2010 replacing the older cradle mount version and still competes well with newer A330 moulds from Aeroclassics, Panda and NG Models, whilst easily beating the JC Wings/Gemini and Aviation400 efforts.

The nose and cockpit are one of the best points, literally. It reproduces the classic Airbus widebody nose well and is sharper than that of the Aeroclassics mould. The nosegear leg is the correct length and well detailed, although the nosegear bay doors are too large. The tyrehubs are of course a Phoenix strongpoint and look excellent. 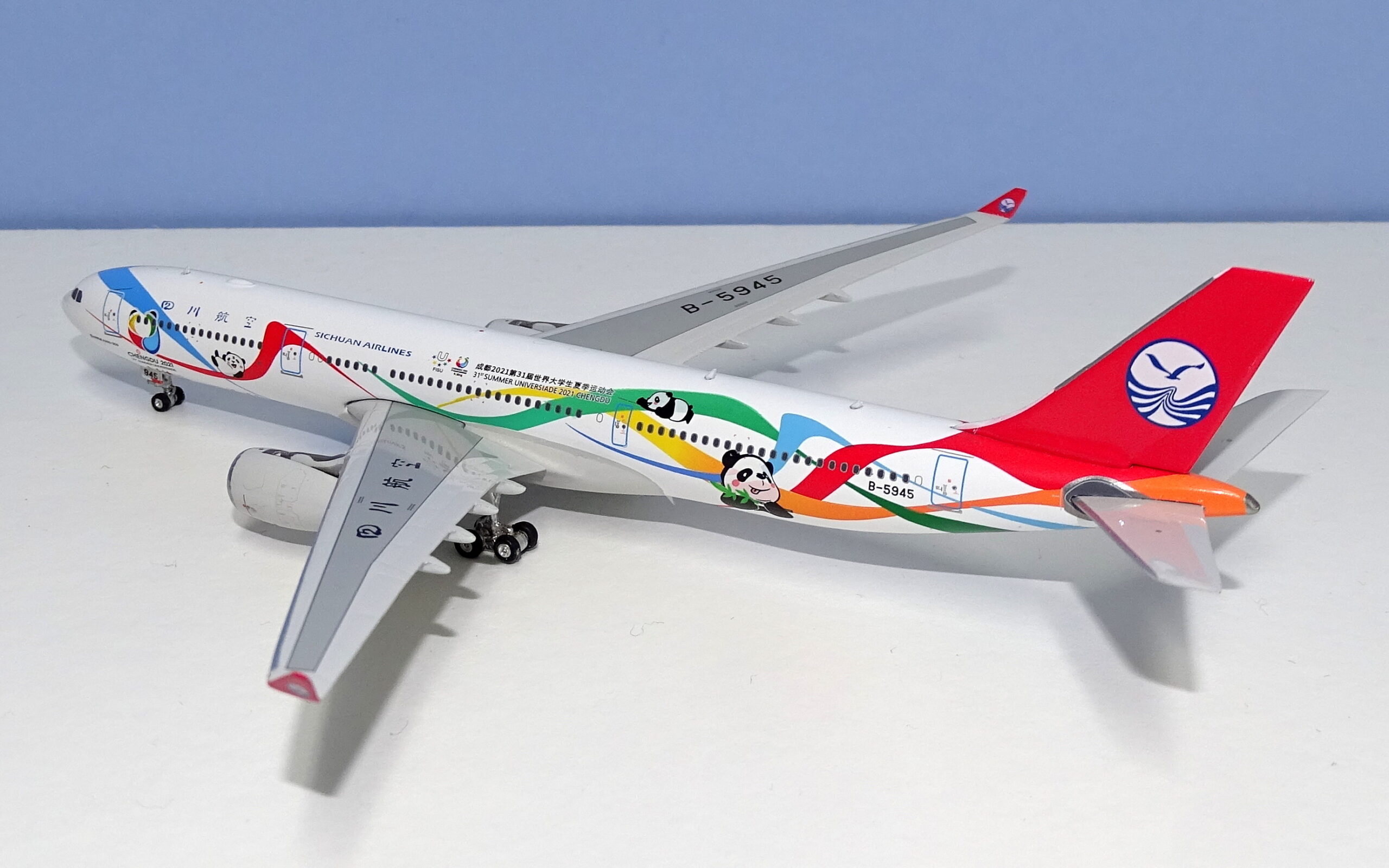 The wings and mid-fuselage are exemplary, at least from the side and above. On the underside of the fuselage the mould shows its age with very little in terms of detailing of the scoops or anything else. The maingear legs are also a little chunky, especially between the tyres. The engines are well shaped and have excellent pylons keeping them well above the ground. 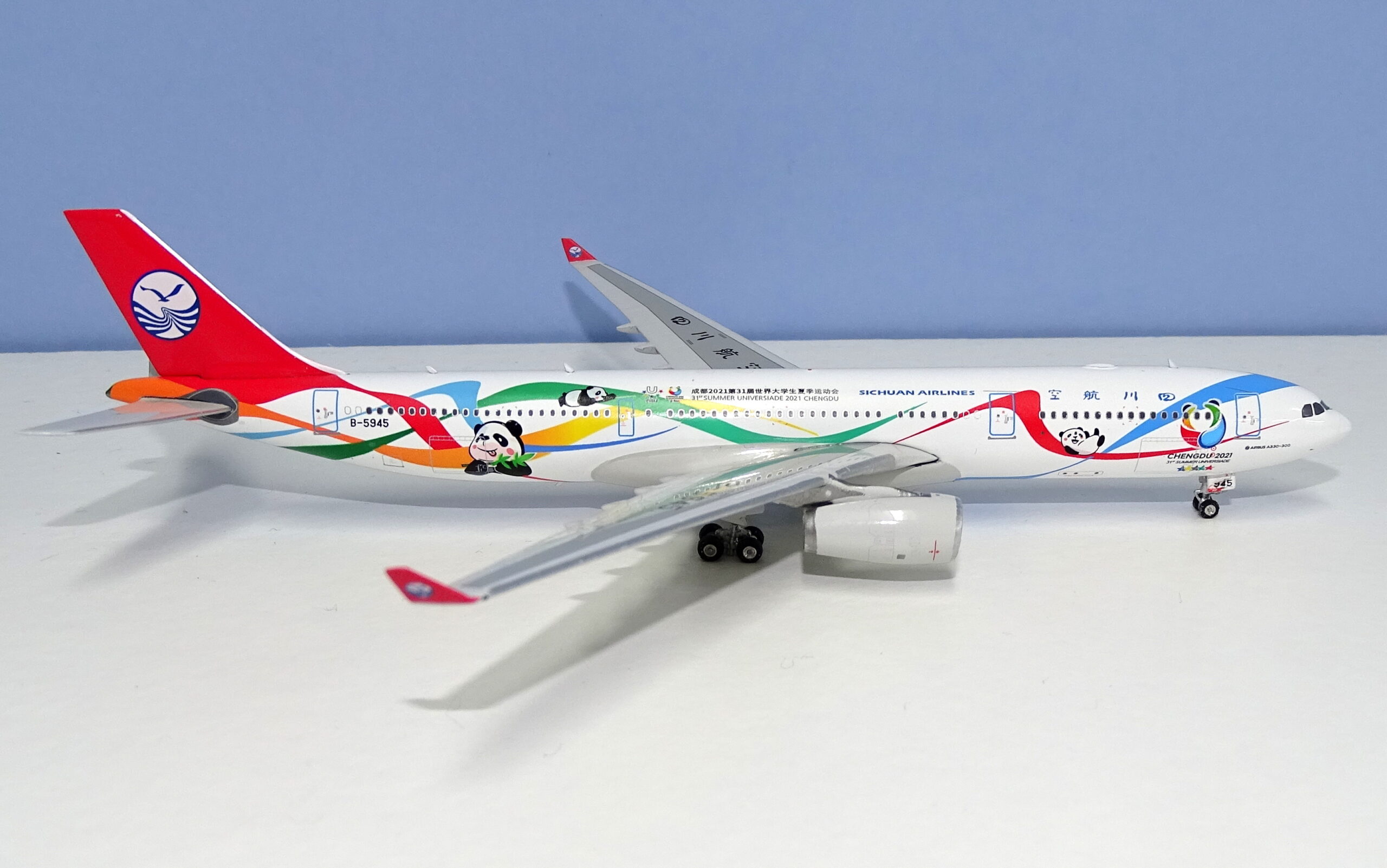 The mould has an impressive array of aerials – seven in fact, which is close to a record for a 1:400 scale model. Four of these are underneath and they all look very good. Another plus point for the mould is the moulded in dome on the forward roofline, which is not an add on as with most moulds.

I really like the look of the Phoenix A330. Arguably it is slightly inferior to some of the competition in the finer details but these are largely not very noticeable. I certainly don’t have any issues at all recommending it, which is something I can’t say about many Phoenix moulds anymore. 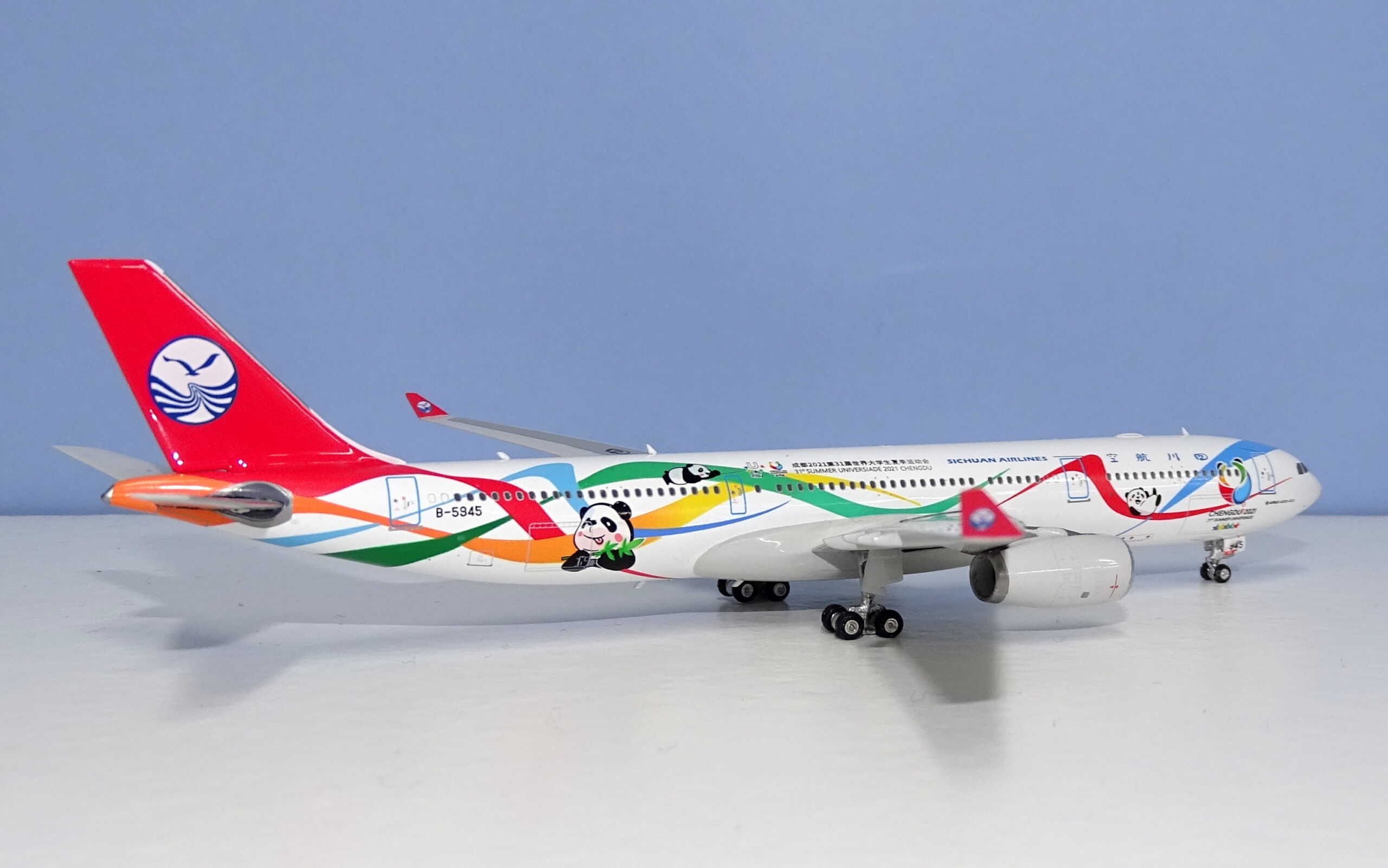 Special liveries introduce plenty of scope for complex printing that tests even the amazing quality of modern 1:400 models. This livery consists of a variety of coloured ribbons along the side of the fuselage with the furthest forward blue one wrapping all the way around. Adding to this effect is the panda styled Chengdu 2021 games logo, plenty of small text and a variety of cartoon Pandas (similar to those on several Sichuan A350s).

In different photos taken with different light the colours on this scheme can appear quite dark or much lighter. I have noticed that Phoenix often choose lighter shades to both Aeroclassics and JC Wings, which can make colour matching a fleet of an airline quite troublesome. This is the case with both Hainan Airlines and Shanghai Airlines releases by the three manufacturers. I often prefer the Phoenix colours. 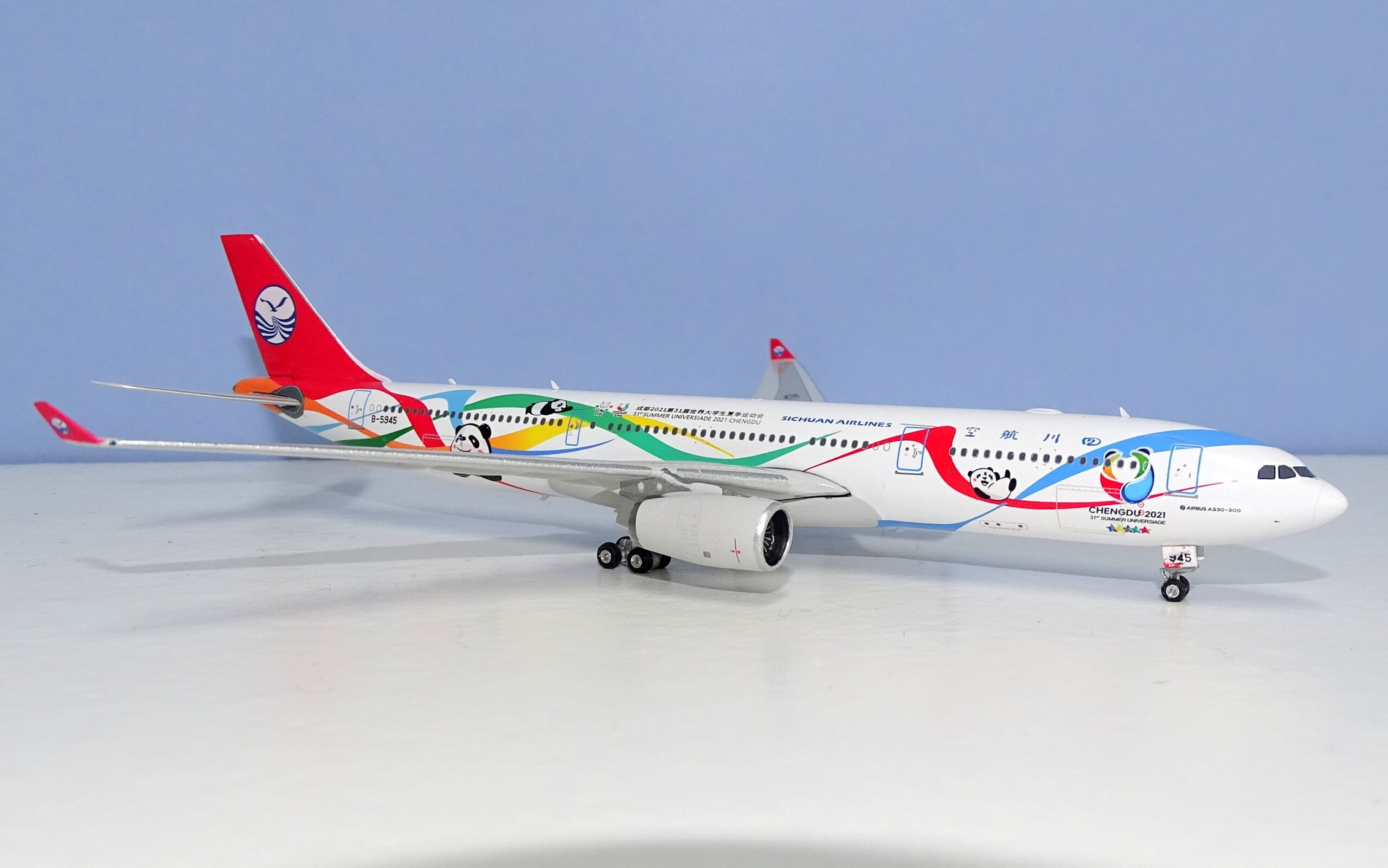 Broadly I think Phoenix have done a good job here with the colours. The only one I am not happy with is the large blue band at the front, which is too light. Additionally, the blue in the Chengdu 2021 logo is too dark. The major blue band and Chengdu logo are also the only areas that are obviously incorrect in terms of placement.

On the left side the Chengdu 2021 logo is too low and the ears are not both intersecting the blue as they should. The blue ribbon is also too far forward at the top edge. On the right side the Chengdu logo is well placed but the shape of the blue ribbon is wrong. It is the posterior margin shape, which is not angled correctly. To be honest these are minor errors and do not damage the look of the model. 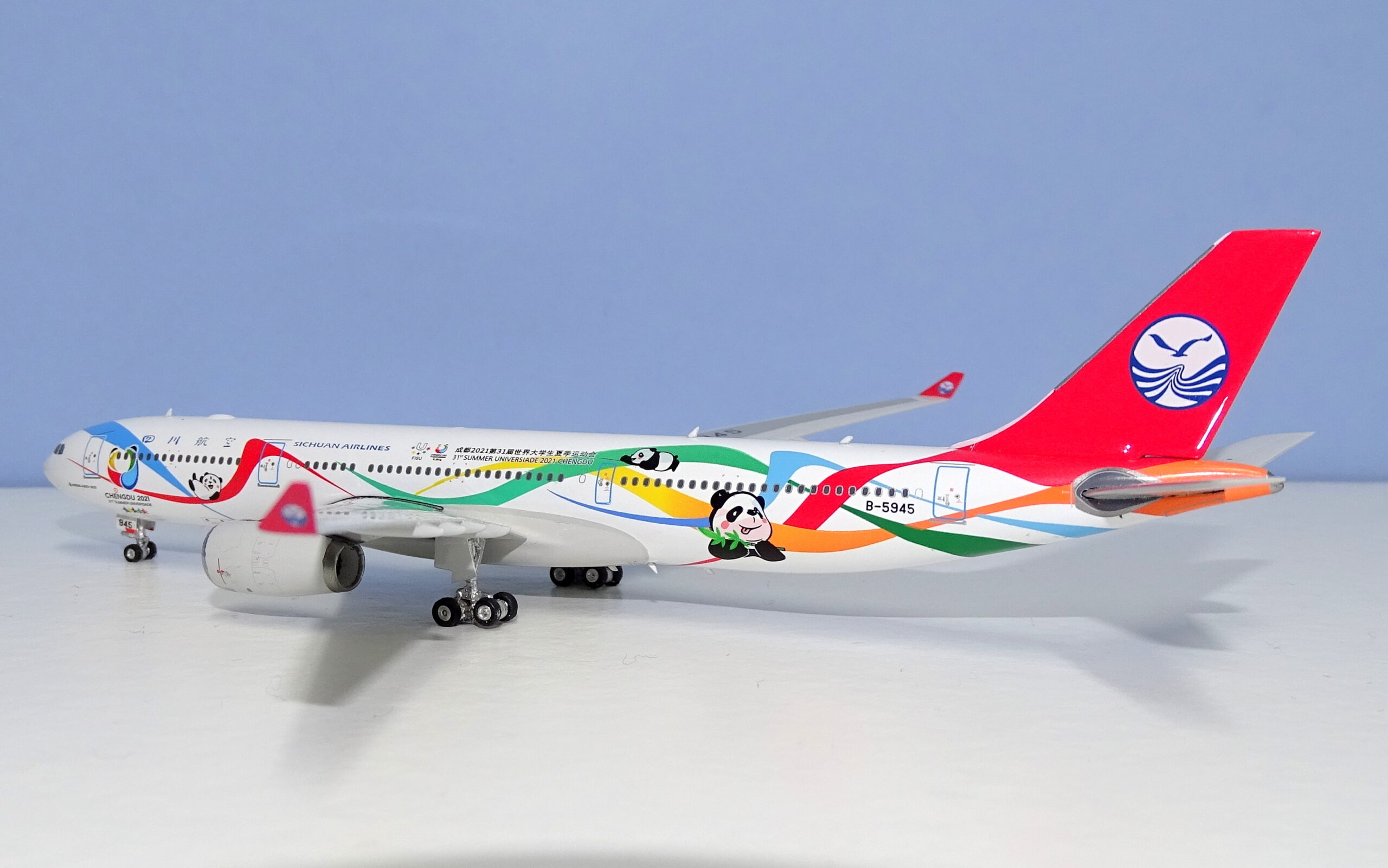 The remainder of the livery is perfectly represented, which is no mean feat considering the number of individual elements involved.

I do not think that in terms of printing detail Phoenix can match NG Models or JC Wings, but on this model, they try their best with a pleasing result. Some of the printing like the nosecone radome is very fine. They even try to print quite a bit of detail on the underside although the maingear doors oddly sit in isolation from the actual undercarriage. Unfortunately some of that good work is undone with a printing error on the nosegear door, which has some of the 9 and 4 missing.

Another thing I noticed is that the painting of the engine outer rims is rather sloppy on the left side. This is the sort of tiny detail that would have got Jon Champs excited but doesn’t bother me nearly as much. You really need to look close to notice it. 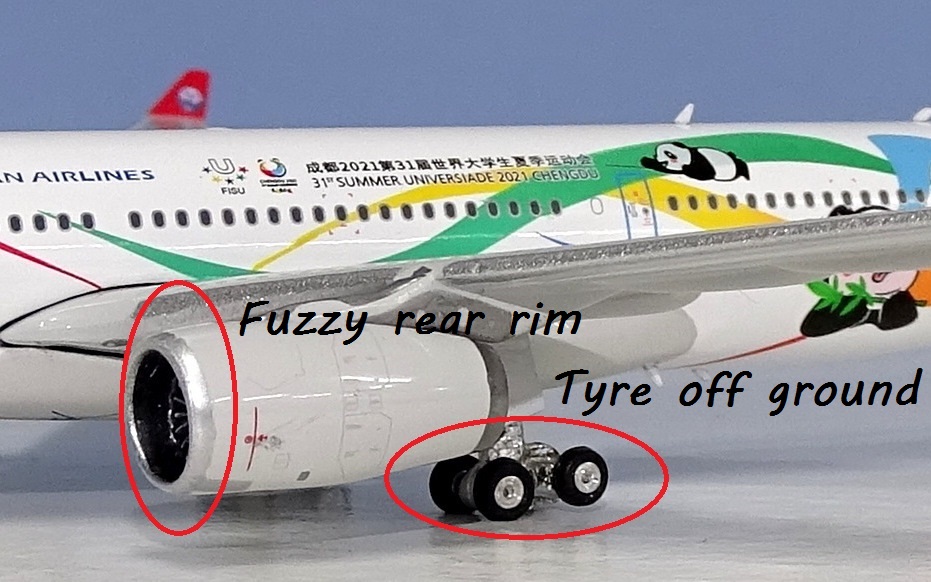 Onto the construction and it has both wings attached, which is a start, but as has been reported previously by others sometimes Phoenix doesn’t attach the wings fully leaving a noticeable gap between the wing and the fuselage at the rear. This model is afflicted with this imperfection on the left side. You don’t tend to notice it from the side but it is more obvious from the top. 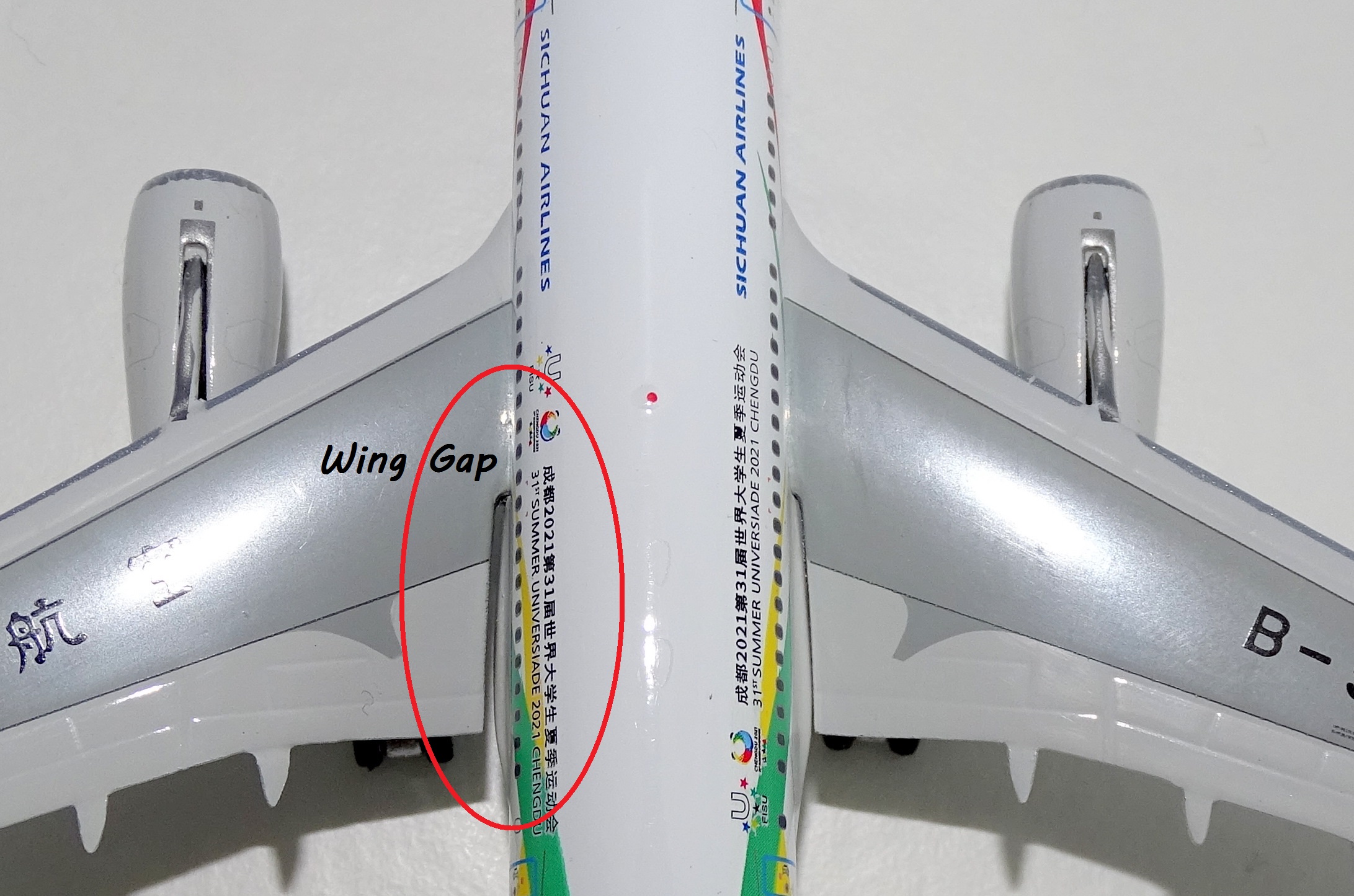 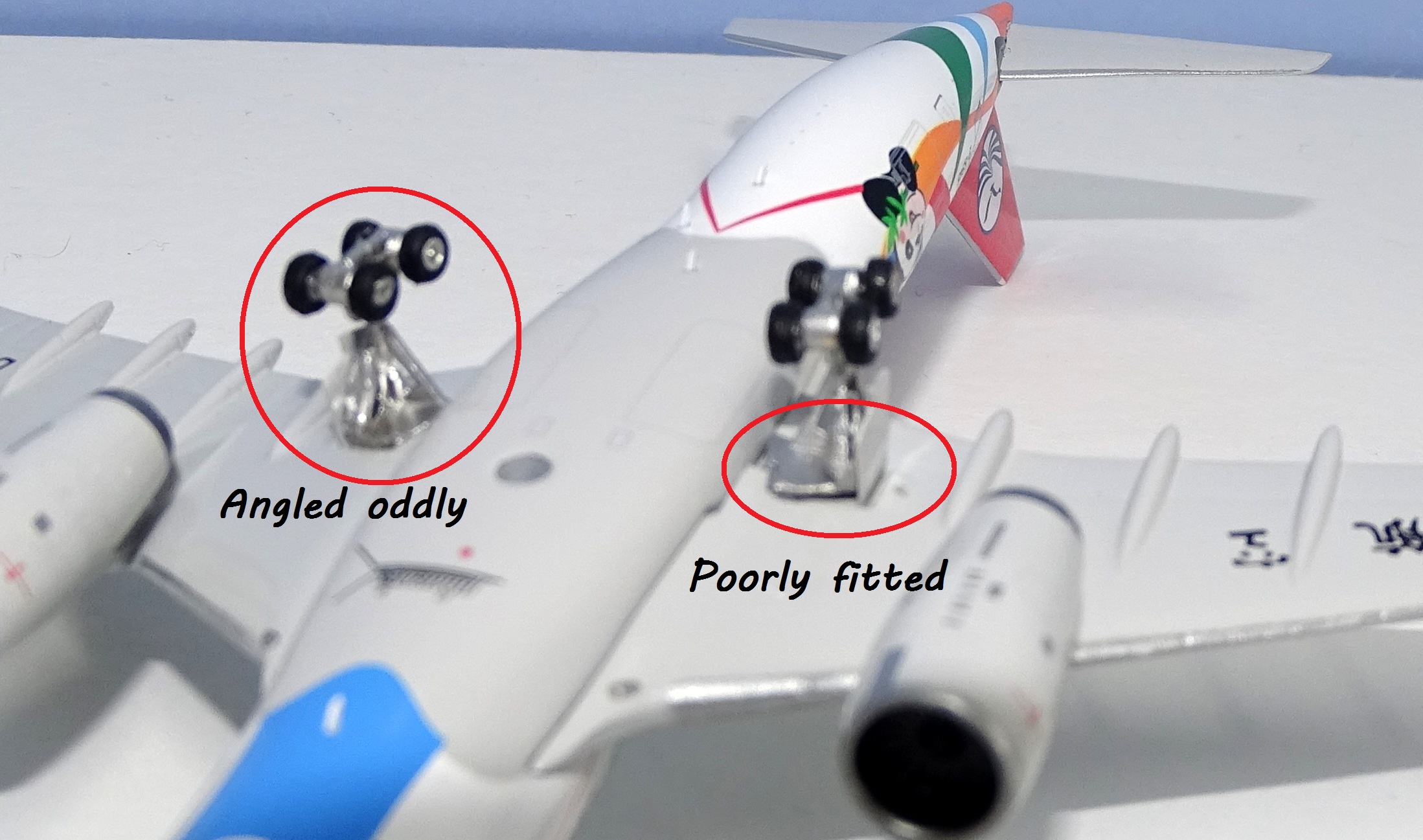 In addition, the maingear trucks on this model have been poorly fitted. The right gear truck is not fitted flush to the wing and so bends in slightly from the front view. The right gear does not sit flat on the ground, with the rear tyres in the air.  Once again none of these aspects are major in themselves but altogether they damage the model and they do suggest a lack of care in the factory assembly process.

This is just an ok model, but if you don’t pay close attention it looks near perfect. That is probably why Phoenix seem so popular yet score poorly in detailed reviews and mould reviews. If you aren’t being critical their models are fine. However, this is a detailed review and Phoenix have lost 4 points through 5 entirely resolvable quality control issues. It is still worth adding this model to your collection, as you might get a perfectly built one and the only competition is the announced JC Wings version. That is on an inferior mould, plus who knows when it will actually be released? For me Phoenix remain flakey. I hear lots of complaints about Gemini but I can’t recall receiving a Gemini model with this many separate print/quality issues. Phoenix A330s should be solid as a rock. That they are not is concerning.