NG Models’ 757 mould has acquired an excellent reputation in the market since it was first released and has been used by both HYJLwings and Dream Air to create Asian 757s. Although hardly a major operator of the type Singapore Airlines has good coverage in 1:400 scale and already has had a Dragon Wings 757 released. The question is whether the pair of 757s HYJLwings has recently released are capable of replacing the trusty Dragon edition.

Singapore ordered 4 757s at the same time as 6 A310-200s and used the small sub-fleets to undertake an in-service head to head competition. The 757s were registered 9V-SGK-SGN and the first aircraft arrived in November 1984 making Singapore one of the earliest customers for the type. All four aircraft were equipped with Pratt & Whitney PW2037s.

The 757s saw five years of service with Singapore, which actually isn’t that short for the airline at the time, but given follow on orders it is clear that the A310 won the competition between the two. From 1987 Singapore began to take delivery of A310-324s and eventually 23 of the 3-TENs saw service. In fact, the A310s continued well into the next century with Singapore.

It seems that Singapore may have received some negative feedback from customers in regards to the single aisle of the 757 vs the A310’s twin aisle layout, however the primary issue that went against the Boeing was freight capacity. Singapore being a popular transit hub has a major freight through flow and the underfloor baggage holds of the 757 are not containerized. This meant unloading was slow and manual and incompatible with the rest of the fleet.

The quartet were all sold to ILFC in late 1989 and leased to American Trans Air until 1996/97 when they all were sold to Delta Air Lines. Despite their relatively advanced age they saw a further twenty years of service wearing the widget. The first to be retired was N757AT (formerly SGM) retired in October 2015. N750AT, the former 9V-SGL, has been stored at Blytheville, Arkansas since March 2016 and will not fly again.

The old Dragon Wings mould dates from 2002 and was actually only used 9 times since its thunder was rather stolen by the older, but superior, Gemini Jets mould dating from 2000. However, it is the Dragon which most closely compares to this HYJLwings example since Gemini never made a Singapore Airlines example. As you would hope of a 2018 mould the NG Models mould eclipses the old Dragon Wings version in every way.

The fuselage shape of the NG Models mould is excellent, particularly the nose shape and wingroot area. The latter is a really nicely contoured design with an exceptionally tight fit for the wings. The Dragon mould actually was seamless, unlike many older moulds, but the nose shape was never as accurate as it needed to be. Being such an old mould, it was also lacking aerials, which the NG version has accurately sized and shaped too.

The old Dragon models are renowned for their simple pull out nosegears – fine for their time but now looking rather old fashioned and inaccurate. The NG mould has delicately detailed gear legs and excellent tyres and hubs.

The control surfaces on the NG mould are full metal but still crafted to a fine degree. The wings and stabilisers fit tightly to the fuselage and flaps and ailerons etc are beautifully etched. Dragon Wings models had plastic wings which for the time allowed fine detailing but cannot compare to the accuracy of a 2018 product. Likewise the engines are beautifully fitted and designed.

As a mould the NG Models 757 is effectively faultless and easily beats all previous versions of one of the most attractive airliners ever built be they Dragon Wings, Gemini Jets or Phoenix model examples.

The Singapore Airlines livery is a classic that they have tastefully updated over the years without damaging the central premise or look behind it. The original version, as worn here by this model, remains classy and is a lot brighter and simpler than the later colours. The tail logo represents both a bird (crane maybe?) and the mystical kris dagger. These daggers are highly prized and often passed down generations but also considered to have a presence or to possess magical powers.

The livery colours of a bright yellow and dark blue are simple and accurately recreated on the model. The tail logo is faultlessly applied and the widening cheatline also beautifully placed. Details such as the rego on the nosegear, logos on the engines and tiny Boeing 757 lettering on the rear fuselage are all present and correct.

Importantly the engines are correctly light grey and not white (a mistake Aeroclassics made with their Singapore A310s). This may be a simple livery to reproduce but this model has hit the spot perfectly. Full marks once again.

The printing detail on this model is up to the usual high standards I have come to expect from NG Models products. It is delicate and fine nicely catering for areas that are sometimes hard to see in photos, like the nosecone and cut here in emergency panels. NG have gone the distance here especially with the panel lines on the engine nacelles and the underside of the fuselage. 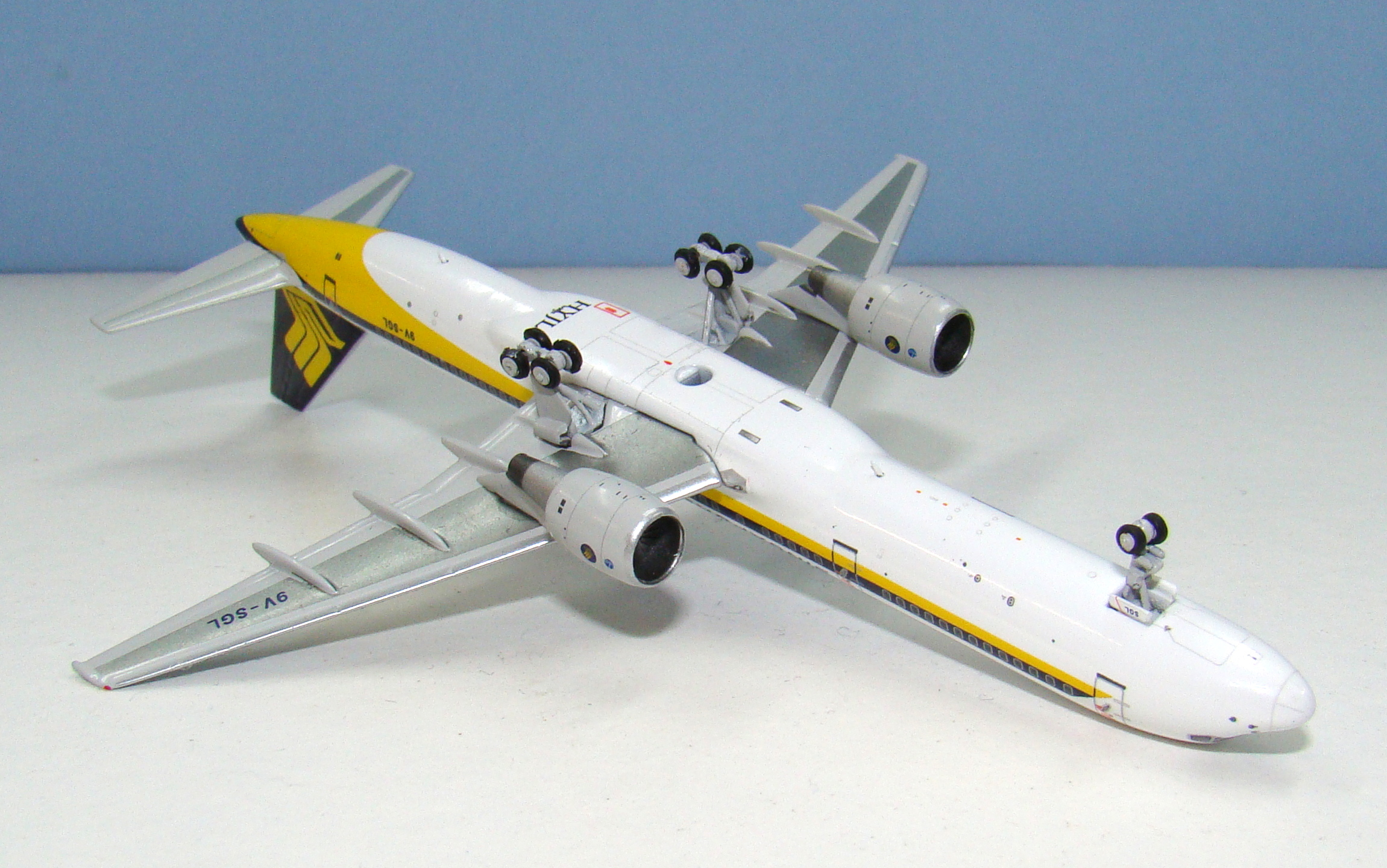 The only print discrepancy I can find is that the horizontal stabilisers join the fuselage directly onto livery striping and not the diamond grey area they ought to. It is a minor complaint. The engine rims are finished well and the fanblades inside have a nice dark colour too.

Construction of the model is faultless. The aerials are well placed and fitted, the gears roll and everything is where it ought to be.

Will a review of mine ever score full marks? This one comes about as close as any have so far. It may seem like quite a simple release but most manufacturers fail to produce a model to such high standards as this. Indeed, this is the perfet combination of a boutique manufacturer using the best materials (mould and metal box with collectors card) with an iconic livery and completion to exacting standards.