Only a small fraction of the available regional airline/aircraft combinations are represented in 1:400 scale, however that isn’t due to a dearth of excellent moulds. Indeed JC Wings has almost a monopoly on a spectacular range of little regional props and jets. Fortunately they appear willing to share and that means that other brands like Gemini Jets, Skywings and Dream Air have also been able to utilize the moulds to everyone’s benefit.

Regional aircraft types have never been a major component of the Chinese aviation scene and even today make up less than 10% of aircraft in service (compared to around 25% in the USA). Despite massive growth there are still plenty of new routes capable of supporting an A320 or 737 so that the slimmer regional routes have largely been neglected. Few airlines operate RJs at all let alone base their operations around them. Indeed until fairly recently most of the Chinese majors weren’t operating true hub systems anyway and certainly nothing on the scale of the sort of interline scheduled super-hubs as scene in the USA.

Historically most of the regional jets in China have actually been operated by the trunk airlines themselves rather than regional partners and Tianjin Airlines, which began as the regional airline Grand China Express , struggled for profitability as a regional airline and has since transitioned to a standard mainline airline with a growing fleet of A320s and A330s.

As such China Express Airlines is something of an anomaly since its fleet has consisted entirely of RJs. Operations began for the Guiyang based carrier in 2006 using 4 ex-Shandong Airlines CRJs. In fact it was the first private regional airline in China. It does seem that even China Express has been unable to ignore longer routes and has recently signed for 20 A320s, the first of which has just arrived.

Despite some issues, including a temporary grounding by the CAAC in 2010 following a CRJ wing/runway strike, the airline has grown and continues to operate an all CRJ fleet. This is however nowadays an all CRJ-900 fleet with the last CRJ-200 retired on March 29, 2015. This retirement marked the end of CRJ-200 operations in China.

The CRJ-900 itself has not sold well in China ,where the Embraer E-Jet family has been far more successful (albeit sales are still miniscule considering the market). China Express certainly doesn’t seem to mind being the only Chinese CRJ-900 operator and has grown its fleet to 31 aircraft. B-3385 was the 20th of the type to arrive and acquired markings to illustrate that achievement.

The airline has at least a further 7 CRJ-900s on order and has seemingly found an underserved niche ignored by airlines operating larger aircraft. As Wu Longjiang, the airline’s President, said in December 2015 when it ordered ten extra CRJs:

“China Express is committed to providing air services to people in Tier 3 and Tier 4 cities in China. Our mission is to improve the connectivity by air for those communities,”

It certainly seems to be delivering on that promise.

The Canadair regional jets nowadays have a rather bizarre appearance since the manufacturer (now Bombardier) has stretched the fuselage of the base CRJ-200 so dramatically. The seemingly tiny rear mounted engines just don’t seem big enough to get the aircraft off the ground and the slight nose down attitude and T-tail gives the aircraft a rather hot-rod-esque appearance. I guess it makes a pleasant variation away from the twin engine underwing styling of almost everything else being made nowadays. Certainly the CRJ-900 looks better proportioned than the even more extravagantly stretched CRJ-1000!

JC Wings range of regional aircraft are almost all very good and this CRJ-900 is no exception. The fuselage is well shaped however I do think that as this is a cradle mount mould they’d probably have benefitted from following the fuselage/wing fairing with the seam.

The cockpit and nosegear doors are well shaped and sized and undercarriage very dainty and detailed. Indeed this mould may have the smallest nosegear of any aircraft in 1:400 scale. It gives the model the correct nose-down look but I can’t help think that the tyres of both the nose and maingear are a little too small.

It is at the rear of the aircraft where everything is going on with this mould. The engines are nicely mounted and shaped, whilst the complex tail shape of the CRJ is really well done here. The tailcone is well shaped and pointed and the ventral strakes under the engines on the rear fuselage are looking good.

It’s hard to make such small moulds at all in this scale but this is a great version. It certainly knocks the stuffing out of the older smaller CRJ-200 mould.

China Express has a simple euro-white style livery, although the recently delivered A320 wears a modified scheme it is still primarily white on the fuselage. The airline’s main logo is a stylized dove in flight within a mainly blue tail with some light blue highlighting. The dove features again on the forward fuselage but this time in blue. The CRJ-900 is such an odd shape with a thin fuselage and small tail that it is hard to reproduce a lot on it but the China Express scheme does the job I guess. It’d be nice to have a bit more fuselage and/or belly colour however.

The livery colours are reproduced well on the model but the same can’t be universally said of the placement of the livery itself. It’s not a million miles out but the arcing blue line on the tail should be higher. This makes the already small dove logo even smaller than it ought to be. Interestingly the opposite issue is present on the engines where the blue parts are too high and the band starts too high up the nacelle rim.

The dove logo on the fuselage and the airline titles are fine, whilst the 20th CRJ logo just behind the cockpit windows is present. The actual aircraft no longer wears this special scheme addition but it was still present in June 2017. 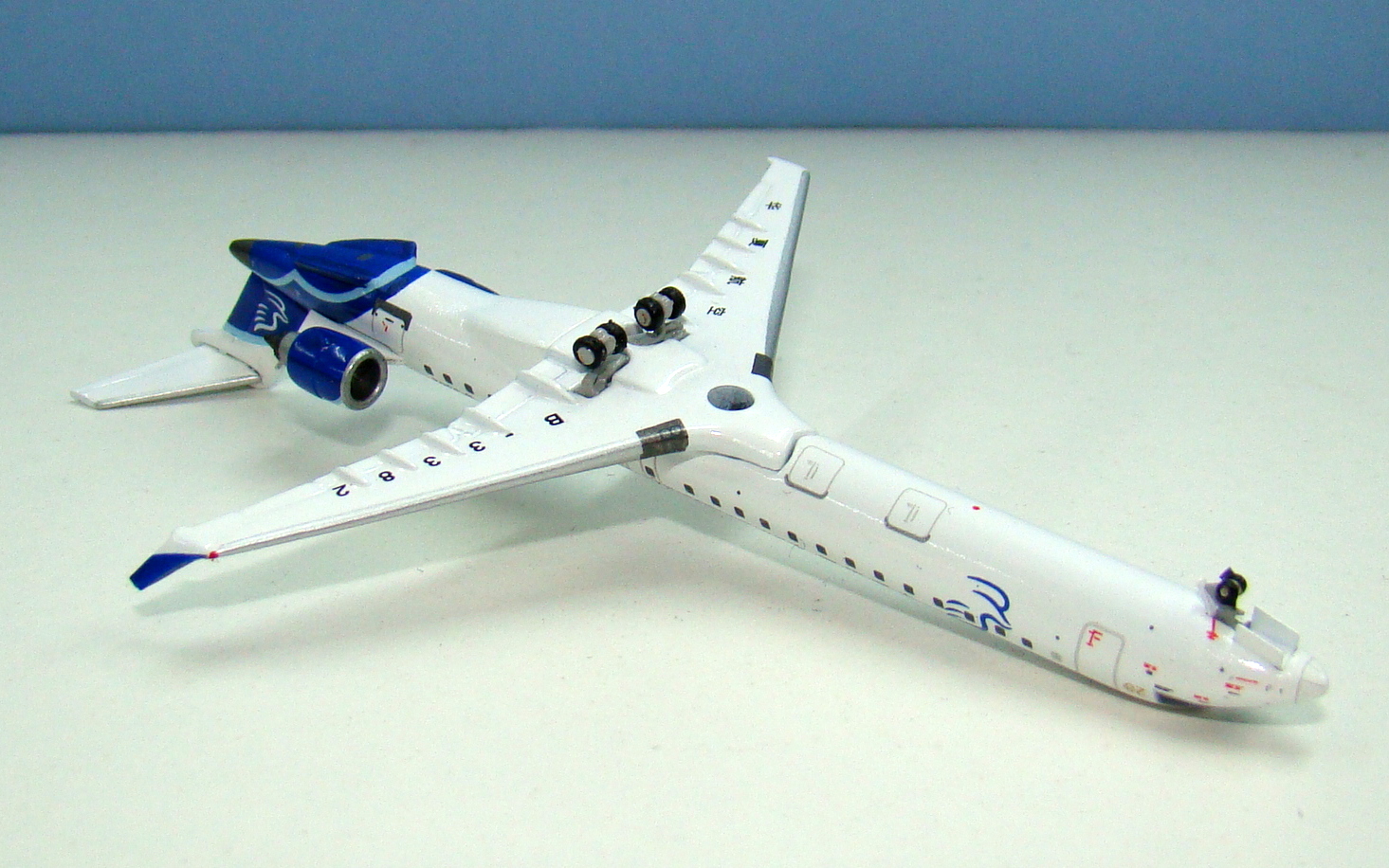 As this comes from the JC Wings stable I would expect great printing and it is present. Especially around the nosecone and forward gear there is plenty to see. The wingtops are another area very well presented with escape pathways, registration characters and little red arrow marks.

The model is essentially well put together and you have to use a microscope to see the tyre tab on the nosegear, it is that small. From the front however it becomes clear that the engines are not mounted at the same height. There are a couple of areas of scuffing on the model, although both are quite hard to see with the naked eye. On top of the engine nacelles there are two points of roughness and on the lower port side near the nosegear here is another (possibly glue)? It’s hard to put such small models together so I’m not going to be overly critical here especially as marks are not very obvious.

I had been hoping that this model would be made but it has only been since Skywings have acquired access to the JC Wings mould catalogue that it was at all likely. This is a great little model and none of the points deductions have a major impact on my opinion of it. It probably helps that it is so small as on a larger model these errors would be accentuated. Nonetheless this model is another strong entry and in addition comes with a nice little card telling me where it sits in the production run.

With 2019 coming to a close, questions are being asked about the future of large airliners even when they are twinjets. Both the 747-8 and A380 are effectively dead, while orders for the Boeing 777-9 […]

Last month the moment so many of us had been waiting for finally arrived, as the first NG Models Tristars hit the stores. It goes without saying that I have not been overly impressed with […]