HYJLwings has produced multiple variants of the A321 in 1:400 scale including the A321ceo with and without Sharklets and with both engine options, plus of course the A321neo also with both engine options. Their latest A321 represents the newest and greatest variant the A321LR, which looks like it will take the middle of the market segment by storm. The HYJLwing’s A321s themselves deserve to take 1:400 by storm as they are excellent and in this review I take a look at the A321LR. 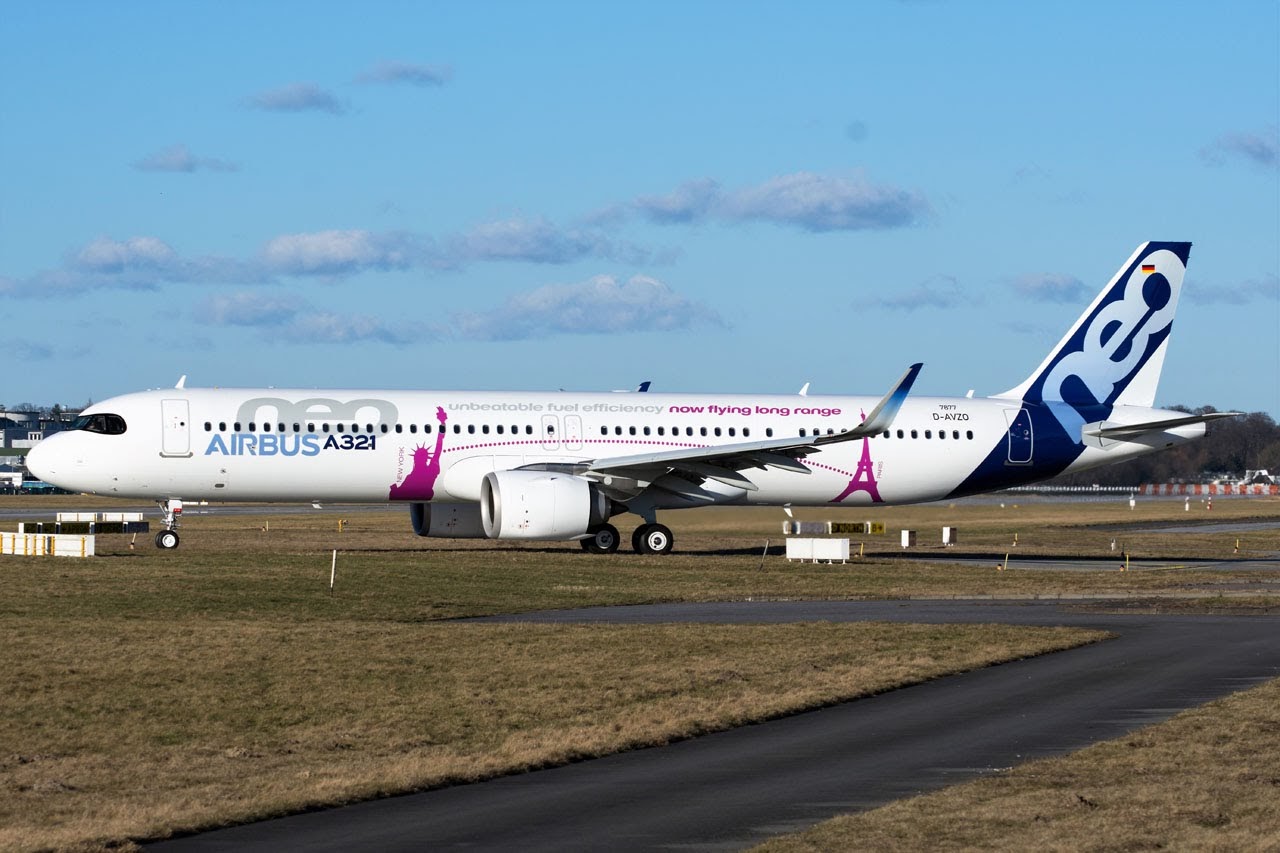 The A321 began its life as merely a stretched A320, albeit with double slotted flaps, and as such has increasingly gained orders as the market has generally moved towards higher capacity planes and away from smaller types like the A319. Nonetheless despite being a viable replacement for the classic middle of the market narrowbody, the Boeing 757, in medium range markets like UK to the Mediterranean it has struggled to compete effectively on longer routes that the 757 has in the last twenty years made its own – like US Transcon flights and low density transatlantic services.

The logical creation of the A321neo has however moved the goalposts and as with the A330, which has been incrementally improved to become a major force, the A321 looks like it too will gain a larger share of the market in its more mature years with the creation of the A321NX, or as it is typically known the A321LR.

The A321LR has an increased maxium take-off weight and an additional centre fuel tank allowing trips of around 4,000 nm (7,400 km). A new door configuration also allows the type to seat up to 240 passengers and provides the only external way of distinguishing the type from a standard A321N – although the prototype has also been painted with Airbuses increasingly familiar bandit mask.

The prototype LR msn 7877, registered as D-AVZO and powered by CFM LEAP-1A engines, took its first flight on January 31, 2018. The type has been easily proving its capabilities during testing and on March 30th completed an 11 hour flight between Mahe in the Seychelles and Toulouse. The A321LR looks to have provided Airbus with a major performer in the middle of the market segment, where Boeing is currently mulling a prospective 797, as its 737 MAX-10 has underperformed.

Orders for the A321N have been superb (with over 1,700 on order compared to only just over 500 737 MAX-9s and 10s) although it is difficult to break out orders for LRs from the standard NEO offering. Certainly Norwegian will be an early operator with 30 on order whilst Qantas has ordered 18 LRs for Jetstar. Other orders include Aer Lingus, for 7, and Air Transat, for 10. Initial deliveries should begin in the last quarter of 2018 but for now D-AVZO continues to work towards the type’s certification.

In the majority of characteristics this mould is the same as that used for the Dragonair A321 I reviewed a fortnight ago, however this being a neo and that being a non-Sharklet ceo there are important differences. Anyway the fuselage is effectively the same meaning it is near perfection. There are no issues with the shape or detailing of any of the fuselage or stabilizer components.

Another major strongpoint of this mould is the undercarriage. This is such a negative point on the JC Wings mould and one of the less good aspects of the Aeroclassics. Here the tyres are excellent, both in size and detail, whilst the slightly forward angle of the gearleg and size of the gear doors are accurate. The maingear also has proper tyres with wheelhubs.

The big difference between this and the ceo are the wings and engines. Neither Phoenix or Aeroclassics have ever produced an accurate Sharklet equipped A321 wing, instead choosing to reuse their A320 wing inaccurately. HYJLwings do not make this blunder. The double-slotted flaps and extra flap track fairings are present and excellently reproduced.

The large CFM LEAP-X1A32 engines are well hung on their pylons and achieve a remarkable accuracy with the real thing. There are no ground height clearance issues and from the front you can see the fanblades are really well detailed. They may not spin like the new Phoenix neos but the engines as a whole look better.

All four of the larger aerials are reproduced, well placed and sized, with only the very small forwad underside one absent. The combination of features, good tyrehubs, correct wing, great shape and aerials, make this is the best sharklet equipped A321 by some distance in 1:400 scale.

The good thing about Airbuses rather spartan house colours is that they provide plenty of real estate for special schemes, which on the A321LR they have used to their advantage to advertise the type’s transatlantic capabilities. On either side the Eiffel Tower connects with the Statue of Liberty illustrating the Paris to New York range of the LR. In association with the bandit mask I like it a lot.

HYJLwing’s reproduction of this livery is a work of art. The shade of blue for the neo on the tail may be a little dark but its placement and the tiny German flag are accurate. The location of the landmarks, connected by dots, is perfect as are the combined neo A321 AIRBUS titles forward. On the minus side the landmarks do appear a little too red and not pink enough.

The bandit mask is nicely applied around the excellent cockpit windows and on the belly the huge A321LR titles are present. The only missing element of the scheme is the very thin pink strip that goes around the wing/fuselage join fairing. 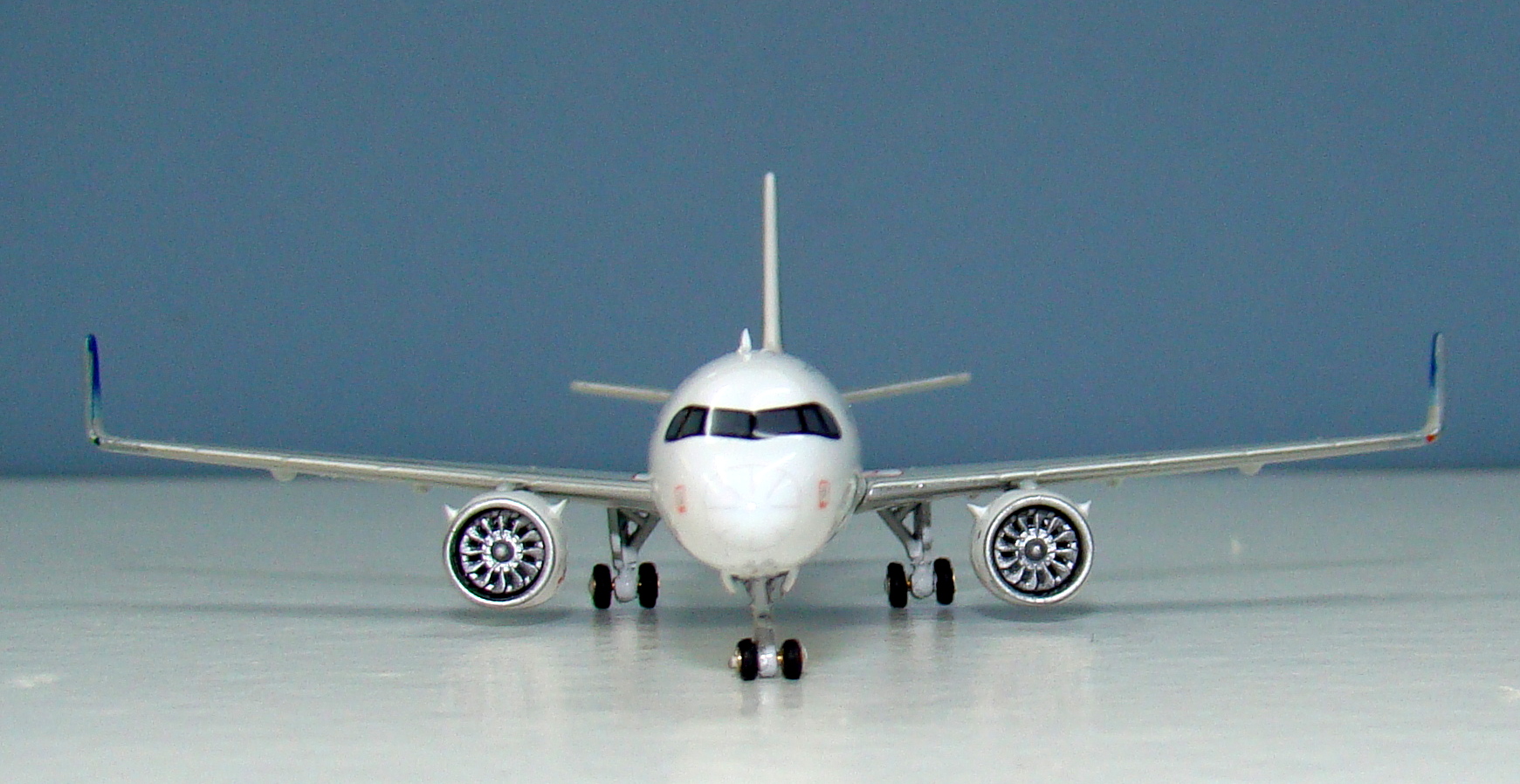 Print quality on the model is fantastic with perhaps the finest nosecone line printing I have seen in this scale. Detailing around the cargo doors and underbody central wing box is almost too detailed but always very well done. Countershading on the wingtops is also detailed and follows the panel lines whilst the gradation of paint on the wingtips is a high quality finish. The only real way to distinguish the A321NX from a standard A321neo is of course the door configuration and as you’d expect there are no mistakes on the model, with the extra door aft of the wing. 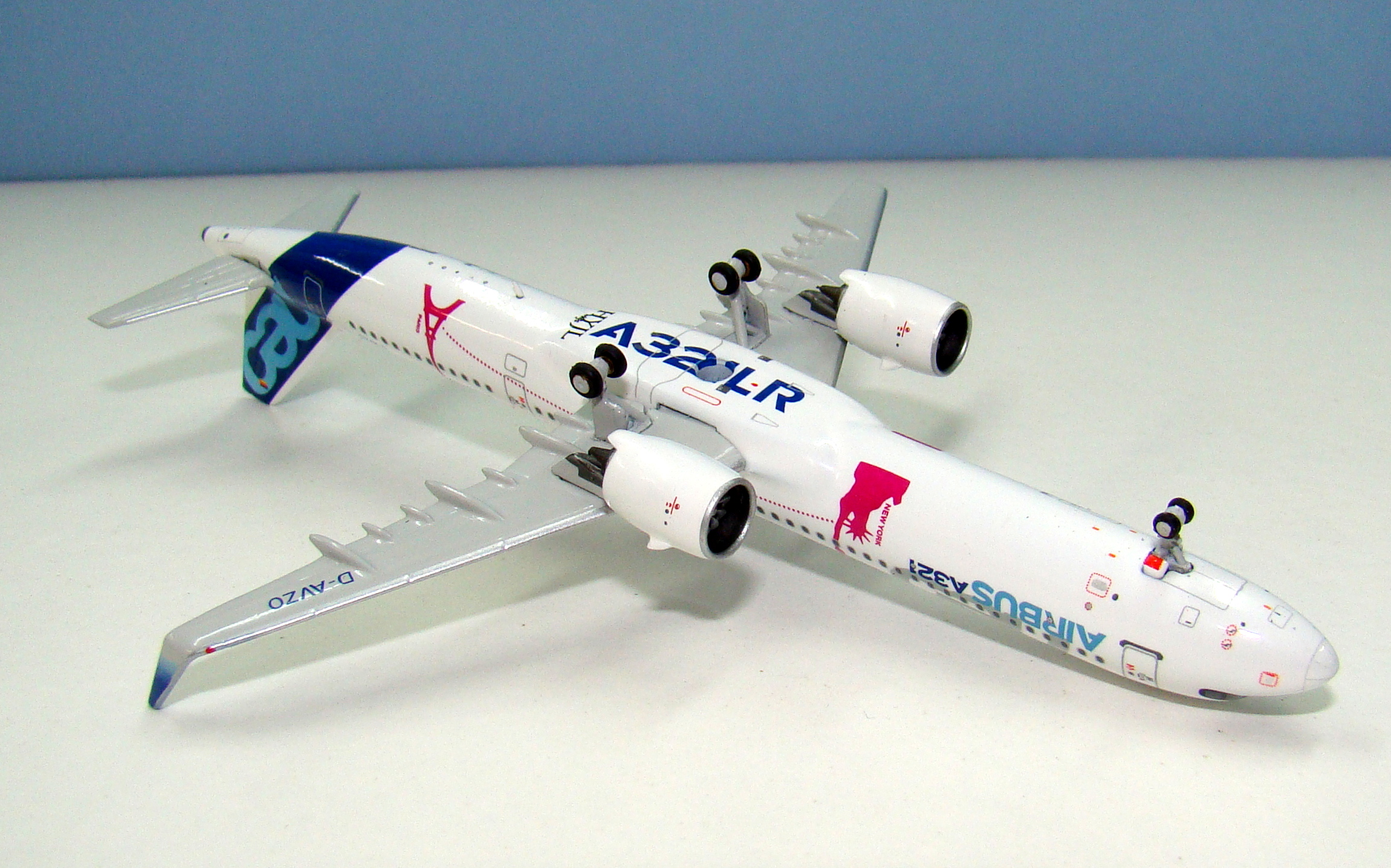 Additionally as you would hope with a model of which only 120 pieces were made the QC is perfect. All this and of course it comes with the standard HYJLwings wooden box, apron sheet, handling glove and collectors card.

This is one of the few A321s HYJLwings have made that has not been produced by anyone else, although when they’re producing such high quality models they are easily beating the competition. It is a near perfect model and a great representation of what will become an important type in the near future. Unfortunately if you don’t own it already you’ll struggle to find one as I had to go through four taobao retailers before I could secure my own copy. Surely HYJLwings could produce three times as many of this scheme and still sell them all?

Next Week at The Diecast Flier

As we wrap up another week of reviews and model news, checkout some of the exciting articles The Diecast Flier has in store for the week of June 12th! Phoenix Models Aeromexico 777-300ER “CDMX” 1:400 […]

The DC-9 arrived just as many of the US local service airlines were looking for their first pure jets but in the absence of a working DC-9-10 mould we in 1:400 are only able to […]