As much as I appreciate the capabilities of the modern big twins it is disappointing, from an enthusiast’s perspective, to see that both the A380 and 747-8 VLAs have not been appreciated by the market in the way Airbus and Boeing both no doubt hoped. At least in 1:400 scale both types have proven to be big sellers and both have attracted the attention of model makers of larger types i.e. Phoenix and JC Wings / Gemini Jets. Nearly 80 747-8s have been made in 1:400 scale, which is nearly double the number of passenger variants built. The latest example is from JC Wings.

Creating a follow-on 747 to the 747-400 has proven to be a difficult and extended activity for Boeing. During the 90s there were various 747 stretch paper airplane variants that never got further than the drawing board. The success of the Boeing 777 and its extension into the world-beating 777-300ER was always going to impact the future of the 747, but even so Boeing felt confident enough to launch its 747-8 programme in November 2005.

Airlines had been interested in adding upgraded technology to the 747-400 design for a while and the new 747-8 adopted raked wingtips and the sawtooth engine nacelles that were becoming de-rigeur for large Boeing aircraft. With the 777-300ER effectively filling the space as a direct replacement for older 747s the new 747-8 was stretched, to fill the niche between the largest 777 and the A380, and given an all new wing.

It was obvious even early on that 747-8 sales would be weighted heavily towards the cargo variant, although Boeing optimistically forecast sales of 300 units split evenly 50:50. Certainly what became the passenger variant, the 747-8I ‘Intercontinental’, has proven a tough sell for Boeing. Airlines have preferred smaller more efficient twinjets, that have comparable range but offer greater flexibility and frequency, rather than the capacity of the 747. At the other end of the spectrum, where airport capacity constraints are a factor, airlines have tended to prefer the A380, although of course Emirates unique business model has been heavily dependent on the A380 also.

By February 2009 only Lufthansa had ordered the 747-8I and at the time of writing it seems no more passenger 747-8s will be constructed for airline service. The global fleet stands at 47 units of which only 36 are in airline service, with Air China, Korean Air and Lufthansa. The remainder are ludicrous luxury business jets or will serve as the future ‘Air Force One’. Other airline orders for carriers like Arik Air and Transaero, unsurprisingly, did not come to pass.

Fortunately for Boeing the freighter variant has sold 107 frames, but this still represents a total of less than 50% the sales objective. If there is a silver lining to be found it is that at least Boeing could limit its investment by keeping heavy commonality with older 747 variants. Plus, even though the passenger version is something of a dud Boeing has a stranglehold on the large freighter market, with both the 777F and 747-8F.

The prototype 747-8I, N6067E, took to the skies on March 20, 2011. Its career post flight-testing has not been with Boeing and instead it was sold to the Kuwait Air Force, no doubt outfitted luxuriously. It joined its new customer on March 11, 2012 over two months before Lufthansa’s first aircraft entered service. Despite being a somewhat questionable investment the 747-8I remains an extremely attractive aircraft and a welcome diversion from the sea of lookalike twins that inhabit today’s airports.

The 38 747-8Is built in 1:400 scale come from a surprising four different moulds made by Dragon Wings, Hogan, JC Wings/Gemini and Phoenix. Dragon has made only one, while Hogan has managed five but none of these six releases represent airline examples. It is therefore between JC Wings / Gemini and Phoenix where the real competition lives. When it comes to the freighter version of the 747-8 the JC Wings mould has faced criticism of the shape of the shortened upper deck hump but no such problems have been levelled at the passenger casting.

This is yet another of JC Wings top quality recent moulds that gives me confidence that the 747-400 they have under development will also be excellent when it eventually arrives. The overall shape of the fuselage is beautifully accurate, especially at the nose. Held up against an image of the same aircraft the model aligns well with the shape of the real thing. 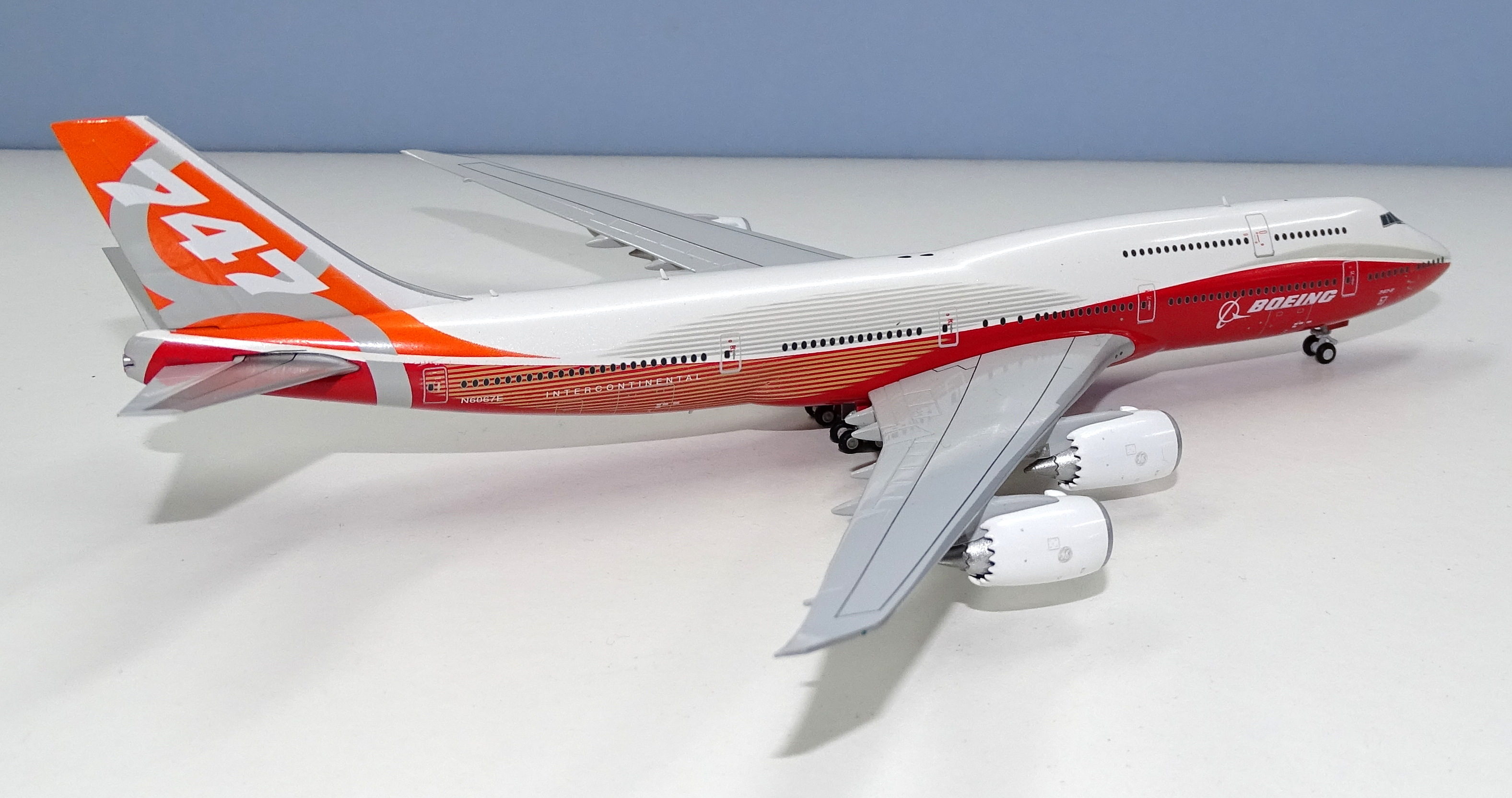 The wings slot in to the fuselage tightly with no gap and are held at the correct angle for an aircraft that is on the ground. The engines and engine pylons are well shaped and hang at a good height beneath the wing. The fanblade detailing is nice although these are solid fan engines and not the more modern see through kind.

The undercarriage is very nicely detailed and the maingear bogies all move independently. It is possible the nosegear leg is very slightly too short but if it is it is by probably less than a mm. There are four aerials present and all are well shaped but the upper larger pair are perhaps slightly too large. Neither of the small humps ahead of the latter pair of aerials are moulded in. The tail and rear fuselage are accurate and the detailing of the APU exhaust is very nice.

This is a top class moulding. All my criticisms are light and inconsequential as to the overall quality of the piece, however taken as a whole I’ll dock a point for them. The addition of see through engine fanblades would be an improvement.

This model represents the 7th version of the prototype in the ‘sunrise’ variant of the Boeing house colours. Previously it has been made by Dragon Wings, Phoenix and Hogan – the latter two creating versions featuring both inflight and on ground wings. Even JC Wings has already made this model before (in 2015). The scheme uses three main colours: red, orange and light grey. I think JC Wings has the shades of each well covered.

Areas of detail, such as the fact that the titles and registration on the rear fuselage are not actually horizontal to the windowline, are accurately depicted. Airline customer tails just aft of the entry door on the upper hump port side and the number 57 forward are present and correct.

The only area of criticism I have for the livery is that the white line between the red and orange by the horizontal stabilisers is not thick enough and also not the same thickness along its entire margin.

JC Wings has printing capabilities that mean they can reproduce things like nosecones without much trouble. Printing is good everywhere (the subtle GE logos on the engine nacelles are a highlight) except on the leading edge of the tail orange margin. Beneath where the number 8 hits the orange edge the line is a little wavy. This may be on purpose to try and illustrate the diffuse nature of the line but in this one area I think it doesn’t work as well.

The paint used on this model is very impressive and the upper surfaces show a pearlescent micaceous glint in direct sunlight.

The model is well built in every respect, although my example did come with one of the maingear trucks detached. It was easily fixed back on and there is no evidence it was ever detached. I have also noticed that the stand hole on this model is smaller than on other 1:400 models, which makes it harder to display on the standard generic Witty/AV400 style stands I use.

This is a superb model that is actually much better than I thought it was going to be when I ordered it. It is a real shame there aren’t more 747-8 operators as JC Wings have a great mould and once again show that their emergence as a 1:400 manufacturer of high quality continues.

The Airbus A330 has built up a commanding order backlog amongst the Chinese airlines and its flexibility meant that by 2016 Boeing’s share of the intercontinental Chinese traffic was down to only 30%. Fortunately for […]