Mould sharing has been a common theme throughout the history of 1:400 scale and when the casting is a good one it is a win-win for everyone. In some cases, where two brands models are made in the same factory (or at least facilities owned by the same company), many moulds can be shared; JC Wings and Gemini Jets is the most obvious current example of this. More usually it is only one or two moulds that get the sharing treatment. Aeroclassics hadn’t shared a mould since the ill-fated pairing with the creators of the 737 series moulds, which would go on to form the basis of Panda Models first production, whereas NG Models have shown a willingness to share their moulds, including their 757, with various brands. Can Aeroclassics do the casting justice?

The 1978 deregulation of the airline industry didn’t only open the floodgates for new competitor airlines, it also gave supplemental airlines their first real opportunity to grab mainstream marketshare since their birth in the postwar period as non-skeds. A few of the supplementals, like Capitol and Transamerica, really went for it, but as the 1980s progressed they found it hard and the majority folded. An even smaller sub-category of the US supplementals was that of travel clubs, and from this obscure grouping came what would become the most successful of the pre-deregulation charter airlines – American Trans Air.

Travel clubs were one portion of a larger con, designed to enable charter airlines to skirt some of the regulated rules on route allocation and pricing. By only flying members of special established groups the, determined and innovative, charter airlines, from both sides of the Atlantic, could take advantage of an obscure rule that had been made by IATA. This was largely a nonsense and the concept of membership became so fluid that the whole thing was little more than a clever loophole. Many major secondary airlines operated these affinity charters but some real clubs were formed that actually started their own airlines expressly to carry their members. One of these was Ambassadair, which was formed in February 1973 with a single Boeing 720.

The majority of travel club airlines were small, underfinanced and didn’t survive long, but Ambassadair acquired a second 720 in 1978 and, renamed as American Trans Air (ATA), acquired its common-air carrier certificate in 1981. Unshackled by deregulation ATA was free to compete in the charter market and successfully expanded through the 1980s with first 707s, then DC-10s, 727s and L-1011 Tristars. In 1986 the carrier began its first scheduled route and, as well as holiday charters and select scheduled routes, also became a major contractor to the US military.

In 1989 ATA was able to take a major step in modernizing its fleet when it acquired all four 1984 build ex-Singapore Airlines 757-212s on lease from ILFC. The first to arrive was the former 9V-SGM, which became N757AT in November 1989. The 757s proved excellent for ATA’s purposes, which increasingly involved a growing leisure oriented scheduled market. Despite its success ATA actually only operated the four series 212s until late 1996, but they were replaced with further 757s.

ATA would go on to try and turn itself into a true US major with a hub built around Chicago’s Midway airport. Unfortunately, despite a new fleet of 737-800s and 757-300s, to supplement the 757-200s and remaining L-1011s, the strategy was not a success. Forced into chapter 11 bankruptcy protection, in October 2004, the airline downsized drastically and limped on until its final collapse in April 2008.

All four of the 757-212s, that had been returned to ILFC at the end of 1996, quickly found new homes with Delta Air Lines. Unusually they kept their registrations and all out-lived ATA itself. This aircraft was stored finally in October 2015 and scrapped soon afterwards, along with her three sisters.

Aeroclassics had been suggesting they were looking into making a 757 for some time, but when, in January 2018, the NG mould came on to the market they wisely pivoted elsewhere and instead paired with NG to use their new 757. They acquired 3,000 units of the mould and had, as of July 2019, made 12 757s. It had seemed that they had used up all their castings as the last 757 was made in the first few months of the year and 3,000 / 12 was only 250 units a release. However, given 5 of the releases have been EL AL variants it is not surprising that the runs were probably a lot smaller than 250 units. This is obviously the case as August 2019 brought 4 more Aeroclassics 757s including this one. They can’t have many more blank castings left.

I now own 63 757-200s using this mould, including 6 of the Aeroclassics versions, and along with almost every other collector I know, consider it one of the finest castings in 1:400 history. Having said that Aeroclassics immediately diminish its greatness a little by producing versions that do not have any aerials on them. Everyone knows the head of Aeroclassics has a strong aversion to aerials in this scale but removing the excellent NG aerials from the 757 is a backwards step. It isn’t the end of the universe but the mould is better with them and loses a point without them.

The fuselage shape of the NG Models mould is excellent across the board, particularly the attractive nose shape and wingroot area. The latter is a really nicely contoured design with an exceptionally tight fit for the wings. The biggest weakpoint of the old Gemini 757s has been the landing gear and, although this has recently been updated to compete more evenly against the NG mould, it is still inferior to the delicate and finely detailed nosegear leg of the NG. It’s not just the leg either – the tyre is lovely and the gear doors accurately sized.

This attention to detail transfers over to the maingear legs and doors also. The control surfaces on the NG mould are crafted to a fine degree. The wings and stabilisers fit tightly to the fuselage and flaps and ailerons are beautifully etched.

This version of the mould carries the Pratt & Whitney PW2037 engines and they look excellent. As I have said many times before this mould is perfect for me aside, in this case, for the absence of the aerials. 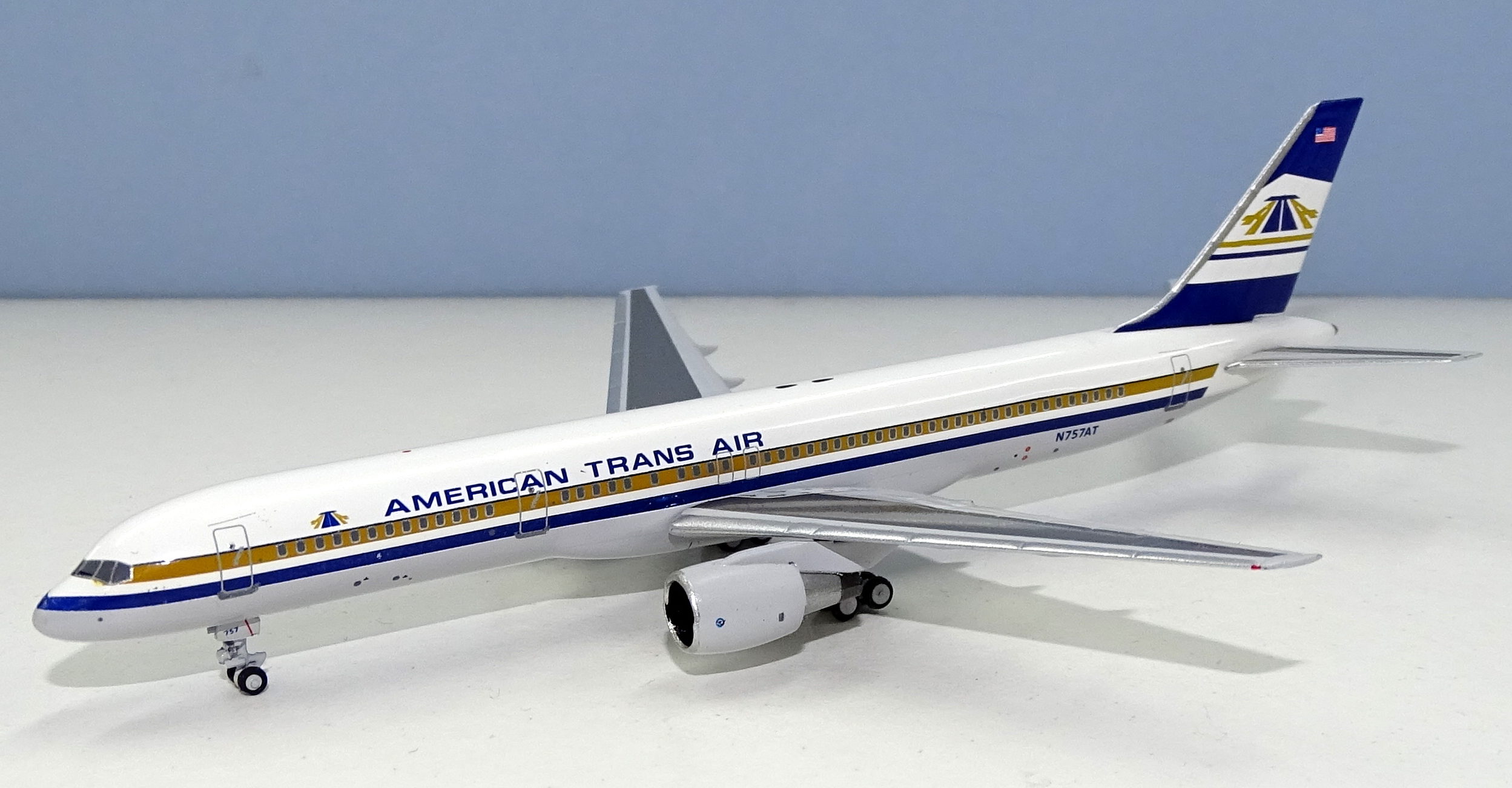 ATA began the 1980s with a classy rather retro feeling gold and purple scheme that featured a clever runway logo for the ATA. This was dropped in the early 90s for a more tourist friendly livery but the earliest 757s got to wear the original and so does this model. This was one of the last models I reviewed for Aeroclassics before the recent falling out (over my criticism of their Tristars). That should hopefully mean it isn’t bad, although I did make a few errors now and then, and it seems I was the only one checking the models at all!

The colours of the gold and purple are excellent and the grey belly is correct (the original artwork had a white belly). The tail design is good. It may be a tiny bit crooked but it is nowhere near as bad as the America West example from this month and barely noticeable in this instance.

The finished model actually matches the artwork except in two areas, neither of which relate to the design. Unlike the artwork the cheatline on both sides is a fraction too low and meets the cockpit window line at its lowest top corner rather than at the point of the corner of the middle and outer windows. Also you can see there is too much white below the cockpit. The result isn’t disastrous, but the entire cheatline is slightly too low along its length and it is noticeable.

On the port side of the nosegear door the 757 is printed at an angle when it should be straight. 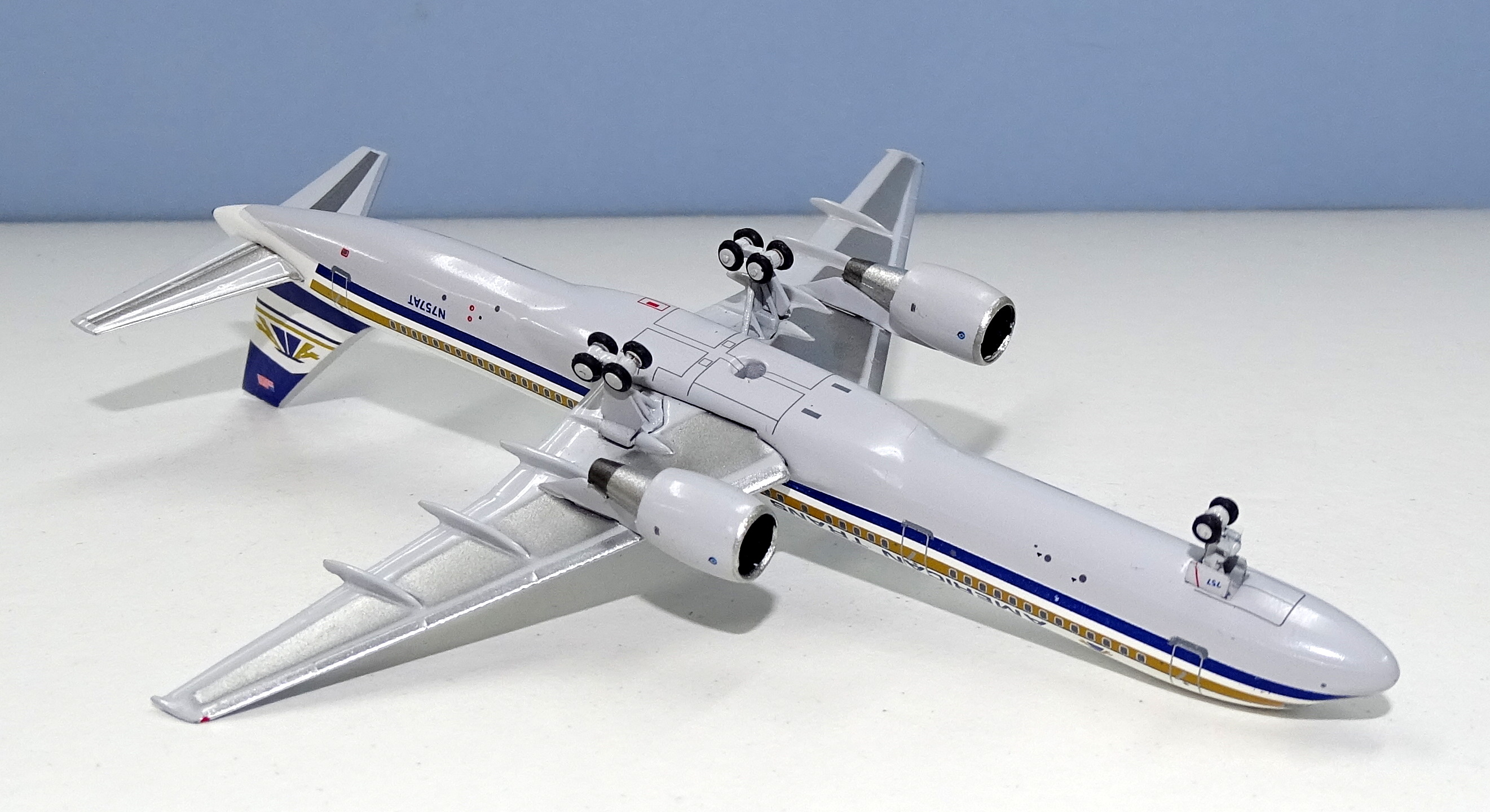 The 757s produced by Aeroclassics to date have been a mixed bag, too often due to a lack of quality in printing and build. Comparing an Aeroclassics 757 to an NG version is not usually a flattering thing to do for the former (and there have been now 6 times when both manufacturers have made the same livery). Aeroclassics struggle to compete in areas of fine printing such as nosecones, cockpits and engines but on this model what they have printed they have done well. They have fixed previous template issues (like having a window between the emergency overwing exits) and improved the cockpit printing since their last batch also.

One area of printing does raise quality control concerns and that is the upper surface of the starboard side horizontal stabilizer. Compared to the port side the printing of the silver is speckly and has a poorly defined rear margin.

Build quality of the actual mould is excellent and presents no issues. Overall this is a decent effort and I’m happy for Aeroclassics to avoid printing areas, like nosecones, that they have struggled to get right when they have tried them before.

This is a good model and one I probably won’t replace with an NG version if they ever make it (whereas I have replaced the USAir example and preferentially bought the NG Delta, EL AL and Eastern examples). The score for this model is respectable, but I did actively avoid all three of the other Aeroclassics 757s from August, which all would have scored worse due to printing issues. Overall, I am glad that Aeroclassics have been using the NG Models 757, but I would be lying if I said that they matched the NG versions as a finished product. That probably isn’t a major surprise to you and certainly isn’t an indictment of what is still a nice release that is worth acquiring.

Herpa are a major player in 1/500 scale but not much more than an oddity in 1/400. They release a tiny number of models each year but at least make some interesting subjects. Slowly Bombardier’s […]