The Boeing 757 is one of my favourite airliners having, in my opinion, grace, beauty, excellent proportions but also the look of power too. Not that many 757s get released in 1/400 anymore and those that do predominantly have used the Gemini 757 moulds rather than the excellent Herpa 757. There has been a bit of a run on CAAC models of recent and here is my second review of a recent release showcasing the old Chinese flag carrier.

China during the 1980s was beginning to open up to Western influence especially in the field of aviation. In 1985 it was announced that the all encompassing Civil Aviation Administration of China (CAAC) would be split up. It would continue to exist as an administrative body, but no longer have control over direct airline operations. Its airline component was split into multiple separate carriers based upon the existing administrative regions.

At the same time China was taking delivery of a variety of new airliners sampling the majority of the world’s manufacturers from Shorts to Boeing. By modern standards the orders were small but nonetheless CAAC introduced BAE-146s, Shorts 360s, Lockheed Hercules, McDonnell Douglas MD-80s, Airbus A310s, Boeing 737-200/300s, Boeing 757s, Boeing 767-200s and Tupolev Tu-154s in its own colours prior to its dismemberment. The Boeing 757 had actually been having a hard time selling in the Asia Pacific market, with Singapore Airlines decision to go with the Airbus A310, following an operational comparison across several years, hardly a glowing endorsement. Nonetheless the 757 was a capable aircraft and CAAC was looking for replacements for its fleet of Boeing 707s.

One area of concern for the Chinese was operations into Tibet. The authorities insisted that only aircraft with three or more engines could fly into Lhasa due to difficulties in performance encountered at the high altitude; this also rather conveniently limited flights to CAAC’s 707s. As part of convincing the Chinese to buy the Boeing they flew a 757 into Lhasa for a demonstration. The American ambassador to China was onboard the flight and the Chinese insisted he remain onboard whilst the aircraft was put through its paces flying single engine landing and take-off tests before they would place an order! There was nothing to worry about as the Boeing proved more than capable of performing as needed.

The first Boeing 757 arrived in China on September 22, 1987 as a series 21B. By this point she was probably technically with the new Guangzhou based China Southern Airlines but the initial 757s all still wore old CAAC colours. By the end of 1990 13 757s were in service registered B-2801-2812 and 2815. The majority of these were assigned to China Southern with three at Shanghai Airlines and a single frame at China Southwest.

One 757 was destroyed in service on October 2, 1990 when the nearly new B-2812 (the only China Southwest example) was struck whilst waiting for take-off by an out of control Xiamen Airlines 737. The 737 had been hijacked and the lone hijacker grabbed the controls when the aircraft was forced to land due to lack of fuel at Guangzhou. Landing too fast it sideswiped a China Southwest 707 and then hit the 757 just aft of the wing. 128 people died in the disaster including 46 of the 110 passengers on the 757.

Fortunately this didn’t stop the 757 from gaining further orders in China and eventually a total of 59 aircraft would be purchased by Chinese airlines including Air China, China Southern, China Southwest, China Xinjiang, Shanghai Airlines and Xiamen Airlines. B-2803 was delivered on November 7, 1987 and flew with China Southern until 2007. She was sold to Jet2, along with B-2801 and B-2802, and now serves as G-LSAI with the British charter airline.

The old Gemini Jets Boeing 757-200, here being used by their partner JC Wings, dates all the way back to 2000 however it has gone through multiple revisions mainly around the location of the seams. Phoenix have also used the mould and updated their version of it in 2013 with an abominable set of rolling gears that effectively ruined the mould. For in depth detail of the 757s in 1/400 see my detailed 757-200 mould review.

Despite its age I still rather like this 757 mould. The cockpit and nose shape are spot on, which is by far the most characteristic aspect of a 757. The fuselage, wings, vertical stabiliser and tailcone are also great. The engines on this example represent the Rolls-Royce RB211-535E4 and look great also.

Of course the well known elephant in the room with this mould, and its Achilles heel, is the nosegear. I can understand why Phoenix felt they needed to modify it, it’s just a shame they made such an almighty hash of that change. Gemini and JC Wings have stuck with the original gear, none of which incidentally roll. I don’t care about that, however the chunky gear leg and oversized nosegear doors are less welcome.

The mould has a cradle mount, due to its age, however the wing seam join is very discrete and not an issue. The mould has also been updated with aerials of which the aircraft only ever had two. One is on the roof ahead of the wings and the second on the belly at about the same fuselage position. Both are present on this model and well sized.

Despite the nosegear I have no other major complaints about this mould, it’s just a shame it doesn’t get used more often.

Almost any livery looks good on a Boeing 757 (the old MyTravel scheme might be the exception though) and the old fashioned but classic lines of the CAAC scheme looks good. The few photos I have found of this aircraft in the CAAC scheme all show her looking rather dirty so perhaps this release isn’t that realistic as it is immaculate, but I can hardly fault JC Wings for that!

As with the other Gemini / JC Wings CAAC releases the shade of blue for the twin cheatlines is lighter than the photos suggest and also lighter than Aeroclassics and Witty use. The gold stars on the tail flag always look a bit dim to me but again in the photos they can often be hard to see against the red too so that again looks accurate.

Unlike with the 747SP JC Wings have thankfully remembered the CAAC anti-glare ahead of the cockpit, plus the small black nosecone. The winged CAAC logo, Chinese language titles and Boeing 757 rear titles are all present and correct too. The tail flag is large and well placed as is the aircraft registration below it on the tail.

In fact I can’t fault this livery application aside from the blue shade. The grey belly is good and the engines even have the little Rolls Royce logo on them.

I love the detailed modern printing that is possible nowadays. It certainly can make a model look a lot more realistic. All the detail you could want is here from the fine lines of the nose radome to the panelling on the engines to the nice outlined wingtop markings. There is no smudging or fingerprints and best of all the engine fans are a nice dark titanium rather than the bright silver of the nacelle rims. 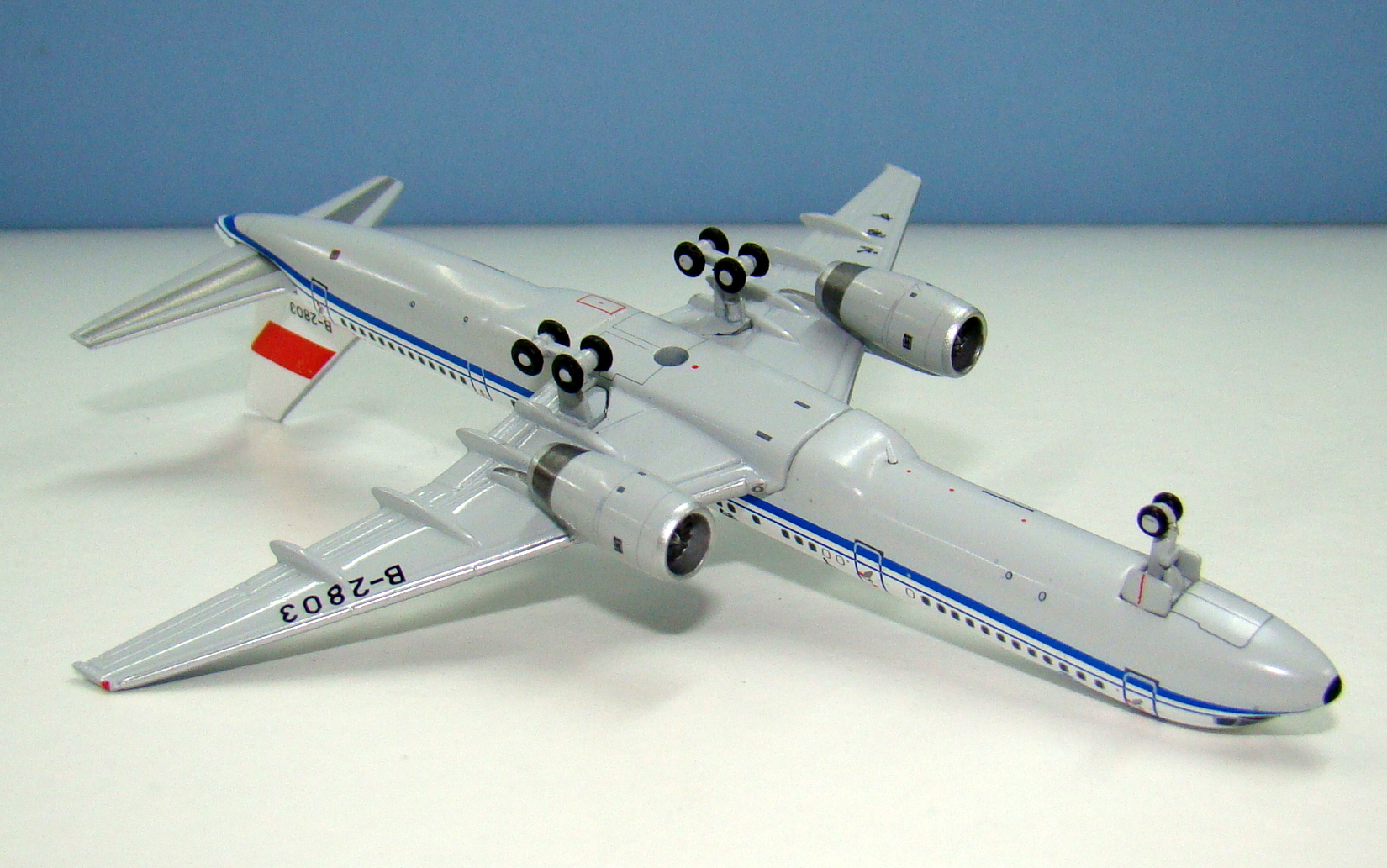 This is a solid old reliable mould that fits together well and despite the aerials feels like it is rather retro. That is a good thing as there is no trouble with rolling gears, which seem to cause dropped points on almost every model I review. Construction quality is topnotch and I have no complaints.

A great model designed and built very well indeed. She provides an interesting counterpoint to my pair of CAAC A310s and is a great historic Chinese airliner that makes me want to go and build a Hong Kong Kai Tak layout! This is a model that is well worth hunting down if for no other reason than to place it alongside your CAAC 747SP and Hercules. The latter will be the subject of an upcoming review.