Inflight’s foray into 1:400 scale via the brand Aviation400 has been picking up steam for a while now but seemingly has been delayed by production backlogs in their 1:200 line. They debuted an A350 late last year and the photos of it were extremely promising, however it has taken until now for more than just China Airlines releases to trickle out. Finally I get to have a look at one in the real and since all three of the A350-900s I’ve reviewed so far (1 Gemini and 2 Phoenix) have only scored 21 each the competition isn’t seemingly too strong.

Despite the delays and setbacks the 787 programme has suffered it did seemingly cause major disjoint to the production schedules at its biggest rival Airbus. The A330 had been selling well against the 767 for several years but the advent of the 787 stirred Airbus into action. Initially that action was mainly to bluster and warm over the A330 as an A330-200Lite. When this didn’t cut it the A350 was born.

Even then the initial A350, mooted around September 2004, was again a warmed over A330, but this time with a new wing, engines and composite materials. Although this version attracted orders from the likes of Qatar Airways (who signed for 60 in June 2005) other airlines like Emirates and Singapore were a lot less enthusiastic. Public criticism from the major lessors ILFC and GECAS further cast a pall over the initial A350 resulting in Airbus being forced back to the drawing board for the 3rd time.

The result was a new fuselage allowing a ten abreast seating configuration (as with the 777) and this wider cross section enabled Airbus to christen the A350 as the A350 XWB (Xtra-Wide-Body). The new A350 is positioned between the 787 and 777 in size and available in three initial versions (800,900 and 1000). It was also a significant departure from the existing Airbus lineup with most obviously a very different front end and nosegear setup. In fact rather than sharing an ancestry with the A330/340 it has more in common with the A380.

The mid-size variant, the A350-900, was first into production (indeed the short series 800 was eventually cancelled) and the prototype F-WXWB first flew on June 14, 2013. The certification programme for the A350-900 ran smoothly and it gained its certification from the European Aviation Safety Agency (EASA) on September 30, 2014. Deliveries commenced to launch customer Qatar Airways in December. The A350XWB certainly seems to have ticked the boxes with the airlines; designed to compete against the 787-10 and 777-8, whilst replacing older 777-200ERs and A340s, the A350-900 has sold over 660 units so far. The prototype continues as part of the test flight introducing new innovations such as larger sharklets, which will be rolled out to all production A350s.

The existing JC Wings and Phoenix moulds have both been heavily criticised but for different reasons. The JC Wings due to its nose profile and the Phoenix mainly due to its engine pylons and gear length / tyre size. There is plenty of space for Aviation400 to produce a worthy competitor and freed from the production of a mould during the design period of the real thing they should be able to create one.

Firstly the nose shape. The JC Wings mould does not reproduce the slight change in angle upwards beneath the cockpit but this Aviation400 mould does. Holding it up in front of a photo of the real thing the change is perhaps still a little too subtle but overall it matches very well. In general I think it is superior to both the JC Wings and Phoenix versions.

The fuselage is excellent including the complicated post wing area. My only complaint is that the tailcone is slightly too pointy and not cut-off early enough. On the plus side however this model has an almost unprecedented six aerials including tiny ones just forward of the wing underside and vertical stabiliser. 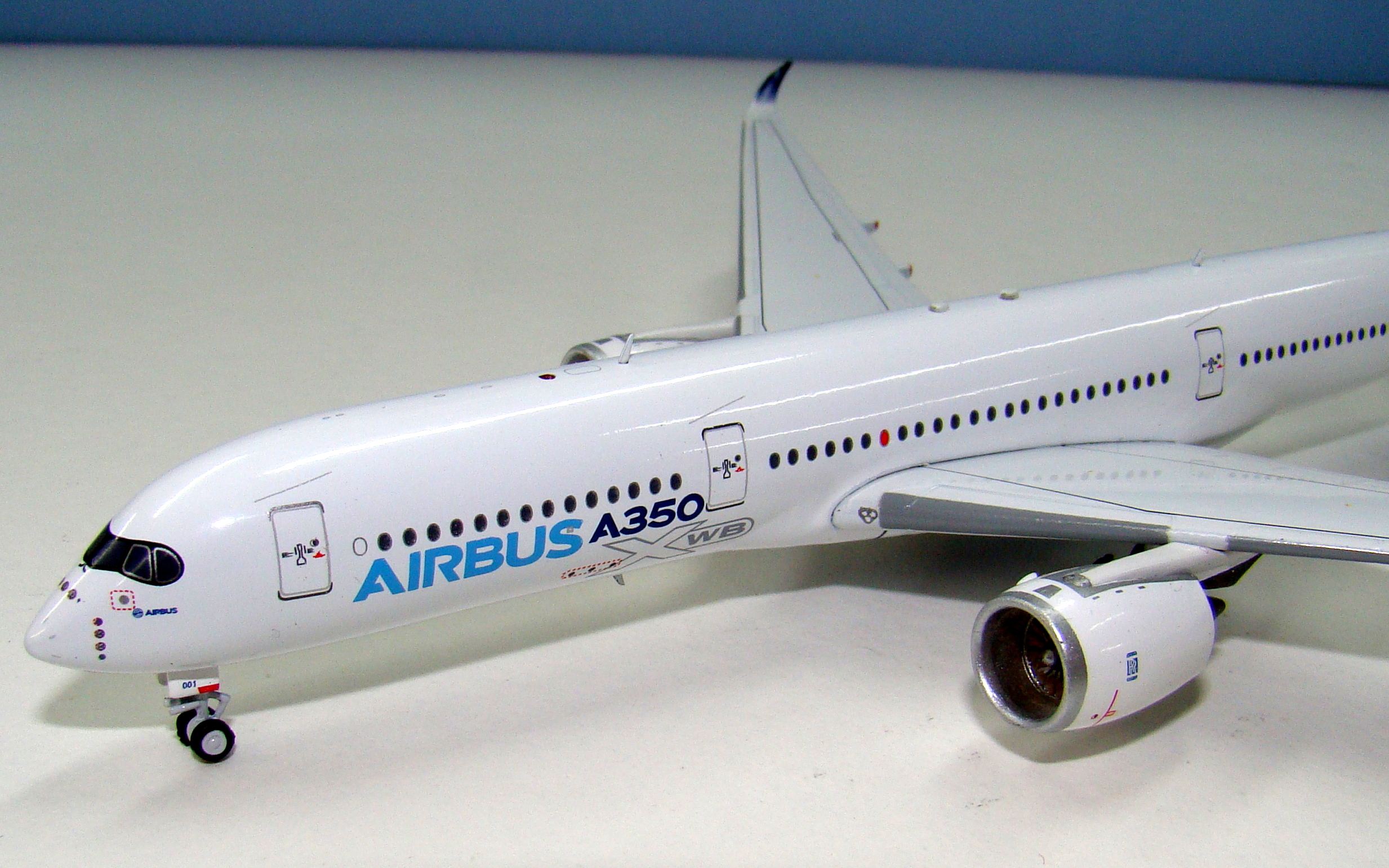 Even better the two tiny domes on the roof above the wing are not moulded in but separate units precisely moulded and fitted. Also as with their A340 mould this mould has both beacons (plastic inserts) on the upper fuselage and underneath. They are flatter and smaller than on the A340 so work even better.

The engine pylons and nacelles themselves are very good also keeping the engines well off the ground and closely fitting to the wings. There is a slight downward tilt to the engines which could be resolved if the front of the engine pylon was slightly deeper. I think the photos make it look worse than it is. The engine inners are very finely detailed. The engines are see-through, in fact the most see through I’ve ever seen in 1:400. The blades are so finely detailed that in fact it is almost too see through given there isn’t a real engine in the nacelle. It would help if they were darker but that is not a mould issue.

Looking at the undercarriage and it is very finely built. The nosegear is a good length but not as chunky as the Phoenix. The maingear bogies are separate pivoting units (as in the Phoenix 777) and so can be moved independently to replicate different positions. Unfortunately this does mean that they don’t look as realistic as the Phoenix ones. It doesn’t bother me much but I can understand it might bother some.

With a combination of features and exceptional detail to the aerials, undercarriage and engines this is a great mould. In my opinion it is easily the best A350 in 1:400 scale, however the maingear and engine angle cost it a point.

The Airbus house colours are modern, elegant and attractive. They are also quite simple and give plenty of whitespace for slogans. The prototype wears the standard scheme except that on the port side it also has a stylised XWB motif under the A350 titles.

Aviation400 have produced this scheme effectively perfectly. The colours are all good and shade into each other on the tail as they should. The fuselage titles are spot on and the diagnostic bandit mask of the A350 beautifully matched to the cockpit windows. Even the detailing of the sharklets is well reproduced. No complaints from me here.

Printing is an area that is becoming ever more competitive and the print quality of a few years ago is now no longer good enough to compete with the best. Fortunately Aviation400 recognise this and hit it out of the park with this model. The printing is superfine. The cockpit windows are particularly strong. The framing around the side cockpit windows is very finely detailed and yet fits well within the bandit mask.

As per usual engines and undersides show the true quality of printing and this model has plenty of detail in both areas. In fact the underside is so full of detail that it must be one of, if not, the best that I’ve ever seen. Phoenix could really learn a lesson here.

The engines however do have a couple of minus points in relation to colour. Just like everyone else Aviation400 don’t seem to realise the engine exhaust cones ought to be a metallic blue and not silver, whilst the engine fanblades are too silvery. These are easy fixes but do cost the model a point.

Construction quality is excellent but given all the extra bells and whistles this mould has it is a shame that the faults present relate to that old ‘favourite’ – rolling gears. The nose gear doesn’t sit 100% flat, one of the nose tyres is a bit rough and there’s one tab on a maingear tyre. There is also a slight rough edge to the starboard side maingear door rear edge.

This model raises the bar for A350s – not just because of the extra aerials, beacons, tiny domes, rotating gear trucks and fine nosegear but also because the main body of the mould is superb. The latter factor is enough to trump the existing moulds but with the new details plus great printing elevates the model substantially. I shall be making the AV400 A350 my A350 of choice from now on, which means I’ll no doubt be reviewing some more soon.

The range of cool 757s that collectors on the Diecast Aircraft Forum have come up with as suggestions for Boeing 757s for NG Models to make is impressive and long. Still NG in their customary […]

NG Models’ 757 mould has acquired an excellent reputation in the market since it was first released and has been used by both HYJLwings and Dream Air to create Asian 757s. Although hardly a major […]