Until recently the Boeing 757, as beautiful as it is, was a bit of an orphan in 1:400. Only Gemini Jets had regularly utilised a mould for the type whilst moulds owned by Dragon Wings, Herpa and Phoenix were either used rarely or of dubious quality, or both. The arrival of a new, and excellent, mould from NG Models seems to have spurred others into action and as well as Aeroclassics hinting strongly that they too will produce a 757 JC Wings have done what many have been crying out for for a long time and replaced the landing gear on the old Gemini mould. Here I review the first release on the updated mould.

The rise of small package freight within China has been driven by the success of internet service platforms such as AliBaba, AliExpress and Taobao and seen the creation of new Chinese cargo airliners equipped with fleets of Boeing narrowbodies. Initially these were mainly Boeing 737-300 conversions but increasingly they are 757s, often relatively recent examples equipped with blended winglets.

SF Airlines (Shunfeng Airlines) didn’t begin operations until the very last day of 2009 but eight years later is, by fleet size, the largest cargo airline in China. Nowadays it has 43 freighters in its fleet, the backbone of which has always been the 757. Hubs are maintained at its homebase of Shenzhen Bao’an International Airport and also at Hangzhou Xiaoshan International Airport on the East coast.

As you would expect some of the 757 fleet consists of ex-Chinese operated 757s (21Bs, 2Z0s and 25Cs from China Southern, Air China and Xiamen Airlines) but quite a few have a European history, having previously been leased from ILFC by European charter airlines. Several frames have also been sourced from American Airlines (often ex-US Airways frames).

The 04 Boeing customer code of B-1578 indicates that she was originally delivered to that stalwart of British charter airlines Britannia Airways. Leased from ILFC she became G-BYAJ on March 4, 1993 and remained on the British register until February 2008. By then she was with Thomson Airways and her re-registering merely signalled her transfer to the fellow TUI group airline TUIfly Nordic, where she became SE-RFO. At the time of her transfer she was updated with blended winglets. In February 2012 she joined Air Finland on a six month lease as OH-AFM.

She moved East in August 2012 joining MEGA Maldives Airlines, but after four years she was converted to a freighter and in November 2016 exported to China for SF Airlines. SF Airlines continues to grow and has begun to add widebodies to its fleet. The first of 5 767-300BCFs joined in January 2016 and in November 2017 a pair of 747-400ERFs was purchased at auction. Unusually, but fittingly, these were acquired through Alibaba’s Taobao site and although they have yet to enter service it seems the only way is up for SF.

The last JC Wings 757 I reviewed was the CAAC release back in August 2017. This was the last JC 757 with the previous set of landing gears, which had been criticised for some years. It was somewhat surprising that the pair of SF releases gained new gear as it had not been advertised in advance but given the new NG Models mould it is perhaps to be expected.

This mould is of course mainly the old Gemini Jets Boeing 757-200 and dates all the way back to 2000, however it has gone through multiple revisions mainly around the location of the seams. This version takes the newest winglet equipped version and attaches new gear to it.

I have never had major problems with this mould myself and the addition of new undercarriage improves it. The cockpit and nose shape are spot on, which is by far the most characteristic aspect of a 757. The fuselage, wings, vertical stabiliser and tailcone are also good. The engines on this example represent the Rolls-Royce RB211-535E4 and look great also.

The mould has a cradle mount, due to its age, however the wing seam join is very discrete and not an issue. The mould has also been updated with aerials and has all four present, which is a little unusual for a JC Wings model. Even the very small one forward of the tail is there and well sized. The winglets on the wings are tall and well shaped.

Onto the new landing gear and interestingly as with the NG Models mould the nosegear door is a little too small (previously it was too large). The nosegear leg is thin and detailed albeit the two forward pointing processes look a little too long. The nosegear doesn’t roll but the maingear does. This too is new and an improvement over the old style. The tyres are closer together and the maingear doors longer. The gear leg itself, only visible from the inside, is also more detailed and correctly forked. 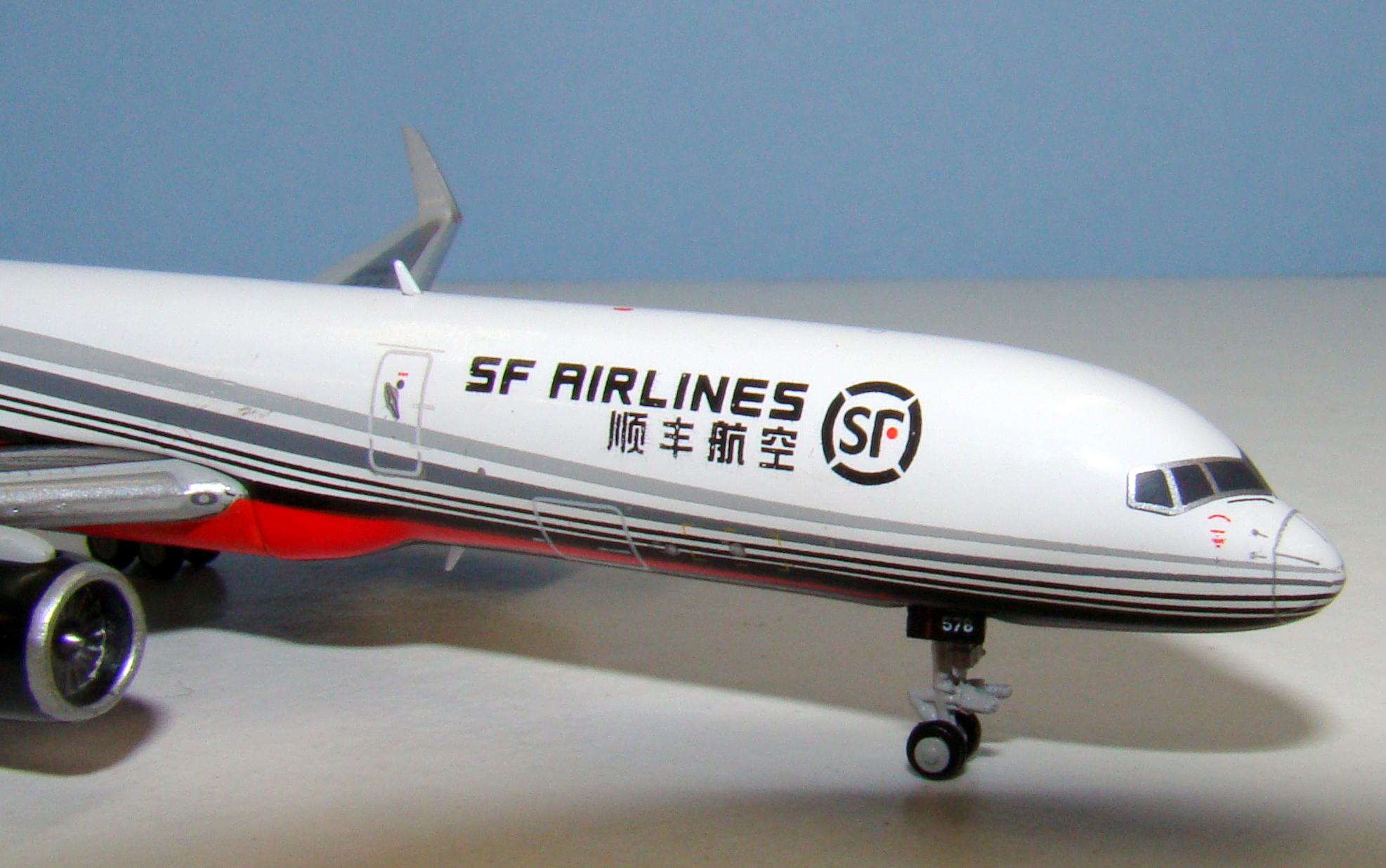 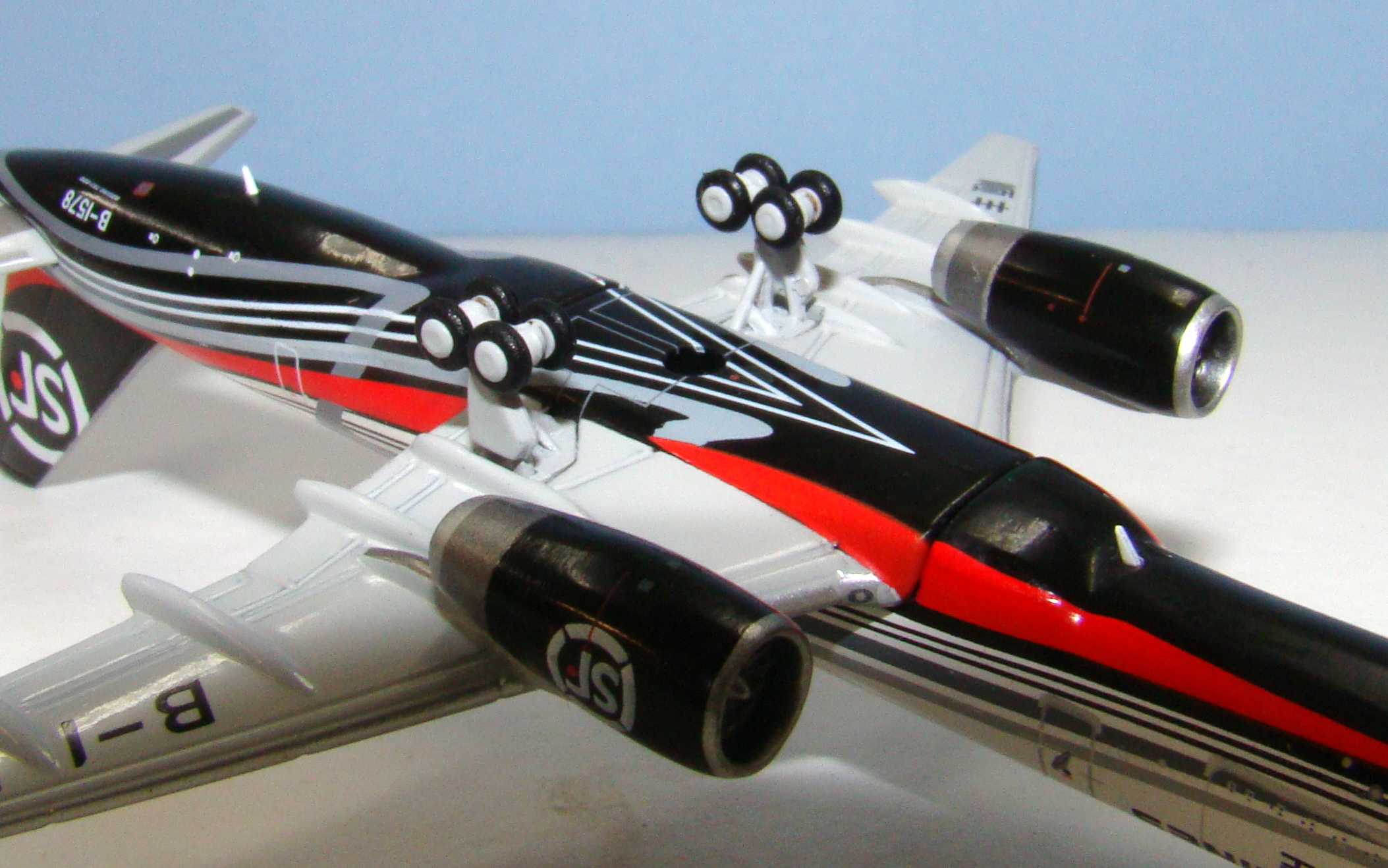 Overall the gear is a major upgrade to an already good mould, which becomes a very viable contender to the new NG Models mould.

Considering they are a cargo airline SF Airlines has a very attractive and eye catching livery. In fact there are two versions – white base and black base. B-1578 wears the original white base red, grey, silver and black scheme.

The scheme is quite complicated and although JC has done a passable version of it is not completely correct in detail. The colours are all fine but the placement of the wavy grey and silver lines is wrong in a few places. Most obviously the grey stripes that curve sharply downwards are both too far towards the rear. The first one should finish mid wing not at the rear margin whilst the second should bend sharply to meet the rear of the wing not half a wing’s width behind it. The same goes for the thick red stripe, which is too far towards the rear of the wing too.

The inaccuracy forces the stripes to change angle upwards towards the front of the tail when they should not do so. At the nose to the thin grey stripes are a little too high and don’t curve quite correctly. The rest of the scheme is done well. Titles, fonts and logos on the fuselage, wings and winglets are very good.

The nature of this livery means that it all holds together well enough on the model, but when you compare in detail to the real thing the printing is simply not correct.

JC Wings printing is usually very good and this model does contain some very good detail. Unfortunately there are two areas that undo a lot of the good work. Firstly the tailcone is almost totally painted and doesn’t have a big enough natural metal end. More annoying is the total lack of fuselage windows. This is a converted passenger 757 and so although in freighter configuration with the windows infilled their outline is quite clear in photos. JC Wings has decided to leave off the window outlines altogether, which I think is a mistake.

Construction quality of the model shows no mistakes or issues at all. There aren’t even any tyre tabs present.

The improvements to the mould that come with this model are a triumph. It isn’t often that an older mould can be upgraded so successfully and the changes make this a mould that is as good as the NG Models one. I doubt JC Wings or Gemini will use it like NG Models are using theirs but that is a choice of the manufacturer. The model itself looks very good but in accuracy terms is rather lacking and in the end the livery and lack of windows make it a slightly sloppy effort by JC Wings.

It is no coincidence that both Phoenix and JC Wings (the latter under the guise of BBOX) have recently produced examples of this aircraft given it was relatively recently retired with some fanfare, however it […]