There is definitely a parallel between the influence the Chinese airlines have over the combined global aerospace market and the influence the Chinese model collectorate has over the 1:400 scale manufacturers. Whereas it is a struggle to get an MD-80 made it seems easy to get a new mould for the ARJ21, an aircraft with a fraction of the success of its predecessor. I guess you can take it or leave it but with a personal interest in the developing Chinese scene I am keen to see an ARJ even though I admit I’d prefer MD-80s.

Manufacturing civil airliners is close to the pinnacle of design and development capable for a nation and its industry. China’s economic sophistication has been transformative within the past 20 years and considering they were assembling McDonnell Douglas MD-80s in the early 1990s it is not surprising that they have had their eye on providing homegrown products for their vast domestic airline market. The first fruit of this has been the COMAC ARJ21-700 although in many ways it has been more of a poisoned apple than a ripe peach.

The ARJ21-700 has seen such a protracted development cycle that it is perhaps better to percieve it as a technology demonstrator rather than serious civil airliner. First flight was originally expected in 2005 with service entry only two years later. This has proven hopelessly optimistic with the prototype B-970L not getting into the air until November 28, 2008. It would take another 8 years of development before the first aircraft entered service with, Comac affiliated, Chengdu Airlines on June 28, 2016. Since then Chengdu has received three aircraft (the third arrived only in October 2017). Optimistically Five aircraft were supposed to be in service by the end of the year as the type geared up for mass production. This has not eventuated.

Even after many years of delays mass production seems some way off, indeed I’d question if it ever will happen. Chengdu has reported a wide variety of issues and the aircraft stands no hope of getting foreign certification. This doesn’t really impede sales much, due to the backlog being almost entirely Chinese domestic airlines, but even looking through this order list the majority of the orders come from airlines of dubious repute (Henan Airlines, Joy Air) or leasing companies. The few orders from proper Chinese airlines like Xiamen Air have the air of political necessity stamped all over them. 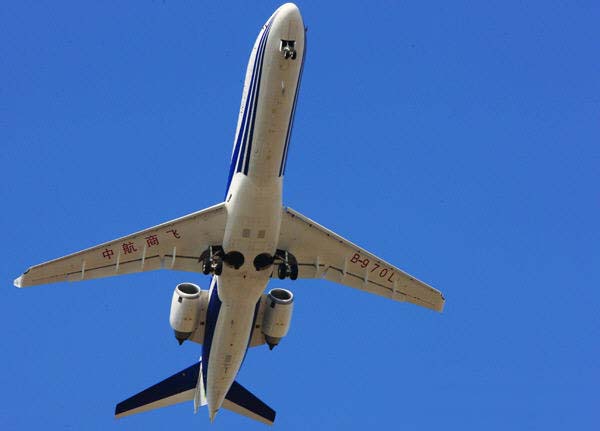 The aircraft itself looks like something of a chimera. Its MD-90 trunkliner ancestry clearly shows in the fuselage but the wings are new Antonov designed aerofoils. Engines and avionics are American. Compared to other aircraft in its design space like the C Series, E-Jets, Sukhoi Superjet, Mitsubishi RJ and even 737-700 it is an obsolescent design that is unable to compete on economics alone.

The prototype, B-970L, has now been withdrawn from use and is active only as a static test frame. Her place has been taken by later development frames. Although the CAAC certified COMAC to mass produce the ARJ last July I suspect even the Chinese authorities will have to accept that the programme has run its course and that they should move on to more viable products like the C919. Despite this the experience that has been gained by the Chinese industry must prove invaluable for their future endeavours and I expect that in twenty years’ time the ARJ will be seen as a valuable stepping stone for a successful Chinese aircraft manufacturer.

For more about the ARJ21 see my post over at Yesterdays Airlines: Fledgling Phoenix: The COMAC ARJ21

The ARJ21’s DC-9 heritage is shameless and it shares the nose section with the classic Douglas product, whilst the tail and tailcone also bear a strong resemblance. The DC-9 series is an aircraft lineage that manufacturers have struggled with in 1:400 scale. Only Aeroclassics has got it perfect. This mould has done a good job of it, although the underside of the nose is perhaps a little too rounded it is almost unnoticeable.

The rest of the fuselage and main wings are accurate. The prototype aircraft B-970L actually had a slightly different tailcone to production aircraft, with a conical piece at its top edge. This is understandably not reproduced here as a one off. I also think the shape of the winglets isn’t 100% accurate – they appear slightly too thin to me.

The landing gear is nicely made except for the solid grey wheel rims and the maingear undercarriage doors, which are slightly too short. Lastly the vertical stabilizer is in general good but the top margin isn’t curved enough at the front. The horizontal stabilizers are also shown basically flat whereas they almost always seem angled downwards in photos.

The model has both aerials but the small bump on the fuselage roof above the wings is not modeled in relief. All in all this is an excellent moulding, close to perfect but not quite exactly so.

The first ARJ prototype initially wore AVIC house colours but following the creation of COMAC to replace it the livery was retouched to show the new company logo on the tail plus of course new titling. Later ARJ prototypes have worn a more colourful orange rainbow scheme but B-970L was still wearing this predominantly blue scheme into 2013.

The colours are a dark navy blue plus a light green on the COMAC logo. Additional elements are in red. I can’t fault the colours used by Panda models here – they appear to match the test aircraft exactly.

The application of the livery is also excellent. The printing is of a high quality and placement of the sweeping lines from the fuselage roof to nose spot on. If I’m nitpicking the registration is perhaps not quite left enough in the blue swish and the COMAC logo doesn’t fit fully onto the winglets (probably because they are too small). These are minor complaints.

Something which can rarely be seen in photographs is the roof of the fuselage which has a thin red line running down it expanding into a red oval over the main entry doors.

The model’s printing is very good, especially on the underside and engine nacelles. It is only on the vertical stabiliser that some printing detail is lacking. The rudder could do with some detailing near the top and the obvious lines of the unit that moves the horizontal stabilisers on the tail sides are missing. A nice touch is that the fanblades are coloured a nice titanium dark grey and not shiny silver.

Construction of the model is good but not perfect. The wheels do not want to roll (as per usual I refuse to fault this since rolling gears are a pain) but less well the fit of the slot in wings to the fuselage is not as tight as I’d like. You do have t look closely but along the entire margin, especially at the rear, there is a very slight gap.

The COMAC ARJ21 is never going to be a major part of any collection; however it is a notable airframe and well worth adding to your collection. This is more so since this is a delightful little mould for it. Certainly the shoddiness of the real thing has not impacted the model! Panda released both this and the AVIC variant, plus they have previously made the Chengdu Airlines version. There is only one other scheme to be made as far as I can see, which I’m sure will appear in time. I for one am glad to see that not all the manufacturers are only interested in widebodies, even if I wish this was a DC-9-15.

In recent years the number of A340s in service has dwindled. Of the 218 A340-300s built only about half remain in service and mainly with secondary airlines. Nevertheless in 1:400 scale the type has seen […]

For a short time period during the early 2000s both Airbus and Boeing battled to develop ultra long-range derivatives of their respective A340 and 777 family aircraft. Both the resulting A340-500 and B777-200LR would only […]