In recent years the number of A340s in service has dwindled. Of the 218 A340-300s built only about half remain in service and mainly with secondary airlines. Nevertheless in 1:400 scale the type has seen something of a renaissance with two new moulds for the type in 2017 – from Panda Models and Aviation400 respectively. The latter manufacturer is new to the scale, albeit reusing an old name, and their A340 is a chance to take a look at what to expect from them looking forward.

The initial order was for six A340-300s but the first aircraft received were a quartet of A340-200s originally destined for Philippines that served for 6 months from October 1994. It wasn’t until June 1996 when Cathay’s first A340-313X was delivered. The first six aircraft were registered VR-HXA-HXF and were successful enough to garner Airbus a follow on order for 5 more frames (registered B-HXG-HXK since Hong Kong had passed into Chinese ownership by then.

I don’t actually get to fly that often but living in New Zealand but with family in the UK Hong Kong is a useful stopover point. I was lucky enough to have flown in 3 CX A340s (B-HXD, HXH and HXN) and I recall being pleased with the 2-4-2, 8 abreast configuration the type offered (it certainly beat a 10 abreast 777). The aircraft represented by this model, B-HXJ, first flew on June 9, 1998 and was delivered to Cathay on July 28th. She saw her entire career with Cathay Pacific and was retired on March 26th as the last of her type.

There are many A330 moulds floating about in 1:400 scale and since that popular type shares the fuselage of the A340 it is relatively easy to convert the mould into its four engine sibling. Indeed that is I assume the reason for the two new 2017 moulds. Aviation400 marked their debut in 1:400 with the A330 and swiftly after an A340. The output so far has been entirely Asian however the mould deserves greater attention in of itself and also as a harbinger of things to come.

The fuselage is well shaped forward with a good nosecone. As you’d expect from a new mould the wings slot in and they fit well. I do think the after wing strake is too short and moving to the tailcone this is also too short. On the real thing the end of the cone is in line with the rear margin of the tail above the green band but on the model it is in line with the band top. It is only a mm or so but is noticeable.

Excellently the forward fuselage dome is moulded in rather than being a fitted piece, however the two small bumps on the roof near the aft wing are not. Impressively the mould also features all six aerials including the small pair underneath the rear fuselage. They are all well sized, shaped and fitted. The other major innovations on this mould are the collision beacons atop and beneath the fuselage. They are in relief and are attached pieces made of red translucent plastic. This is an excellent added detail and provides a really nice 1:200 scale style touch of class.

There are no complaints about the wings, engine pylons or engines. In fact the engines and pylons are really well fitted to the wing. The undercarriage is nicely sized and well detailed. Unlike the JC Wings / Gemini mould it is the correct length and in the correct position. A nice added detail for the undercarriage is that the rear facing door of the central gear is represented (it is missing on the JC mould, but present on the Aeroclassics).

In most respects this mould beats the good JC Wings / Gemini mould. It is a closer thing compared to the Aeroclassics, which has nicer gear and a better rear wing fuselage join but is of course missing domes, aerials and now collision beacons. As a first mould for AV400 they have thrown down a good sized gauntlet to the other manufacturers.

Cathay’s most recent livery can be seen as a natural progression from the 1990s Brushwing scheme but also a bit of a bland workover of an excellent livery. The loss of the red and decrease in colours around the nose threaten to give it a rather unfinished look and although I like some elements (like the change in titles to above the windows) I don’t think it matches up to the scheme shown on this model.

Even though it is more complex than the current Cathay scheme the first Brushwing livery is still quite simple. The scheme has four colours: red, green, a light grey and white. Aviation400 have successfully reproduced the colour palette. The position of the livery elements is also fine. Everything is in the correct place.

Where the livery rendition falls down somewhat is in Aviation400’s quest for clarity. The printing of the livery is somewhat heavy across the entire model. This can be seen in the titles, which are a little too thick, but most clearly on the tail. The red band should begin to grade out before it reaches the rudder but does not, whilst the top of the brushwing is too darkly outlined.

Lastly the Swire flag on the lower rear fuselage ought to be red triangles on a white background. Aviation400 have forgotten the white background and instead it is the same grey as the fuselage band. Overall this is a decent effort only slightly spoiled by Aviation400’s desire to make everything as clear as possible. I must say the livery is well defined and clear but perhaps a little overly so.

Printing detail can go a long way to make a model look more realistic and Aviation400 have recognised this by undertaking JC Wings level detailing. Detailing around the L1 door and on the engine nacelles is brilliant, whilst underneath elements like undercarriage doors are outlined in a dark grey rather than black. 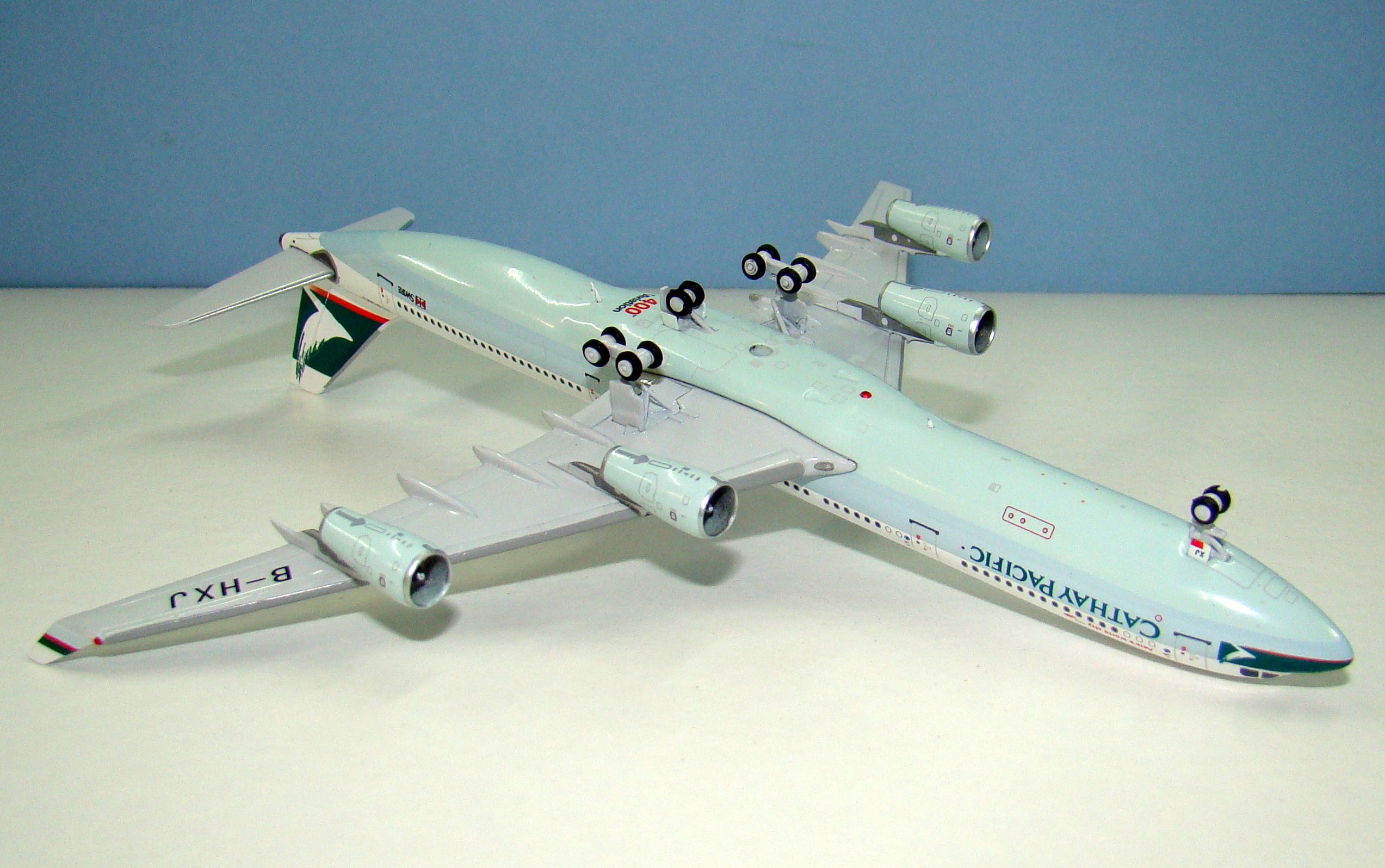 Less successful are the cockpit windows. They are better than Gemini typically manage however for some reason from the side the front windows seem to go upwards rather than being straight. They are also probably a little large.

Painting of non-livery elements like the undercarriage gear legs is also marred somewhat by the chosen light grey colour. This follows what JC Wings does rather than the more accurate versions produced by Aeroclassics and Phoenix. The fanblades are also a little too silvery for my tastes.

Construction quality of the model is topnotch. The model has a very solid and well made feel to it. The only issue here is that one of the nosegear tyres is missing some of its tread – as if a tyre tab was removed and damaged the tyre itself.

I feel I have to mention that it seems Aviation400 has taken up the mantle left by Witty Wings and is providing a nice plastic stand with each of its models (the exact same stand Witty used). Plus both my AV400 A340s came with a really nicely detailed, albeit plastic, pushback tug. I’m adding an extra mark on for these excellent freebies.

This is a highly commendable effort by Aviation400, which shows great promise for the future. I am particular happy with the aerials and the new plastic collision beacons, which are an excellent touch. Although tiny they glisten in the light and are surprisingly noticeable. It is pleasing to see that the new Aviation400 A350 mould also features them – hopefully I’ll be reviewing one of this promising mould in the near future. The addition of a stand plus a piece of GSE only elevates the package as a whole. Although there are quite enough Asian Airbuses being made in 1:400 Aviation400 are showing a quality that will hopefully enable them to grow out of the Asian market sooner rather than later.

The international aviation scene is nowadays awash with both special liveries and low cost carriers, however few of the liveries are asymmetric and few of the LCCs are particularly classy. HK Express has transformed into […]

Aviation history is rich with important airlines that are nowadays considered so obscure few enthusiasts, fixated on Airbus and Boeing 787s, have heard of them. In 1:400 scale Aeroclassics is the last bastion of releases […]