The Vickers Viscount was a rare success for the British aircraft manufacturing scene postwar selling well globally and even breaking into the US market. Unsurprisingly in 1:400 scale this type of important historic airliner is only delivered regularly by Aeroclassics who despite saying that Viscounts don’t sell has of recent been using their short Viscount 700 series mould to release some classic turboprops that have been missing from classic collections for too long.

The Viscount’s impressive operating statistics led to a wealth of orders for Vickers and by 1957 a new aircraft was being built every three days. The type made its way into the fleet of most major airlines in Europe and unusually even broke into the US market with Capital Airlines, Northeast Airlines and later Continental Airlines. When Capital was absorbed into United the latter kept the Viscounts going showing the type’s versatility even in the early jet age.

Out in Hawaii Aloha Airlines had gambled on the Fairchild F-27 to compete with Hawaiian’s piston engine Convairs and won. The type was a great success and following the 1959 acceptance of Hawaii as the 50th US state island traffic soared. Now Aloha was faced with the F-27s being too small for all of its routes but still being a small relatively poor airline it couldn’t afford new jets. Instead it looked to the second-hand market and acquired four Viscount 745Ds equipped with 56 seats.

The aircraft were introduced from April 1963. Two were sourced from Austrian Airlines, another from Northeast Airlines whilst in 1965 N7410 joined having previously been OD-ACW with Middle East Airlines and Kuwait Airways. Aloha’s experience with the Viscount was not an altogether happy one. The Aloha crews considered it under-powered and a poor flier whilst passengers thought it to be cramped. It is interesting that I have not heard these comments from other Viscount operators but maybe the type just wasn’t well suited to inter-island operations?

Interestingly Hawaiian Airlines also tried the Viscount out with a single frame in 1964 to see if it compared well to their Convairs. They too decided against acquiring more and elected to convert their Convairs into turboprops instead. Even so Aloha kept its Viscounts into the early 1970s and they wore several liveries.

Aloha’s unhappy time with the Viscount was capped with the loss of half of the fleet. N7415 was written off as late as August 1971 when it caught fire after landing due to an electrical short within one of the aircraft’s batteries. N7410 had a shorter career. On Friday June 27, 1969 she was taxiing for departure from Honolulu when the aircraft lost both brakes and steering. Embarrassingly the aircraft collided with the Hawaiian Airlines DC-9-31 N906H and was damaged beyond repair. The fault was caused by improper maintenance and fortunately none of the only 11 passengers on board were injured. The remaining pair of aircraft were sold to Aeropesca Colombia in late 1971 ending the Viscount’s time in Hawaii.

The current Aeroclassics Vickers Viscount mould for the shorter 700 series dates from 2008. Obviously the first thing that is obvious about it is that it has a sizeable wing seam mould where the cradle mounted fuselage attaches to the wings. This is reasonably common for moulds of the period and although not ideal, considering the complete lack of alternatives and commercial viability of creating a new Viscount mould, or even updating this one, it is more than forgivable. 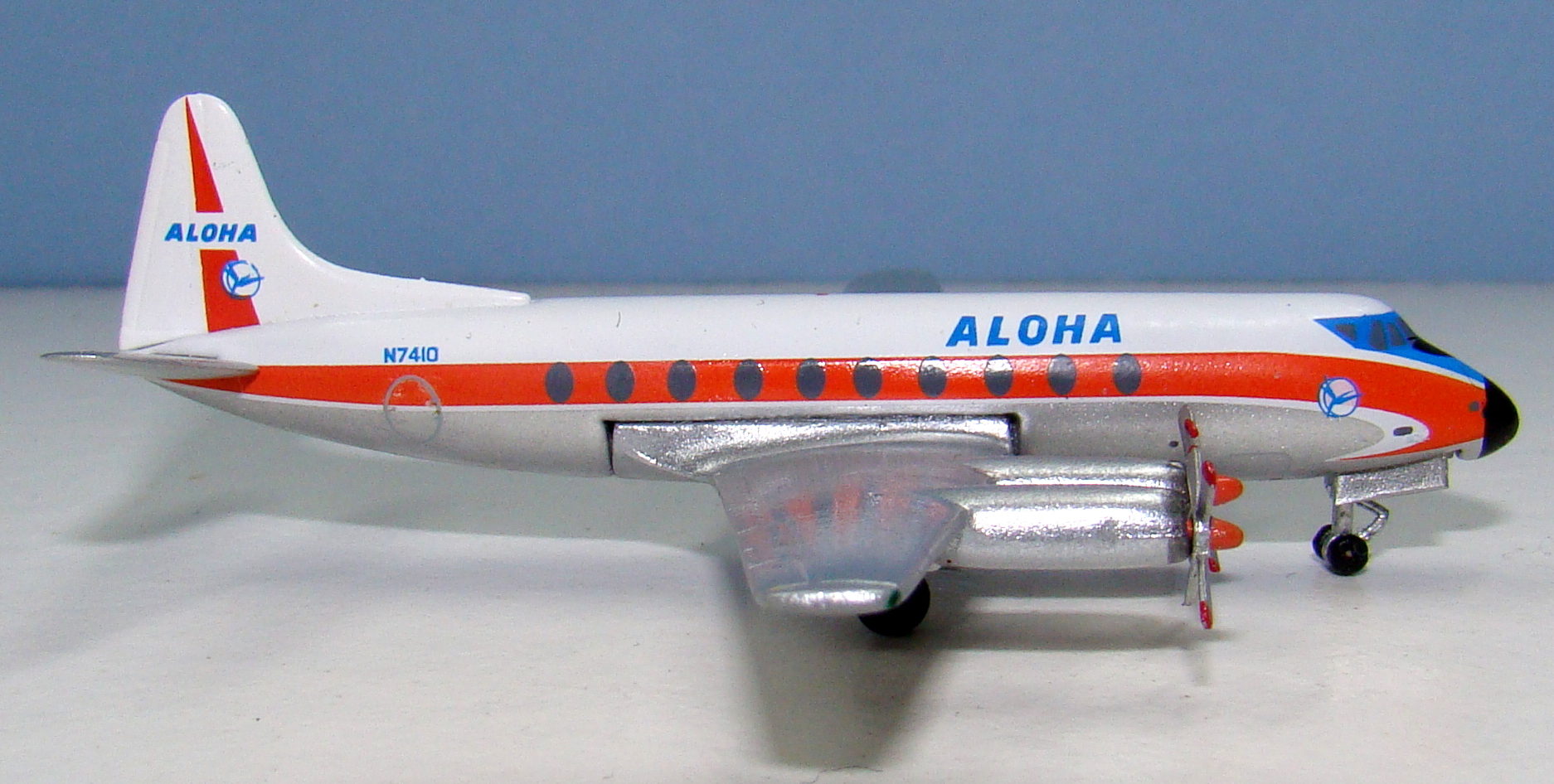 The shape of the fuselage of this mould is good, particularly the sharp transition from the cockpit to the nosecone. This mould really features an early series aircraft and doesn’t have the slightly sharper nosecone of the radar equipped Aloha Viscounts but that again can’t really be helped. 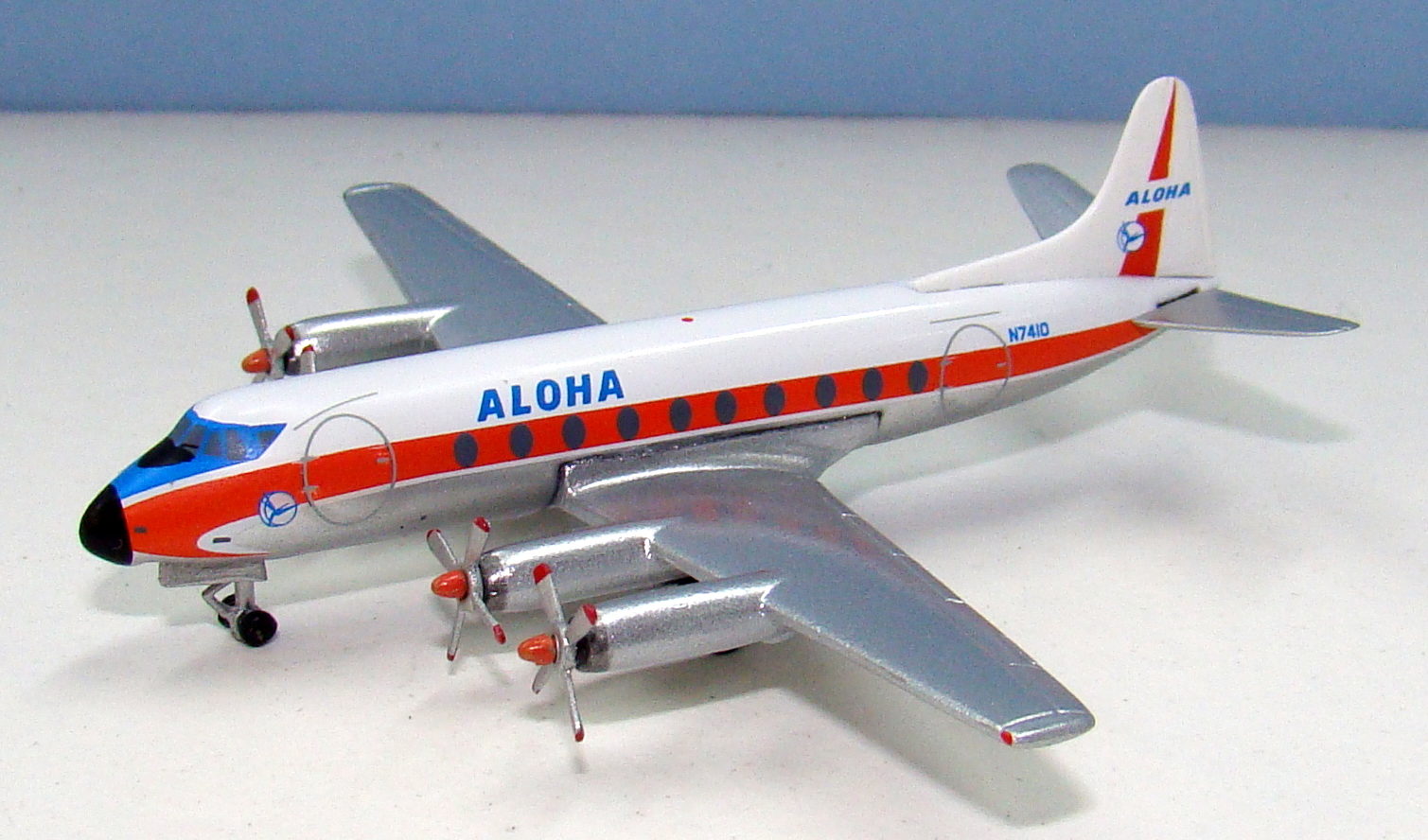 The wings, vertical stabilizer and engines are nice. One of the interesting features of the Viscount’s engines is how long and thin the nacelles are almost melding into the wing. That comes across well on the mould.

Lastly the undercarriage on this model is excellent. It is very finely detailed and could teach Gemini and Herpa a thing or two about how to make smaller aircraft gear legs.

The Viscount wore at least three different schemes in Aloha Airlines service. The last scheme was the classic flower power scheme of the late 60s/early 70s; prior to that they wore a far less attractive thick blue cheatlined scheme with the line moving onto the rudder. The delivery scheme for the Viscounts is perhaps the most attractive using bare metal and a bandit mask to best effect. This is the livery worn by this model, but should it be?

The main feature of the colours is a lovely thick red cheatline curving up from the nose. The tail also features a red stripe. The other colour is a medium blue which is used for the cockpit mask and the titles. The colours of the model appear fine although possibly the red is a little washed out.

An interesting feature of the model is the size of the main titles. Some photos of Aloha Viscounts wearing this scheme have much larger ALOHA lettering stretching beyond 5 windows whilst the model’s titles are much smaller – less than four windows. This is probably not a fault though as many photos of the other fleet members in this scheme shows them with smaller titles, matching the models. Then again this aircraft was delivered only in May 1965.

By January 1966 it was in Aloha’s ‘Blue’ scheme and I can’t find any evidence that it ever wore the delivery colours. I guess this doesn’t matter but perhaps one of the other Viscounts that definitely wore the scheme would have been a better choice for this model. Here’s a selection of photos of this aircraft in service – so you can see what I mean.

Back to the model and there is a small imperfection in the bandit mask. The rear margin of this ought to curve but on the model it is a straight lined margin. The vertical stabiliser has a larger error since the red stripe should expand at its base to cover the entire rear margin but does not do so. It’s almost as though the person doing the research used a single photo where the horizontal stabilisers obscured that portion of the tail and didn’t do any further research.

The rest of the scheme is replicated well with the small bird of paradise flower visible under the cockpit and on the tail. There is a small anti-glare panel ahead of the cockpit and the prop spinners and prop blade tips are correctly red. 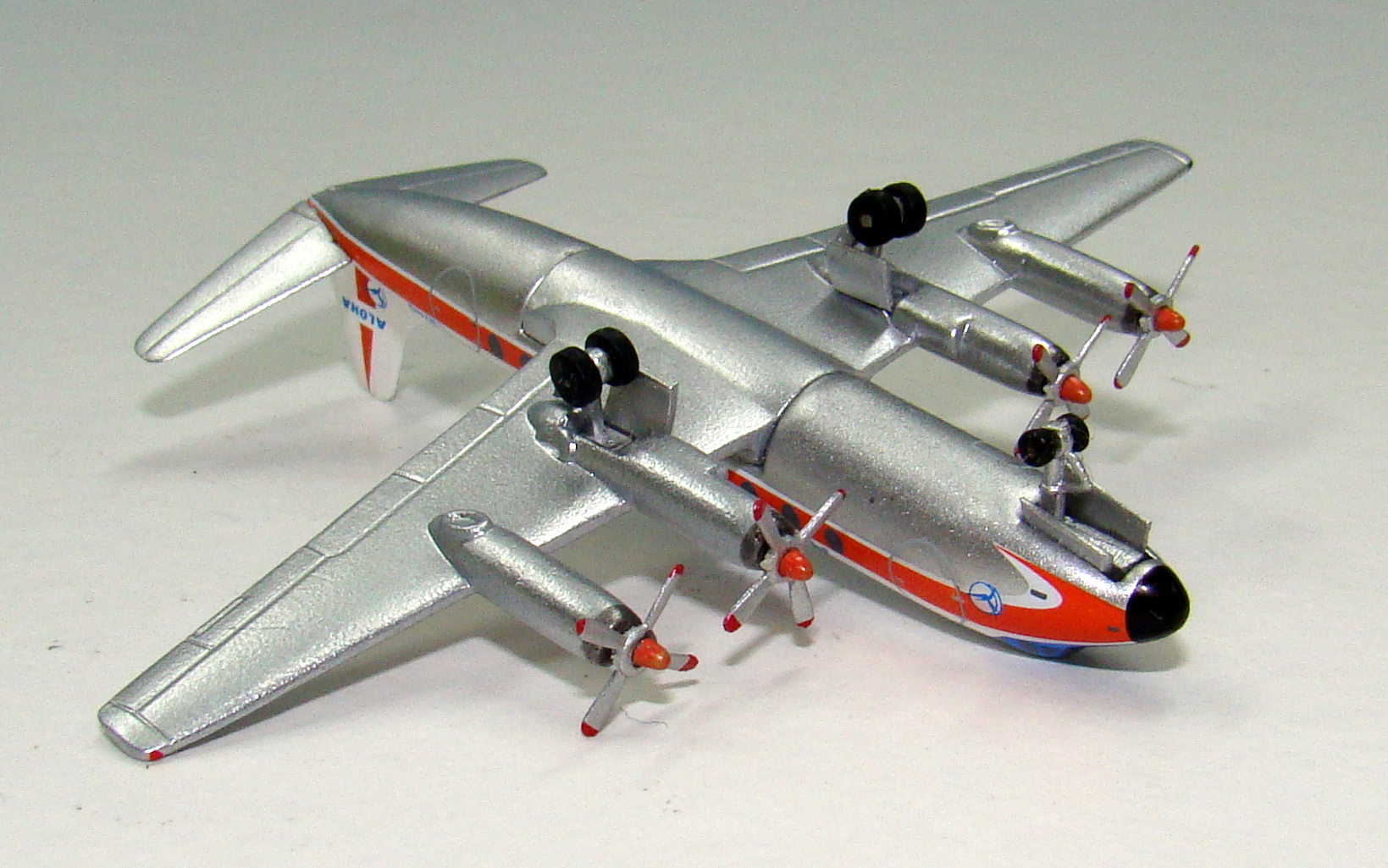 The small Viscount doesn’t lend itself to large amounts of detail printing however even so there are some gaps. The nose region is finely detailed and the large oval entry doors are also great. It is really only the engines that feel like a minor letdown as they lack the quite large exhaust grills and the prop blades lack the black leading edges that should travel for about two thirds of the prop’s blade.

The model is quite a deceptively complex one to put together with by my calculation seventeen parts, not including the tyres. The only error is that the starboard side landing gear has not been well attached and doesn’t fit flush to the ground.

Aeroclassics continue to be the only manufacturer really putting any effort into aircraft that represent the rich aviation history of last century. That is extremely commendable and does tend to mean I give them an easier ride than I would give say Phoenix. Nonetheless yet again more care in the research department would have made a historically more accurate finish. Even so this model is a decent one and one I am happy to include in my collection.

The rugged and efficient DC-6B saw service across the globe from flying First class passengers on its debut to hauling cargo of questionable legality later in its twilight years. The type was used by a […]