Nowadays in 1:400 scale you can’t turnaround without tripping over a Boeing or Airbus narrowbody, however it is surprising how many of them are inaccurate or poorly made, or both! The A321 has in particular been poorly covered because despite the belief of most of the manufacturers it isn’t simply a stretched A320. Now newcomer HYJLwings has started pumping out A321s using its own mould finally someone is paying proper attention to the A321. The packaging is certainly superior but does the model pass muster?

Dragonair has had an interesting history with periods strongly connected to Hong Kong’s primary airline, Cathay Pacific, and periods in direct competition with it. The first period of independence came to an end in January 1990 but it was three years until a new branding and new fleet were introduced. By the end of 1993 Dragonair’s fleet stood at 6 A320s and Airbus products have formed the continuing foundation of the fleet whether Cathay has had influence or not.

In April 1996 Cathay’s stake in Dragonair was reduced and the airline regained some independence. Symbolically a Dragonair flight operated the last service out of Kai Tak in 1997. Two years later the Airbus narrowbody fleet was increased with the addition of a pair of new A321s leased from ILFC. These were joined by a secondhand example in 2000 and then in 2002 by another trio of new build aircraft. The fleet of A321s has remained relatively stable even as the A320 and A330 fleets have grown steadily. The only additional A321s have been a pair of ex-Qatar Airways aircraft bring the A321 fleet to eight units.

Cathay Pacific regained control of Dragonair in September 2006 and has developed the airline as its main link to mainland China. In fact during 2013 Dragonair ranked 4th for seats to mainland China whilst Cathay didn’t feature in the top 20. Despite its close association with its parent the not unexpected brand realignment with Cathay did not occur until January 2016 when it became Cathay Dragon.

The fleet now stands at 47 Airbus aircraft; however Dragon does operate one of the oldest fleets in Asia. Nearly half of its A330s date from before 2000 (thanks to transfers of some of Cathay Pacific’s oldest units to its subsidiary) whilst none of its A320s were built after 2012 and none of its A321s after 2008. Accordingly fleet replacement is on the table for Cathay Dragon.

In September 2017 Airbus announced a new order from the Cathay Group for 32 A321neos, which will be operated by Cathay Dragon replacing their entire current narrowbody fleet of A320s and A321ceos from 2020-2023. B-HTH was delivered on September 24, 2003 and so given it’ll be seventeen to twenty years old by the time of her replacement it is unlikely that it’ll see any further service when retired from the Dragon fleet. 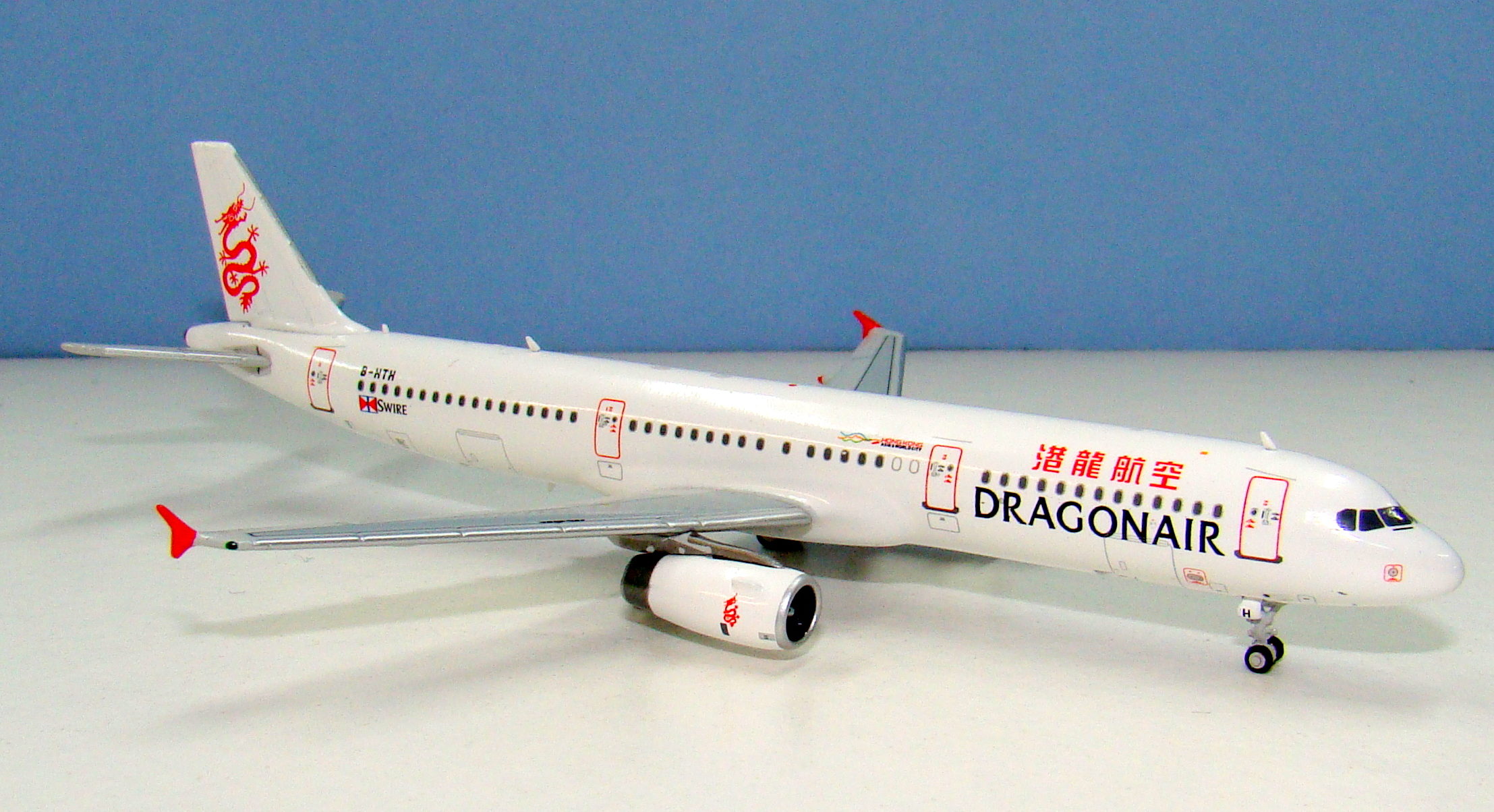 This mould is truly superb. The shape of the nose is perfect as is the rest of the fuselage. For those of the opinion that this is a direct copy of the Aeroclassics A321 there are a few pointers that suggest this is not the case. Firstly the detailing around the wing/fuselage forward join is different and there is no gap. Secondly the size of the winglets are different – larger on the HYJLwings mould.

As I have pointed out a few times previously when reviewing A321s the type is more than just a stretch A320 since the wing is equipped with double-slotted flaps. I have reviewed 4 other A321s so far and both the Phoenix examples have ignored this completely. HYJLwings have paid close attention and the wing is excellent. The detail is wonderful – fine etching to mark the flaps and ailerons, a great shape and a lovely snug fit to the fuselage.

Another major strongpoint of this mould is the undercarriage. This is such a negative point on the JC Wings mould and one of the less good aspects of the Aeroclassics. Here the tyres are excellent, both in size and detail, whilst the slightly forward angle of the gearleg and size of the gear doors are accurate. The maingear also has proper tyres with wheelhubs which help to give the engines good clearance even when they are the larger IAE engines, as is this case here.

On the aerials front the model has all the major aerials (3 on the roof and 1 on the rear belly) and is only missing the very small one on the forward belly. All the aerials are well placed and sized.

Overall this is one of the best moulds in 1:400 scale. I can’t see anything wrong with it.

Dragonair’s 1990s era livery was relatively unusual in the early 1990s before euro-white tookover the globe completely, but was never particularly impressive considering the scope the Dragon logo gave the designers. Nonetheless it was clean and stylish. A nice touch was the English titles underneath the windowline with the Chinese characters above.

To reproduce this livery in 1:400 scale should be quite easy but then again mistakes with all white liveries can stand out even more. Essentially the HYJLwings rendition of the scheme is accurate. The colour, size and detailing of the dragon logo is very good both on the tail and engines.

Red detailing on the door frames, winglets and even the end of the flap track fairings is present. The small Hong Kong Asia’s World City titles aft of the L2 and R2 door is present as is the tiny HONG KONG and Oneworld alliance logo after the L1 door. Rego and Swire logo are also present and correct.

The only point of contention is the main DRAGONAIR titles themselves. They are nearly perfect but in extreme close up you can see that the font of the real thing is not sans serif. Looking at the model the A and G of the DRAGONAIR are sans serif. It is almost un-noticeable but even so it loses the model a point. 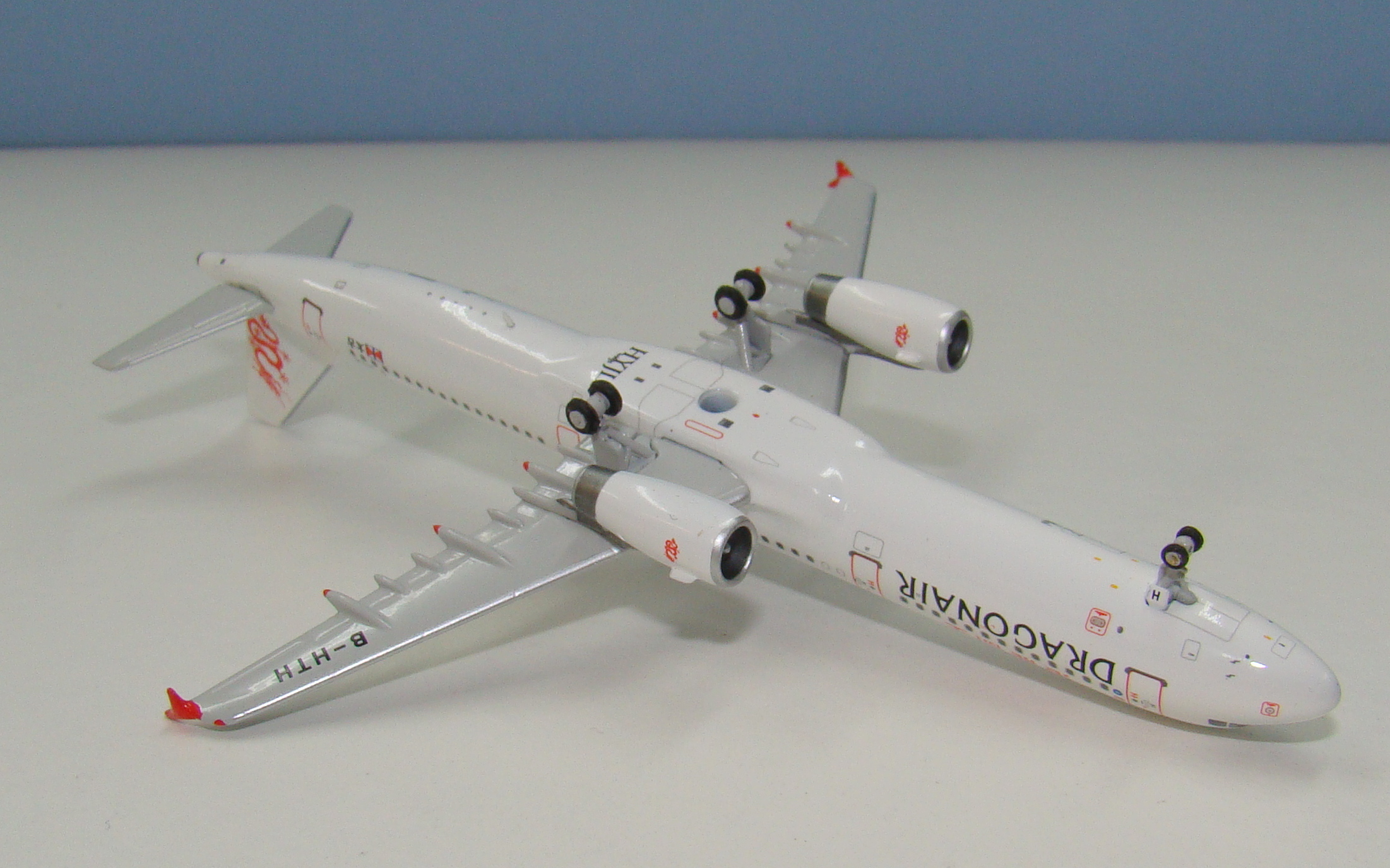 HYJLwings models do cost a premium and for that you expect high quality printing. Don’t worry – it is there. The printing is precise and finely detailed, plus there is lots of it. This is especially the case on the underside of the model. They do choose to leave off the radome itself, but I know this is a little contentious with collectors and so I’m not losing any points over that. I was particularly impressed to be able to read the miniscule Hong Kong Asia’s World City titles albeit with the aid of a magnifying glass.

In a model with a production run of only 120 units you also expect build quality to be high and as with the rest of the model it is. Everything is in its place. For example A321s with IAE engines often suffer from poor engine placement on the pylon, but not here. There are also no tyre tabs – see Gemini and Phoenix it can be done! The only issue is that the 2nd rooftop aerial is not firmly attached and its looseness opens it up to movement and loss.

This is a topnotch model on a topnotch mould. It may have cost me a bit more than usual 1:400s (partly because I bought it through taobao via engtaobao) but it is well worth the cost. HYJLwings may be small fry but they have put the time and effort in to produce an exemplary model. Then of course there is the packaging it comes in – a bespoke wooden box with artwork wrapper and the customary HYJLwings collectors card, apron section and handling glove. The majors could learn a lot from this sort of care and detail. HYJLwings are not taking the collector for granted.

No Point Airport has released its SXM Series airport diorama which includes a groundfoil and building kits of the Princess Juliana International Airport. The terminal building kit offers extendable and retractable jetways. Groundfoil features include […]