Part of the benefit of Gemini’s partnership with JC Wings is access to the latter’s stock of excellent regional aircraft and that includes the Fokker 100. Technically not considered a regional type at the time of its creation, when it formed part of the mainline fleets of airlines such as American, US Air, Swissair and others, by today’s standards it is very much a regional jet. So in many ways it could be considered ahead of its time. It is a shame that Fokker was not able to survive to benefit from it and now its legacy is gradually coming to an end as the F100 leaves airline service.

The Fokker 100 of course owes its existence to its predecessor the Fokker 28 Fellowship and was, along with the turboprop Fokker 50 (itself a major upgrade of the F27), part of an ambitious programme to produce a new generation of aircraft for the venerable Dutch manufacturer in the early 1980s. As with the F28 itself the F100 was really ahead of its time. Unlike the competing British BAE 146, which was in many ways a niche product designed for STOL environments, the F100 with twin engines was a viable general purpose aircraft in the same size range as the 737-200 and BAC One-Eleven.

At the time the F100 first flew, in November 1986, regional airlines were beginning to proliferate in the USA but were stretching to operate the much smaller Saab 340, DHC-8 and ATR-42. It would be another 20 years or so until regional aircraft in the size range as the F100 would be needed and by then Fokker was itself bankrupt.

This wasn’t due to the F100 itself, which sold reasonably well, at the time still fitting in at the lower end of mainline airline fleets. Orders for 75 from American Airlines and 40 from USAir were high points; however Fokker struggled with profitability due to high costs, strong competition, problems at parent DASA and the unwillingness of the Dutch government to back the company. These combined pressures saw the demise of its aircraft production division in March 1996.

Nonetheless spares support for the fleet of Fokker jets continued and the nearly 300 aircraft built have seen continued service with a range of front line airlines. Austrian was one of these. It had not been an early customer for Fokker jets but had taken delivery of 8 Fokker 50s from 1988. In 1997 several Fokker 70s were added but the larger F100s didn’t join the Austrian stable until the last quarter of 2004. Austrian had acquired Tyrolean Airways the year earlier and converted it into Austrian Arrows. Fifteen ex-American Airlines F100s were acquired, the airframes still having much service life left in them.

The last service by an Austrian Fokker was operated at the end of December 2017. The last machine was OE-LVE “Zagreb” which was given special titles and operated a farewell flight on November 29, 2017 as OS1100. The Austrian Fokkers have been replaced by Embraer E-Jets but for at least some of them there life still isn’t over as they have been sold to Alliance Aviation of Australia where several have entered service. OE-LVE has become VH-UQA and entered service in February.

I admit to not being able to get enough of the Fokker moulds JC Wings has made and it is a major shame that they are used so infrequently as they are uniformly excellent (F50, F70 and F100). The mould is a cradle type but this is a classic example of how to do that properly. The seam follows the wing/fuselage fairing join line well and shows the correct shape, plus it is discrete and hard to see.

The nose and nosegear are great, certainly good enough to pass close inspection. It may be that the down curve from the cockpt isn’t quite strong enough and the nosegear doors slightly too short but these are minor concerns. The rest of the fuselage moulding is great and it is pleasing to see the pair of roof humps just aft of the wings moulded in.

The engines and vertical stabilizer are practically faultless. Probably the mould’s greatest failing is the shape of the diagnostic rear fuselage airbrake tailcone splitter. It is much too square on the model when the lower half of it should curve gently upwards.

This mould is old enough, and infrequently used enough, that it hasn’t been updated to have aerials but although they’d be nice I’m not knocking points off for that. Overall it’s a great little mould and one I’d appreciate seeing utilized more often.

Austrian Airlines has had a fairly torrid recent history but has kept hold of its traditional red and white branding despite its takeover by Lufthansa and the subsequent transition to the Tyrolean AOC. The re-establishment of Austrian proper in March 2015 saw a partial rebrand with a new “my Austrian” tagline. Personally I think the current scheme is rather tacky and inferior to the previous one, which fortunately this F100 still wore up to its retirement albeit with Austrian titles rather than Austrian Arrows.

This version of the Austrian scheme has the shadowed paper plane style red swish mark. The colours being used on the model look good to me and accurately reflect the bright red and light blues of the real thing. The designer has been paying close attention and the placement of livery elements is good except I think the blue belly should have been extended further forward. I’ll come back to this in the printing section.

The engines correctly have the austrian.com titles on them and pleasingly the blue colour continues between the thrust reverser nozzles. The titling is also accurate and on the port side of the aircraft the special ‘Austrian says goodbye’ and ‘Fokker 1988-2017’ additions are faithfully represented.

This is an excellent representation of the livery in question aside from the belly colour length but this itself is part of a larger problem.

First let me say that the printing itself is of a high standard on this model in the sense that it has been reproduced well. There’s plenty of detail on wings, nosecone, engine nacelles and tailcone. In addition things like the aircraft registration are reproduced accurately on the nosegear and above the cockpit windows.

That is the compliments out of the way. When comparing to the real aircraft it is clear that something has gone amiss in the printing across the front of the model. Firstly the cockpit windows are very poor. The side cockpit windows are both the wrong shape. The middle ones are too thin and the corner ones are the wrong shape altogether. This accentuates the other issue – that the gap between the cockpit and main entry doors is too large, leaving the tiny Star Alliance logo in acres of space.

This is caused by the cockpit window shape but also by an overall problem with the rest of the livery. For example the Au of Austrian is not far enough ahead of the blue belly, which as I have said is itself too short. The result is far from disastrous but in comparison to the real thing it is quite obvious and the cockpit windows simply look wrong. 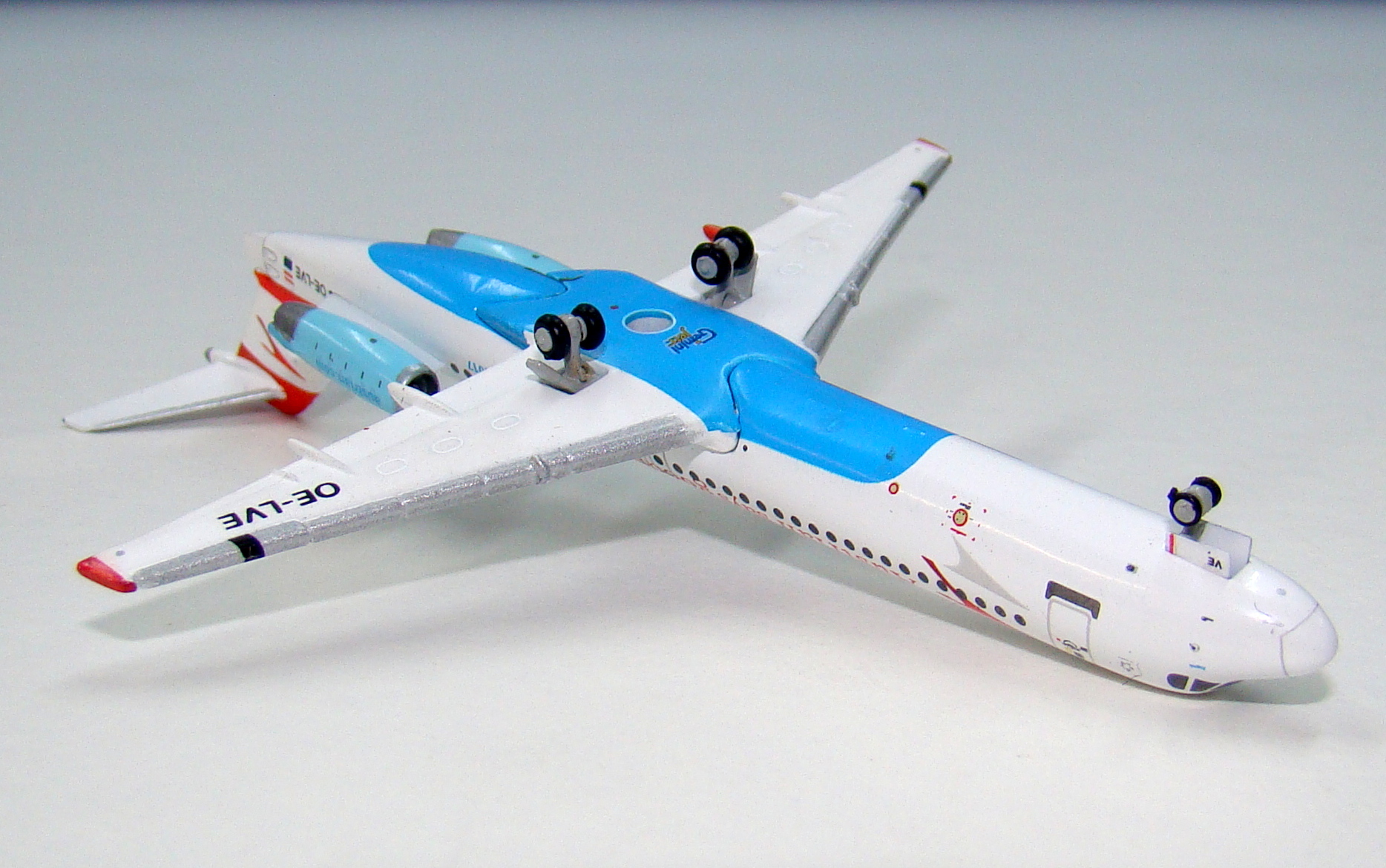 Positively the build quality of the model is great, aside from the almost customary tyre tabs – this time present on both the nosegear and rightside maingear.

It is a bit of a shame that the final finish of this model has suffered somewhat from the poor cockpit printing. This seems to be something of a recurring feature of Gemini regional jets (see the JetBlue E-195 review). In other ways however this is an exemplary release and still garners a reputable score.

Mould sharing has been a common theme throughout the history of 1:400 scale and when the casting is a good one it is a win-win for everyone. In some cases, where two brands models are […]

Modern graphics and application technologies have opened up a range of exciting possibilities for airline liveries. Too often these are ignored in favour of blandness, for example recent offerings from Lufthansa and SAS are uninspiring […]