Unlike the NG 757s HYJLwings’ A321s have caused less of a stir in the market than they probably deserve, possibly because there are just so many A321s being made in 1:400 scale that a few more doesn’t matter much. Regardless there has been a steady stream of interesting versions coming out, although admittedly they tend to mostly feature Chinese airlines and Lufthansa. The quality and price are high but production numbers are low, meaning they are hard to find but generally worth the effort.

Tianjin Airlines has grown strongly since its beginning as China’s largest regional airline. Originally formed in 2004 as Grand China Express Air, with a large fleet of Dornier 328Jets and Embraer ERJ-145s, since the name change in 2009 the airline has gradually pivoted towards becoming a mainline carrier.

The first A320 arrived in only October 2011 but as of August 2018 the fleet consists of 90 aircraft, roughly half of which are still E-Jets, albeit the much larger Embraer 190 and 195. In fact, the metamorphosis has included the acceptance of widebodies and long-haul routes to London, Moscow and Auckland.

The main base remains at Tianjin’s Binhai International Airport so it is little surprise that the airline was keen to promote the 17th National Games of China, which in 2017 were held in its hometown with the uninspiring slogan ‘National Games for a Healthy China’. The games represent the premier sports event within China at a national level and are held every four years. A total of 417 events covering 33 sports were included with 12,721 athletes competing between August 27 and September 8.

Interestingly despite operating 28 A320ceos and 5 A320neos there are only 2 A321s in the fleet and both aircraft wear special schemes. The second frame was only delivered after the games, and, as B-302X, wears images of Tianjin’s cityscape, but the first, being delivered new on lease from China aircraft Leasing Group on August 16, 2017, went into service in the special Games livery.

Tianjin Airlines hasn’t been immune to the liquidity issues that are afflicting its parent the HNA Group and has had several aircraft leases delayed. It also had to cancel a bond issuance scheduled for late last year due to ‘market fluctuations’ related to the HNA groups struggles to pay debt.

In February 2018 the HNA Group sold more of its share of Tianjin to the local government and this has no doubt assisted in enabling it to largely avoid operational issues caused by the ongoing troubles. If the HNA group collapses it appears likely that the local government would step in to save at least the Tianjin Airline subsidiary. In the meantime, B-8389 continues to display her attractive special scheme. 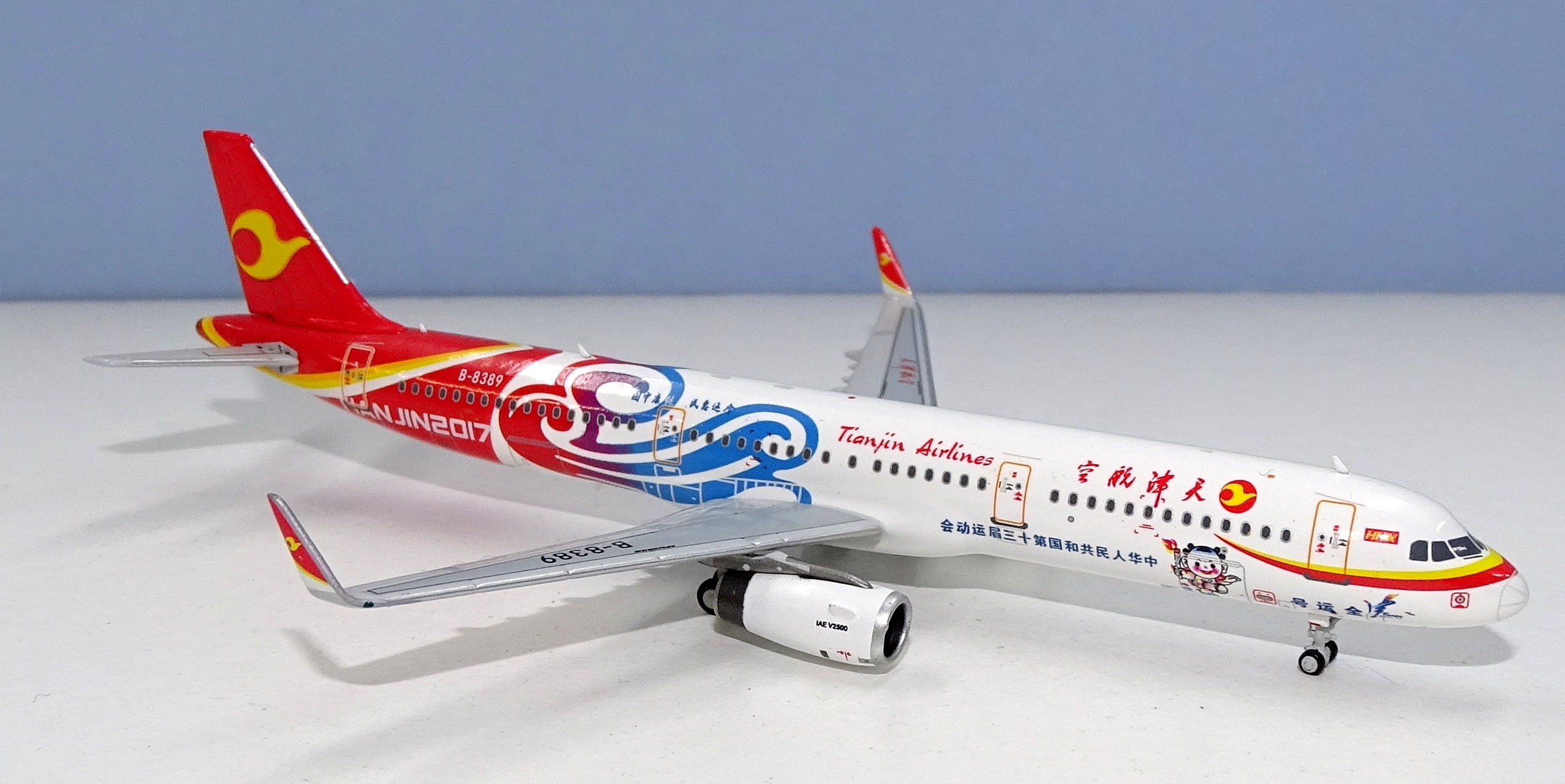 This mould is truly superb. The shape of the nose is perfect as is the rest of the fuselage. For those under the opinion that this is a direct copy of the Aeroclassics A321 there are a few pointers that suggest this is not the case. Firstly the detailing around the wing/fuselage forward join is different and there is no gap. Secondly the size of the winglets is different – larger on the HYJLwings mould.

As I have pointed out a few times previously when reviewing A321s the type is more than just a stretch A320 since the wing is equipped with double-slotted flaps. None of the other A321 moulds with sharklets, aside from that from JC Wings (which has its own problems), gets this aspect correct. HYJLwings have paid close attention and the wing is excellent. The detail is wonderful – fine etching to mark the flaps and ailerons, a great shape and a lovely snug fit to the fuselage.

Another major strong-point of this mould is the undercarriage although I have noticed some variability in recent HYJLwings A321s I have acquired. The tyres are excellent, both in size and detail, and the size of the gear doors are accurate. Nonetheless this model at least doesn’t correctly have the slightly forward-facing gear leg of the real thing, plus the nosegear appears slightly too short. It may very well be a construction rather than a mould issue, but it does mean that the ground clearance of the IAE engines is poor. This is common amongst all manufacturers’ IAE engined Airbuses (and sometimes exacerbated by poor engine fit). I’d like the gear leg here to be slightly taller.

The same goes for the maingear which is otherwise very good. On the aerials front the model has all the major aerials (3 on the roof and 1 on the rear belly) and is only missing the very small one on the forward belly. All the aerials are well placed and sized.

The games livery overlays the relatively sterile standard Tianjin scheme, which itself shares several features with the old Hainan Airlines livery (the nose striping and the colourful door outlines). The special scheme includes a red rear section and a wispy cloud-like emblem, which transitions from red to light blue. Forward low on the fuselage is Chinese text and the games mascot JinWa (“Tianjin’s baby”) which was lampooned by daring Chinese ‘netizen’s as the ‘ugliest thing that they’ve ever seen’. A topiary version of the mascot was torn down following the criticism but the maligned character survived to take part in the games nonetheless.

This is the sort of tricky livery that manufacturers like Phoenix and JC Wings often struggle with. There is a lot going on in terms of livery elements and colours. HYJLwings have however managed impressively to get the details correct. The core livery aspects are properly coloured yellow and orange with details like the shadow under the tail bird logo present and effective.

The gradual gradation from the red to the light blue of the wispy cloud element on the rear fuselage is very good, my only complaint being that perhaps the light blue isn’t light enough.

The complicated Chinese script on the forward lower fuselage and the JinWa baby and official games logo are also very well rendered. The details are evident under even magnifying glass and everything is placed and coloured beautifully.

I expect high quality printing from HYJLwings models and as per usual they don’t disappoint in terms of the fidelity of the print, lack of QC errors or for the most part what is shown. This model has the nosecone radome printed and excellent underneath detailing (I especially like the rego markings on the nosegear doors visible only from underneath). Nonetheless there are a couple of places where some extra printing would be useful.

Firstly, the wing root on the real thing has a clear set of lines where the wingroot faring joins the fuselage. These lines are missing on the model. It is almost as if the manufacturer is scared to print the lines in case people mistake this for an old-fashioned cradle mount. The other place missing some extra lines are the engine nacelles. Neither of these criticisms are serious.

Build quality is excellent throughout, everything is fitted well and properly built.

I admit to some slight annoyance at the cumulative cost of all the NG and HYLwings models I am acquiring, however there is little doubting the sheer quality of the models themselves. Volumes are low but the number of liveries being produced is very high and yet there are few, if any, design issues with the schemes being made. JC Wings announced this same model ages ago and as per usual have failed to deliver it within a reasonable timescale. There is simply no reason to wait since HYJLwings have a superior mould and overall superior product. For at least Chinese and German A321s they should be your only destination.