It was a surprise to many a few months ago when NG Models announced that they were producing a new 787-9 moulding. Until then they had primarily been engaging with classics collectors on the forums and producing wonderful 757s. They had already got the unwanted attention of Gemini Jets. The 787 is however an avowed march straight into the territory jealously guarded by, and hard fought over, between the two relative giants Phoenix and JC Wings / Gemini Jets.

Apparently, the mould was made because the founder of NG admires the 787. I wonder whether NG just has aspirations to become a major player in this scale? They can certainly do so if they continue to build models of the quality they have up till now and also continue to engage so positively with the collectorate. The latter is something none of the other major manufacturers do and has been welcomed with open arms.

The first model that NG showed on their new 787 mould was a ‘sample’ Qantas Yam Dreaming. Qantas are one of the benchmark airlines that Gemini produce, and I’ve been told that when Phoenix made a version of this model it got some phones ringing. Regardless this model is I believe officially a sample, but if you want one I suggest checking with NG retailers.

There are five other NG 787s released this month (all Chinese), but should the NG mould strike fear into Phoenix and the others who have 787s of their own? Let’s find out.

Unlike the Boeing 777, for which Qantas was involved in the early design group but then never ordered the type, they didn’t waste much time in ordering the new Dreamliner, placing an order for 45 with 20 further options and 50 purchase rights way back in December 2005. Then the 787 underwent massive delays and Qantas itself went through considerable strife and it wasn’t until September 2013 that the first 787 joined the Qantas group. Even then it was not with Qantas itself but with their low-cost subsidiary Jetstar.

By September 2016 Qantas was back making record profits and feeling confident that the 8 787-9s it had on order (following earlier order cancellations) would be joined by the majority of the aircraft it had options and purchase rights to as long as they could ‘demonstrate that we can make money out of the eight we have’. In May 2018 that need had obviously been demonstrated as the carrier ordered six further 787s, whose delivery would enable Qantas to replace its remaining 747s by the end of 2020.

The first 787-9 in Qantas colours was delivered in October 2017 and the first four frames were used to open Qantas’ new and pioneering direct service between Perth and London Heathrow. This was the first non-stop scheduled passenger flight between Australia and Europe and the world’s third longest flight at the time. The Qantas 787s are configured in a three-class configuration with 42 business class, 28 premium economy and 166 economy seats.

Qantas has of course a decent history of incorporating Aboriginal designs into its fleet with the famous Wunala Dreaming and Nalanji Dreaming 747s as well as the more recent Yananyi Dreaming and Mendoowoorrji 737s. The most recent aircraft to acquire one of these beautiful liveries is the fourth 787-9 VH-ZND, which was painted into the Yam Dreaming livery at Everett between February 5-13th 2018 prior to delivery.

The scheme was adapted from a 1991 painting by the late Emily Kame Kngwarreye by the indigenously owned Balarinji design studio. The aircraft was named after the painter when it arrived after its 8,366 km delivery flight at Alice Springs on March 2. Nicknamed ‘Spot’ the stunning Dreamliner operated its first revenue service on March 6, between Melbourne and Perth. Ten days later it flew its first international service, between Melbourne and Los Angeles.

Over the next decade the 787 is likely to become the backbone of the Qantas fleet and no doubt Yam Dreaming will be as well known as Wunala Dreaming before her.

The competition within the 787 arena in 1:400 is fierce and at least until now JC Wings has been the winner, with what is an excellent mould for the type. Phoenix has a mould also whilst Gemini come a distant third with their cradle fit mould. It remains an interesting observation that despite sharing production and moulds Gemini do not have access to the JC Wings 787. That is all a sideline however as I’m here today to talk about the new NG Models 787. 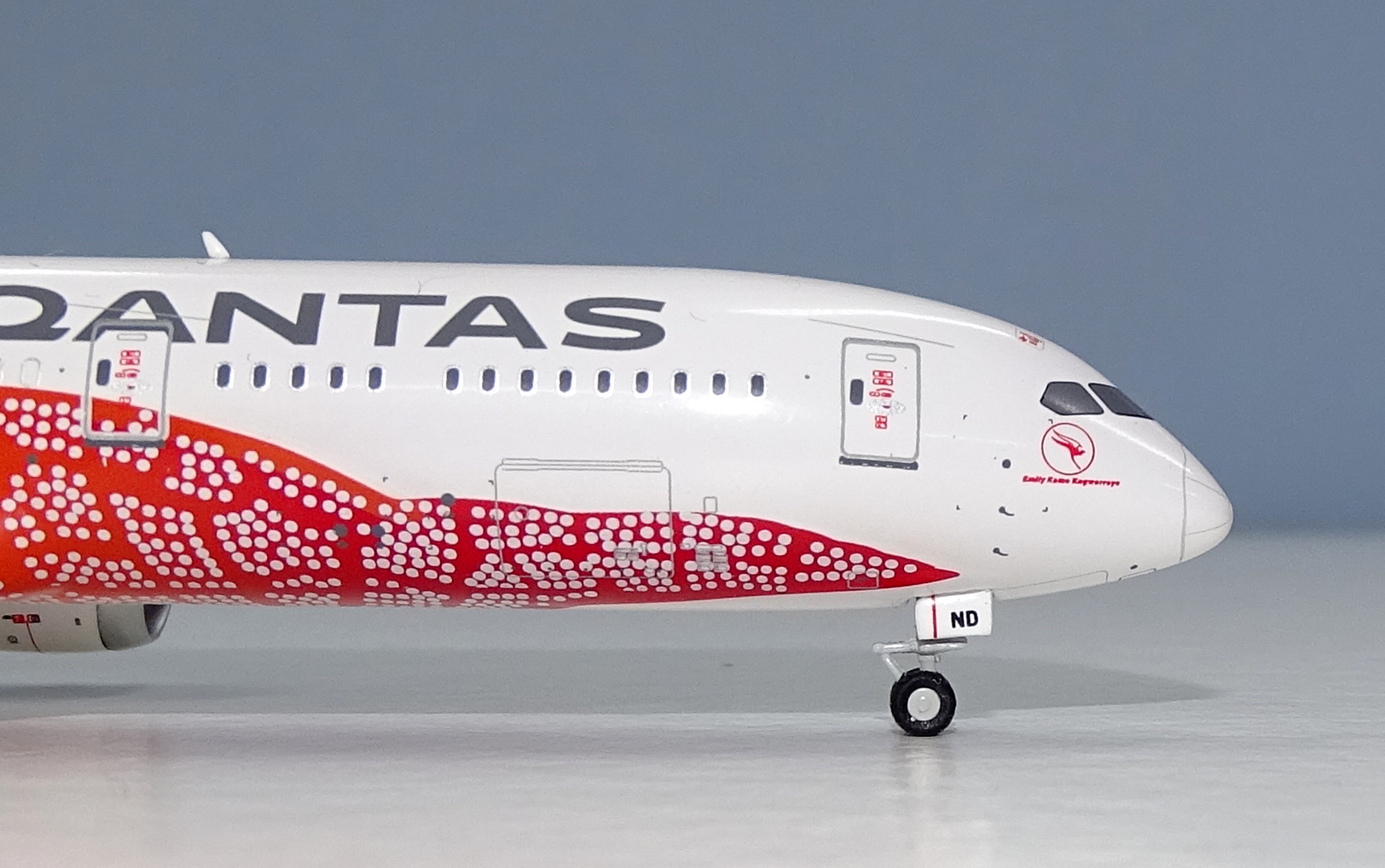 The nosecone is well shaped and actually bears a strong resemblance to the Phoenix mould. In keeping with that the very subtle change of angle beneath the cockpit isn’t really evident. As with the Phoenix the fuselage is not quite as deep as the JC Wings mould and the nosecone slightly pointier. Both look good but I do think the JC Wings nose is slightly better as the angle on the underside of the NG is a little sharp. If anything, the NG Models mould makes the 787 look more attractive than it actually is!

The nosegear is again like the Phoenix mould in that it is slightly taller than the JC Wings. The gear leg is very finely detailed and better shaped than the Phoenix but the rear process is perhaps a little too long. Once again, the gear and leg are very good but I think the JC Wings version is slightly more accurate.

The rest of the fuselage on the NG mould is impressively shaped, especially the underside which has the large structural bar running down its centre in relief plus the various inlets and bumps by the wingroot. The angle of the horizontal stabilisers is somewhere between that of the Phoenix (too low) and JC Wings (higher) and is probably the most accurate of the three. 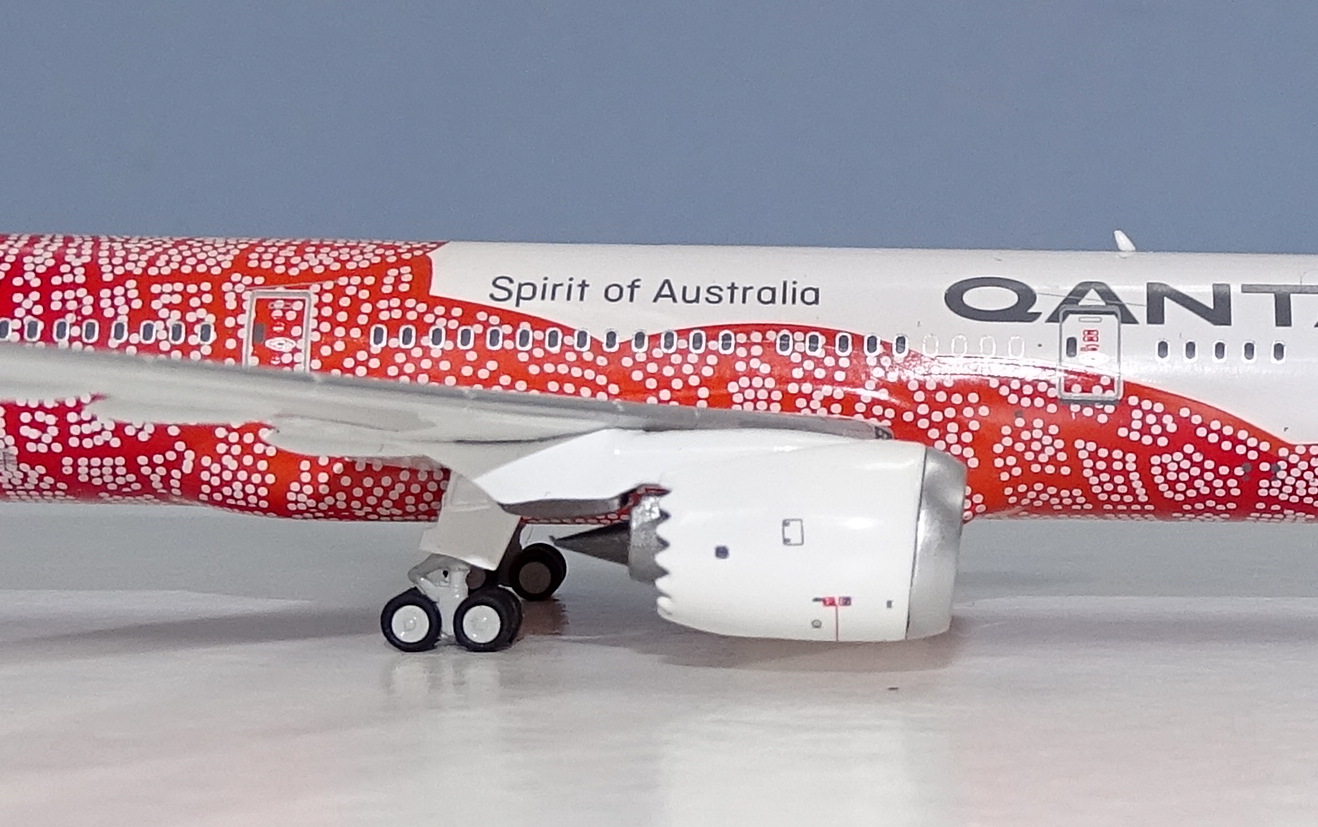 To my eye there is nothing wrong with the wings, which angle nicely, are finely detailed and turn up ever so slightly at the wingtips. The mould also has very good engine ground clearance partly achieved because the maingear is quite long. From the front the engine fanblades are excellent. The engines are see-through as you’d expect in 2018 but the number and size of the fanblades is better than on the JC Wings and Phoenix moulds. The angle of the engine forward line plus the width of the rims is also correct and both better than any other mould.

The Qantas 787s are very light on satnav domes but the model has all four aerials fitted and they are better sized and shaped than the JC Wings ones. What is not moulded in is the tiny hump just after the wings on the roofline but this doesn’t feature on the JC mould either and only the Phoenix has it.

I have previously scored the JC Wings 787 as a 10 and the Phoenix as an 8. This NG Models mould falls somewhere in between although it is far closer to the JC Wings than the Phoenix. It is a very good mould and beats the JC on several points. Nonetheless it is the nose, nosegear and engine pylons that I think just give the JC Wings version the edge. Even so I won’t hesitate to buy the NG mould, especially given the huge delays JC Wings models often have. 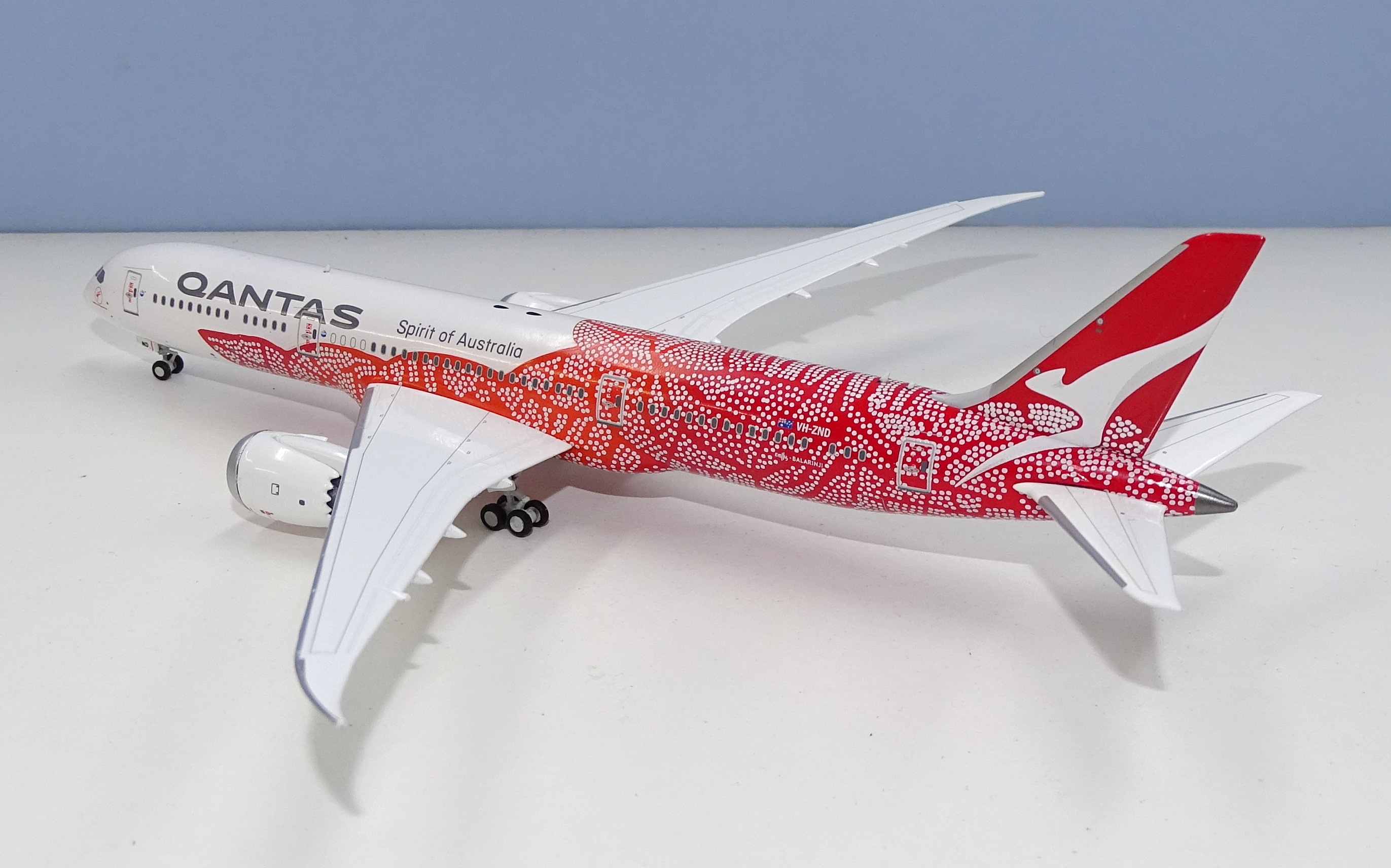 In the coming days there will be a more detailed comparison of all the 787-9 moulds at Yesterday’s Airlines.

Reproducing the Aboriginal liveries of Qantas must be one of the biggest and most difficult tasks for any 1:400 scale designer. The recent Phoenix version was widely lambasted for the lack of orange gradation it displayed, as on this scheme it is not just the dots that can trip up the designer but the subtle colour changes along the fuselage.

This aircraft also features the latest version of the classic Qantas livery an update that while not perhaps particularly necessary was actually, in my opinion, a classy improvement. The new space-age style kangaroo looks great on the tail and the placement of the classic roundel on the nose elevates the scheme in terms of class. Even the standard Qantas livery has been known to trip up 1:400 manufacturers (Aeroclassics titles on A330s being a good example) so can NG do what Phoenix could not and create one of the most difficult liveries in 1:400 scale?

The answer is a resounding yes they can. Now I haven’t counted each and every spot but where I have looked the patterns appear accurate. As importantly the colour gradation is attempted very well. Starting with red at the underside of the front fuselage and changing gradually to an orange over the wings then grading to the dark red of the tail soon after the L3/R3 door.

Early photos of the model appeared to show slightly too much orange but I assume that after tips from people on the forums NG modified this (as they have improved several models). The livery itself looks so different in different lights that it is hard to get it 100% and I am sure it could be argued there are some areas that aren’t orange enough or aren’t red enough but I think it would be difficult to improve on this effort.

That is not to say the livery is perfect. At the front right underside the spots are too close to the upper margin of the red area and the colour of the titles looks too light. The real thing has almost dark gun-metal titles not as light grey as here. Still it feels churlish to complain about these minor elements (the titles themselves are well sized and use the correct font) and the creation of this livery is superb. 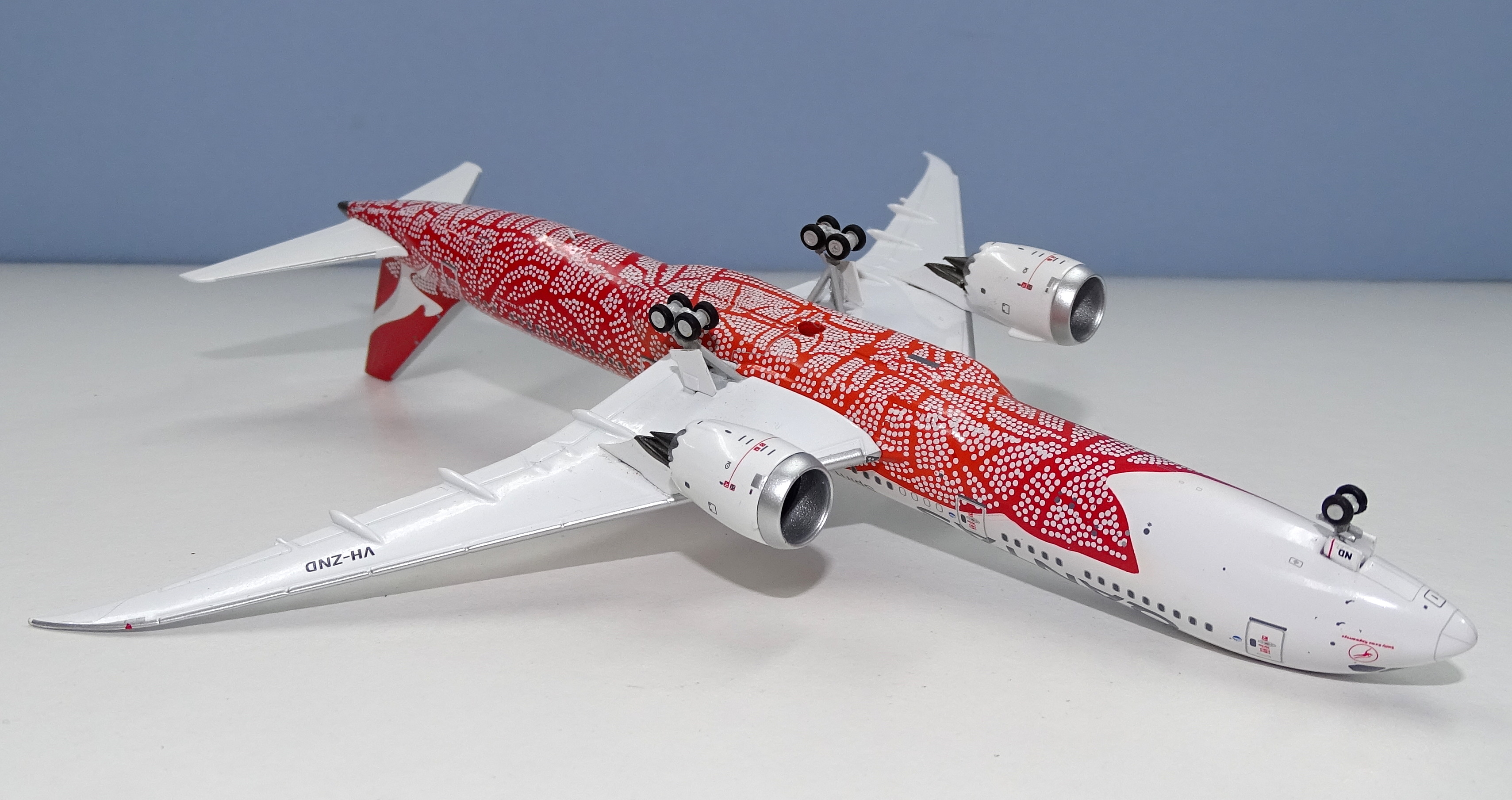 Printing quality amongst all the manufacturers has improved markedly in recent years but JC Wings and NG Models have together set the bar very high. The detail and clarity of the printing on this model is exceptional. Under a magnifying glass the text of the aircraft name under the classic roundel can be read and the Balarinji text inside the red rear under the registration is similarly crystal clear and precise.

It is a shame therefore that one small but significant print detail has been missed. That is the ND at the tail top. 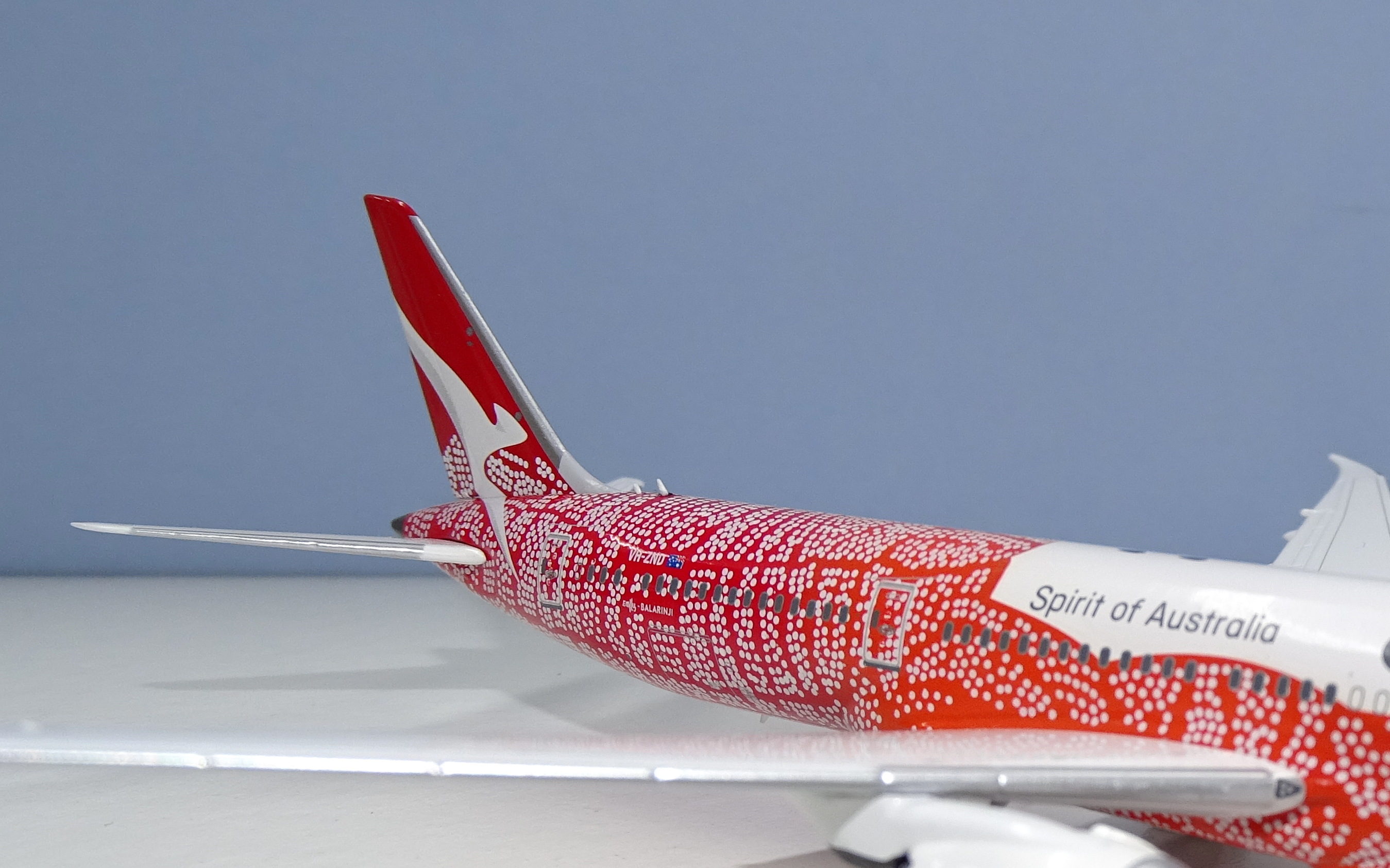 Quality of the model is topnotch. There are no concerns over the quality of the components or their attachment.

NG continue to prove that they have the capability to produce top quality models and listen actively to the collectors that buy them. ‘Made by collectors for collectors’ you might even say ?. I know for a fact that this won’t be NG’s last mould of the year (in fact 3 others may appear before January) and this 787 is more than an able competitor to the existing moulds out there. It is superior to the Gemini and Phoenix offerings by some distance and almost on par with the JC Wings mould. NG however are not hampered by the long production delays that go with JC Wings so if I was an existing 1:400 manufacturer I would be anxiously looking over my shoulder. This sample model successfully reproduces one of the most difficult liveries in existence and with only minor changes this 27 could easily have been a 29 at least.

Next Week at The Diecast Flier-June 19-25th!