JC Wings is well known for being tardy when it comes to the time period between its release announcements and their arrival in stores. Only a novice would pre-order from them nowadays, however they do often make unique models nobody else is making and so the wait, albeit frustrating, is sometimes worth it. This house colours MD-90 was announced first in January 2019 yet did not hit the shops in China until October. I’m not sure why they just didn’t announce it in September since it is hardly the sort of release they need to beat Phoenix too. Nonetheless it is here now and hopefully a great addition to my house colours display. 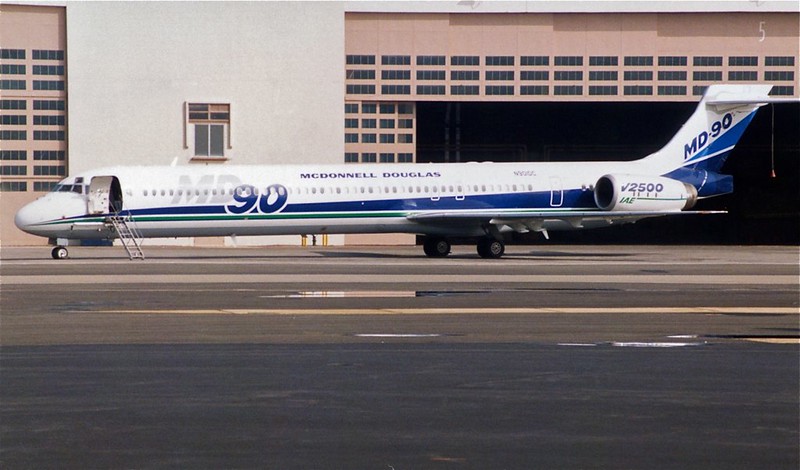 As Boeing has recently discovered to its cost with the 737 MAX there is only so far that it is wise to stretch the development of an aircraft series. Back in the 1980s the 737 still had plenty of life in it and Boeing’s 737 Classic series of 737-300s and 400s were excellent competition against its arch-enemy McDonnell Douglas, if less so against the Airbus A320.

Douglas were of course past masters at stretching their aircraft. They successfully stretched the DC-8-50 into the DC-8-61/63 and rescued the programme. The DC-9 started life at only 31.82 metres long but was continuously stretched up to the series 51 until it was 40.72 metres. Of course, that was nothing and the Super 80 gained a further stretch out to 45.06 metres. That turned the DC-9 from a competitor to the 737 into a competitor with the Boeing 727-200, which was only 46.68 metres long.

Douglas had got itself into real financial trouble in the 1960s and the merger with McDonnell in 1967 was designed to create a stronger manufacturer in both civil and military realms. Unfortunately, the DC-10 programme was not a success for McDonnell Douglas and subsequently they were never able to find the funding required to compete one on one against Boeing. The DC-10 twin did not get made and what became the MD-80 was more an evolutionary extension of the DC-9 rather than the redesign the market wanted. Similarly, the MD-11 was not a transformative design like the A330/340 or Boeing 777.

The last new McDonnell Douglas aircraft were the MD-90 and MD-95. The former was a further stretch of the original DC-9, but now with new IAE V2500 turbofan engines. The airframe was slightly stretched once again, to take it to 46.51 metres. The MD-90 got off to a decent start with a launch order from Delta for 50 with 110 options in November 1989.

Unfortunately. the type would be dogged with technical problems. The first flight of the prototype was on February 22, 1993 and deliveries began to Delta in February 1995, but they ceased after the first 16. The aircraft suffered a series of electrical problems, some associated with the engines, which although used on the A320 under the wings were not used to being attached to the fuselage sides.

Other orders, famously that of Alaska Airlines, were lost to Boeing and MD-80 customers preferred the competing Airbus A320 or Boeing 737-800 (or even in TWA’s case the existing MD-80) to the Douglas product, which had uncharitably gained the nickname ‘Minimum Delay 90 minutes’. Once the issues had been ironed out the MD-90 proved itself a reliable performer but it really needed a new wing to help increase range and allow it to compete better in the market. In the end Delta cancelled the majority of its order and only 116 MD-90-30s were built. McDonnell Douglas was taken over by Boeing and the MD-90 was history. Somewhat ironically Delta acquired 49 second-hand MD-90s between 2009-2013 with the type having a low purchase price and only marginally inferior performance to the 737-800.

The MD-90 prototype was stored in early 1999, after the programme’s cancellation, and scrapped in the early 2000s.

Unlike its elder sibling, the MD-80, the MD-90 has had a surprisingly strong run in 1:400 scale with 29 releases. That’s good considering only 116 aircraft were built and only 16 airlines ever operated the type, even if there are still a few glaring holes in what has been produced – like Reno Air and SAS delivery colours. This mould dates from 2008 but in many ways is superior to the much newer MD-80 that Gemini rarely uses.

The shape of the nosecone is good and the nosegear positioned well. The rest of the fuselage is good but there is an unusual thickening of the underside of the fuselage between the nosegear and first belly aerial for some reason. It is only really noticeable from the side and not a major problem.

The rear of the mould is excellent with a nice tailcone (it could perhaps be a little squarer), good engines and a pleasant tail. There is a seam at the tailtop to allow the placement of the horizontal stabilisers for the T-tail but it isn’t too obvious.

This is also a cradle mount mould meaning there is also a seam around the wings, however it is so discrete you can only see it from underneath. 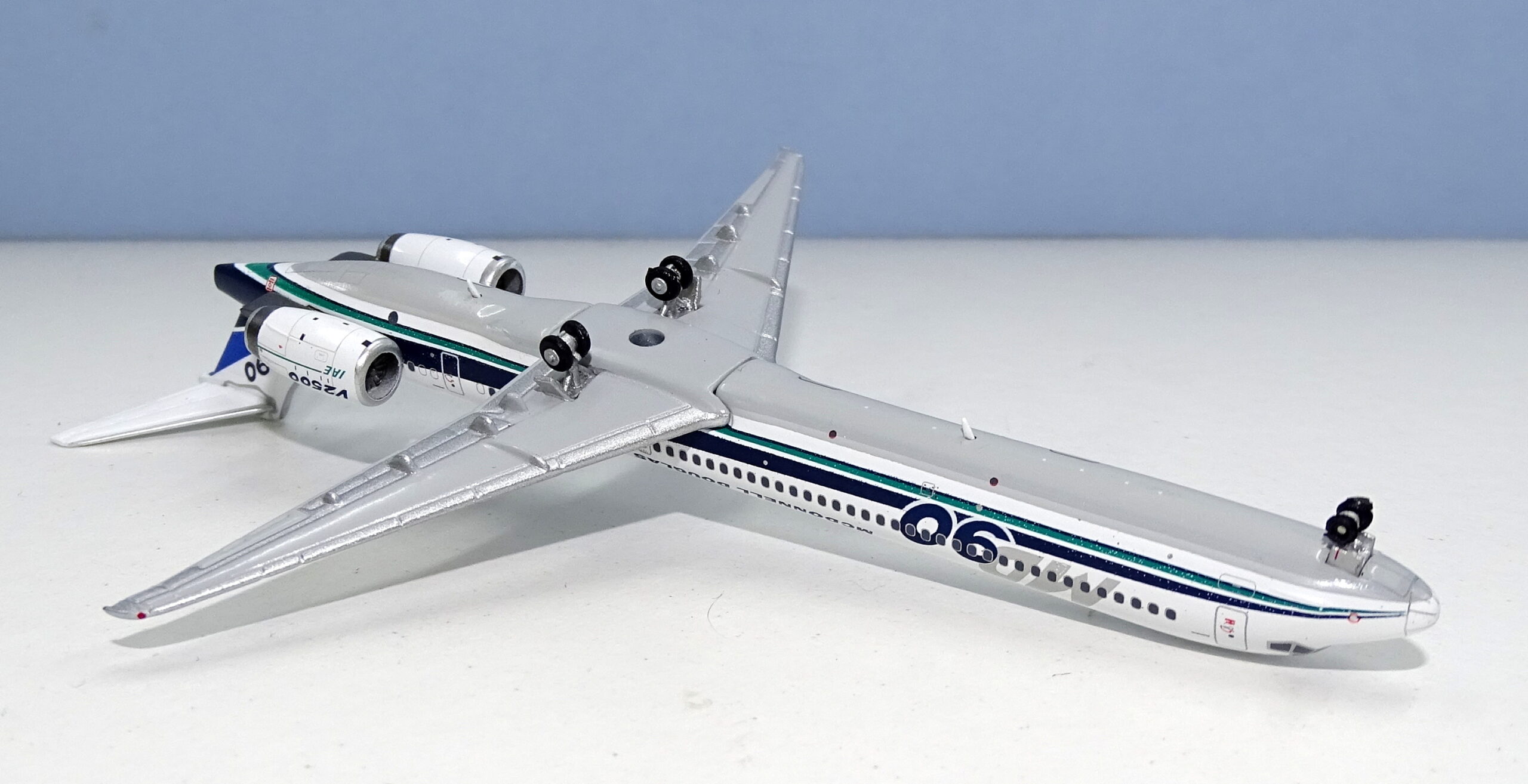 Relatively recently the mould has been fitted with antennae, which initially look too large. A look at the real thing however confirms that the antennae on the MD-90 are unusually tall and therefore those on the model are actually well sized and shaped. All three antennae are present.

Of the three MD-90 moulds that have been made this one beats both the Dragon Wings and Phoenix examples easily enough. It is the only one of the trio still in use anyway and hopefully will see continued usage.

The McDonnell Douglas house colours carried by the MD-90 have a very retro 80s look to them with the triangular arrow from the tail to the nosecone. The primary color is a deep blue, for the main arrow line, underscored by a thinner dark green line, with lower blue trim. The tail has a lighter blue triangle with the MD-90 titles above it in dark blue. The main MD on the fuselage is light grey.

The colours of the model look accurate and the shape and placement of the main elements is good. There are no issues with the font of the fuselage or tail titles. The dark blue V2500 and green IAE legends on the engines are arguably too thin and small but only by a very small margin and not enough to knock off an entire point in my opinion.

The light grey belly finishes off a near perfect rendition of the scheme for me.

Printing quality is superb and there are no faults with the reproduction. The grey belly slightly masks some of the underside detail, like the rear airstairs, but it is present if you look close. Great detailing is to be found on the nosecone and engines, with fine panel lines. Painting is equally good but I did notice that from behind the starboard engine exhaust hasn’t got the same paint detailing as the port engine.

The model is built and put together well aside from a single tyre tab on the starboard tyre of the nosegear.

It was quite a wait for this model, but a worthwhile one as the finished result is really very good. I like the casting and JC Wings continue to show that they can compete effectively against new competitors in terms of livery reproduction and detailing.