The HS 748 is the sort of smaller type that is approaching the size threshold, in 1:400, beyond which models become a little unworkable. Given that, and the fact that it was largely sold to smaller airlines, few of which were American, and it is surprising that there are actually two available moulds in this scale compared to none for types like the Martin 404. It is of course exactly the sort of aircraft that delights me as a collector, especially when a rare G-reg independent airline model is made.

The Hawker Siddeley 748, originally the Avro 748, was one of many aircraft designed in the 1950s and 60s as a Douglas DC-3 replacement. Compared to competing types such as the Nord 262, Handley page Herald and NAMC YS-11 the 748 was a major success. 380 were built over a 27-year production period, which compares quite well with its biggest competitor, the Fokker F27 / Fairchild F-27, which had sales of 586 over a 32-year production run. The Fokker product was assisted by being available in 1958, rather than 1962, and getting licence production in the almost closed US market.

The raison d’etre of the HS 748 was that it was designed for operations from primitive airfields, that were commonplace throughout the world at the time. The HS 748 was rugged, simple to operate, reliable and had excellent STOL capabilities. This drove sales in locations as far removed as Argentina, the Caribbean, India, Chile and the Philippines. That doesn’t mean that the type didn’t also find worthwhile service within the UK though, and the launch customer was in fact Skyways who used them on its Coach-Air routes to Europe from London (Lympne).

The British independent airline Dan Air Services grew strongly during the 1960s and became well known as an IT charter operator, especially with its Comet 4s, as well as for its major presence from Berlin Tegel. It had however, also operated scheduled routes since 1956 and by the time it tookover Skyways, and its HS 748s, in 1972 it had a sizeable operation. The HS 748 fleet would be expanded during the 1970s with second-hand examples from Argentina, Colombia, the Philippines, Fiji and the Bahamas.

Even when BAC One-Elevens replaced the HS 748s on longer scheduled routes the Budgies continued to form the core of the thinner domestic and international scheduled services, as well as from 1984 the Berlin-Saarbrucken route as part of the Internal German Services network. HS 748s also flew between Berlin and Amsterdam, were active on oil charter operations and supplemented British Airways Budgies on Highlands and Islands routes.

Dan Air operated 20 HS 748s and the type remained important, despite the introduction of BAE 146s, up until the airline was taken over by British Airways. G-AZSU was a series 2a aircraft, the most successful variant, built and delivered to Bahamas Airways in 1967. She joined Dan Air in April 1972. Five years later, on January 10, 1977 she overran the runway at Sumburgh in the Shetlands, which collapsed the nosegear, but she was soon repaired. In 1981/82 she was leased to British Airways and on her return, she remained in service until June 1, 1990. Subsequently she was operated by Air Botswana, Aberdeen Airways and Air Provence International. As F-GPDC, she was finally withdrawn from use in 2003 at Marseille and scrapped the next year. 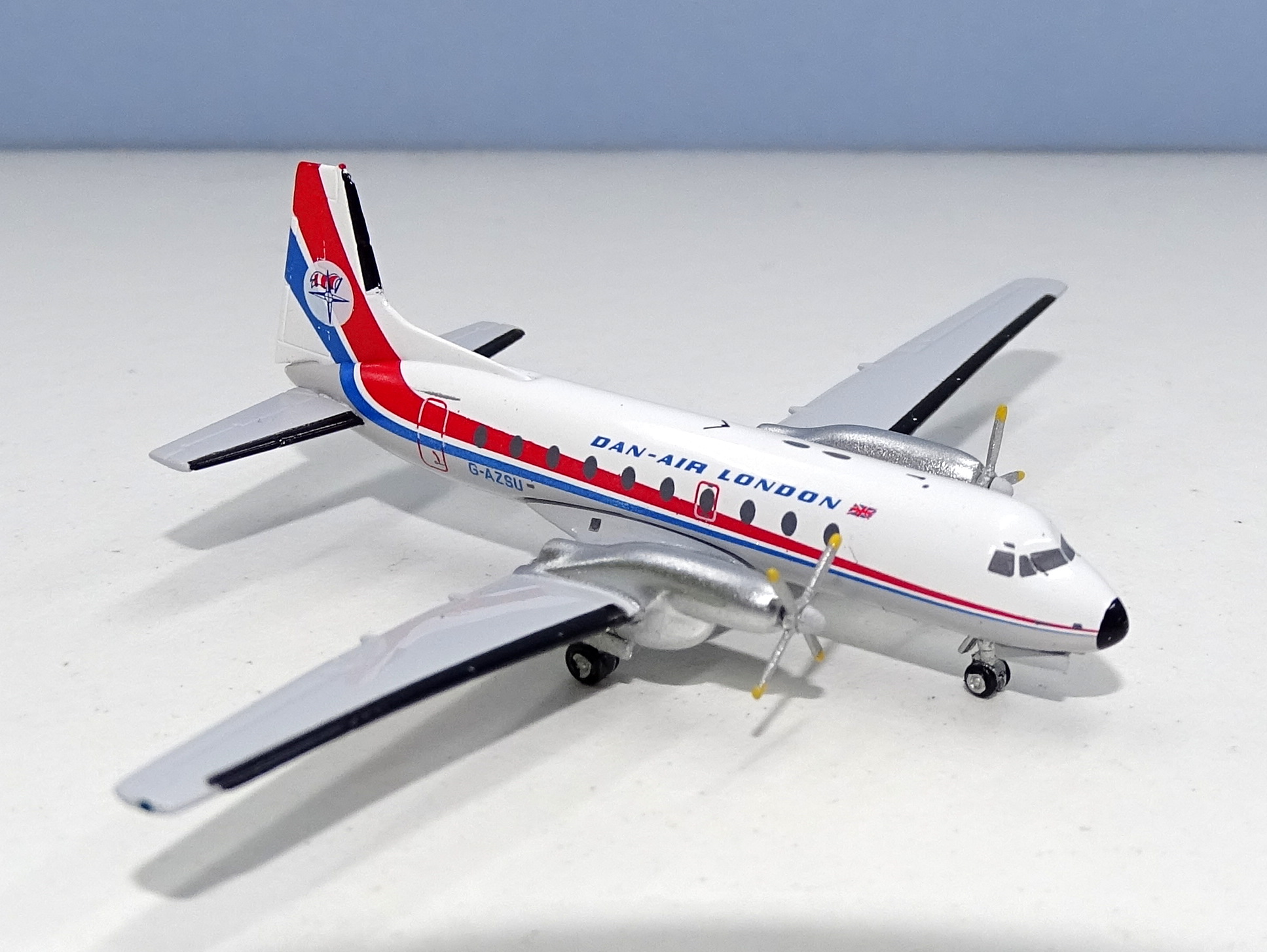 The two existing HS 748 moulds are from Aeroclassics and JC Wings / Gemini Jets and they were oddly both produced in 2009. They both share an amazing resemblance to each other, which pleasingly is because they also both share a strong resemblance to an HS 748! It is in fact a little difficult to tell the two moulds apart.

The overall shape of the nose and fuselage is accurate and well reproduced. I can’t fault the wing shape or stabilisers either. The wings attach to the fuselage as a cradle mount but the seamline follows the wing fairing edge, in exactly the same way as on the JC mould, and it looks good. Comparing the wings to the JC Wings mould and the Aeroclassics has less detailing on the flaps. This is about the only way to easily distinguish the two aside from the undercarriage. 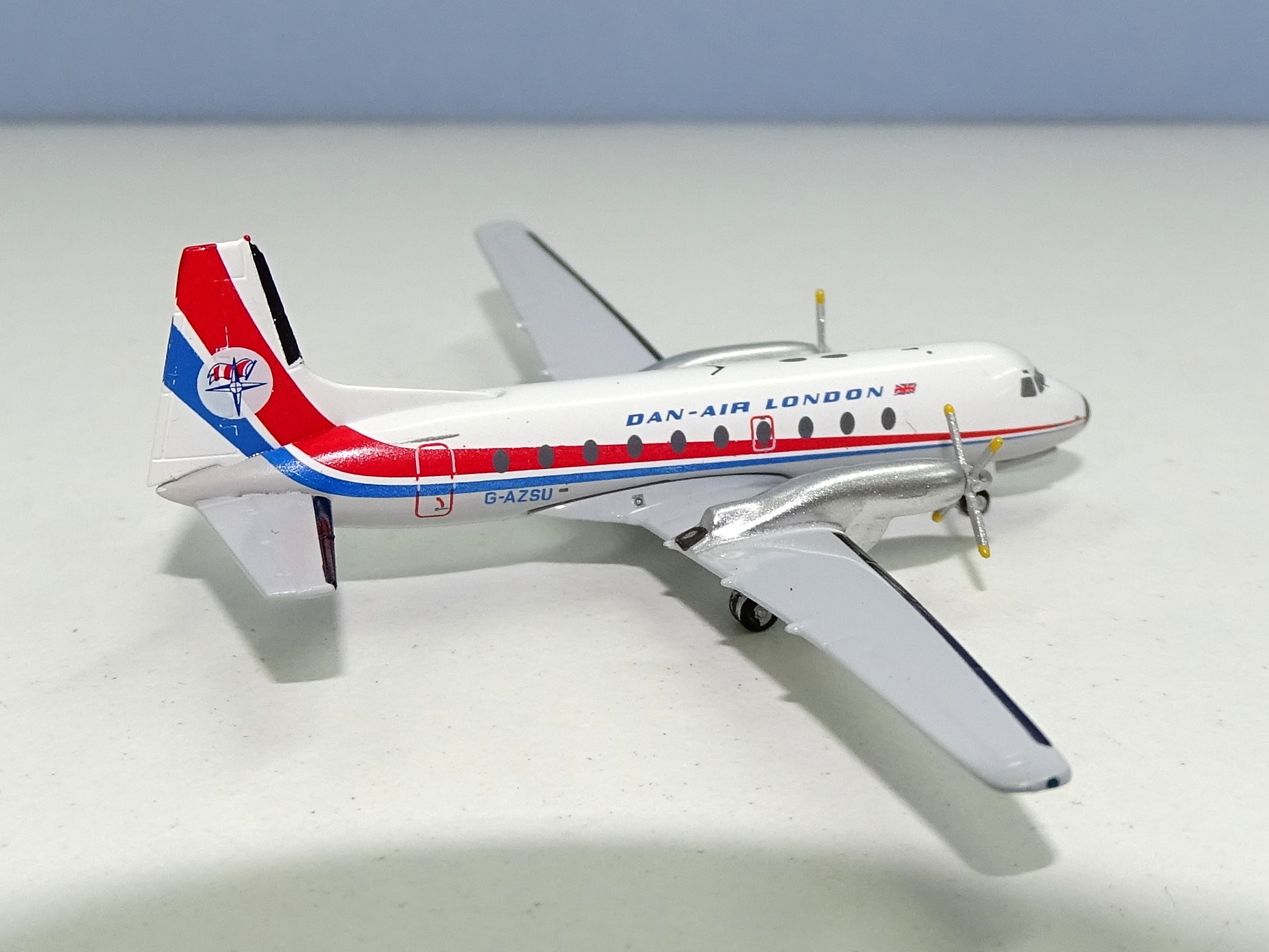 The undercarriage on the Aeroclassics mould is well sized and placed but is static unlike the JC Wings mould. The tyres are also plastic and directly connected to the gear leg. There is no separate rubber tyre as on the JC version. With such a small model the tyres rolling or not is not an important factor to me at all, however as we’ll see later it does introduce a new issue. 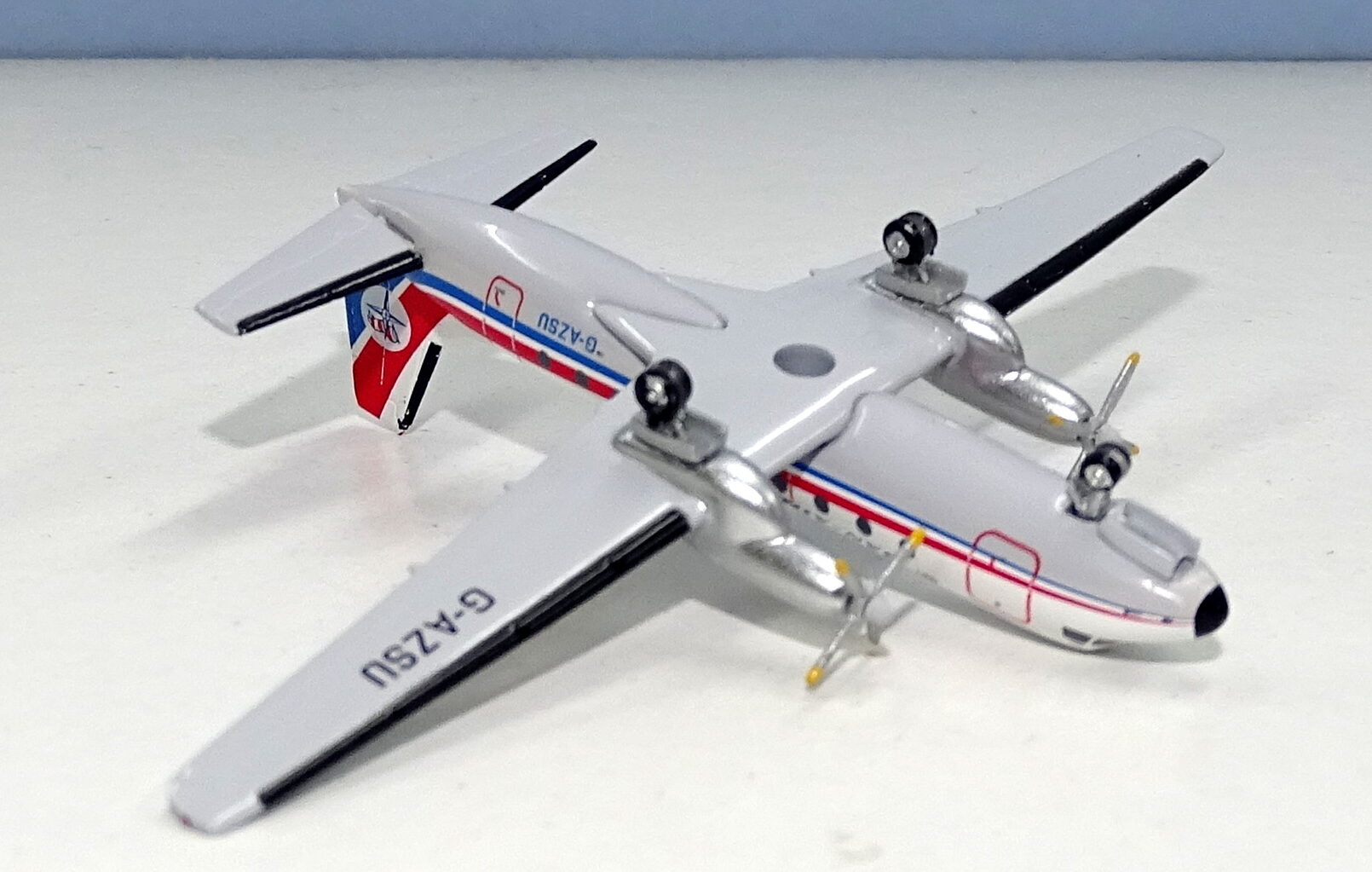 The engines, which are one piece and connected directly to the wing, are very attractively done. The model does not feature any of the three aerials of the real thing, which is more than forgivable at this scale. 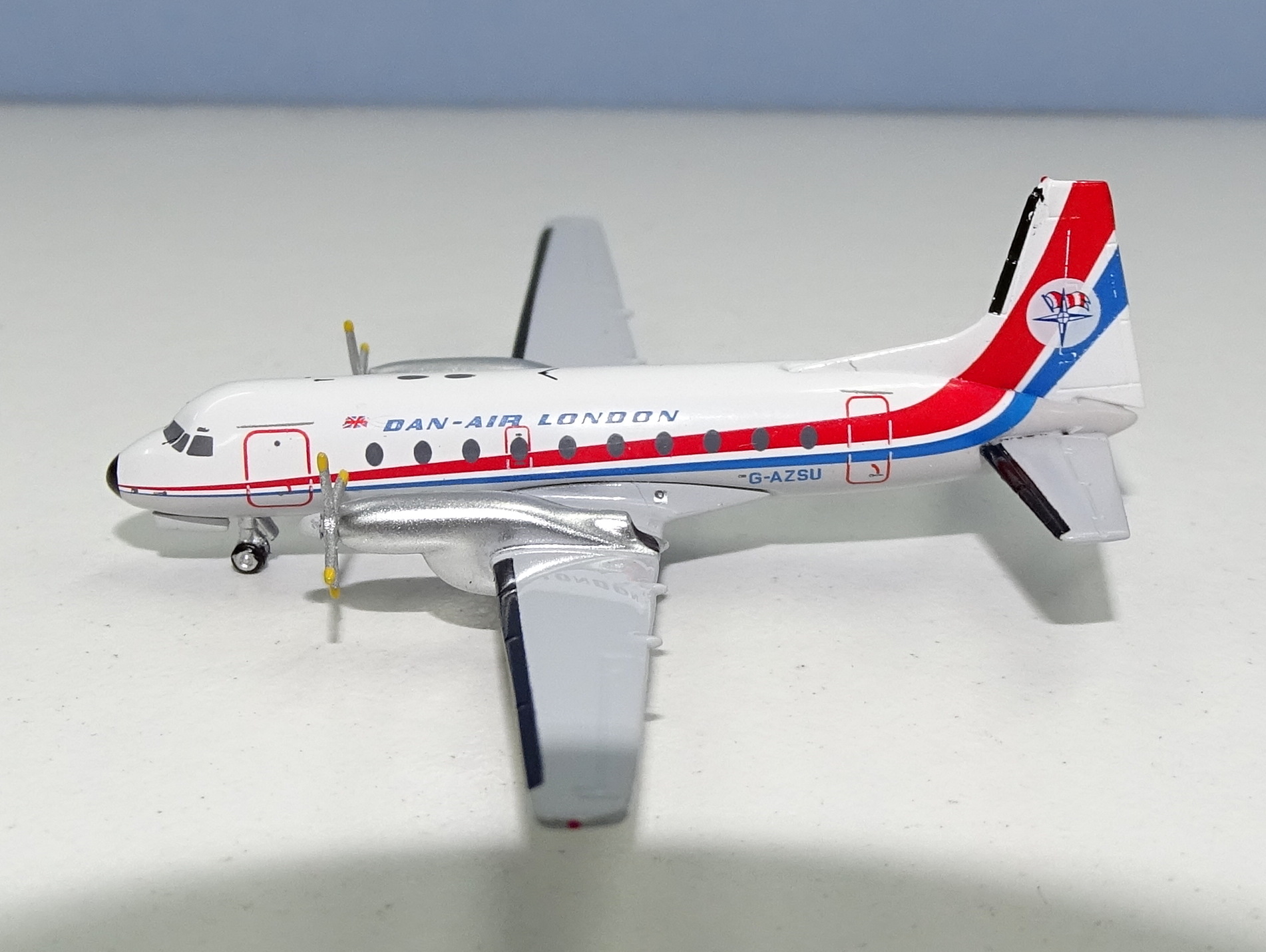 It is a pleasure to see that the level of accuracy on such a small mould is achievable, indeed the other moulds in this size range (Saab 340, ATR-42 etc) are also very nice. The one improvement the Aeroclassics version has over the JC Wings version is that unlike its competitor mould it is not a compulsive tail-sitter.

Dan Air’s attractive red, white and blue scheme of the 1980s was a major improvement on the red and black versions that came earlier. There are actually three variations on the scheme: one with longer titles (between 6 and 7 windows wide) and no black cockpit anti-glare and the other later version with the anti-glare and Dan Air London titles that are less than 6 windows wide.  There is also a variant of the earlier scheme with a normal hyphen in the titles and one with the later little aeroplane hyphen. This model wears the earliest variant. 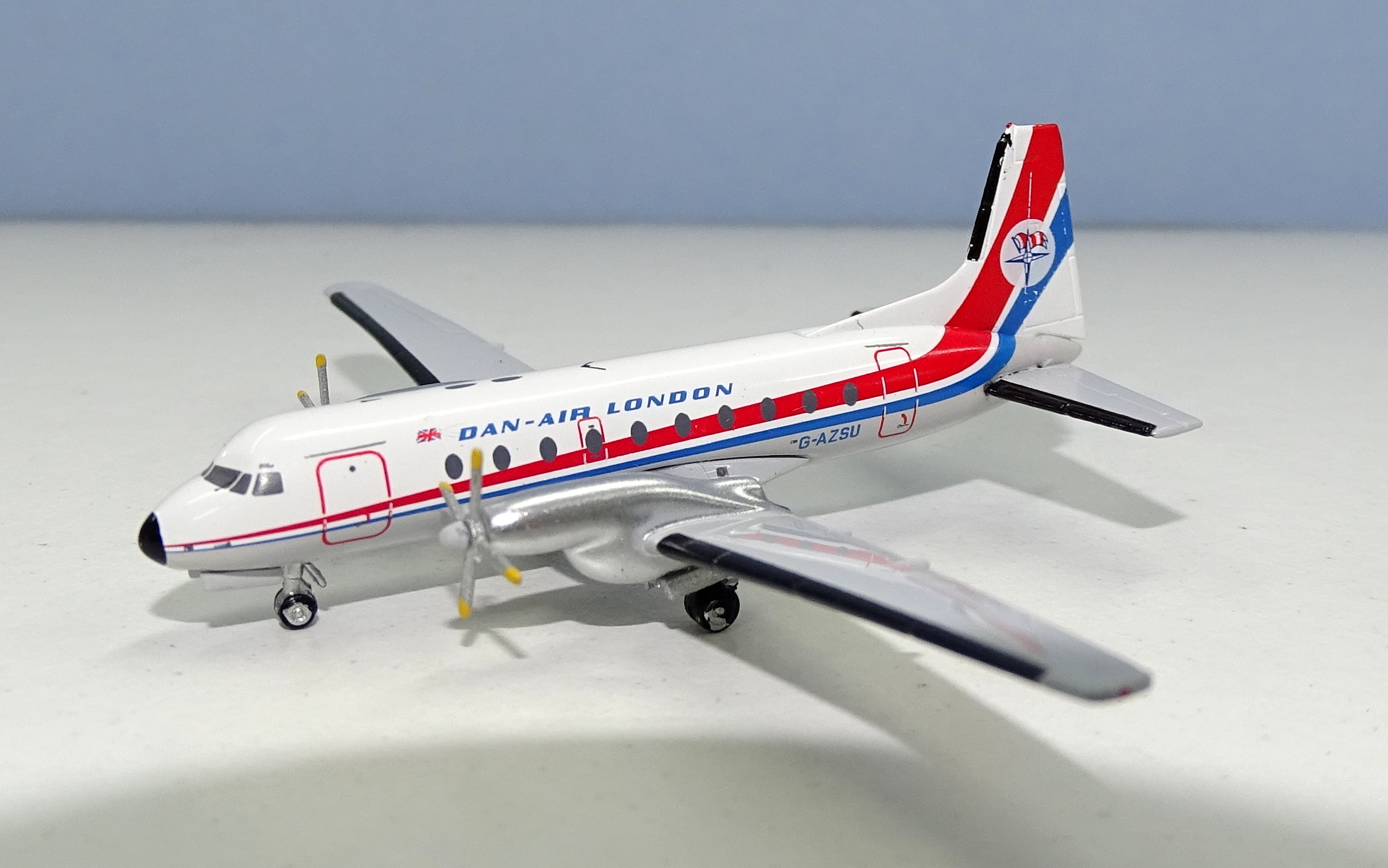 The placement of the sweeping blue and red speed stripes, that arc up onto the tail, is precise, although the blue colour used is too light. The placement of the tail logo is less accurate. In photos of G-AZSU in either of the scheme variants I mention above the Davies and Newman logo should be higher on the tail. On the earlier schemes the East/West compass point should be highest but on all variants it ought to be above the black on the tail anterior surface. 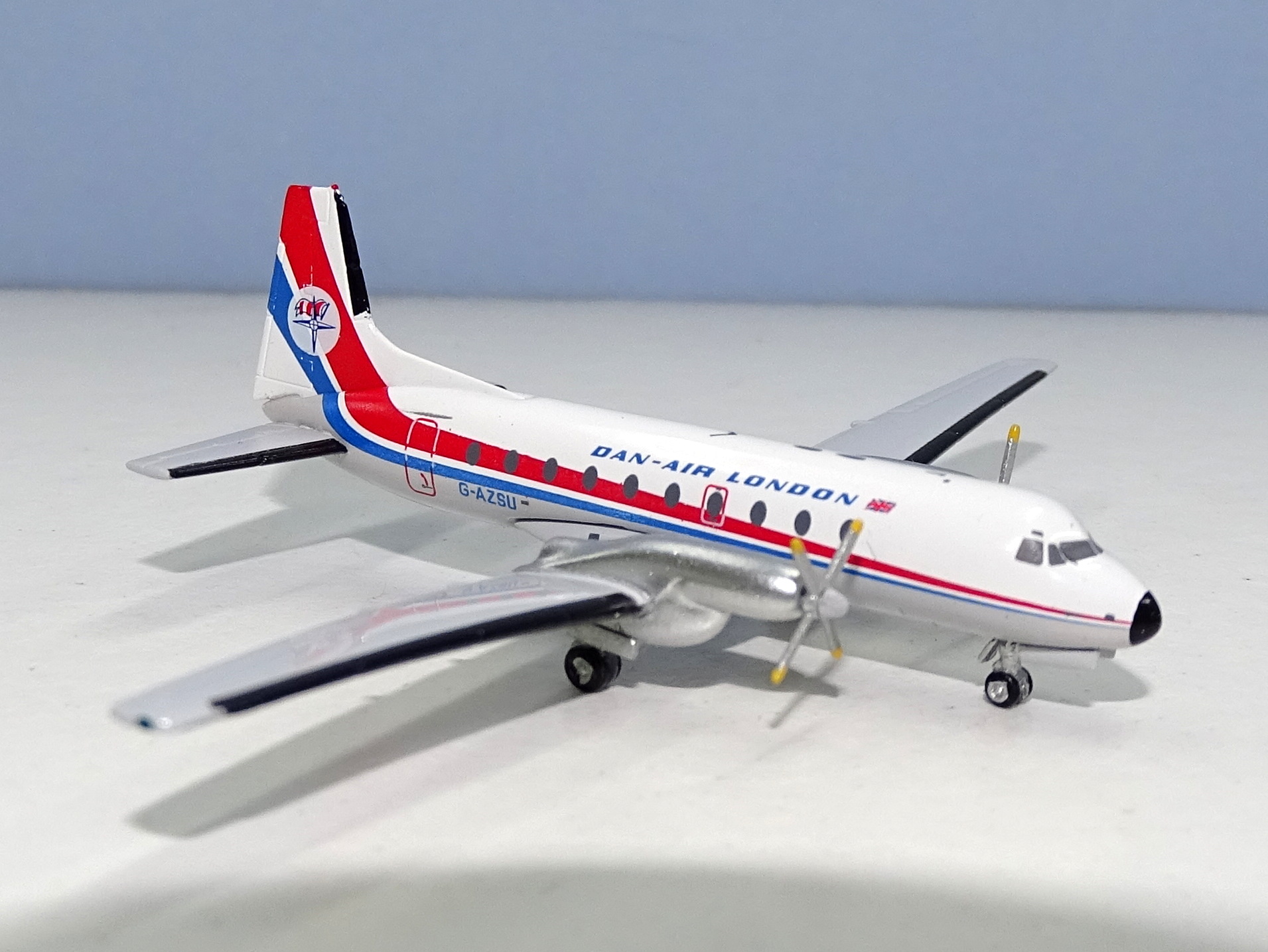 The main titles are well sized and the font is correct. The hyphen between the DAN and AIR is the simple type, which I initially thought was an error but is actually accurate for a period in the early 80s.

The registration is correctly printed in blue on the fuselage but the corresponding SU is missing on the nosegear doors. Another error is on the lower side of the vertical stabilizer. The delta shaped area under the blue stripe should be the same light grey as the belly not the white it is.

As is fairly common nowadays Aeroclassics has done a decent but not spectacular job on the livery application here. The model is so small that some of the errors are easy to ignore but they are there nonetheless and should not be.

There are definitely positives in the printing of this model, but then there are also negatives too. On the positive side the aerials are all printed on the roof centerline and the tips of the props are correctly yellow. On the negative there are several points.

Firstly, the overprinting of the tail logo roundel on the striping underneath is not a success. You should not be able to see the tail stripes underneath it at all and in fact the roundel should be exactly the same bright white as the white line between the red and blue. It is not and this is far from the first time this has been an issue with Aeroclassics (the TIA DC-10 had the same issue of white on silver last month).

Secondly the cockpit windows are not large enough. They should be taller than they are. The lack of height gives the aircraft a too heavy looking forehead. Thirdly there is no detailing whatsoever on the engines. I have a JC Wings BKS HS 748 and the printing on the engines is excellent. Here they are just silver, which is not ideal considering the engines are such a large feature on the aircraft and there are plenty of markings that can be added.

Adding insult to injury is that Aeroclassics simply cannot manage the skill required to paint the tyres on the undercarriage, which they have to do because they are not rubber (or whatever the substance used is) tyres. This means the Aeroclassics HS 748s always come with rather slapdash wheels. On this model the nosegear is unusually decent but the maingear is poor. Build quality is otherwise high.

I too often nowadays find Aeroclassics models a little frustrating. Their moulds, and heart, are usually in the right place but the skills to produce top quality finishes at the factory are clearly lacking. The people looking at the photo evidence for the research simply don’t do their jobs properly, and often fail to use a wide enough range of imagery or have any common sense. Then the factory workers themselves are slapdash. This isn’t always the case but too often I find out that a model I initially rate highly has the points fall off rapidly when I take a closer look. No doubt AC would say I should stop looking so closely, but when the prices go up, like they have just done, people should clearly be getting something better than a 23/30.

Made in China: China Northern McDonnell Douglas MD-90 B-2103 by JC Wings

Skywings have been making interesting and often historic Chinese airliners for a while now and have expanded their reach to use JC Wings moulds as well as those of Panda Models. Interestingly some of the […]