Recently there has been a major uptick in the number of new moulds being introduced in 1:400 scale, which I hope illustrates the good health of the industry and the hearty result of increased competition now that NG Models is on the scene. A few months back I was involved in a closed group discussion about what new moulds would be worthwhile and I was surprised how many votes the 767-200 got considering that there have been several decent moulds already. It was soon after that I learnt there would be a new 767-200 mould coming to the market and this October it arrived, albeit with some confusion about who is behind it. The answer to that is fairly obvious but I’m not here to talk about that aspect, I want to see whether it is worth the energy spent on it.

The Boeing 767 was launched on July 14, 1978 when United Airlines placed an order for 30 of the series 200 and was swiftly followed by 60 further orders from American, Delta and TWA. In the end the smaller series 100 would never be built as it too closely matched the partner program 757’s seating capacity. In fact, these two models (757 and 767) started the annoying trend of leap-frogging the -100 designation that has partly led to the marketing naming nonsense that sees us with 787-8s and -9s.

Regardless of the initial 90 aircraft only ten were destined for Trans World Airlines. This was not due to a lack of need – TWA had a large fleet of elderly 707s (including lots of series 100s) and really didn’t need as many Tristars and 747s as it operated either. The 767 would have been the perfect size allowing a nice upscaling of the 707s but a lower capacity than the three engine Tristars whilst also having the range (in the ER version) to cover the Atlantic.

Unfortunately, even in the early 1980s TWA was rather short of cash having struggled through the 1970s oil crisis with much difficulty. The early 80s didn’t improve dramatically with the beginning of deregulation, which TWA never really had a good plan to manage, the PATCO strike and an economic downturn. TWA had to settle for what it could afford, which was a handful of 767s and MD-80s. Ten further 767 options were never exercised presumably for financial reasons.

The first TWA 767 joined the fleet in November 1982. At least with the advent of ETOPS certification, enabling long-range twin-engine over water flights, TWA was able to convert its 767-200 orders into 200ERs and find a useful niche for the type operating long thin transatlantic routes. In fact, it was a TWA 767 that initiated the first 120-minute ETOPS route (meaning the aircraft could be up to two hours from a diversionary airport in case of emergency) on February 1st between Boston and Paris.

Subsequently Boeing got all 767ERs up to 180-minute ETOPS. TWA’s small 767 fleet could be regularly seen flying services like Boston-Paris, St Louis to Frankfurt and St Louis to London Gatwick. The 767 did very well on ETOPS routes and by 1991 more passengers flew across the Atlantic in a 767 then on a 3 or 4 engined aircraft.

N608TW was one of three of the fleet that was sold to GECAS in late 1999 and joined the cargo carrier ABX Air soon afterwards following freighter conversion. She flew with them, as N708AX, for a decade when she became part of the DHL fleet and is currently operated by Atlas Air as N652GT.

I have reviewed the older 767-200 moulds previously and in summary several of them are pretty decent. In fact, the old Dragon mould and the original Gemini Jets 767-200s still stand up well today whilst the latter has been updated by JC Wings. Nonetheless the mould rarely gets any usage so a new 767-200 is certainly welcome. This new 767-200 show plenty of promise but also at the same time doesn’t necessarily appear to be the finished article it might have been. 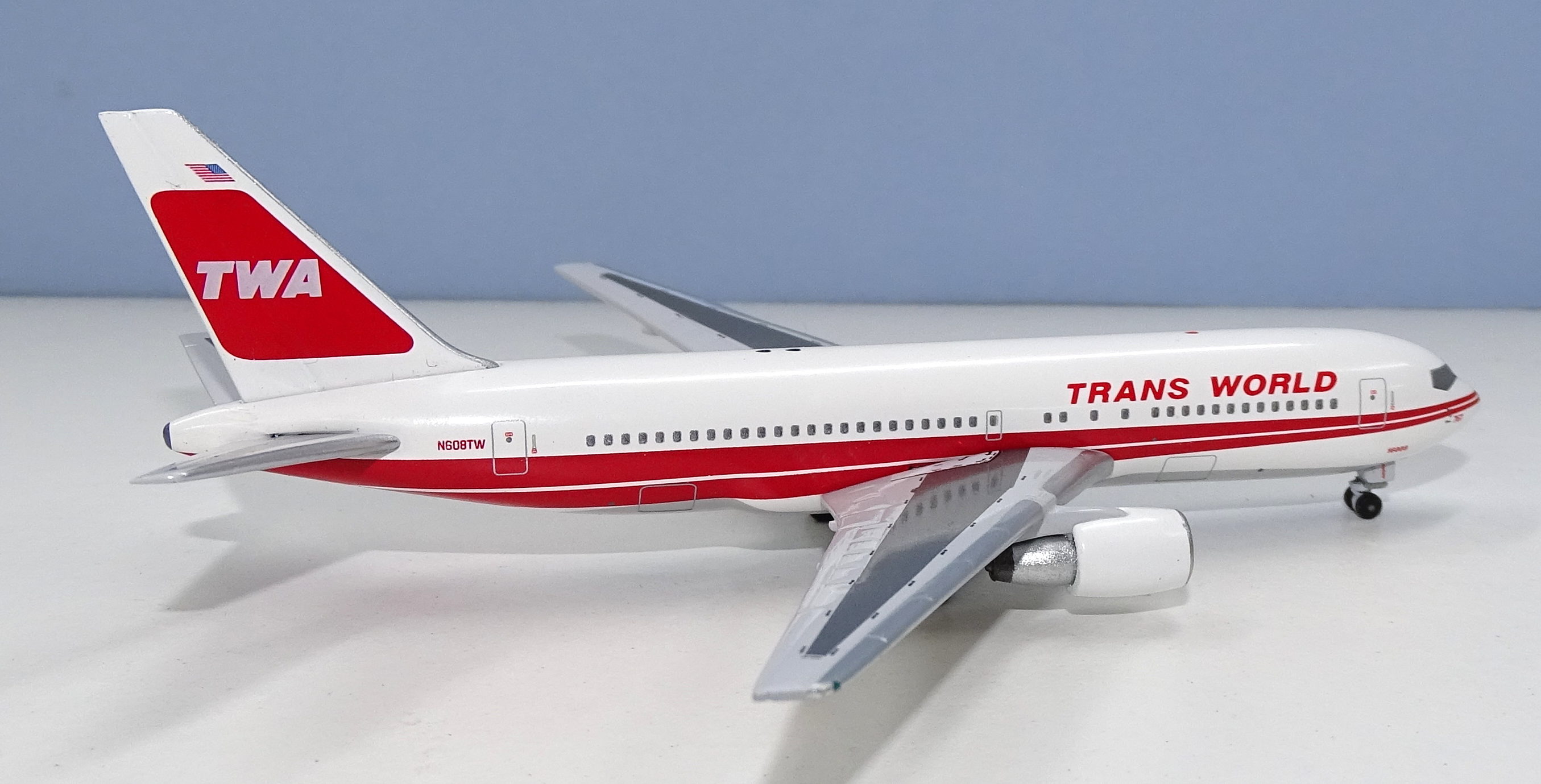 The fuselage is sound, in fact it is very good. The nose shape is excellent and the fuselage is seamless. The latter point enables an accurate and well detailed wing/fuselage join that is superior to that of the Gemini mould. The tail and tailcone are also spot on.

The wings are nicely shaped and have accurate flap track fairings, which protrude the correct distance behind the wing rear edge – again an improvement over the Gemini mould. The engines have a good shape, albeit the main nacelle is perhaps a little too long.

If there are two features, which clearly give away this mould’s heritage it is the absence of aerials (there ought to be 1 on the topside and 3 underneath). It is unfortunate they are missing but there’s no point crying over spilt milk so I’ll move on.

The other defining feature is the undercarriage. The tyres are simple rings on a metal pole, the kind that only one manufacturer makes. What has been more concerning is the slight nose-down attitude of the whole aircraft that appeared in the retailer photos. I can report there is a very small nose-down attitude but not enough to be a real issue. Still the nosegear is perhaps a little short. I have been told that there will be new undercarriage for this mould on the next batch of releases. 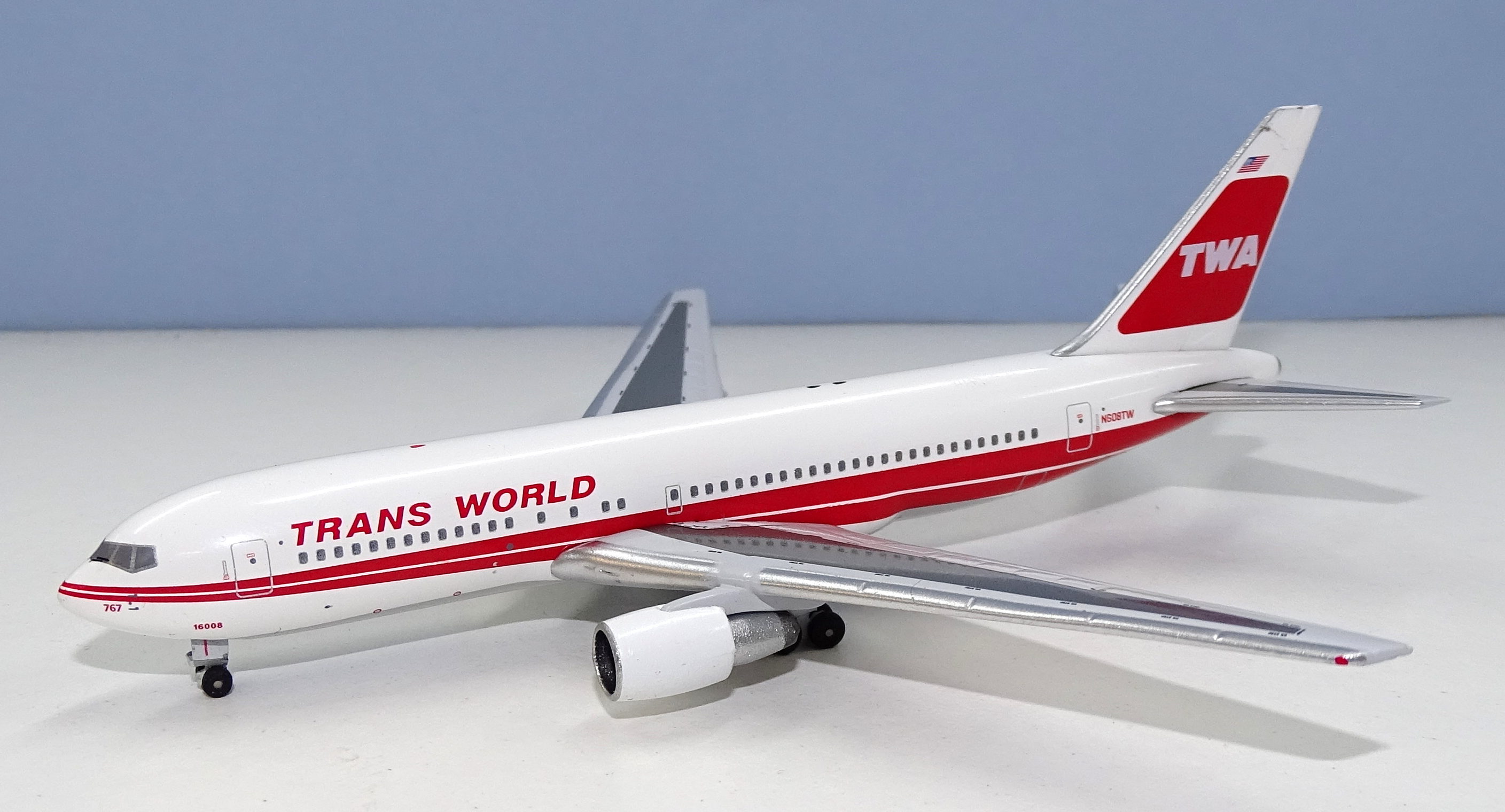 Even with some minor undercarriage issues the gears are still decent. The tyres are well sized and the maingear itself nicely detailed with dual inner struts. This is a good mould but could do with the mods to the landing gear and, ahem, aerials.

The twin-stripe scheme is a classic that was perhaps TWA’s best ever livery. It was surprisingly simple but made good use of the airframe and looked excellent on the 767-200, which had just the right length to carry it off to perfection. Later on the 767s would acquire engine striping but this model represents the delivery scheme so the engines are plain white.

The TWA red is accurate and the red fuselage striping good enough, although not perfect. I think the lower red stripe at the rear isn’t quite wide enough, but it’s a small complaint. The fuselage titles are fine and small details like the 767 text and fleet number are present on the nose.

There are two areas that are however quite poor – the tail and the belly. First the tail, which would be fine except for the TWA inside the red square. Far too often of recent tail elements have not been straight from this producer and once again the TWA simply isn’t level. Worse it is almost grey in colour – a result seemingly of printing it over the red beneath.

The belly is also rubbish. The grey underbelly should appear as a straight line from the side, one which never meets the red striping. Instead the line is all over the place. It moves upwards from the initial correct placement at the nosegear, slips down under the wing and then leaps up again meeting the red stripe, and then slopes downwards. It isn’t nearly correct.

Essentially the livery is correct on this model, however it has been so poorly applied that it looks wrong in two key places. I could moan about this in the printing section but it has a quite major impact on the scheme’s representation.

Printing on this model is ok but also somewhat lacking. The passenger entry doors are too short. They should be higher at their upper margin than the cockpit windows and they are not. On the underside the model also lacks any printing of the main undercarriage doors.

Of the painting the engine second portion is bright silver for too much of its length and the paint on the wings is rather thickly applied. This rather obscures the detailing of the wing flaps and is especially visible on the underside port wing when compared to the starboard.

The model did also come with what looked like a scratch on the portside tail top, but I’m happy to report that with some rubbing this mark came off. In the end build quality of the model is fine but the printing and painting is just middle of the road.

A TWA twin-stripe 767-200 has been one of the most obvious missing models in 1:400 scale forever (I know Gemini made a sample but it never got into production). It is certainly a fitting aircraft to debut the new 767-200 mould on and this is far from a bad model. Having said that it is also not the resounding success that it could have been. The culprit is not the mould itself, or the research, but the rather sloppy way that the model has been printed and painted. That is a shame and I hope that future 767s will avoid some of the issues this TWA (and the accompanying Delta’s) have had. If so they should easily get a better score than the just acceptable one this model has got.

Gemini Jets has announced its September lineup of 18 new diecast model aircraft releases. This month brings several new models which will certainly be popular. Highlights for the 1:400 scale releases include the release of […]