Hawaiian Airlines has a strong corporate relationship with Gemini Jets and there is rarely a month that seems to go by without there being some kind of release of a Hawaiian model from GJ, which is impressive considering their fleet only has three types of aircraft in it. This isn’t really criticism; after all why look a gift horse in the mouth and now Hawaiian has refreshed its livery there is plenty of scope for more models from the 50th state.

Hawaiian survived a tumultuous 1990s and has benefitted from the failure of its longtime competitor Aloha Airlines to rise to dominance in the Hawaiian domestic market. Not only that it has also expanded aggressively internationally and serves 11 destinations including my adopted hometown of Auckland, New Zealand. The fleet currently stands at 23 A330s, 20 717s and 8 767-300ERs with an order for 18 A321NEOs likely to signal a new chapter for the airline.

The Pualani figure has been worn by Hawaiian’s fleet since October 1973 and has become an iconic component of Hawaii let alone Hawaiian Airlines. The look of the lady inside the flower has changed in detail several times, most notably in 2001 and for the new 2017 edition the lady stays the same. The new livery was unveiled on May 1, 2017 and Hawaiian has gone into overdrive to advertise it. They say:

“Our new livery embodies a stronger, more contemporary representation of Hawaiian Airlines’ culture of service and hospitality, which is the bedrock of our guest experience,”

Of course they would say that ;). The new livery is really more of a brand refresh rather than a full new livery a la Air France and I suspect many people will be wandering what the fuss is about. It was designed with a ‘global creative consultancy’ called Lippincott and apparently took a year. Read more about the refresh here:

Gemini Jets obviously had prior warning of the new livery and seem to have accidentally let the cat out of the bag when they announced their April releases by showing the livery ahead of its announcement! The photos were quickly redacted but this prior knowledge obviously meant the models appeared on cue for the official release of the livery. In fact model has in this case appeared ahead of the aircraft as there is actually no N361HA in the Hawaiian fleet!

The livery was released on a Boeing 717 (N488HA) and you can only assume that Gemini were told that the next new A330 in the Hawaiian fleet will be registered N361HA. Certainly their previous A330 was N360HA so it fits the sequence. What is perhaps more interesting is whether the aircraft name is correct upon delivery. The model has the name ‘Hoku Mau’ on it, which means as I understand it ‘constant star’. 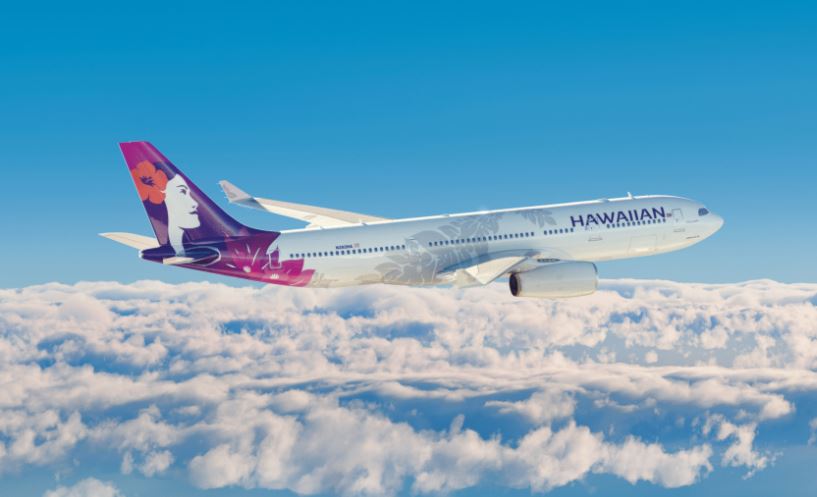 Suffice to say they are all satisfactory but also all suffer from failings of some sort. Overall I find the JC Wings / Gemini Jets A330 to be the weakest of the four currently available moulds but that doesn’t mean it is a bad moulding. Gemini Jets have used this mould since December 2015 and it seems that now the well publicised wing angle issues have been resolved. That is a good thing as with the crazy wings the mould is a non-starter.

The good points for the mould are the overall shape of the fuselage, wings and engines and especially the underbody detailing. The bad points are mainly related to the undercarriage. The nosegear is slightly too far back, although the angle of the gear leg minimizes the issue it is noticeable. More annoying for me is that the gear is also a little too short. On the longer bodied types using this mould (A330/340-300) this has less of an impact, however on the A330-200 the shortness of the fuselage means that the model exhibits a slight but noticeable nose high attitude. This is unfortunate especially since the A330 exhibits a nose down attitude to the extent the freighter version required an extra blister to make the floor level!

Another specific criticism of this release is that the medium sized dome just behind the forward aerial is missing from the model and merely outlined. Given its size I would expect it to be present in relief.

I have previously given this mould an 8 but that was for the longer versions. I can’t help but knock an extra point off for the series 200 and where there is competition I would always select this mould last out of the 4 currently available.

The 2001 Hawaiian Airlines livery was a classy and stylish update to the Pualani, which had been looking a bit tired. It did however introduce a eurowhite style scheme and it is this that the 2017 revision has seeked to reduce. I don’t think I can talk to the changes any better than Hawaiian themselves so here is what they have to say:

“The new identity retains Hawaiian’s distinctive color palette of purple, fuchsia and coral. Pualani—the singular icon of the brand—remains at its core. The new logo and livery emphasize Pualani by featuring her more prominently and liberating her from the floral “holding shape” of the former logo. She gazes proudly with the wind in her hair, adorned with a hibiscus flower and framed by a Hawaiian sunrise. The expressive, organic graphics reflect the natural forms of Hawai‘i.

The addition of the lei elements to the livery accentuate the three-dimensional contours of the aircraft fuselage while also incorporating a rich, meaningful cultural narrative that reflects the carrier’s strong sense of place and identity. Updated typography and bright, emotive imagery support Hawaiian’s positioning as a premium leisure airline, focused on warm hospitable service.”

From what I can see no Hawaiian A330 has yet been painted into the new scheme and the visuals from Hawaiian’s material appear to be faked up images. Nevertheless you’d expect Gemini to get the scheme spot on since they no doubt had access to the official designs and colours. At the moment I can only compare the Gemini result with the 717 which has been painted and the images Hawaiian have provided which show an A330.

The results of my comparison are a little puzzling. The colours all seem broadly ok compared to the Hawaiian Airlines released renderings, however their positional usage does not. The biggest three petals on the rear fuselage are actually different colours on the model but are all purple on the rendering. Plus the gradation from purple to fuchsia is a lot more gentle with purple moving up to the girl’s forehead on the imagery. On the model the purple fades to fuchsia near the girl’s nose. Given that Hawaiian say ‘we are featuring purple more prominently in our color palette’ and on the new logo the purple goes up to the forehead I suspect this is a mistake, and not a small one. The Boeing 717 that has been painted seems to corroborate this and comparing the Gemini rendition of that with the real thing the model is inaccurate.

Another issue is the location of the Pualani girl. On the Hawaiian renderings she appears smaller with a lot more neck on the tail. Unfortunately the 717 isn’t a lot of help here so we’ll just have to see what happens but certainly the model doesn’t match the artwork.

The lei wrapping around the fuselage uses a ‘shimmering mica paint’ and on the artwork appears quite feint. This isn’t the case on the model itself where it is bright and shiny, however the model’s approach seems to match what the lei looks like on the 717 so I’m willing to go with it. I’m less sure about the position of the end of the lei on the model, which looks too high above the windowline.

The titles look fine to me but one other minor nitpick is the position of the Hawaiian flag ahead of them. On the model it is in line with the windows but on the artwork it is higher.

I’m not sure how to score the livery rendition. Without seeing an A330 actually wearing the scheme how can I say it is not correct on the model? All I can do is score it against the artwork and the 717. It seems likely the tail gradation into Fuchsia is wrong, as is the petal colour in places. Whether the girl’s, lei’s and Hawaiian flag’s positions end up inaccurate I can’t know so I’ll give the benefit of the doubt to Gemini on those. Even so given their access to Hawaiian how is this not 100% perfect?

If there is one area that JC Wings and Gemini excel it is probably the fineness and detail of their printing. Yet again it is wonderful on this model and unlike Phoenix they carry this detailing across to the underside of the model too. I even think they have printed the cockpit windows the correct size on this A330, which has been a common issue with this aircraft type in the past (see my Iberia A340 review). Unfortunately the model has one paint imperfection. On the starboard side there is an area of paint missing from the outer winglet. It looks like it was perhaps rubbed off in the cradle.

Likewise the model is really well constructed. With the wings properly level it looks excellent. All the aerials are in place properly and the landing gear is free of ugly flashing or tyre tabs. The model is pretty much perfect in the quality area proving that when they feel like it JC Wings can produce the models well.

This is a really nice model, only spoiled by the possibility that if Hawaiian’s A330s match the artwork Hawaiian has provided then the rendition of the livery is not entirely accurate. We’ll have to wait and see but even with a few points deducted here the model scores well. Hopefully my concerns with the livery prove to be non-issues and if so this is a good team effort between Hawaiian, JC Wings and Gemini Jets.

The Boeing 727 was for many years the most successful jet airliner ever made and the first to reach 1,000 units. It provided the backbone of the fleets of every major US trunk airline from […]

First generation jetliners are nowadays a rare commodity in 1:400 scale from anyone aside from Aeroclassics. In fact, since Witty Wings went bankrupt in 2014 there have been no Boeing 707s from anybody else, whereas […]

Gemini Jets has announced its new model releases for June 2017. A total of 16 new aircraft will be released near the end of July! 1:200 scale release highlights include the United Airlines B727-200 “Saul […]