The 1:400 scale battlefield, like airports around the world, is dominated by a relatively small number of aircraft types nowadays and one of the most important is the Boeing 777-300ER. It must be almost a year since JC Wings new 777 mould was released but relatively few have made it onto the shelves and they have mostly been Asian. Gemini, who use the JC Wings catalogue of moulds, in fact is yet to switch over to the new mould, which is unusual and shows that there is a separation of duties at JC Wings between their own and Gemini’s output. Can the new JC 777 compete against Phoenix’s renowned mould? Let’s find out.

Nowadays China is clearly the largest sales market for new widebody aircraft as the big three continue to expand their reach, especially across the Pacific, but also as a wide range of secondary Chinese airlines branch into long haul routes. The primary equipment choice for most of the smaller airlines is the Airbus A330 or the Boeing 787, and only the largest (Air China, China Southern and China Eastern) have the need for the triple seven.

Nonetheless substantial orders from all three now mean there are 49 Boeing 777-300ERs spread amongst the big three. Air China for many years was China’s primary international airline and it continues to operate a large Boeing centric long-haul widebody fleet consisting of 9 747-8is, 10 787-9s and 20 777-39LERs. These are supported on shorter thinner services by nearly 60 A330s.

Several of Air China’s Boeing 777-300ERs have been painted into special colour schemes. On December 12, 2007 Air China had joined the Star Alliance and B-2032 was delivered in the alliance colours. Two of the later frames also wear special schemes. B-2006 has a ‘Love China’ livery and B-2047 wears a livery celebrating 50 years of Chinese-French diplomatic relations.

B-2035 wears a special scheme called ‘Smiling China’, which as Air China says:

‘Features 40 Chinese smiling, confident faces on the fuselage, the livery is meant to get across the message that China is a confident, sincere, friendly and optimistic country. The 40 faces are those of 20 recognized staff members of Air China and 20 netizens. Each of them has interesting stories to tell about China’s airline industry – they are pilots who have flown all over the world, ground handling staff who make sure that everything goes without a hitch, technicians who take good care of the aircraft and passengers who have seen the world”

Air China has obviously found a useful niche for the 77W, sadly it appears to the detriment of the 747-8I, and in January 2016 ordered a further six aircraft. Given the Chinese penchant for special schemes and using its aircraft to deliver propaganda style messaging it is highly likely that at least one of the new additions will also wear a unique livery.

JC Wings 777s have always been second best to those made by Phoenix, which was most obviously the case in terms of the mould construction – cradle mount, with accompanying seam, for JC and slot in wings, with no seam, for Phoenix. In fact this is perhaps the largest reason for the new mould being reviewed here, which of course is a more modern slot in wings effort.

Impressively this new mould has certainly been worth the effort, which is something of a relief coming after poor new moulds for Airbus A320 and A330. In fact JC seem much better at making Boeing moulds as their new 737 MAX is also very good.

All the major aerials are represented on the mould and are nicely to scale. Moving to the landing gear and it is intricately made and accurate, aside from the JC Wings standard light grey gearlegs and wheelhubs. On the underside the maingear bay doors are not just printed but also indented as part of the mould. This compares favourably to the Phoenix 777, which has no detailing on the underside at all.

One area of criticism on the Phoenix mould has been the size of the engines and their pylons, which have been thought too small for some. That is not an issue with the new JC Wings mould. The engines are larger, maybe even slightly too large, however the ground clearance is still more than adequate. I should also point out that the engines have separate fanblades allowing you to see through them (unlike the solid fan cores of the Phoenix).

My only other possible fault with the mould is the attachment point of the wings to the fuselage. The fit isn’t as tight as on the Phoenix mould and there is a noticeable gap. It’s not particularly bad but it is present.

Comparing the new JC Wings and the Phoenix 777-300ER mould is an exercise in contrasting excellence. Each has its own perfection areas whilst overall both operate to a very high standard. Is this new mould better than the Phoenix. On balance I’d say it is as good, which is no mean feat.

People may complain about the standard liveries of the Chinese majors, even more so since China Eastern’s revamp, but the plentiful special schemes surely make up for this. This is another nice example, using the same base colours as the ‘Love China’ scheme worn by sistership B-2006 i.e. a bright red matching the standard Air China tail scheme. A pair of large red chevrons occupy the fuselage (one from the roof down and one from the belly up), whilst in between are the faces of the 40 people. Large titles say ‘Smiling China’ forward under the usual airline titles.

The livery colours are simple but I think perhaps JC has gotten the red a shade too dark. Colour is not my strong suit and it maybe the lighting in the photos I’ve got of the real thing is too bright making the red seem washed out. Certainly it is not a major issue even if I am correct.

Placement of the livery elements is effectively perfect. The position of the red swooshes and titles, in comparison to doors and windows etc, are spot on. In some ways the livery is simple but the representation of the forty smiling faces is certainly not. I have got out my magnifying glass and even under that kind of scrutiny the printing stands up. The faces are clear and distinct with no gradation of stippling effect. 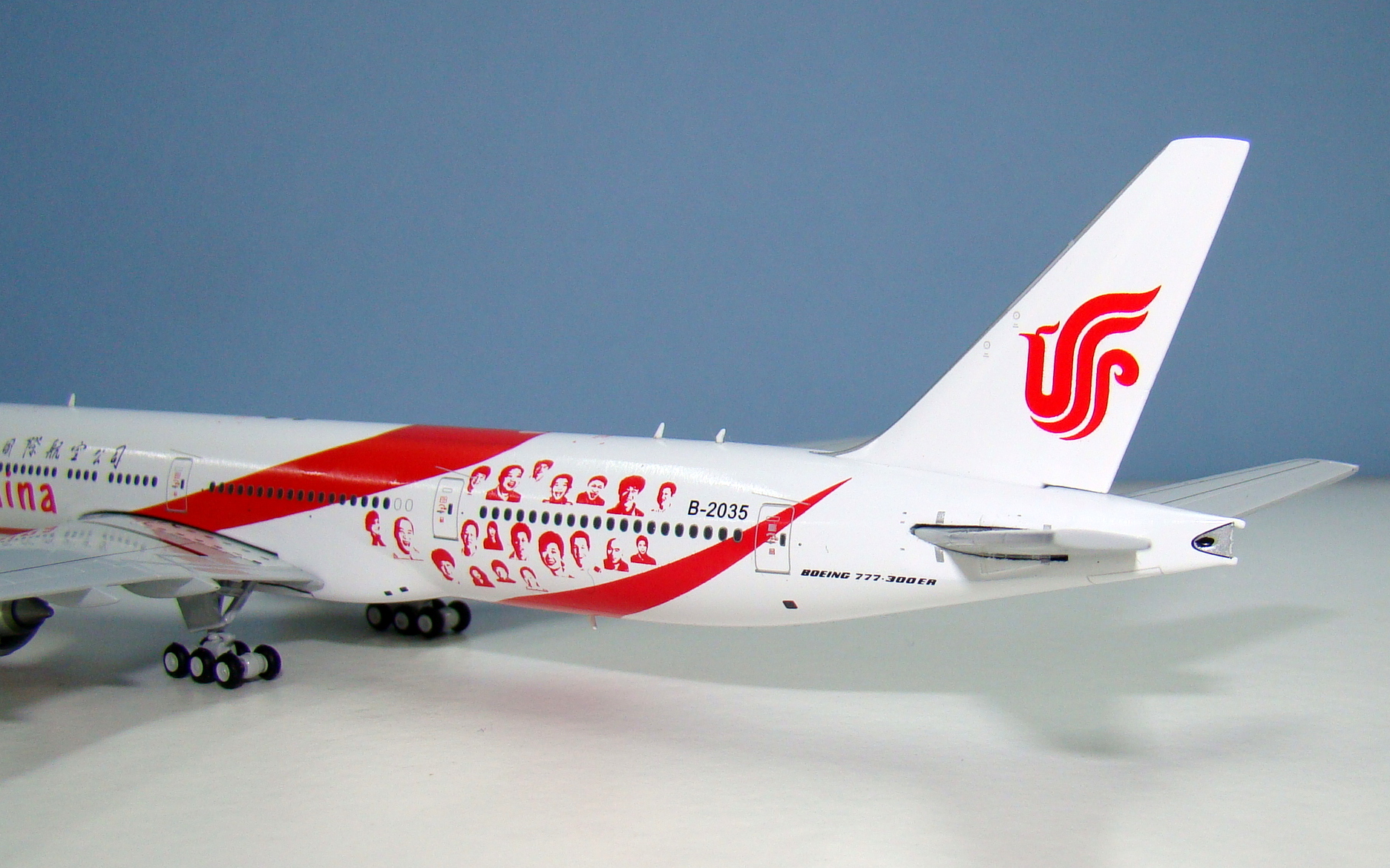 Add to that that JC Wings have successfully completed the ‘nuts and bolts’ parts of the livery (aircraft type titles, flags, Star Alliance logo) and there is really no good reason to dock any points for completion of the scheme.

Experience has shown me that JC Wings know how to do good printing, they are in fact better at it than anyone else. With that in mind it is no surprise therefore that the tampo printing on this release is superb. There are no faults at all. The cockpit windows are particularly well printed and stand out partly as Phoenix has of recent been misprinting the cockpit windows on its 777s (putting them too high).

Construction quality on this model is also very good. There are no tyre tabs or undercarriage errors. My only concern is the gap at the wing join. This may be a mould issue or just a construction issue. Here and only here does the model lose any points.

This is the standard of model that can be made in 2017 and catapults in my opinion this new 777 mould into first place amongst 777s, whilst also creating a late entrant for model of the year 2017. It is rare to see this level of quality in a release, even from a new mould, but JC Wings continues to impress with its own releases at least. It is well overdue for Gemini to switch to this new moulding and kick out some 777 re-releases. Well done to JC Wings. My one must buy Phoenix mould has now been replaced leaving Phoenix with no ‘best of type’ moulds where there is competition between manufacturers.

In the 1990s a 100 seater was a mainline aircraft, not a regional jet but nowadays this is firmly RJ territory as Embraer and Bombardier carve up the lower end of the marketplace between them […]