In the past year JC Wings have been mounting a solid challenge to Phoenix. Although their release dates are still far too fluid to be relied on the models do eventually get released and they have been expanding their mould range (including the Gemini moulds) much faster than Phoenix to include the widest range of aircraft in 1:400 scale. Accordingly they have had an A350-1000 mould available for more than a year now. With the aircraft approaching service entry and Phoenix belatedly mounting a challenge how does the JC A350-1000 stack up?

Airbus A350-900s are now steadily joining the ranks of the long haul fleets of many major long haul airlines, but the series 900 is the mid-range variant of the 2006 redesigned A350XWB and not the final version. It now appears certain that the shorter A350-800 will not be built, however the longer, and rather clumsily named, A350-1000 is being positioned as a 777-300ER killer by Airbus and is almost ready for service.

About the only good thing I can say about the name is that the three wheel each side maingear bogies at least fit the designator (i.e. 3 wheels and 3 0s), however surely if it wasn’t for the marketing inflation that has gone on around the number 8 this would be an A350-300, or perhaps an A353. Nevertheless the series 1000 is an impressive beast being nearly as long as the A340-600 but of course having only two engines. This size increase propels it into direct competition with Boeing’s excellent 777-300ER and the newer 777-8 and 777-9, however the latter pair are still under development giving the A350 a significant head start. 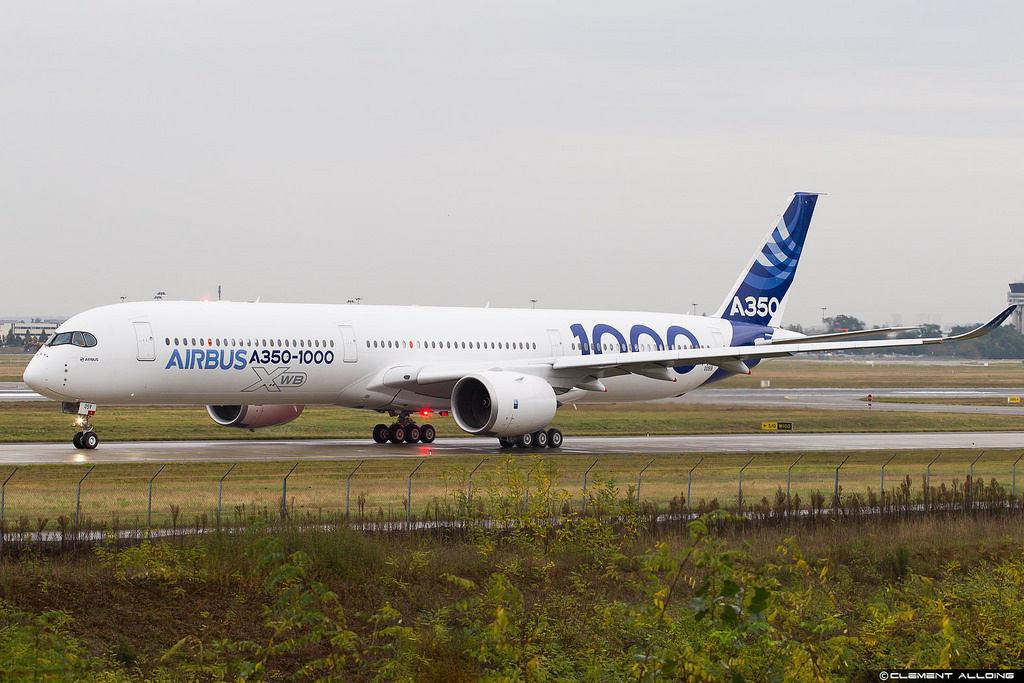 The first flight of the A350-1000 was by the prototype F-WMIL (cn 59) on November 24, 2016 and the certification programme has been plain sailing, with EASA type certification achieved within a year on November 21, 2017. Unfortunately the sales process hasn’t been quite as trouble free. The original launch customers were Cathay Pacific (26) and United Airlines (35), however both have shed orders for the variant. In September Cathay converted 6 to the smaller series 900 whilst United swapped its 35 for 45 series 900s in the same month.

Despite this there are still 169 on order with Qatar Airways expected to take its first, of 37, before the end of December. Other major customers will include Asiana, British Airways, Etihad, Japan Airlines, Latam, Virgin and possibly Iran Air. The issue for Airbus hasn’t been the aircraft itself but rather a mixture of factors.

Firstly widebody orders have rather dried up as airlines perceive a weakening future market and focus on providing lower capacity and higher frequency to maximise profitability. This suits the A350-900 over the larger 1000. Secondly although the A350-1000 is superior to the 777-300ER economically the global fleet of 77Ws is quite young and not yet ready for replacement. Lastly the new 777-9 looks like it will have more range and be more cost effective on longer range routes.

Despite this lull it appears that the A350-1000 will prove a success and will be in an excellent space to begin replacement of existing widebody fleets into the 2020s, especially as the 777-X remains a paper aeroplane and Airbus will no doubt introduce incremental improvements. Its future looks assured.

It is true to say that neither JC Wings nor Phoenix has succeeded in producing the definitive A350 mould. Both have weaknesses and strengths and the recent addition of the Aviation400 mould to the A350 landscape will be interesting. For the A350-1000 at the present JC Wings have the only mould in town, although Phoenix have announced a series 1000 for early 2018.

The JC Wings A350-900 mould has received most criticism over its nose shape, which is too downward curving from the cockpit to the nosecone, whereas the real thing has a slight upwards change of angle under the cockpit. Unfortunately the A350-1000 mould repeats this error. The aircraft still looks like an A350 (or at least not like a 787!) but in comparison to photos it is clearly not a very accurate nosecone.

This is a shame as the rest of the mould is exemplary and pleasingly has good engine ground clearance, without having to depend on overly long undercarriage legs as Phoenix have had to to resolve the major weakness of their mould. The fuselage, tailcone, vertical stabiliser, winglets etc are all very well designed as are the engine pylons (another weakness on the Phoenix mould).

One feature missing is the prototype’s large tailbumper (although it is printed on) but looking at the first Qatari example I don’t see it so I can understand it not being fitted to the mould if it is not a production aircraft feature. Less forgivable is the absence of the rear underbody antenna (JC Wings doesn’t seem to like antennae in this area), however the other 4 antennae (3 above and 1 below) are present and well sized.

The unique A350-100 undercarriage is excellent, although the bogies don’t move, as they often do with Phoenix widebodies. The engines are nicely made see through efforts and this is the flaps down version of the model. ‘Flaps down’ is an excellent initiative by JC Wings and it is carried off excellently by this mould.

So this would be a top grade mould if not for the nose angle. It is quite a big issue and because of it the mould is probably just a 7, however the ‘flaps down’ elevates it in my eyes to an 8.

The Airbus house colours are modern, elegant and attractive. They are also quite simple and give plenty of whitespace for slogans, especially on such a long fuselage. JC Wings have hit the deep blue main colour of the scheme well, although you could argue that the tail striping is never as white as the three lightest stripes are on the model.

The rest of the scheme, which is basically the big 1000 rear titles plus the smaller and lower main titles are correctly placed. The unusual Airbus house font is correctly reproduced and the colouring is good.

JC Wings printing detail is excellent and this model is an exemplar of why they are better than Phoenix on this score. The intricate and tiny but accurate wingroot landing lights are beautifully printed as is the often tiny underbody detailing. I like the fact that JC outline things like the maingear doors rather than having them impressed into the model as Phoenix do. They are much clearer to the eye.

On the other hand JC still don’t seem to have realised the engine exhaust cones ought to be a metallic blue and not silver, whilst the engine fanblades are still too light. The latter is especially annoying as they have got this correct on previous A350s.

Construction quality is excellent. The model is well put together although if I’m being ultra picky the gap above the starboard wing is wider than the port. There are no tyre tabs and I have to say of late JC Wings has been building its models well, better than it seems to do for Gemini.

From many angles the incorrect nose of this mould isn’t particularly noticeable, however for A350 purists they may want to wait until Phoenix’s A350-1000 arrives, or probably better until Aviation400 puts one out. I don’t doubt that the Phoenix mould will have issues too so it comes down to what errors annoy you more. Aside from the nose factor this is a very nice model, made better by the ‘flaps down’ feature, which shows that JC Wings are showing excellent initiative and are at least trying to provide quality products for their customers.

Nowadays in 1:400 scale you can’t turnaround without tripping over a Boeing or Airbus narrowbody, however it is surprising how many of them are inaccurate or poorly made, or both! The A321 has in particular […]