In the 1990s a 100 seater was a mainline aircraft, not a regional jet but nowadays this is firmly RJ territory as Embraer and Bombardier carve up the lower end of the marketplace between them and begin to encroach on Boeing and Airbus’ turf. They have even found their place in the fleet of a few low cost airlines, most noticeably JetBlue. Their latest special livery certainly stands out as a fun way to mark the airline’s 17th year and Gemini Jets have lost no time in releasing it in both 1/200 and 1/400 scale.

Way back in 2003 JetBlue surprised the market with an astonishing order for 100 Embraer E-190 regional jets marking a major divergence from low cost airline best practice by diversifying its fleet. Indeed the LCC handbook, written by Southwest Airlines and almost universally followed before and since, has been that to keep costs low operating a single family of aircraft is a must.

JetBlue decided that it would go its own way and use the smaller Embraers to supplement its Airbus A320s and provide flexibility to access smaller markets or increase frequency on existing routes. At the time JetBlue was yet to expand into new markets like the Caribbean and operated a relatively small fleet of 41 A320s. On top of this it had an order backlog for 111 more Airbus jets. The market at the time reacted with caution concerned about how the type would fit but also excited that it signalled further high growth opportunities for the New York based airline.

The first Embraers began to join the fleet in December 2005 but the number purchased has never grown to more than 63, of which 60 remain in service. Indeed in October 2013 the airline deferred its E-jet orders in favour of further Airbus A320s as it concentrated on the larger more efficient jets. Despite that the airline in 2017 represents 33% of the Embraer 190’s existing order book and the type has been significant in enabling the airline’s success at its Boston hub. The airline currently operates 27 routes from Boston and the E-190s fly over 2,000 weekly frequencies.

The long term future of the E-Jet in the JetBlue fleet is currently up for grabs. Deliveries of its deferred orders are scheduled to restart in 2020 but the airline is currently undertaking a fleet review to determine whether the higher operating costs of the type can be offset by higher revenue it generates in certain markets.

Despite the uncertainty in February 2017 JetBlue chose an Embraer 190 to debut a special livery for the first time ever. The livery, part of the airline’s 17 year anniversary celebrations, is known as ‘Blueprint’ and is designed to showcase the ‘bones’ of the 100 seater jet by providing an x-ray like view of the aircraft complete with over 50 unique elements such as teddy bears and baby bottles in the overhead compartments and a piñata in the rear hold. 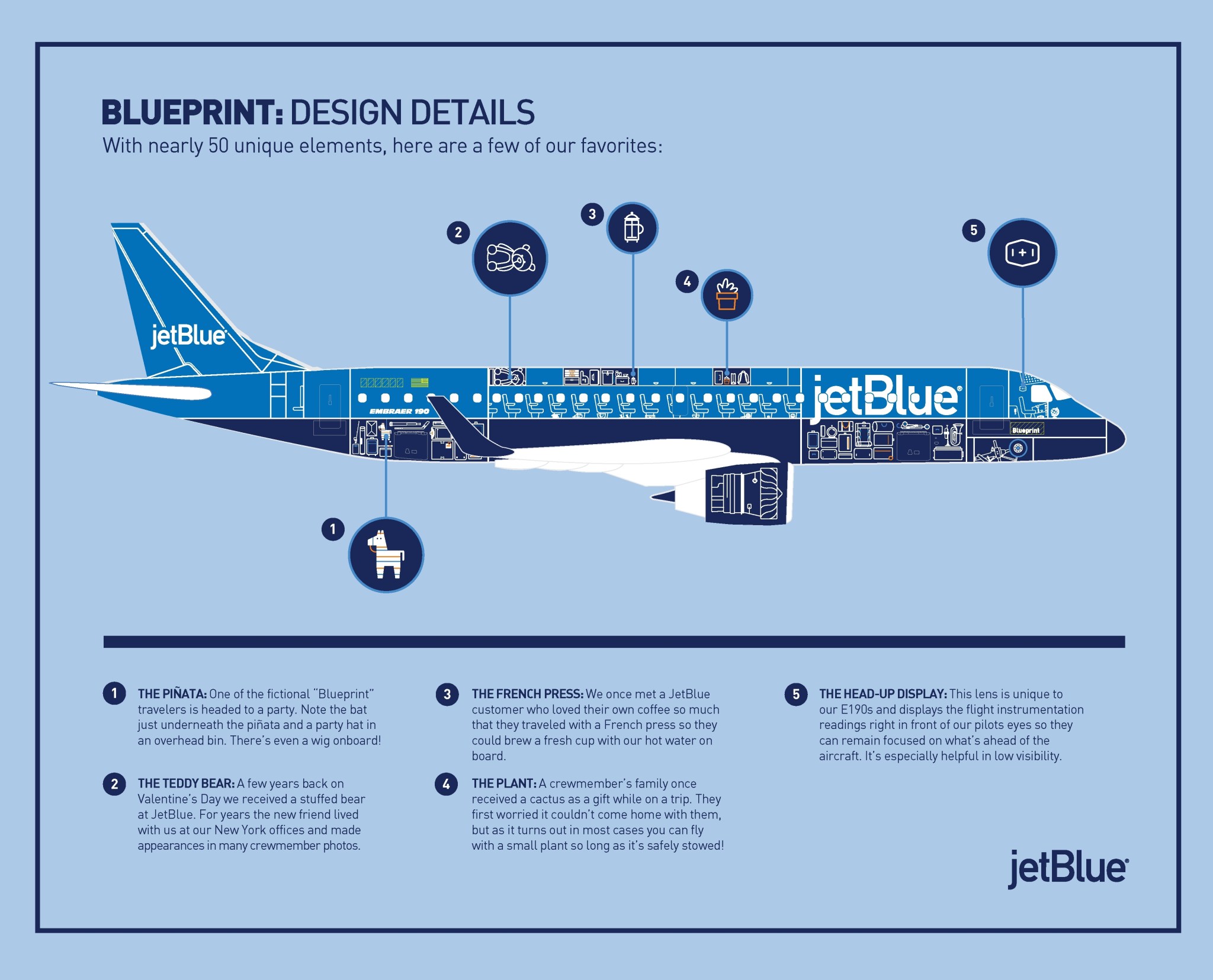 JetBlue describe it as follows:

“Drawing upon the styles of various aviation, nautical and space exploration vehicle cut-away diagrams, the JetBlue design team created a mechanical x-ray of sorts infused with some JetBlue fun.

The see-through paint job draws on both the technical and fanciful aspects of air travel. Mechanical features like the nose gear, jet engine and yoke were among the more obvious design elements to include. But for the onboard features, JetBlue designers drew upon their own travel experiences, crewmember tales, and the airline’s loyal customers for inspiration, even creating fictional characters to compile a list of the items they might be traveling with. Plane spotters are encouraged to give the overhead bins, under-seat storage areas, and the luggage holds a closer look to see if they can spot the nearly 50 items these “Blueprint” customers are traveling with.”

Nowadays almost everything is a low wing twinjet and that might you think make planes a little boring. In truth it does, however all the major manufacturers have a distinct look for their aircraft, which means you would rarely misidentify say an Embraer with a Bombardier or Airbus with Boeing. In my opinion Embraer have always made attractive looking aircraft and the E-jet series continue this trend. Certainly the larger E-190 is more attractive than the slightly stubby E-170.

For regional jets in 1/400 scale JC Wings has been the go to manufacturer for many years and nowadays Gemini gets to share their moulds, although often it doesn’t necessarily use them in exactly the same way. That is the case with this model. The mould itself is very nice. The shape of the nose and fuselage is excellent as are the wings and other control surfaces. The flap track fairings are a little too rounded at their ends but this is minor.

The engines and pylons look good and there is adequate ground clearance for them, although this isn’t helped by the mould’s only real flaw – the size of the nosegear tyres. Like with the Aeroclassics A321s the small size of the tyre gives the aircraft a slight nose down attitude. A larger tyre would be better.

The JetBlue E-190s have a rather ungainly and oversized communication hump after the wing on the mid-line roof. That is missing on this model and perhaps it is for the best as it would be a large add-on which would be difficult to get to fit well on such a small model. Less forgiveable is the lack of aerials. The lower rear underside one exists as it is attached to a long strake along the fuselage but the other three aerials are missing. Why is this? It seems to be a design choice by Gemini as my two other E-190 models (both by JC Wings) have the relevant aerials and they look great.

So in this mould there is a perfect 10 lurking, however the nosegear tyre and seemingly Gemini choice to omit the aerials cost it a few points.

Printing has come a long way when the manufacturers find it so apparently easy to reproduce such complex liveries even on tiny aircraft in 1/400 scale, like the E-190. This is a fabulous scheme and I applaud Gemini for releasing it. I guess having released a 1/200 scale version of the model it is relatively cheap to downsize it to 1/400. I’m not going to painstakingly go through all the livery elements here, there are far too many, but quite a few require a magnifying glass to see properly.

The twin light and dark blue colours are spot on. I am very impressed by the accuracy of the printing. With a magnifying glass it is possible to see elements within the cargo holds like, on the port side, a football helmet, surfboard, bicycle, birdcage and beachball. The colouring of the elements with orange highlights is all present too. On the starboard side the printing is just as good allowing you to spot things like a tuba and trumpet in the forward cargo hold.

Elements of the aircraft are equally well represented like the engines, nosegear and passenger seats. You can even read the text by the front door that says Fly-Fi. The printing around the cockpit is less good, with the globe being not as well pictured but there are other things going on here (see the printing section of the review) and I’m not knocking points off for that.

Overall this is a topnotch job showing true attention to detail by the designer and probably the best recreation of a livery I’ve seen in 1/400 scale. 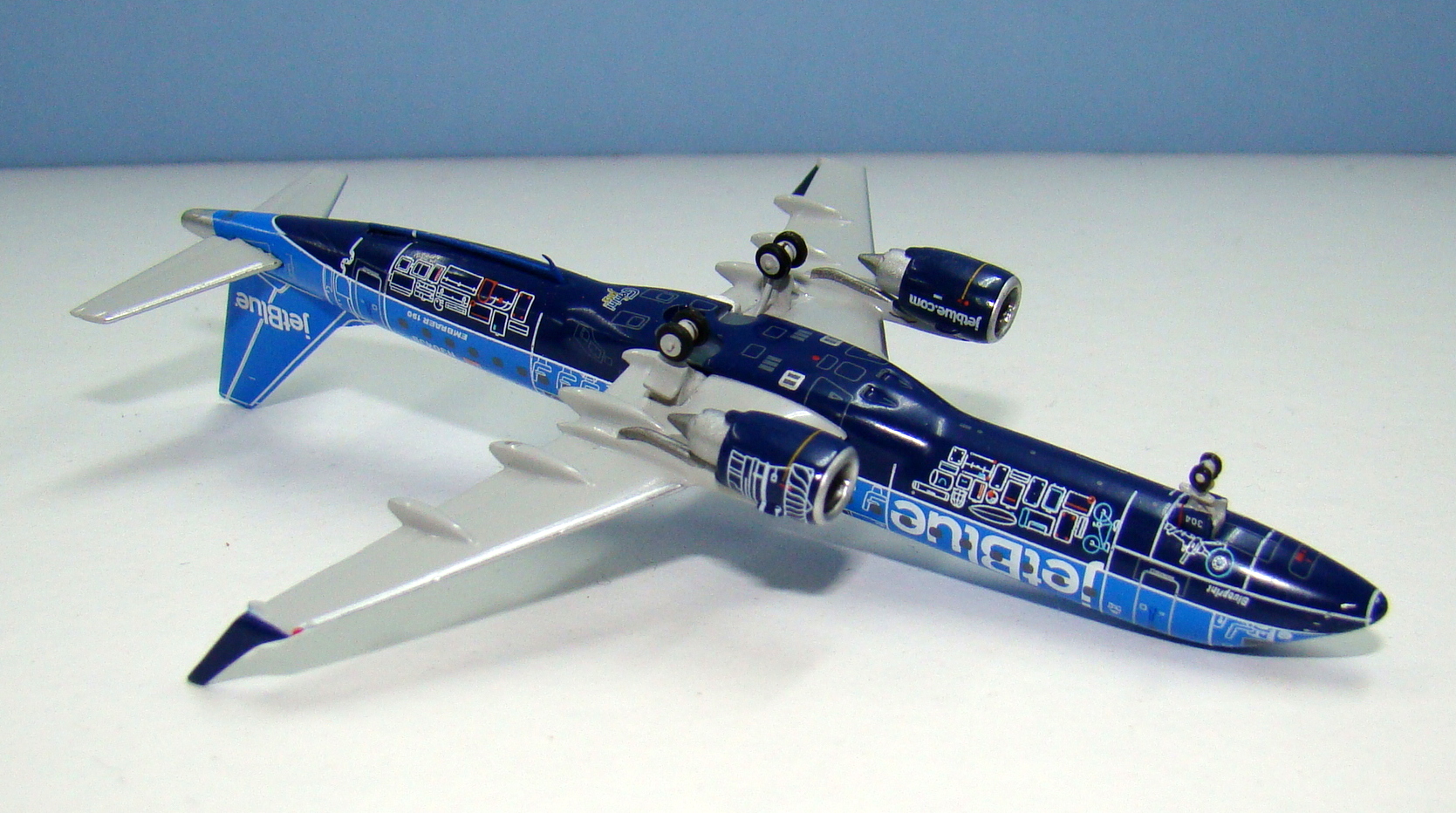 I’ve already given plaudits to the printing in the livery section and in general it is superb, so it is a damn shame to have to knock points off, but I just have too. The problem is that the cockpit windows are just not in the right location! They are too low giving the aircraft too much of a forehead. It just doesn’t look right and you can see it clearly in comparison to the real thing as the instrument panel markings above the cockpit are not the correct shape from the side. Sadly it does impact my enjoyment of this otherwise lovely model.

On the plus side construction quality is great, and it really needs to be as on such a small scale issues with the undercarriage or wings are so noticeable.

This model is a joy in almost every way, unfortunately the one way it isn’t, for me, has quite an impact on the look of the model itself. Fortunately the intricacy of the livery slightly masks the cockpit window placement issue. I still like it a lot but minor tweaks to the nosegear and cockpit would see it gain almost perfect points.

Mould sharing has been a common theme throughout the history of 1:400 scale and when the casting is a good one it is a win-win for everyone. In some cases, where two brands models are […]