The A320neo entered service way back in January 2015, however the 1/400 manufacturers have been slow off the mark with the type and the first model in this scale didn’t appear until Panda’s excellent offering in September. We have had to wait until 2017 for JC Wings/Gemini and Aeroclassics to get in on the game and now all are producing neos. But who has the best version?

The A320NEO has had its fair share of delays, mainly caused by the Pratt & Whitney Pure Power PW1100-JM engines, but still offers significant improvements over the original A320 series and has garnered huge orders accordingly. It is not at all surprising therefore that major A320 operators such as LATAM (both the founding partners LAN of Chile and TAM of Brazil were big A320 operators) have followed on from their A320ceos with neos.

LATAM altogether has 67 A320neos on order and became the first airline in the Americas to operate the type when its first, PT-TMN, was handed over at Toulouse, alongside LATAM’s 4th A350, on August 30, 2016. The aircraft flew out to Belo Horizonte on August 31st and was initially put to use on Brazilian domestic routes from Brasília, Belo Horizonte, Campo Grande, Curitiba, Florianópolis, Porto Alegre, Recife, Rio de Janeiro (Galeão) and São Paulo (Guarulhos). As of November the neo would graduate to regional international destinations.

The aircraft is fitted with a 174 seta layout and features 18 inch wide seats and Airbus’s Space-Flex cabin configuration. LATAM’s second neo, registered PT-TMM, arrived on December 30 2016 and there’s no doubt that the leisurely delivery schedule is caused by the troubles with the engines. These will no doubt eventually be ironed out and the neo will prove itself an able successor to the original A320 series.

JC Wings introduced a new A320 mould in 2016, following criticism of its original heavily seamed cradle mount A320. As you’d expect the new mould is a slot in wing seamless effort, but until now I’ve not got to see it in hand. It does seem likely that for the new neo JC Wings has simply added the new engines to its new ceo mould, since externally the engines are really the only identifiers between a late build ceo and a neo. 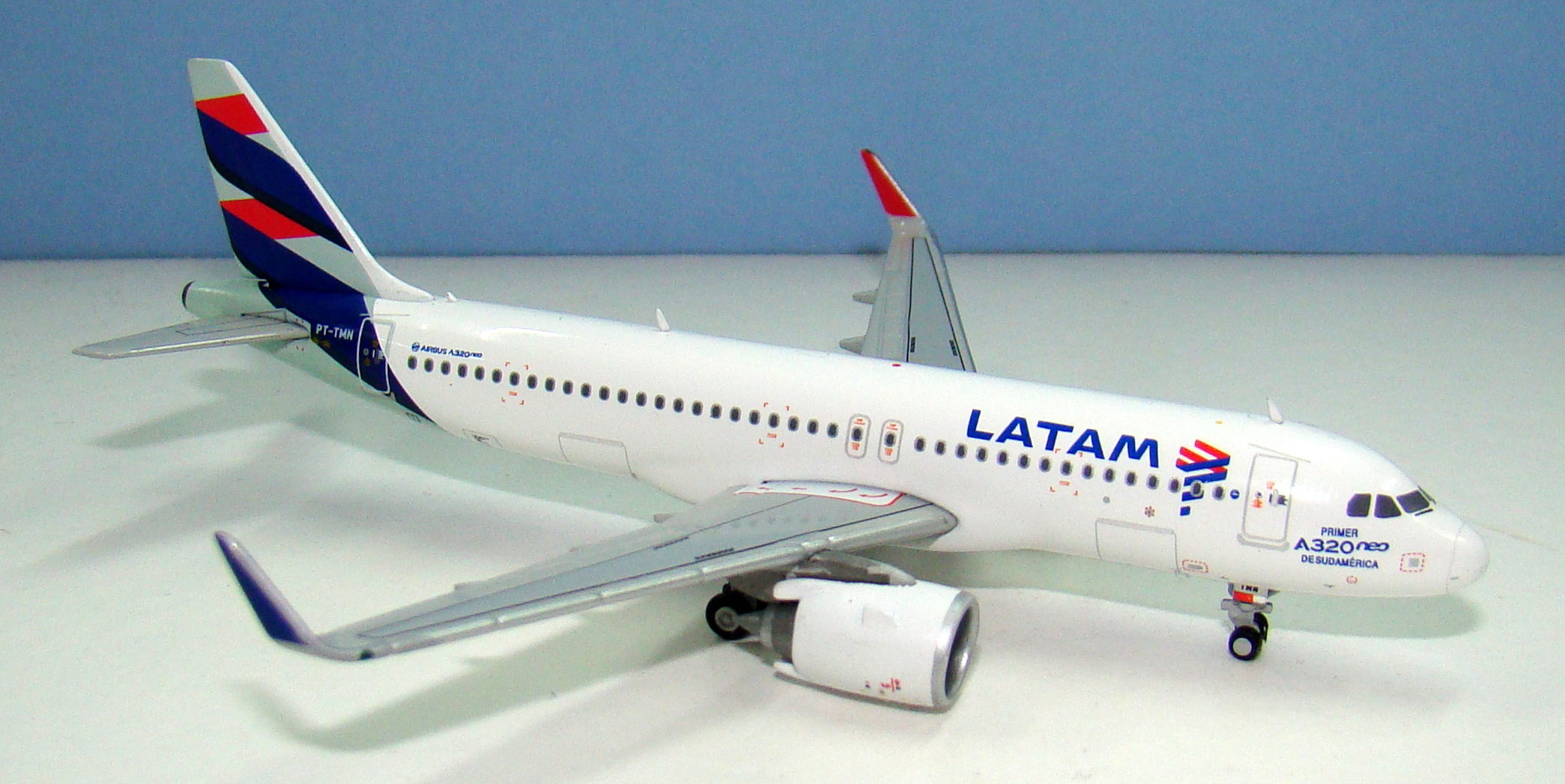 Already I have seen some criticism of this neo release, but is that due to the engines, rest of the mould or both?

It’s both! I’ll start at the rear of the model. The tailcone after the vertical stabilizer is not long enough and the end point therefore is too tall. In terms of antennae the mould has all three up top but oddly lacks the biggish one on the underside.

The rest of the fuselage moving forward is fine until you get to the nose. It’s not too bad but the shape is inferior to the previous JC Wings mould and certainly inferior to the Aeroclassics and Panda models versions. It holds its own against the Phoenix A320 but that is not saying too much.

The nosecone isn’t even the worst part of the mould in fact it is the third worst part. The nosegear is in the wrong position; as with the JC Wings A330 it is slightly too far aft. Unfortunately on the much smaller A320 its inaccuracy is much more obvious. The nosegear leg itself is chunky and rather ugly.

Moving to the other elephant in the room and the engines are literally a massive problem. It looks like JC Wings may have already spotted this as the next release of a neo seems to show smaller engines. We’ll judge that when it arrives but on this model the engines are too big, the wrong shape and fitted too low on the wing. The neo’s engines are curved but this model’s engines are cylinders, basically the same width their entire length. They are also chunky at the rear and just too damn large.

The engine mountings on the real neo hold the engine tops almost level with the wing top edge. On this model the engine pylons are just wrong – or it could be another factor of the engines themselves just being the wrong shape again. The combination of these engine design faults make the engines almost touch the ground. They are less than a millimeter from it.

The result of this is a bit of a mess. The nose shape I can live with, the nosegear position may be survivable sometimes, but the engines are the deal killer here. The combination of these factors makes a truly poor mould. Considering all the good work JC Wings has been doing with its widebodies I don’t understand why they struggle with their narrowbodies so. At least they have shown a willingness to modify the moulds over time. Hopefully they will do so here also.

The creation of LATAM as a single visual identity occurred in April 2016 and it was done by Interbrand – the same bunch behind Iberia’s new scheme. I have to say that this is better than Iberia’s but it is still underwhelming. The new LATAM logo is actually quite nice and is supposed to represent South America. Unfortunately that is completely lost in the application to the tail, whilst the grey tail base colour is ugly in my opinion. Both LAN and TAM had well known and generally liked liveries, especially the former, so to see a sea of white replace that is disappointing and continues the downward trajectory of LAN’s schemes since the lovely blue crown effort from the late 90s. Oh well I’ll just have to suck it up and get on with the review!

The primary colours of the new LATAM scheme are white, indigo and coral. Gemini have gotten the colours spot on for the standard livery elements. The tail and titles are perfect. What aren’t perfect are the special A320neo markings on the nose. I have seen comment that JC Wings have got the colours of some of the text incorrect. That is untrue all the text ought to be blue, it’s just at distance that some looks grey. This is because the A320neo text is a lot thicker and a different font to the rest. In close up all the text is obviously blue. The issue with the model is that the text above and below the A320neo markings is too thick. It makes it stand out a lot more than it ought to.

In the end this livery is so simple there isn’t much that can be gotten incorrect. The nose titles don’t look exactly like on the real thing but otherwise for me the livery is fine. I should mention however that this model has awful silver fanblades, just when you thought the manufacturers were coming to terms with the blade colours.

The printing offers a chance for some redemption; it is mostly very good. I have no issues with the printing aside from perhaps a lack of detailing on the engines and the nosegear being so jammed into the fuselage that you can’t really see the rego on the nosegear doors. The recent Iberia A340 had delicate panel printing on the engines but this neo’s barrels are pretty much just white.

Construction of the model is largely very good. Everything is fitted snugly and the wheels all roll. JC Wings and Gemini seem to have massively improved the putting together of models recently, or maybe I’ve just been lucky. In fact judging from some of the other examples of this model I’ve seen it looks definitely like the latter! Either way there are no problems here until you get to those engines again. Obviously they almost drag on the ground but the port engine is worse than the starboard and not only that also appears to be fitted further forward slightly too. The engines really damage this model’s credibility.

This model is something of an embarrassment for JC Wings and Gemini. The engines are laughably poor but they are easily fixable in the future. The position of the nosegear and the chunkiness of the gear leg will impact not just this neo mould but also the A320ceo mould too, and is much harder to fix. Somehow this model scrapes to 20 but I would avoid this model if I was you. Then again the Aeroclassics version of this same aircraft has the wrong engines on it so don’t buy that either! We will just have to wait for a better LATAM neo in the future and hope JC Wings recognize and fix at least the engine issues this mould demonstrates.

Not long ago I reviewed the Phoenix release of the UN sustainable goals ‘United Dream’ 787 owned by Xiamen Airlines. That review led to JC Wings sending me an example of their model of the […]

Recently there has been a major uptick in the number of new moulds being introduced in 1:400 scale, which I hope illustrates the good health of the industry and the hearty result of increased competition […]