Phoenix seem to continue on oblivious to the rest of the 1:400 world producing much the same types of model as they have done for years now. That would not be so damning if their models were particularly good or interesting, alas too often they are not. It doesn’t help that many of their better moulds have been eclipsed by rival JC Wings and NG Models offerings either. Even so they do sometimes surprise and their 777s are still on the whole decent. So, I have taken a chance and acquired this ‘classic’ 777, but does it meet expectations. Sadly, yes it does! 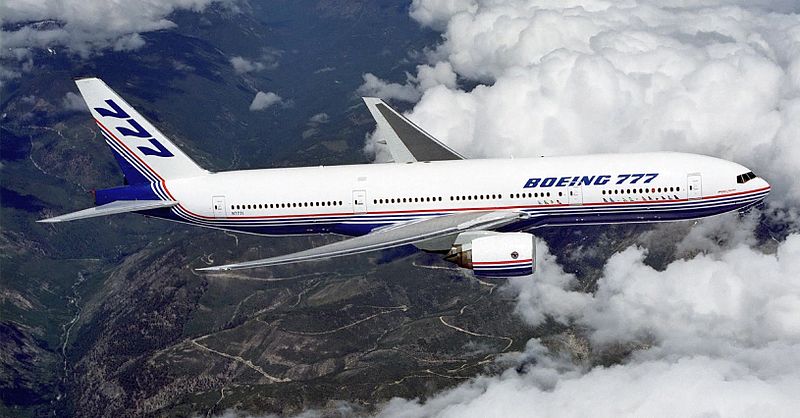 Boeing was the last of the big three airframe manufacturers of the 1990s to bring their next generation widebody product to the market and unusually this paid off for them. By waiting they were able to take advantage of the new engine technology that allowed their new 777 to be a twinjet whereas McDonnell Douglas struggled to coax the necessary range out of its MD-11 trijet and Airbus added four engines to its A340. Neither of those designs could come to match the 777 in the long-term, although Airbus was lucky to be able to expand its A330 into a true competitor for the Boeing twin.

One of the major benefits the 777 programme had was that it was the first time Boeing worked so closely with the airlines. Its “Working Together” group of 8 major airlines (All Nippon, American Airlines, British Airways, Cathay Pacific, Delta Air Lines, Japan Airlines, Qantas and United Airlines) first met in January 1990 and they had a major part to play in what was at the time still called the 767-X. Amongst other things the airlines steered the cabin cross-section, cockpit and flight control design, ETOPS status and wingspan.

Not all of these were successful steers. United’s keenness for the 777 to fit into DC-10 gates led to the initial suggestion of folding wingtips (as on carrierborne naval aircraft) but nobody ever ordered this option and it was dropped. By October 14, 1990 the design had coalesced enough for United to place its launch order for 34 777s with 34 further options.

It would take nearly four years until the first flight of the 777 with the first aircraft, N7771, rolled out on April 9, 1994 and flying for the first time on June 12. Flight testing was successful and by April 1995 the test aircraft could be released for a world tour flying 45,890 miles in 10 days. Finally, the first 777 entered airline service on June 7, 1995 as United flight 921 took off from Heathrow bound for Washington Dulles.

The 777 has certainly proven itself a winner for Boeing and 7 of the 8 Working Together airlines purchased the type (Qantas has been the exception). Interestingly the prototype aircraft were on-sold to airlines and N7771 became B-HNL with Cathay in December 2000, after conversion to Rolls-Royce power. She served for 18 years prior to withdrawal in June 2018 and has since been sent to the Pima Air Museum for preservation.

Phoenix has been trading on its 777 mould’s success for some time but its lead has gradually been eroded and overtaken by competitors so that it is now the second best 777-200 in 1:400 scale. Even so, the casting is accurate and still a more than competent addition to any collection.

The shape of the nose and fuselage is very good with my only very minor complaint being that the diagnostic 777 tailcone is not squared off enough and is a little too rounded. The landing gear is also very good with Phoenix’s trademark silver detailed gear leg and hubcaps. I do think the nosegear sits a little too short and sometimes the Phoenix 777 has a slight nosedown attitude. It is certainly not as tall as the JC Wings 777 mould.

The wings slot into the fuselage well, with a tighter fit than on the JC Wings mould. The actual wings themselves are fine. The engine pylons hang well under the wings but their shape on the underside is not 100% accurate and neither are the shape of the maingear doors.

The Pratt & Whitney engines are well shaped and this mould hasn’t given into Phoenix’s latest fad, spinning fanblades. That’s fine by me and means the engines do not suffer from having a multi-part construction with the rims attached to the rest of the nacelles separately.

It is certainly not the mould that let’s this model down.

Boeing’s 1980s era house colours made it into the late 90s with no problem and they are rather attractive and suit the 777 well. The colours are simple, a base white with a deep blue belly and pair of pinstripes above and a final red pinstripe atop all the blue. The colours are fine on the model and broadly the placement of livery items looks correct, that is until you take a closer look.

The blue belly curves up onto the tail of the aircraft but it is not a straight diagonal line until the tail is reached. Phoenix haven’t correctly captured the curve where the lines meet the tail base and so the portion of blue on the tail is too small and the amount of white space between the 777 and the striping is too large.

At the nose the small ‘Working Together” titles are present but they are too far from the lowest pinstripe and too close to the cockpit windows. This isn’t aided by the cockpit window printing, but more of that in the next section.

The livery also has the customer airline tails visible, which by airline front to back are: United, All Nippon, Euralair, Thai Airways Int, British Airways, Lauda Air, Japan Airlines, Cathay Pacific, Emirates, [unknown – ILFC?], China Southern, Continental Airlines, Japan Air System, Gulf Air, Transbrasil and Korean Air. The tails are all present and correct, although to be honest it is a little hard to tell what some of them are, even when you know what they should be.

Broadly this is one of Phoenix’s better printing efforts, although I do think the airline tails could be printed more finely. The big let down from a printing perspective is the cockpit windows. For some time now, Phoenix just seem to have forgotten how to do this on a 777. They are significantly too long and poorly placed at the sides (kind of similar to their 737s). They need to revisit the printing plans for their 777 cockpits. For me it is a serious off-putter since it so impacts the look of the aircraft. Additionally, I would rather the main part of the window was darker and not the medium grey they choose to use. 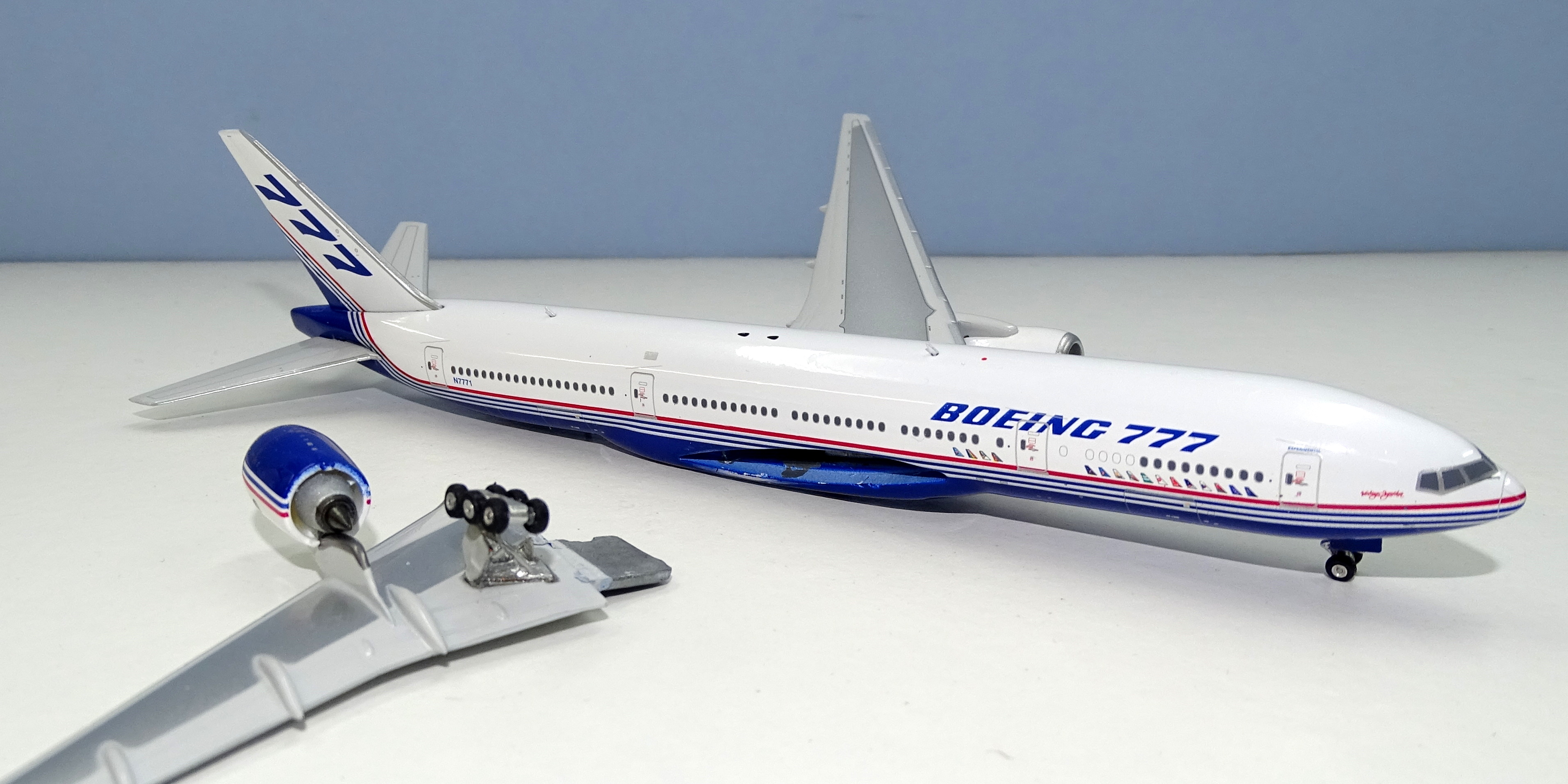 Unfortunately, it is build quality that really lets this model down, but I’d expect nothing more from Phoenix. First the model came with the starboard wing detached, an all too common Phoenix trait, and inspection shows it has almost no glue on it. Fortunately, that means that at least it hasn’t damaged the fuselage. That issue is fixable but the other major build problem isn’t.

The port side engine is not properly fitted to the wing pylon. It is far too low so on that side the engine is nearly on the ground. Annoyingly the engine is very well glued to the pylon so there is no hope of detaching it and fixing it properly. Mine isn’t the only model with this issue I’ve seen and the starboard engine is fitted properly. It really mars the model. Lastly the nosegear isn’t fitted straight and tilts to the left.

I am far from happy with this model, which ought to be an easy win for Phoenix. The level of care involved in this is very low and shows that simply having a decent mould isn’t enough to mean a model should be purchased. The sloppiness around the livery application I can live with but the engine and cockpit windows seriously damage the model’s looks. I guess I should be thankful as I was beginning to think that NG Models superior quality was putting me out of business. It is a lot easier reviewing bad models but the downside is now I am stuck with this in my collection. If JC Wings get off their bums and produce this model before I turn 50 this subpar Phoenix attempt will be exiting my collection as soon as possible.

Phoenix Models has announced their September lineup of diecast aircraft releases. The manufacturer is scheduled to release 22 new models in both 1:200 and 1:400 scales. Highlights include the TAP Portugal A330-300 “Stopover, Finnair A350-900 […]