The 737 MAX series has taken a massive battering in the wake of the Lion Air and Ethiopian Airlines crashes, which have seen the type grounded indefinitely. There has even been doubt that the type can recover. Certainly smaller airlines have been put into a quandary surrounding the MAX’s ongoing utility. To be honest Aeroclassics have received a similar, albeit much smaller, backlash over their mould for the MAX-8, however as always Aeroclassics are the only manufacturer producing the diverse MAX releases that make 1:400 worthwhile. So here I take a look at one of those airlines that may be rethinking their MAX commitment and also another look at the Aeroclassics casting.

Fiji Airways is a Pacific success story. The late 2000s had not been kind to the Fijian flag carrier, then known as Air Pacific, but under the leadership of a new CEO, David Pflieger, the airline was turned around. One aspect of the turnaround was the rebranding of the airline as Fiji Airways. Not only did this associate the carrier with its home nation but it was also vital for growth in Asia, where it was confused with Cathay Pacific, Cebu Pacific and an air conditioning company! The rebrand was unveiled in October 2012 but the rename wasn’t officially implemented until June 27, 2013 by which time the carrier had received its first A330 wearing the new colours. 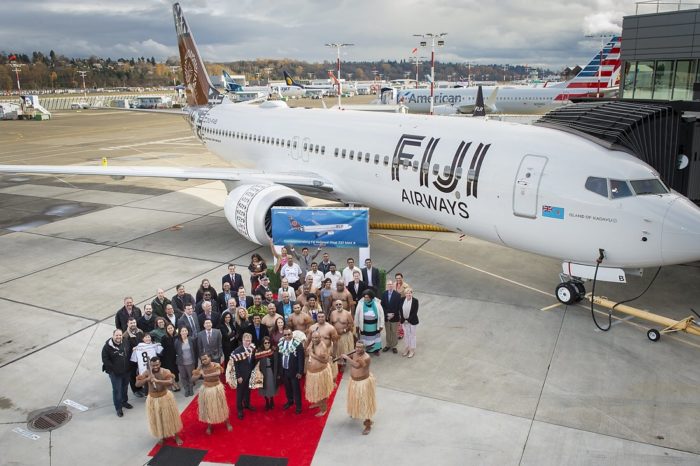 Certainly, the relaunch of the airline has proven a key element in its ongoing success. In 2017 the combined Fiji Airways Group was able to announce its largest ever profit of F$95.8 million. Even better this was achieved against a background of sustainable growth, with passenger numbers up from 1.4 million to 1.6 million. Success has continued into 2018 with profits for that year, announced in May 2019, a solid F$55.3 million. This was despite further growth in the form of a new long-haul route to Tokyo, the addition of 3 DHC-6 Twin Otters and the airline’s first 737 MAX-8.

Fiji Airways announced its order for 5 737 MAX-8s in November 2016 with the aircraft expected to replace the existing fleet of a single 737-700 and four 737-800s for flights to regional destinations such as Australia, New Zealand, Hawaii and other Pacific islands. The first 180 seat MAX, DQ-FAB ‘Island of Kadavu’, was formerly handed over to Fiji Airways on December 1, 2018. Initial services took the aircraft to Adelaide and Wellington. The second MAX, DQ-FAD, was added on December 31.

The MAX proved reliable in Fiji Airways service but the Fijian authorities were reluctantly forced to ground both of the Fijian aircraft on March 13, three days after the crash of Ethiopian flight ET302, to comply with Australian and New Zealand regulators. Both aircraft remain parked outside of Fiji Airways maintenance hangar in Nadi.

The loss of two of its fleet has put Fiji Airways in a difficult position and it has had to lease in a Miami Air 737-800 as cover. Whether it ever receives the other 3 MAX’s on order is open to question as the pall that the MAX is under is harder to swallow for a small carrier reliant on tourist traffic. The A321NEO would seem like a good fit for it but whether it takes the path that airline’s like Icelandair have taken remains to be seen. 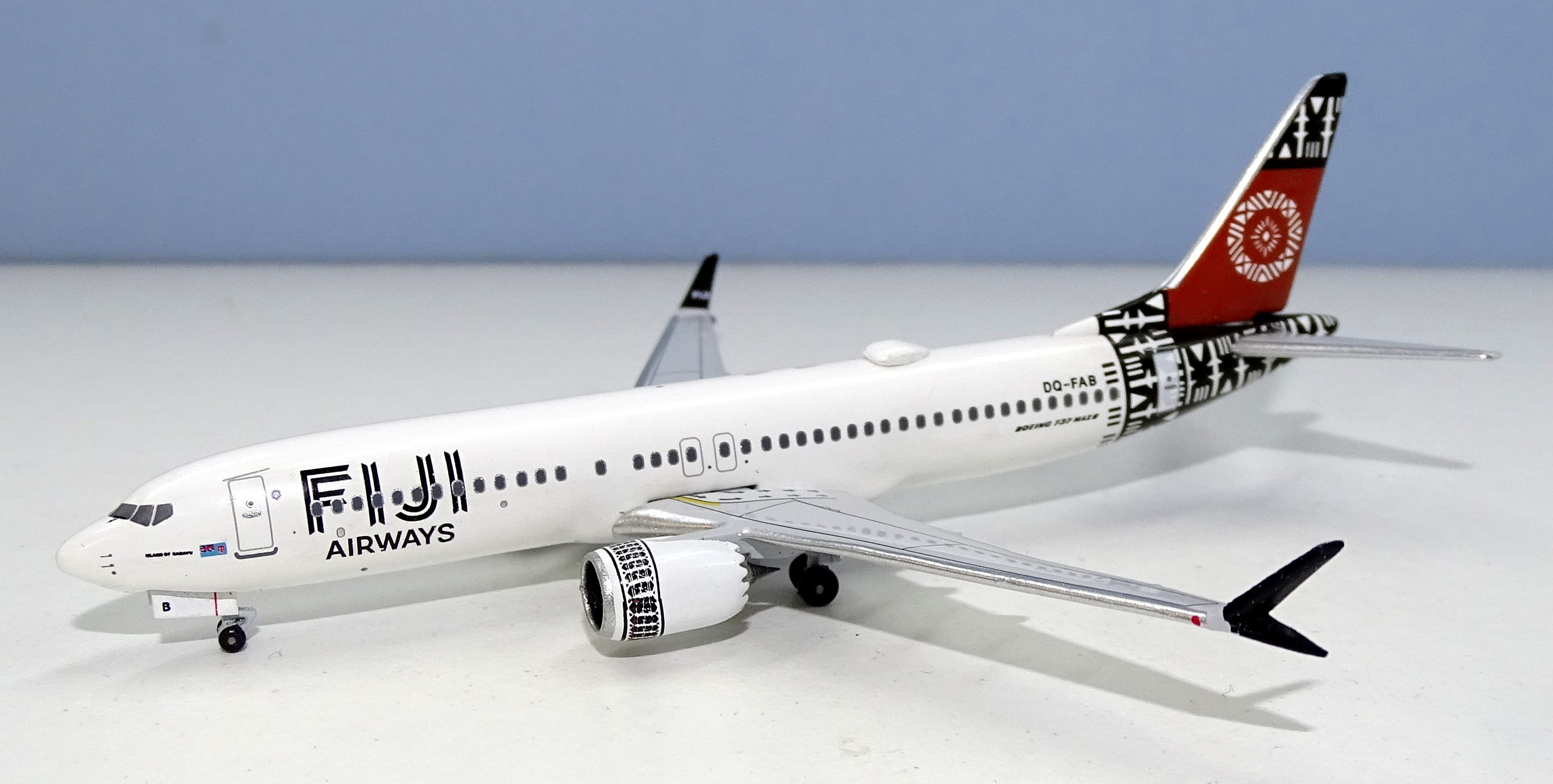 The Aeroclassics MAX has received its fair share of criticism and whilst it is clearly not as good as the Panda and Gemini / JC Wings moulds it is not a disaster. The overall fuselage shape is very good and the cockpit and nose region effective. The underside of the nose doesn’t curve upwards quite as gently as it should but it is still a good nose region.

The engines and pylons are well shaped and the general shape of the wings is fine. Some early Aeroclassics MAXs had a bent wing but this has largely been resolved in later releases. One failing of the wings is the lack of strong detailing on the control surfaces. With no printing assistance the flaps are largely invisible. 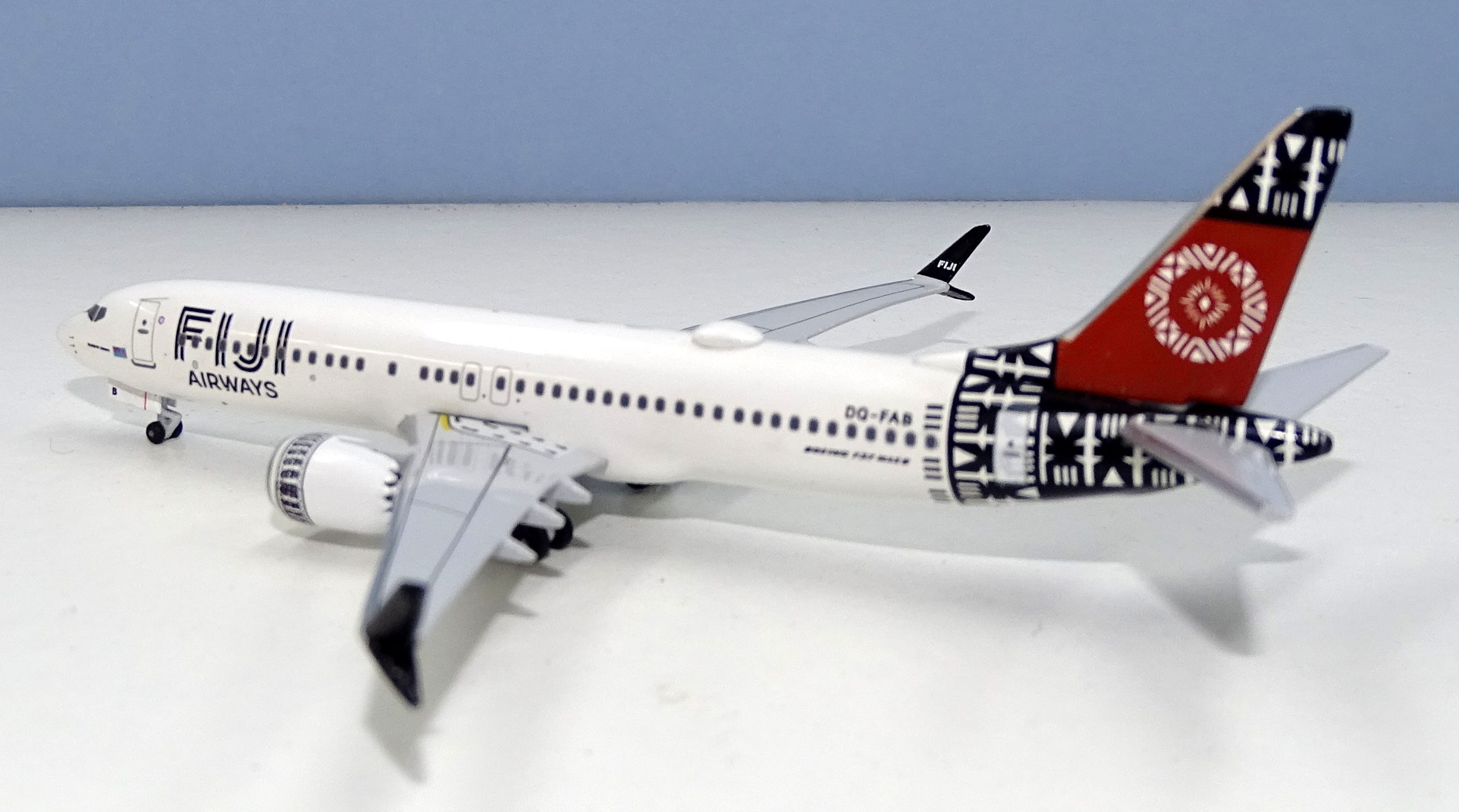 The mould’s biggest issue is without a doubt the undercarriage. The height of the entire package is good but this is mainly because the nosegear doors are way too large. The gear leg height is actually pretty good but the nosegear tyre is also too small, plus a simple tyre on spigot with no wheelhub. New landing gear on this model would improve the mould considerably. 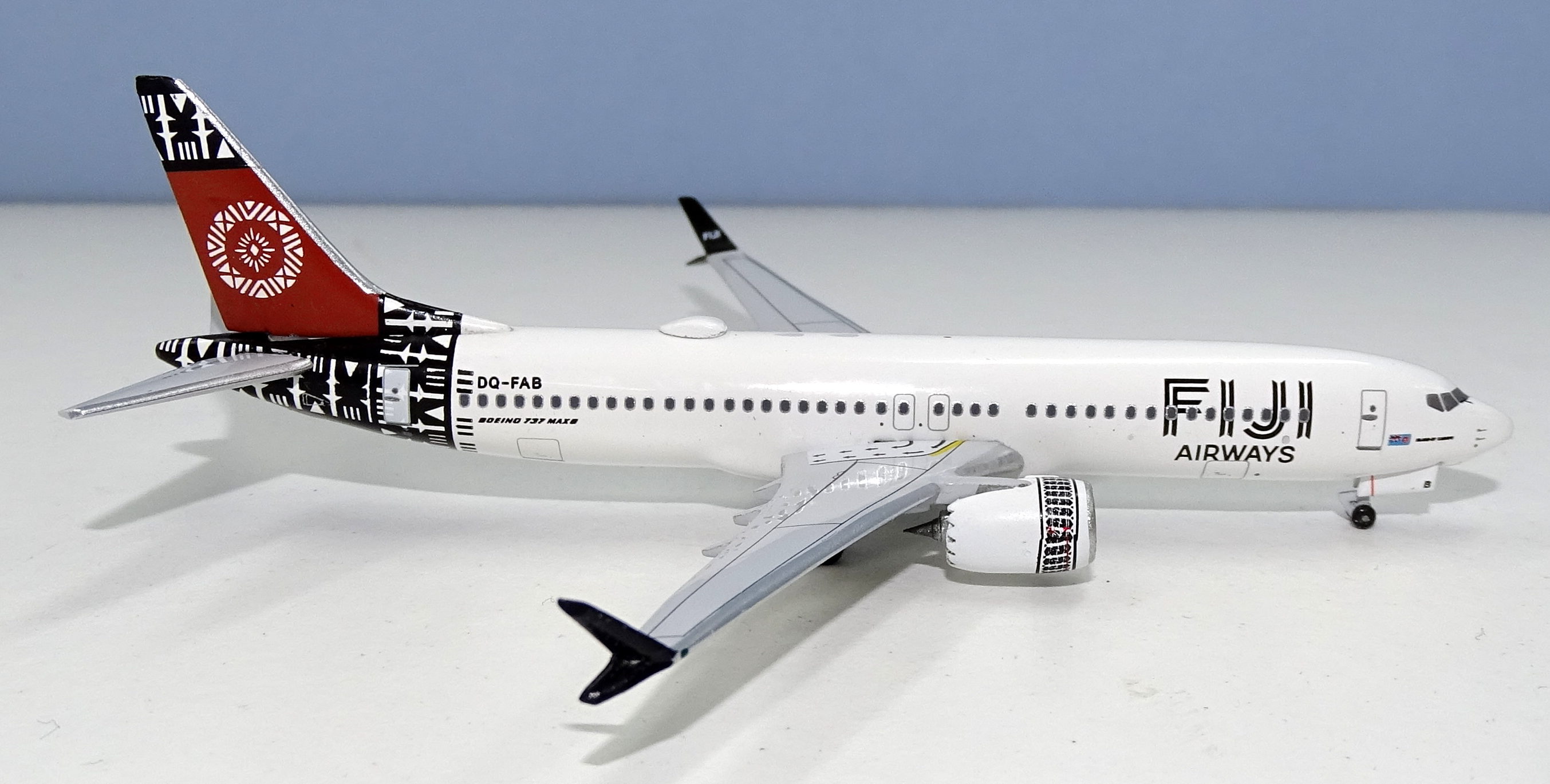 The maingear also suffers from a simple and inaccurate set of tyres plus the gearleg is too vertical. Aeroclassics has made a concession to modern model making with their MAXs and fitted the large rear dorsal Wi-Fi dome. It is an improvement, although arguably it isn’t quite the correct shape. Typically, there is no sign of aerials.

It is clear that this mould can’t compete one on one with the other MAXs in this scale, however nobody else is likely to make Fiji Airways. With that in mind its failings are more forgivable. 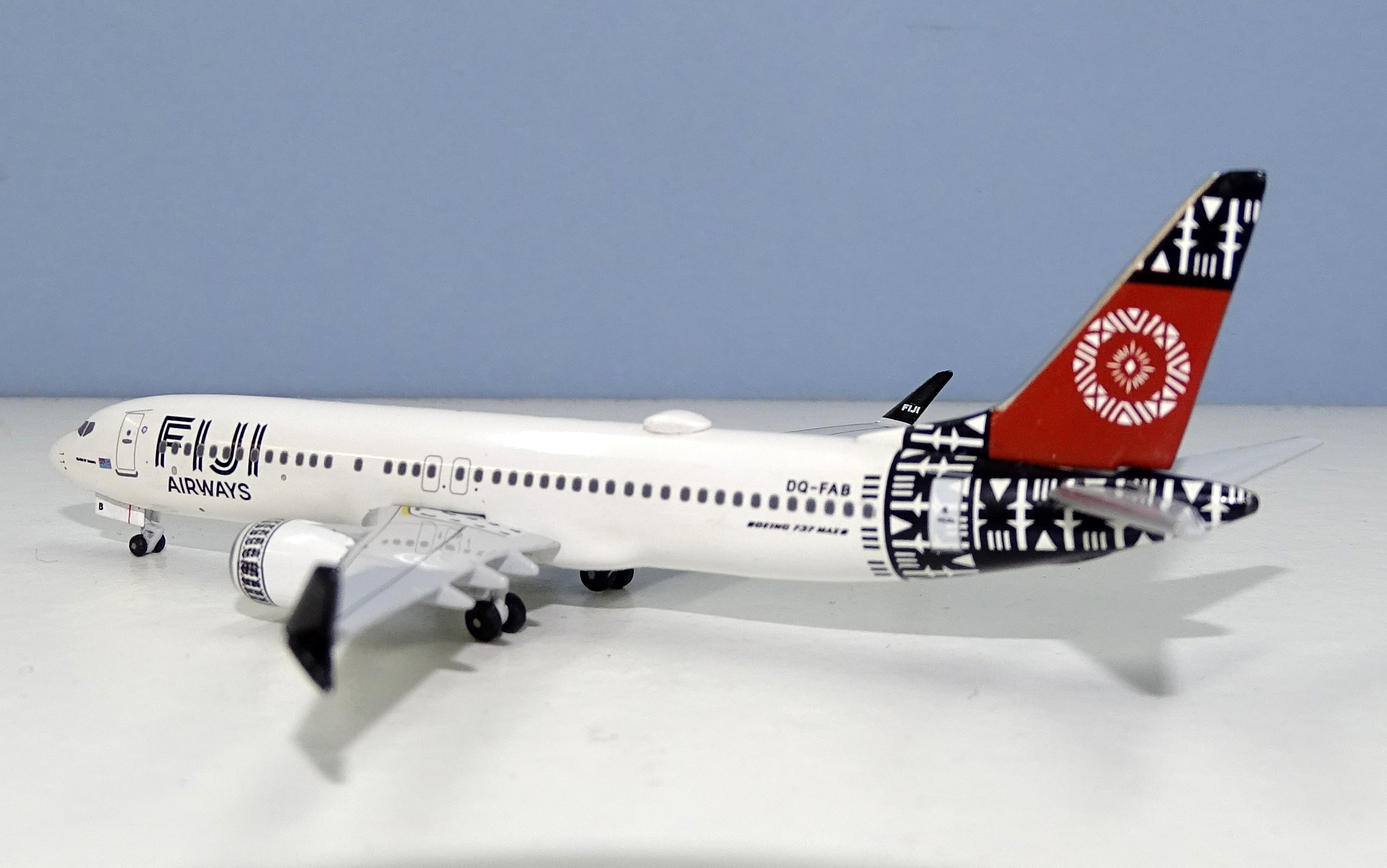 Fiji Airways new brand was designed by Futurebrand and was a real change from the bright rainbow scheme of Air Pacific. In many ways it is rather eurowhite, but it is also authentic to Fijian culture and classy. The design was a partnership with the Fijian Masi artist Makereta Matemosi and focuses on three Masi motifs. The Teteva symbol forms the centre of the tail design and is surrounded by the Makare motif. These are then complemented by the Rova motif on the engines. It has been broadly well received.

Colour wise the livery makes use of browns – one much darker than the other. In some photos the darker brown can look black and unfortunately that is what Aeroclassics appear to have used on this model. The other medium brown is within acceptable parameters.

Placement of the major livery elements is generally sound but in detail rather sloppy. The Teteva symbol at the centre of the tail seems a little too small but is otherwise well rendered. Unfortunately, the Makare motifs around it on the rear fuselage are often not angled at 90 degrees to the Teteva, both at the tail tip and the area around the rearmost passenger entry door.

The Rova symbol that wraps around the engine nacelles also has a rather clumsy overlap join point clear with the aircraft side-on. Aeroclassics can surely do better if they tried harder.

Other minor elements of the livery are mainly present from the main title font, inner winglet text, aircraft name and flag. Here too though there is some extra detail that could be added. The model misses the solo B that should be above the cockpit windows and lacks the admittedly tiny BULA titles by the front door. I am not sure it would be possible to print the latter in 1:400 scale I admit. 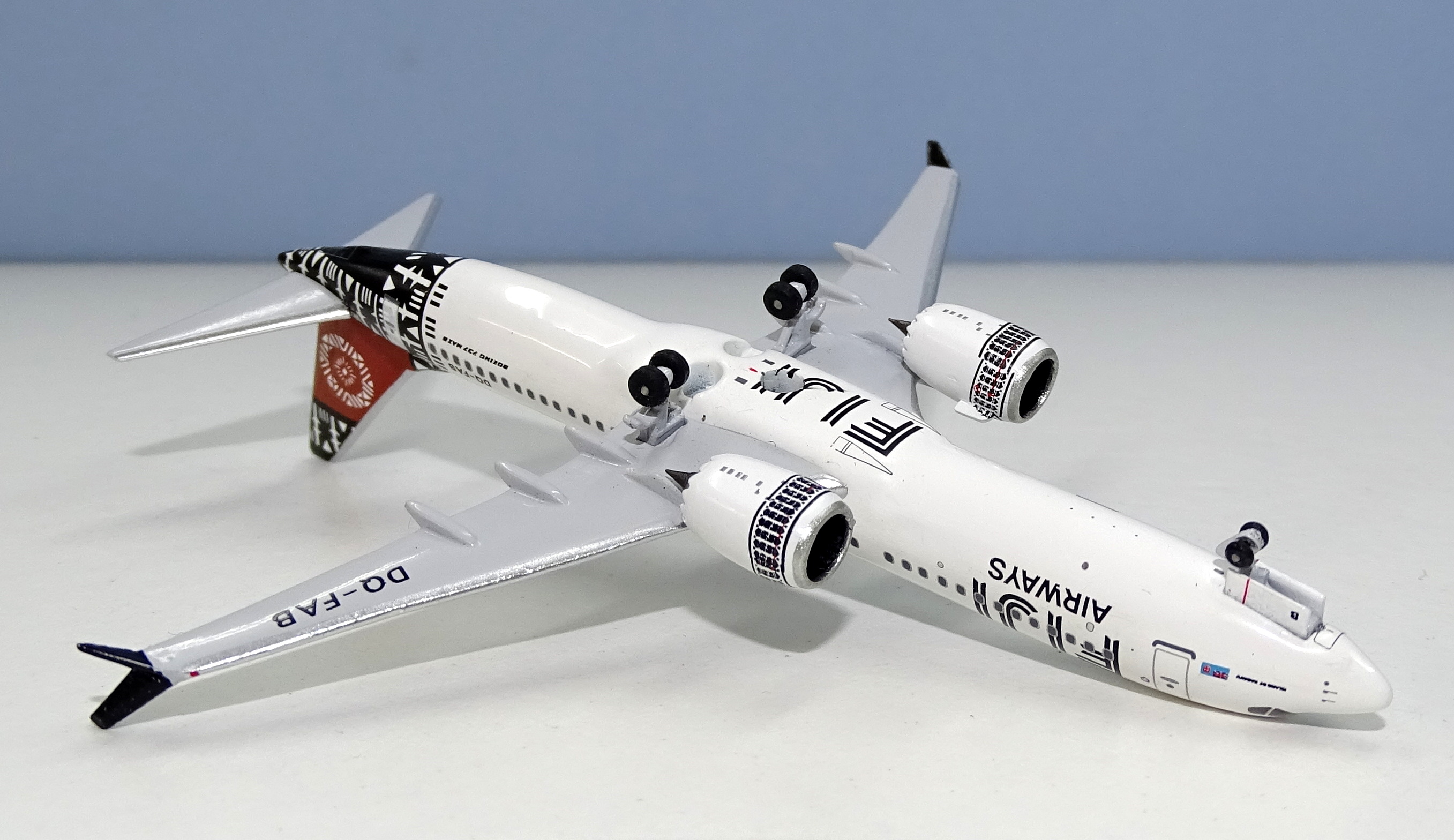 The printing quality on this model is decent and I have no major complaints other than the comments I have made under the livery section. One area I am not thrilled about is the engine intakes. Avoiding bright silvers is one thing but painting the entirety of the inner engine pure black is a step too far. The inner rims should at least be silvery grey even if the fanblades themselves can charitably be black.

One area the model does not fail on is the build quality. Everything fits tightly and is well glued together.

When I look at this model, I actually don’t dislike it, however it is clear that the Aeroclassics MAX releases involve an element of compromise. Nobody else makes such an interesting range of MAXs but nobody else has such a weak offering either (Phoenix almost does). In addition, Aeroclassics livery application is still a little hit and miss, especially when it comes to colours.