Competition is a good thing and you can be sure that the moment a major flag carrier unveils a new livery several of the manufacturers in 1:400 will be on it straight away. Aer Lingus unveiled their new scheme in late January so you could almost be forgiven for thinking the makers were sleeping as come late April only Aeroclassics has released the model. Presumably Chinese New Year is to blame but Phoenix have their own version just about to hit the shops. Here I’ll look at the first to market by Aeroclassics.

Aer Lingus has been the green roofed Shamrock waving flag carrier of Eire ever since I was a child, but the acquisition of the airline in August 2015 by IAG to the tune of 1.5 billion Euros was always going to lead to standardization and alignment with IAG’s other airline assets: British Airways, Iberia and Vueling. The IAG takeover saw the airline leave state ownership totally for the first time in 80 years and was hotly contested with Ryanair.

The takeover appears to have been largely positive for Aer Lingus with a 9.6% growth in the first year under new control, focusing on additional long-haul capacity, in the form of extra A330s, on busy routes to Los Angeles and Newark.

Profits grew by €109m that year and have soared since with a 2018 record result of €305 for 2018. Capacity continues to increase also with a 10% growth in 2018 and new routes to Philadelphia and Seattle. In fact, transatlantic capacity for the airline has nearly doubled in the past 5 years and in 2019 will constitute 2.59 million seats.

With the strong strategy and continued success, it was no surprise that the airline decided to also update its image and given the awful rebrand of sister airline Iberia in 2013 it was also no surprise that the majority of the green would also disappear. I have heard a factor in this is allowing interoperability between the IAG airlines and you have to wonder how long British Airways will keep its iconic blue belly.

Apparently, Aer Lingus spent 12 months listening to employee and customer feedback and over 50 different shamrock designs were considered prior to the finished article. The new scheme doesn’t float my boat much but it is smart and keeps a sense of playfulness despite joining the sea of Euro-white schemes worn by other contemporary European airlines.

EI-EDY, a 2009 build A330, was the first aircraft to wear the new scheme and flew its first service in the new colours on January 17th, between Dublin and New York. Aer Lingus hopes to have all its fleet repainted by 2021 so if you want to catch the full green you better get to it soon.

The success of the A330 has led to a wide variety of schemes being worn by it and accordingly to a wide variety of 1:400 moulds. In fact, it seems you can hardly be in the scale unless you have an A330 with NG Models being the latest to create one. Literally everyone has one from Gemini Jets to Aviation 400 to Panda Models to Phoenix but without a doubt one of the best is that of Aeroclassics, albeit they haven’t used it a lot recently.

Back in 2017 I did a detailed review of A330 moulds but back then there were only 4 active moulds as opposed to the 7 actives now. The Aeroclassics A330 is right up there with the best of them and would match the Panda mould (which is likely a clone of it) if Aeroclassics would bow to popular opinion and put aerials on their models. Aeroclassics have started fitting Wi-Fi domes to their 737 MAX-8s but this A330, which should have two is still lacking.

The rest of the mould is effectively perfect. From the nosecone and front fuselage to the tailcone everything looks great. The undercarriage is also excellently detailed and positioned with very well done tyres and tyre-hubs. This is all the more impressive considering the tyre size problems that have been present on the more recent 767 and Tristar moulds.

This aircraft is fitted with CF6-80E1A4 engines and the engine moulding is excellent as are the underwing engine pylons. The CF6s are quite an unusual engine as they have a massive third stage exhaust spike and an unusual main body shape but Aeroclassics nails both aspects.

The Aeroclassics A330 is a near perfect mould whose only fault is the lack of aerials and domes. 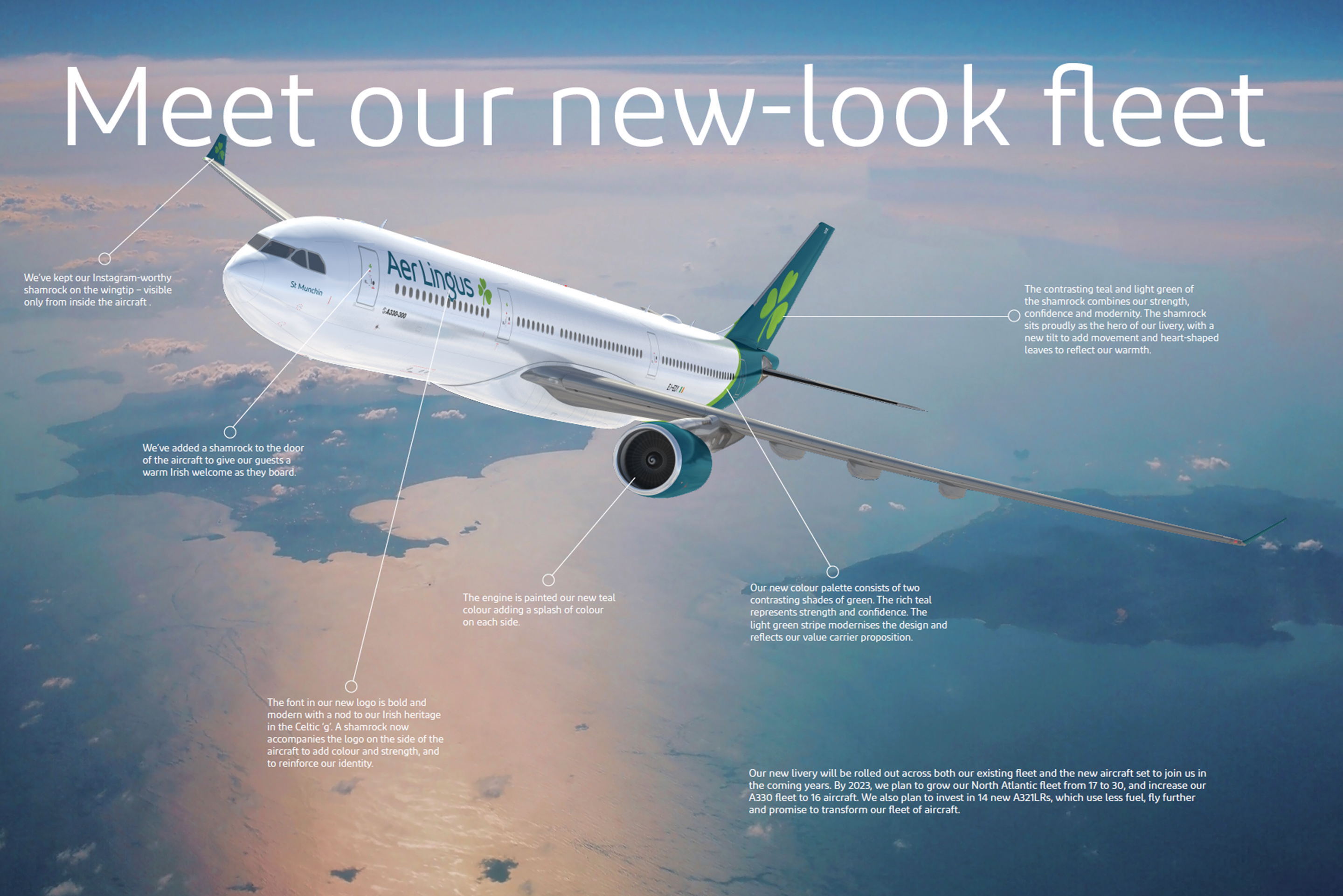 So onto the new livery. Aer Lingus are certainly proud of the scheme and although simple it does have more components than it first seems to. Firstly, the Shamrock has been restyled with a tilt to ‘symbolize dynamism and speed’.  It appears in four places – the tail, inside of the winglets, by the titles and a tiny one on the L2 door. Aeroclassics has correctly got them all and they are well shaped and include the requisite two-tone shading. 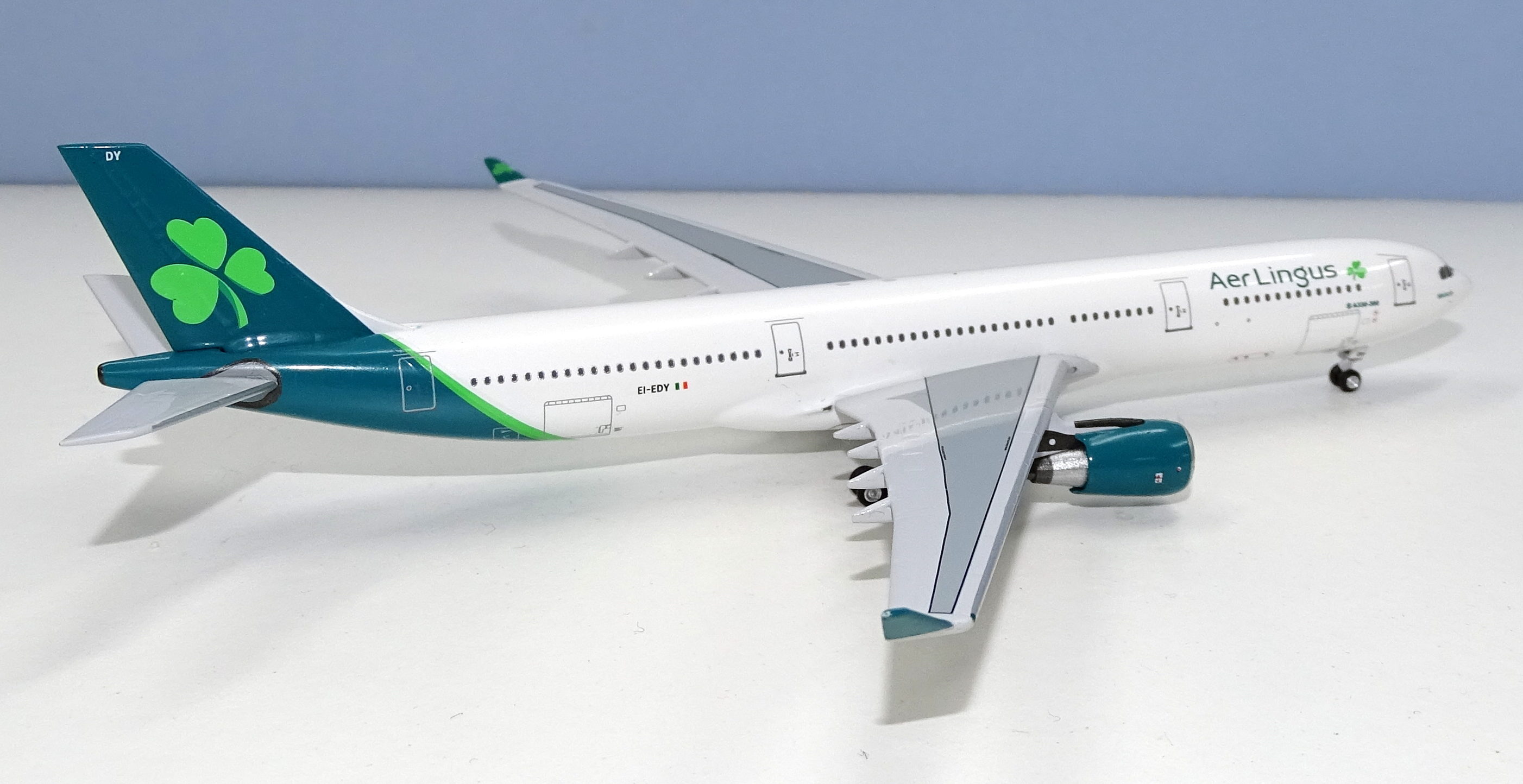 The main green of the livery is a dark teal and although the livery elements that use this are all present and in the right place, Aeroclassics have gone way too dark with it (a fairly common trait of Aeroclassics). The light green also isn’t bright enough.

The new title font and gaelic style g are well represented as are the aircraft names (St Munchin on the port and Maincín on the starboard sides). There is however too much distance between the main titles and the shamrock on the port side, which is due to the fact that Aeroclassics have printed 16 rather than 15 windows and then aligned the titles with the left edge and the shamrock with the right. The starboard side is fine.

At the end of the day as smart as this scheme is there isn’t that much going on so Aeroclassics work here isn’t especially complicated. Nonetheless they have done only an average job of the livery. 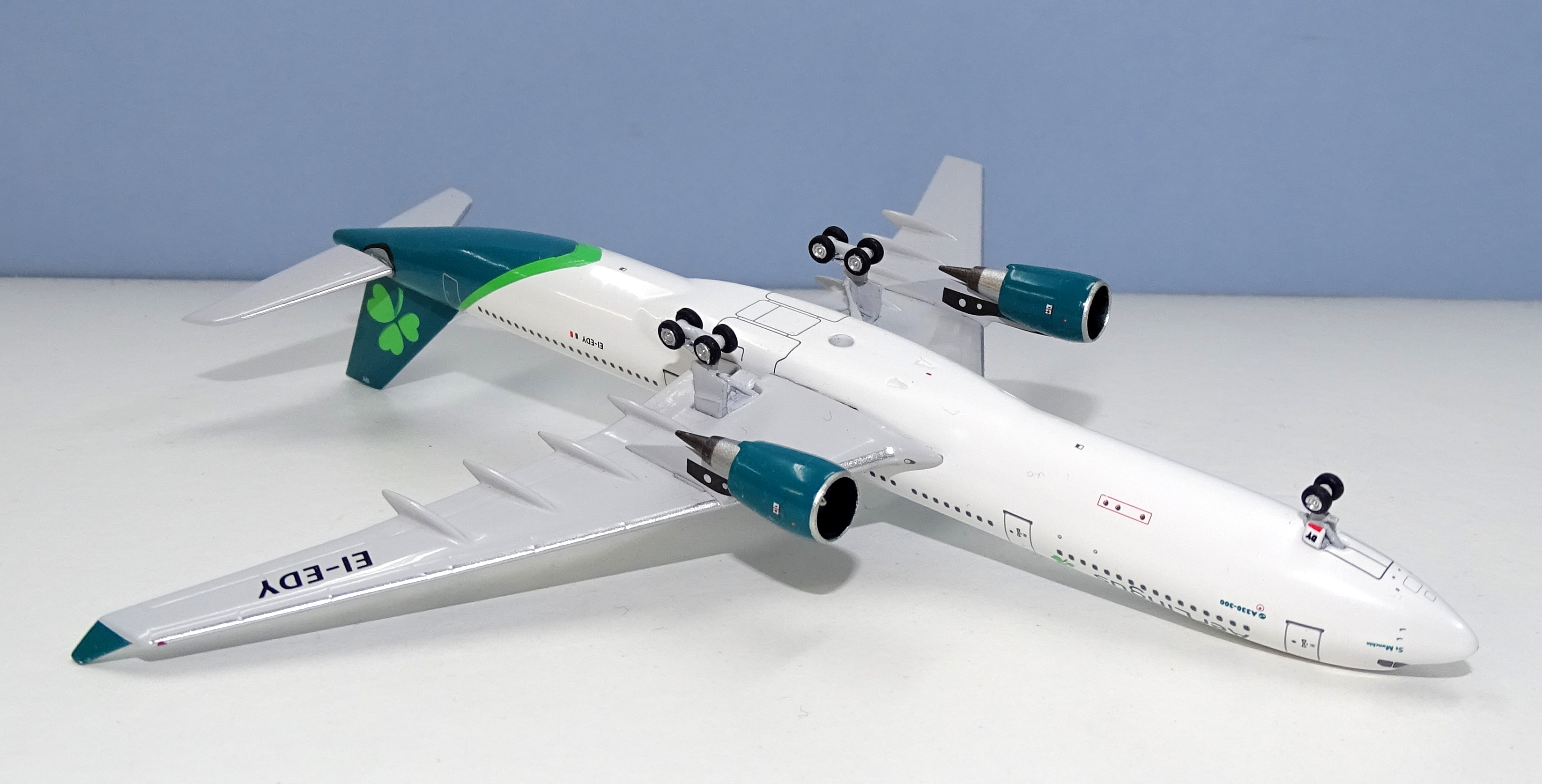 Printing isn’t always Aeroclassics strong suite but they know how to do their A330s and this model is pretty decent as long as you aren’t looking for any printing hints as to the position of the aerials and domes, as there isn’t any. Otherwise however all elements are printed well. Of recent Aeroclassics have been making more effort with the colour of the engine inners and fanblades, however this model appears to have slipped through and still has silver blades.

What is disappointing with this model is the construction quality. The port side wing is easily detached due to a lack of paint (this has been a regular occurrence across many manufacturers in this year’s reviews). There is no damage so I can survive the wing issue, but a bit more glue please manufacturers. Likewise, both the rear horizontal stabilisers are loose and can be easily moved by hand.

Twenty-three is a disappointing score for what should be an excellent model given the heritage of the mould and the simplicity of the livery. The livery research of Aeroclassics has improved of recent and this shows well with this model however once again the poor discipline at the factory has seemingly conspired to impede the quality of the finished article with some poor colour and sloppy construction.

In this week’s Airport Spotlight we take a look at one of the most well-crafted, and detailed 1:200 scale collector airports as we venture to Pat Michael’s custom designed 1:200 scale airfield.

In my last review I took a look at the 1970s Aloha Airlines 737-200 and compared it to the older Gemini release, however Aeroclassics released four Aloha 737s in June 2017. One of the others […]