When it comes to classics Aeroclassics remains the biggest player despite the intrusion of NG Models into this space in recent times. As with Gemini Jets they have access to a very impressive mould catalogue, which they have been increasingly leveraging to produce some excellent choices of classic airlines. Unlike Gemini they are more willing to take a chance and regularly produce airlines not just from the past but also from nations outside of North America, Europe and East Asia. Colourful 707s are one of their specialties and hard to resist.

Cargo has been an important component of Ethiopian Airlines fleet since at least the 1980s. Nowadays the airline operates 10 777 freighter and two 737-800 freighter conversions. That alone is a fleet larger than the entire passenger operation during the mid-80s when the airline had just received its first widebodies, in the form of a trio of Boeing 767-200ERs.

This aircraft remained in the fleet, primarily used for cargo, in the 1980s and was joined by the 707-327C ET-AIV in May 1985. This aircraft had begun life in 1967 with Braniff International but had been leased to Trans Mediterranean in August 1973 and eventually became OD-AGZ in their fleet. A Uganda Airlines 707-338C was briefly leased in 1988 and a 707-385C (ET-AJZ) added in October 1990. This latter aircraft kept the 707 fleet at two as long-serving ET-ACQ was written off in an aborted take-off at its Addis Ababa base on July 25, 1990.

Two years earlier the freighter fleet had gotten a further boost with the arrival of a pair of Lockheed L-100-30 Hercules (a third was added in December 1992). Ethiopian was also looking at newer jet freighters too and its first of five 757-260s was a 757-260PF, Ethiopian becoming the first passenger airline to receive a pure freighter version.

On the debit side the recently added ET-AJZ was destroyed in March 1991 by shelling whilst parked at Asmara during the war between Ethiopia and its breakaway province of Eritrea. ET-AIV remained as the sole 707 in the fleet and served until being sold to the Republic of Congo in November 1998. She was not to have a peaceful career however as on April 14, 2000 she was damaged beyond repair, operating for the government, when an ammunition warehouse caught fire at Kinshasa. Around 109 people were killed on the ground and at least five other aircraft damaged. Although dismantled in 2001 the 707’s fuselage was still largely intact in 2009.

With her destruction that meant that of the 6 707s operated by Ethiopian at various points 5 of them had been destroyed, albeit only 3 in Ethiopian Airlines service. The sole survivor was a 707-351C that Ethiopian briefly leased in 1978. 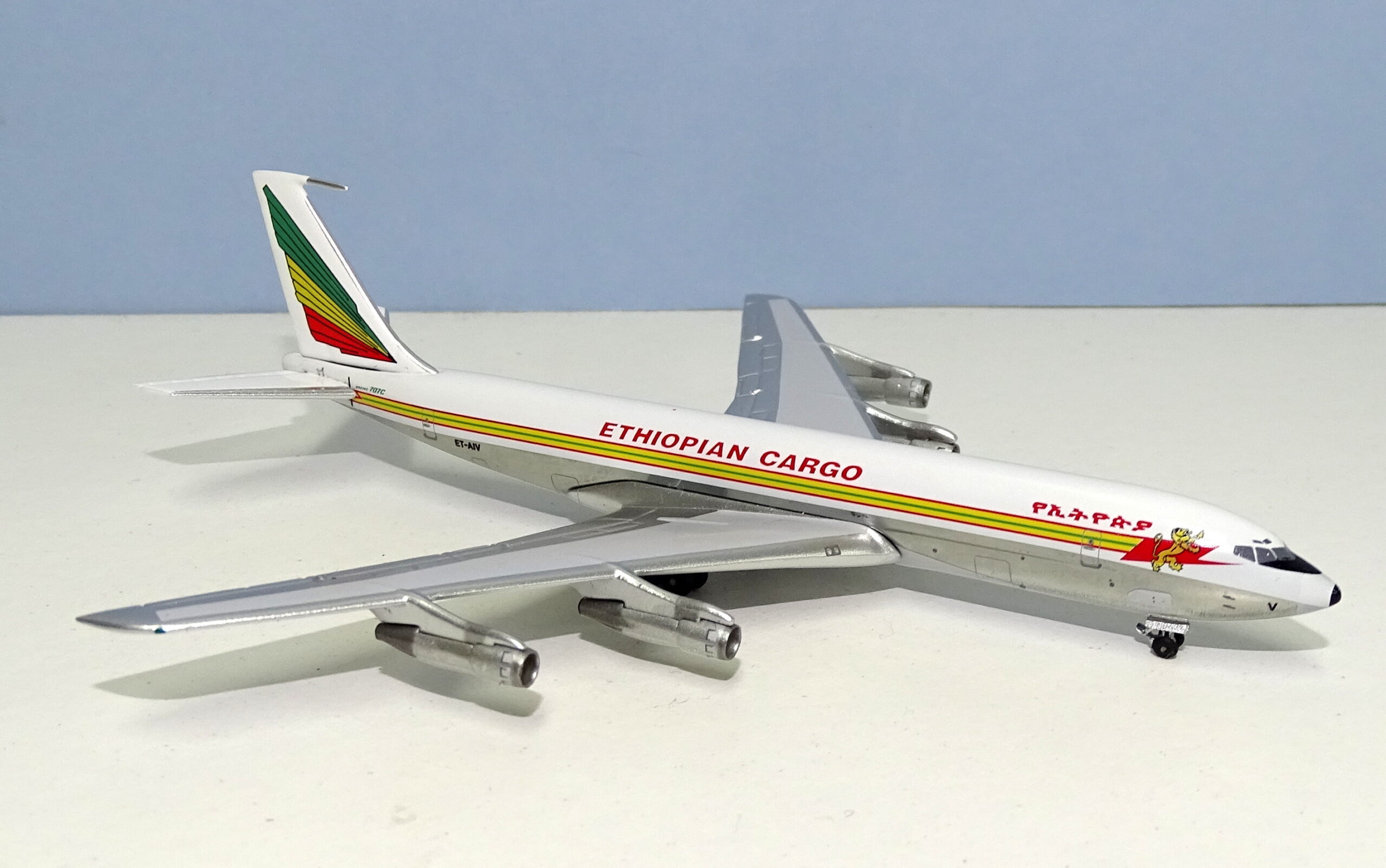 There are several moulds for which Aeroclassics is rightly lauded and their Boeing 707-320C / 320B Advanced mould is certainly one of them. For the full details on all the 707 variants see David Hingtgen’s excellent piece at AirlinerCafe. The difference between a 707-320B and a 320B Advanced is mainly in the nosegear but since this is a 320C anyway that doesn’t matter. The 320C has the heavily modified wing of the 320B but also the rectangular nosegear doors and of course the SCD too.

What is especially impressive is this excellent casting dates all the way from 2003. Yes, that means this is a cradle fit mould but it is a very good one and the seam line follows the wing join fairing well. The later Witty Wings mould looks very much like a seamless clone of the Aeroclassics and often the Aeroclassics looks like it has a sharper and better nosecone. Otherwise the moulds are effectively identical. 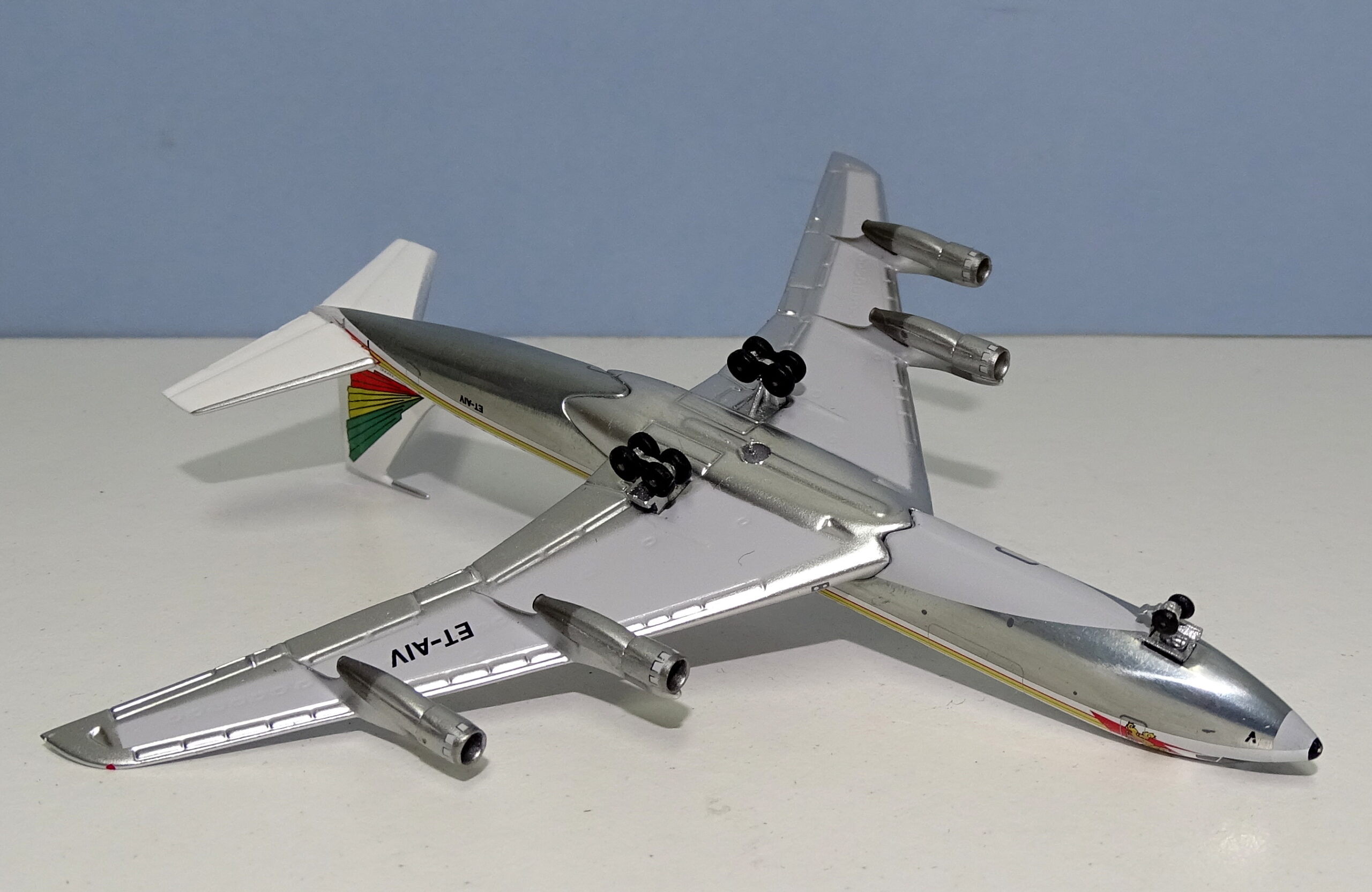 The wings correctly illustrate the double kink extension at the rear and the flared extended wingtips of the 320B/Cs. The engines and engine pylons are nicely shaped and the turbo-compressors are accurately depicted only on engines 2, 3 and 4 as they ought to be on a 707-320B/C. Or at least on most as it seems this particular aircraft actually only had turbo-compressors on engines 2 and 3 so was something of an oddball. 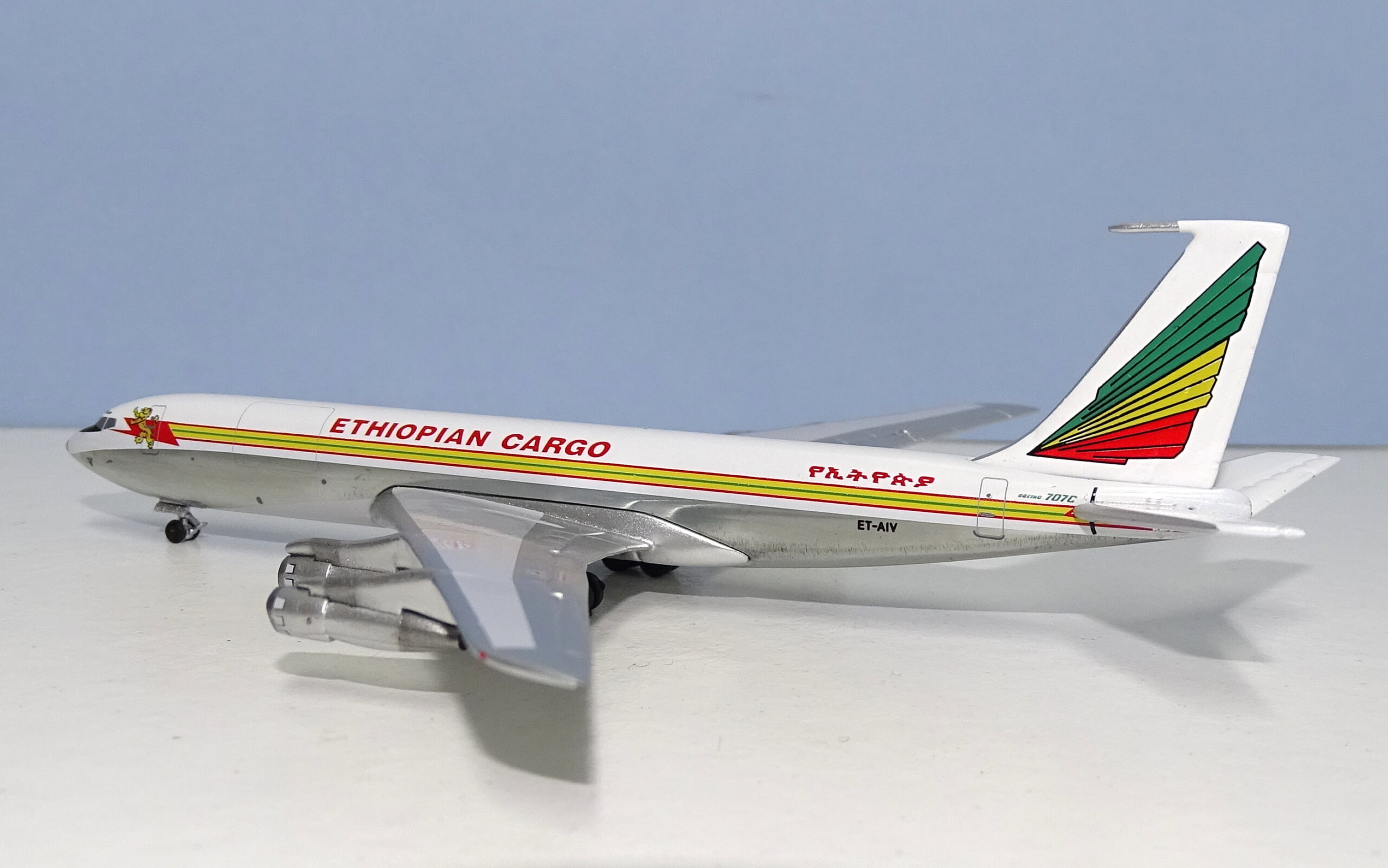 Searching for negatives with the mould the lack of aerials is standard for Aeroclassics and the HF antenna on the tail top is a little thick and prone to being bent in transit. Overall, this is a fantastic mould and one of my favourites. 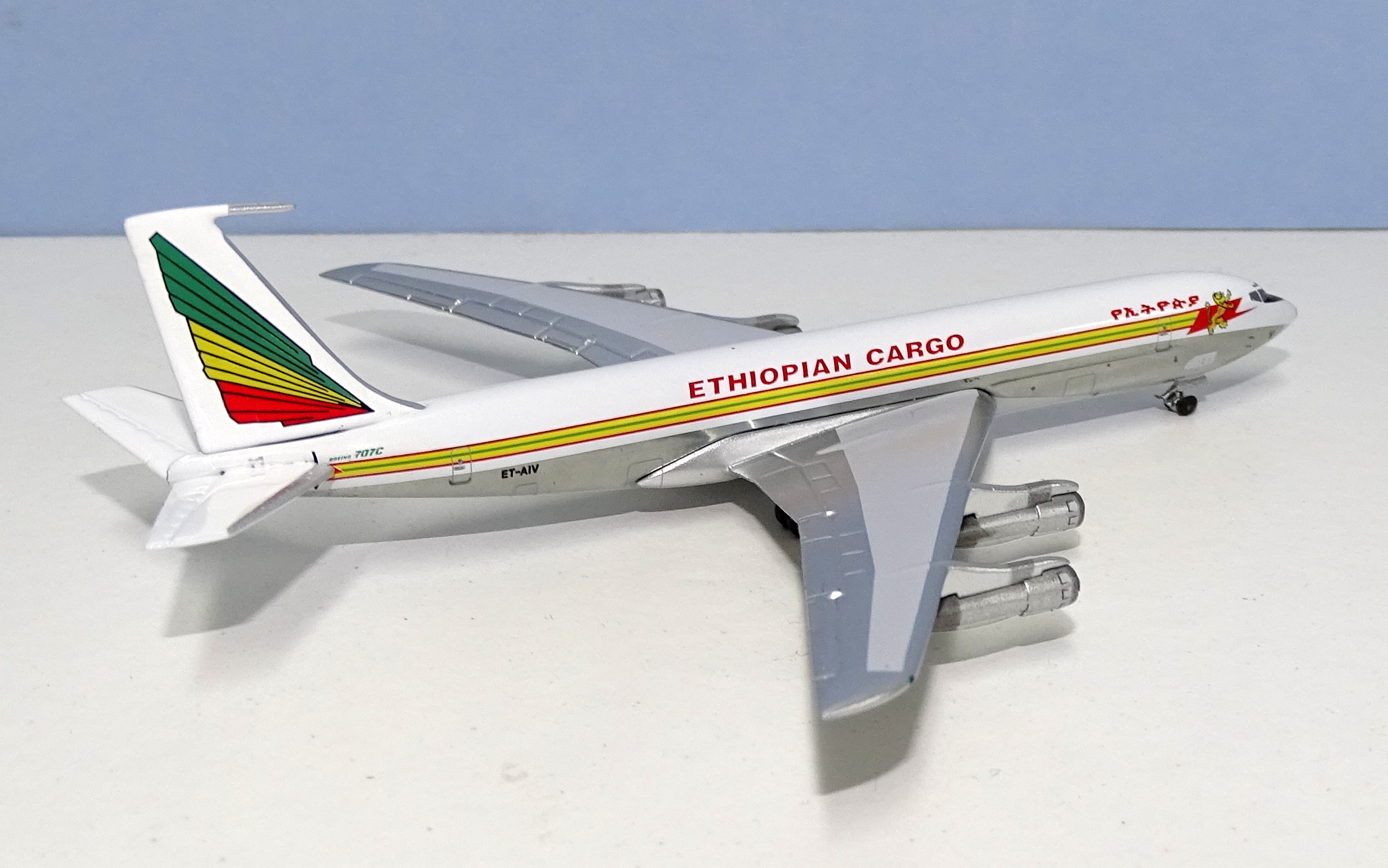 Ethiopian kept roughly the same livery well into the 1990s and it has always looked decidedly retro even when painted onto a 757 or 767. The heart of the scheme is a thick yellow cheatline outlined and bisected by thin red stripes. It ends just behind the cockpit in a dramatic red flash with a yellow lion rampant. Lots of natural metal is featured on the lower fuselage and the tail logo is an unusual red, yellow and green triangular flash with feathered rear tips. 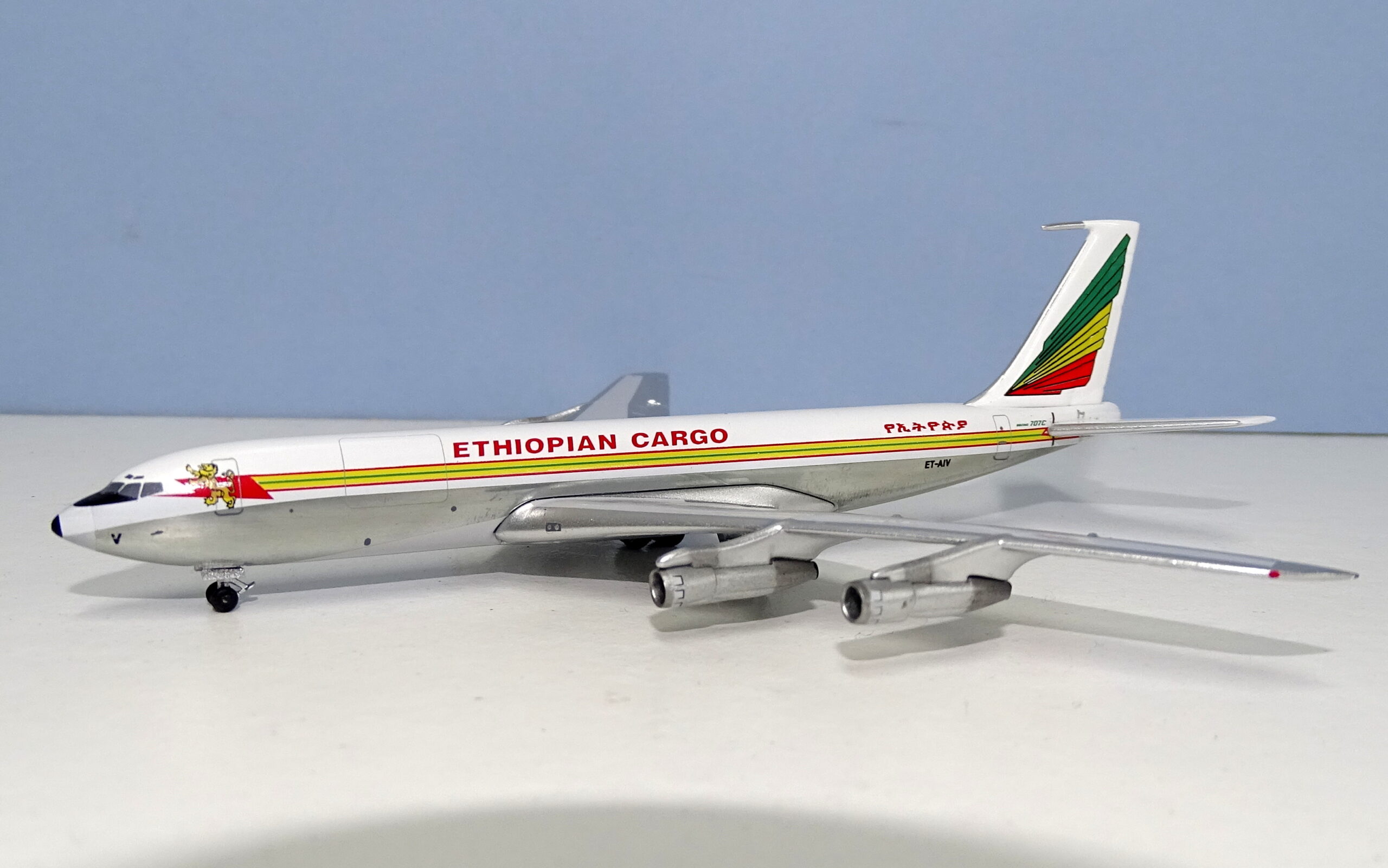 When this frame was delivered in 1985 it had all its cockpit windows still but by 1989 these were blocked out, although the titles remained saying just ETHIOPIAN. It seems that sometime in 1990 the aircraft was repainted to have the full san-serif ETHIOPIAN CARGO titles. One of the reasons I acquired this model, and not the passenger variant released at the same time, is because the cheatline without the windows looks amazing. Photos of this frame in this livery aren’t very common. As well as the one above in this post there are others such as this one by propfreak at FlickR, and this one from AirTeamImages. For a view of the starboard side the artwork used by Aeroclassics itself is illustrative:

In general, this is a good reproduction of the colours worn by the aircraft from 1990-1998. But as is often the case the finest details have rather eluded the graphic designer. The cheatline is bright and well placed but at either end it is inaccurate. Forward, although the main part of the red flash is great, and the lion looks lovely, the point of the flash ends far too early. It ought to continue to underneath the black anti-glare panel. In addition, on the real thing, the port-side cheatline isn’t exactly the same as the starboard. As you can see above the lion on the left side is behind the L1 door not across it, which is different to the starboard side. Aeroclassics has also missed this fairly obvious detail. 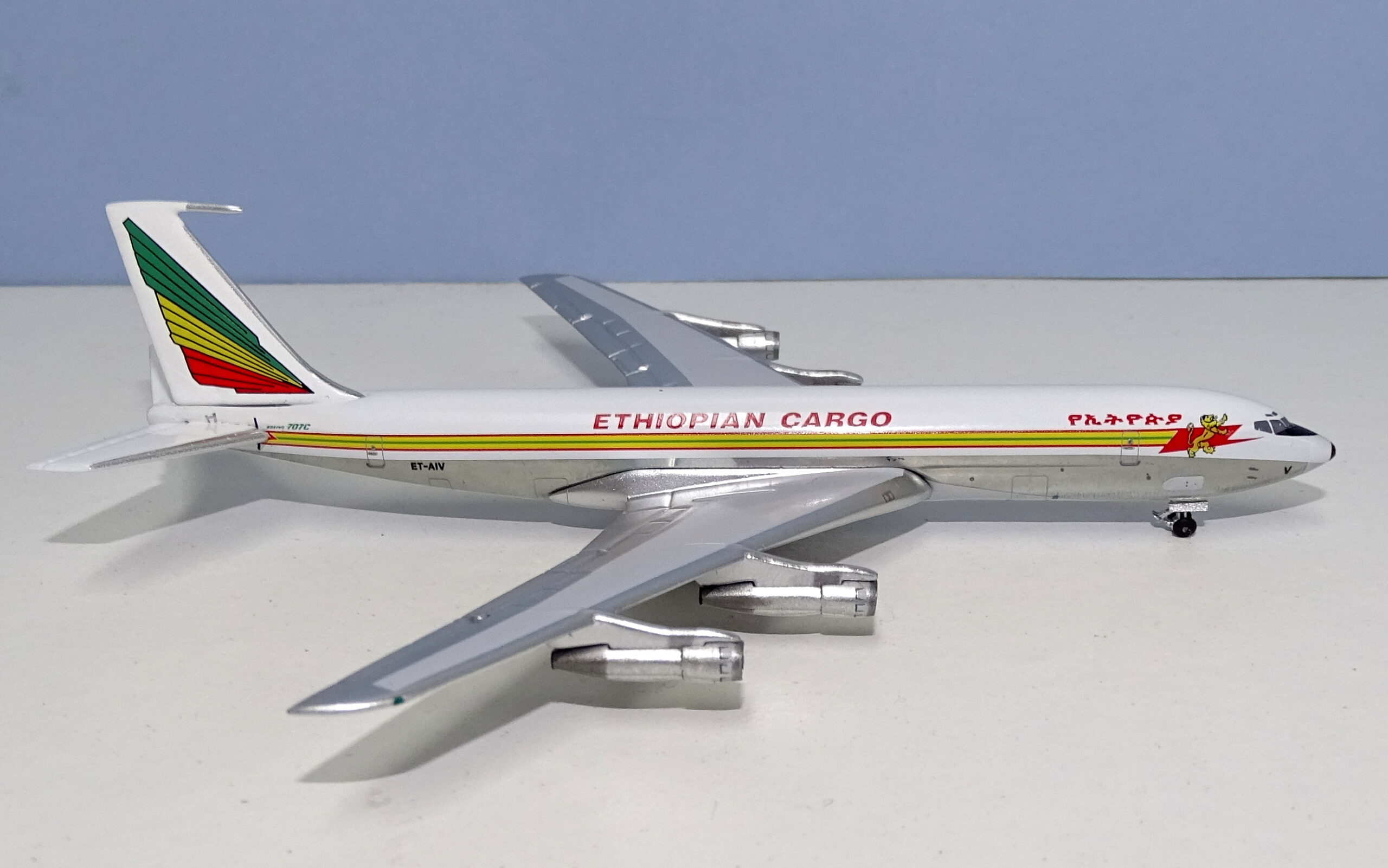 At the tail end the cheatline ironically is too long and largely merges with the horizontal stabilisers rather than showing the two pronged ending clearly. The main tail logo is well shaped and sized except for the lowest red portion, which should have four sections not three at its rear. Lastly the main titles are correctly sans-serif, unlike the standard ETHIOPIAN titles on passenger jets, but have been slightly italicized when they should not be. 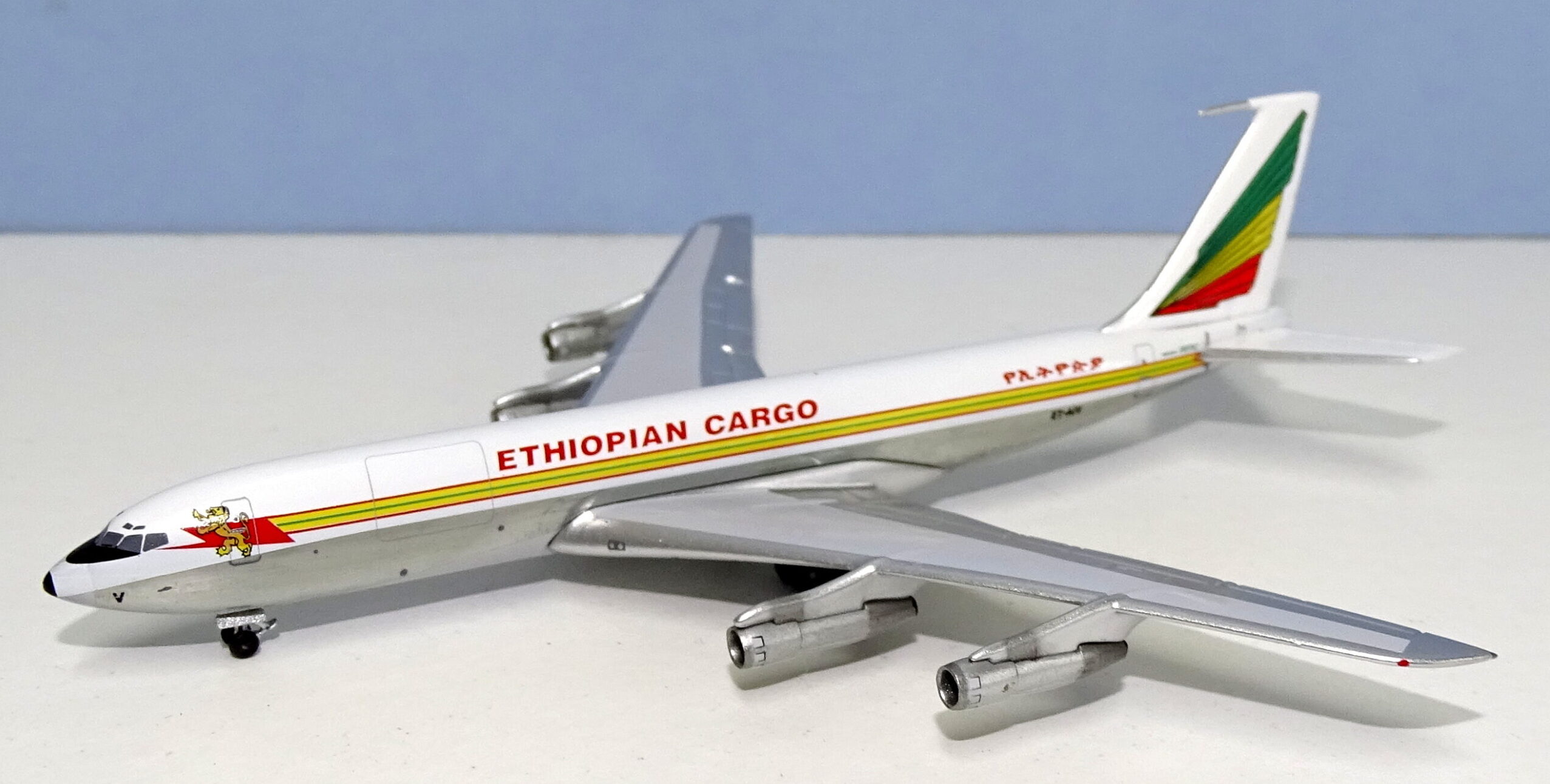 The natural metal belly is a triumph and has the registration correctly at the rear, the V at the front and a grey lower nosecone portion. From a colour perspective the red is a bit light and the green a bit dark.

Aeroclassics lets the mould do much of the talking when it comes to details and gets away with it as the wings and engines are beautifully etched. With all the windows and most of the doors blocked out you can’t really see them on the real aircraft so it makes sense not to try and outline them on the model. I agree with this approach as it is too easy to make them look like real windows by accident at this scale. 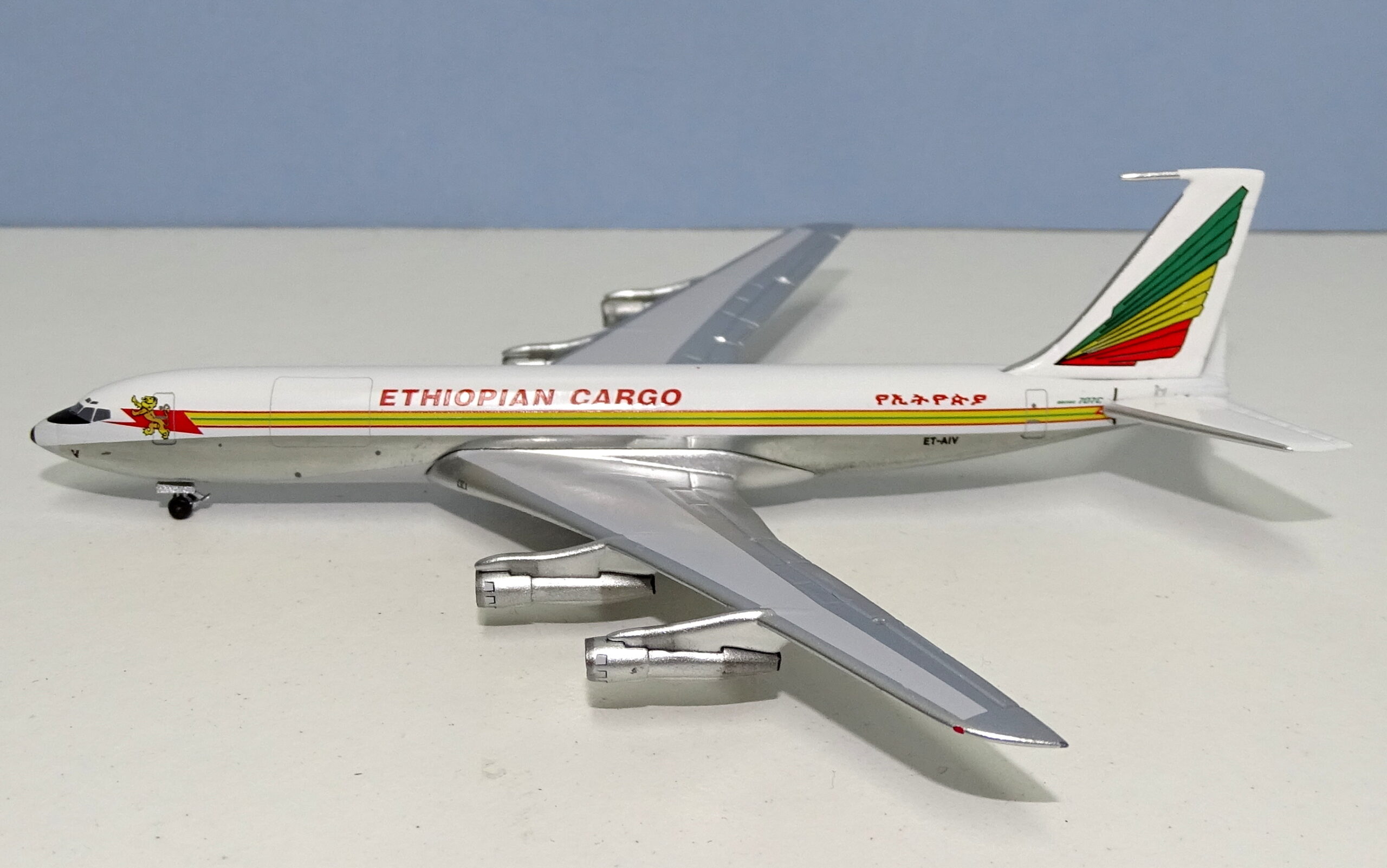 One printing detail that is missing are the two light grey notches at the lower edge of the side cargo door. These are obvious even at distance and one of the best ways to tell a 320C from a 320B at distance when the door is often hard to see itself.

Construction quality is very good. Aeroclassics 707s can be prone to losing nosegear tyres but this model is precisely put together.

I actually thought this model was going to get an excellent score and despite getting only 24 it is still a nice example of an Aeroclassics 707. The detractors, that mostly impact the livery, are a selection of small points but nonetheless they are imperfections that a more caring eye would have picked up on. Once again Aeroclassics has not been able to go the extra mile and make this aircraft near perfect and is guilty of just not paying enough attention. They can and should be doing better, but the collector is faced with the reality that only Aeroclassics is ever going to make this aircraft / livery combo in 1:400 scale. It is available in 1:200 however, and Inflight didn’t make any of the livery errors.

As 2019 moves into its last quarter there aren’t many major airlines that haven’t made their re-equipment choice between the Boeing 787 or Airbus A350. Of course, if you are one of the Chinese majors […]

Panda Models seems to have discovered the rest of the world outside of China in 2018 and they also appear to have been chided by competition into developing their own Airbus A321 casting, presumably in […]

Throughout 2018 Panda Models have taken a move away from their traditional Chinese heavy production however their new material has focused heavily on either releases for the Indonesian market or four major European carriers (Easyjet, […]