Modern graphics and application technologies have opened up a range of exciting possibilities for airline liveries. Too often these are ignored in favour of blandness, for example recent offerings from Lufthansa and SAS are uninspiring to say the least. However, 787s seem to, in general, fare better than A350s when it comes to attractive schemes being applied. Certainly, the new Air Tahiti Nui livery is a touch above the normal and avoids the ‘all-white fuselage with a flash of colour on the tail’ style that is becoming almost universal. NG Models have an eye for these attractive schemes and here competes with previous efforts from Phoenix and Gemini Jets.

One of the delights of living in Auckland is that, as the largest Polynesian city in the world and a regional hub, it receives attention from the range of exotic smaller airlines that, have survived the turbulence of the past 30 years to, continue to serve their Pacific island nations. Air Vanuatu, Fiji Airways and Samoa Airways all serve Auckland and from further afield so does Air Tahiti Nui. In fact, Air Tahiti Nui serves only four destinations in total, from its home airport of Faa’a International at Papeete on the island of Tahiti Nui.

Connecting the small French territory to the rest of the world involves flights to Auckland, Tokyo and Paris via Los Angeles, with a fleet of four new Boeing 787-9s. Regional services are left to Air Tahiti, which utilises a fleet of ATRs and DHC-6s. Air Tahiti Nui’s role is to focus on bringing inbound tourists to Tahiti from key global markets. This has not always been an easy task to achieve.

Formed in 1996 the carrier was never profitable in its first 15 years. It came close to bankruptcy in 2011 following a 40% fall in visitors, due to the global financial crisis. Since Tourism accounts for 25% of Tahiti’s GDP letting the airline fail was clearly not in the best interests of the island. Indeed, a voluntary levee was raised by locals to help save it. Loss making services to Sydney and New York were also dropped.

Reborn, the Air Tahiti Nui of today has been profitable for the past 5 years and partly this has been down to some astute fleet redevelopment. Since its inauguration the fleet had been based around the Airbus A340-300, however when it came time to re-equip the carrier was able to take advantage of competition between Boeing and Airbus to secure an exceptional deal for its new 787-9s, two of which it owns and two of which it leases.

The first 787 was delivered on August 10, 2018 and deliveries stretched through until August 2019. F-OVAA, named Bora Bora, was the third aircraft to arrive in June 2019. The registration has a meaning in that VAA is the word for canoe in the local language.

The 787s have proven faster and, at the same time, burn 23% less fuel than the A340s, whilst also being 35% cheaper to maintain. Along with a renewed focus on fewer but more lucrative routes the carrier stands in good stead to continue transporting tourists to Tahiti for decades to come.

NG models has now made or announced 30 787-9s and 5 787-10s. I’m not a big 787 collector but since they have started, I have acquired 11 787-9s from NG. By comparison even though they have been out for longer only 7 JC Wings 787s and just 3 from Phoenix are in my collection. The JC 787 is on par with the NG effort but rarely produced on time. The Phoenix 787 is so inferior I’d be more than willing to trade my trio of them, and the Gemini is a non-starter by comparison (being a cradle mount mould). 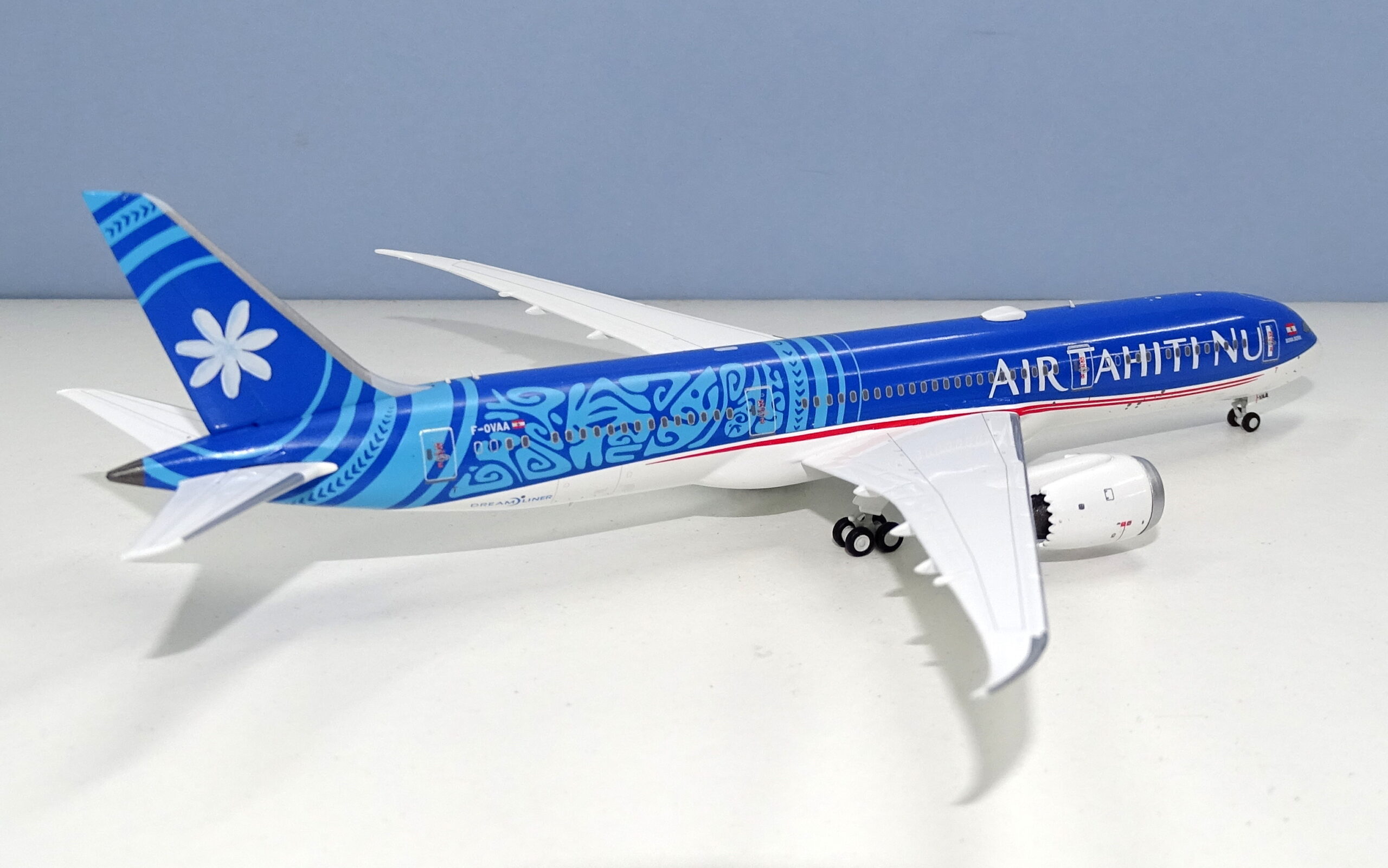 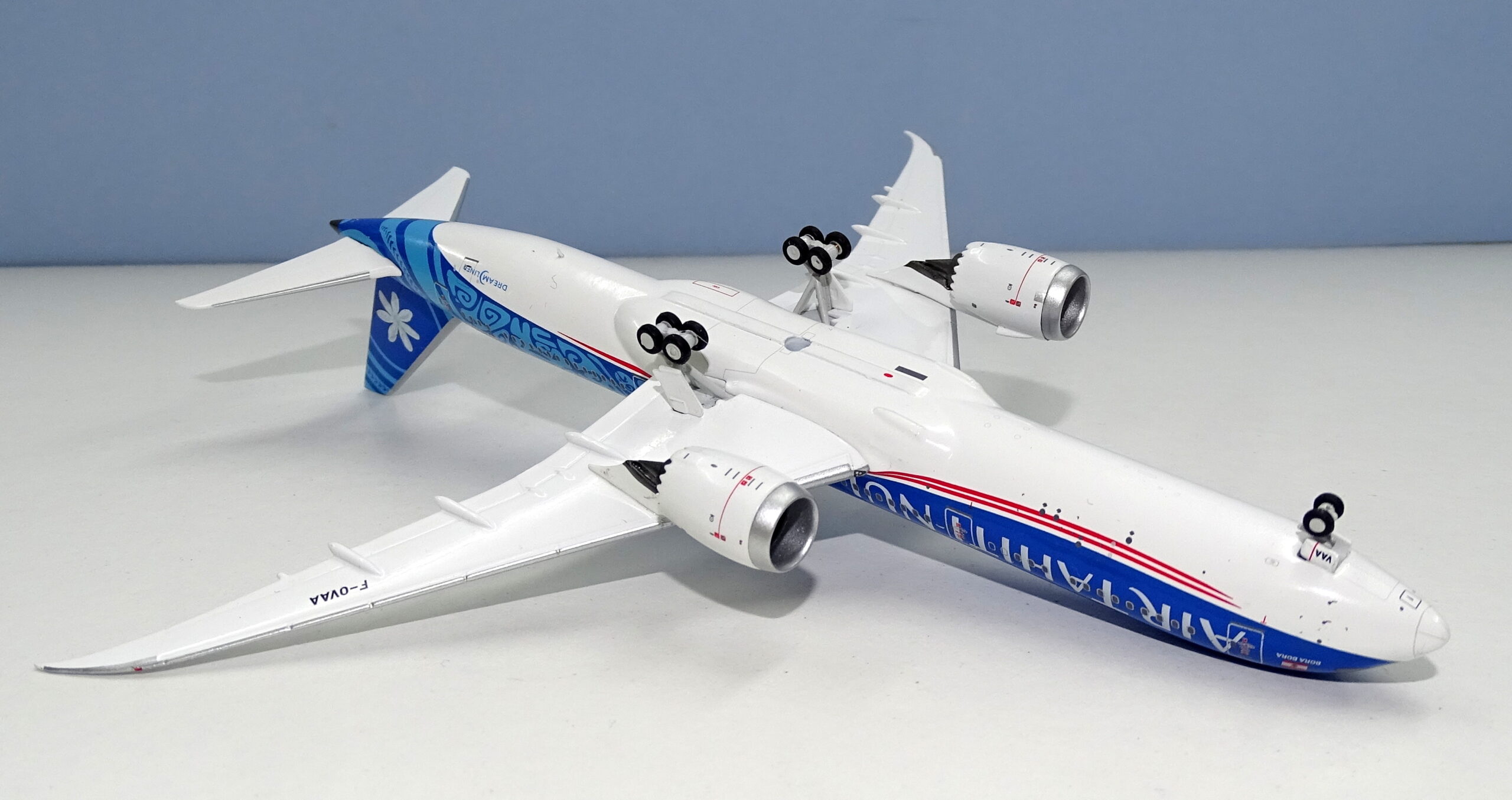 The primary area of contention, as noted by others, is the undercarriage. The NG Models mould has always had slightly taller landing gear. This gives the NG Models version much better, and more accurate, engine ground clearance but the gear length of the JC Wings is more accurate. It seems NG Models have tried to resolve this by shortening the nosegear slightly. That has improved the nosegear, but by not also shortening the maingear the model now sits slightly nosedown.

NG appear to have stopped making changes to existing moulds, partly I expect because they are busy developing other new moulds. They have not shortened the maingear and so their 787 does still sit noticeably nosedown. It isn’t enough to stop me from buying NG 787s but if JC Wings could get their models out to a reasonable schedule, I may well choose the JC over the NG.

Both the JC Wings and NG Models 787s are exceptional castings and we are lucky as collectors to have the choice between them. Given the regular JC Wings release delays the gap between the moulds isn’t big enough for me to not purchase the NG version and in this scenario that isn’t an option anyway. This mould easily beats the competition from Phoenix and Gemini Jets. 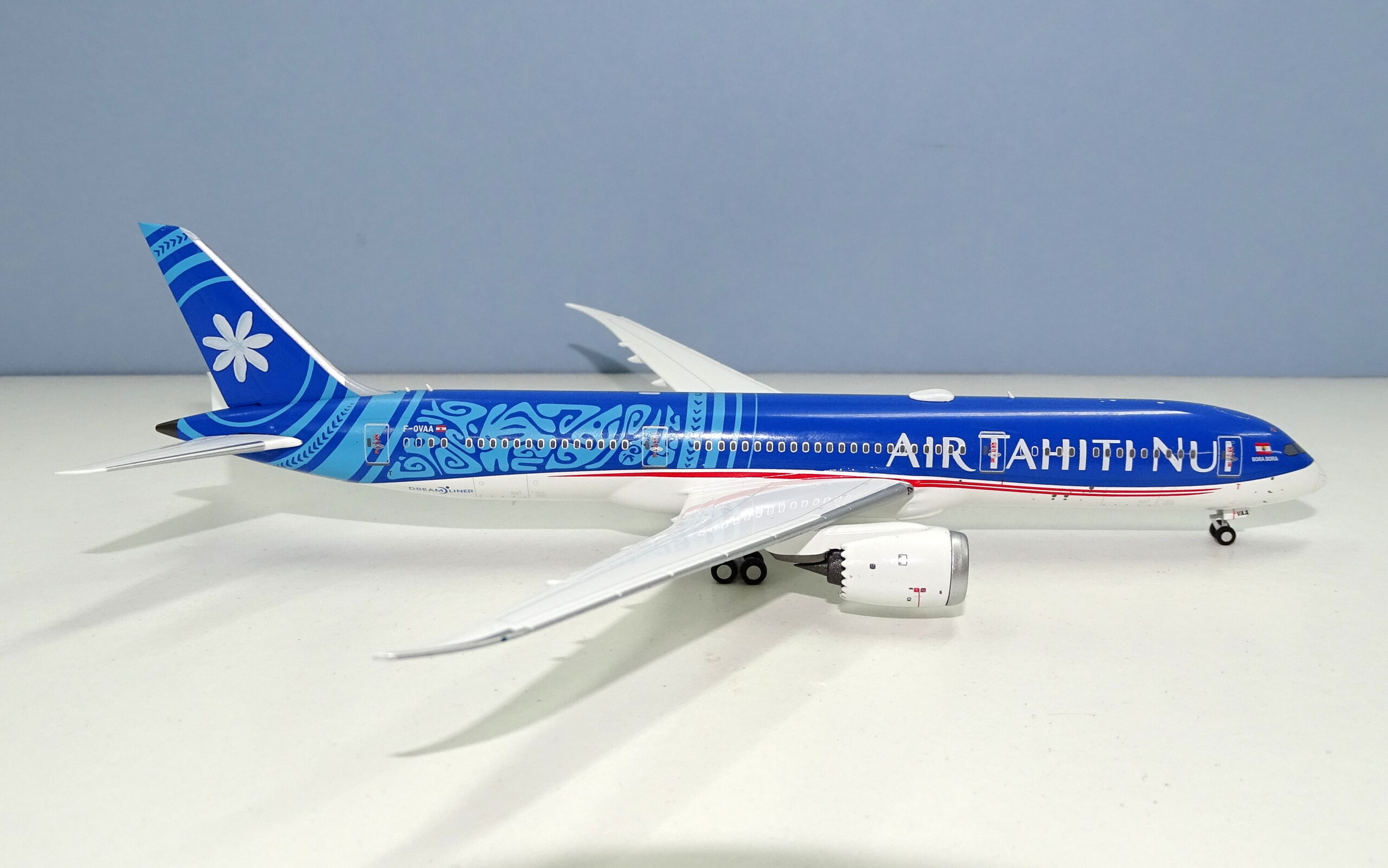 Air Tahiti Nui’s updated livery, first applied to the 787s, was part of a wider brand refresh undertake by the Australian branding agency Future Brand. Changes include a deeper ocean blue base along with two lighter shades representing the lagoon and skies over Tahiti.

The white Tiare flower logo is now surrounded by a selection of native tattoos. These feature ripples on the water, flocks of birds, an Albatross, a Tiki, fishhooks and manta rays. Each of these represents an aspect of symbolism the airline is promoting. 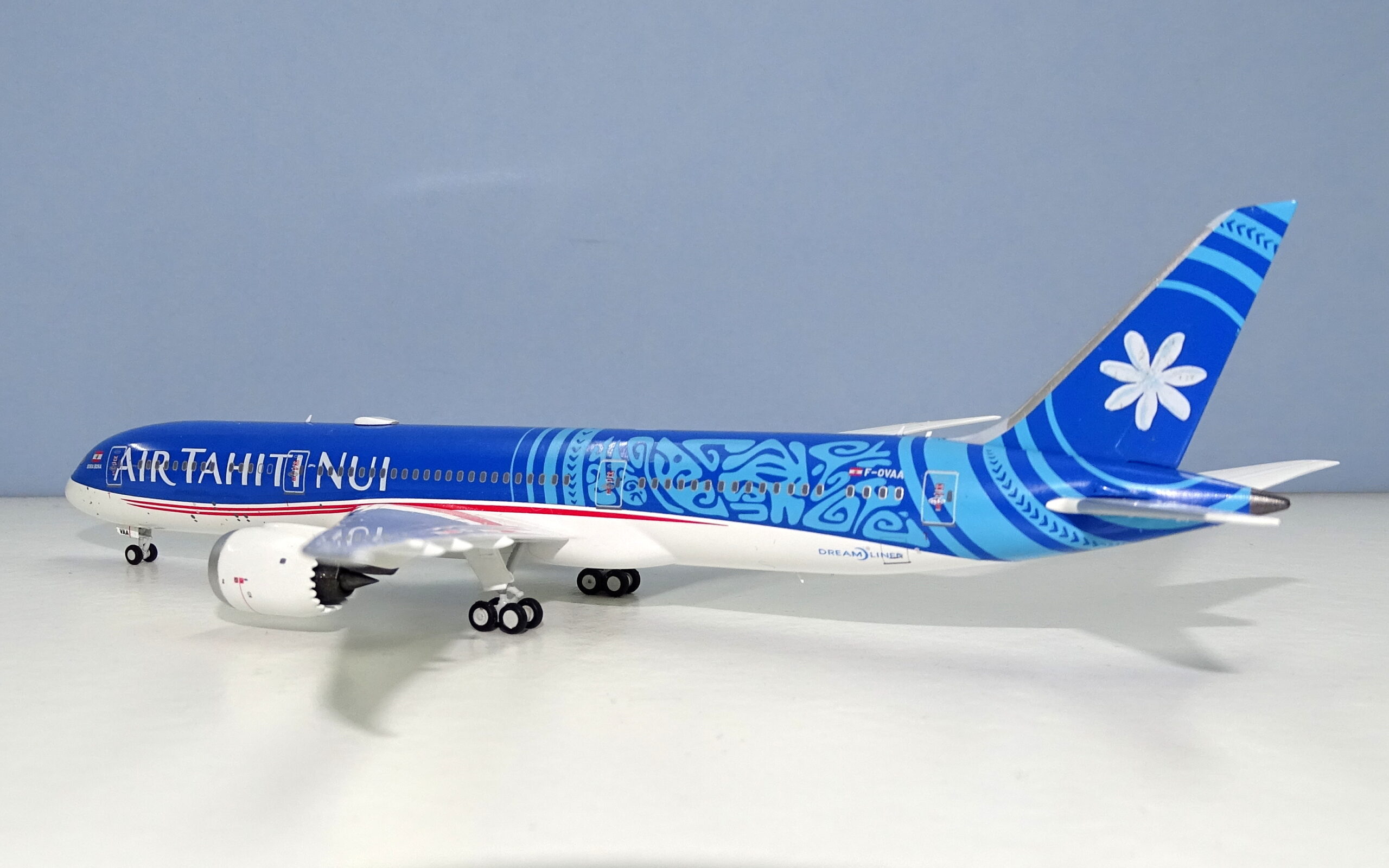 The two red lines on the lower fuselage are held over from the previous scheme and represent the Tahitian flag, itself a symbol of the 118 different islands of French Polynesia and its people.

NG Models have proven themselves exceptionally good at placement of livery components, something that is vital in such an intricate design. The colour bands and tattoos are placed mm perfect across the entire model. The printing of the Tiare flower is especially intricate as the petals are far from symmetrical and NG’s shading on them is wonderful. 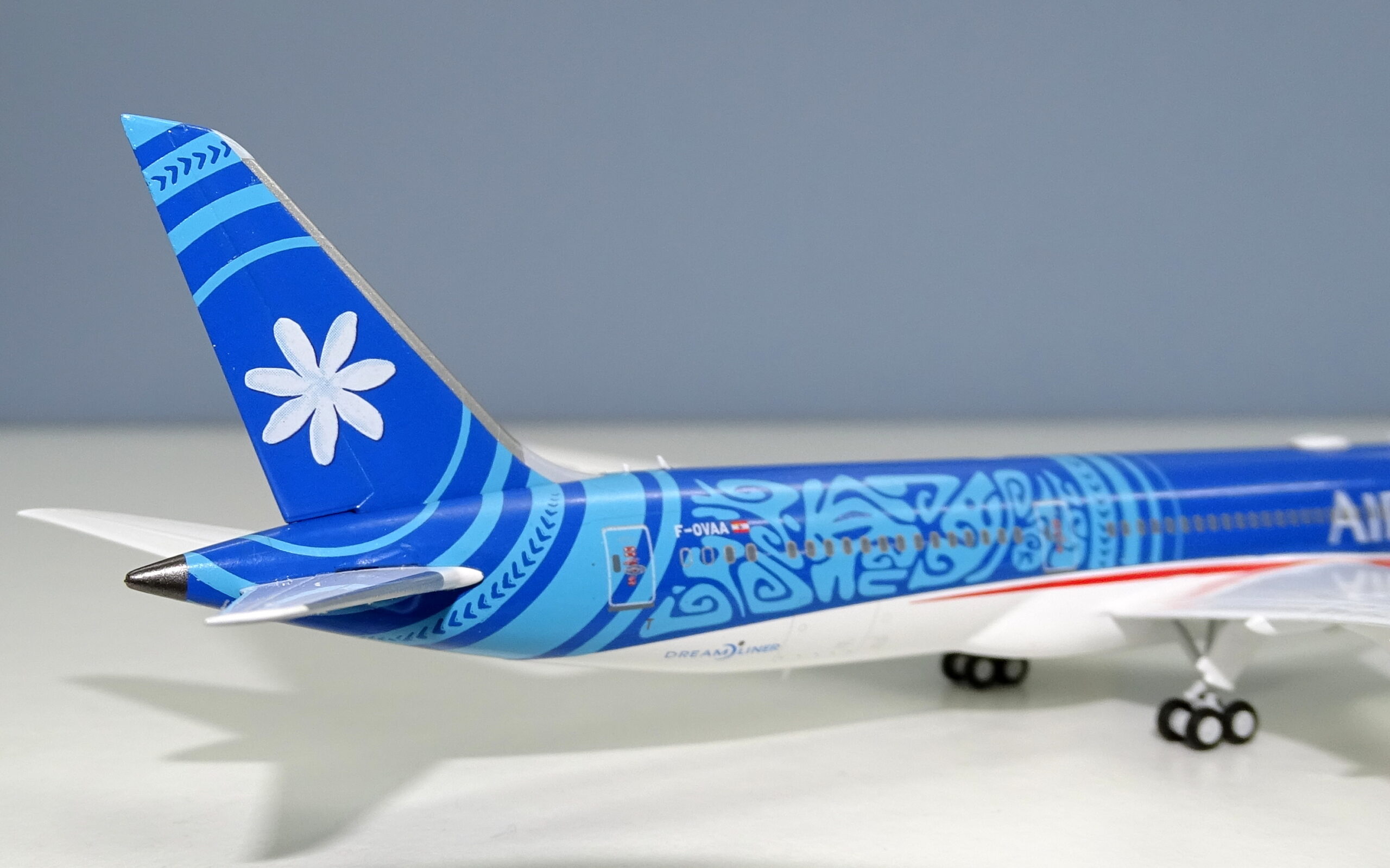 The tattoos themselves are printed in great detail, although I can’t really tell which one is an albatross and which a turtle! Fortunately the image above explains that. In some shots the aircraft looks a little lighter blue than the model (see this photo for example) but when you compare to closer shots the richness of the blues matches the model. 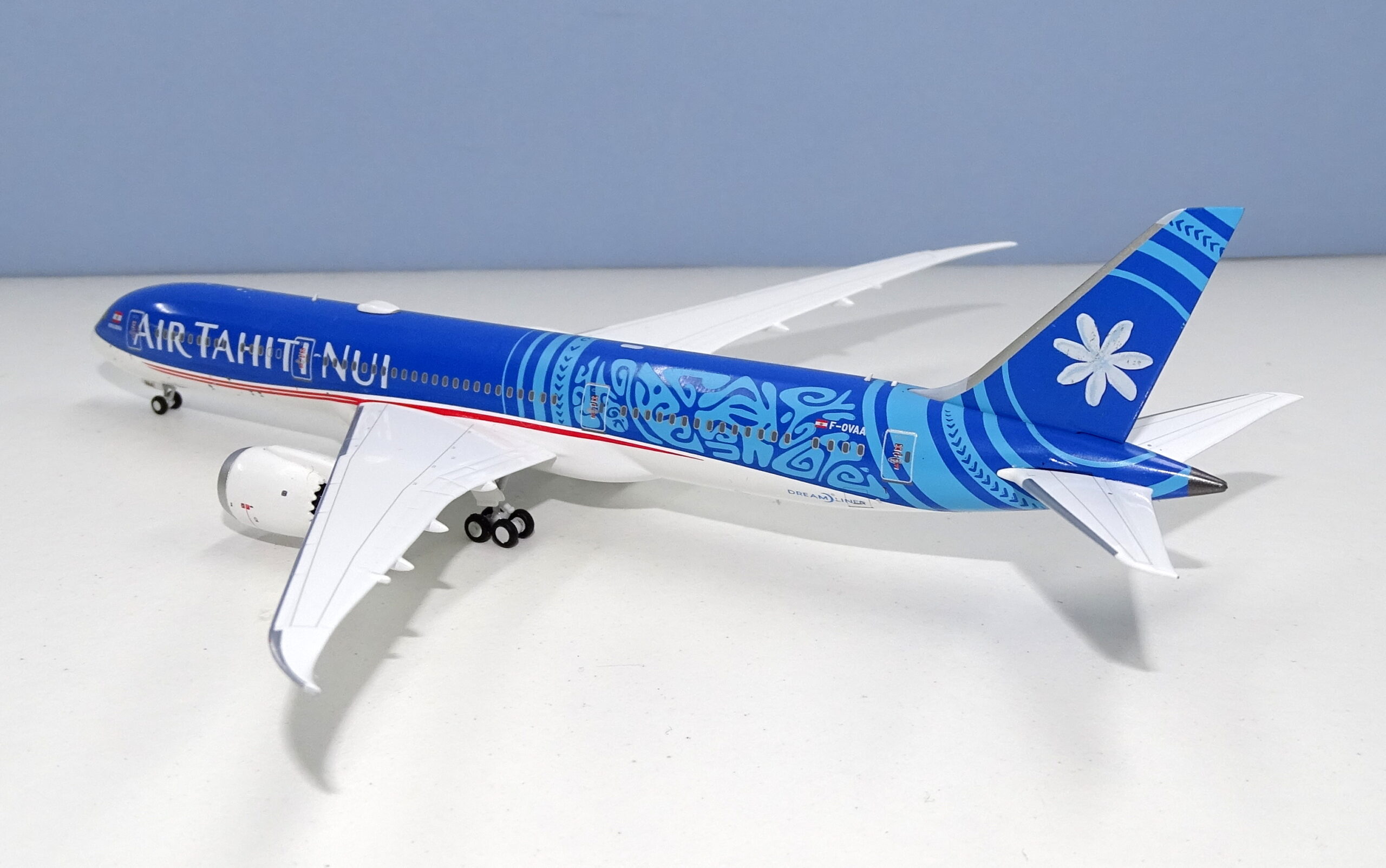 I haven’t really got any criticisms to make of the livery application. To be fair Phoenix and Gemini also appear to have performed strongly in this area judging by photos I have seen.

Printing and paint quality are first rate as I have come to expect from NG. Printing of radomes and engine details is as strong as ever, however as is standard with NG 787s the cockpit windows could do with some work. The pattern being used on the template just isn’t correct. The middle windows are not quite level enough and the outer window pair are too small and lack the right shape on their underside. As with the maingear it isn’t something that damages the model especially but it is inferior to JC Wings standard cockpit print.

There’s nothing to report in terms of build quality. Everything is fitted tightly and well. NG have made a habit of doing the simple things right and the hard things right as well!

This model fits the emerging pattern with my reviews of NG 787s to the extent I will avoid reviewing another for some time to come. In effect aside from the maingear length and cockpit window shape the recreation of this attractive airliner is near flawless. Of the 9 models I’ve reviewed this year only 4 have scored more than 26 and 3 of those are NG Models. As a total package they continue to be streets ahead of the competition.

August is here and so are the latest release announcements from Inflight200, WB Models and JFox Models. We take a look at the lineup of new releases as well as the models which are likely […]