Production of the Airbus A350 has been one of the most competitive areas in 1:400 scale over the past year. The arrival of Aviation400 has really pushed JC Wings and Phoenix, as most of their A350 releases overlap. Phoenix continue to plod along seemingly oblivious, but JC Wings have proven more agile and updated their A350. This is the first time I have had a chance to see the updated mould in the zinc, so to speak.

Prior to the outbreak of the Coronavirus China was well on its way to becoming the World’s largest aviation market. It is therefore no surprise that the major alliance networks have been active in the Chinese region. What is perhaps surprising is that given the power of the Chinese mega-carriers it is somewhat surprising that it wasn’t until 2007 that any Chinese airlines joined an alliance (Cathay Pacific had of course been a founder member of Oneworld in 1999 but Hong Kong isn’t the same as the People’s Republic).

The first to pick an alliance was China Southern, who joined Skyteam. Air China and Shanghai Airlines meanwhile chose the rival Star Alliance. It wasn’t until 2011 that the other member of the big three, China Eastern, selected an alliance. Somewhat surprisingly it also picked Skyteam.

Oneworld has had to be content with its regional membership limited to Hong Kong’s Cathay Pacific and Dragonair / Cathay Dragon, which although both having strong ties to markets within the PRC are not in the same league as the big three Chinese carriers. There was historically talk of Hainan Airlines (China’s No 4 airline) joining Oneworld but this was before its parent HNA group got so incredibly out of its depth. The impacts of the Coronavirus now look like they’ll be terminal for the HNA group. The future of its many airline subsidiaries remains unclear.

Even within the Star Alliance and Skyteam side there has been a surprising amount of movement. In 2010 Shanghai was taken over by China Eastern and later that year it left Star Alliance for its new parent’s alliance Skyteam. It has not all been good news for Skyteam though, as China Southern recently left the alliance and has strengthened its ties with American Airlines, making a Oneworld membership look increasingly likely.

Air China demonstrates its Star Alliance membership across several of its fleet including the new A350-941 B-308M, which was delivered on May 28, 2019. She is the last of ten A350s delivered to Air China. Although the current disease scare is no doubt proving a bitter pill for China’s airlines to swallow, the rise and dominance of carriers like Air China seems unstoppable over the medium term. As such its importance as a Star Alliance member can only grow.

This is the first time that I have reviewed a JC Wings / Gemini Jets A350 since the very first review I did and the mould has been modified to change the most heavily criticised area of it – the nose region. There is no doubt it is a significant improvement. Gone is the Roman nose-esque curve and in its place an accurate style nose with the change in angle from the bottom of the cockpit windows to the nosecone well established. It looks very good and is arguably the best nose in a 1:400 A350 in 2020.

The JC Wings A350 has always had good engines and pylons although the last stage of the exhaust cone is a little too long. The fanblades are also nice and better than the competition, albeit there are too few actual blades, they are at least a more sensible thickness. 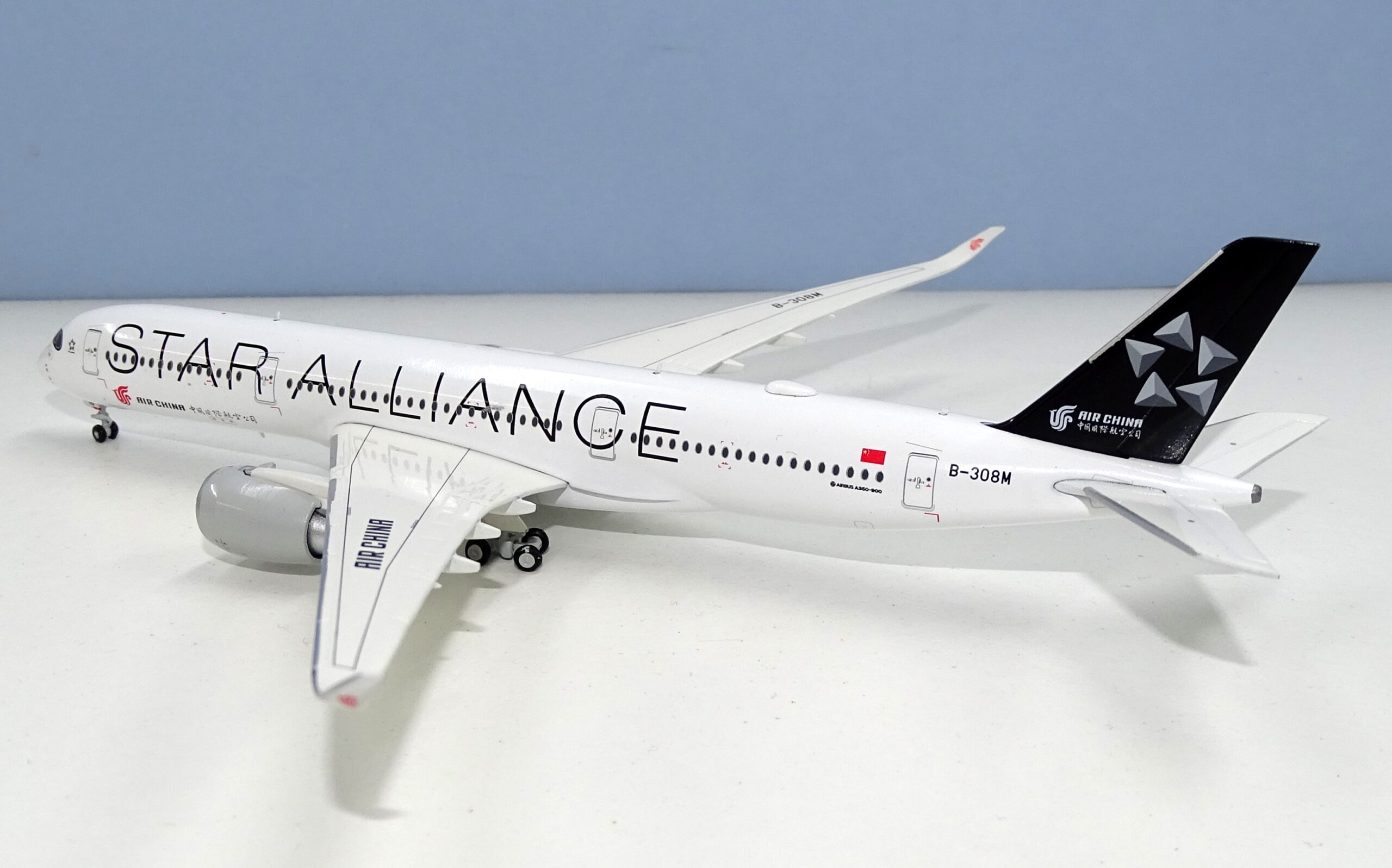 The rest of the fuselage is very nice. The tailcone and vertical stabiliser are very well shaped and once again the best in 1:400. One area that is a little disappointing is the landing gear, which I consider to be slightly too short. Detailing on the gear itself is good but the maingear trucks are a little simplified to allow them to move as a unit. 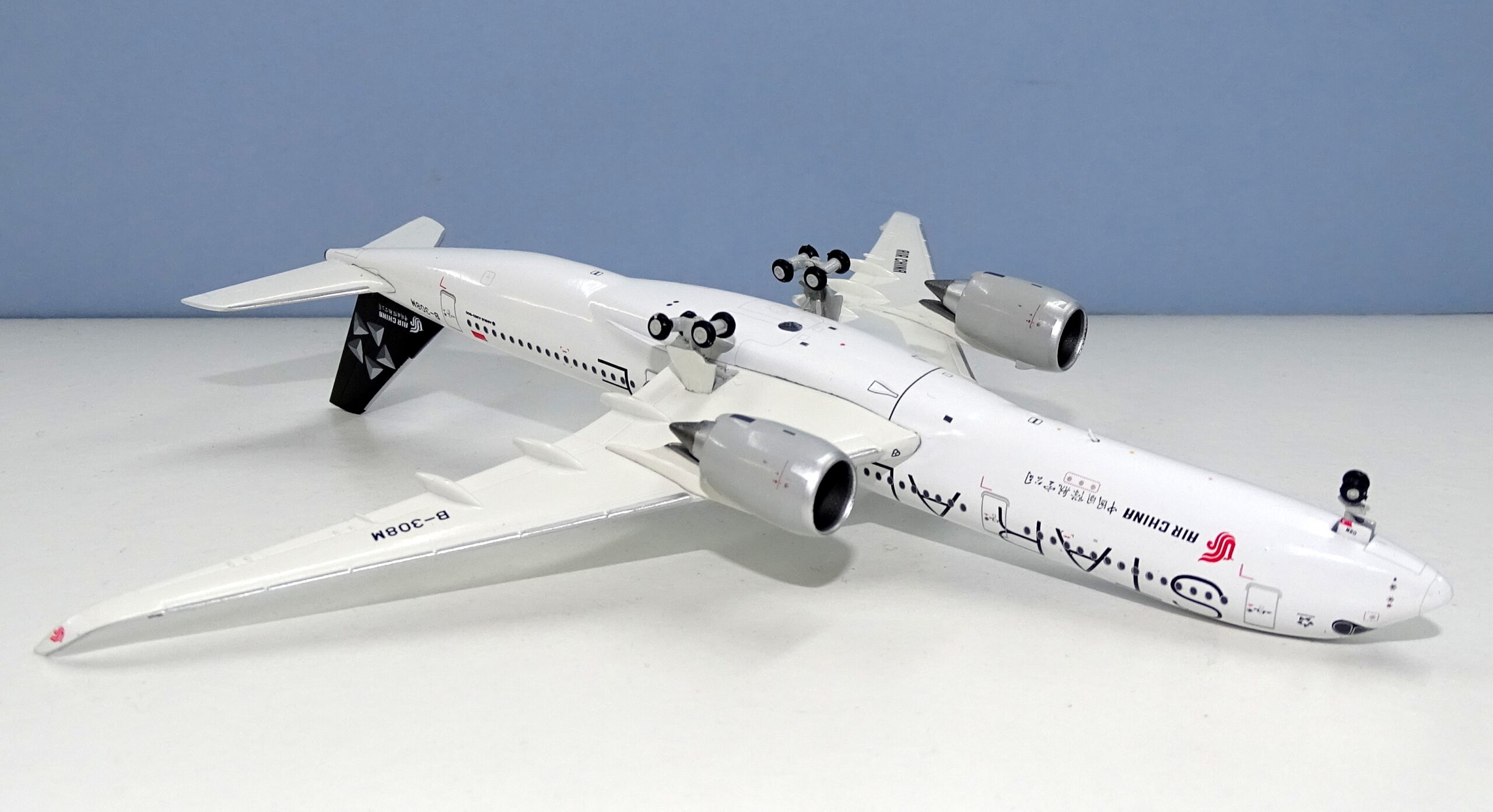 The wings are good (and I should mention that this is the flaps up version of the model) but the wingtips do not look like they have been updated to take into account the larger winglets of the improved A350-900. Nobody else has remodelled their wings for this feature either but surely they are going to need to at some point? 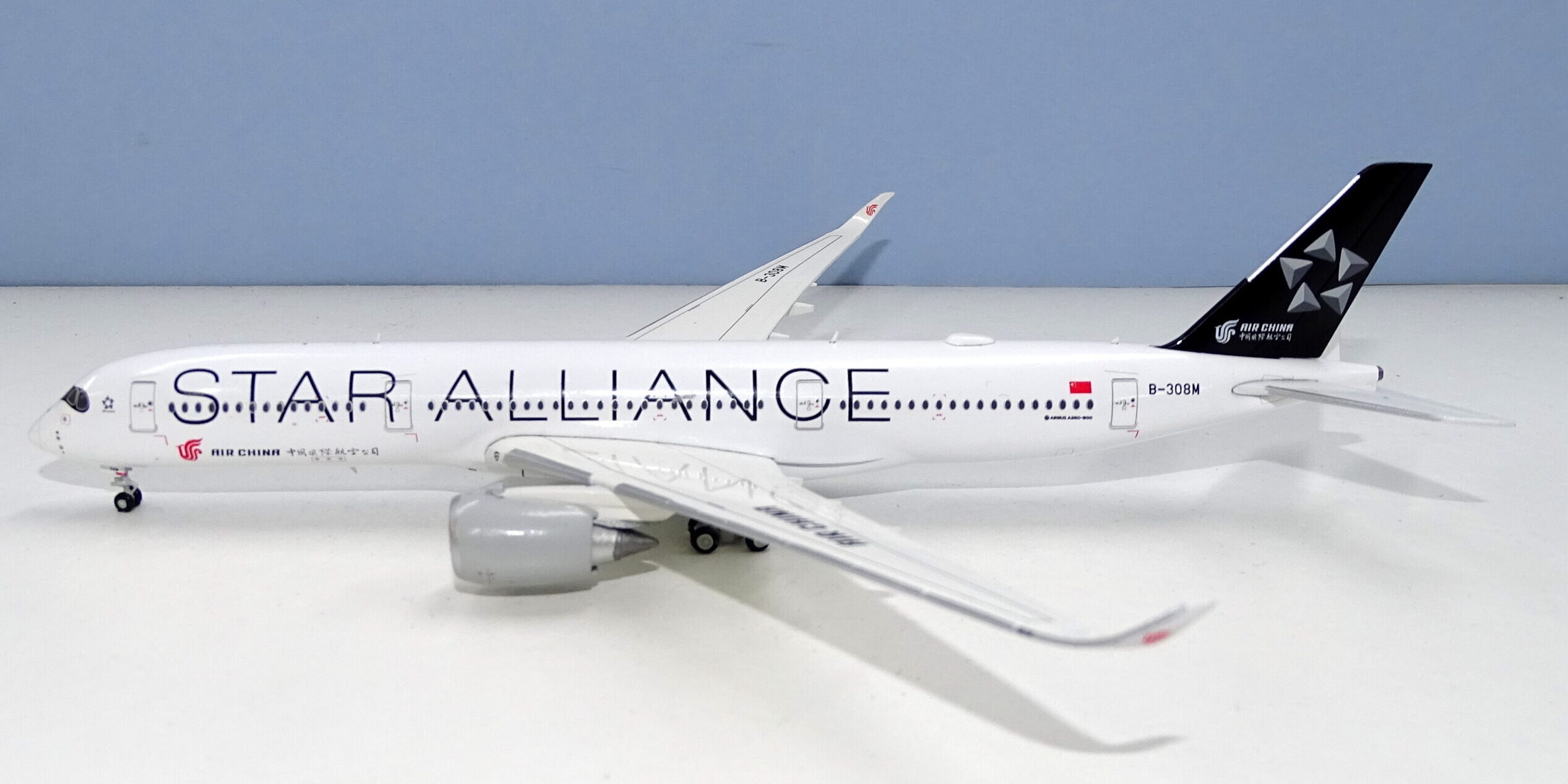 In terms of detailing the model has four aerials (3 atop the fuselage and one underneath forward) and misses the smallest underside rear. The fuselage top bumps are absent at the forward and middle roofline but the larger dome is present and well-shaped at the rear.

From a purely mould perspective I think this updated mould is as good as the Aviation400 version. In fact, it may even be slightly better although I do prefer the undercarriage of the AV400. Compared to the Phoenix mould this updated version is substantially better and should give JC Wings, and presumably Gemini Jets, a strong competitor against Aviation400 and the upcoming NG Models A350.

Long gone are the original Star Alliance colours, which featured a rectangular panel for each airline in the alliance along the side of the fuselage. Nonetheless the standard Star colours are surprisingly classy with a black tail and tri-colour grey star logo. With black, white and grey as your base it is hard to muck up the colours. Even so arguably the greys on the tail are a little dark, as are the engines. 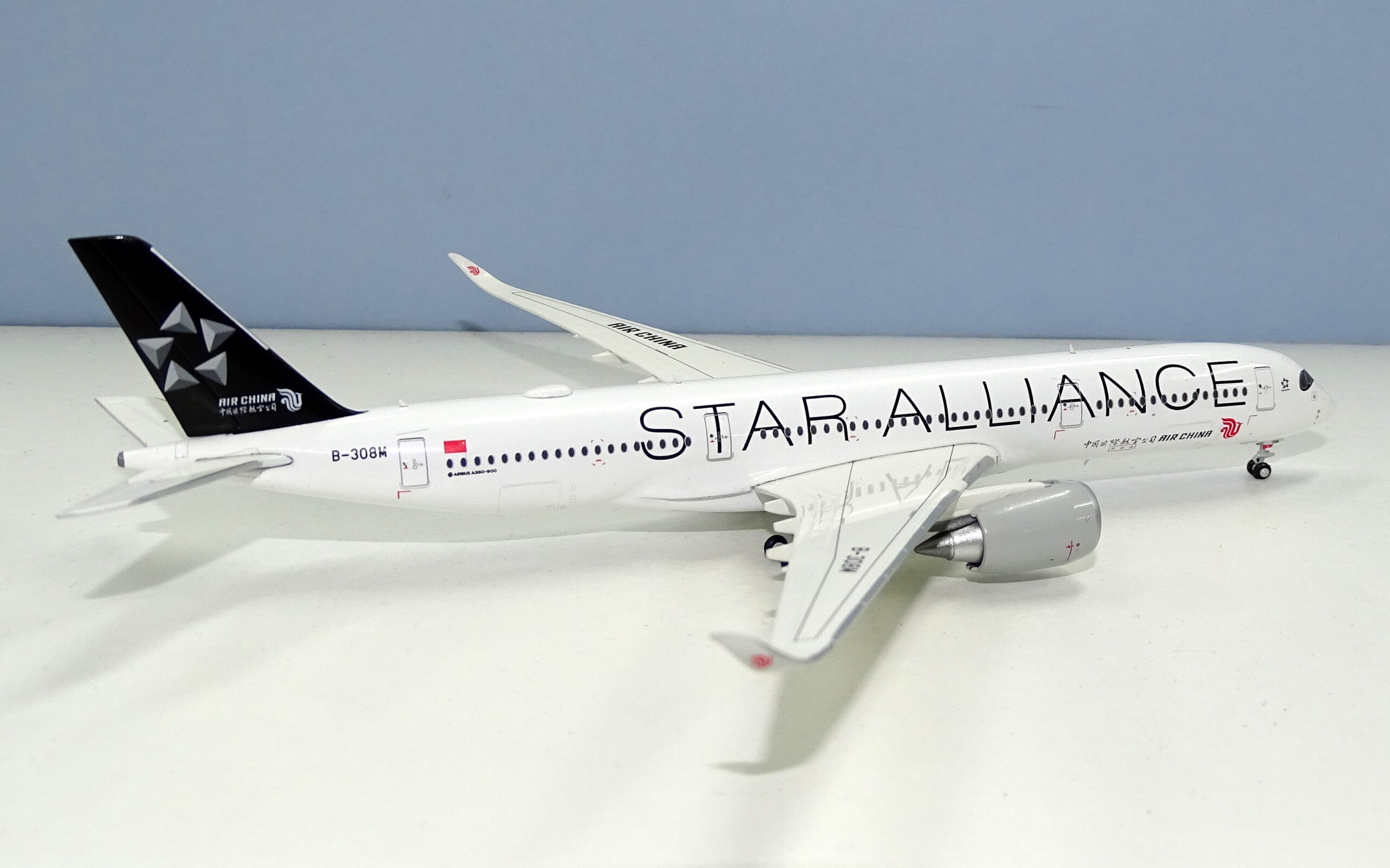 The main titles are well placed and use the correct font. The Air China titles appear correctly on the lower forward fuselage and the VIP / Phoenix logo is on both sides of the winglets. 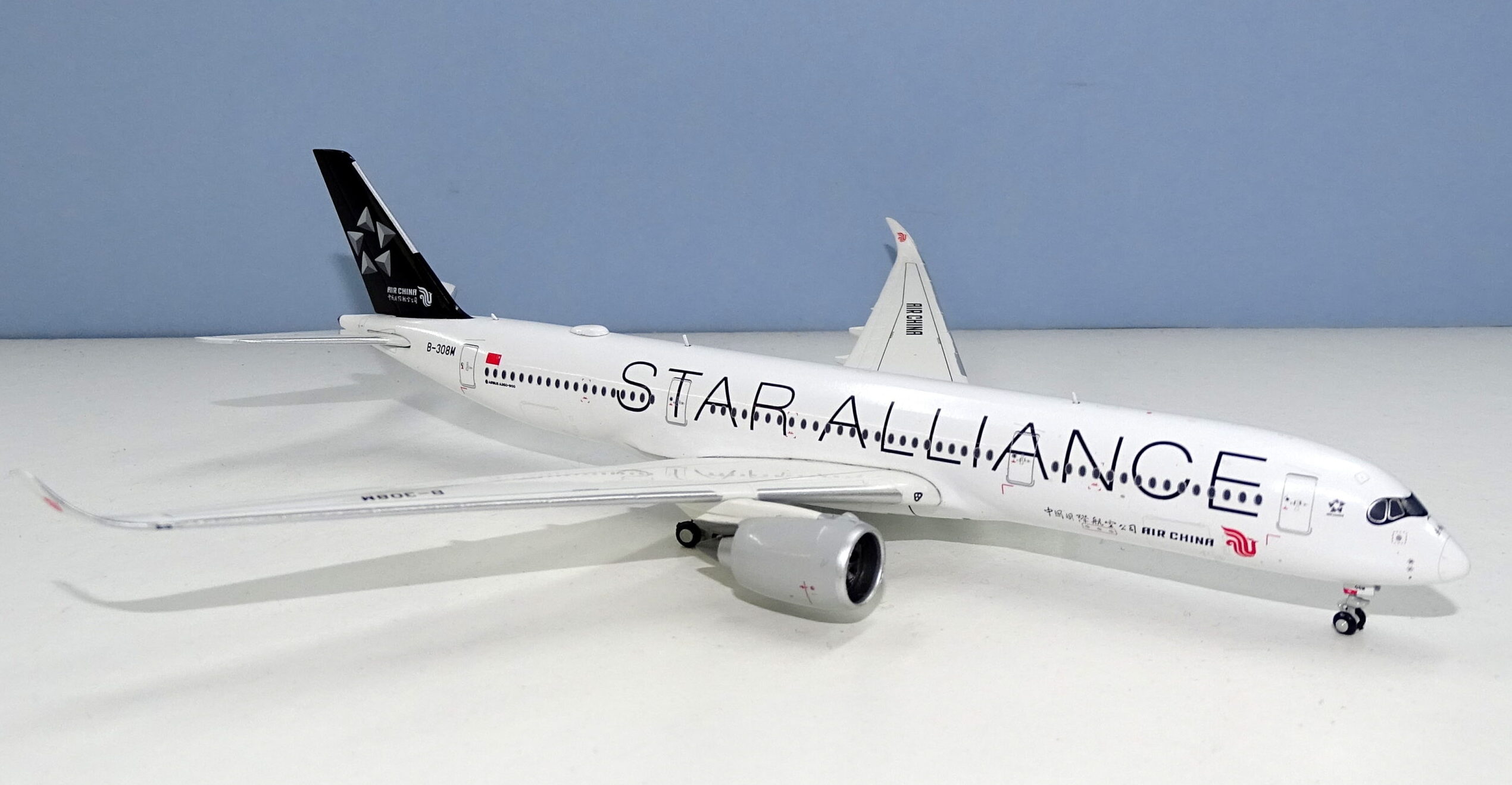 There isn’t much more to be said. It’s a hyper-simple scheme, although I’m minded to knock a point off for the greys.

I have noticed something in recent times with both JC Wings and Gemini A350s. That is the cockpit windows. They just don’t look right and it is because they angle too far down at their lower edge giving the aircraft a rather sad look.  You can tell most obviously by comparing the bottom line of the two outer cockpit windows. They should be roughly level with each other but on the model the outermost window is a lot lower than the second outermost. This bothers me quite a lot and is almost enough on its own to buy the AV400 version over this one.

That is a major shame as the mould itself is great and the rest of the printing excellent too. Line printing is thin and crisp, and detail is fantastic. Unfortunately, painting isn’t always up the standard of the printing. The paint on the exhaust of the left side engine is super sloppy and to top it off the engine exhausts are grey rather than the metallic blue they ought to be.

The build quality of the model is almost perfect except for one thankfully largely hidden piece of sloppiness. The starboard side engine fan blade, which is a circular ring of plastic with the blades inside it, is not properly fitted inside the engine. It sits at an odd angle and so is further pushed in on the outer side than the inner.

This review is a triumph for the new JC Wings A350-900 but not a triumph for JC Wings painting and quality control processes. To be fair they have been a lot better than they used to be, which makes the sloppy painting and fan placement something of a surprise. More of an issue for me is actually the shape of the cockpit printing, fix that and I’d be a regular purchaser of JC A350s. That is if they could compete with Aviation400 for release schedules (AV400 are no saints in this department but usually quicker than JC still).

Flower of the Sky: Hawaiian Airlines Airbus A330-200 N361HA by Gemini Jets

Hawaiian Airlines has a strong corporate relationship with Gemini Jets and there is rarely a month that seems to go by without there being some kind of release of a Hawaiian model from GJ, which […]

Is it 2018? Aeroclassics certainly thinks so as January’s releases have been already announced. Aeroclassics often balances the modern releases of its Airbus moulds alongside the traditional classics offering and it is a challenge to […]