As with their 787 the NG 737 has received some stick, whilst easily being the best 1:400 scale 737NG ever produced. Nowadays NG Models is Boeing licensed, which no doubt helps to fend off Gemini Jets, but it is still not licensed to make Qantas models. This doesn’t seem to have caused them any particular issues and, considering the quality of the releases to date, it shows the realities of licensing. It is of no benefit to the collector, or at best a blunt tool, and more of an extra revenue stream for the airline and airframe manufacturer. Licensing certainly never plays a part in my purchasing decisions, so without further ado let’s look at this model.

The relationship between the principally white settlers of Australia and the native Aboriginal population has been one of exploitation, theft and effective extermination. However, despite the lack of redress, and continuing marginalisation of Aboriginal populations, aspects of Aboriginal culture have become popular in the mainstream. Qantas, an important standard bearer for Australia’s image abroad, has done much to this end by showcasing Aboriginal artwork on five of its fleet beginning of course in 1994 with Wunala Dreaming.

Qantas has worked with the Balarinji design studio to create each of its flying billboards. The first pair were featured on 747s but the next two both graced Boeing 737-800s. Yananyi Dreaming was designed by Rene Kulitja, a Pitjantjatjarra woman from Mutitjulu, near Uluru. She depicted her local environment and represented her experiences and family traditions.

Qantas chose the Boeing 737 Next Generation series for its fleet renewal programme in the early 2000s to replace the previous generation 737-300/400s. The initial order was just for 15 frames but the current fleet stands at 75 series 800s. The first aircraft delivered was VH-VXA, which arrived on January 14, 2002. She was followed two days later by VXB in the Yananyi Dreaming scheme. She arrived at Sydney on February 14 and was put into revenue service on the 16th operating between Sydney and Melbourne.

As per usual with these kinds of schemes the effort to finish it was monumental, requiring 484.5 litres of paint, over 2,000 man-hours and six days. Two hundred large plastic stencils were used for the overall design with another 63 nylon stencils created for more intricate design elements.

Qantas has never had all the Aboriginal aircraft in the fleet at one time and VXB wore her special colours for just over 12 years. She was ferried for repaint on September 8, 2014 and returned to service in standard colours on September 24 operating Darwin to Sydney. 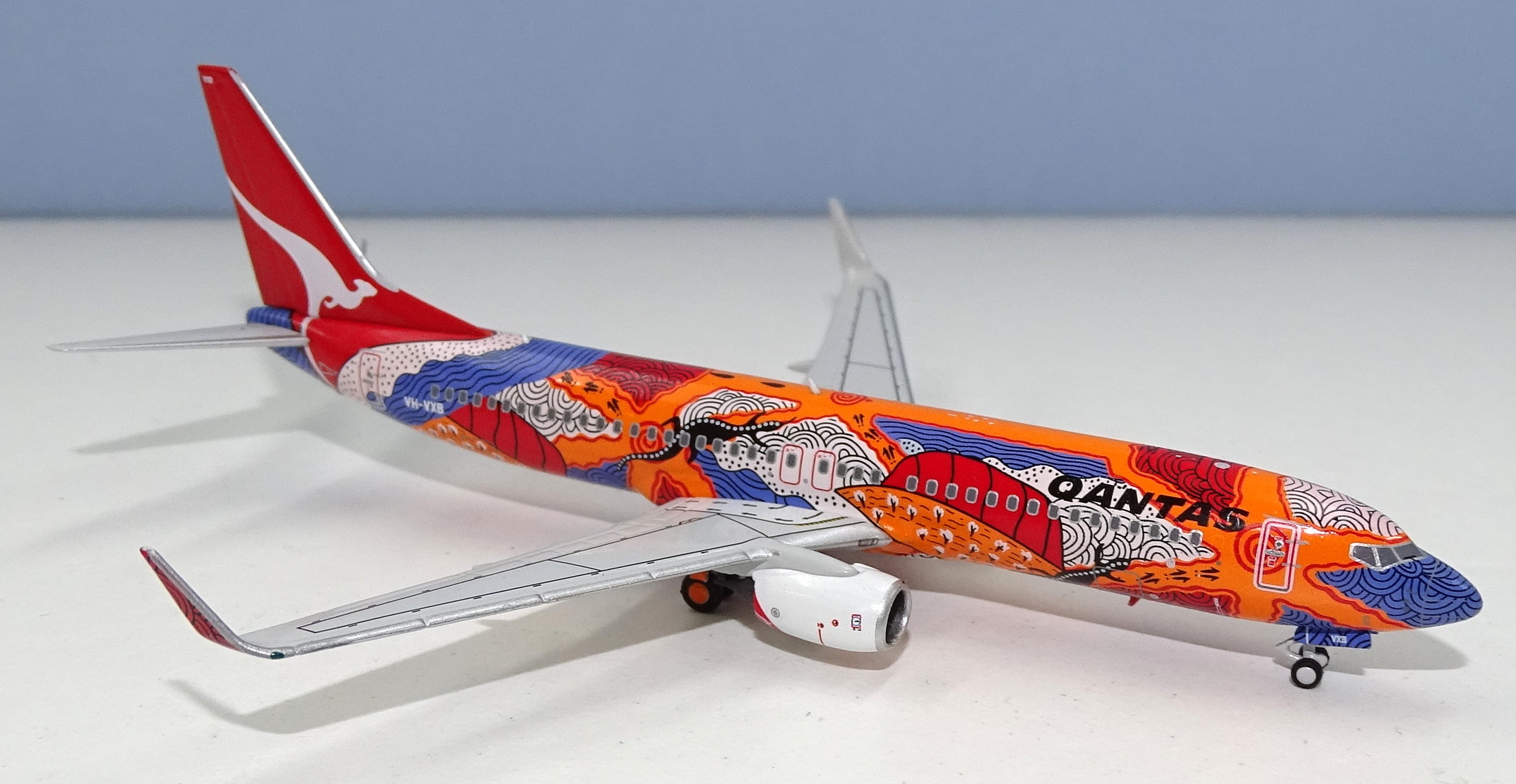 There is absolutely no contest when it comes to this being far and away the best 737-800 ever made in 1:400 scale. It actually introduces a problem for me as should I replace all my older 737-800s as new models come out? I’m holding off for now – mainly because I’m actually ok with the Panda mould, which makes up the majority of them.

The most difficult areas for all the existing moulds has been the cockpit/nosecone and the engines/engine pylons. The NG mould has a beautiful and accurate transition from cockpit to nose perfectly capturing the classic traditional Boeing shape.

The nosegear tyre and gear leg are well detailed and proportioned whilst the nosegear doors are a hallmark of attention to detail. Unlike most of the moulds, which have large rectangular slabs, these doors are the right size, angled properly, fit tightly to the fuselage and are not inset into it. They even have rounded upper corners like the real thing. 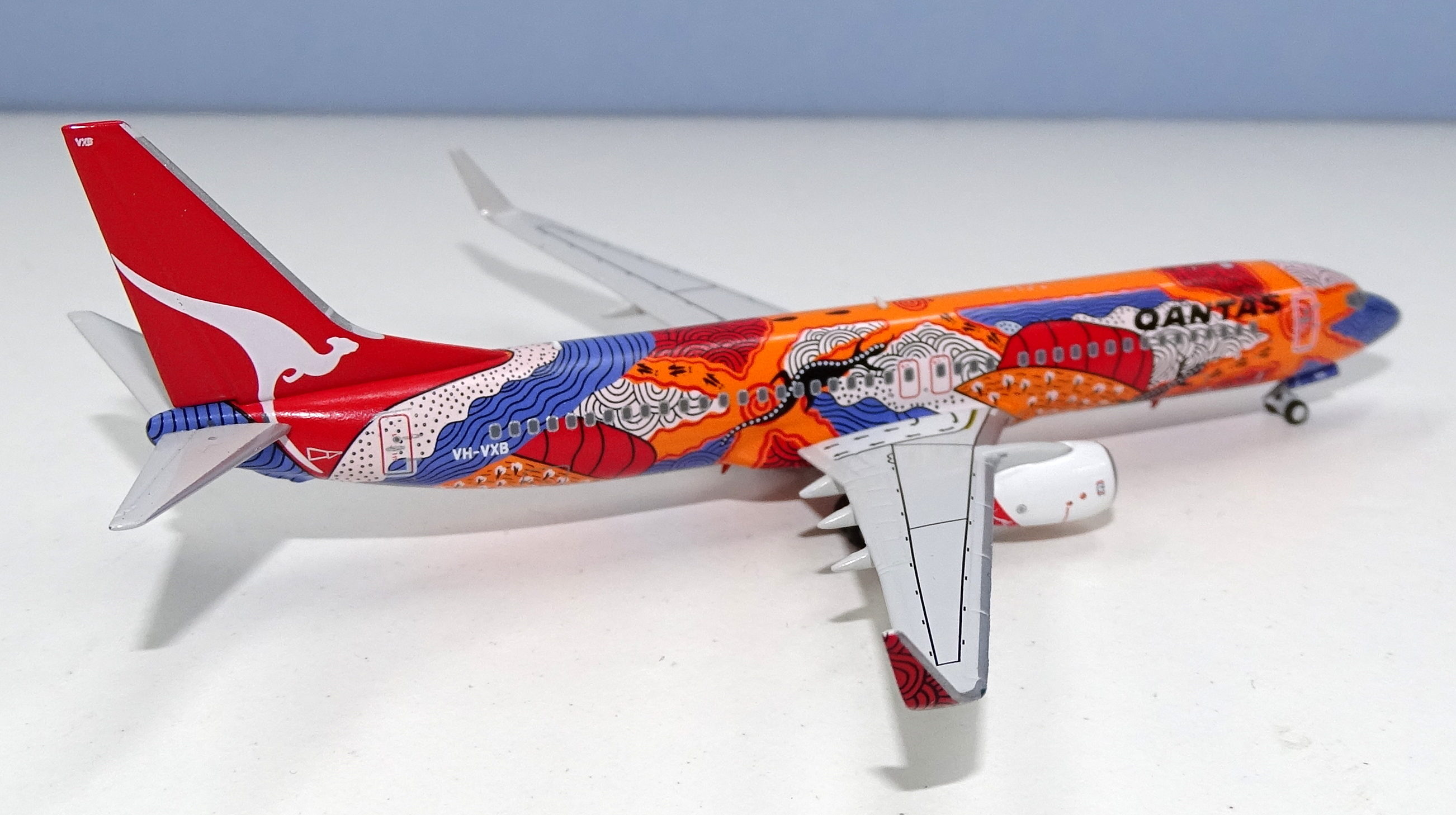 The length of the nosegear has led to some criticism, and certainly some photos show it poorly fitted, however when accurately placed as here I think it is good. It may be a mm too long but the gear leg is certainly shorter than that of a MAX, some of which in 1:400 scale (I’m looking at you Phoenix) have way too short a nosegear leg.

The rest of the fuselage is picture perfect, whilst the wings slot in tightly to the fuselage as they should. The engines and pylons are also impressive. None of the other moulds hold the engines high enough, which means, in combination with an often poorly proportioned nose gear, that the engines are too close to the ground. On this mould that is not a problem.

The mould has all five aerials including the pair near each other on the underside (one of which is often excluded on other moulds).

There are very few moulds that are as well made as this one. Not only is it the best 737NG but it is also the best 737 in this scale, and quite frankly a strong contender for the best Boeing mould in 1:400 scale period. 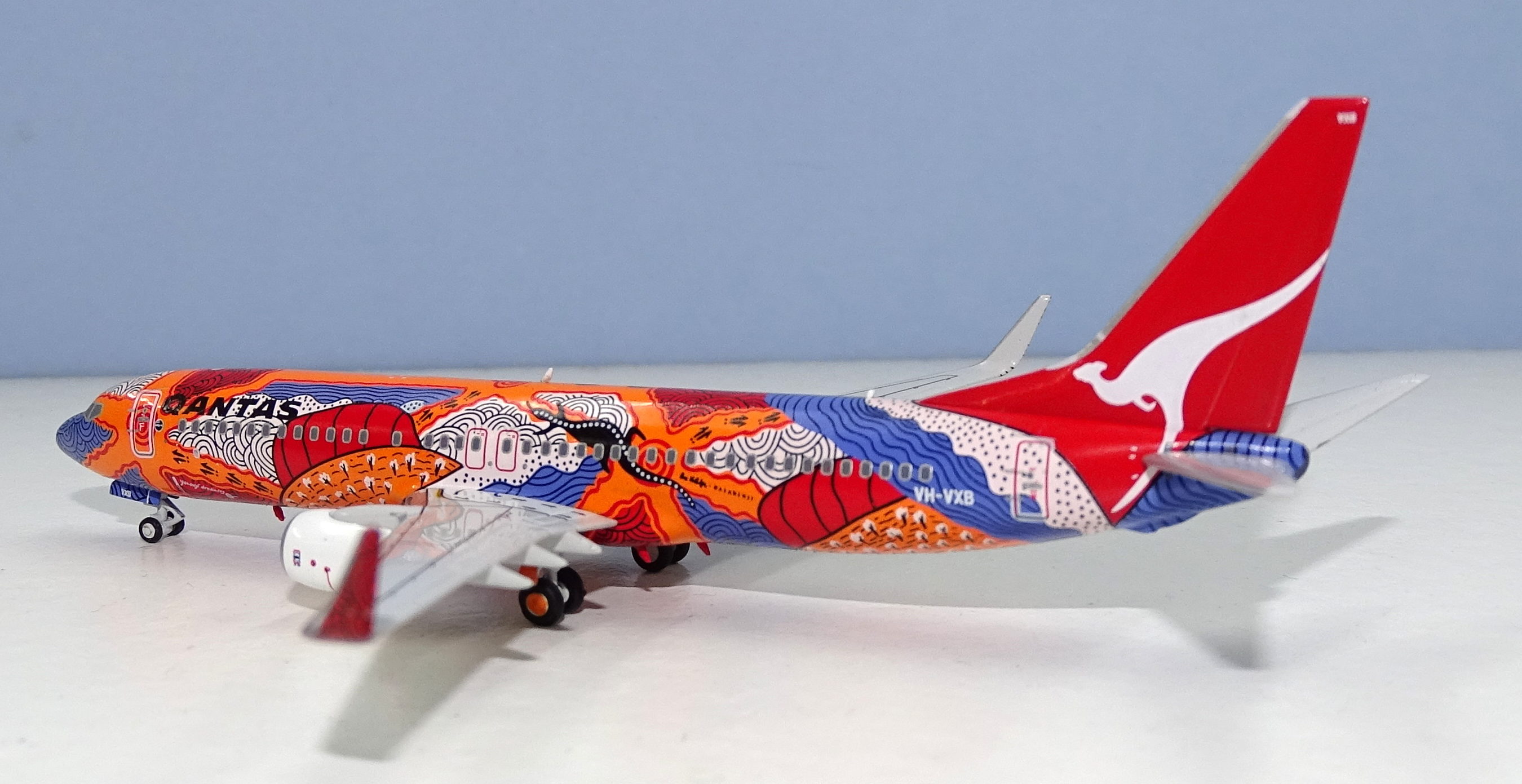 The livery covers the entire fuselage and has so many elements to it that it must rate as one of the most complex ever attempted in 1:400 scale. It has been made once before, by Herpa in 2006 on a 1,000-piece run. They look like they made a good effort but of course their casting is substantially inferior to the NG 737. The printing looks finer on the NG Models version but otherwise they both appear broadly similar.

In fact, it is interesting that they both appear to have made a similar mistake, albeit a small one. Neither this or the Herpa model have a strong enough white outline around either of the main entry / exit doors forward or aft. On the real aircraft the white space is thicker.

In other respects, the livery application is excellent. The colours are rich and beautiful and as far as I can tell all the complicated livery elements are well sized and placed. Worth pointing out for special attention are the concentric line patterns, lizards and wallaby tracks. It is also nice to see that NG have correctly coloured the outer wheel hubs orange. This is an exquisite rendition of the livery.

Standard Qantas livery elements are also well done, especially the classic kangaroo on the tail. To nitpick to the nth degree the Qantas logo on the engines looks a little too low but overall this is a very strong application of the Yananyi Dreaming scheme. 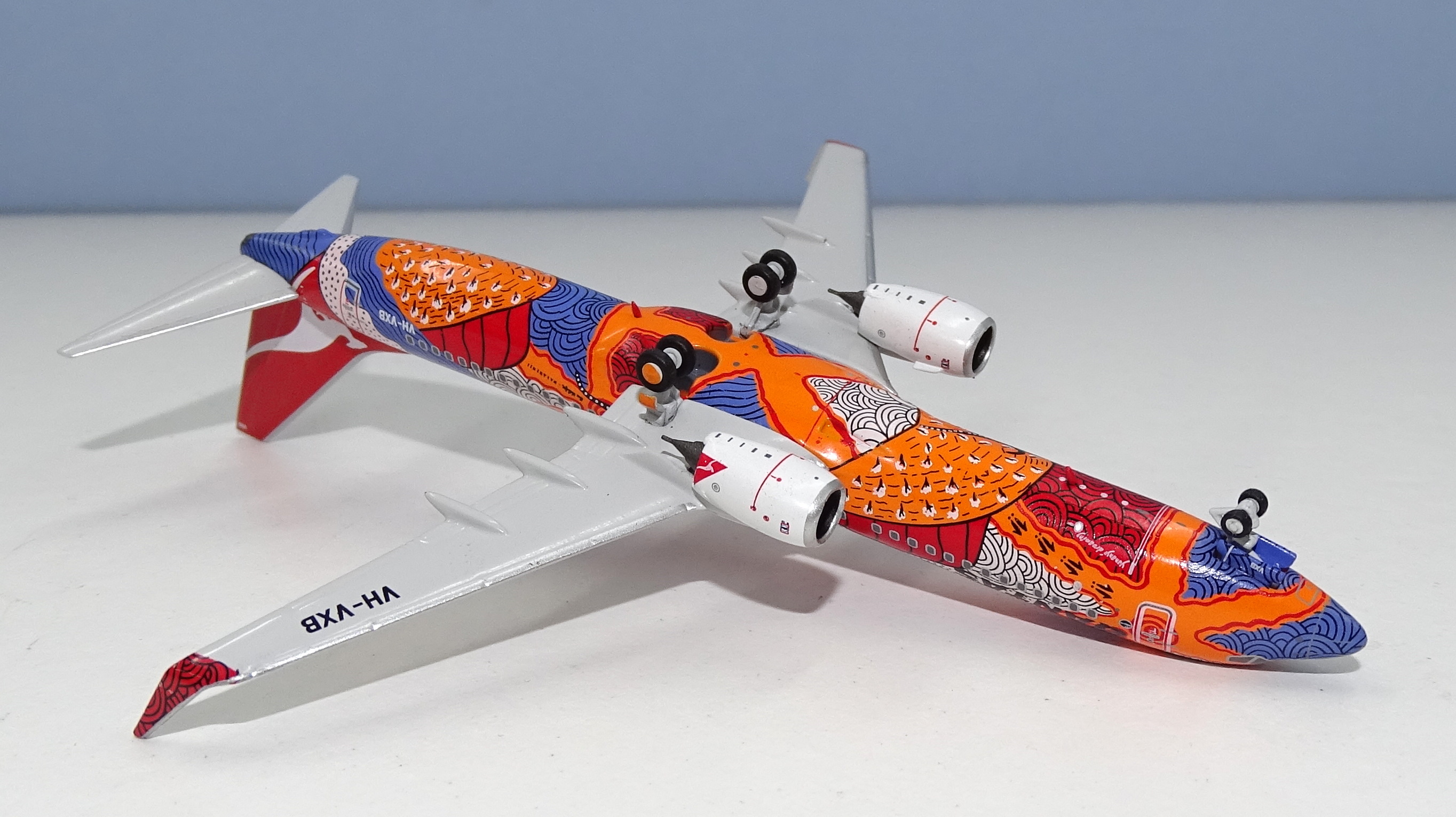 Printing is characteristically sublime. Despite the complexity of the livery NG do not skimp on template details like the nosecone markings. The wingtop escape markings are particulary well detailed. One interesting point of difference with the Herpa version of this model is that this release lacks the eyebrow windows above the cockpit. I originally thought this was a mistake but checking photos sometime between 2009 and 2013 the eyebrow windows were indeed covered up, so this model represents the aircraft later in its history, whilst the Herpa is it during its first 7 years.

No loose parts, no tyre tabs, no construction problems.

It’s another slamdunk for NG Models with their combination of best in show castings, printing and research. This model sits well outside my collection criteria yet it was so attractive that it proved too hard to resist. It really is of the highest standard.

I thought that 2018 had been a good year but 2019 proved just as good, if not better, mainly I admit once again due to the impact of NG Models. Then again, it hasn’t all […]