I noticed that last month’s NG Models releases came under the sort of scrutiny that nobody bothers putting on Gemini Jets, JC Wings or Phoenix. I found this somewhat ironic as it was almost as if NG were being punished for engaging with the collectors and producing such high-quality models. A couple of collectors I saw on Facebook were not far from trolling NG over what were in reality minor issues with their 787s, especially when you make the comparison with what Phoenix put out regularly. I am all for critiquing the models but perspective is important and considering the superb nature of most NG products and their willingness to improve I felt it was grossly unfair. So I thought I’d take a look at one of the 787s from last month and see whether the hubbub was justified.

Following the collapse of Mexicana at the end of 2010 Aeroméxico has been able to cement itself as the primary long-haul international airline of Mexico. For decades prior, the two Mexican giants had hindered each other’s profitability, even when they had been under the same ownership. Despite the growth of low-cost competition, from the likes of Volaris, Interjet and Viva Aerobus, between 2009 and 2012 Aeroméxico increased its marketshare from 28% to 38%.

A major factor in this has been Aeroméxico’s ability to grow a new refreshed long-haul fleet. The carrier secured its order for the Boeing 787-9 in December 2012 with 6 orders and 4 options. At that time the airline already had 9 787-8s on order, the first of which arrived in August 2013. The first of the stretched 787-9s was delivered in October 2019 and, as with several airlines, Aeroméxico decided to celebrate the occasion with a special livery.

The scheme was unveiled on the first aircraft, XA-ADL, in September 2016 and named Quetzalcoatl (Feathered Serpent), after the god of wind and wisdom prevalent throughout the series of Mesoamerican cultures that inhabited the region that now makes up modern Mexico. The winning design was a result of a 2014 “Design is in the Air” competition run by Aeroméxico, via social media and several universities. Out of 1,000 submitted designs, 400 met the rules and the chosen winner was designed by the graphic designer Jose Manuel Escudero from Veracruz.

As stated by the Aeroméxico CEO Andres Conesa:

“At Aeroméxico, we are very excited about the buzz the Quetzalcoatl design has generated. As Mexico’s flagship carrier, this aircraft will become an icon of our fleet and a reflection of what Mexico is today, with culture and tradition represented in what we consider to be one of the most sophisticated creations of modern aviation engineering.”

Since 2016 the 787 has cemented its place in the flag carrier’ fleet, with 9 787-9s (5 Mexican registered and 4 US registered), joining their smaller brothers, and replacing earlier 767s and 777s. Despite the arrival of the 787s it hasn’t all been plain sailing for the Mexican flag carrier, which has reported losses in 2018 and 2019.

These have been mainly due to a variety of factors outside of the long-haul network. These include increased fuel prices, inflation, the depreciation of the Mexican peso against the US dollar, the 737 MAX grounding and strong competition in the US-Mexico transborder market. Nevertheless, there are few, if any, airliners more efficient than the 787 over long-haul routes and the type has proven a wise choice for Aeroméxico.

NG Models have really stepped up the usage of their 787 mould in recent months and must be making a dent in the sales of their competitors, so it is not surprising that they are coming under more scrutiny as they expand their sales. This is especially interesting within the USA, where for a long time Gemini Jets has had an almost stranglehold on the market, and seemingly many collectors have a strong brand loyalty to Gemini. I would nonetheless expect those same collectors to compare apples with apples and at least give older manufacturer’s products the same level of scrutiny as they are applying to NG.

Having said that with 787s it really isn’t Gemini that NG are competing against. The old cradle mount Gemini 787 mould has been obsolete for years now and can’t hold a candle to any of the other 787s on the market. Instead it is the excellent JC Wings 787 that the NG models version should be compared against. This is actually the third NG 787 I have reviewed, although the first was a sample and none have been exactly the same. NG Models have the habit of fiddling with their moulds to make what they deem improvements. This is nice to see, although sometimes they should just leave alone as ‘if it ain’t broke why fix it?’ 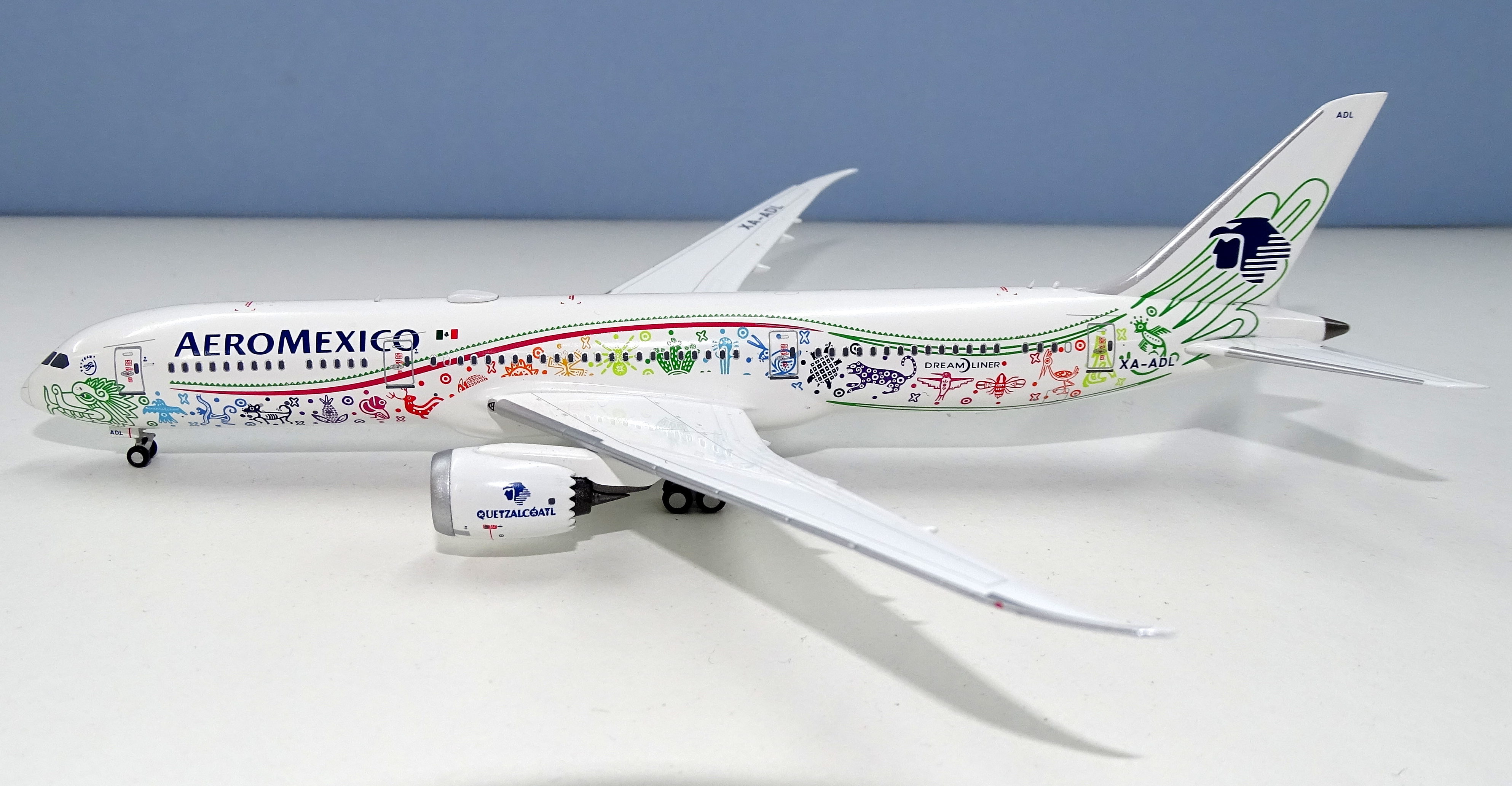 When I did a detailed mould review of the competing 787 moulds the NG Models version won in my estimation, however the difference between the two was miniscule and came down to within the range of a margin of error. Basically, both moulds are outstanding. I’m not even going to talk about the Phoenix mould. If you are still buying that then you are unlikely to care much for details. It isn’t awful but it is miles behind the NG and JC versions.

Essentially the fuselage, wings and control surfaces of the NG Models mould are excellent and compare well to the JC Wings casting. NG Models do not offer a flaps down variant, as JC Wings do, but in other ways the two are very close. The NG has slightly better sized aerials, better angled horizontal stabilisers, better shaped vertical stabilizer and better fanblades, but arguably the nose on the JC is slightly superior. 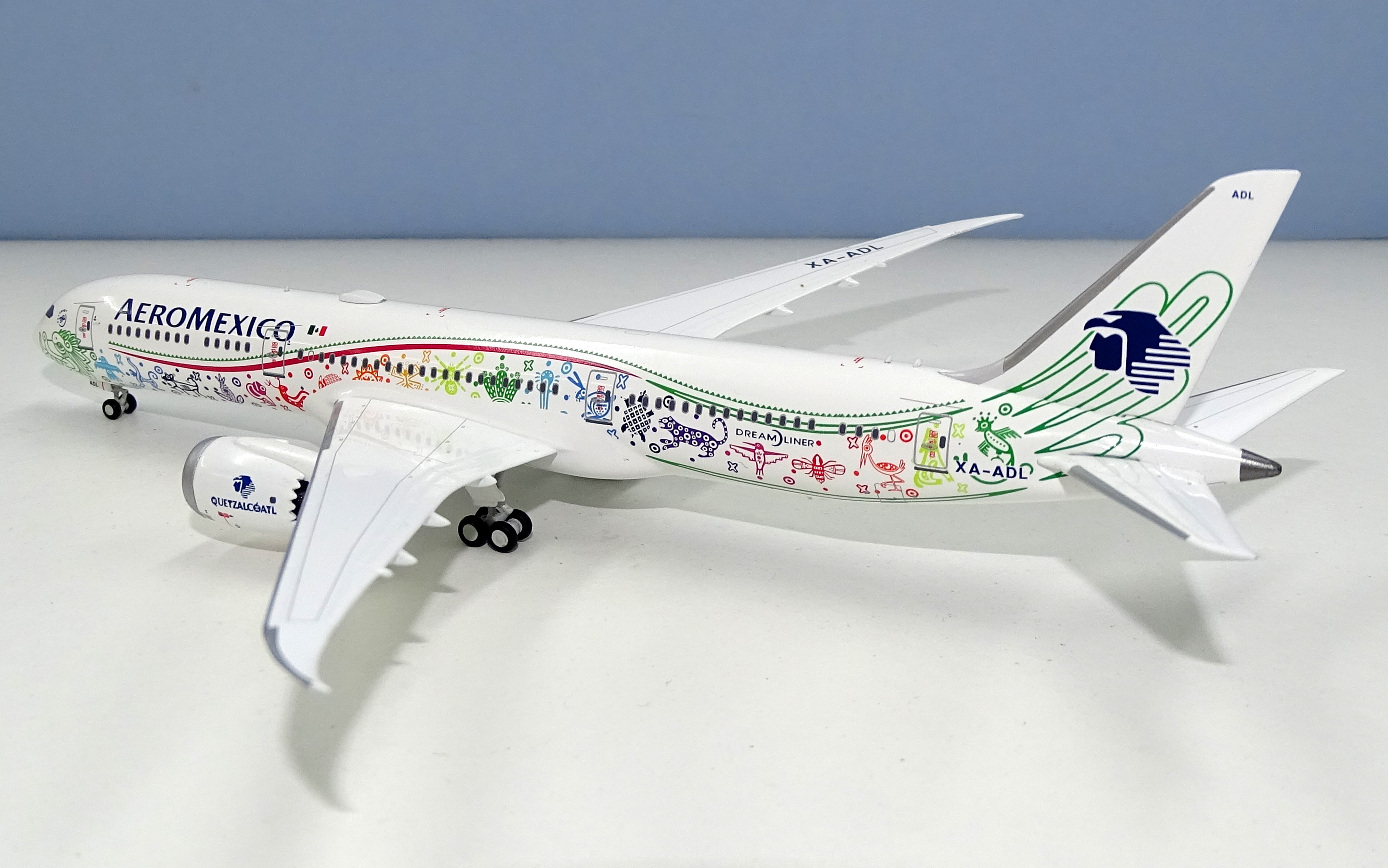 The primary area of contention, as noted by others, is the undercarriage. The NG Models mould has always had slightly taller landing gear. This gives the NG Models version much better, and more accurate, engine ground clearance but the gear length of the JC Wings was more accurate. It seems NG Models have tried to resolve this by shortening the nosegear slightly. That has improved the nosegear, but by not also shortening the maingear the model now sits slightly nosedown. It isn’t especially obvious but compared to the JC Wings version it is slightly taller at the rear. I agree that the NG maingear is too long (probably by about 1 mm), however it doesn’t really bother me personally.

I am finding it hard to score moulds that are so near the top end of their class. I have scored both the JC and NG as 10s previously even though both have nitpicky issues in hyper-detail. I’m going to change that here and knock a point off for the maingear imperfections. In hindsight I would probably also have to dock the JC mould a point, for its own minor issues, and a minor change to the maingear length on this mould would make it effectively perfect. Both the JC Wings and NG Models 787s are exceptional castings and we are lucky as collectors to have the choice between them. 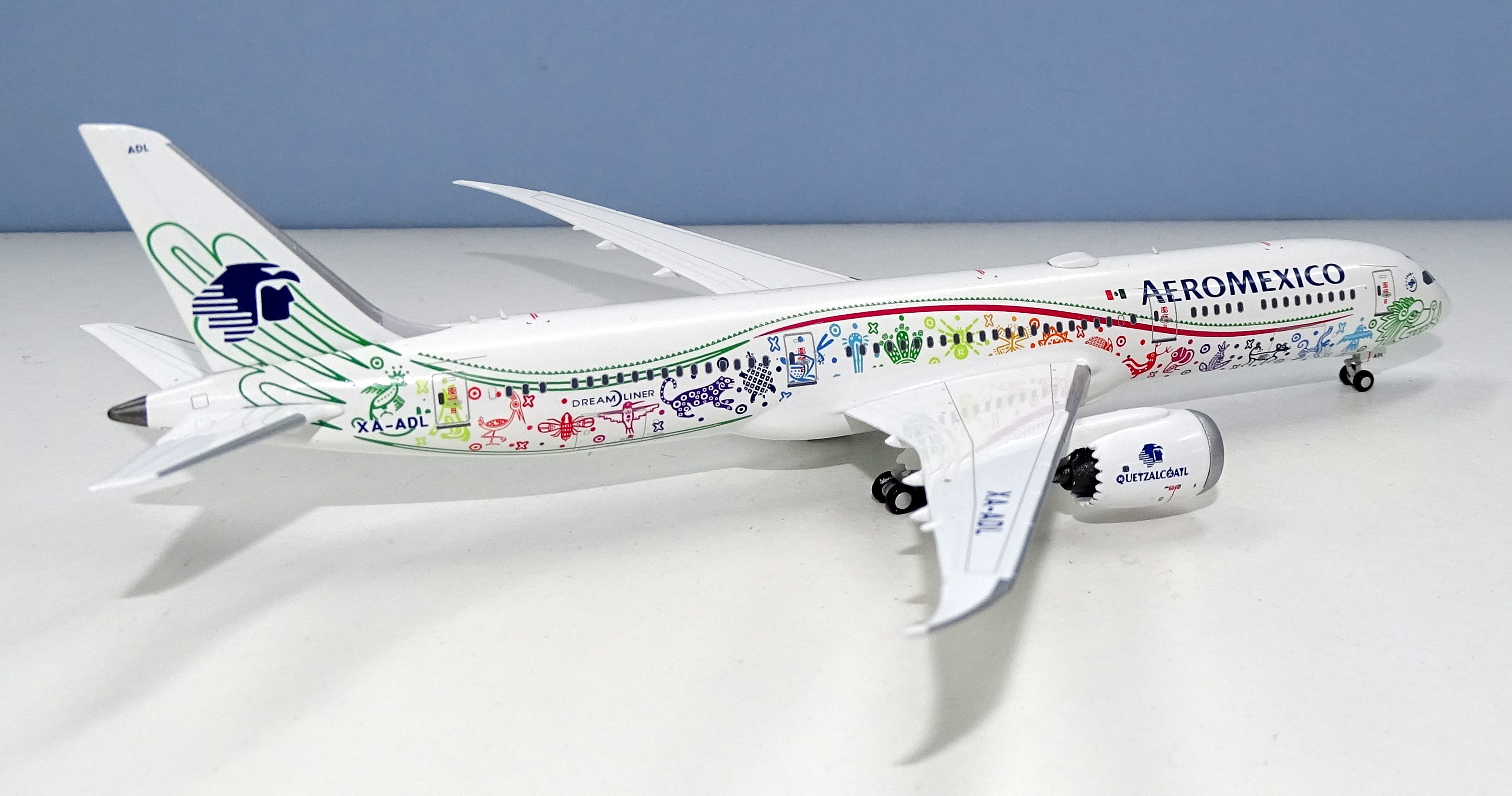 NG Models positively gallops towards liveries that are difficult to deliver in model form, and this special scheme for Aeromexico is no exception. It is one of my all-time favourite liveries. The complex scheme features a myriad of stylized animals and plants (such as a Jaguar, Jack rabbit, Hummingbird, Spider, Hawk, Cactus, Monkey and Bee) along the fuselage. These are loosely tied together with symbols and a patriotic red, white and green sash flowing aft onto the tail, where it ends in a giant feather. At the nose of the aircraft sits the head of Quetzalcoatl in serpent form with forked tongue flicking out.

This is the sort of livery you could stare at for ages looking for fault. There are well over 100 components to the finish and yet I’m struggling to find fault with any of them in detail or position. Sometimes the exquisite printing detail almost threatens to obscure the livery, such as the yellow wolf howling at the moon on the rear doors, but the animals and plants are wonderfully rendered. There are at least 9  colours used for the separate animals and plants and they look superb. 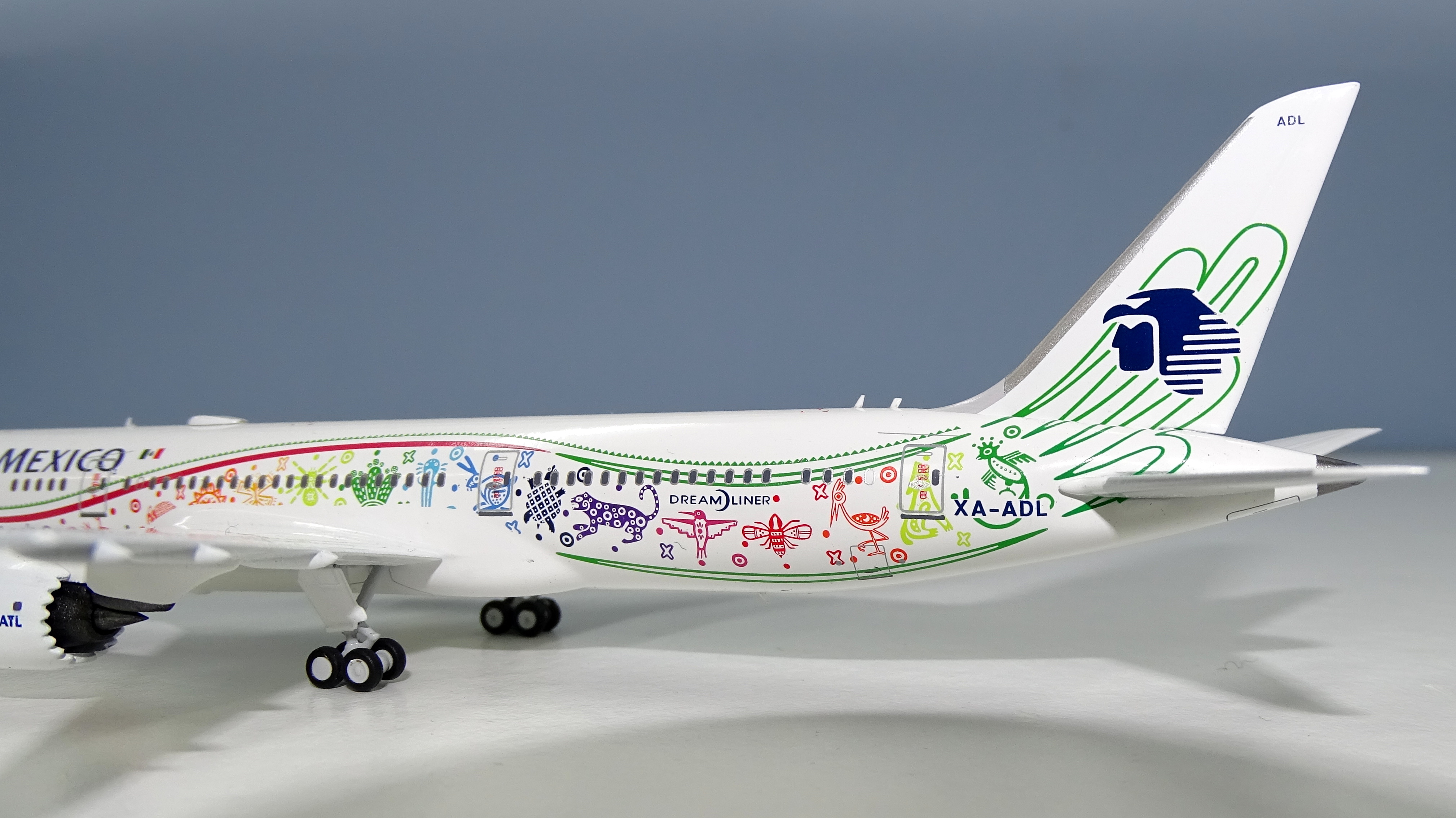 Other smaller details are of course not forgotten, from the various representations of the ADL livery suffix to the Skyteam logo aft of the cockpit. I can’t really fault the livery application in any meaningful way. Perhaps the engine titles are a little high? It’s insignificant. This is superb craftmanship. 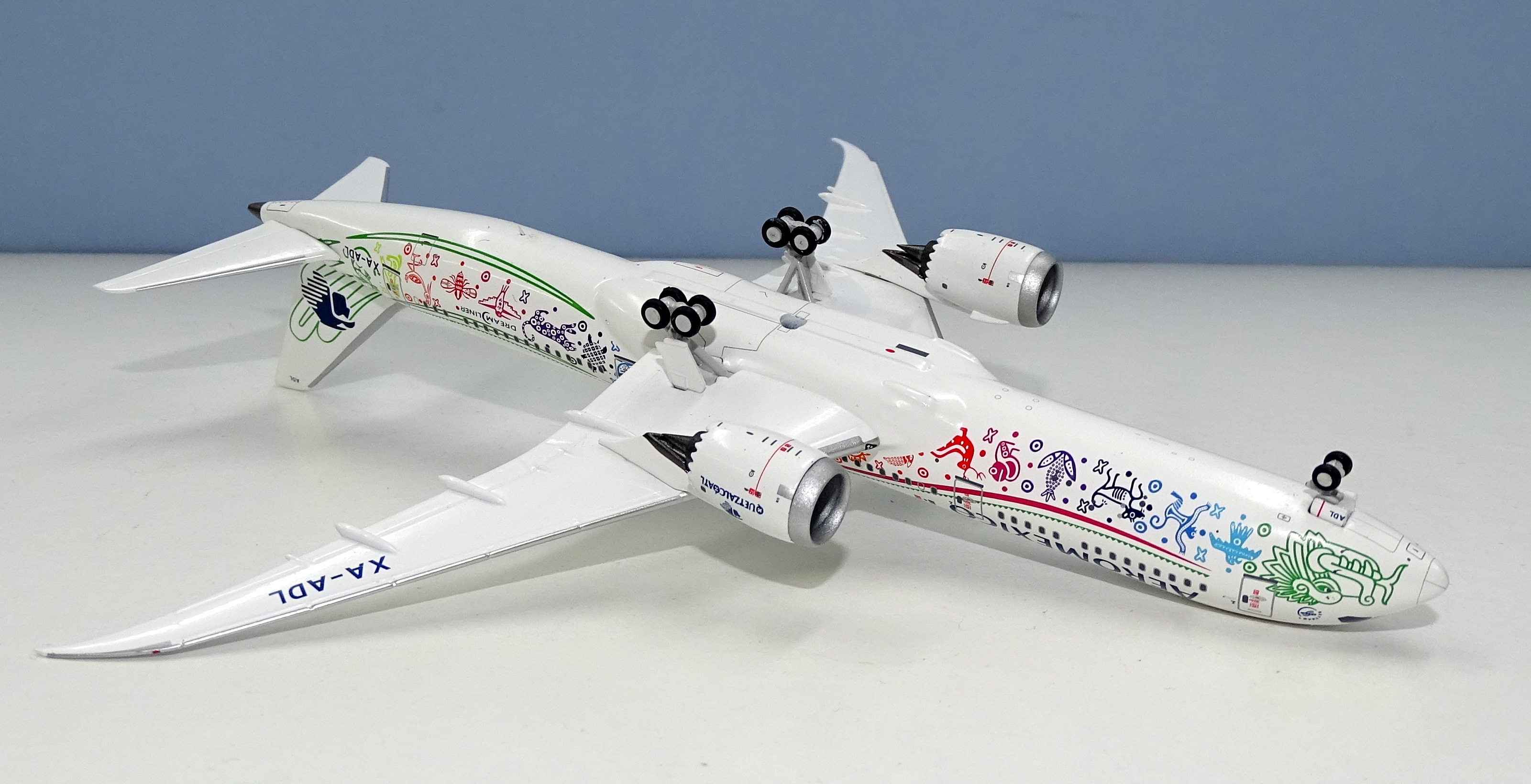 Cockpit window printing is a major bugbear of mine. All the manufacturers have made errors in this space from time to time. Some, hello Phoenix 737s and 777s, refuse to fix egregious errors year after year. Yet you rarely hear people complaining about this. So, I was rather surprised to see the over-reaction (from one particular person especially) to the NG 787 cockpit. They are right, it is incorrect. For some reason NG have changed their previous correct window print to make the two middle windows point downwards slightly, however the difference it has made is minor, and from the side almost imperceptible. If anyone returned their NG 787 over this, but keeps on buying Phoenix and Gemini, I am sorry but I think your priorities are in the wrong place.

Other than that, the printing on this model is beautiful. As I said it sometimes runs the risk of being too detailed for the scale. Build quality is also good. I have seen other people over-reacting to components detached with NG releases but I would argue that this has happened no more than from any other manufacturer. Certainly, my models shipping all the way from China, or the USA, to New Zealand, with the renowned care that EMS and US Post provide, are almost always arriving in one piece.

This is a superb model. Yes, the 787 casting has some small maingear issues, and, yes, the cockpit printing isn’t perfect but the errors are small and substantially less than regularly apply to any other manufacturer. NG Models are only marginally more expensive than others so I don’t really buy that argument and what you are getting is easily worth the extra expense. If anything, the dropped points on this model represent a manufacturer trying too hard to please. They could have in this case just left the 787 mould alone and not modified the window template and it would probably have received a perfect score.