It is not often nowadays that Gemini surprises the collectorate with unusual releases; however they have historically released a wide selection of Air China aircraft. Interestingly this Hercules was actually originally touted as a Skywings release (like the CAAC 747SP and 757-200 JC Wings released) however whereas there are both Skywings and JC Wings versions of the latter pair on the market it currently looks like only Gemini have made the L-100. Why Gemini was interested in producing such an obscure aircraft on a mould they haven’t used in years is unknown but I’m not complaining. I wish Gemini would produce more models like this. Hopefully they’ve done a decent job of it so let’s take a closer look.

The Lockheed C-130 Hercules is easily the most successful postwar military transport aircraft of all time but despite its ruggedness and utility it has had relatively little success in civilian circles. The civilianised version of the Hercules was dubbed the L-100 and entered service in September 1965 flying for Continental’s, CIA affiliated airline within an airline, Continental Air Services; no doubt in support of military operations in Southeast Asia.

Several aircraft saw service with proper airlines like Alaska and Delta but only 21 aircraft were produced in total. Lockheed didn’t give up and instead stretched the base L-100 into two new versions dubbed the L-100-20 and L-100-30. The series 20 had two stretches, one ahead and one behind the wing, making it in total 2.52 longer than the base model, whilst the series 30 gained an extra 2.03 metres overall on top of the series 20. Sales were not high but at 114 aircraft and relatively limited development costs I expect Lockheed was happy enough.

Production of the L-100-30 ended in 1992 and one of the last new customers for the type was the Civil Aviation Administration of China (CAAC). They appear to have acquired two aircraft in early 1988, registered as B-3002 and B-3004. Both aircraft were 1985 builds suggesting Lockheed was having some trouble shifting them. With the splitting of CAAC both appear to have moved to China Eastern initially and then B-3002 at least moved to Air China Cargo. It is hard to find much information about why the Chinese needed the L-100s, especially when their military was not a customer for the Hercules itself.

By May 1999 it appears their utility was at an end as both were sold to Safair in South Africa. B-3002 became ZS-OLG and B-3004 became ZS-JAG. The former machine didn’t stay long at Safair and joined Lynden Air Cargo as N405LC in July 1999. She has subsequently been converted into a Coulson next generation airtanker, becoming N405LC. Coulson Aviation Ltd still appears to use the aircraft as a water bomber alongside an ex-USN EC-130. The other aircraft was sold in the USA in January 2004 as N4557C, joining Rapid Air Transport. 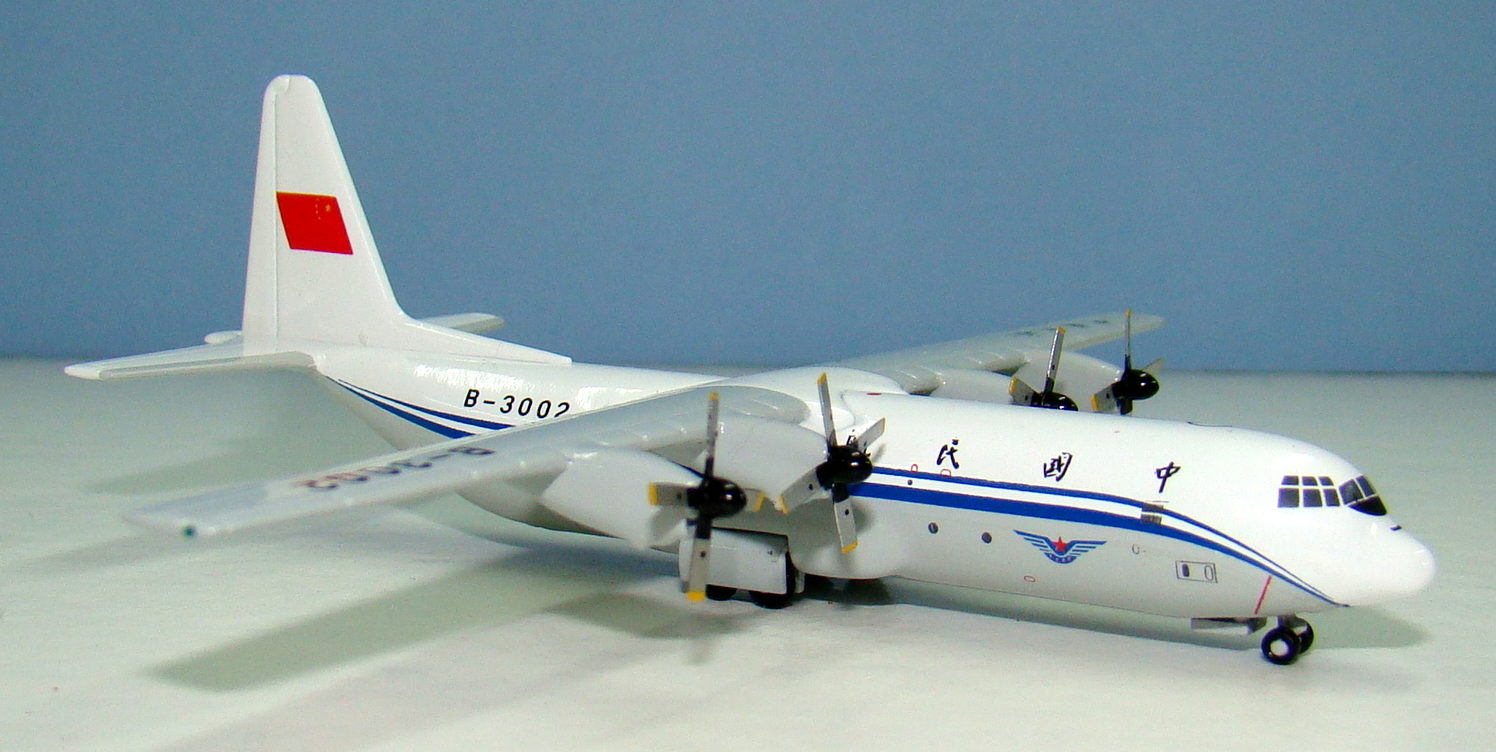 Gemini has two C-130/L-100 moulds which have produced 37 mainly military models in 1/400 scale. The longer of the two moulds represents the L-100-30 or C-130J-30 and has seen now 6 civilian and 4 military releases. When looked at in detail the Herc has some truly odd lines especially with the radar nose rather slapped onto the front of the fuselage kind of like an afterthought (the earliest Hercules indeed didn’t have it). The Gemini mould represents this well. 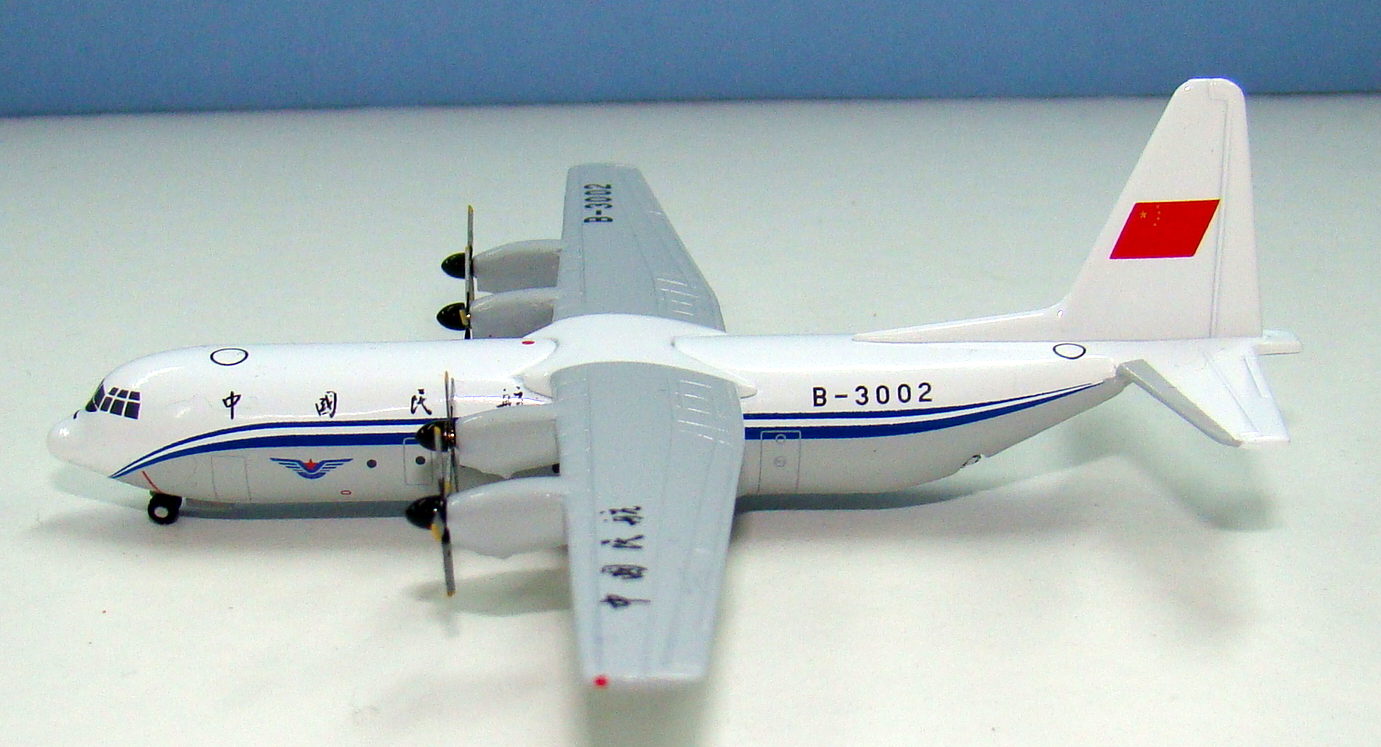 The entire fuselage looks very good with well defined and accurate lines. The rear cargo door is really nicely detailed being defined with two separate pieces rather than just outlined onto the fuselage. In fact it kind of looks like you can extend the doors and indeed when the upper door is removed it does contain detailing on the inside suggesting there is intent that the model be displayed with the door down. I’m not entirely sure how this can work but you can certainly manually remove the upper door and slightly extend the lower cargo ramp (which has again detailing on its internal surface).

The mould is a reverse cradle (as the wings are on the fuselage top rather than bottom) but unlike the Gemini AN-124 this doesn’t introduce any issues as the seam line is very discrete and follows the contours of the wing/fuselage lines well. In fact you could argue that it looks better with the seam line than it would without it. 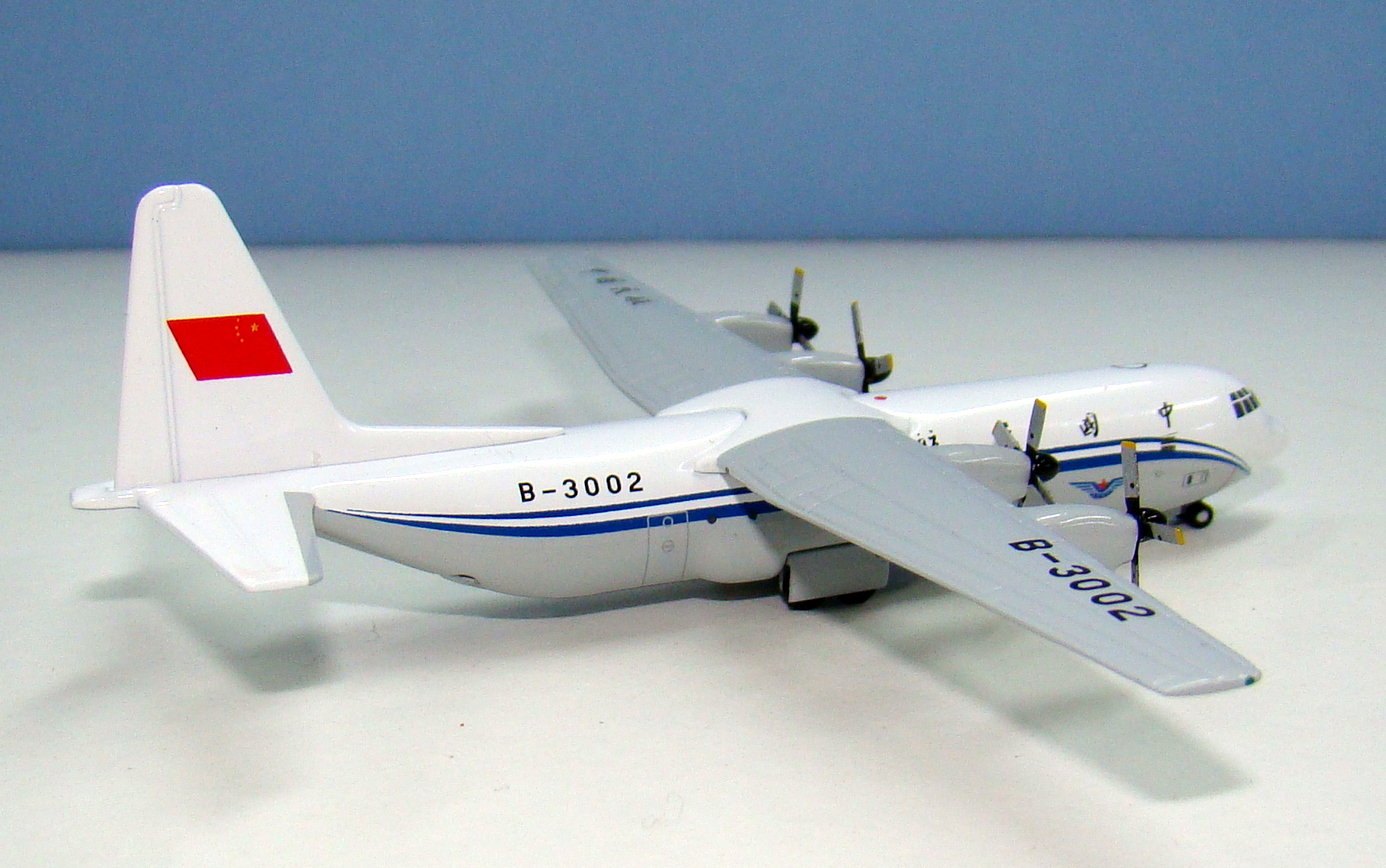 The undercarriage elements are well done, no doubt assisted by the short undercarriage. The gear doesn’t roll but who cares about that? I like this mould a lot and if I am looking for criticism the only places I can find it are the engine nacelles, which lack some contouring and detail and the lack of the large aerial atop the cockpit.

Photos of the Hercules in CAAC colours are not common but from what I’ve seen this model is wearing a later livery than the original delivery scheme. It in fact closely matches the cheatline arrangement worn later in the Air China Cargo days. Aside from the cheatline colour being a bit too light (as mentioned in the previous 2 CAAC reviews) this is an easy livery to reproduce for Gemini and they have done a good job.

The CAAC titles themselves are accurate as is the winged airline logo on the grey belly. Registration and titles also appear correctly on the wingtops and undersides. Acquiring correct fonts for usage seems a common problem now I’m paying closer attention to models and Gemini have fallen into this trap here with the registration, which is simply not the correct font. Gemini’s numbers for B-3002 are too rounded with the 2 in particular being the wrong shape. It is not a major issue but it is nonetheless incorrect.

Judging by the photos I’ve seen the inboard flaps should also be black on the wing underside at least and they are reproduced incorrectly here as light grey. Lastly the cockpit anti-glare looks too small and should be wide enough to cross the margins of all but the outermost two cockpit windows whereas on the model the outer three are lacking anti-glare.

Printing is good on the model as a whole but it is rather lacking extra detail. What is there is nicely realised but I do think some extra lines on the engine nacelles, maingear fuselage humps and nose radome would help. The latter relies on the mould’s lines to differentiate whereas on the real thing there is a quite clear join line, which I think would be nice to see on the model more clearly.

The L-100-30 is another older mould, which makes it solid and reliable, especially as the undercarriage is so short. Construction is excellent.

I was pleasantly surprised to see this model released and in fact was unaware that so many civilian Hercules (including an Air China Cargo example) had even been made in this scale. The mould is good and the model overall very nice. The areas where it drops points are all minor criticisms, which don’t affect the general aesthetics of the aircraft, but would be nice improvements nevertheless.

Next Week at The Diecast Flier-July 24th-30th!

It’s hard to believe we’re onto the last week of July! We have an exciting and action packed week of model reviews, news and more for you in store next week at The Diecast Flier! […]

I last reviewed a BigBird model in March, but don’t let that fool you into believing that they have picked up the pace at all. In fact, since then only two models have been released, […]