As 2019 moves into its last quarter there aren’t many major airlines that haven’t made their re-equipment choice between the Boeing 787 or Airbus A350. Of course, if you are one of the Chinese majors you just acquire both, as the manner of state governed aircraft purchasing and massive fleets means having sub-fleets of each is no biggie. This is good news for the 1:400 manufacturers. Certainly, Chinese airline releases remain a major part of the 1:400 scene and the A350 is one of the more competitive types in this scale with Phoenix, JC Wings and Aviation400 battling it out for sales.

Among the Chinese majors the Airbus A350 and Boeing 787 have fought it out to an effective standstill, with both gaining substantial portions of the market. In the second tier of majors Sichuan Airlines has A350s while Shanghai Airlines, Xiamen Airlines and Juneyao Airlines have all opted for the slightly smaller Boeing product.

In Hong Kong the A350 has both Cathay Pacific and Hong Kong Airlines as customers. Within the big four themselves A350 and 787 sales have been almost neck and neck.  Air China, China Eastern and Hainan Airlines all have both. Until recently China Southern was a staunch customer of the 787, not that it has anything against Airbus products of which it operates over 330, but in June it too acquired its first A350-900.

China Southern has a widebody fleet consisting of 5 Airbus A380s, 14 Boeing 777-300ERs, 24 Boeing 787s and 47 Airbus A330s. The June 27, 2019 delivery of B-308T marks the first of 20 Airbus A350-900s, which were ordered in April 2017. As is standard, for new type introductions at Chinese airlines, initially the A350 will fly high capacity domestic routes such as Guangzhou to Beijing and Shanghai. As more join the fleet it will transition on to the long-haul international routes it is designed for.

For China Southern the A350 marks another step towards becoming the world class airline it wants to be. The aircraft are fitted in a 3-class 314 seat layout with 28 business class, 24 premium economy and 262 economy class seats. The seating is by Recaro and represents a change in comparison to the existing product offering across the fleet. The business class Recaro CL6710 seat is the same as used on EL AL’s 787s and TAP’s A330neos.

China Southern has plans to become a 2,000 aircraft airline so it is vital for Airbus that its major product lines find a home in its fleet. Initial certification from the CAAC took longer than expected, and wasn’t received until mid-2018, but the A350 has found little trouble carving itself a role and making sales. Looking at the numbers, if in service and orders are combined, the A350 now has 99 sales on the Chinese mainland compared to 114 for the 787. All of these are for the A350-900 or 787-8/9, but it is surely only a matter of time until the A350-1000 and 787-10 are seen in the colours of the People’s Republic’s airlines.

The Aviation400 A350 has become my go to A350 casting. I have heard good things about the updated JC Wings A350, with a modified nose profile, but have yet to acquire one – partly because JC Wings don’t seem to be printing the cockpit windows in the correct position and partly because the details on the AV400 mould are excellent. 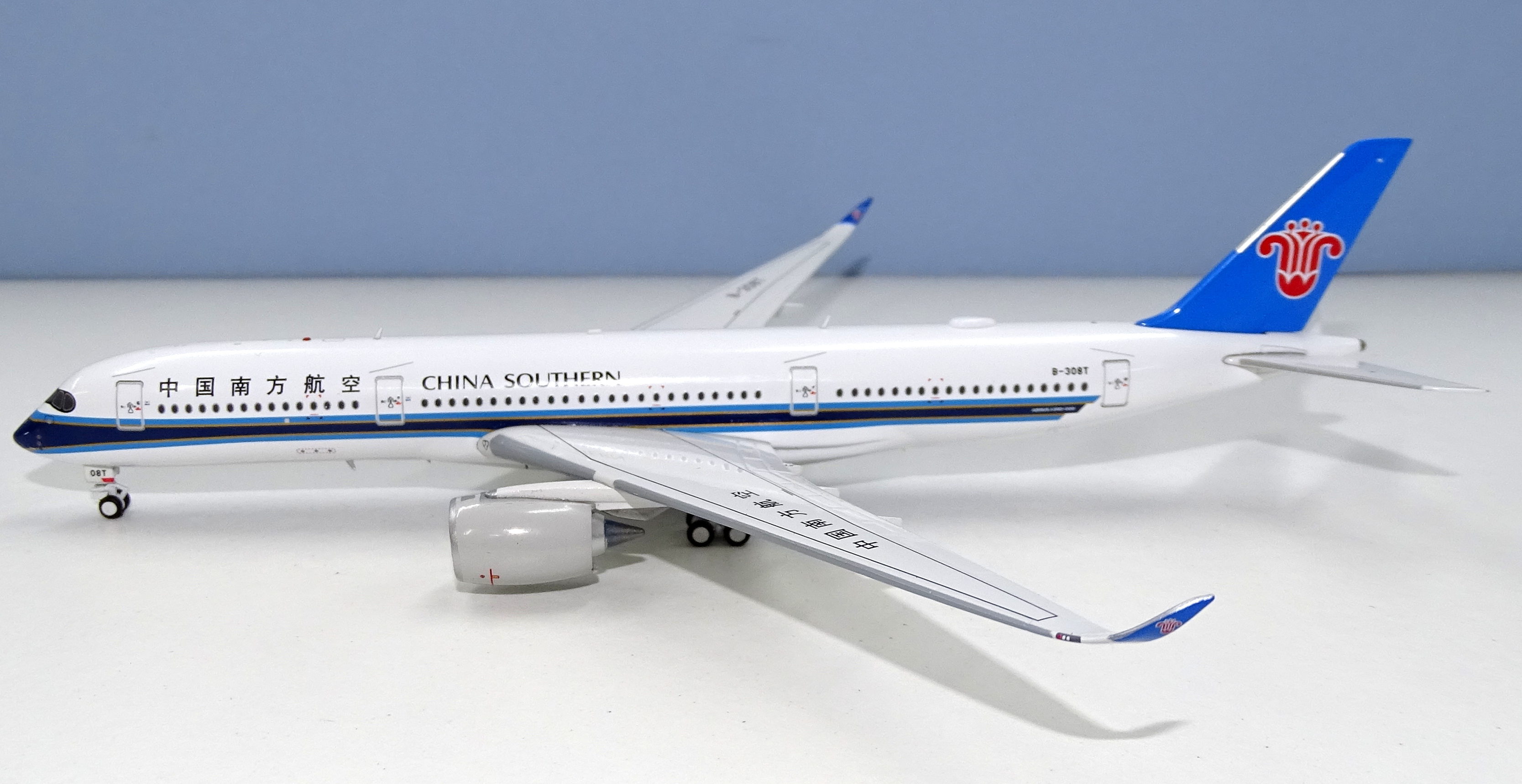 For many it has been the nose profile that has cursed the various A350s in this scale, with the older JC Wings effort typically coming in for a real clobbering. I can’t talk to the new JC Wings version yet but the AV400 nose is good enough for me. It reproduces the slight change in angle upwards beneath the cockpit well. Holding it up in front of a photo of the real thing the change is perhaps still a little too subtle but overall it matches. 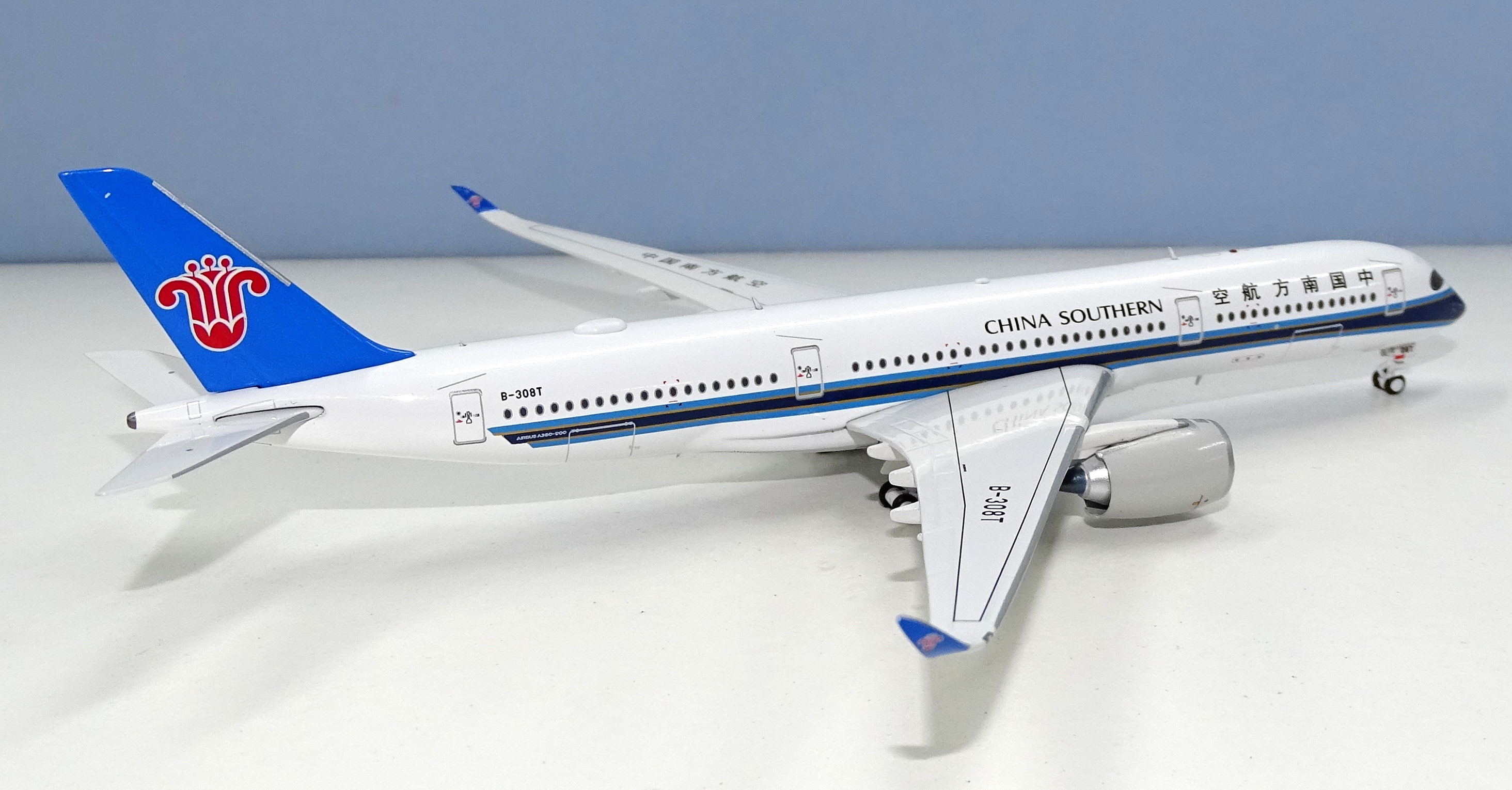 The fuselage is excellent including the complicated post wing area. It also has exceptional mould detailing. There are six antennae (3 on the roof, 2 on the belly forward and 1 on the belly rear) three of which are very small. In addition, the tiny dome on the roof above the wing is not moulded in but a separate unit precisely fitted.

As with their A340 mould, AV400’s A350 has both beacons (red plastic inserts) on the upper fuselage and underneath. They are flatter and smaller than on the A340 so work even better. This aircraft also has a sizeable satnav/Wi-Fi dome, unfortunately it isn’t particularly well shaped. On the real thing it is a teardrop but, on this model, it is rather uniformly shaped, albeit very well fitted. 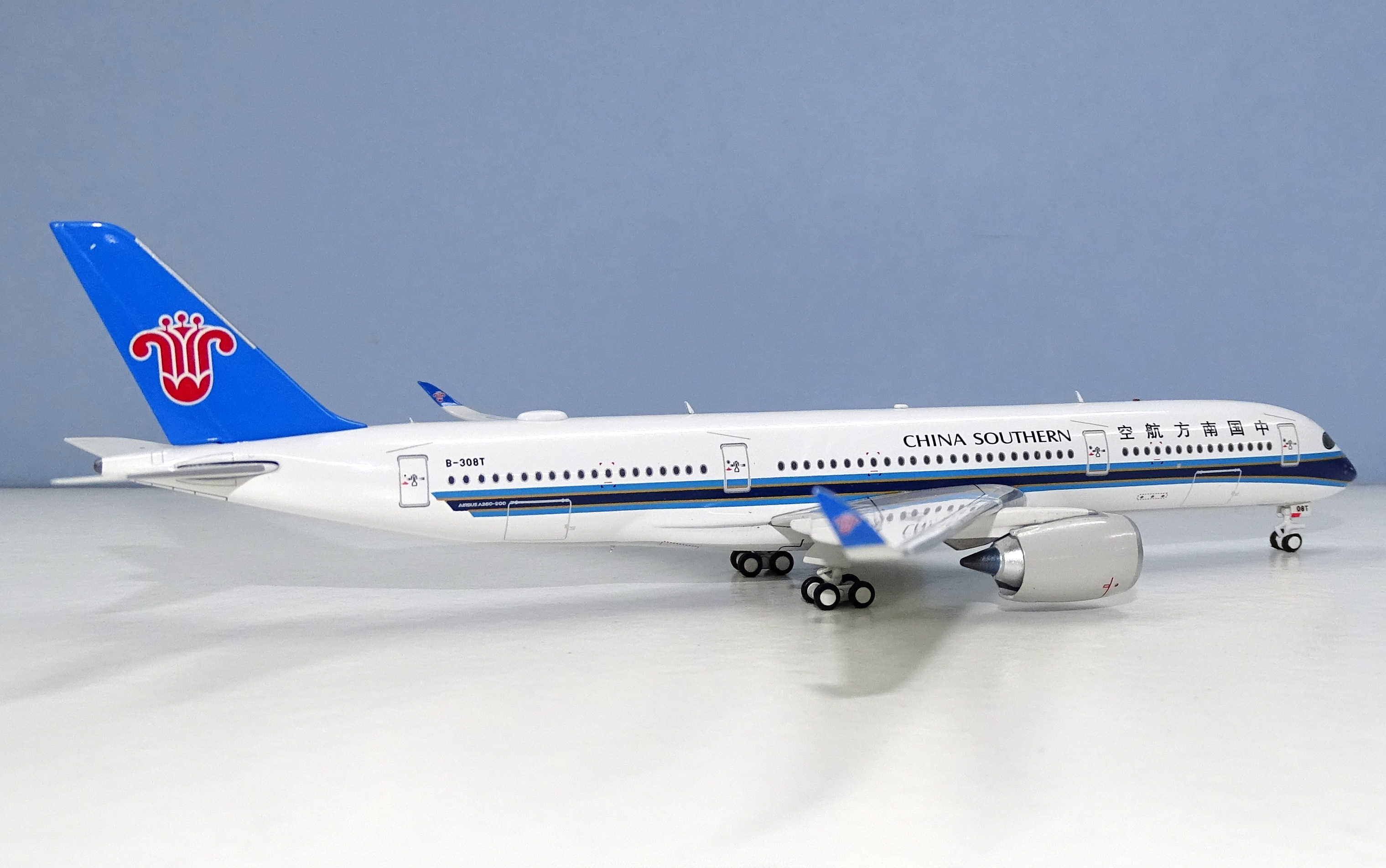 The engine pylons and nacelles themselves are very good also keeping the engines well off the ground and closely fitting to the wings. Early AV400 A350s had an issue with engine orientation, whereby the engines pointed upwards but that has now been fixed and removes the biggest issue with the mould. The engine inners are very finely detailed. The engines are see-through, in fact the most see through I’ve ever seen in 1:400. This isn’t necessarily a compliment as the blades are way too thin.

Looking at the undercarriage and it is very finely built. The nosegear is a good length but not as chunky as the Phoenix. The maingear bogies are separate pivoting units (as in the Phoenix 777) and so can be moved independently to replicate different positions. The mechanism for doing this does mean that the bogies lack detail and look rather unrealistic. Aviation400 have recently increased the size of the maingear tyres on their A350s and these are now better sized and also hide some of the maingear bogie too. It is an improvement over earlier releases.

With a combination of features and exceptional detail to the aerials, undercarriage and engines this is an excellent mould. It is in my opinion easily the best in 1:400 scale however there are minor points (maingear trucks and engine fans) that could be improved.

This is the third China Southern release I’ve reviewed this year but the first in the standard colours, which increasingly look like a beautiful classic scheme that works on almost any aircraft. When SAS have produced that dismal looking new blue and silver thing, and think its ‘iconic’, you can tell the world of design has gone mad. Hopefully CZ will not be changing this scheme anytime soon. Having said that, I am mildly surprised that they did not produce a special scheme like they did for their 787s.

This livery is so regularly produced that you’d expect 1:400 manufacturers to be able to reproduce it in their sleep, Aviation 400 certainly can. Aside from the white base there are only four major colours – a dark blue, light blue, gold and of course the red for the kapok flower on the tail. The kapok flower from the mumian or ‘cotton tree’ is native to Southern China, used widely to make clothing and tea, and is the city flower of China Southern’s homebase Guangzhou. All four colours are correct on the model.

The livery is also applied perfectly to the model. The cheatlines curve beautifully under the nose, the logo is repeated on the inside and outside of the winglets and all the small details are present.

Aviation400’s printing is very good and widespread. The cockpit windows are particularly strong, unlike the Phoenix example of this same model in which the cockpit is too low and pinched in the middle. The frames around the side cockpit windows are very finely detailed and yet fit well within the bandit mask. Printing detail is particularly strong on the roofline and underside (an area of usual Phoenix weakness). Together with the navigation beacon the underside of the model looks excellent.

One of the diagnostic points about the A350 engines is the main exhaust funnel should be a metallic blue and not silver. This has often been missed on 1:400 A350s but Aviation 400 do provide the correct colour. Unfortunately, the application of the paint thins markedly towards the rear tip. There is also another minor paint imperfection, perhaps caused by cradle rash. On the starboard side of the nosecone there is a small paint chip showing white paint. 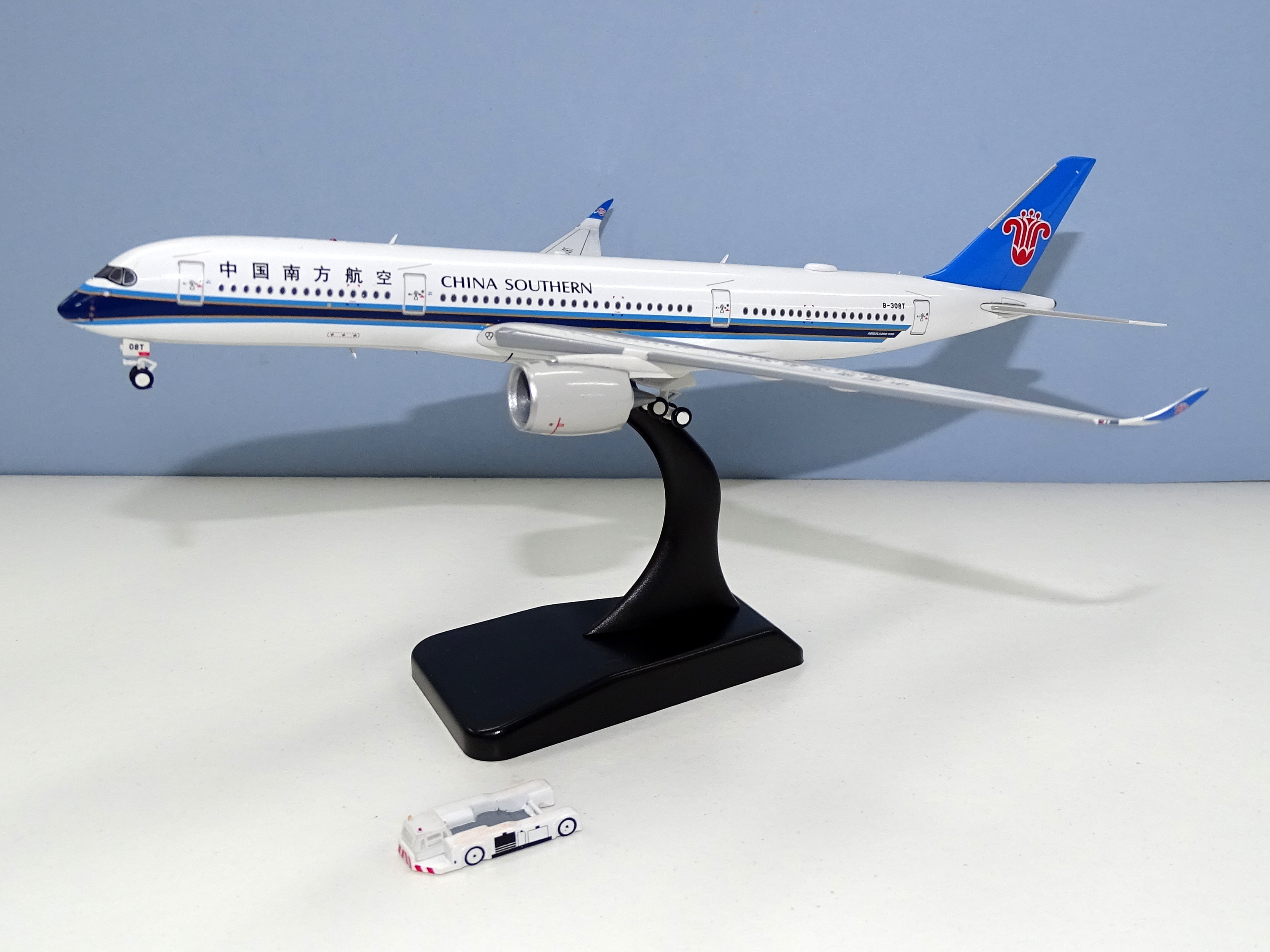 Construction quality is excellent which given this model consists of over 30 separate pieces is no mean feat. Like all AV400 models this A350 comes not only with the excellent black plastic Witty Wings style stand but also a pretty decent pushback tug. 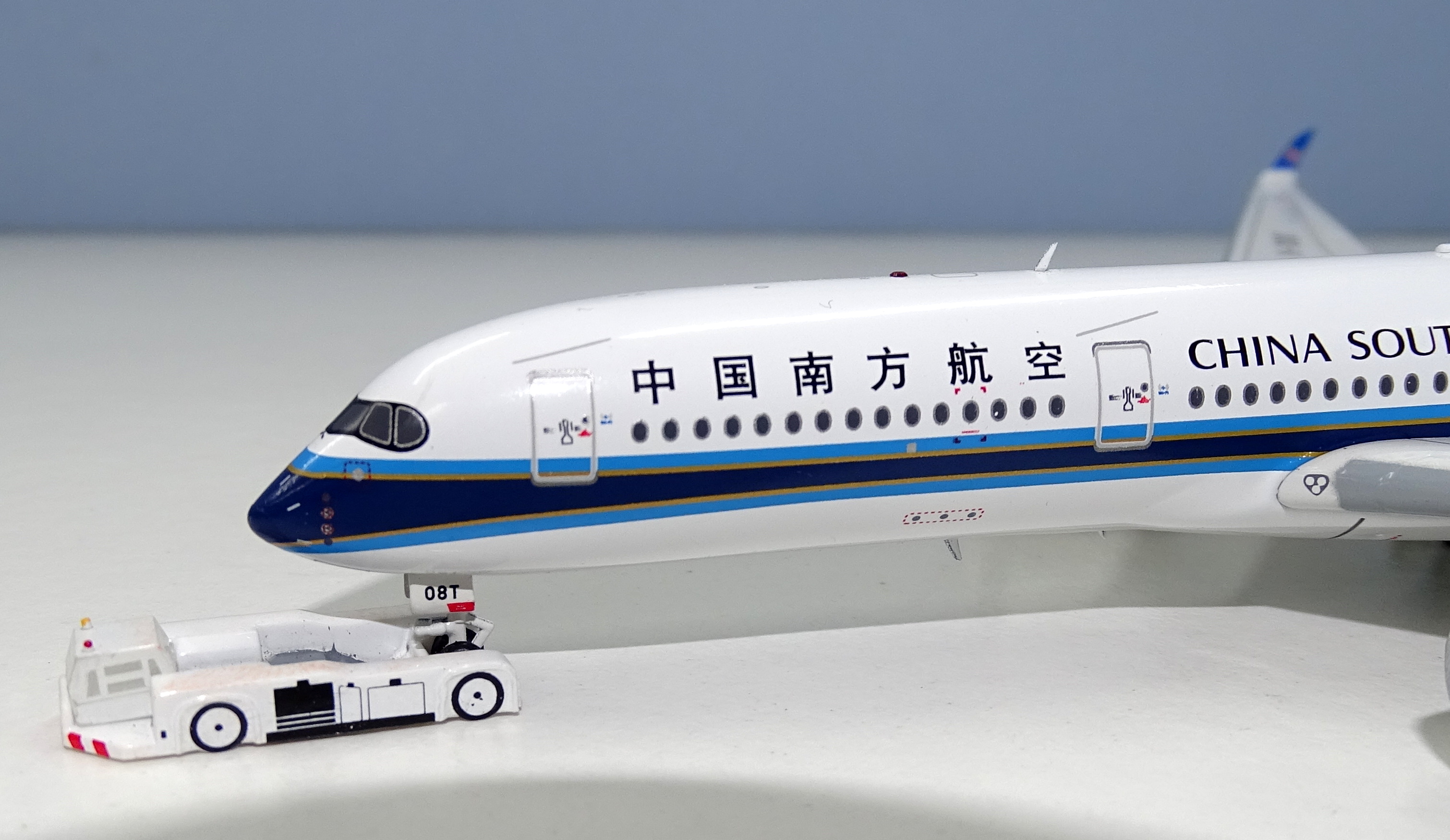 Aside from a colour mis-step with their initial Cathay A350 releases the Aviation400 A350s have all been impressive. The overall look of the casting is better than the JC Wings and substantially superior to that of the Phoenix across the board. Add on better printing and detailing and I don’t know why anyone would buy the Phoenix A350 anymore. The quality of the mould and print together make a potentially ordinary release really stand out and if you are a fleet collector of the Chinese majors, as I am, I’d expect you already have several of the AV400 A350s in your fleet.