There’s no doubt that the 737 MAX family are going to become incredibly common at the world’s airports over the next decade with sales, as of the beginning of the year, of over 3,600 units. The majority of these are for the MAX 8 version, which has been the first variant to fly and so it is little surprise that this aircraft is also the first to appear in 1/400 scale. Panda models have been growing in scope recently and they have been first to market with both an A320NEO and a 737 MAX so let’s take a look at how they’ve done.

The first 737 MAX 8 to be rolled out from Boeing’s Renton assembly facility, on December 9, 2015, was registered N8701Q and appropriately named ‘Spirit of Renton’. The aircraft’s first flight occurred on January 29, 2016 and the 737 MAX Chief Pilot Ed Wilson stated that the “airplane just felt right”. Was he ever going to say anything else?

The primary external differences between the MAX and a 737-800 are:

The new MAX 8 is expected to enable a 14% reduction fuel burn over late model 737NGs and a 20% improvement over earlier NGs. Boeing also claims 8% lower operating costs over the A320NEO but I bet that all depends on how you cook the numbers! Launch customer for the MAX is technically Southwest Airlines but it appears they won’t receive their first aircraft until July 2017, with service entry in October, whereas Norwegian is expected to get theirs in May. Regardless the sky will soon start to fill up with MAXs that’s for sure.

Panda models have shown an impressive willingness to lead the market with new narrowbody moulds for both the A320NEO and 737 MAX on top of their excellent range of current generation narrowbodies and A330s. Although they have been accused of mould copying with the Airbuses on the Boeing side of things the moulds are 100% their own and I assume they have developed their existing series 800 into the new MAX 8 mould. The only competition so far with this aircraft type is JC Wings but their mould has not been actually released yet, although photos have been made available.

Panda models released 3 737 MAX 8 models in January 2017. They represent two of the test aircraft (N8701Q and N8704Q) in slightly different liveries and a fantasy aircraft to celebrate the Chinese New Year. The model under review is the first prototype, N8701Q, wearing the first flight scheme complete with customer tail logos on the rear fuselage.

Historically the 1/400 model manufacturers have struggled with the 737NG despite many attempts at it. I personally always liked the Panda/Aeroclassics mould but it wasn’t perfect and has a too angular look around the cockpit. This is not the case here suggesting Panda have gone back to the drawing board completely. The nose is perfect as is the shape overall. In fact I have rarely seen a narrowbody mould in 1/400 so well rendered. I can’t fault the fuselage, wings or stabilizers. The undercarriage is also well detailed and the correct length, with well sized tyres. It knocks the spots off the photos of the JC Wings mould I have seen, which has an inferior nose, nosegear and engine pylon attachment.

Panda has begun to fit aerials to its moulds and this new MAX has 4 of the 5 found on the real thing (the non-midline rear underneath aerial is not represented). They are well shaped and correctly sized.

If I stretch to find fault with this mould about the only things I can see are the small space forward of the nosegear door and perhaps the bottoms of the engines are too rounded. That is extreme nitpicking however and I’d be a thief if I didn’t give this mould top score.

Boeing’s current house livery suits the 737 well and the added airline tails on N8701Q add real interest. It is a surprisingly complicated livery however, requiring close attention to get correct. First of all on the colours and Panda has got them spot on. The multiple shades of blue and grey are picture perfect.

Looking at the livery itself the tail and fuselage titles are all present and correct down to the small ‘Spirit of Renton’ beneath the cockpit. Engine titles are also correct as are the small 737MAX titles on the inside and outside of the winglets.

The general livery itself is however not so perfect. On the real thing the tail pattern graduates to ovals near the front, and although this can be seen on the Panda release, they are not always fine enough to truly be full ovals on the model tail section. The horizontal fuselage lines fade out on the real thing at both front and rear. This is difficult to replicate on the model and isn’t quite correct around the overwing emergency exits or registration. These are very much detail fails however and you have to look really close to notice them.

One aspect of this livery is the incredibly fine details especially around the customer tail logos. Each is within a small box. The box outline almost fades away at distance on the real thing but this is much harder to achieve on the model given the small size of it. The aircraft tail logos themselves are tiny and even under a magnifying glass it is almost impossible to see the details of them. I don’t think Panda has tried too hard to differentiate each, however they certainly don’t look all the same. Given their tiny size it is perhaps the best that anyone could do in 1/400 scale. Nonetheless the tails and their outline boxes do look a little more obvious than on the real aircraft. 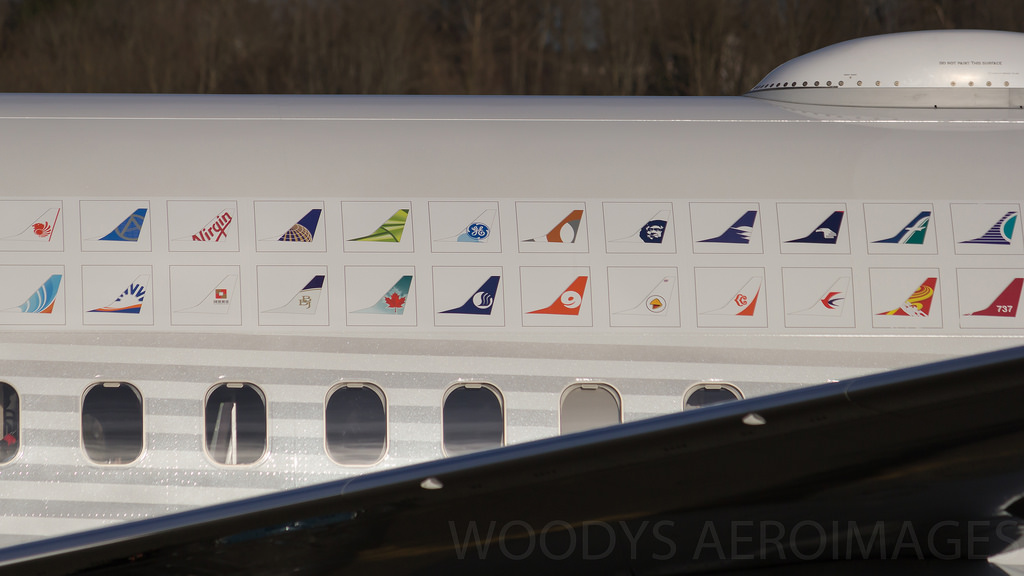 Panda models printing has shown itself to be up there with the best that JC Wings and others can manage so it is no surprise that it is excellent on this new model. There is lots of fine detail like wiper blades, door handles and engine parts. I’ve never received a Panda model with any major printing defects or fingerprint marks and that good run continues here too.

The model is not without a couple of minor QC issues however. Fitting of satnav domes is hit and miss across all the manufacturers and especially tricky on smaller models. Here the dome isn’t fitted well on the port side and there is also a small mark on it where it was fitted by hand. In addition the port maingear isn’t fitted perfectly and is a fraction of a mm ahead of the starboard. It isn’t much but is noticeable in closeup – as is a scratch to the wheelhub itself. These are nevertheless very minor criticisms.

There is absolutely no denying this is a fantastic model and clear sign of Panda model’s growing capabilities. So far they have an excellent range of moulds and with such a great range it seems a shame that they mainly produce models for the Chinese market only. Hopefully that will change in 2017, but in the meantime I can’t recommend this model highly enough. Dropping only 3 points it is almost perfect.

Throughout 2018 Panda Models have taken a move away from their traditional Chinese heavy production however their new material has focused heavily on either releases for the Indonesian market or four major European carriers (Easyjet, […]

Aeroclassics is the go to place for models in 1/400 scale that pre-date the turn of the century, and they reliably produce a wide range of interesting and noteworthy airlines on a wide variety of […]