First generation jetliners are nowadays a rare commodity in 1:400 scale from anyone aside from Aeroclassics. In fact, since Witty Wings went bankrupt in 2014 there have been no Boeing 707s from anybody else, whereas Aeroclassics has made more than thirty. That is until 2019 with this release from JC Wings representing the first 707 made by them ever and the first in this scale featuring aerials. It is less of a surprise that it represents a Chinese airline but that does not diminish its value since it is both unique in this scale and historically significant.

In 1984 it was decided that the administrative and airline operations sections of CAAC would be split.  CAAC would however retain responsibility for aviation safety, air traffic control, route entry, pricing levels and financial and safety controls on new entrants. Additionally, other government departments, local authorities and businesses were able to start their own airlines and airports were gradually to be transferred to local authorities.

Aside from the splitting of the CAAC components the first separate airlines were formed beginning with Xiamen Airlines in 1984. The year after Xinjiang Airlines was created and the Shanghai city government and local businesses created Shanghai Airlines. Considering that Shanghai was also the base for China Eastern this was a ballsy move but even at this time Shanghai represented one of the most populous and wealthiest areas of the PRC.

Shanghai Airlines was unique in that it did not source its initial equipment from the CAAC fleet. CAAC already operated a fleet of ten 1972 built Boeing 707-320Bs, but was rapidly modernizing its fleet with almost every type of airliner available, from Shorts 360s to Airbus A310s to Boeing 747s. Shanghai Airlines didn’t have access to this avenue for new aircraft at first and instead had to settle for leasing 5 well used Boeing 707s via International Air Leases.

The 707s joined the fleet between May and October to serve the initial domestic network from Shanghai. They were registered B-2422-2426 but were far from a homogenous bunch. They were all built originally in the 1967/68 period but two were ex-Continental series 324Cs, one an ex-Braniff 327C, one an ex-Qantas 338C and one an ex-Western series 347C. All five had had extensive careers on the second-hand market and all had served with Arrow Air previously.

The 707s were only ever a stopgap type and CAAC had already begun itself to re-equip with Boeing 757s. Shanghai Airlines also got in on this re-equipment and received its first, B-2808, in August 1989. The 707s were returned to their lessors between 1988 and 1991, with only a single frame ever receiving the attractive red scheme the 757s introduced.

B-2425’s career was far from over and she joined Air Tchad as TT-WAB in 1991. She subsequently passed through the hands of a variety of African airlines such as Race Cargo Nigeria (HR-AMA), Affretair (ZS-NLJ) and lastly Occidental Airlines (EL-AKU). She was broken up in September 2000. By this time Shanghai was a major domestic and international carrier with a substantial fleet of 757s, 767s and 737NGs.

From 2008 Witty Wings made a rather obscure range of mainly cargo 707s (branded variously as Aviation400, Apollo or Witty Wings) on an excellent mould that appeared to be a clone of the Aeroclassics mould, albeit one without the cradle mount and associated seam line (similar to what they did with the BigBird 747-200). Since the Aeroclassics mould was already excellent the new mould was even better, however with Witty’s bankruptcy in 2014 the mould was bought up, along with the rest of Witty’s moulds, by JC Wings and seemed doomed to oblivion.

This is obviously not the case, although one new 707 in 5 years hardly resembles a resurgence. Fortunately, JC Wings has found the Witty 707 in its catalogue and not the old Gemini 707, which had wings that were a bit too thick. It is hard to find fault with the fundamental architecture of the mould. The nose, fuselage and tail are all impressive and the wings are well shaped and slot very nicely into the side of the fuselage. 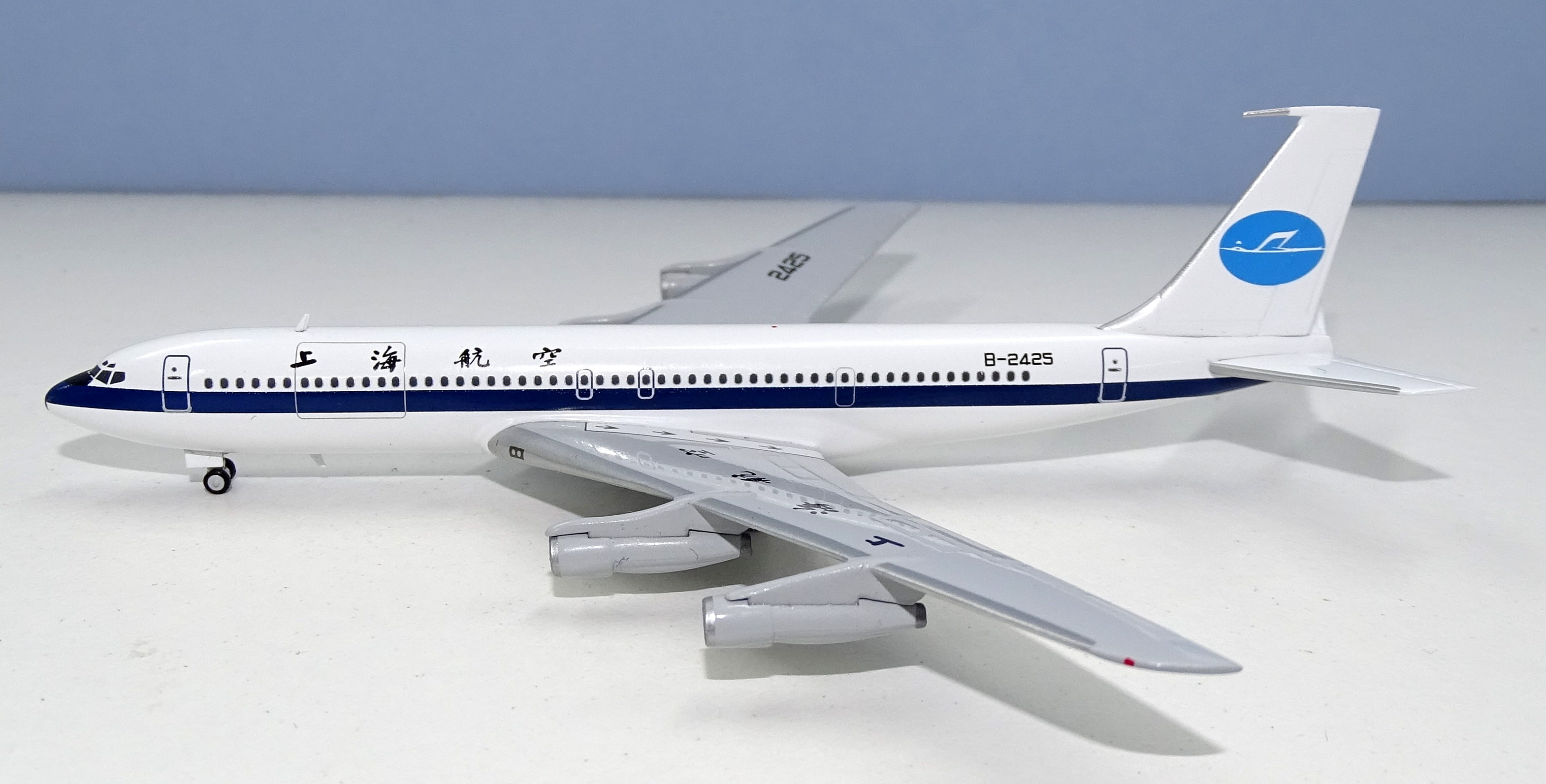 The engines and engine pylons are nicely shaped and the turbocompressors are accurately depicted only on engines 2, 3 and 4 as they ought to be on a 707-320B/C. So overall there are no faults with the mould and in keeping with other existing moulds JC Wings has updated recently (737-200, DC-8, L-1011) they have also fitted aerials (one top and bottom forward of the wing).

The only slight negative is that in keeping with several other mould updates JC Wings has seen fit to add new gears. This is not bad in of itself however I think the old static gears where superior in a couple of ways. Firstly, the angle of the nosegear doors is too level and the nosegear seems to angle too far backwards. This may be due to poor fitting; it is hard to tell. Also, the tyre hub appears a little too large, vis a vis the tyre itself, and the nosegear leg lacks the rearwards process it ought to have.

The early Boeing 707s arrived wearing a simple and rather plain livery featuring a thick blue cheatline with an early version of the airline’s crane logo on the tail in white and blue. The titles looked particularly haphazard with simple text in English on one side and Chinese on the other. At the time having your own livery was relatively controversial in China so it is no surprise that the livery didn’t stand out anymore than saying ‘we are not CAAC’. Fortunately, the 757s would introduce a vary attractive red scheme, but only B-2425, among the 707s, would ever wear it. 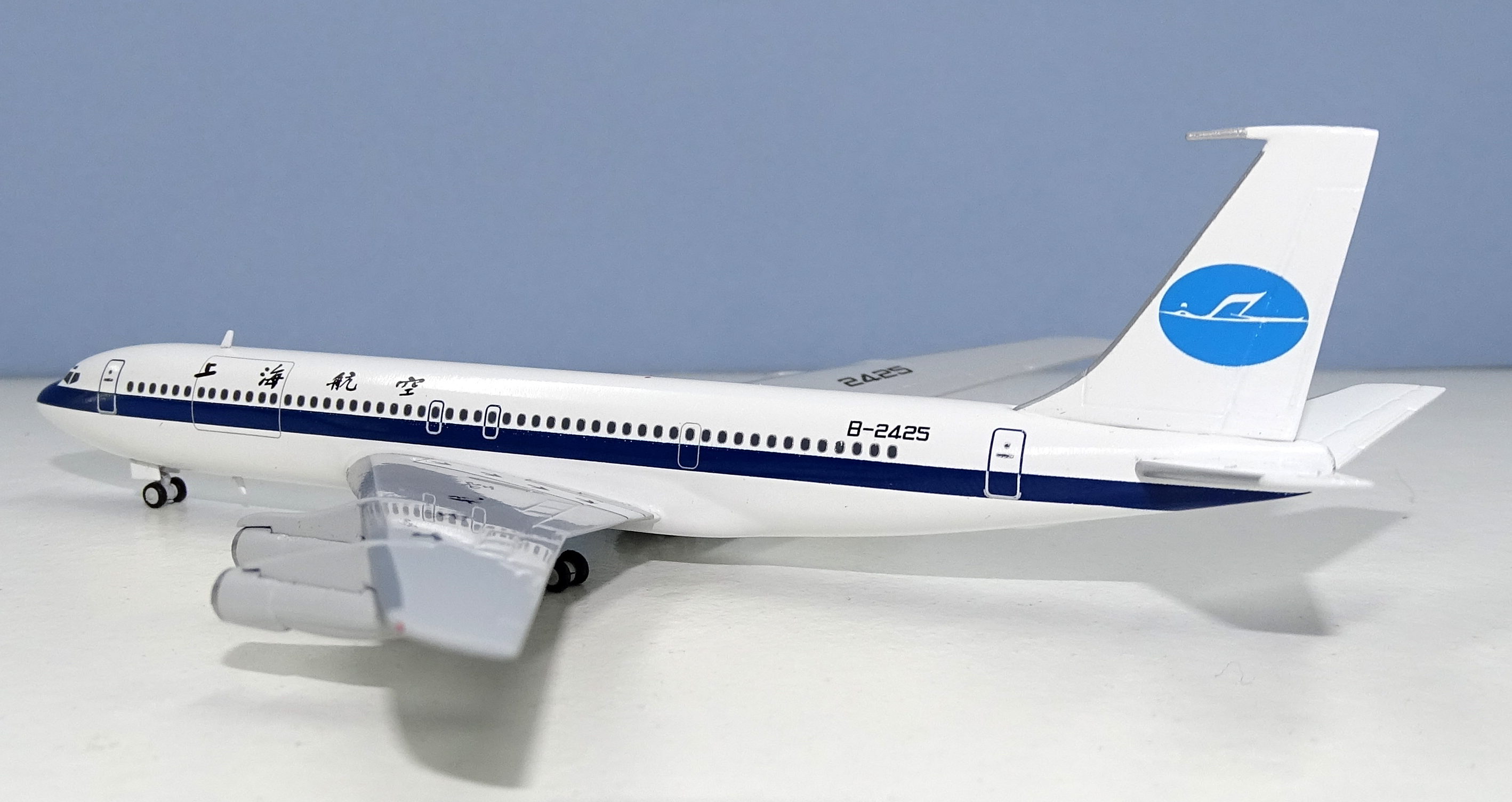 Photos of the 707s in FM colours are hard to come by and it seems that at least the first aircraft (B-2422 – later N707HG) wore different Shanghai Airlines JV titles for her entire time with Shanghai. From the photos that do exist it is evident B-2425 wore larger SHANGHAI AIRLINES titles herself. The model accurately depicts this and in fact the placement of the livery and the colours used are spot-on.

Likewise, B-2422 had a smaller tail logo and thinner Chinese titling on the port side. B-2425 definitely had the larger titles (as correctly depicted on the model) and I have no reason to suspect the models thicker Chinese titles are also correct (although I have no photo proof of that side of the aircraft).

Despite its simplicity this is actually quite a modern livery for a 707 since it has an all-white belly rather than natural metal and painted grey wings and engines. With the limited evidence I have I can’t prove that the wings are correctly coloured but I’ll give the benefit of the doubt. 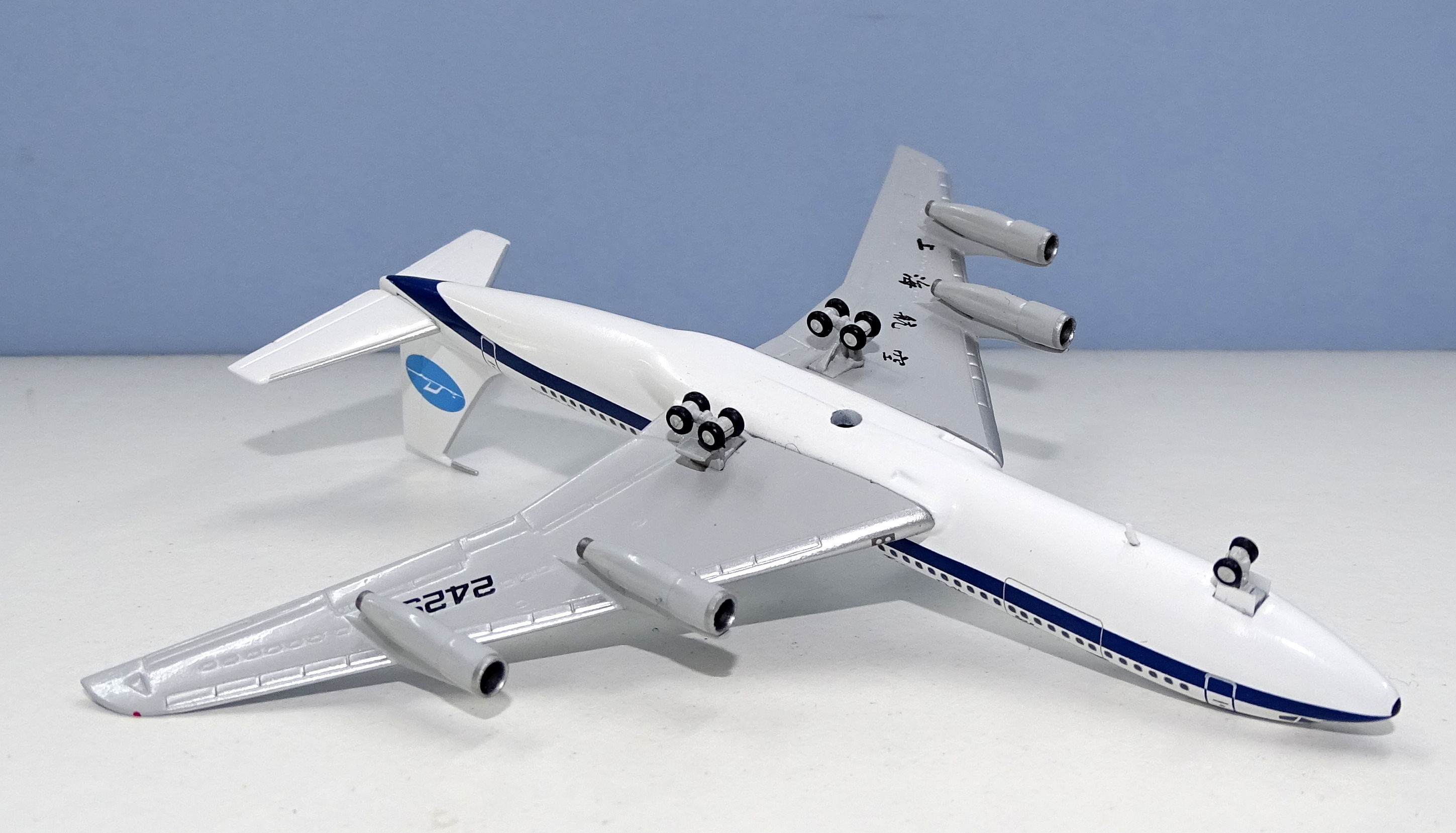 Printing on the model is solid and captures all the important details like the large side cargo door typical of a 707-320C and the small hat-rack door aft of the wing. There is some nice detail printing, like the wing root landing lights but I’m not convinced that the cockpit windows aren’t a shade on the small side.

The model is well built and tightly put together. From the front the rims of the inboard engines are rather poorly shaped and finished. I’m not sure if this is excess paint or a mould issue.

One last point is that this model is so white it is a little painfully clean. I doubt even factory fresh 707s were ever this clean and perhaps it would be nice to see some dirt and weathering on the engines and belly for older types. Just a suggestion.

This model continues a trend of relatively obscure Chinese historic releases, which I hope to see continue with some CAAC and China Northern MD-80s. It is a pleasure to see JC Wings experiment with something more historic than a 787 and they have done a great job with this model. If they can find a shot of the only 707 in the Shanghai red colours that would be a most welcome partner for this aircraft.

NG Models have shaken up the mainstream 1:400 manufacturers to the extent that they have gone on the attack, either by trying to block their sale or by attacking positive reviews. The simple fact of […]