The rugged and efficient DC-6B saw service across the globe from flying First class passengers on its debut to hauling cargo of questionable legality later in its twilight years. The type was used by a wide range of airlines and many aircraft had interesting and unique careers. It is only thanks to Aeroclassics in 1:400 scale that these veteran types get any exposure and the Six wears the Golden tail of Continental beautifully.

Bob Six’s Continental Airlines was heavily involved in operations in the Pacific during the 1960s to support the war in South-east Asia. Not only were Continental’s Boeing 707s regularly utilized on cargo and troop transportation duties but they were actually the most common civilian visitors to Saigon’s Tan Son Nhat airport. In 1965 Continental set up a subsidiary operation, Continental Air Services (CASI), with which it used a wide range of aircraft types including C-47s and C-46s to fly operations for the US government, USAID and CIA in support of the wars in Vietnam and Laos. 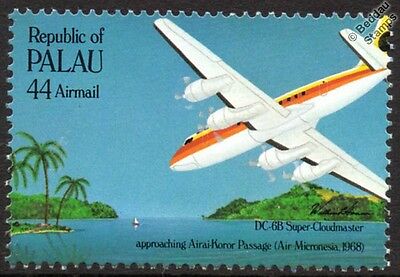 Alongside his patriotism Six was also interested in securing future civilian routes in the Pacific and part of this included promoting services in the US controlled islands of Micronesia, at the time known as the “Trust Territory of the Pacific Islands”. Given their close contacts with the US government it was not surprising that Continental was able to acquire the rights to fly a selection of island-hopping routes between Yap, Majuro, Saipan and Guam.

Air Micronesia was formed as a joint venture between Continental (31%), Aloha (20%) and the United Micronesia Development Corp (49%) using Continental Airlines certificate, personnel and equipment. It became known as Air Mike and started operations on May 16, 1968.

The initial equipment was a single Boeing 727-24C, Douglas DC-6B and a pair of Grumman Albatrosses. The propliners were required due to some of the primitive conditions available for service in the islands. The DC-6B ‘Super-Cloudmaster’ was registered N90961 and had been delivered new to Continental in January 1955. She was in fact the aircraft used in a mixed colourscheme for the Continental/United interchange route. By this time, she had been fitted with a large cargo door on her port side and considering all of Continental’s other Douglas props were long gone by this time it is likely she had been in service with CASI prior to Air Mike. 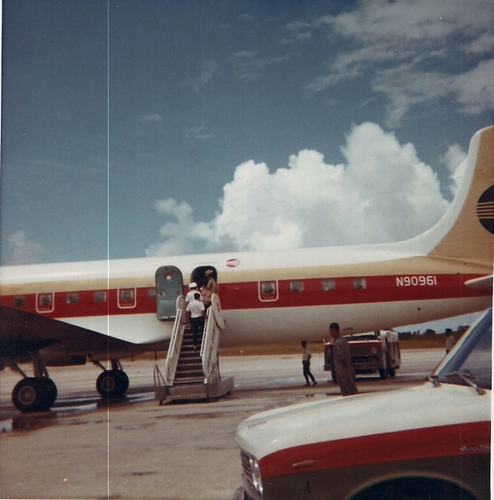 It had never been the intention for Air Mike to use the piston propliners for long but, however N90961 continued in service until 1972, although she wasn’t returned to the USA until 1975. Stored at Oakland she was sold to a company called Aerospace Products in 1978 and in August 1979 she was impounded at Bogota’s El Dorado airport. One can only speculate as to why this is but I suspect it was related to the illegal transportation of narcotics. 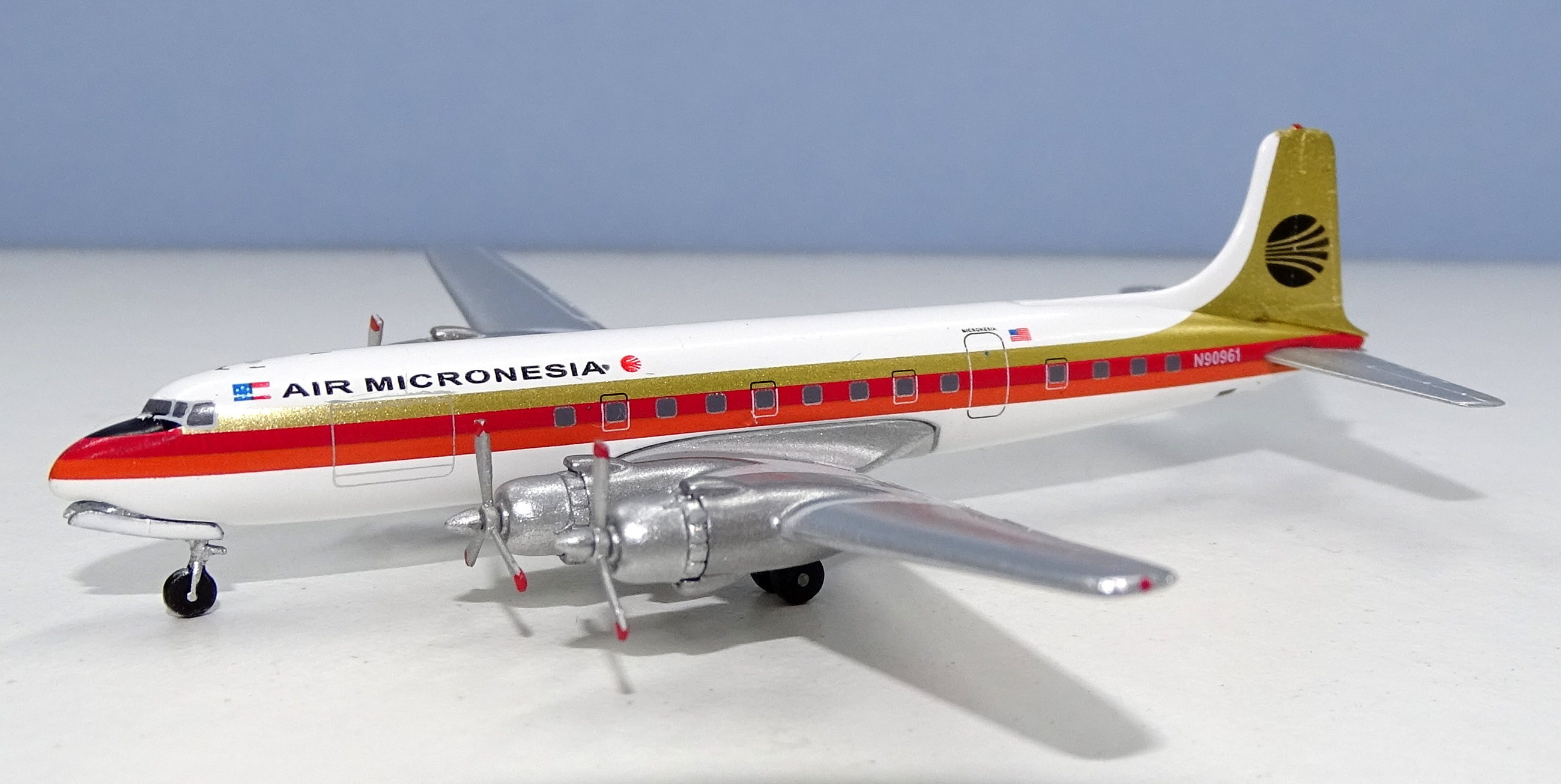 Aeroclassics is actually onto its third DC-6 mould as it created its first back at the dawn of the 1:400 age prior to the usage of Tampo printing. The second mould appeared in 2004 and to be honest wasn’t a sizeable improvement partly because of a square cut wing seam cradle mounting (similar to several other early Aeroclassics prop moulds) but mainly due to a rather inaccurate nose region.

Fortunately, in 2010 Aeroclassics produced a new casting which along with its equally good DC-4, DC-7 and DC-7C moulds mean they have an exceptional line-up of Douglas props to call upon. The initial releases had a longer radome but all those since 2014 have a rounder stubbier nose – both are accurate for a DC-6B, however in this case the longer nose would be more accurate for a late Continental DC-6B. I get the feeling the long nose casting is no longer available. 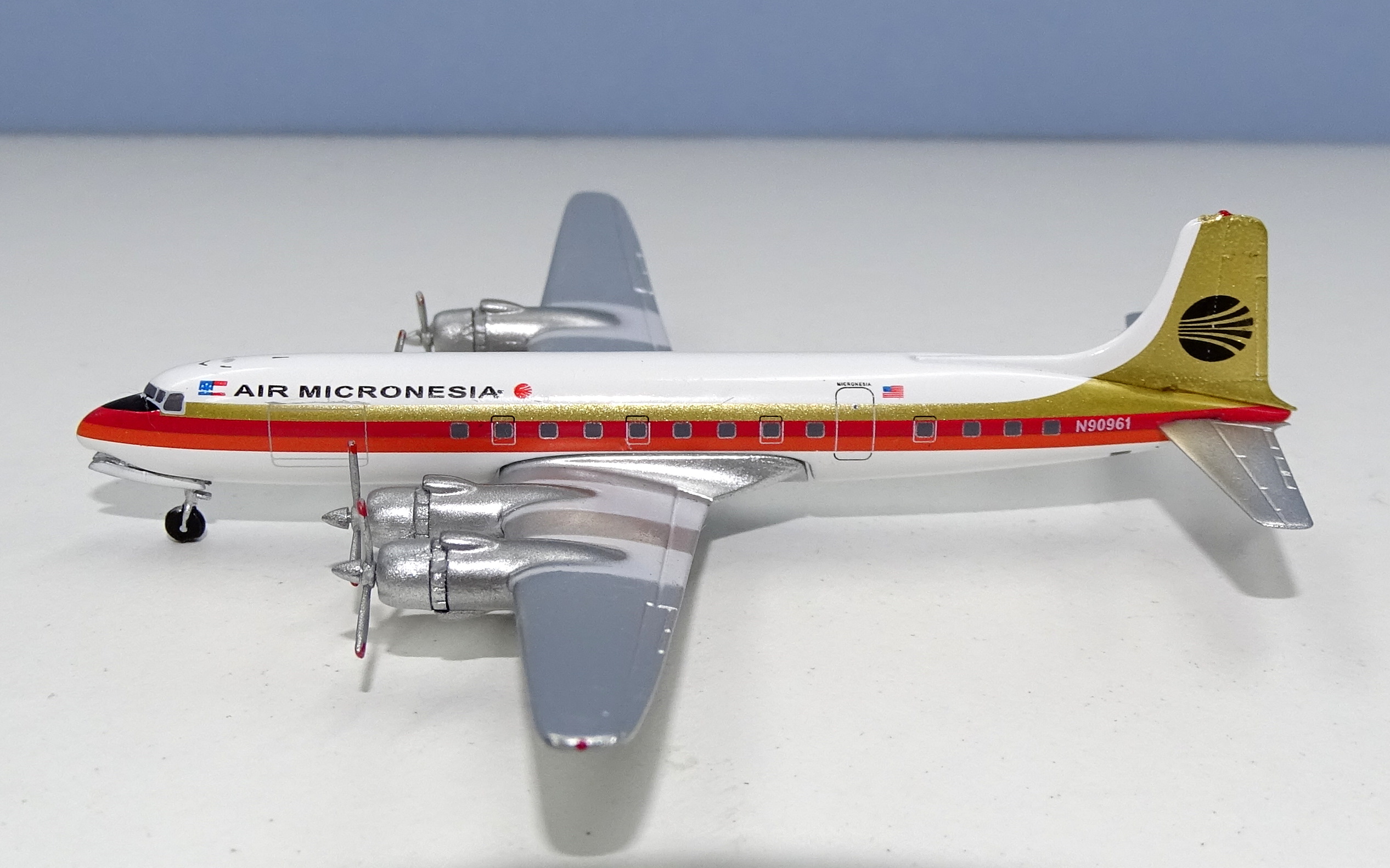 The mould is very good. The nose and cockpit region is perfect, whilst the long thin nosegear bay doors and nosegear itself are finely detailed and remarkably robust. No need for rolling gears here and the aircraft is better for it.

There is a small seam line (as this is still a cradle mould) but it is discrete, following the wing and not an issue. The wings are great and as Aeroclassics commonly does with its props the engine cowlings are plastic addons, which allows for greater detail. Lastly the rear fuselage and stabilizers are pretty much perfect. There really isn’t anything substantial to complain about with this mould. It is one of the best and would garner a perfect score if it had the longer nose.

As far as I am aware N90961 was the only propliner to wear a version of the classic Saul Bass meatball scheme introduced by Continental in 1967 (it is possible some CASI aircraft wore it also). As you would expect the big Six looks awesome wearing the wonderful red, orange and gold livery, which aside from the titles and flags looks almost identical to the mainline airline’s.

There are not large numbers of images of this aircraft and several are partials and undated. Given it’s four years of operations it is possible there are a couple of scheme variants. The cheatline colours and tail of the release are excellent. The gold is especially crisp. Position of the meatball on the tail is good and so is the cockpit anti-glare mask. 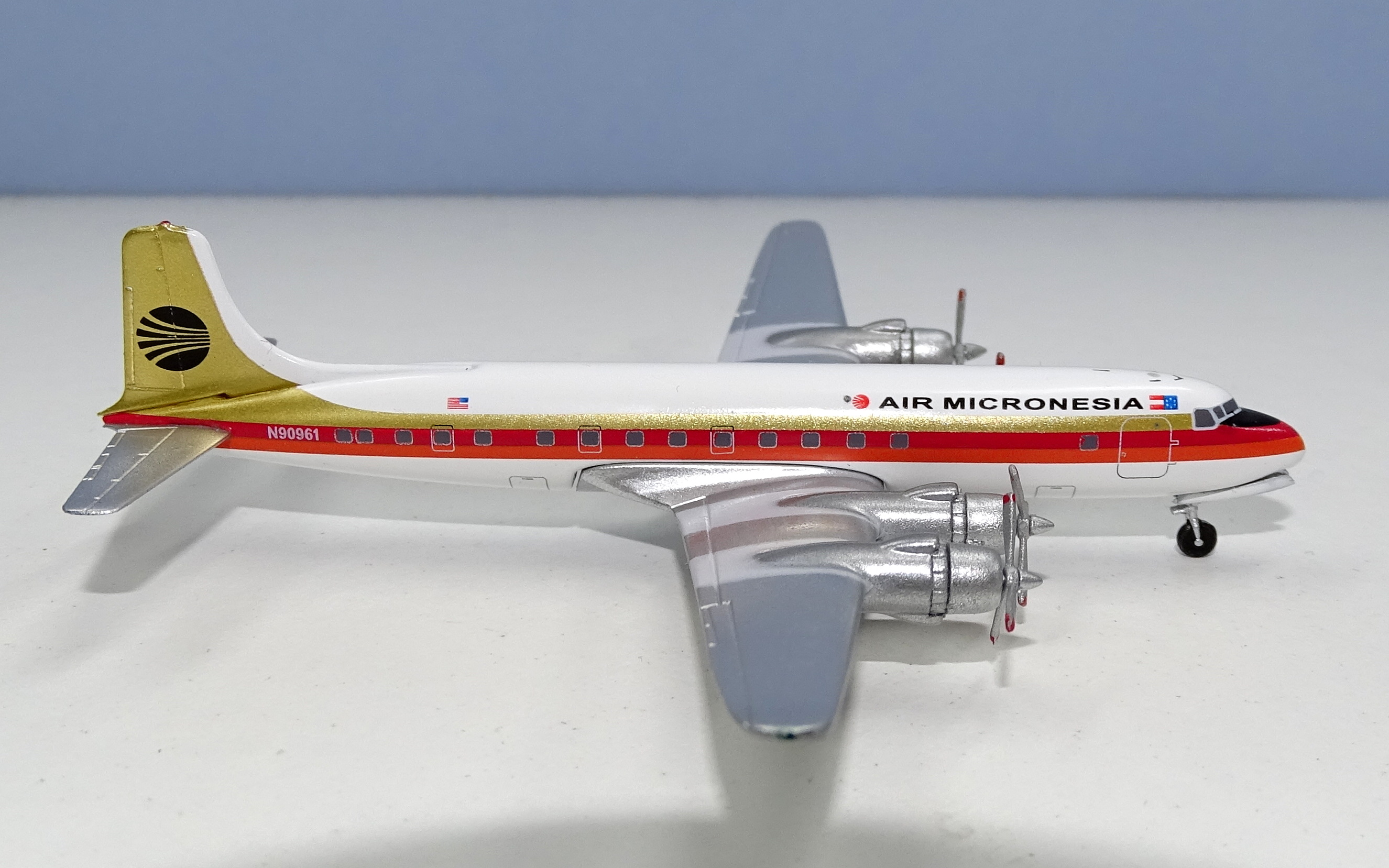 The titles are well sized but unfortunately are using the wrong font. The letters are too rounded unlike the slightly flattened lettering style that Continental actually used. The mistake is repeated with the registration, which also is too rounded. I’m not thrilled with the Micronesian flag forward of the titles either, it is too tall and the lower red line is too thin. 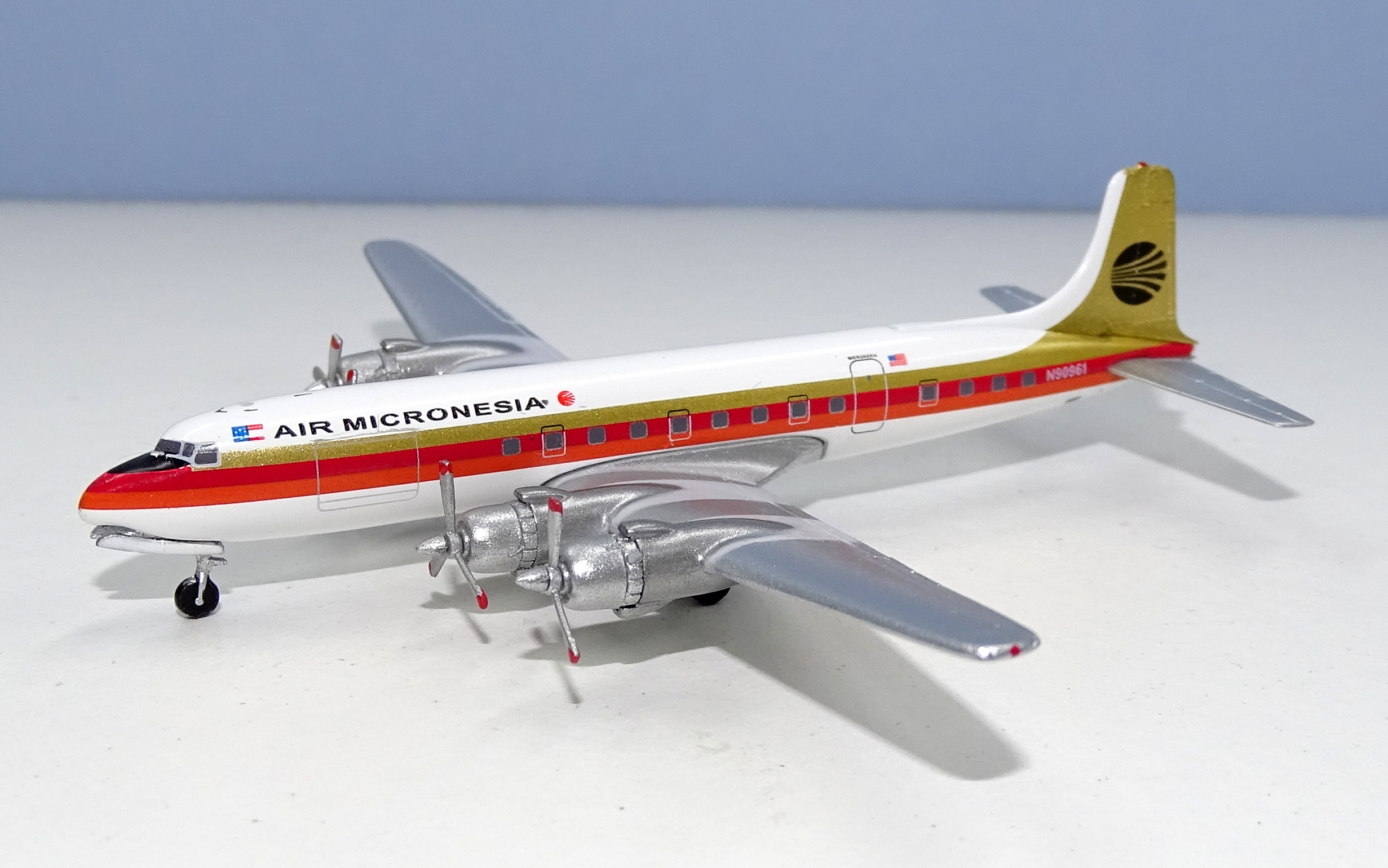 At the rear passenger entry door the model has the US flag, whereas it ought perhaps to have the red meatball logo (as it does correctly after the main titles). This is where the possibility of livery variants comes in. The best photo of the aircraft has the Saul Bass logo after the titles and the rear door obscured by the wing. Partial other photos seem to show the US flag after the main titles but definitely show the Saul Bass at the rear door. I’m leaning towards the model being a correct version of the aircraft at a point in time and at some point the logo and flag were swapped. 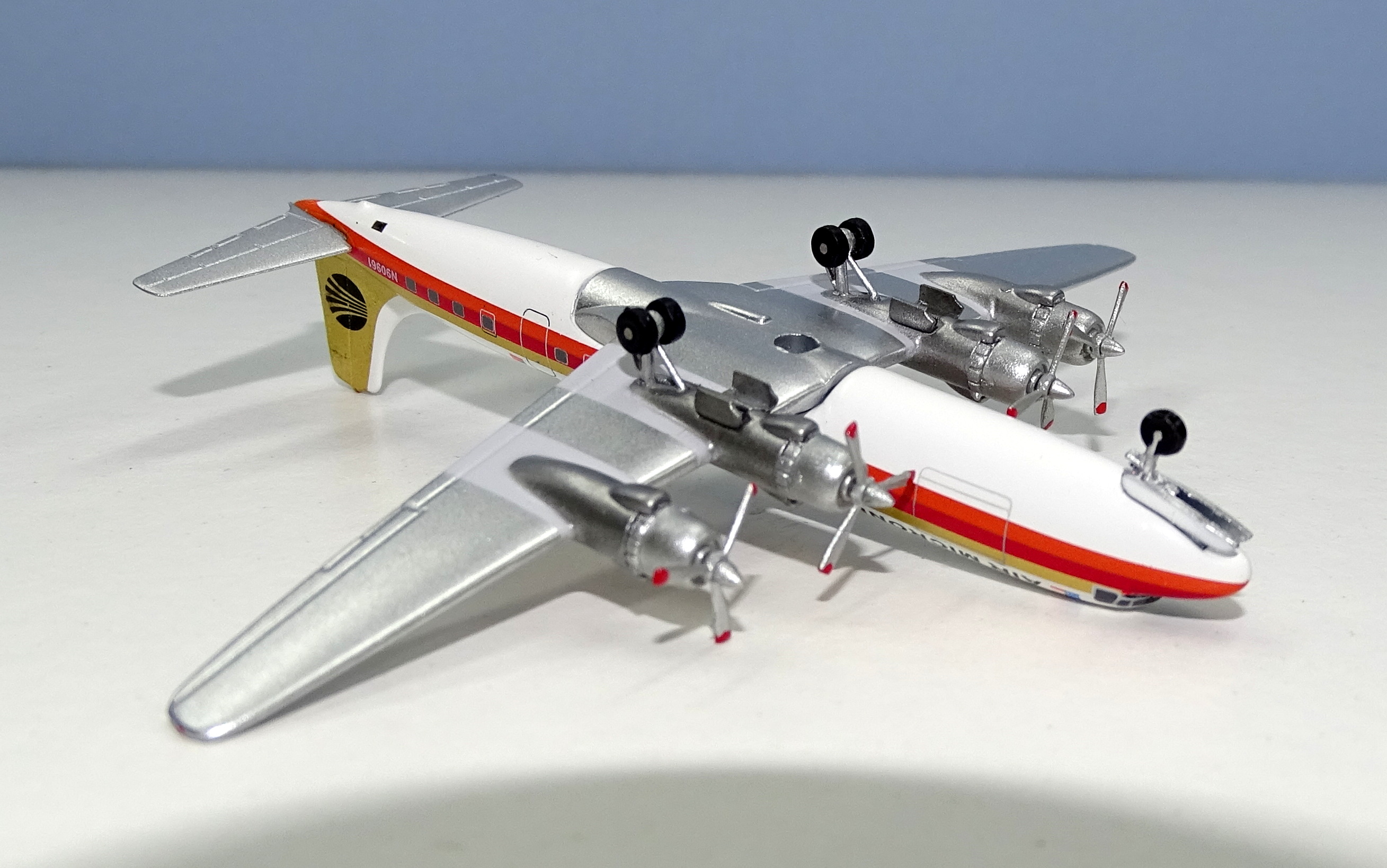 The level of printing detail required on old prop-liners is a lot less than on modern types and in this case the mould has detailing for control surfaces so they don’t need to be printed. Even so the printing present (things like the forward aerials, and belly cargo doors) is fine and there are no print quality problems. The large port side cargo door and emergency exit window markings are well done. Painting detail is also good, even on the nosegear where the black painting is sometimes rather hit and miss on Aeroclassics props.

The mould is relatively simple to construct, that is if it weren’t for the multi-part engine assemblies. On this model all four engines are perfectly constructed and look excellent. The only critique is that the one-piece slot in nosegear and bay doors has not been fully pushed in at the tip of the nose.

Aeroclassics can certainly do prop-liners, often better than it does jets. Along with the other three recent Continental DC-6 releases, one of which was this frame in the mixed CO/UA interchange scheme, this model makes an excellent addition to my Continental collection. It also demonstrates some of the challenges of making older models with very limited reference material, in that sometimes certainties about the look of the aircraft are hard to come by.