It is easy to give Phoenix a hard time over the relative lack of diversity of many of their releases but then again, I do collect modern Chinese airliners, it’s a big market and many of them have special schemes as well. So perhaps I should take it easy criticising them? Maybe not, where would be the fun in that! Either way I love to see diversity even if it is just in the different Chinese airliners made and Chongqing Airlines is one of the smaller airlines on the scene.

As its name suggests Chongqing Airlines is based at Chongqing Jiangbei International Airport. Chongqing (formerly Chungking) is a major city of over 28 million in Southwest and one of five national central cities in China. The airline began operations on July 8, 2007 connecting Chongqing with Shanghai Pudong. Operations now encompass a significant portion of China from Lhasa to Beijing to Xiamen from its Chongqing hub.

Chongqing Airlines is one of the smaller components of the China Southern stable, being one of many joint ventures between the government owned big 3 and local government driven companies, in this case the Chongqing Municipal Development & Investment Company. So, you could argue it is the government pairing with itself in the end, but there is little in China that doesn’t have the Chinese Communist Party involved at some point.

Growing the relatively poor and sparsely populated Western regions of China has been one of the nation’s main aims in recent years and Chongqing is a key element in that. It is a highly competitive market and China Southern decided in 2014 to begin converting the previous middle market airline into an LCC of sorts. Out went business class for all economy, however some aircraft still operate in a 3-class layout and there seems to have been a lack of progress towards implementing the transition. It may even have been abandoned as several new aircraft switched from the China Southern fleet are configured in a distinctly non-LCC layout.

Growth has nonetheless inevitably followed, this is China after all, and from 11 A320 family aircraft in 2014 five years later there are 28; a spread of 8 A319s, 14 A320s and 6 A320neos. The airline has several special schemes and B-6761, a 2011 build ex-China Southern frame, was repainted into one when she was transferred over to Chongqing on April 12, 2017. The scheme is known as ‘Meihao in Chongqing’ or ‘Beautiful in Chongqing’ in English. 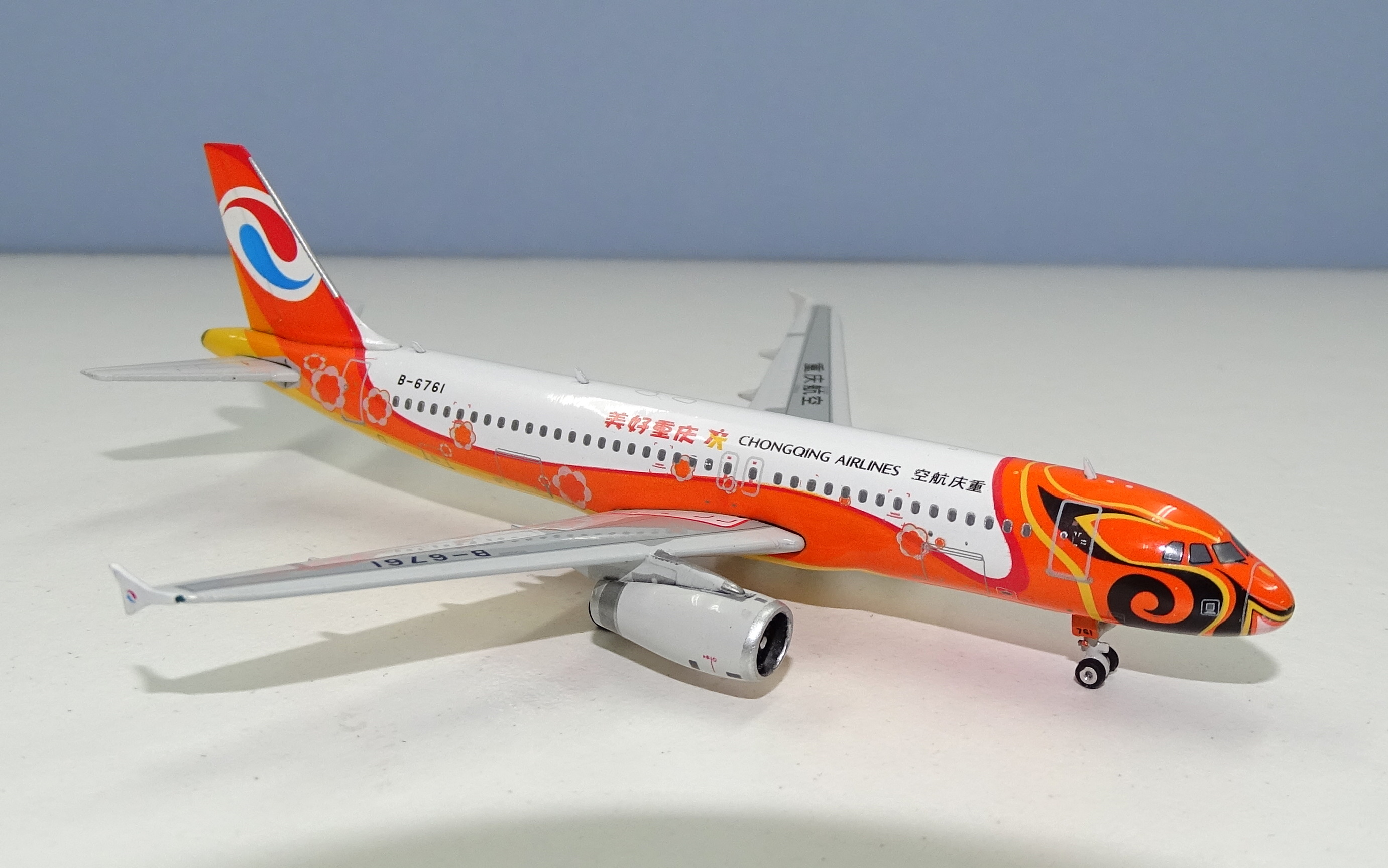 The Phoenix Airbus A320 is a solid mould and shares the majority of its characters with their A321, however fortunately it doesn’t share some of that mould’s failings. Somehow the shorter length of the A320 works in the moulds favour and it looks more like an A320 than the slightly TU-204-esque A321 mould. It also has correct wings, unlike the A321.

The nose of the mould is good, perhaps a little too heavily rounded, but not enough to cause any alarm. The nosegear is also a strong feature, with its length and tyre size in correct proportion to the fuselage. Close up the gearleg is a bit chunky and undefined but this is a minor complaint. On the plus side the undercarriage is a good length meaning that unlike on the Aeroclassics A320 the engines have excellent ground clearance. The IAE engines on both Phoenix and Aeroclassics A320 family aircraft are well shaped but admittedly slightly too large.

Being a modern mould, this is a slot in wings model, which means no ugly seam line, however the worst failing of the mould is at the wing join. Phoenix don’t do enough to accentuate the wing/body fairing and the mould is a little slab sided, especially just above the wing.

Moving towards the rear of the fuselage and the Phoenix A320 scores highly; the maingear, tailcone and vertical stabiliser are excellent whilst the aerials are present and well sized. At least four of them are anyway – the smallest aerial on the forward belly is absent. 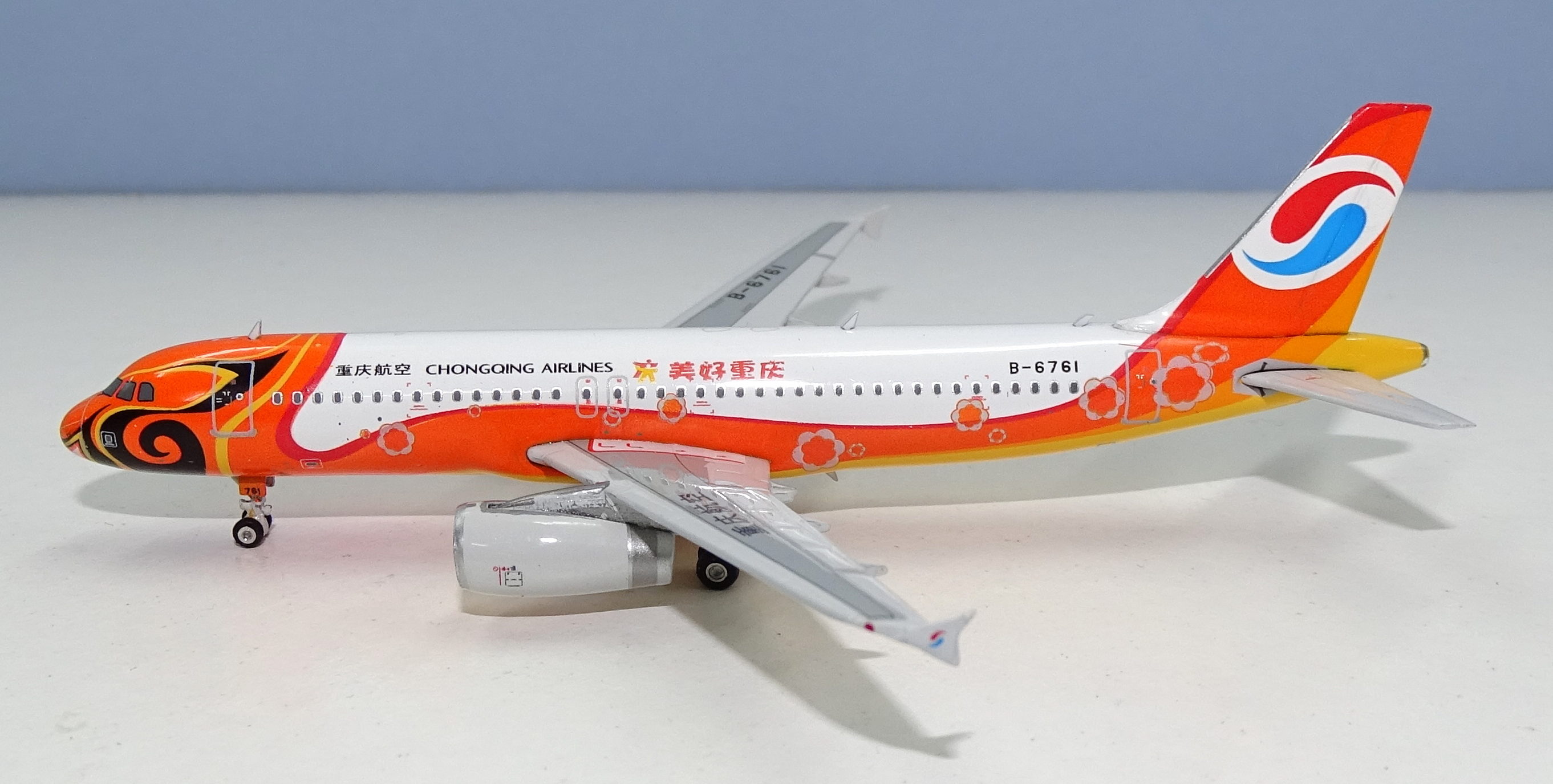 I have absolutely no problem with buying the Phoenix A320 (unlike all their Boeing 737s including the MAX). It is marginally inferior to the Aeroclassics and Panda offerings but not to the extent that the JC Wings/Gemini mould is. For a detailed comparison of the A320 moulds available in 1/400 scale see:

Phoenix like Chongqing Airlines and this is the fourth of five released 1:400 scale aircraft made by them. JC Wings have also announced this livery, but as per usual the arrival of the model has been much delayed. I own all 5 of the 1:400 models made and the Phoenix A320s, which constitute 3 of them complement each other really well. This livery features Sichuan Opera props painted on, which give the aircraft an animalistic mask look. Formerly Chongqing was part of Sichuan until it was separated out in 1997.

Whatever way you look at it this is an attractive scheme and nicely incorporates the standard Chongqing Airlines tail logo. It is also a complicated scheme to reproduce but Phoenix have done well. Firstly, the four main colours of red, orange, light orange and yellow are all accurate. The tail is also well done and the placement of the components of the livery on the fuselage is good all over except for one spot. 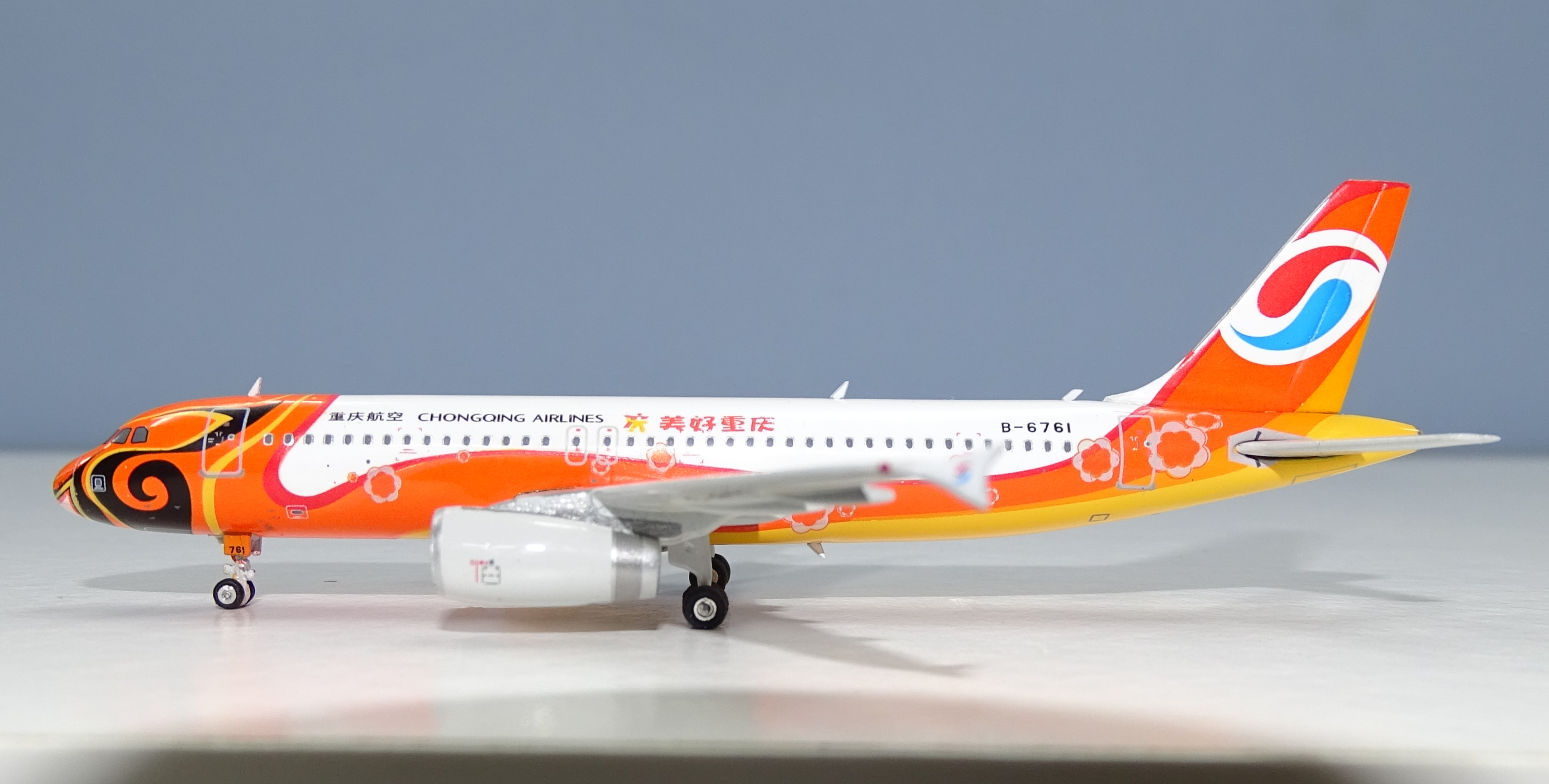 This is at the front of the fuselage near the roof. On both sides the red and orange lines do not recurve forward strongly enough, but it doesn’t have a major impact on the model. The black and yellow detailing at the nose, which looks like a mask to me, is nicely done.

Small details like the rego on the nosegear doors, Chongqing logo on the winglets and the intricate titles are very good. My biggest criticism of the livery adaptation is the rosettes along the fuselage side. They are all accurately placed but the grey colour and outlining used makes them blend into the rest of the scheme and they are hard to see, whereas on the real thing they stand out quite well. Overall this is a solid livery replication. 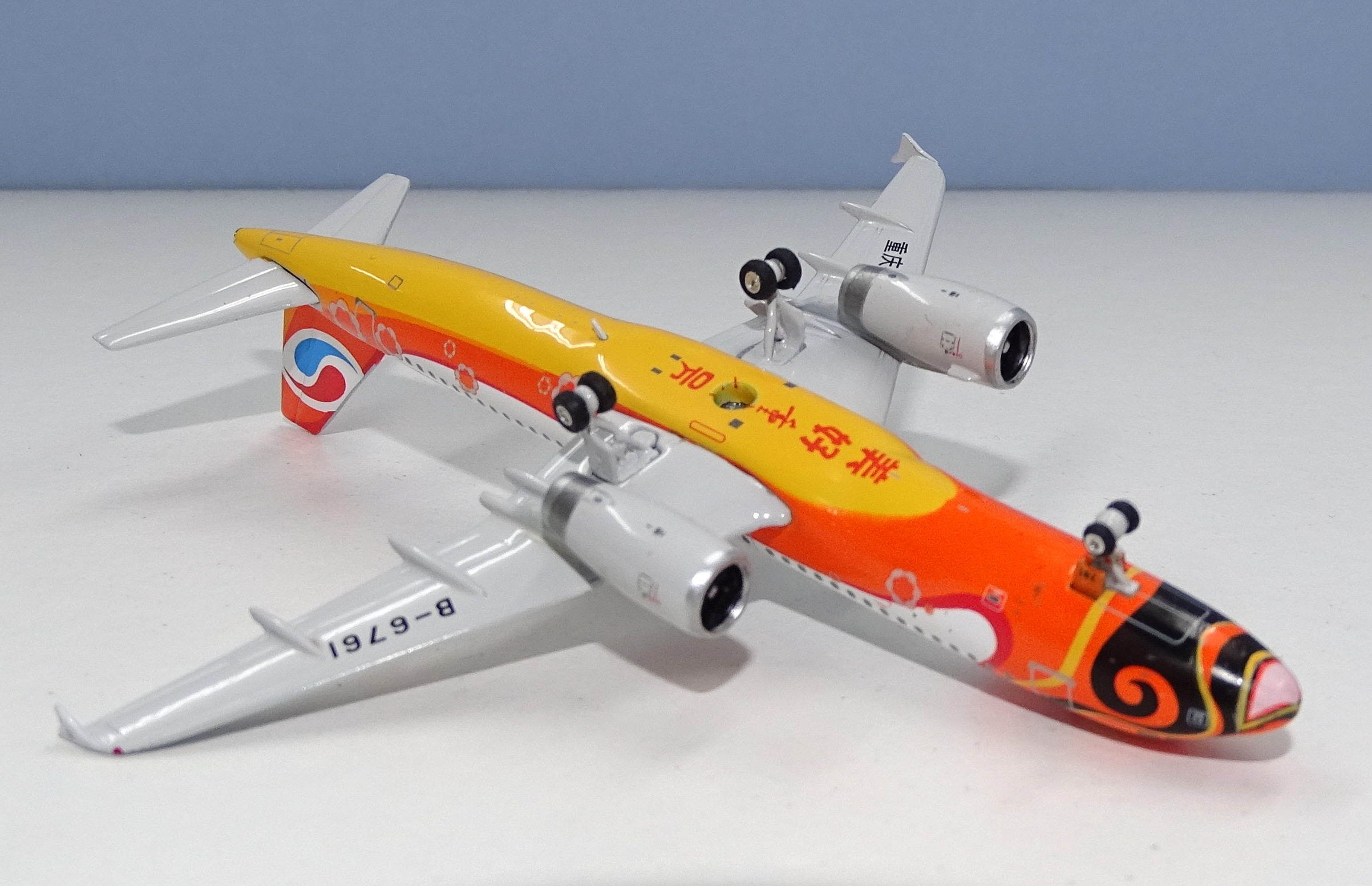 The printing on this model is exemplary. There are no printing defects and the detailing is strong, something that I don’t often say about Phoenix models. Even the underside is well detailed and the engine nacelles also have unusual levels of printing on them. One minor point is that the nosegear hub on this aircraft should be white whereas Phoenix have stuck with their trademark natural metal.

From the front the engine fanblades are a nice dark grey and look great. Something that does puzzle me a little is that the livery lines are a little asymmetric at the nosetip. I’m not sure why this is but I doubt it is a feature on the real thing. It isn’t noticeable from the sides.

It’s not often you can say this but this model is well built and has no construction problems whatsoever.

Phoenix can make Airbus A320s and unlike all their other narrowbodies I am more than happy to purchase them. It is pleasing for me that I know have 3 Chongqing A320s made by Phoenix so they all have the same look, and they are in no danger of being replaced by other manufacturer’s versions. Certainly, compared to the usually delayed and ugly JC Wings A320 the Phoenix version is one of Phoenix’s few remaining highlights of their mould catalogue.

The May Aeroclassics releases have been announced and bring a bounty for both the classic and modern collector. On the one hand there are NEOs aplenty and on the other the return of excellent GSE. […]

Chengdu Universiade: Sichuan Airlines Airbus A330-343 B-5945 by Phoenix

I admit I give Phoenix Models a bit of stick, and I continue to be perplexed why they appear so popular amongst collectors when most of the time there are superior alternatives. It isn’t like […]