1:400 scale has been a hotbed of innovation in recent years, which has been a joy to behold. There has been Phoenix with spinning fanblades, JC Wings with flaps down, AV400 with beacon lights and Gemini Jets with opening cargo doors. It has also been great to see manufacturers experimenting with unusual one-off or more obscure models such as the Beluga XL (NG Models and JC Wings) and the Honeywell 757 (NG Models). Aviation400 has shown a tendency to push detailing to the limit and although military aircraft do not fit my collecting criteria it is hard to ignore the trio of A330MRTTs released recently, which push the boundaries to mould modifications beyond anything attempted before. It is a pleasure to get to review one of these models – sent to me by AV400 themselves.

The A330 has proven itself to be one of, if not the most, capable and versatile mid-range twinjet widebodies ever made, surely far outstripping Airbuses original hopes for the type. It is certainly a superior frame to the standard Boeing 767-300 and so there is no surprise that the A330 has acquired the attention of military customers looking for a multi-purpose aircraft capable of operating as an air to air refuelling tanker or a transport.

The A330MRTT is the military derivative of the A330-200 passenger version and can flexibly be equipped with a variety of different systems for the air refuelling role, be these the Airbus Military Aerial Refueling Boom System (for receptacle equipped aircraft) or Cobham 805E and 905E units (probe equipped aircraft). Since the A330 already shares a wing with the four-engined A340 it already has reinforced areas for the mounting of additional pods underwing and so the standard wing requires little modification for hardpoints.

The aircraft are built to civilian standards and then flown to the Airbus Military Conversion Centre in Getafe, Spain for addition of the refuelling systems and military equipment. Orders have been brisk, with the type only losing out to the 767 in Brasilian and US bids (the latter heavily biased towards the Boeing product). Australia was an early customer and took delivery of the first A330MRTTs in June 2011.

The type is designated the KC-30A in RAAF service where 7 aircraft serve with No 33 Squadron based at RAAF Base Amberley. In Australian service the KC-30As have both the rear fuselage mounted ARBMS boom and underwing Cobham 905E pods. Development was delayed by two years due to delays in developing the ARBMS. This airframe, A39-003, flew for the first time as early as October 24, 2008 but wasn’t delivered to the RAAF until May 30, 2011. Initial operating capability of the type was secured in February 2013 and the KC-30As now provide the core of Australia’s airborne refueling and long-range transport needs.

As of January 2020, the A330MRTT had secured orders for 60 aircraft from 11 Air Forces and the type seems likely to secure further orders when up against the KC767. Certainly, the RAAF KC-30As have found themselves busy with deployments to the Middle East in support of Australian foreign policy as well as peacetime duties. 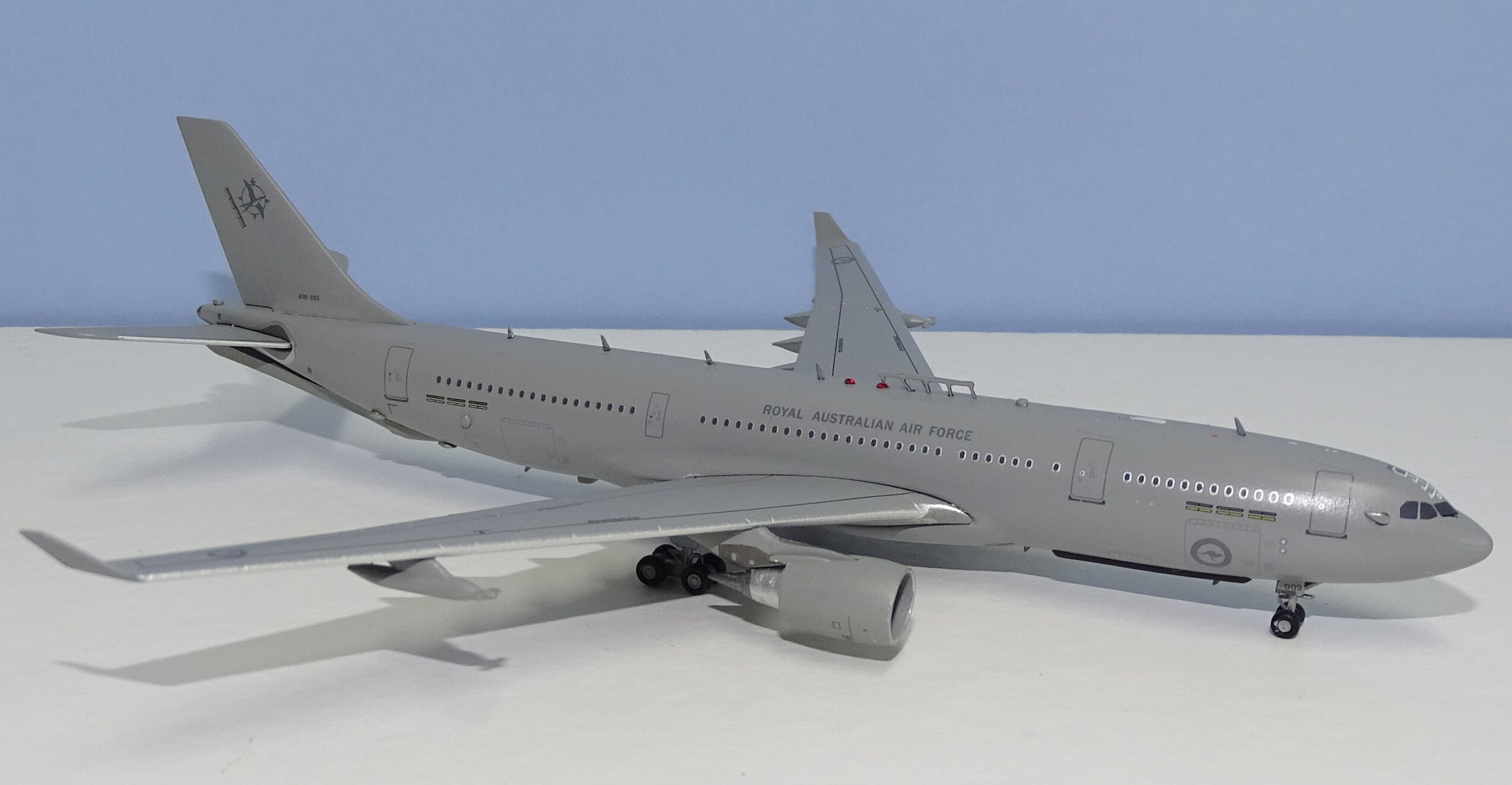 I have reviewed two Aviation400 A330s previously and I have to admit I haven’t been overly impressed with either. My biggest issue with the civilian versions has been the shape of the nose and the form of the undercarriage. I do think this military version has seen some modification. The nose looks better, albeit it is still a little too blunt, and certainly the size of the nosegear tyrehub has been decreased. Both changes improve the look of the front of the aircraft substantially.

Other issues I had, on the previous review, were the hanging and ground clearance of the Rolls-Royce Trent engines, but this RAAF version is equipped with the CF6-80E1A3 and I have to say that the issues of the RR equipped model are not present on this GE equipped one. The engines hang very nicely and the pylons are good. The engine nacelles themselves are very nicely shaped, although unlike the Trents they are not see through and instead have solid cores. This isn’t an issue for me since the fanblades on see through engines are rarely accurate anyway.

The rest of the standard A330 fuselage is accurate, as are the control surfaces. I still think both the main and nosegear are on the short side but engine ground clearance is good anyway. The standard A330 is equipped with the navigation beacons that are fitted to all AV400 releases and this modified mould actually has four (two above and two below). They look better on the military A330 than on the civilian one. So even without discussing the military additions this mould is looking better than it did previously.

Of course, if you are buying this model one of the reasons is because of all the additional extras. Even if I count the ARBMS and underwing pods as single components then by my count there are 29 separate bumps, aerials, antenna and pods on this model, not counting the navigation beacons. This is an extraordinary level of detailing, the likes of which I have never seen in a 1:400 scale product. 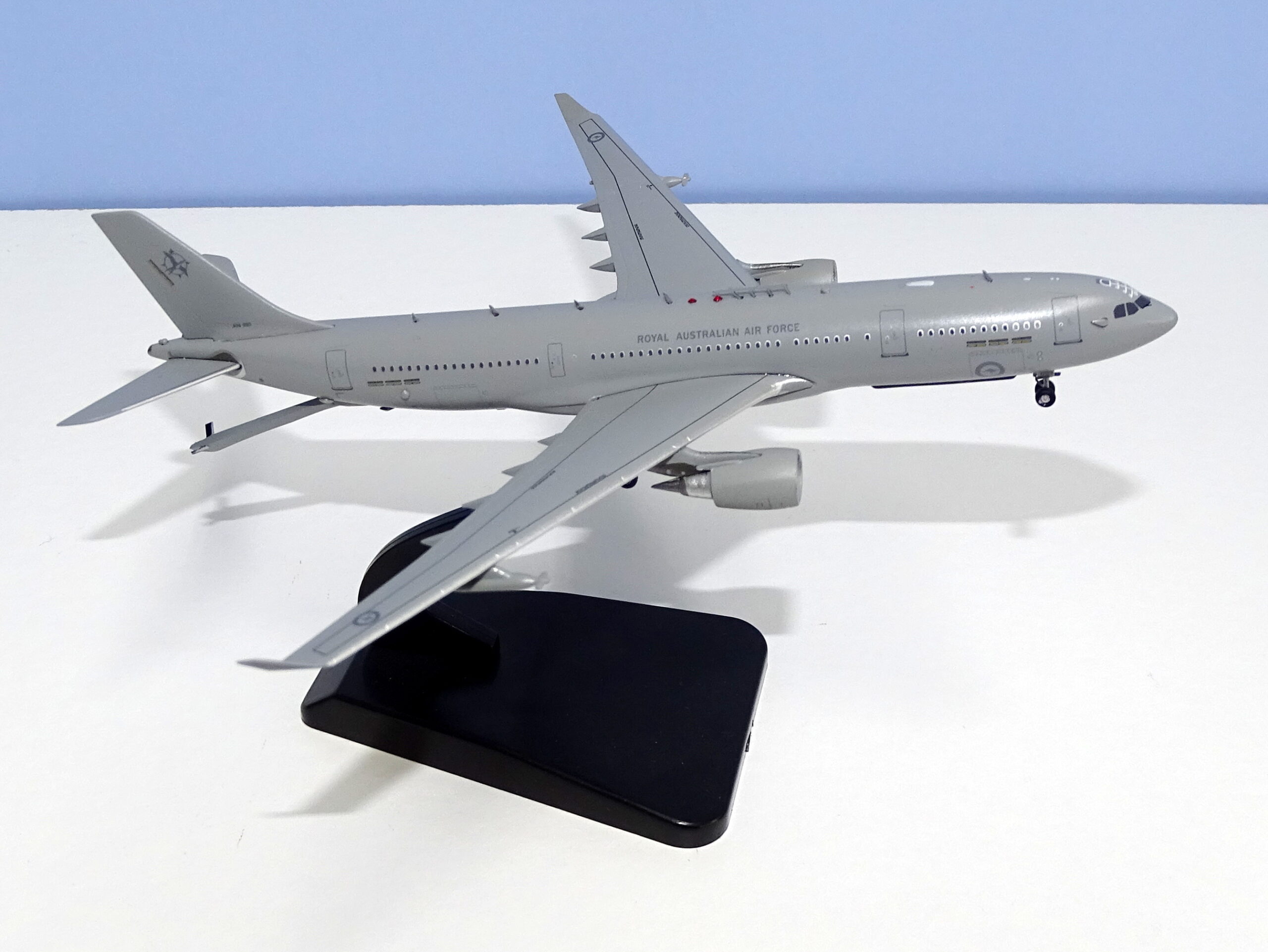 The shape and accuracy of the main refuelling pods is superb. The Cobham 905E underwing pods come with the small prop at their nose and angle nicely to the squarely cut-off rear – see here for an image of the pods. The ARBMS tail boom is even more impressive. The shape is spot on and not only can it be moved up and down but it can also be turned from side to side. When stowed it sits nicely up against the fuselage underside and when deployed it can be moved into multiple different positions. 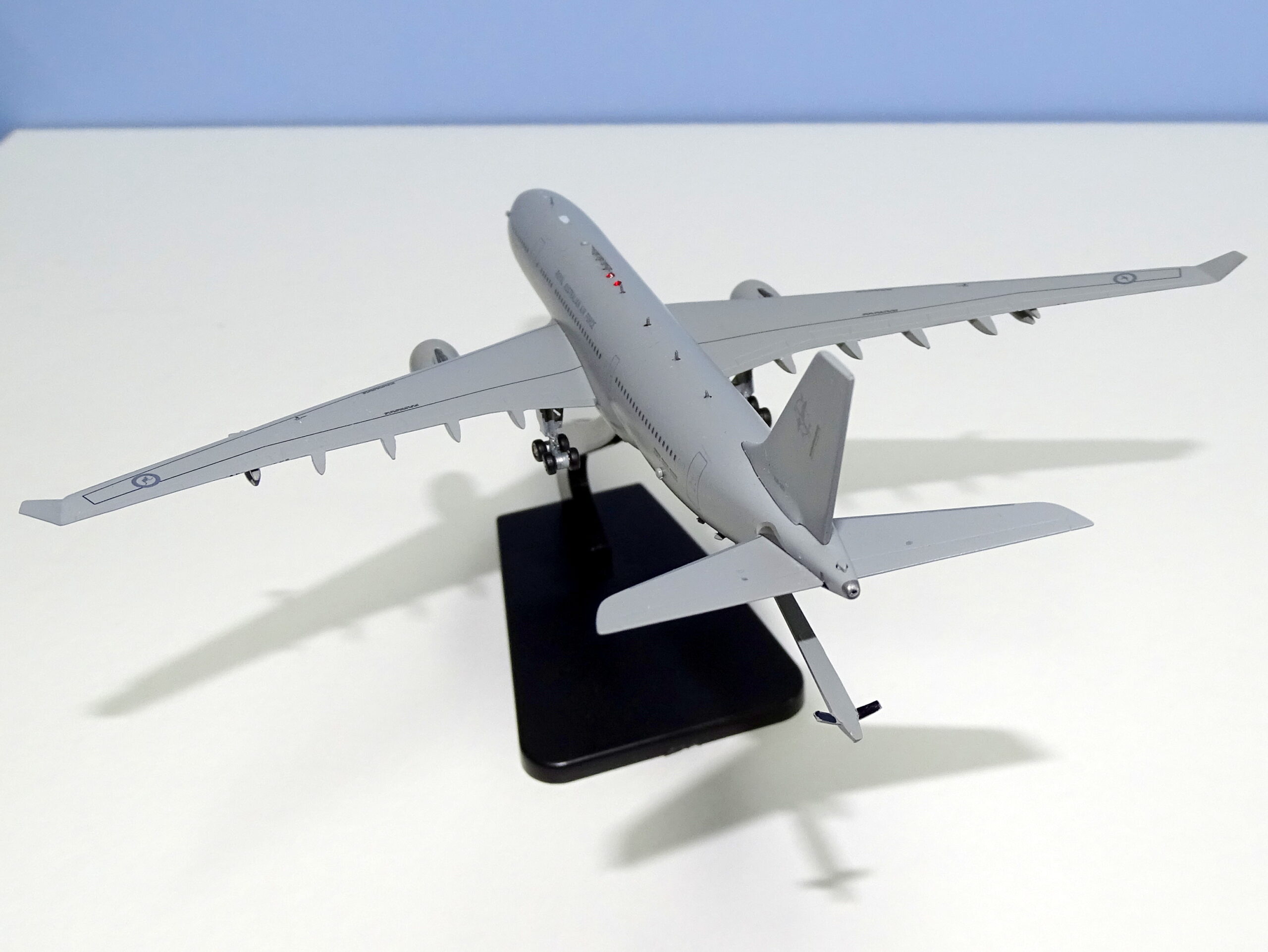 The shape of the lattice aerial atop the roof is about as fine as it could be in this scale and the underside bumps, which I believe contain the camera gear for the boom, are well shaped and fitted. Likewise, the long strakes under the forward fuselage, presumably containing ECM equipment, are very nicely moulded into the fuselage. 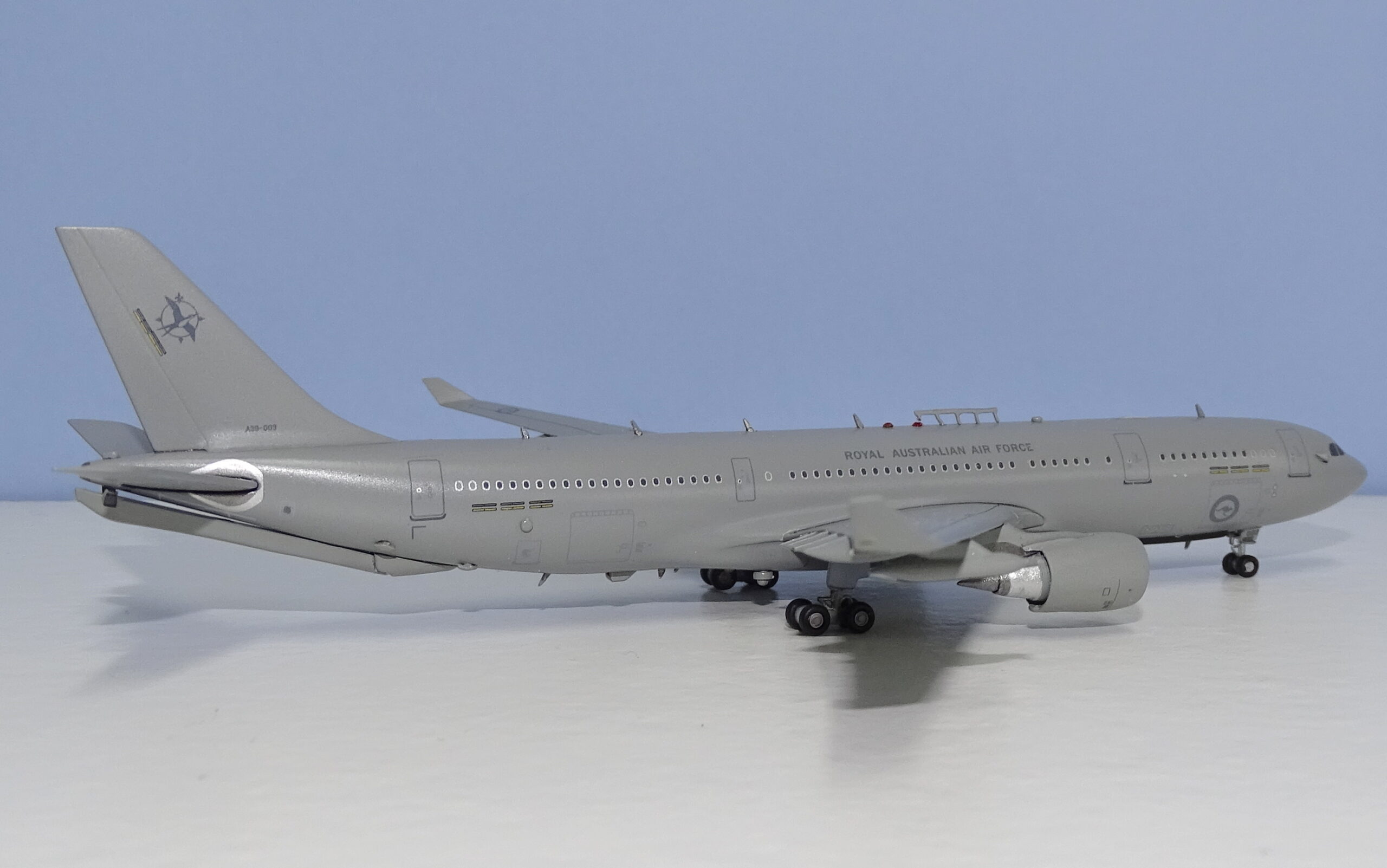 The overall effect of the additions is to turn a decent but ordinary A330 casting into a top class A330 MRTT. I admit that some of the rooftop aerials are not quite the correct shape (the first, second and third should be shorter and squarer) but given the level of detail across this mould that criticism seems harsh.

I have previously scored this mould as a 7 but I think the improvements even without the additions would merit an 8. The addition of so much extra detail easily gets this MRTT a 9. 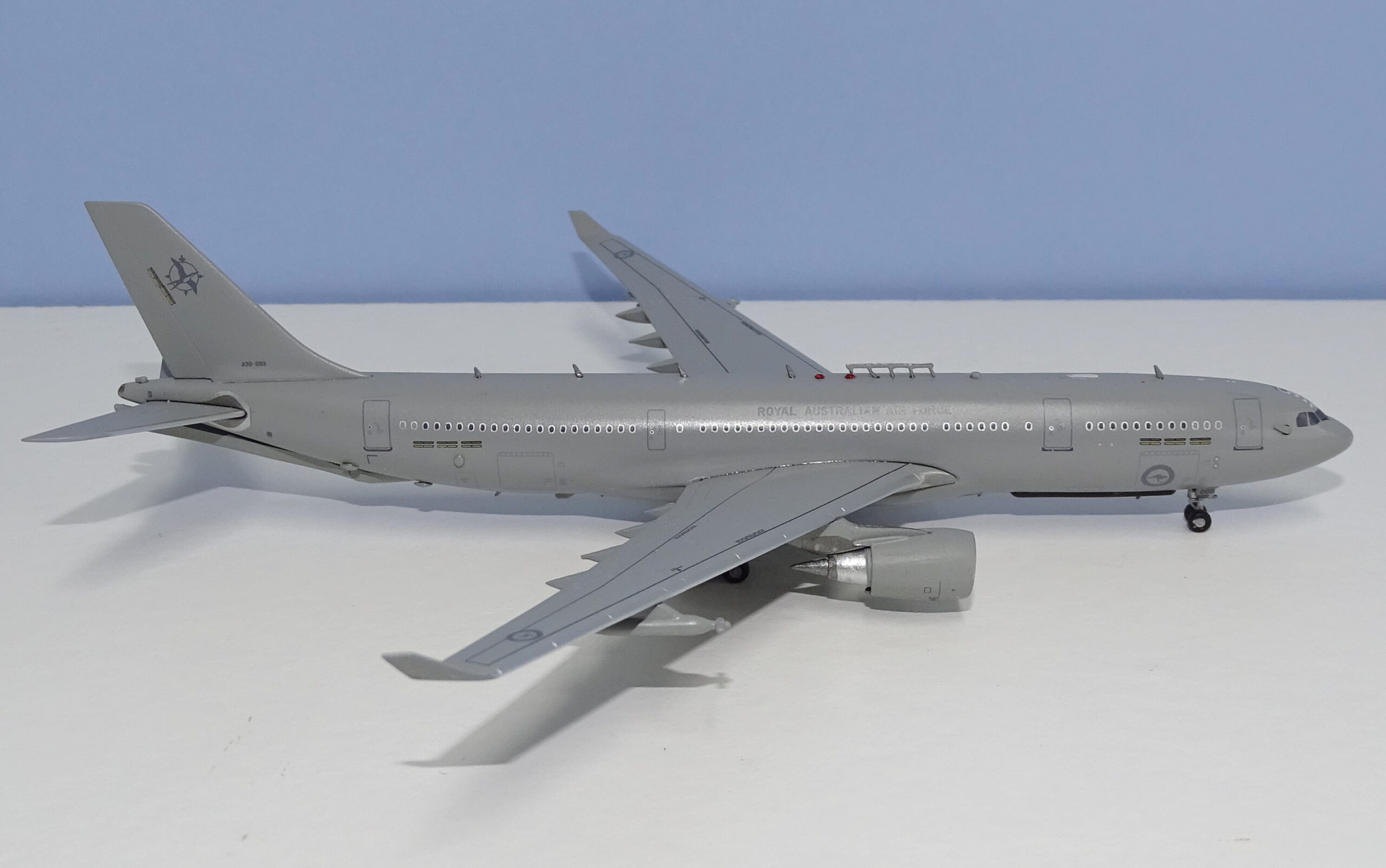 The all-over grey colour of the RAAF is barely a livery at all, but then again you could argue the colour-schemes of China Eastern, JAL and Finnair are barely liveries either! Nonetheless the maker still needs to look at and represent the detail, and there is lots to be had on this A330. 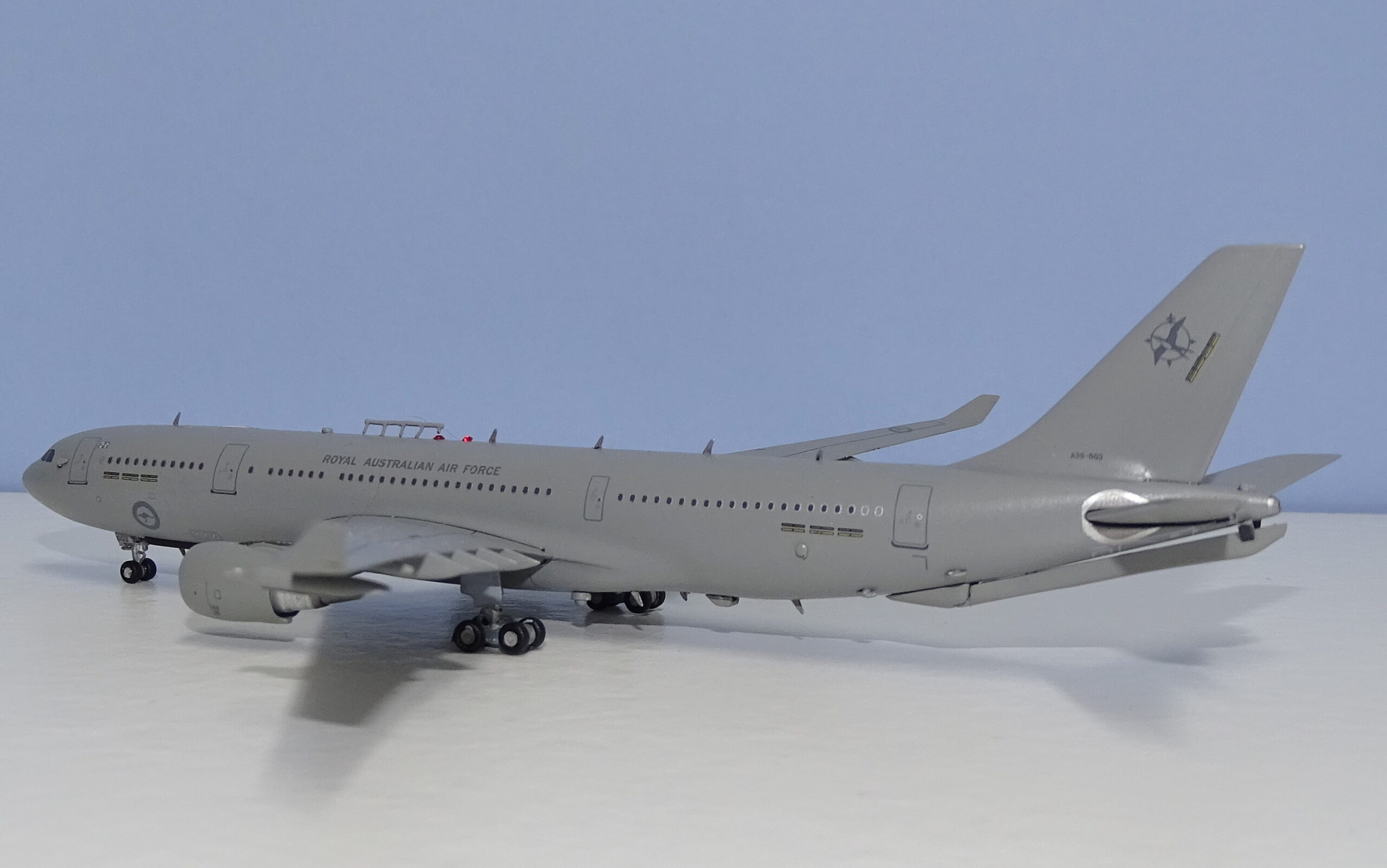 The overall colour AV400 have gone with fits the mid-grey of the RAAF well, as does the slightly darker grey used for the titles and logos. The text size and font of the main titles is accurate as is the size and position of the trademark RAAF kangaroo roundel on the lower forward fuselage. This roundel is repeated on both upper and lower surfaces of each wing.

On the tail the logo of a Frigatebird over a circle with the cardinal points on it accurately matches the crest of No 33 Squadron. Underneath the yellow belly stripe, outlined in red, looks great. The registration meanwhile sits on the lower tail – so small as to be barely readable.

This is a textbook application of ‘colours’ to a 1:400 model.

AV400 already are known for having strong printing capability and this is a model that demands that attention to detail. It is certainly not lacking. Two areas of particular strength are the aircraft’s own refuelling point above the cockpit and the extra detailing underneath the ARBMS itself. Other small print elements are delicate and finished perfectly. 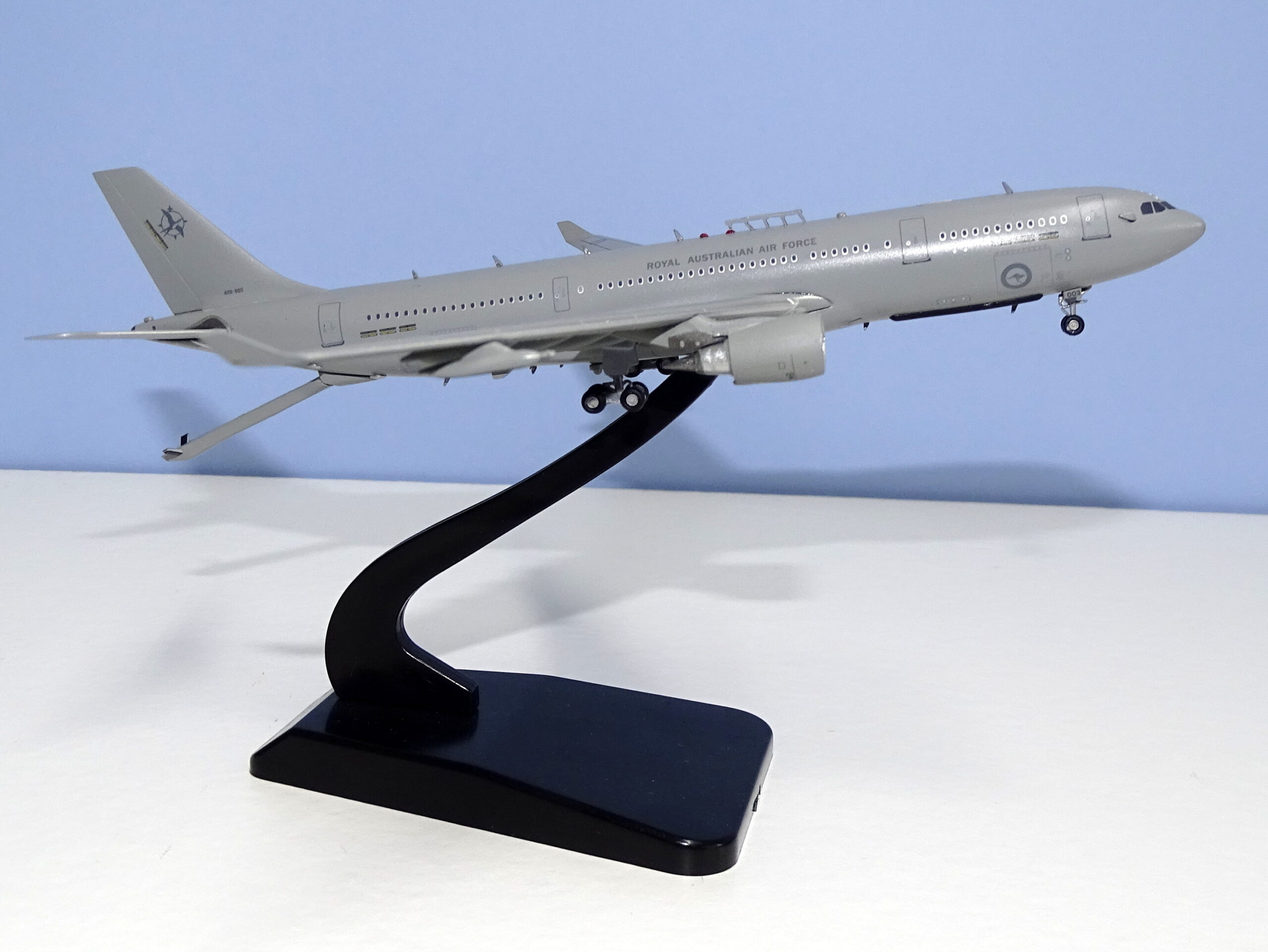 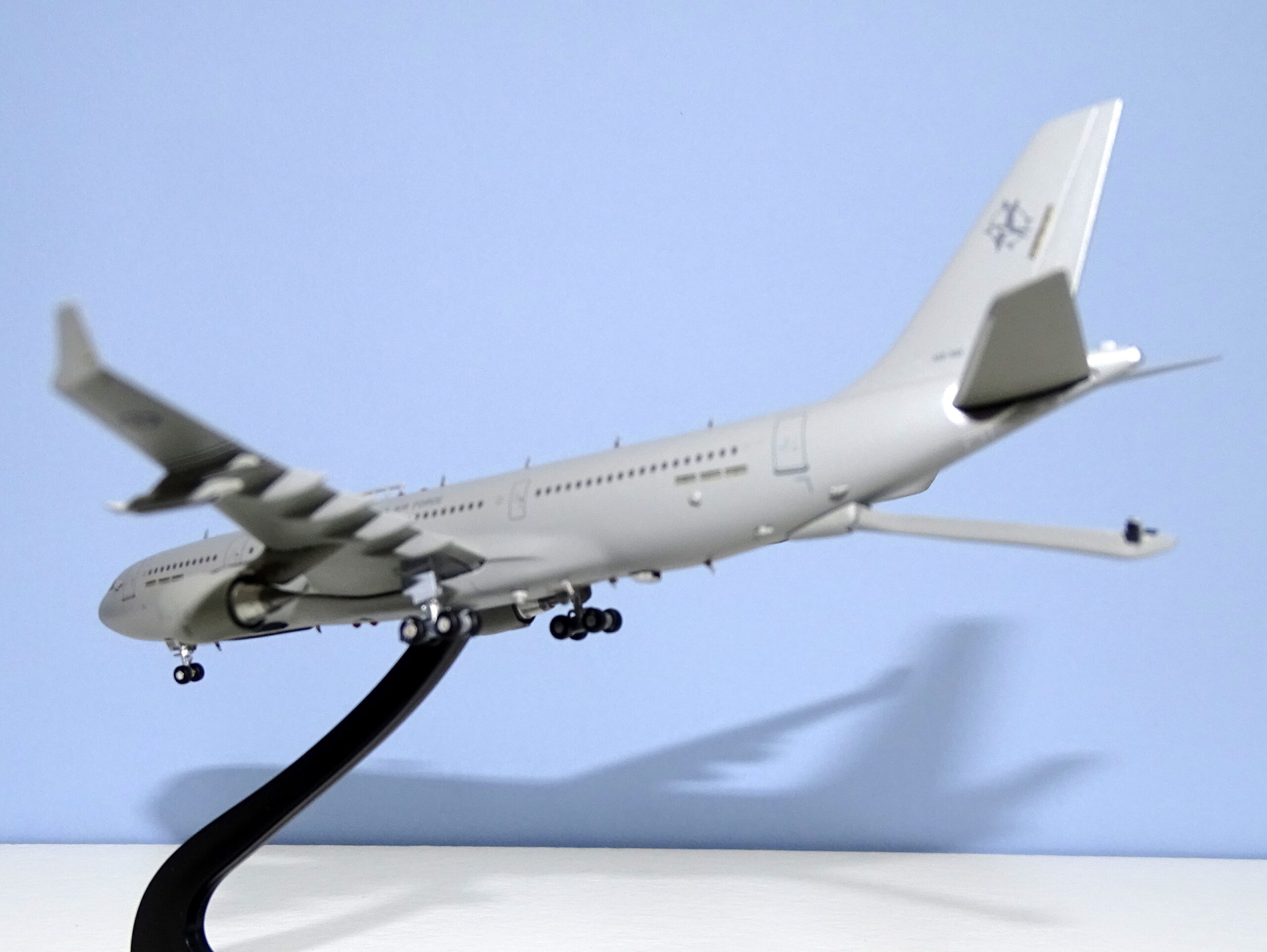 This is a model with over 40 separate parts and yet everything is fitted to perfection and nothing came off during the long trip from China to New Zealand. The attachment of the extra elements to the standard A330 mould is solid and professional. It is surprising how strong things like the ARBMS and lattice aerial are considering their size.

I am very impressed with this model. NG Models have been gaining all the plaudits of late for their moulds and printing but this A330 MRTT eclipses anything they have attempted so far in terms of the meticulous detail and special features. There is really nothing wrong with the model aside from the fact that the base A330 isn’t the best available in 1:400. Even so, this is a sublime creation and shows how truly spoilt the 1:400 collector is nowadays. Aviation400 continue to show that they deserve greater attention and more plaudits than they have received to date.