TF-AAK is a Boeing 747-400 that was originally delivered to Air France in March of 2003 as F-GITH. It flew with Air France until storage in 2015, when Air Atlanta Icelandic acquired the airframe and it entered service in early 2016. Up until this point, the plane lived a normal life as a commercial wide body airliner flying around the world. However that would soon change when it became a flying tour plane.

The infamous rock band, Iron Maiden, led by Bruce Dickinson, chartered the airplane for their Book of Souls World Tour in 2016. The tour spanned 35 countries and Dickinson, who is a commercial airline pilot himself, would pilot the plane. The plane was christened as Ed Force One to honor Dickinson and his aviation accomplishments, as well as the band’s mascot Eddie. 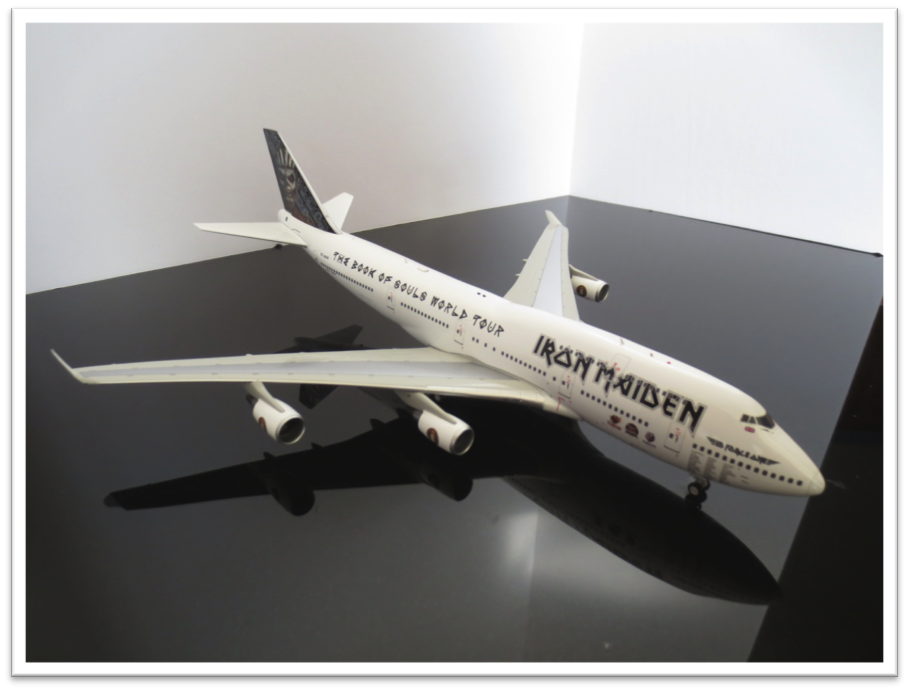 An overview of Ed Force One.

Inflight200 models are considered to be some of the best in the industry with their excellent molds, graphics, and impeccable attention to detail. This limited edition of the Inflight200 model of Ed Force One is no exception to these high standards produced by Inflight.

The first thing you will notice about this model, is its size and weight. The model is 13.75” long with a wingspan of 13”, and is made from solid die-cast metal. It comes neatly packaged in a Styrofoam box, with a cardboard sleeve that covers the box. Included with the model, is a sharp looking, solidly built stand, that requires some assembly and landing gear pieces. The landing gear on this model is in the fixed position, unlike some of the other brands and model types that allow the gear to be interchanged from inflight configuration, to a landing or ground configuration. This is an option that would later change in the Inflight line up, as its newest 747s have the magnetic gear and gear doors to interchange between the two configurations. I like this detail as its gives the model a whole new look with the gear in the retracted position. 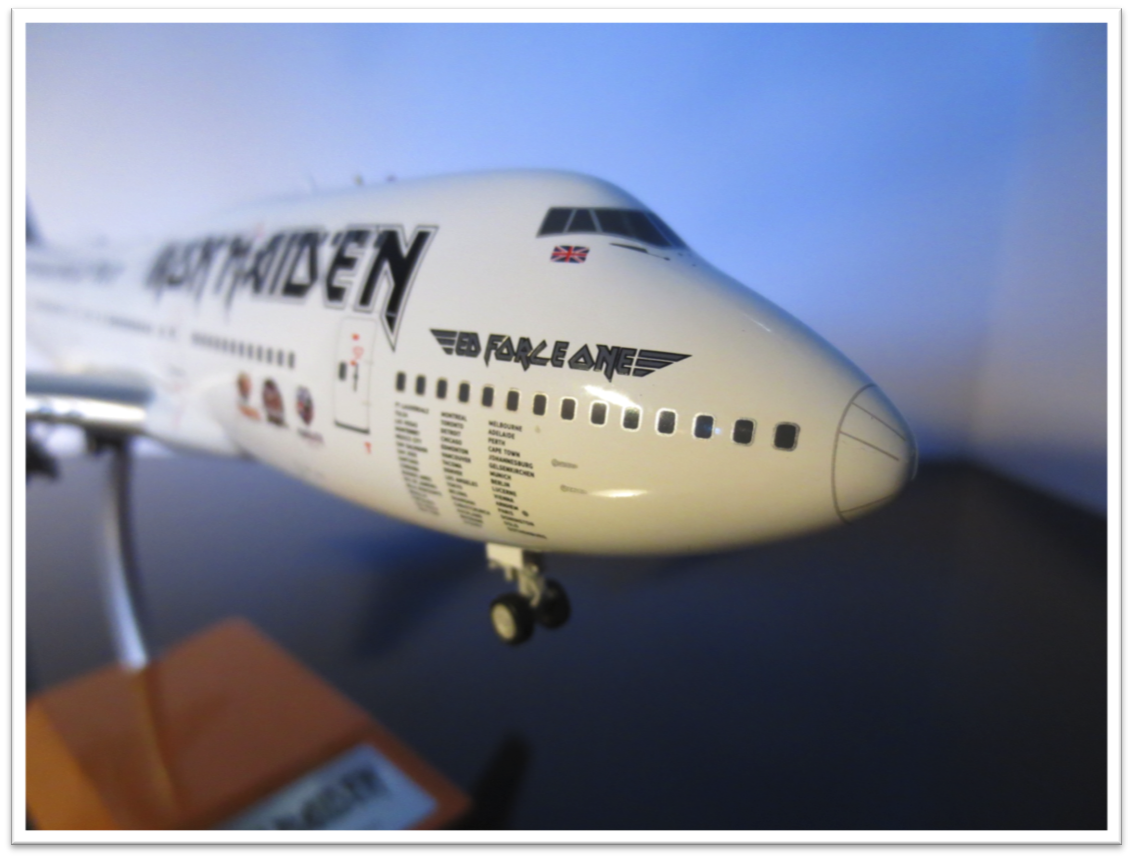 Let’s get down to the details of this model:

The overall mold of the Boeing 747 shows great workmanship and attention to detail. Inflight200 is known for their superior molds, and the 747 is no doubt, one of the best on the market for die-cast aircraft collectors. Inflight200 has perfected many aspects of the 747, including the famed 747 nose. That iconic symbol of the 747 from the cockpit section, down to the nose, is a thing of beauty on this model. Inflight has definitely gotten this right with the 747 model. Other manufacturers either have a nose that is too stubby, or often times droopy just below the cockpit section. The wing and fuselage meet in the center with little signs of manufacturing. There is a slight gap between the body and wing assembly underneath the second emergency exit door on the main level, but it is subtle enough and blends nicely with the contours of the overall airframe. It really is hard to come across any flaws with this mold. 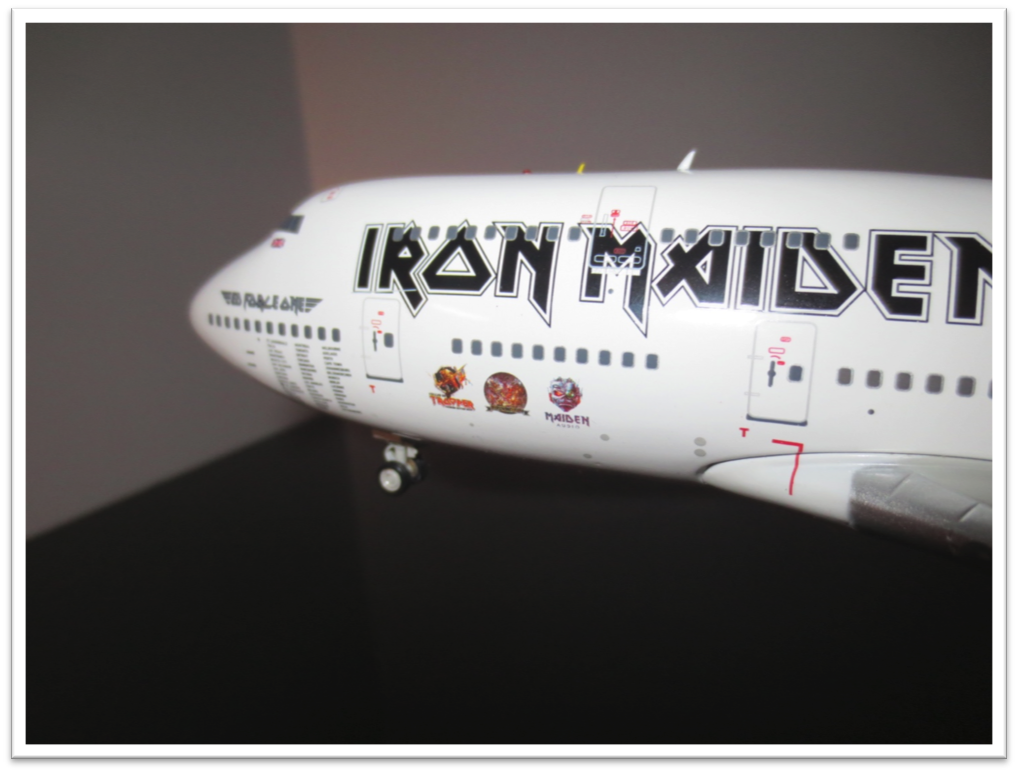 Assembly gap between the fuselage and wing. 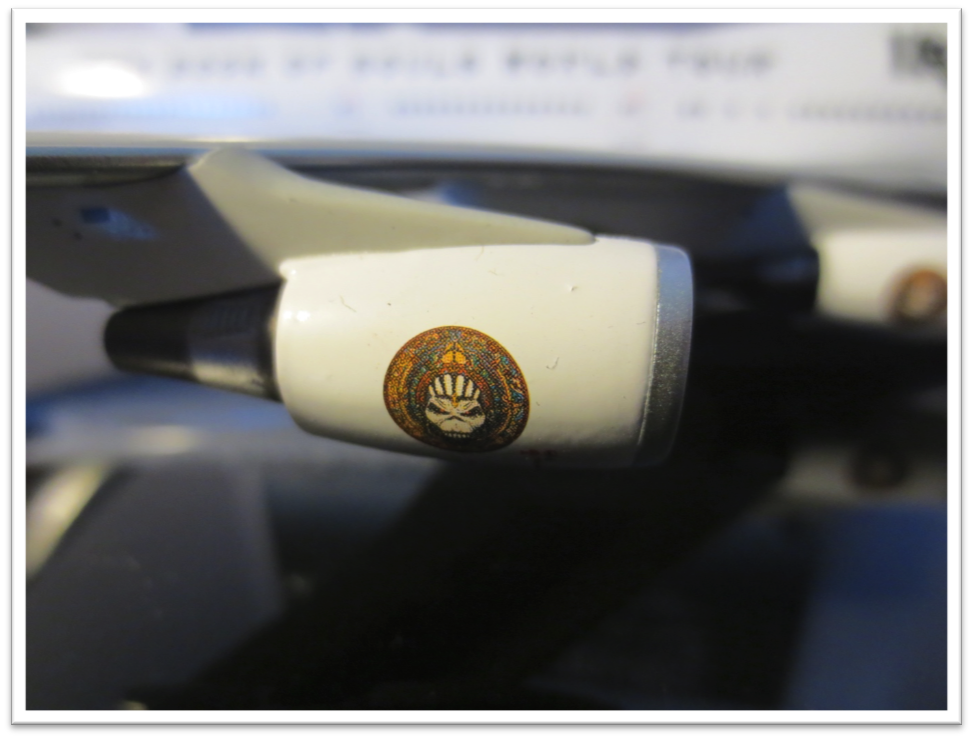 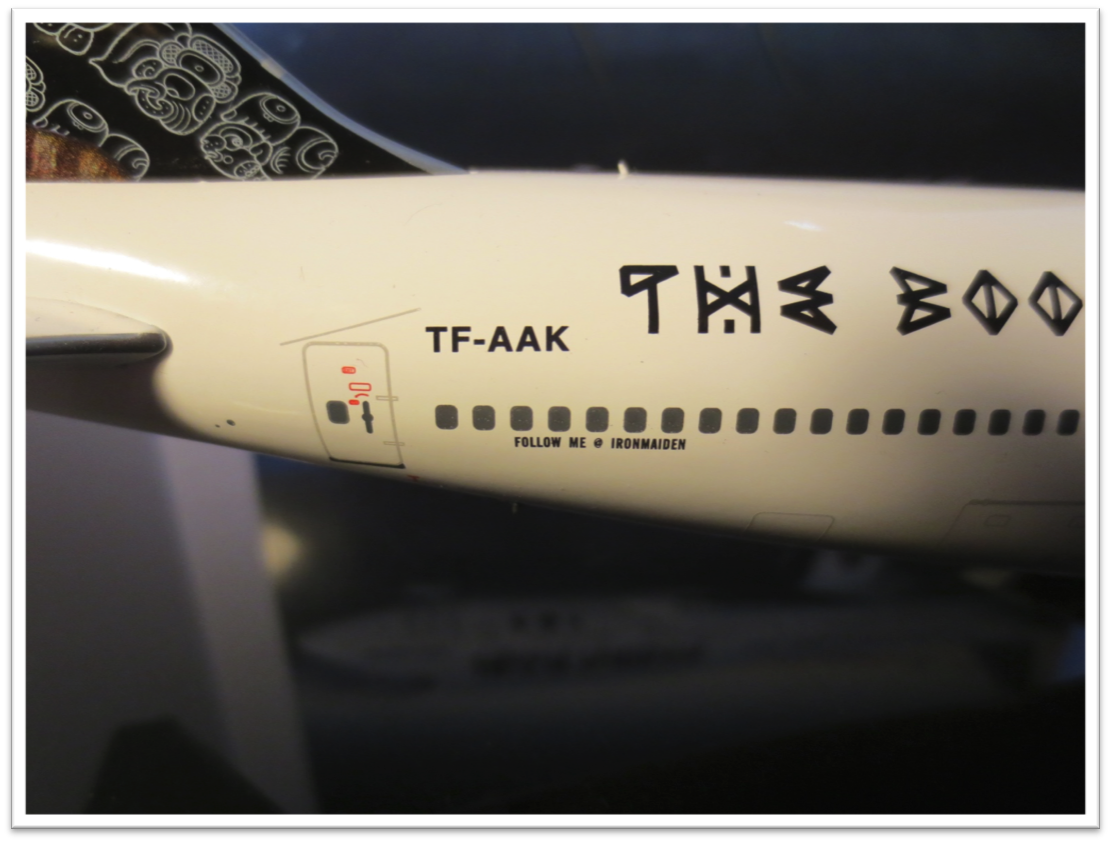 The painting and livery of this model are also excellent and true to the original form. The Iron Maiden font and size cut nicely through the windows on the upper deck and the promotional logos and names of the tour cities are perfectly placed. The fine detail that went into the promotional logos, engine decals and tail proves that a lot of thought and planning went into this model. The level of detail overall is incredible as well, going all the way down to the red warning stripes on the lower fuselage antennas. 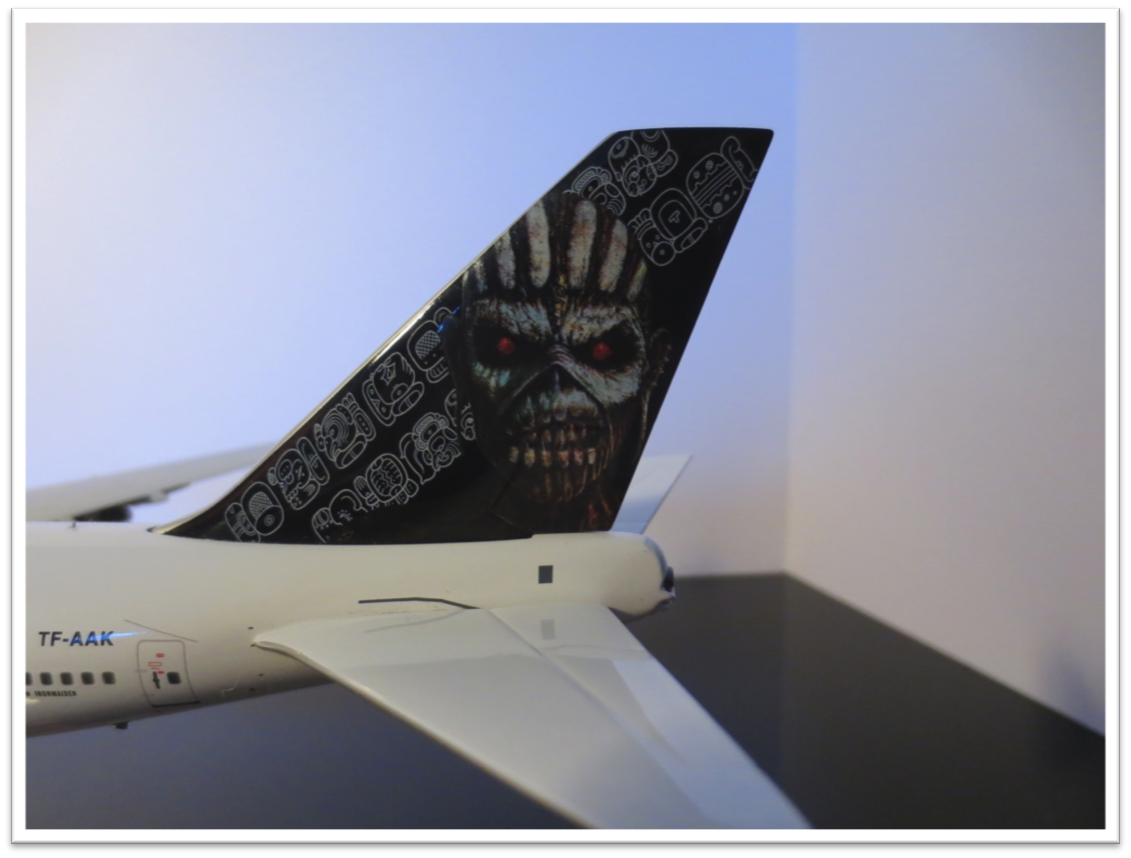 The overall craftsmanship of the model is excellent, as previously stated in this review. It really is hard to find any flaws with this model. The overall quality of both the model, packaging and box is top notch. My only complaint about the packaging would be the cardboard sleeve that goes over the Styrofoam box which has a tendency of being a tight fit. Over time, repetitive removal from the box could lead to wear and tear, especially around the edges. That is, however, a relatively minor detail considering all aspects of this model. 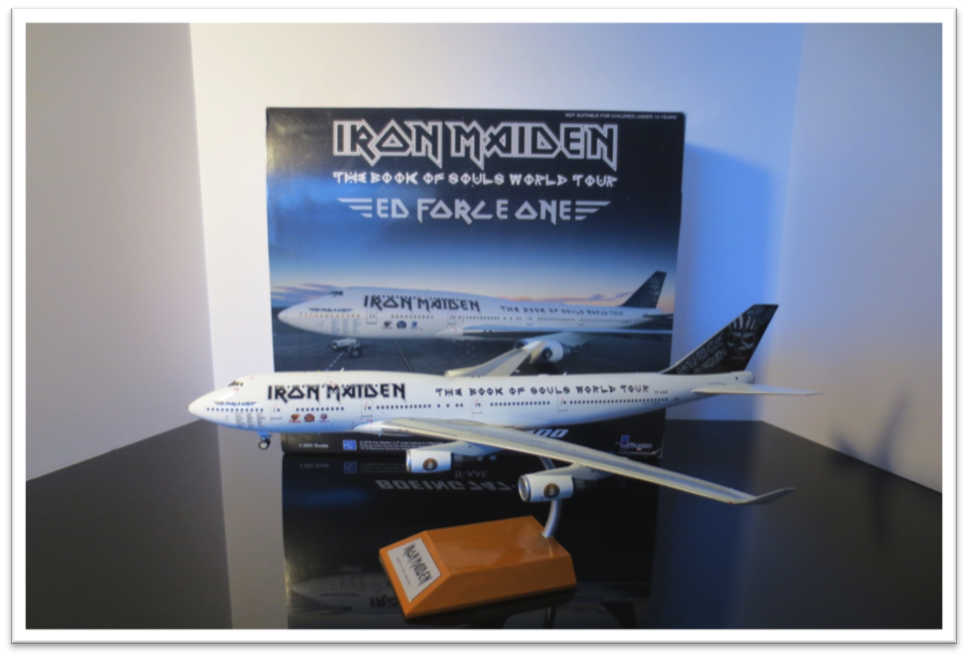 The model also comes with a stand.

I will be grading this model as well as future reviews based on a scale of 1-10, with 10 being flawless and 1 needing lots of work. Items I will be grading include, the overall mold and design of the frame, the paint and livery and printing and quality control. A perfect model will receive a score of 30 points.

So with that being said, this Ed Force One, Inflight200 model will get an impressive score of 28 out of 30.

I try not to review truly bad models often. Why? Well I have to pay for them for starters and then I have to dispose of them afterwards. Occasionally though I feel that I must […]