Aeroclassics has been spending much of 2020 filling in gaps in its releases associated with the first two decades of deregulation in the United States. This has meant a heavy dose of DC-9s and 727s, many of which have operated from Minneapolis at one time or another. The result has been some nice releases and pleasingly boxes from aeroclassicsdirect are some of the few that seem to still be getting through to New Zealand in good time. 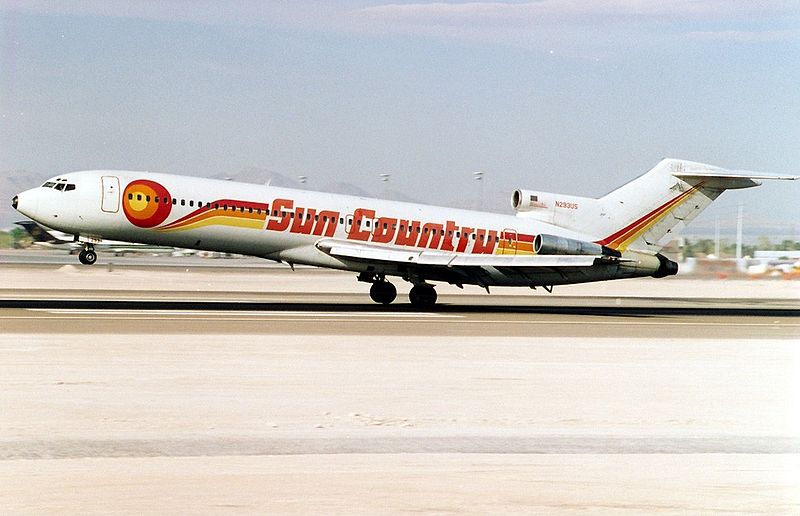 Although Sun Country has been through some desperate times it is a testament to the airline that it has survived despite living at Minneapolis St Paul under the nose of first Northwest Airlines and then Delta. There are no other deregulation startups that can match the longevity that Sun Country has achieved, despite it having gone through 6 different changes of ownership during its 37-year history.

Part of the reason Sun Country has survived is because, as its name suggests, it has primarily focused on leisure travel rather than business routes. The original Sun Country was entirely a charter airline and scheduled services didn’t begin until the 1990s. Sun Country itself was one of several deregulation startups that began using personnel discarded by other airlines due to their bankruptcy. Pride Air and Kiwi International are two others also started by employees of other airlines (Continental and Eastern respectively) but Sun Country got in first as it’s original staffing nucleus came from Braniff International.

The new airline was incorporated in July 1982 but getting the funding together delayed the first flight until January 1983. The initial equipment was a single Boeing 727-200 and the first route Sioux Falls – Las Vegas. The airline was quickly profitable and through a tough regime of cost-control remained that way during the 1980s, massively helped by its partnership with co-owners Mainline (who also owned MLT Vacations) who bought the seats and packaged them up into holidays it sold.

In 1988 ownership changed to a Minnesota Banker, John Barry, and the airline expanded, but this also led Sun Country into gradual competition with Northwest. By the early 1990s Sun Country was entering tougher waters as MLT Vacations had been purchased by Northwest Airlines and the latter had begun not only to start flying its own quasi-charter services (seats on scheduled routes) but also was making noises about not renewing facility and aircraft lease agreements Sun Country depended upon.

Gradually Sun Country and Northwest became competitors as the former moved away from the MLT partnership (which was a major factor in Northwest’s compliance) and in 1996 even started competing directly against its massive neighbour with discounted scheduled summer fares on routes such as Boston and New York. Ultimately this was unsuccessful as Northwest responded aggressively and Sun Country changed ownership again in 1997.

This pattern of periods of intense activity followed by an ownership change has occurred multiple times at Sun Country but the airline has nonetheless remained in operation and today is the eleventh largest airline in the USA. N293US was one of several ex-fleet members that demonstrate the previous close relationship between Sun Country and Northwest. Originally, she was delivered as a 727-251 Adv to Northwest on February 17, 1978 and joined Sun Country in February 1988. She remained with them until April 1994 and resumed service with NW, surviving until being stored in early 2003.

Back in the early days of 1:400 collecting the 727-200 was a popular type to be made and Gemini Jets and Dragon produced a large number of fine tri-jets, mainly representing US airlines. Nowadays Aeroclassics is the only manufacturer with a 727-200 that uses it regularly (although the last 727 I reviewed was a JC Wings / Gemini version). That’s a shame but the Aeroclassics 727 is a decent if not perfect version.

The nose of the Aeroclassics mould is good and the profile of the cockpit region also quite accurate. It is annoying that the cockpit window printing undoes some of this good work – see later section. This is a cradle mount mould so without slot in wings there is a seam join between the fuselage and wings. It follows the line of the wing join fairing bulge of the real thing but does stand out a little bit. At the rear the seam is not visible. It would be nicer if the mould was seamless here, like the Witty one, but I’m not too bothered. The rest of the fuselage and wings are fine. 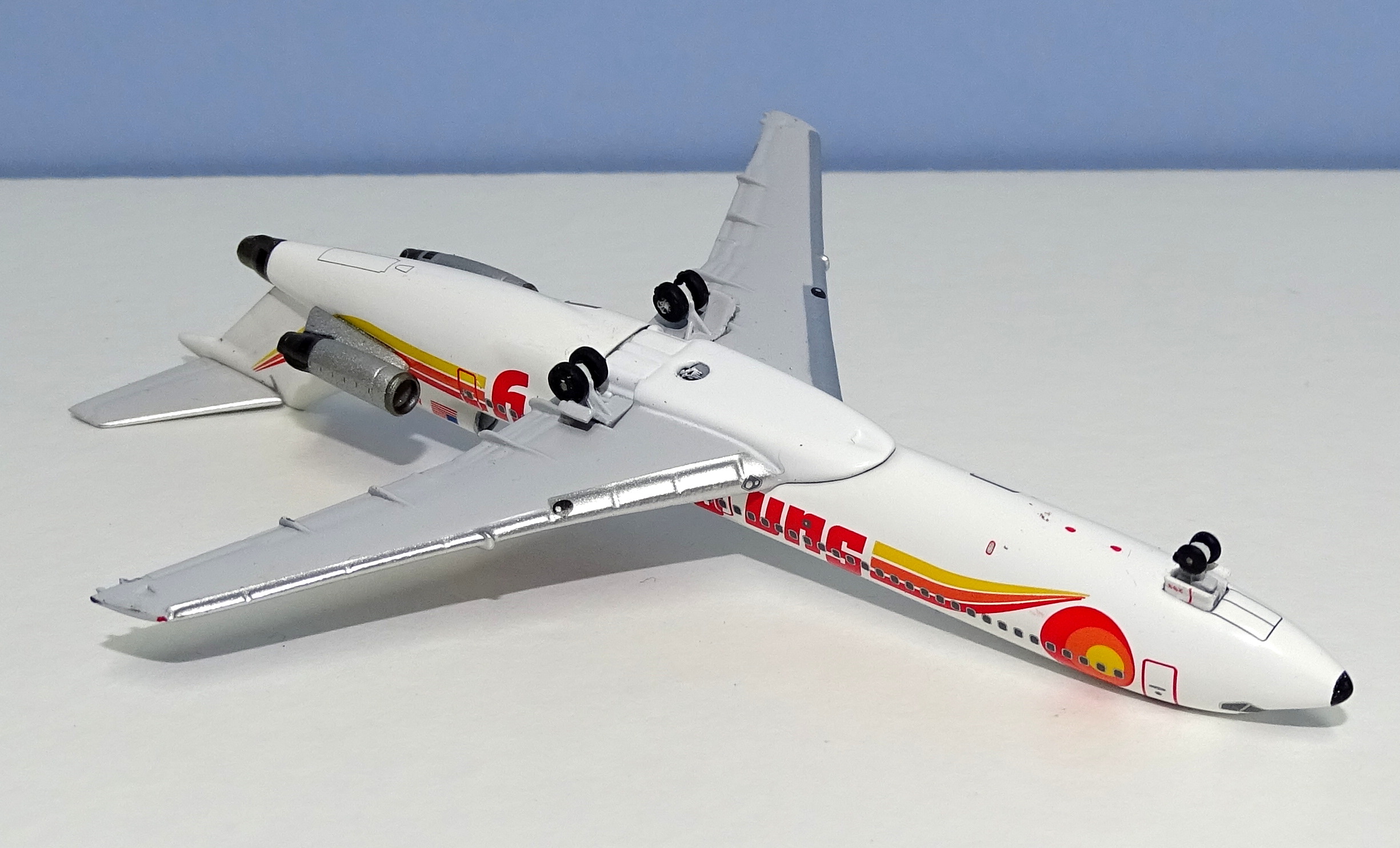 The maingear of the Aeroclassics 727 is excellent. The gear doors are a good size, well positioned and angle upwards correctly. The side engines are also very well shaped and have well detailed exhausts. The mould has been strongly criticised for its tail and it is the weakest area. Along the front edge it doesn’t quite angle up enough at the top. There is also a seam line where the horizontal stabilisers are fitted as one piece. The rest of the tail is pretty good but the number 2 engine exhaust is substantially too large. I am not sure why this has not been remedied since it seems like an easy enough fix.

On the plus side the mould has a well detailed rudder. Whilst admitting that the mould isn’t perfect it is still pretty decent in my opinion. Certainly, its weaknesses are not enough to rule it out for me, especially as it is nowadays the only game in town for a whole host of 727s I’m keen to see get made.

Sun Country’s initial livery was bright and attractive, as you’d hope for from a charter airline, but did rather lack a tail motif. Instead the centre of the scheme is the large sun at the front of the aircraft and the billboard titles, unusual for their time. Sun Country’s second livery would resolve the rather bland tail and move a modified sun onto the vertical stabilizer. It is also nice but I actually think I prefer this very 1980s original version. 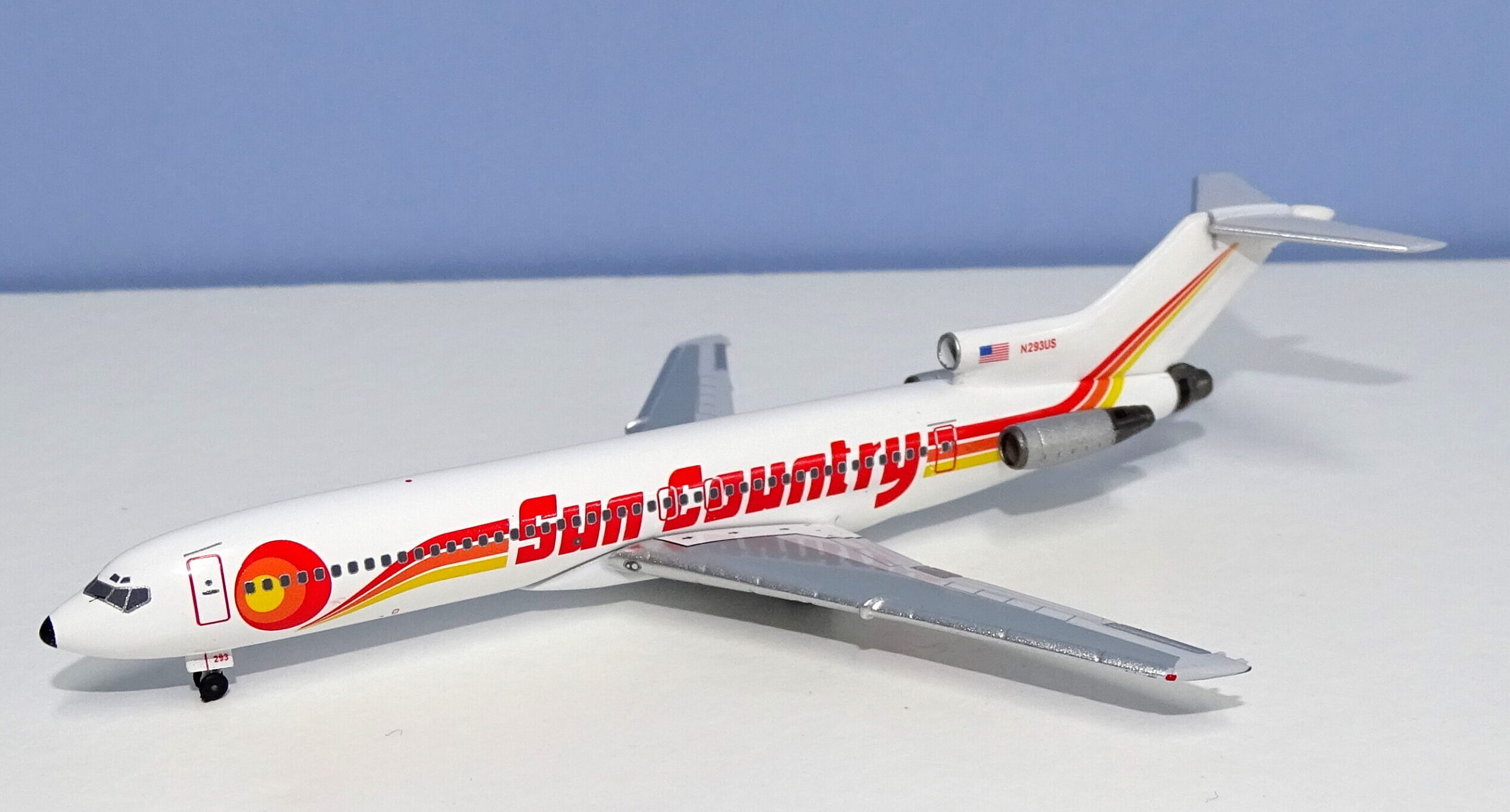 Surprisingly Aeroclassics haven’t gone too dark with their version of the livery. The main colours are a red, orange and yellow but even the red itself is quite light and I think Aeroclassics have done a decent job on it.

There are several good photos of Sun Country 727s, including this exact airframe, on Wikipedia so there is plenty of reference material. As I often say with Aeroclassics liveries the designer has looked at the images but not closely enough to avoid some detail error. There is certainly some variation between different 727s in this scheme with this shot of N283SC showing more angular striping and a different font in the t of Country. N293Us did not have these features so the model gets a pass in both these spots.

What all photos do show is that the lines angling down to the underneath of the sun symbol do not stop at a straight point but actually curve underneath the sun almost as if they are holding it up. This is not reflected in the model where the three stripes just end in a straight point.

The rest of the scheme is carried off well. The tail striping is fine, the US flag on the no 2 engine is good, the rego is red and the nosecone has a small black radome tip. Not all Sun Country 727s had the latter feature but this frame sure did. 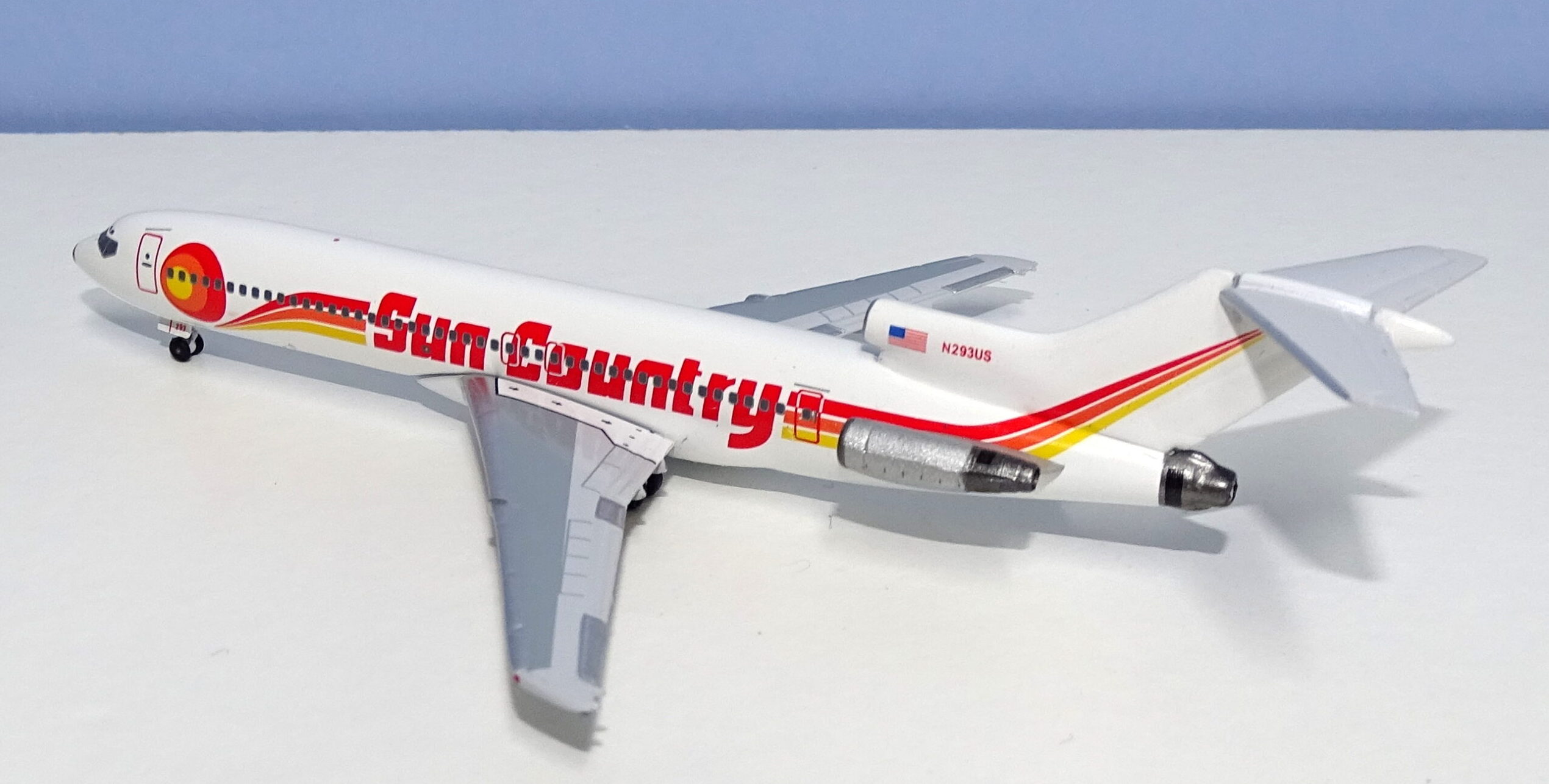 Aside from the cockpit, printing on this 727 is fine. Aeroclassics print on the extra flap details on the overwing, which look good. I do wish however they’d continue this line work onto the tail, which could do with some more rudder outlining.

The cockpit windows remain a recurring area of concern with many Aeroclassics 727s (though not all). The stern look present on some models at least seems to have been banished but the standard print template for the windows is not accurate. The windows are too deep at the side. It’s not awful but in concert with not being printed quite level (the left side is lower than the right) it doesn’t look quite right.

Construction of the model is very good, although it would be nice if Aeroclassics painted the insides of the engines. The fanblades on the numbers 1 and 3 engines remain unpainted plasticky light grey.

Since the mould only gets a 7 it is a challenge for Aeroclassics 727s to score highly even though on the whole they are good and nice additions to my collection. In reality this model has only lost a single point due to the fact it is a Sun Country release and the other 5 points due to issues that Aeroclassics just isn’t interested in resolving. At the end of the day you know what you’re getting with Aeroclassics – like it or lump it. As the score says this is a workhorse release.

In this segment of our Airport Spotlight Series we venture to Poly 500 Intl. Airport, a fictional 1:500 scale airport that has been well designed with plenty of neat features.